I was going through some old photos and came across this one of the former empty lot on the NW corner of 2nd Ave and 1st St: This was taken in July 2006 and was just about to be developed.  My comments from the time:


This is a photo of a building set for demolition with a sign in the foreground that advertises the new building that's going to replace it. I thought the old building looked pretty ghostly and the way the sign is super-imposed in front of it is rather creepy.

As I took the photo, a man in a suit came up to me and commented that it will be great when the new building goes up. Having just seen its twin block out the sun on the south side of the street, I wasn't too enthusiastic. He went on to say, "I don't care about the area, I mean, it's the Bowery."

The glass box building on the sign has indeed been built and I have yet to see any life in it - either upstairs in the apartments or in the commercial space on the ground floor.  I miss the empty lot with its grass, wild flowers and giant black and white Neck Face claw that used to adorn the north wall.

Anyway, I was curious to know what the corner looked like before the empty lot and found the following photos.  The first is looking north up 2nd Ave and is not dated: 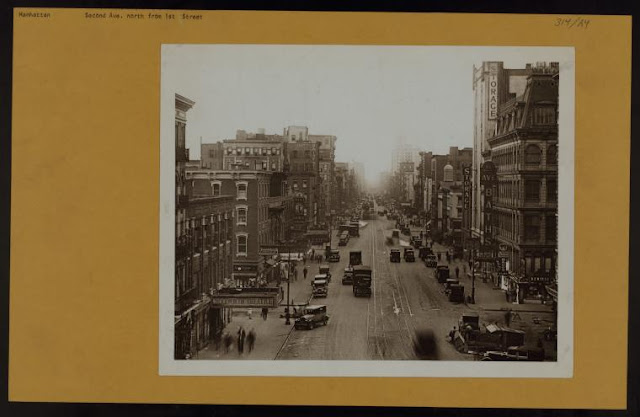 The NW corner is occupied by a hotel and, note the Woolworth Theater half a block south, next-door to what is now Mars Bar.    The storage building on the east side of the Avenue is still there but, sadly, the gorgeous 2nd Avenue Baths building is now the location of the gast station. 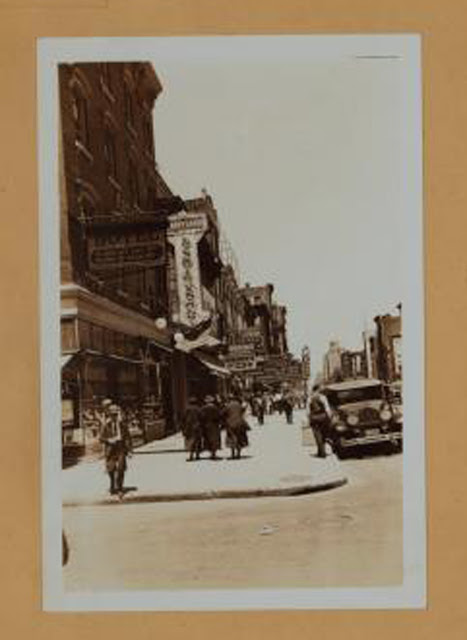 Image credits: New York Public Library
...we can see that the hotel offers rooms by the day for $1 and by the week for $5.  Last I checked, rents in the new building were starting around $2K per month.

I guess the upside is you don't have to walk across the street for a bath...
Posted by Goggla at 11:53 AM