Neither bird spikes nor plexiglass will keep Christo and Dora away from their chosen nest location.

This was the scene at the Christodora today: 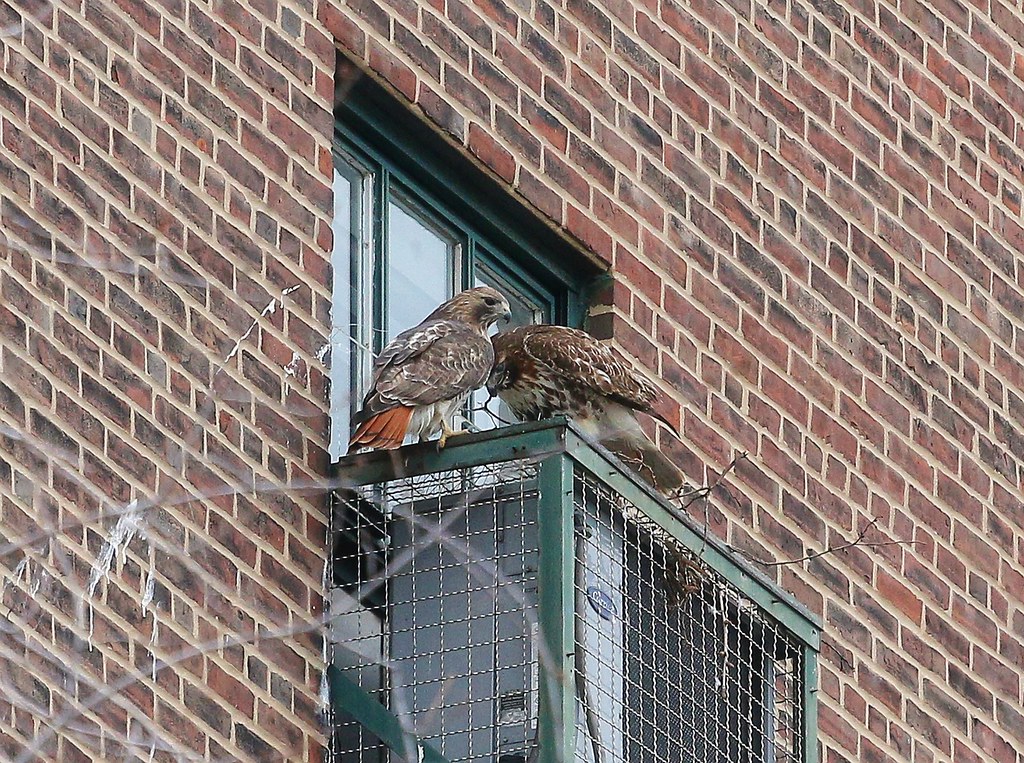 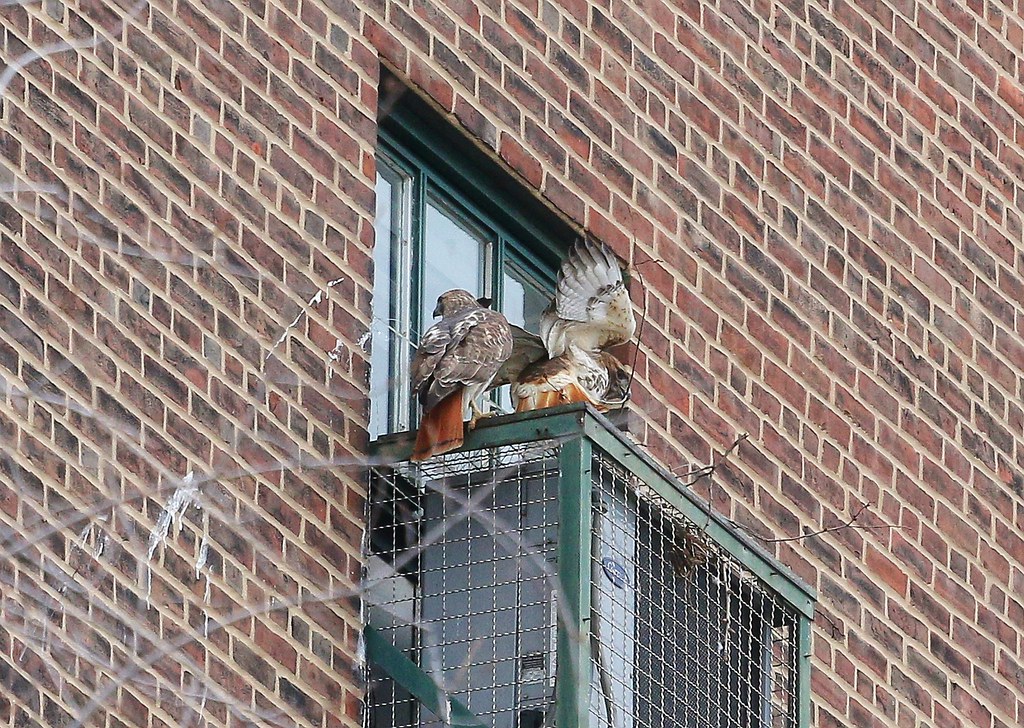 Under normal circumstances, this would be a happy occasion, but I was not pleased to see this.  It means the hawks are still determined to build their nest here and don't seem to be working on finding an alternative site.  Granted, they struck gold when they found this place as it's perfect in so many ways for a nest, but as the building is about to undergo some major construction, this is not good.

The plexiglass solution is just not working.  You can see the glass here at a slant to the left of Christo. 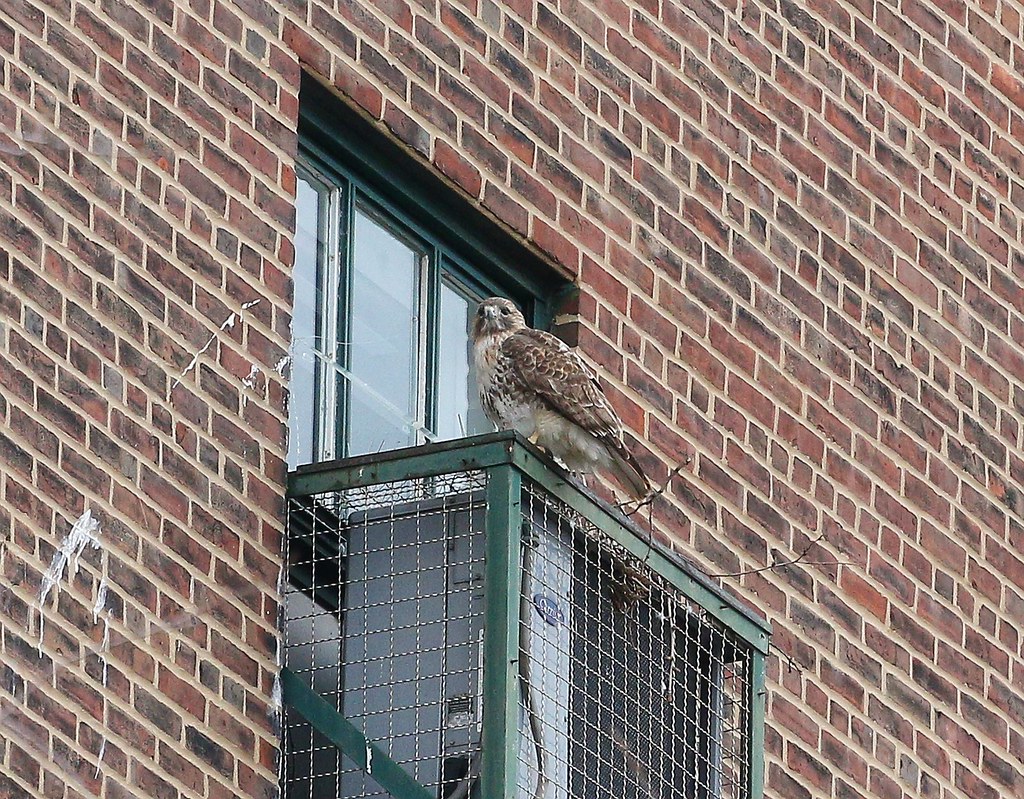 I'm not an authority on this, but maybe it would be a good idea to either cover the entire a/c surface or put something out there like a family of plastic owls.  I'm worried the birds will waste their time and energy on this nest location, and could get hurt in the process.

In other news, I found Dora in hot pursuit of an intruder yesterday.  At first, I thought she was chasing pigeons down Avenue A, but she made a strange high-pitched chattering cry and performed some acrobatics over 7th Street. 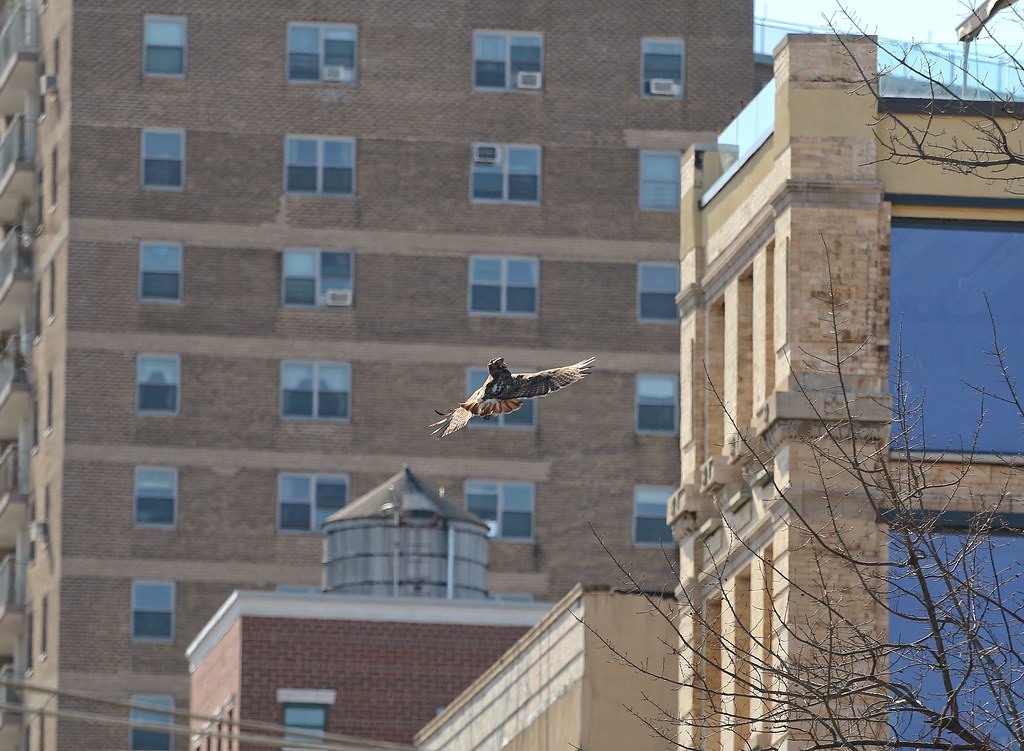 It turned out she was looking up at a juvenile hawk, who can be seen sailing past her at the upper part of this photo. 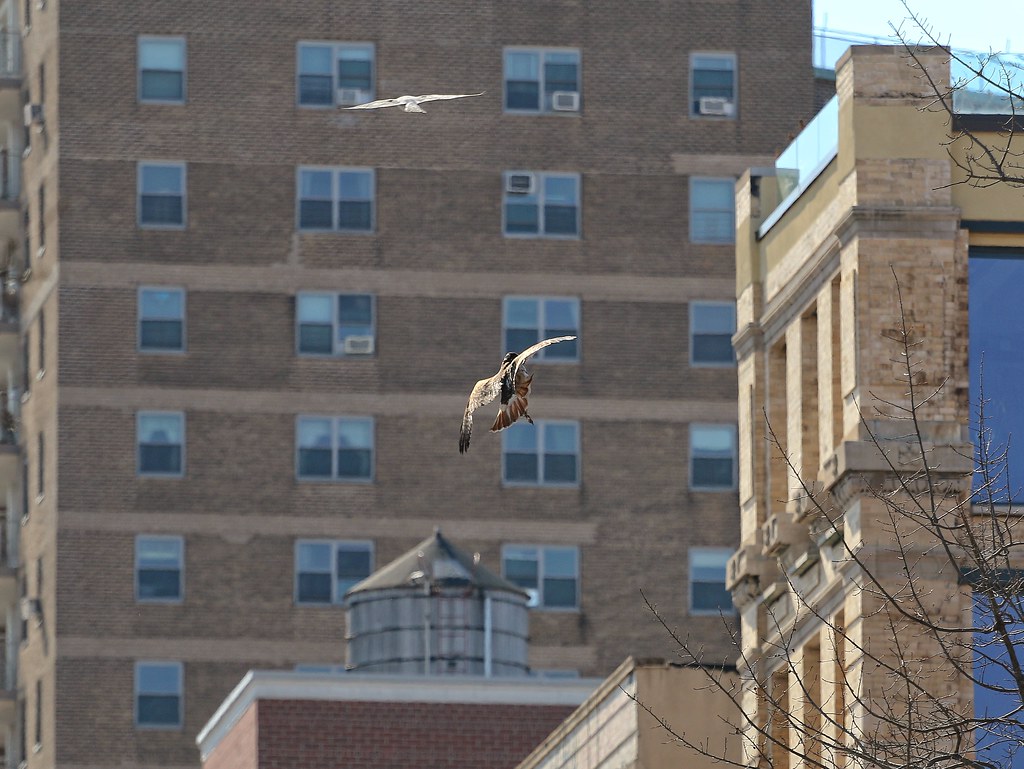 She and Christo both patrolled this block for a while, then chased what I assume was the same juvenile (it could have been a different one) around Avenue B & 7th Street.

Near the end of the day, Dora disappeared (I've never discovered where she goes) while Christo stayed in the park to hunt. 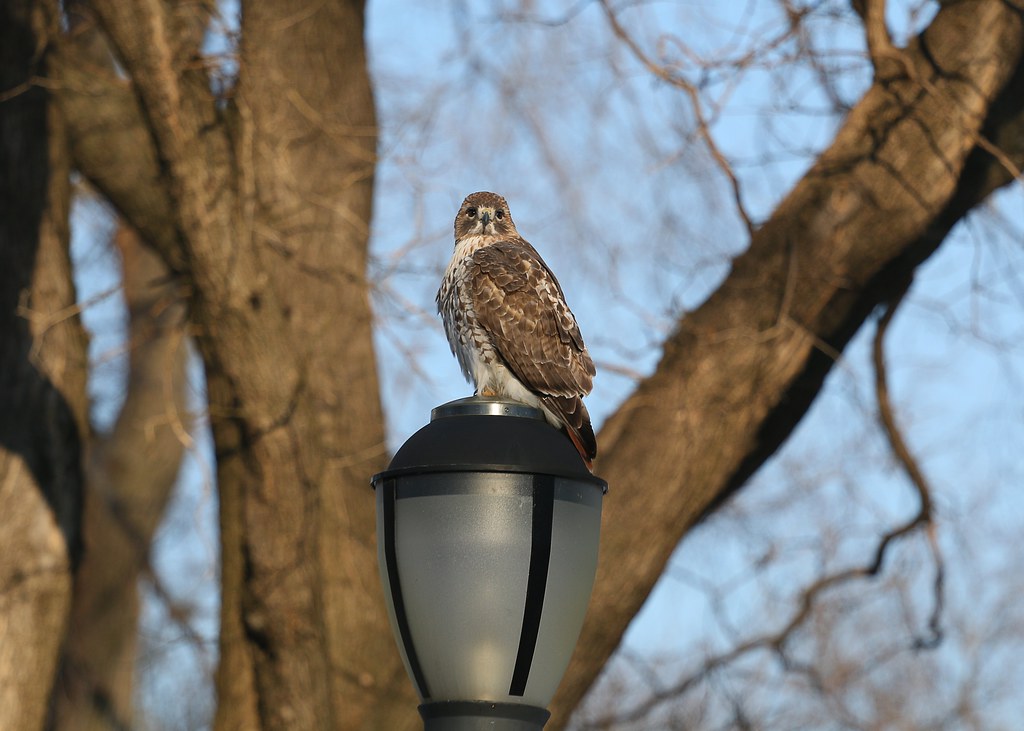 Finding all his food frozen, he settled for Fresh Direct. 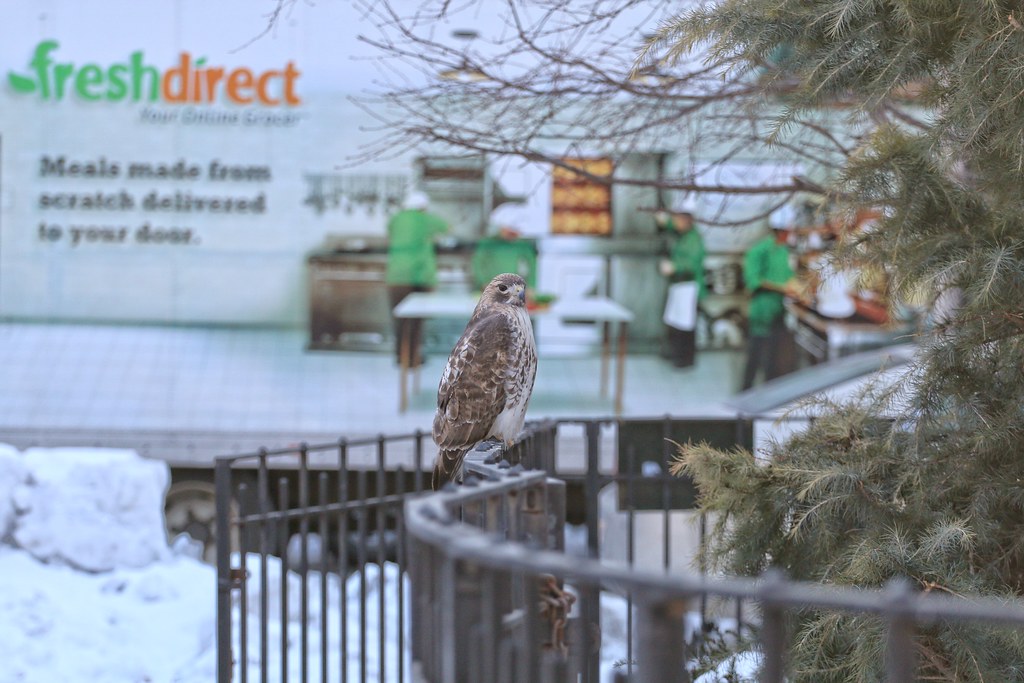 The sunshine is deceiving as it was about 4 degrees and my hands were frozen. 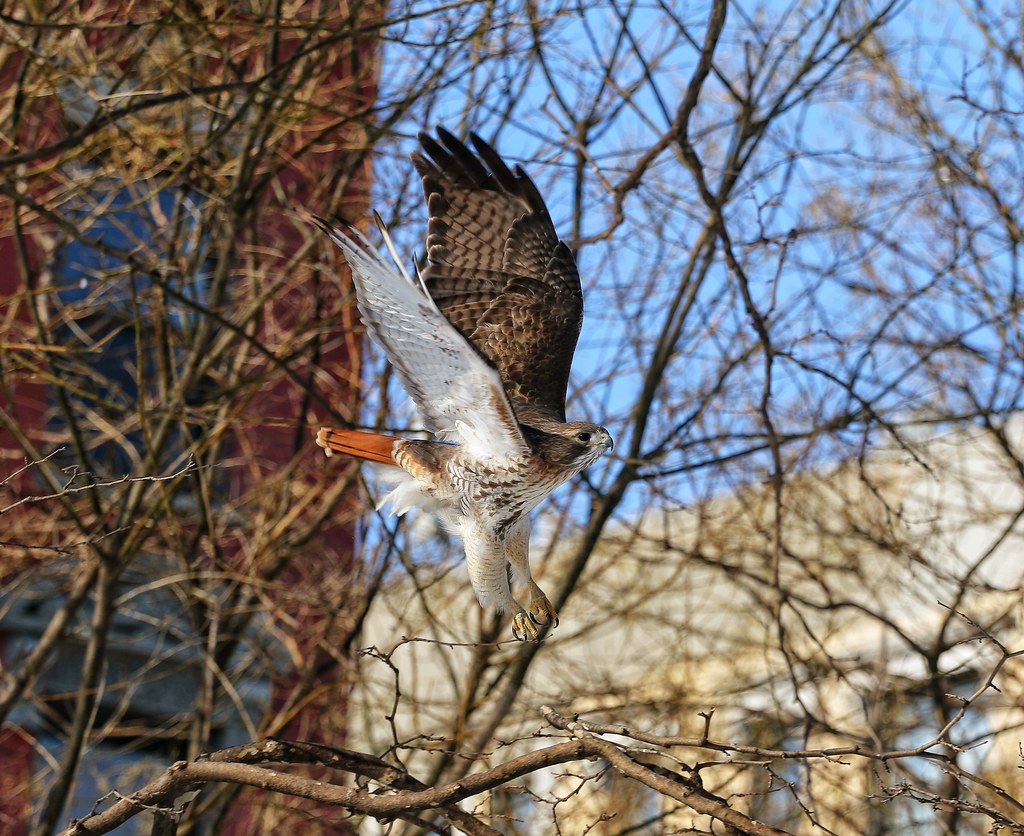 Cold is no problem for the hawks, though. 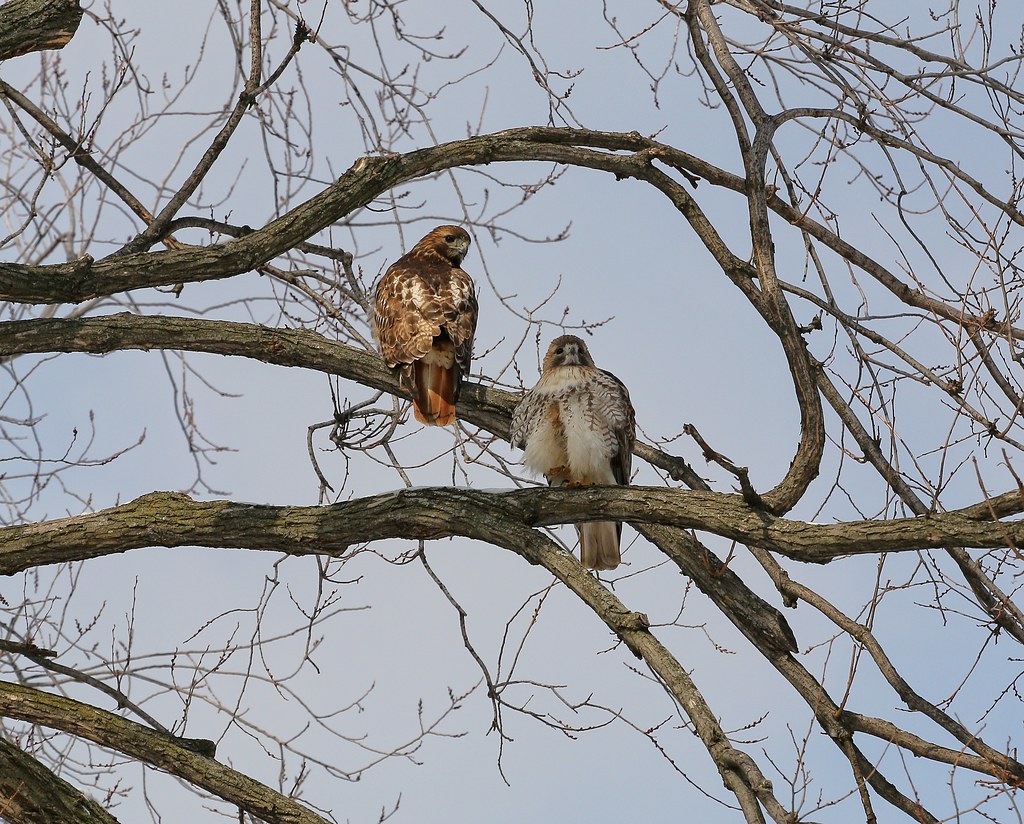 Dora on the left, Christo on the right.

I'm hoping something can be done to dissuade the birds from continuing with their nest-building on the Christodora so they have time to find a suitable site.  If anyone sees them taking sticks to any other location, please let me know.

Previously.
Posted by Goggla at 8:51 PM