Ray:  Hey, where do these stairs go?
Venkman:  They go up! 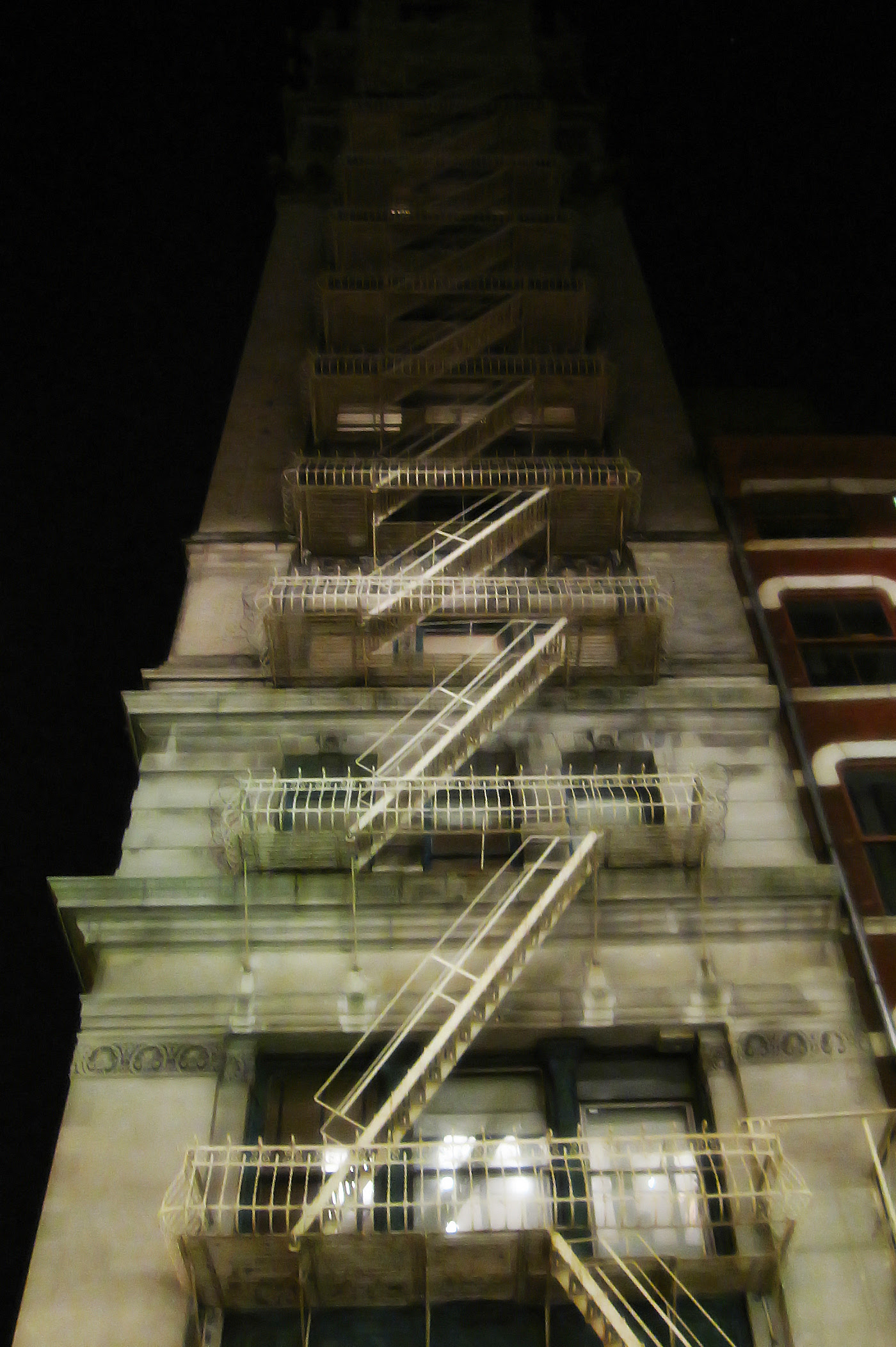 Posted by Laura Goggin Photography at 11:11 AM 3 comments:

Have a happy Thanksgving, everyone! 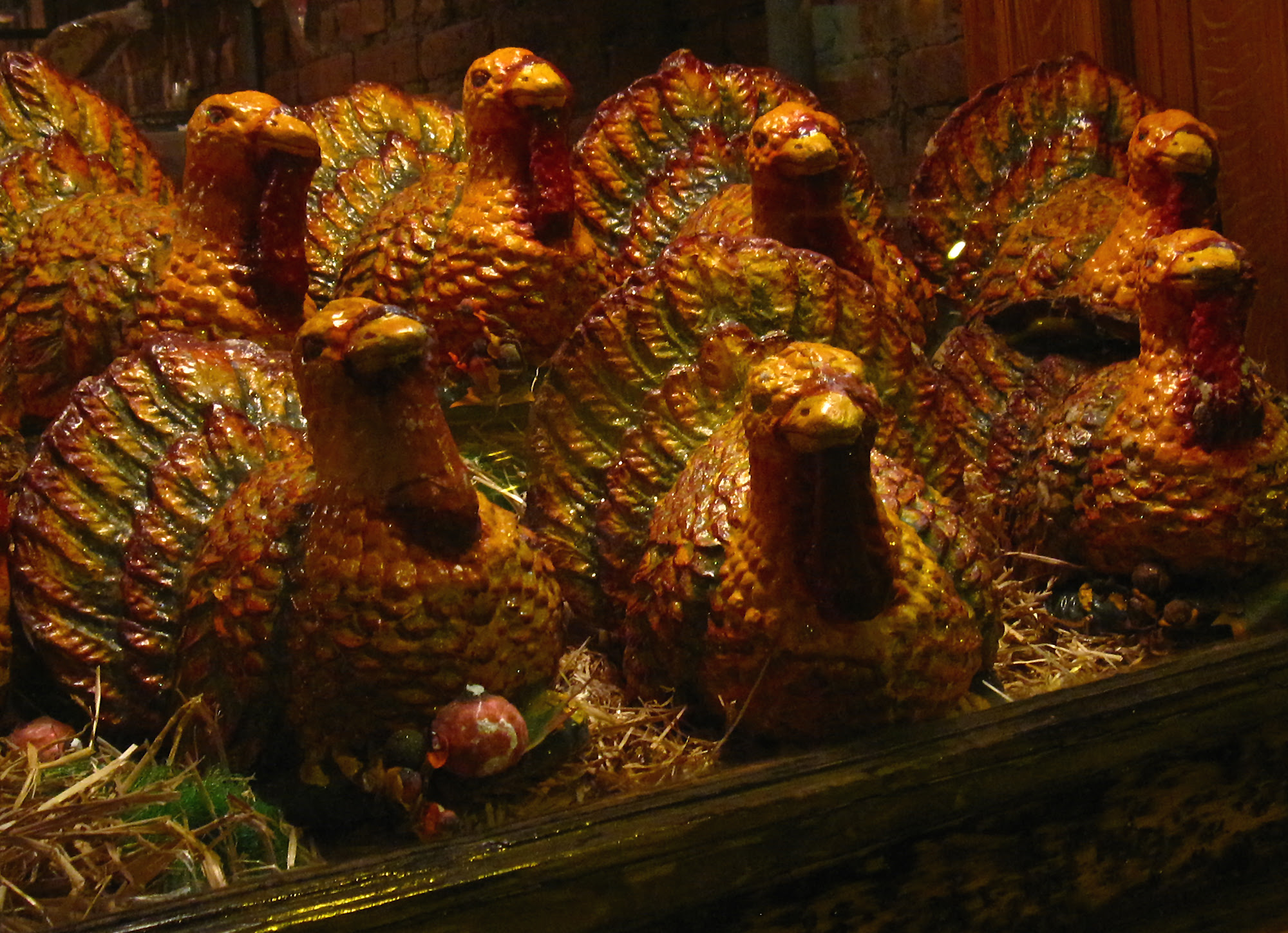 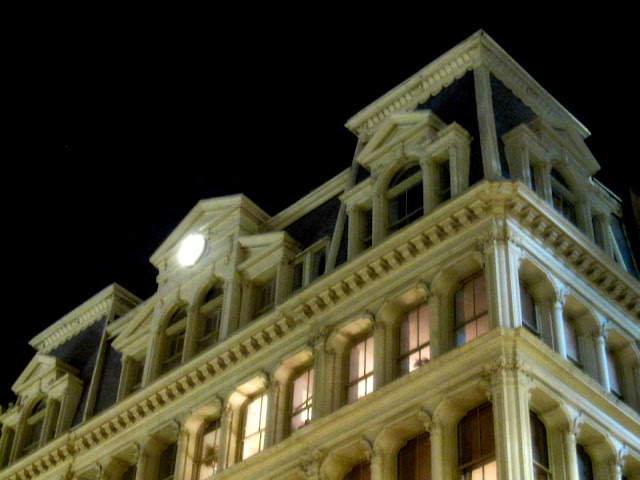 Previously...
Posted by Laura Goggin Photography at 11:35 AM No comments:

Friday and Saturday nights in the EV mean avoiding the drunken puke-fest outside by locking myself in the apartment and throwing a party for myself.  This last weekend, the guests of honor were Iggy Pop and The Stooges.  We stayed up all night and had a roaring good time.

And, those big beautiful eyes, bright smile and amazing voice have not changed a bit in 33 years...
Posted by Laura Goggin Photography at 9:42 PM No comments:

A lovely morning on 5th St, between 1st and 2nd Aves. Posted by Laura Goggin Photography at 10:45 AM 2 comments: 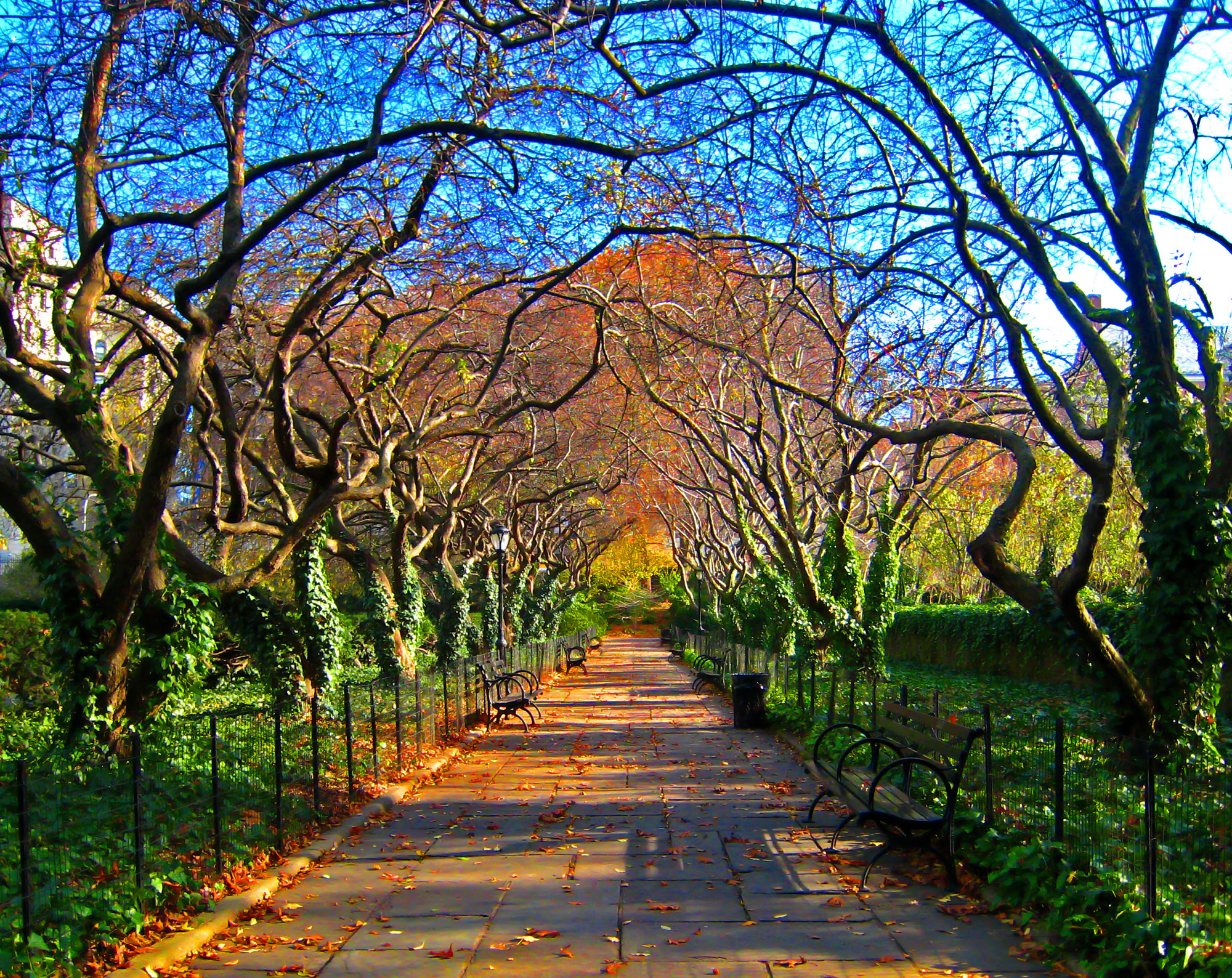 Posted by Laura Goggin Photography at 10:32 AM 3 comments:

This last Saturday was supposed to be the last day for Ruby's Bar & Grill at Coney Island.  As the demise of Ruby's is symbolic of the last nail in the coffin for all of Coney Island, I felt I had to be there.

I was happy to see a large crowd gathered outside, despite the cold wind and almost nothing else being open on the boardwalk.  It then dawned on me that I've never been to Ruby's in November, nor without a costume or covered in sand.  And, although this was supposed to be a final goodbye, people seemed to be in high spirits. 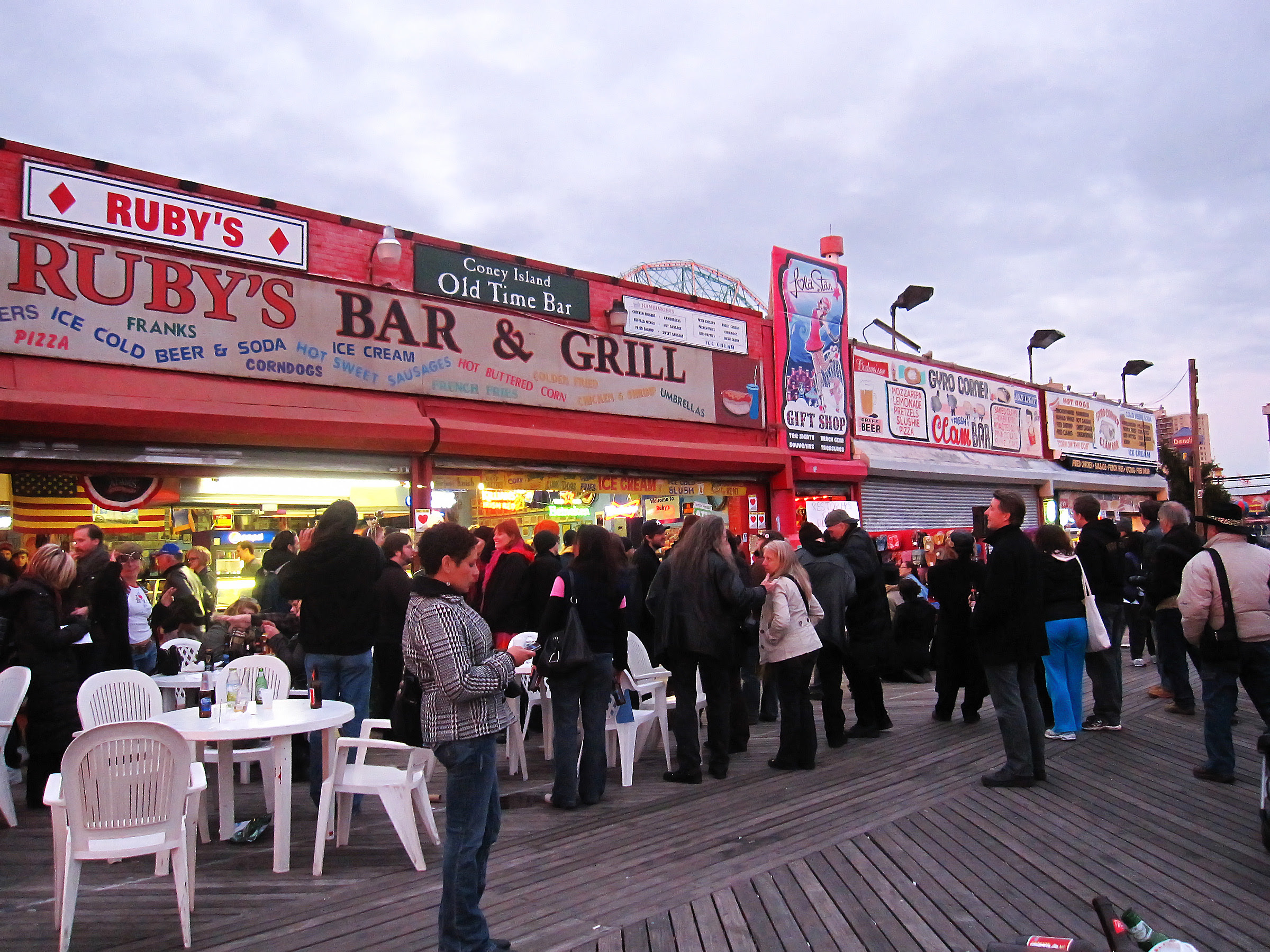 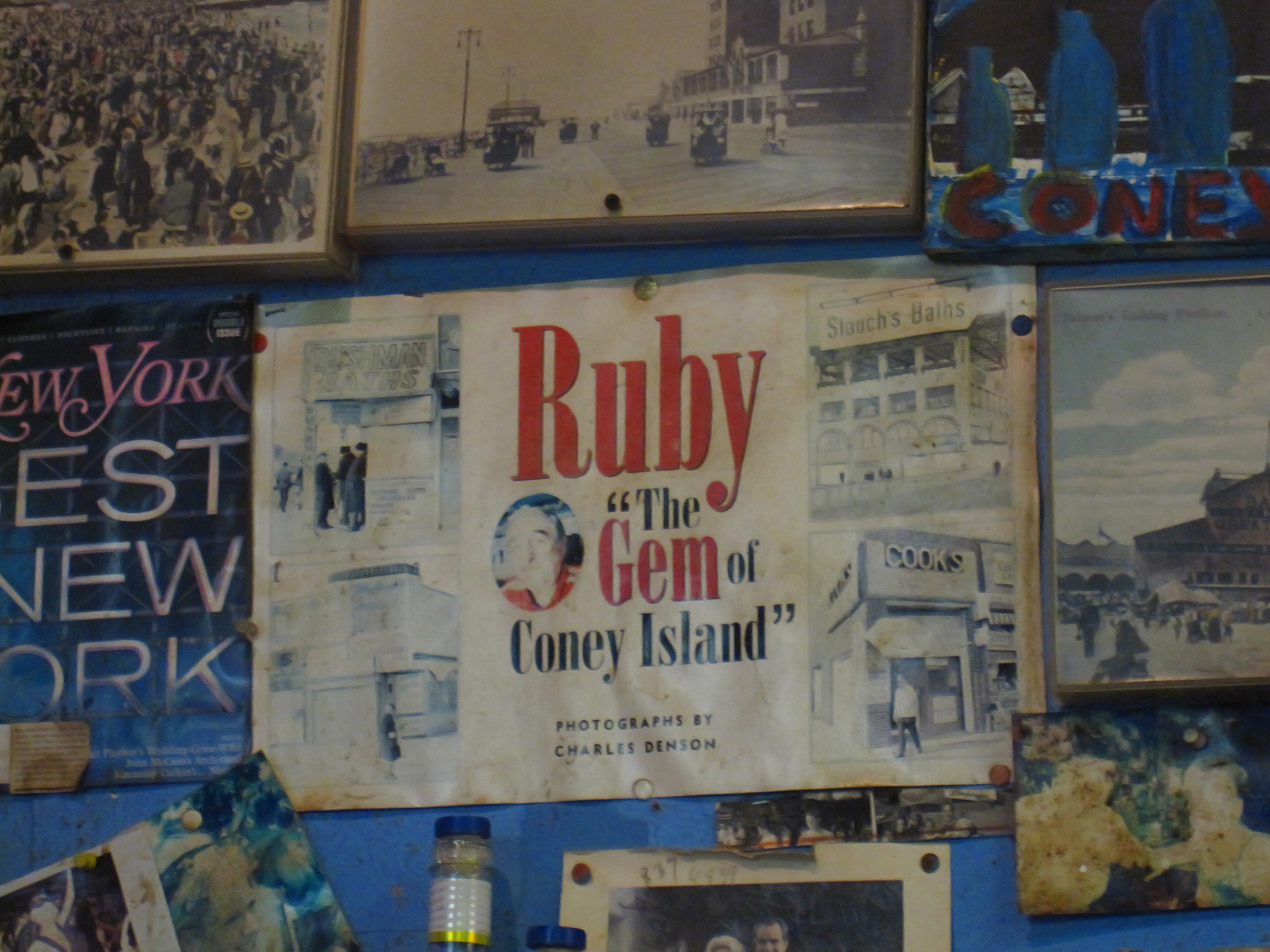 One reason I love Ruby's is their collection of Coney Island photos and artwork that covers all three walls: 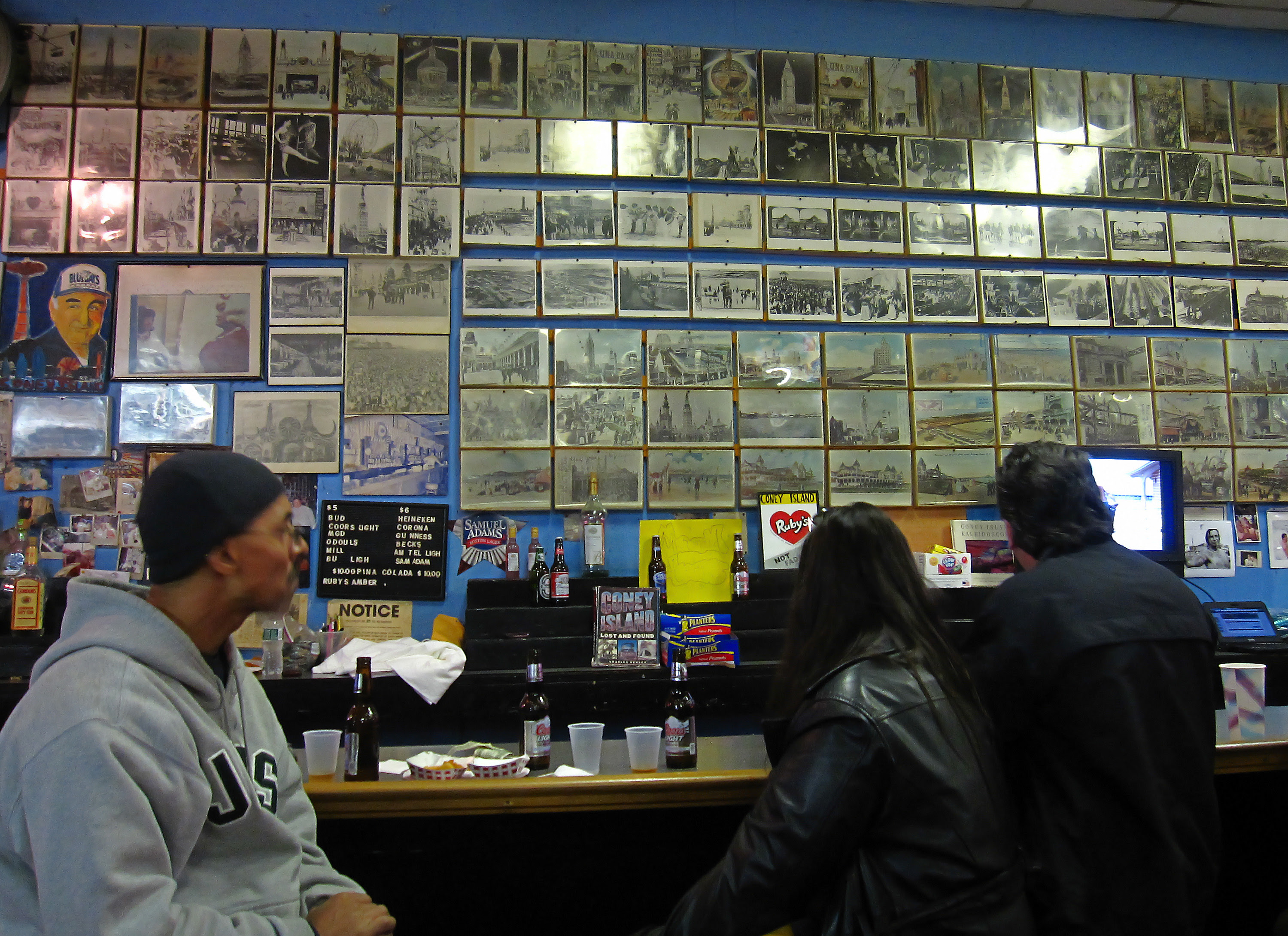 The memorabilia is personal and reminds us that this is a long-time family-owned-and-operated business, something rare these days.  A newspaper clipping also alludes to the recent negative changes affecting the entire boardwalk: 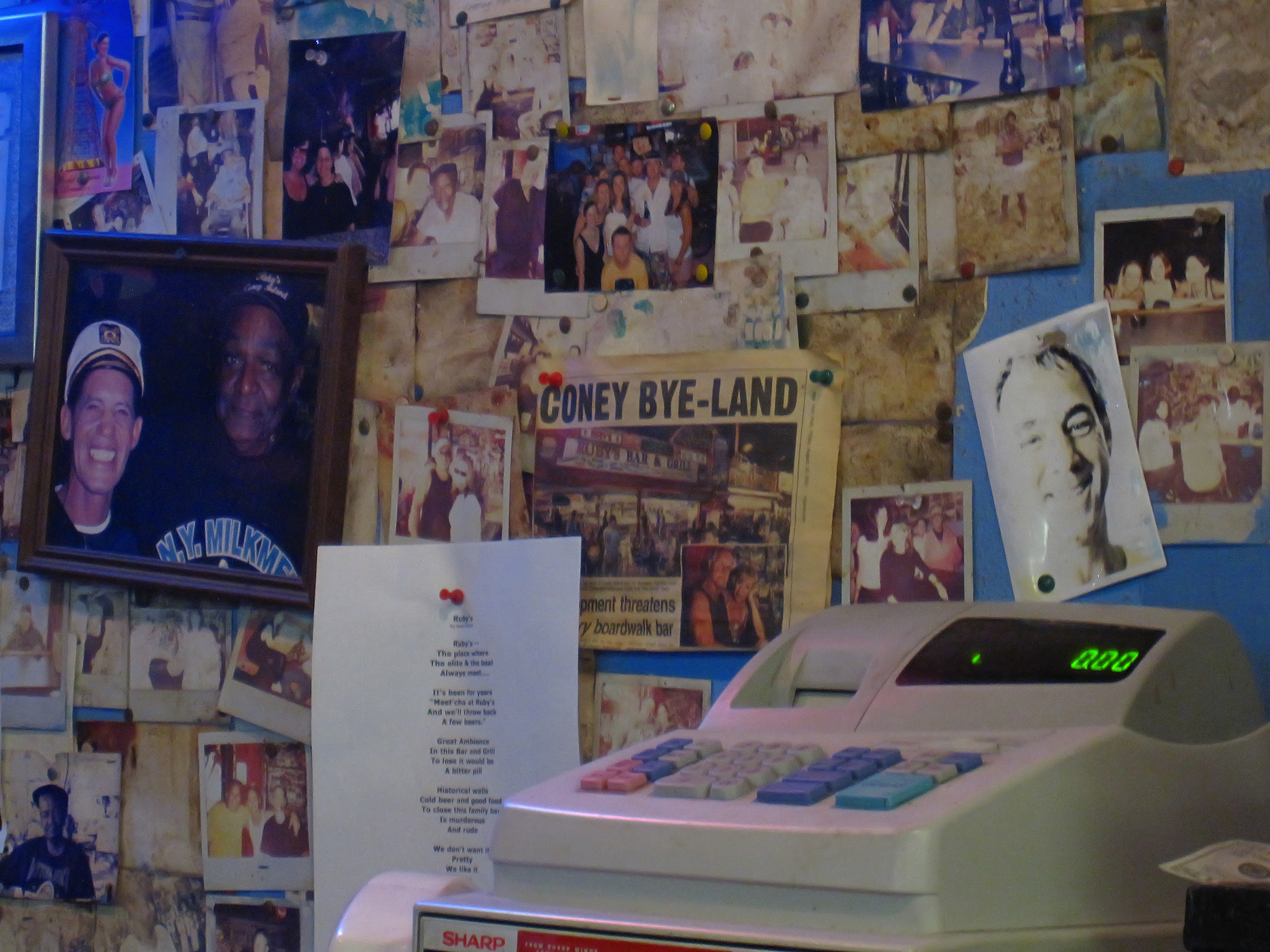 They swore to stay open this day until all the booze was gone.  By this time, the only drinks left were Corona, Heineken, peach schnapps and triple-sec. 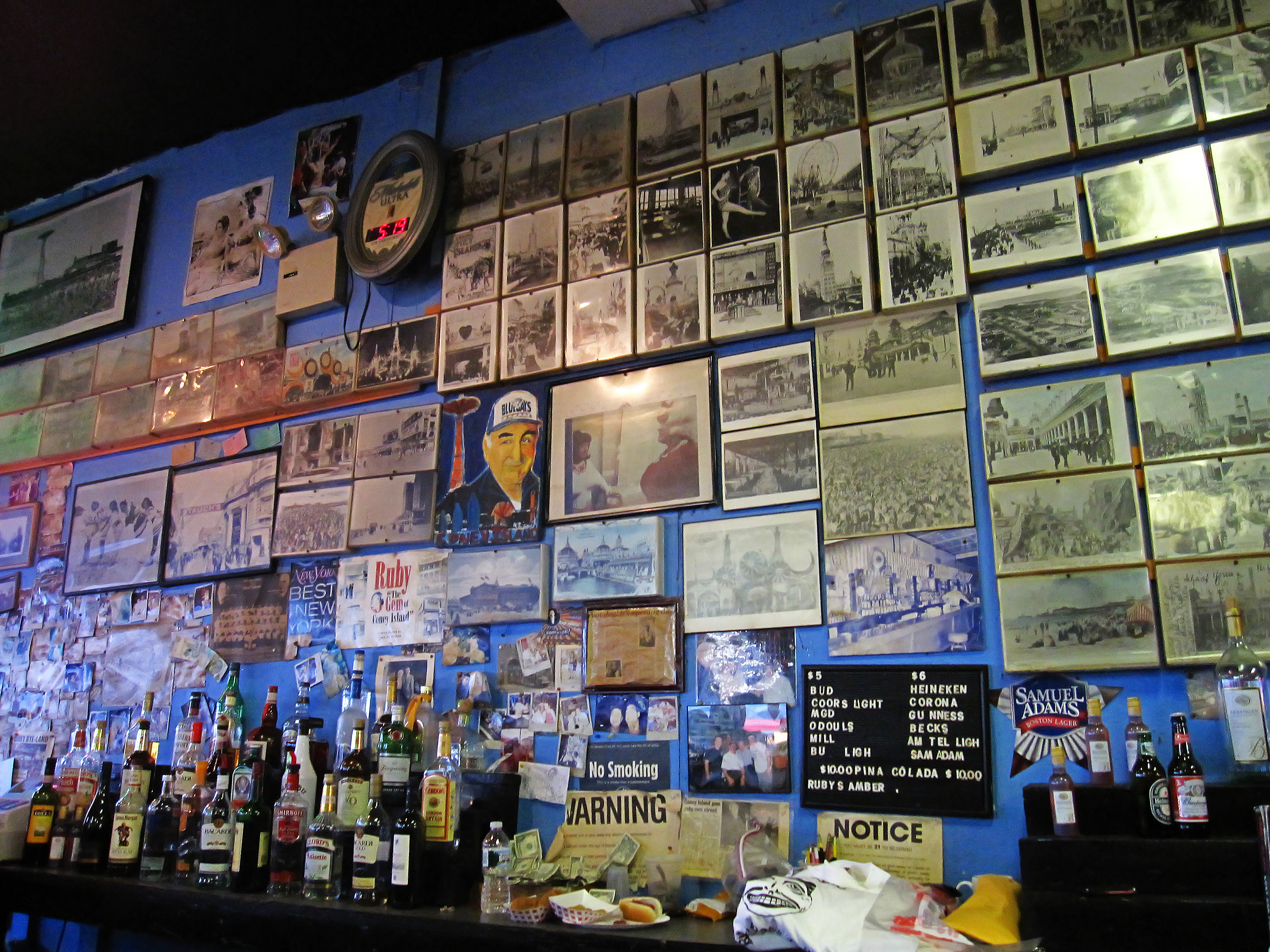 The penned-in area outside the bathroom has always provided me with amusing and pleasant experiences.  Unlinke usual bathroom lines, the one at Ruby's was always full of jovial people laughing about this or that, chatting each other up or, occasionally, showing off strange sea creatures found on the beach: The sun sets over the familiar boardwalk and the band played on... 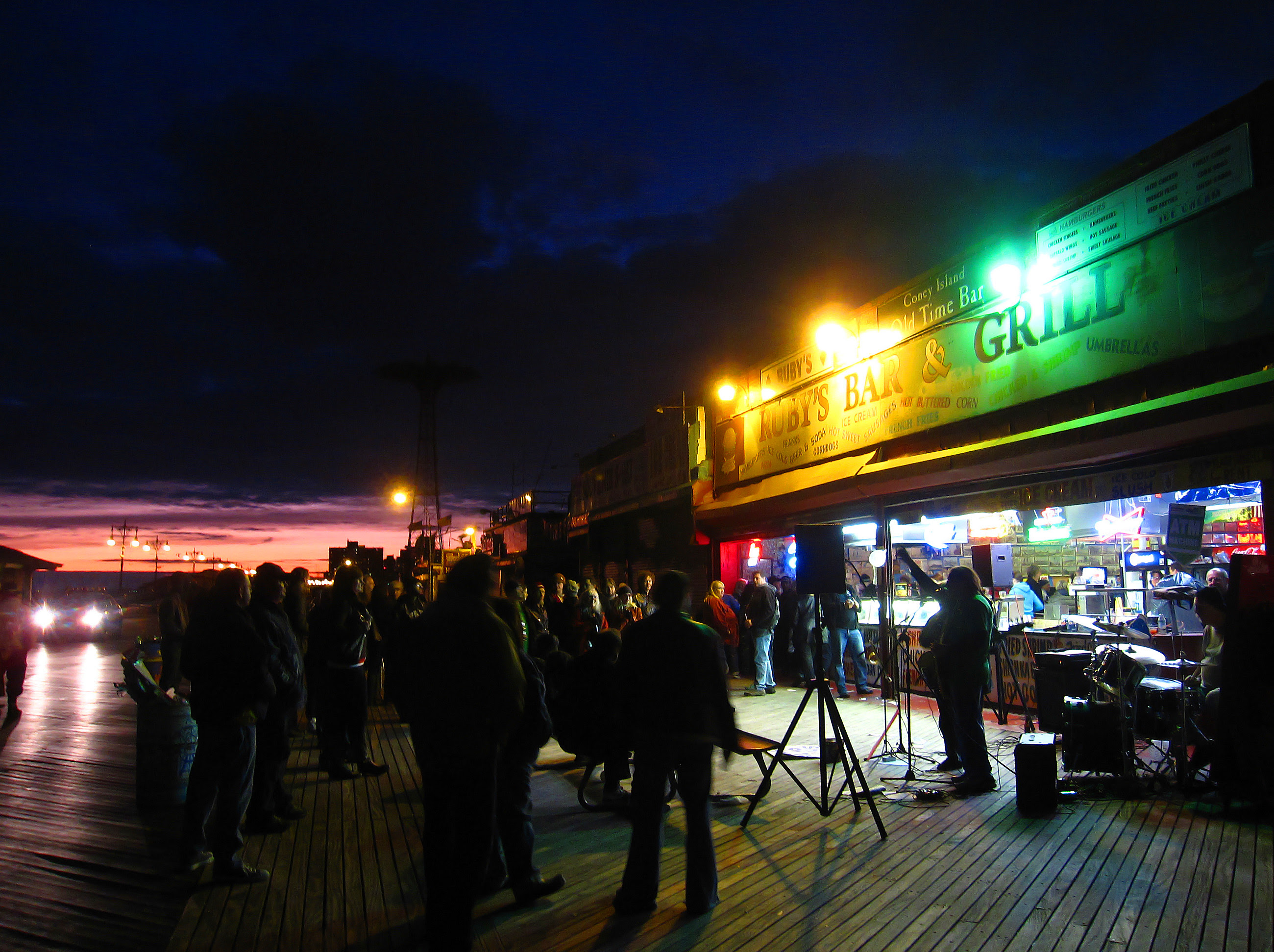 More photos of my evening at Ruby's can be found here.

As of today, the situation is still up in the air.  Due to huge support from patrons, Ruby's plans to be open this Saturday, November 13.  So, don't miss this opportunity to pay a visit and show support for one of Coney Island's most beloved institutions.

For more history on Ruby's, Coney Island, and to see some good videos of Ruby's daughters speaking about the 'real' Coney Island, check out Amusing the Zillion.

UPDATE:  A lawyer representing the Coney Island boardwalk businesses says there is no way they are leaving by the 15th.
Posted by Laura Goggin Photography at 2:24 PM 2 comments:

Sign the petition to save a Coney Island institution!

The slow demise of Coney Island has been going on for some time now, but there's still a chance to save Ruby's, one of the anchors of the boardwalk. Friends and supporters have created an online petition and on Facebook to save the beloved landmark.


If you want to see them stay they need your help please CALL or send letters to:

In business since 1934, we are the Oldest Bar & Grill on the Coney Island Boardwalk. Famously located directly on the boardwalk with the Atlantic Ocean as our front yard.

RUBY'S is family owned and operated. We are the only full service bar & grill on the boardwalk with indoor seating. RUBY'S was Voted the 14th sexiest beach bar in the world by the TRAVEL CHANNEL. Other awards include best Dive bar in Brooklyn 1999, 2002, 2005, and best jukebox on the boardwalk 40 years running.

Amusing the Zillion also has a good post here.

I can't find my photos of Ruby's at the moment, but this is how I like to remember Coney in all its unrepentant crudeness: 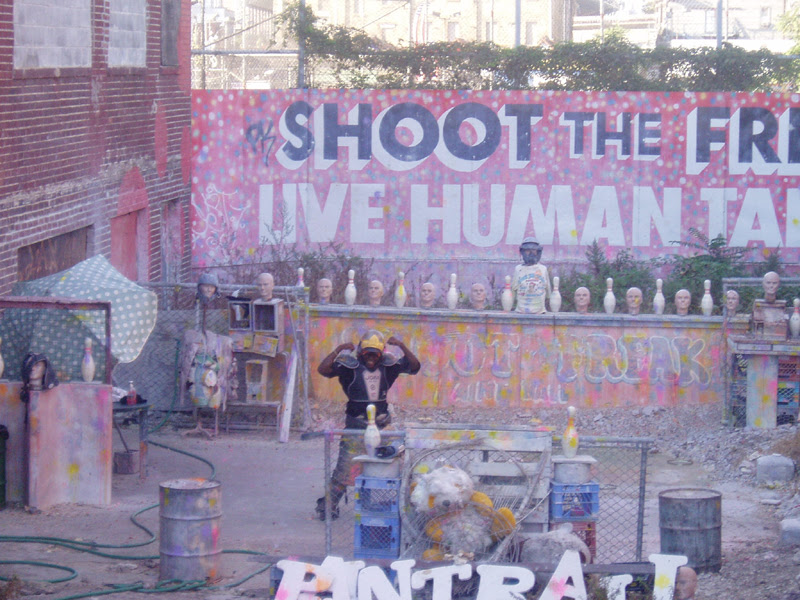