I'm sorry to report it appears one of the Tompkins Square hawk chicks has passed away. The cause is unknown, but it happened some time last night between 7pm and 6am.

This nest has been difficult to observe as it is very high and obscured by leaves. This photo was taken on May 27 (Memorial Day) when I was able to catch a brief glimpse of Amelia and the chick. 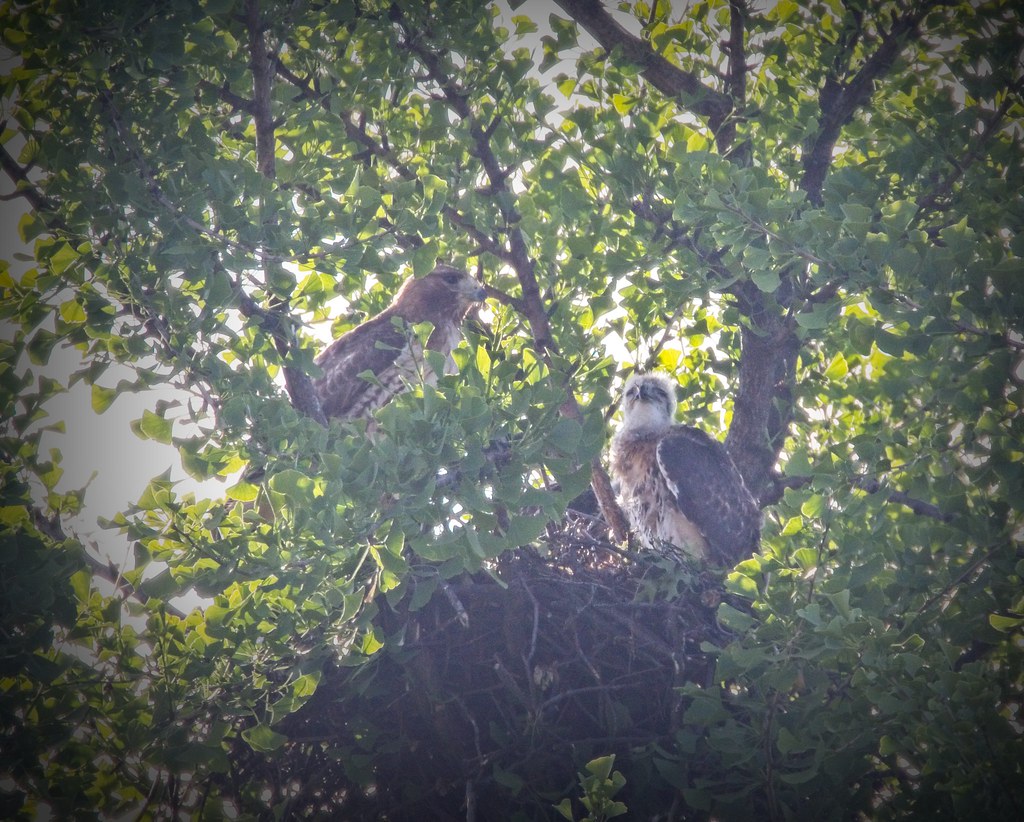 Based on feather development, I am guessing this was the younger of the two nestlings, although they were hard to tell apart early on, as shown in this photo taken May 10. 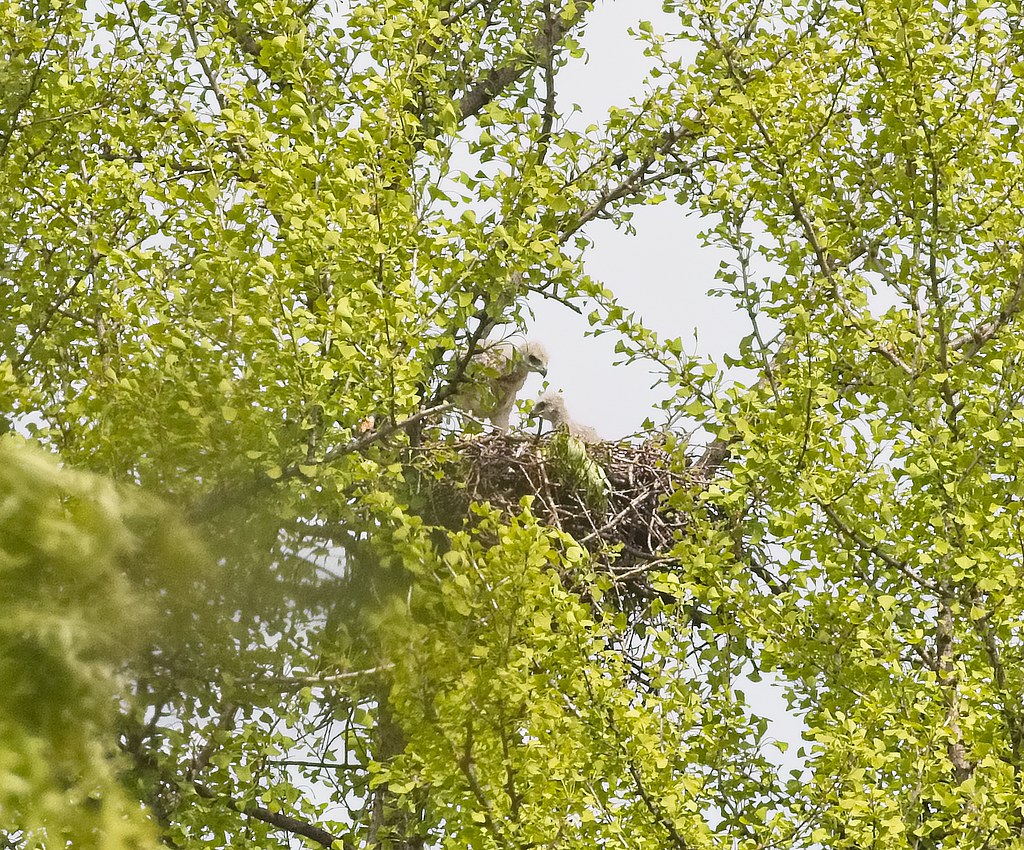 We lost a fledgling last year to a combination of rodenticide and West Nile virus. The year before that, another fledgling died and tested positive for West Nile. It's not possible at this time to say what killed this chick, but the same dangers still exist in our environment. The Parks Department does not use rodenticide in Tompkins Square, but it is used all over the neighborhood on private property and in some community gardens. West Nile virus is spread by mosquitoes, so any standing water is a breeding ground for them.

I will post any updates if/when I know anything.

Posted by Laura Goggin Photography at 3:59 PM No comments:

The red-tailed hawk nest in Tompkins Square Park has been extremely difficult to see this year due to the foliage and windy weather that blows the branches around. The chicks have mostly been keeping low in the nest. 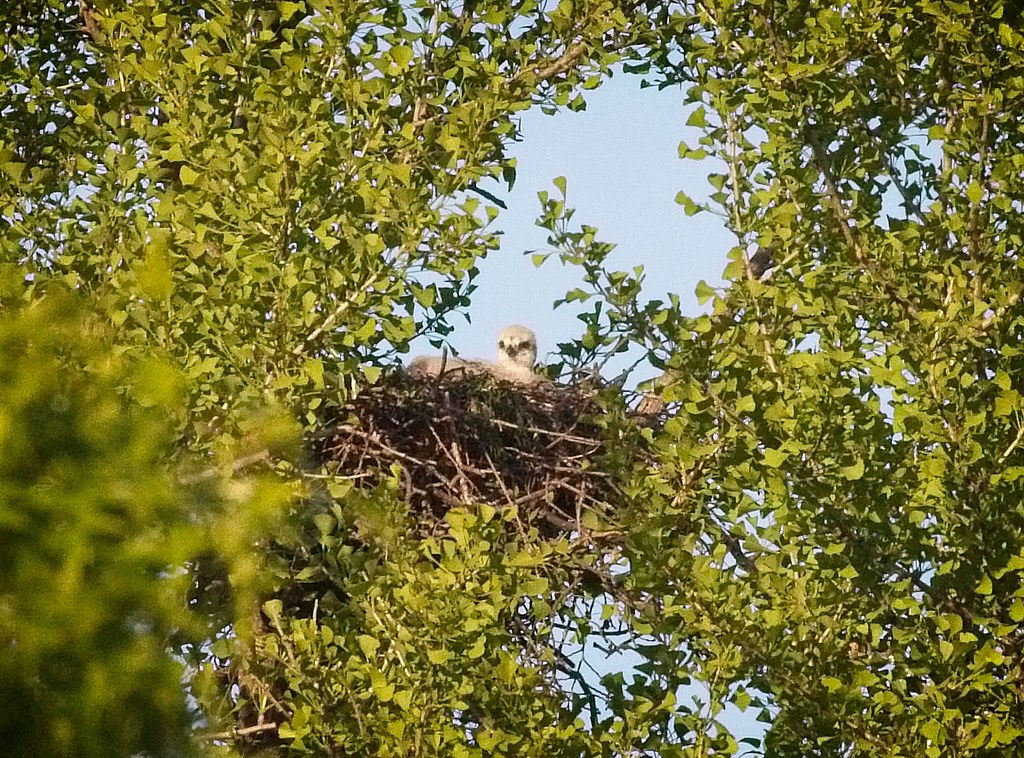 Over the last few days, I've managed to catch a few glimpses of the nestlings who still have downy white heads, but are growing dark brown wings and tails. 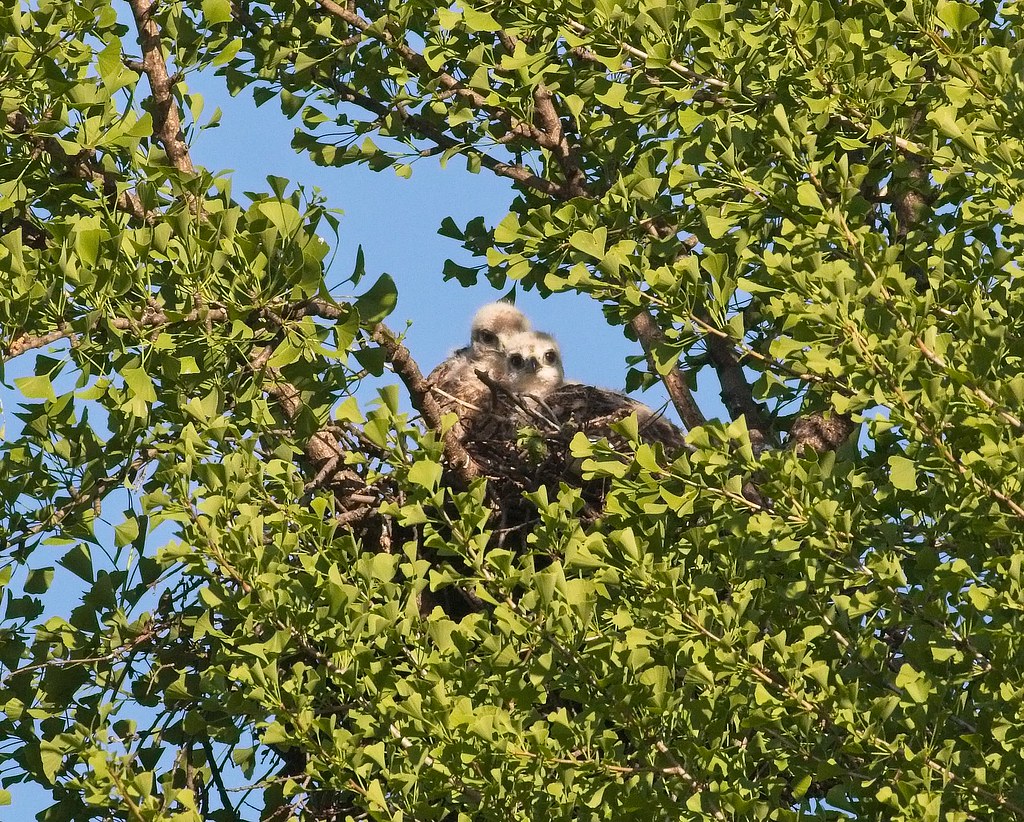 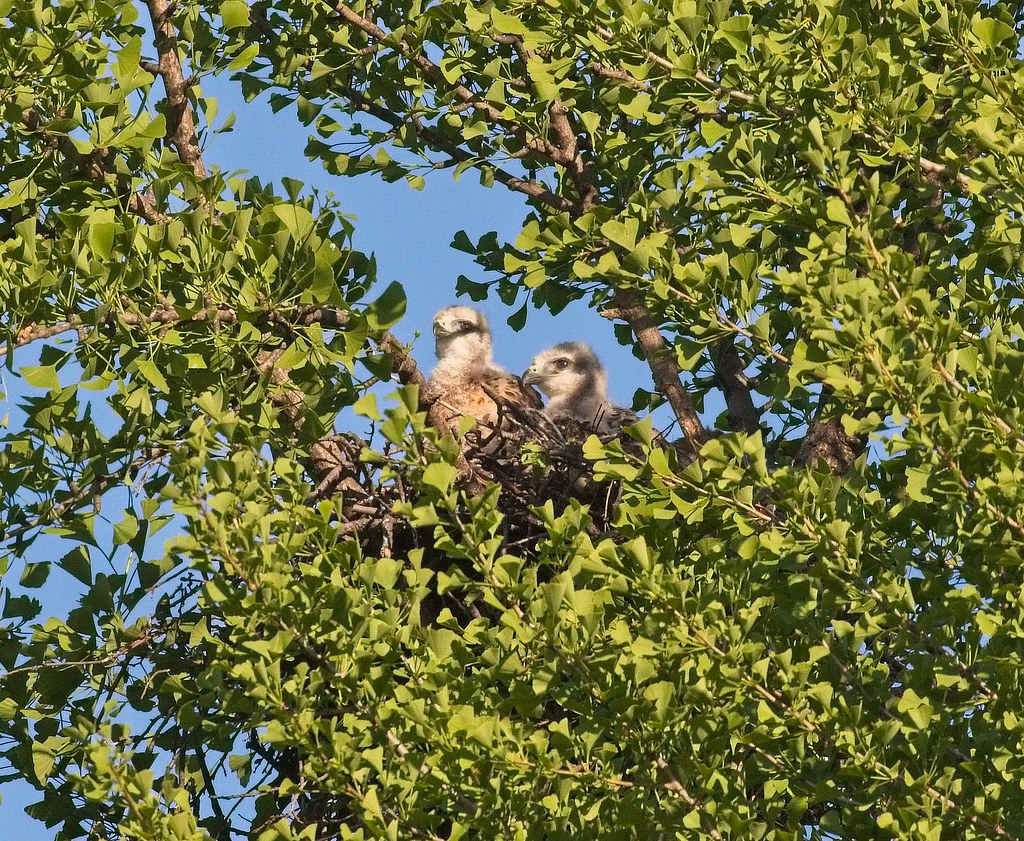 They are also developing some color on their chests. 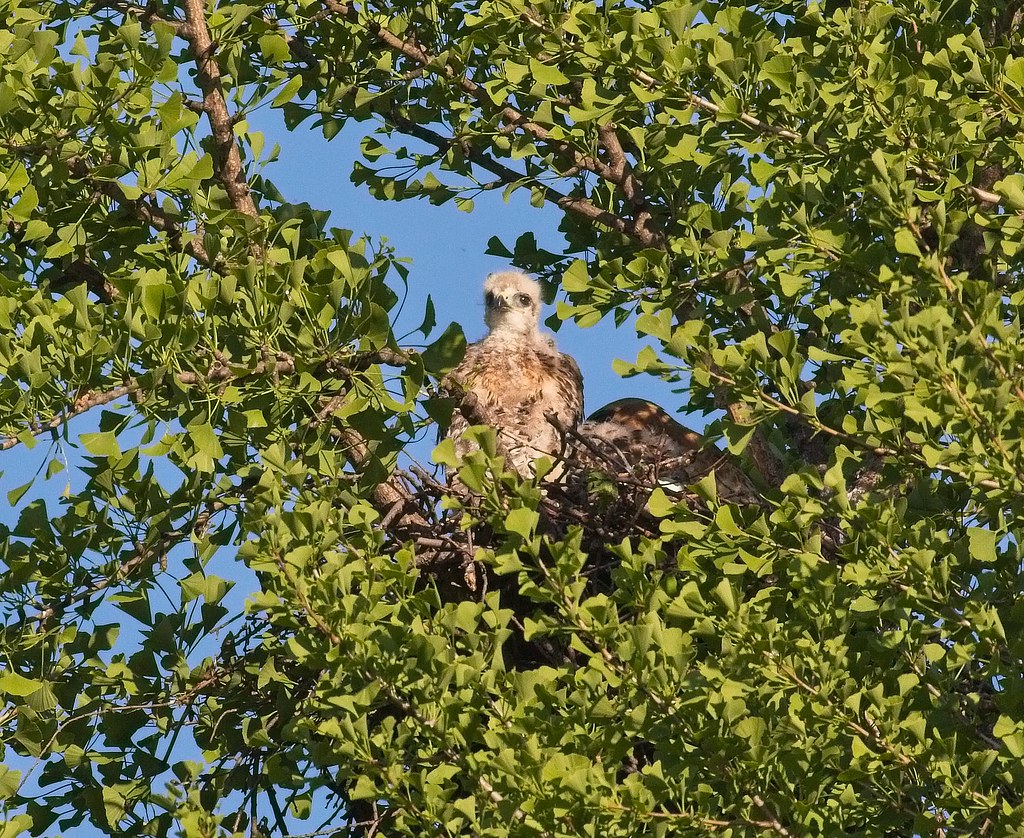 Below, mom Amelia enters from stage-left and you can get a sense of the size of the chick, who is nearly as tall as mom. 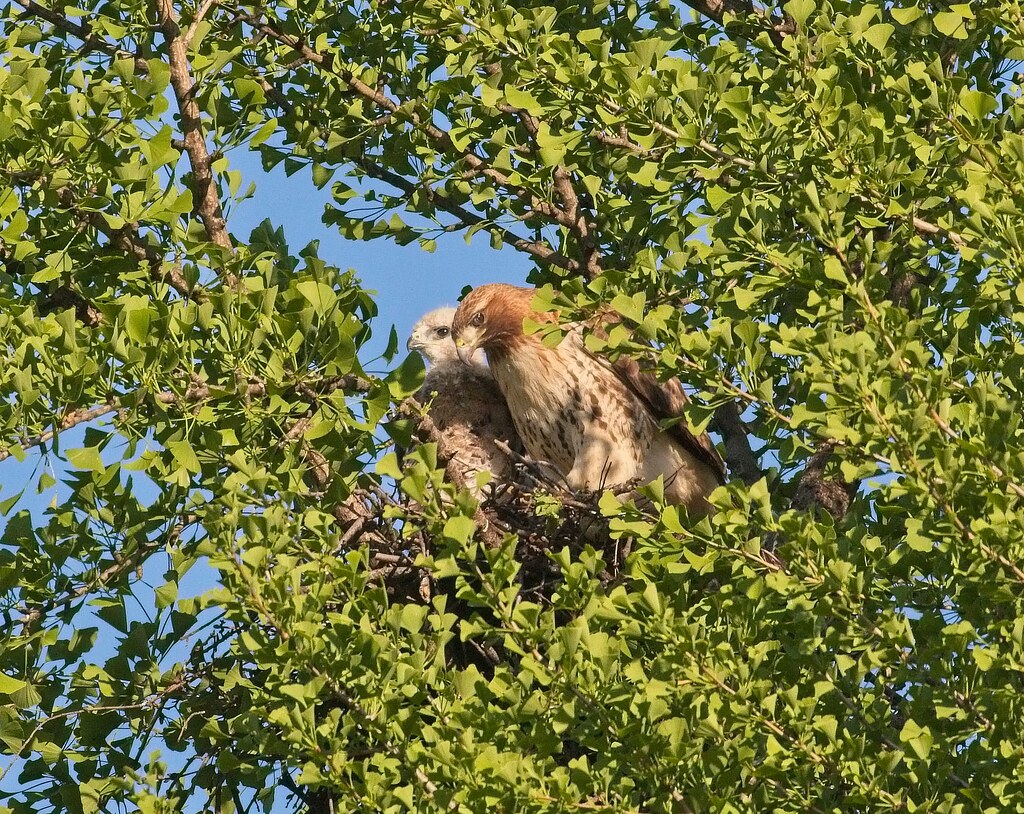 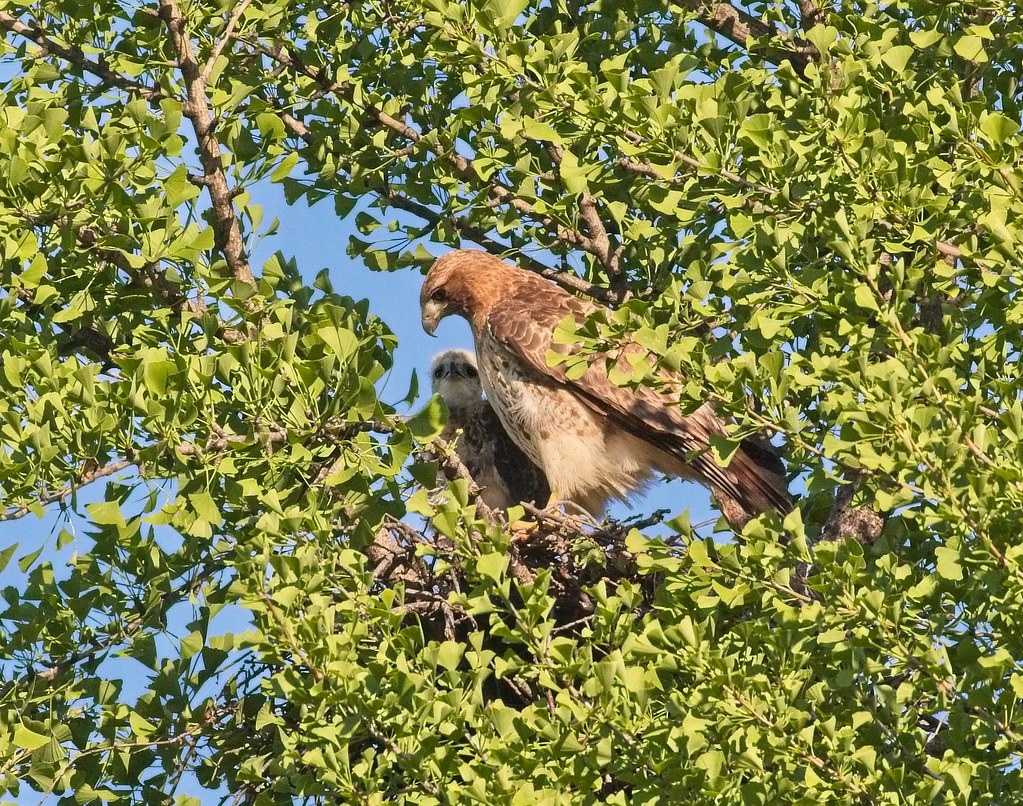 There's a big world beyond the nest waiting to be discovered... 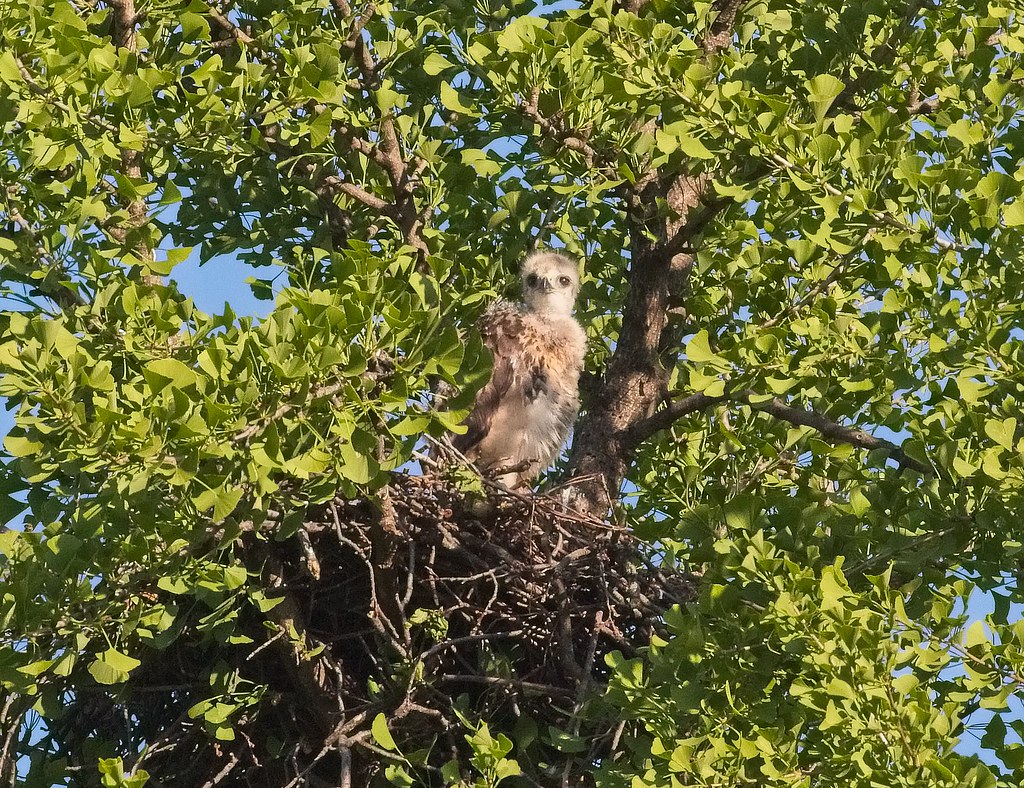 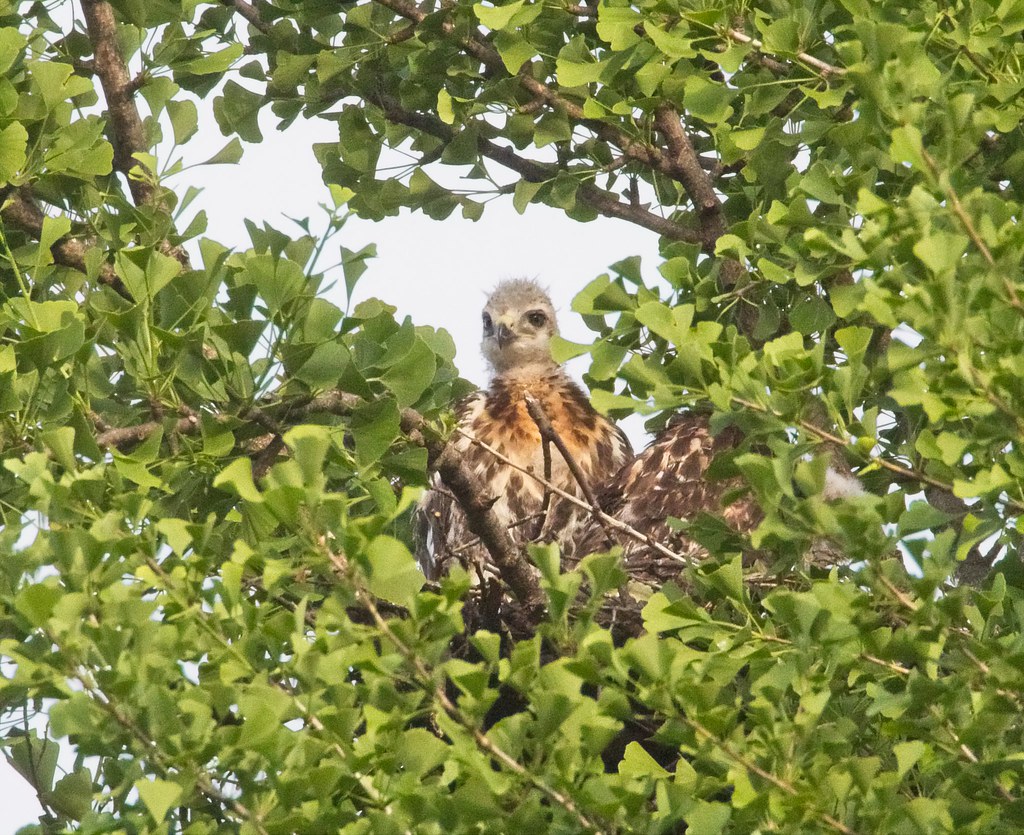 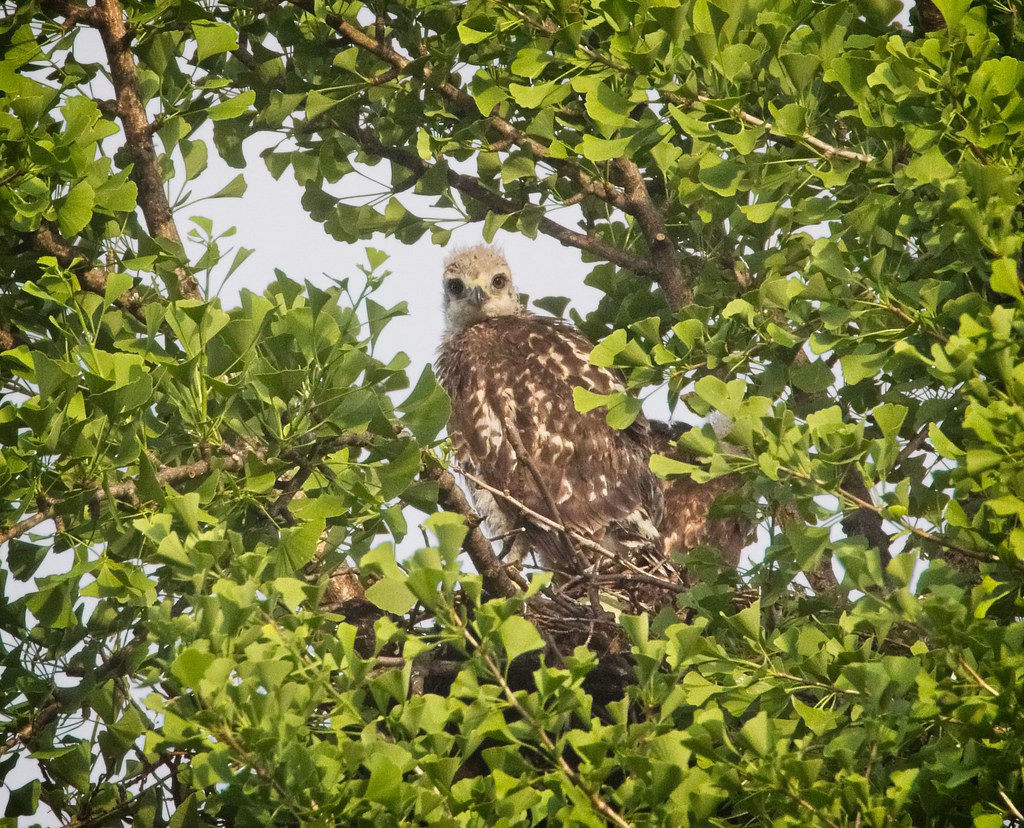 Assuming the babies hatched on/around April 20, we can expect fledge time to be in the next couple of weeks. However, there is no rush and the kids are free to take their time.

If you want to see young red-tails practicing their pre-fledge moves, be sure to check out the live NYU Hawk Cam over at Washington Square Park. Better yet, take a walk over there to see them in person!


Posted by Laura Goggin Photography at 7:27 PM No comments:

Checking in on the Tompkins Square hawk family

Checking in on the Tompkins Square red-tailed hawk family this week, and everybody looks to be doing well.

On a recent visit, I found Christo babysitting. 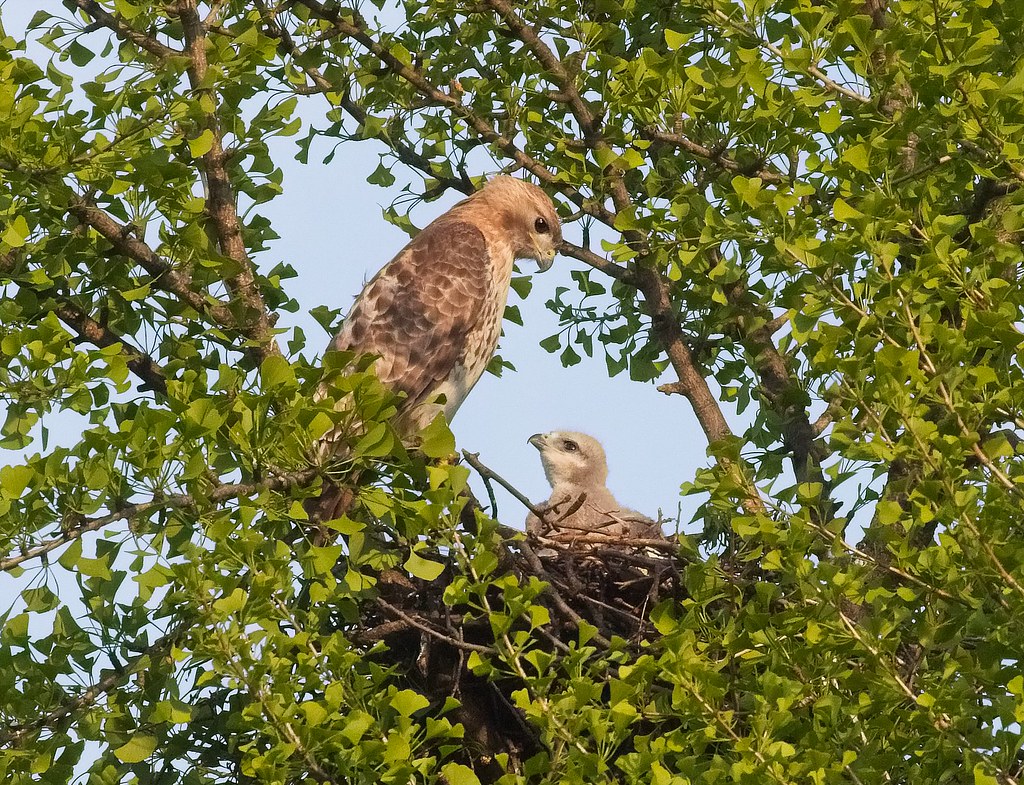 Below, mom Amelia sits in the nest while one of the two youngsters looks out. 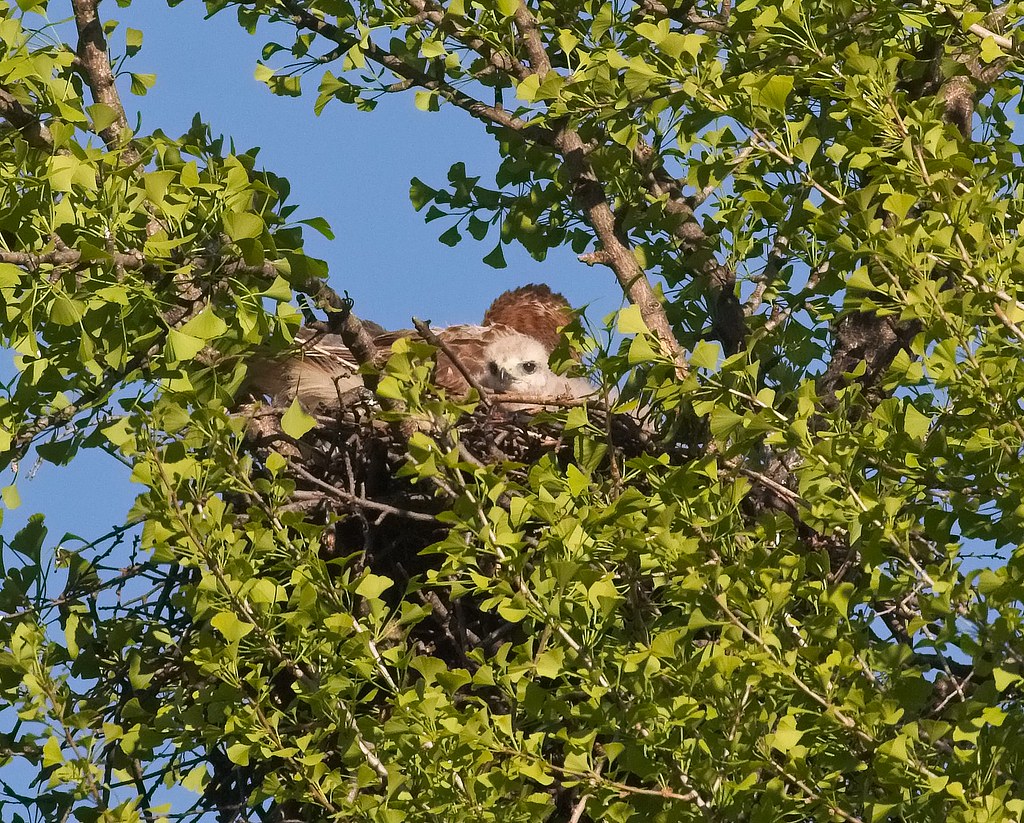 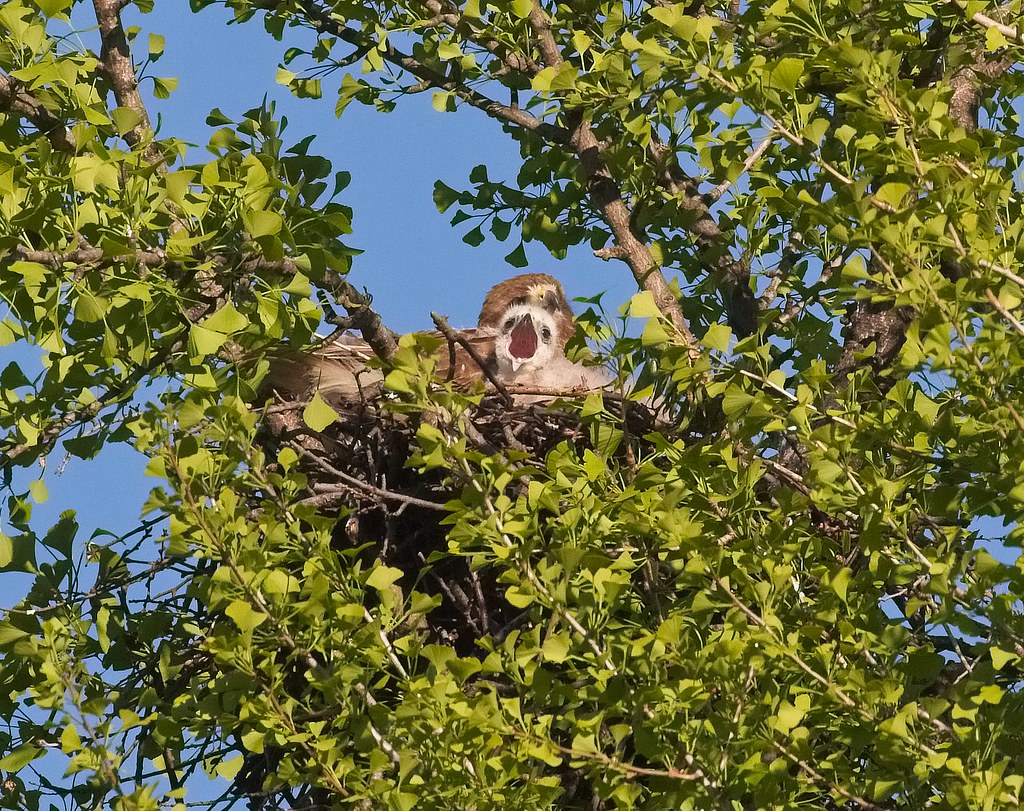 Later, Christo delivered dinner and the whole family crowded into the nest. In the photo below, one nestling is behind leaves on the far left, the other is peeking up at the center of the nest, and Amelia looks on as Christo tears up a rodent into bite-sized pieces. 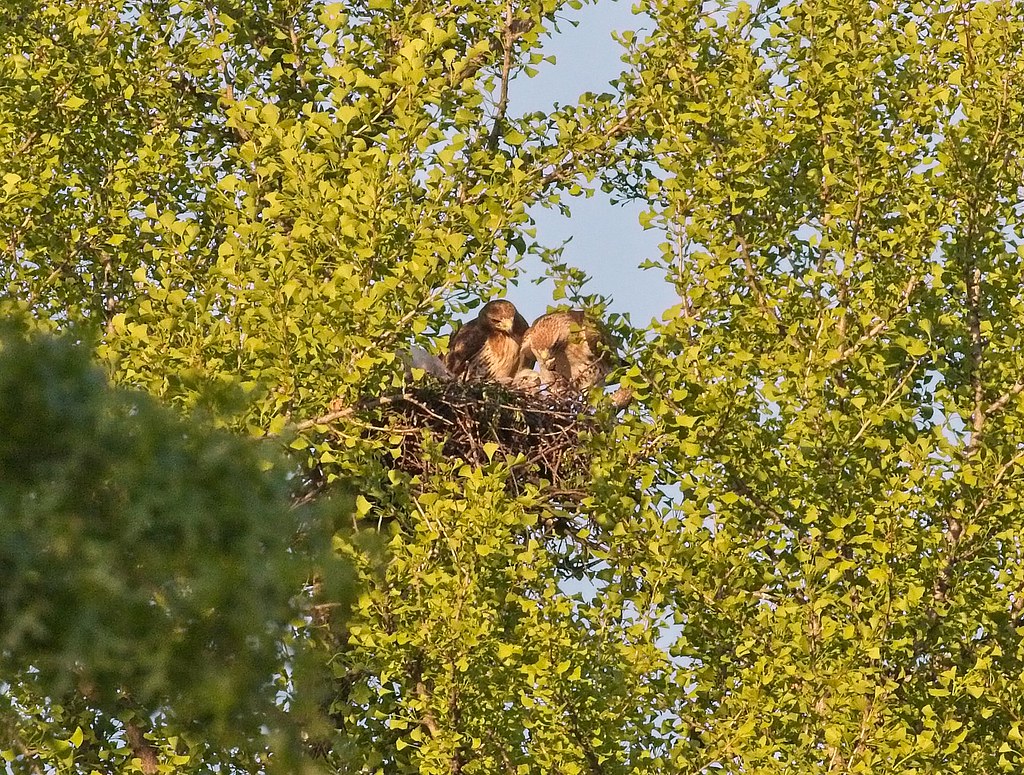 The nest is deep, so it's surprising to see how big the chicks are when they stand up. 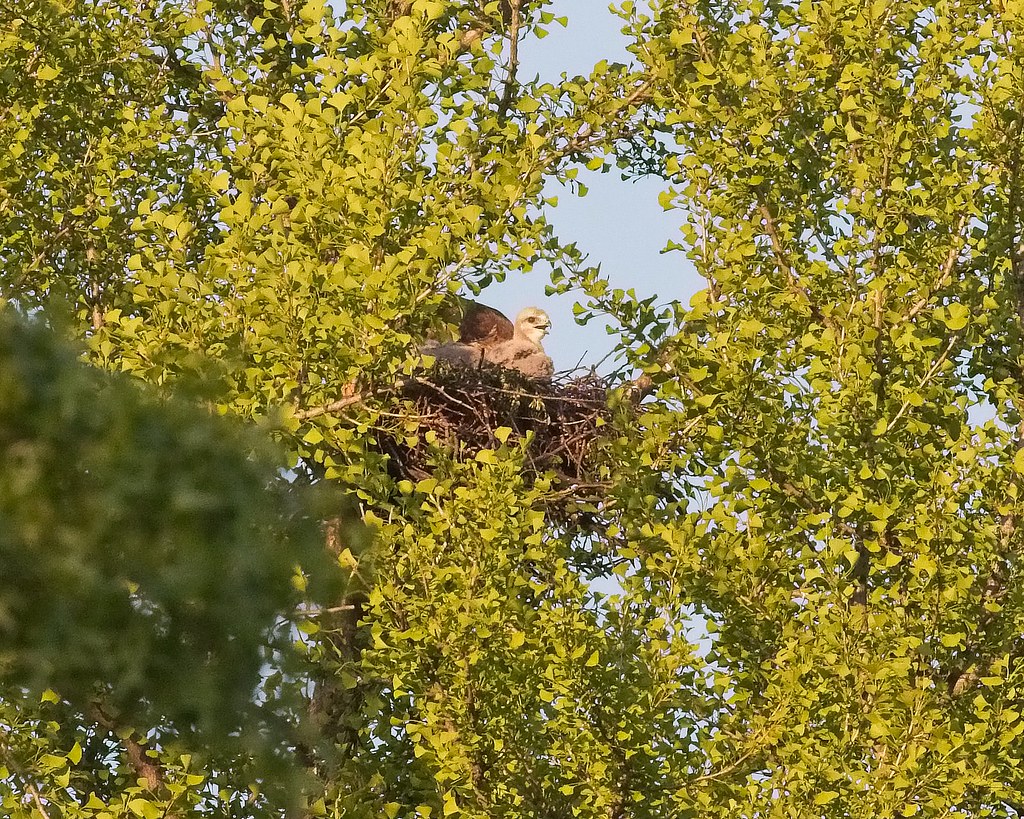 They're already losing down on their backs and wings, revealing dark brown flight feathers. And the tail feathers are coming in as can be seen on the chick below on the left. The tail looks to be about 3-4 inches long and has a colorful pattern. I hope this remains as the tail grows as it could help us identify who is who later on. 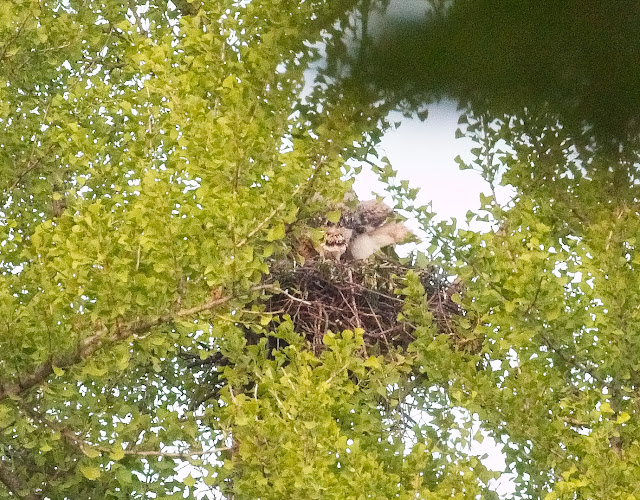 So far, the chicks look good and everything seems to be progressing normally.

Posted by Laura Goggin Photography at 7:47 PM No comments:

The red-tailed hawk nest in Tompkins Square Park is deep with high sides, so getting a good look at the chicks has been a challenge. They've finally grown enough to be seen fairly well from the ground. 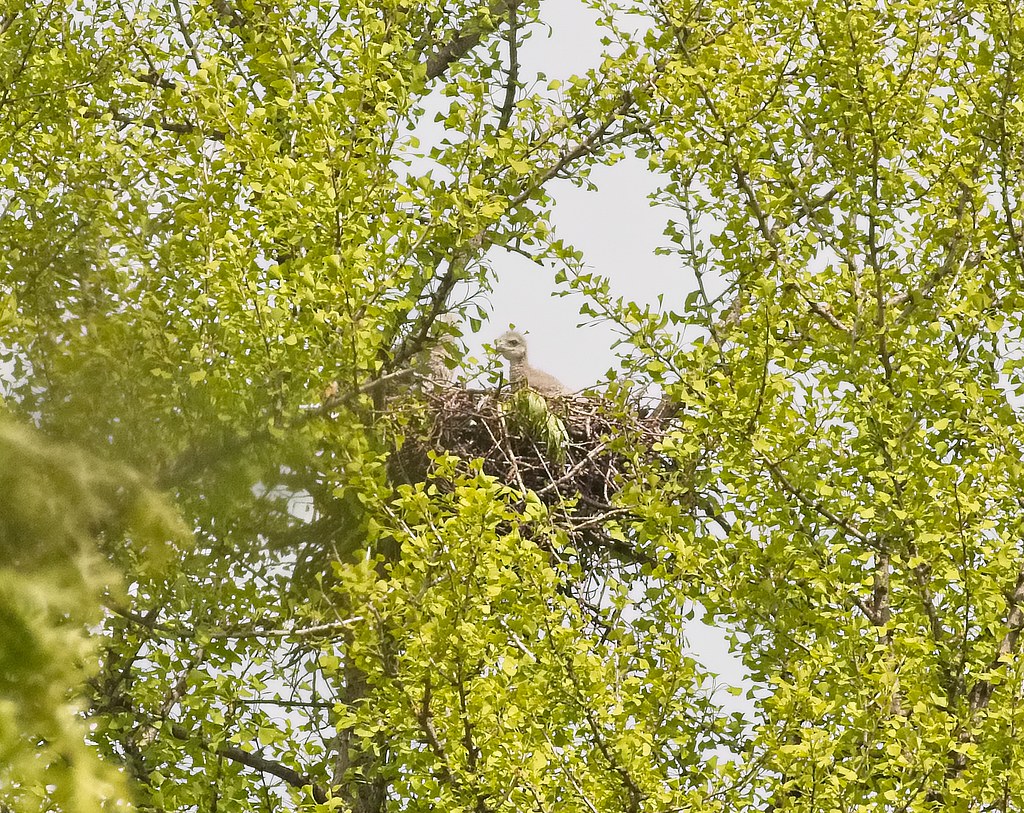 We can confirm there are two chicks and they are still at the cute fuzzy stage.

Both have been getting exercise, standing up and flapping those little wings. 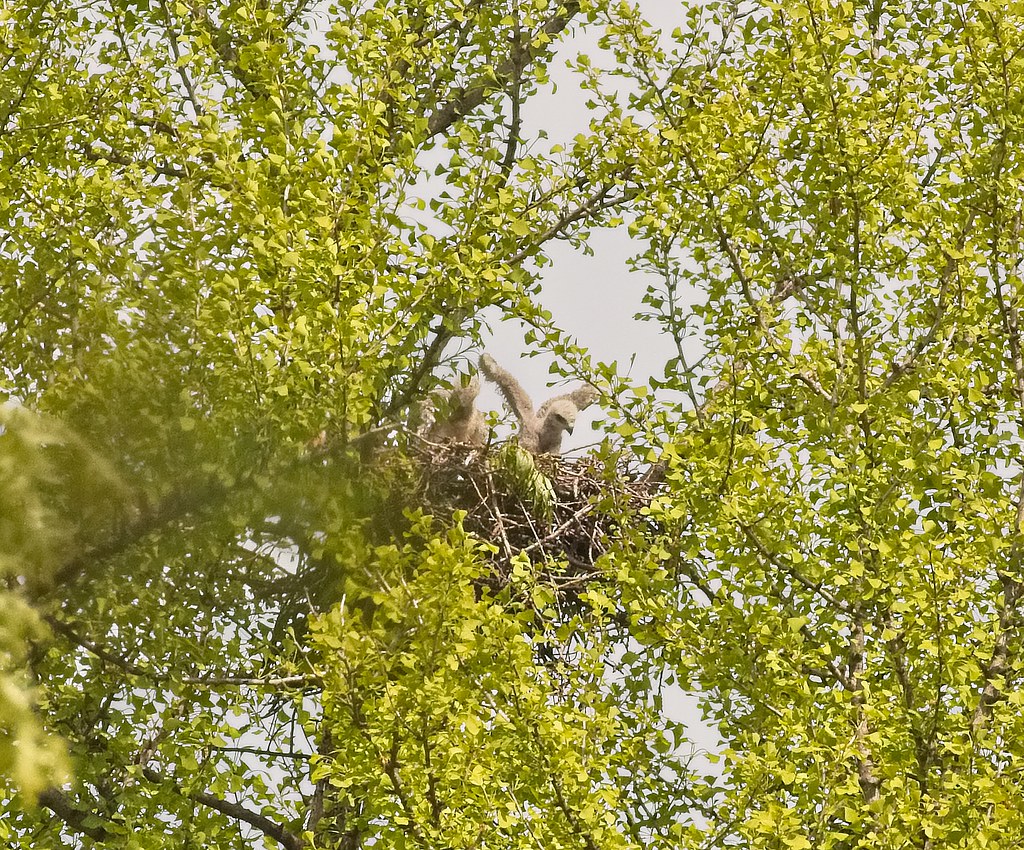 It's not visible in these photos, but the chick on the left has more pin feathers on its wings, indicating it is likely the older of the two siblings. Otherwise, they look alike. 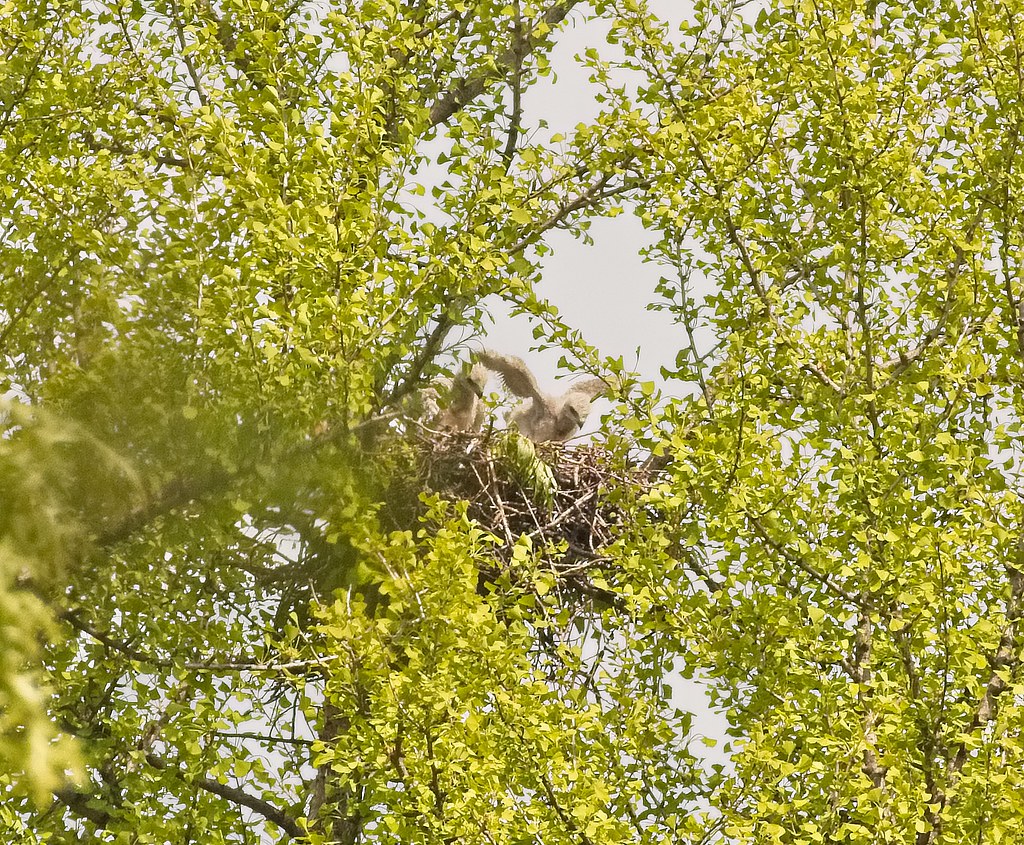 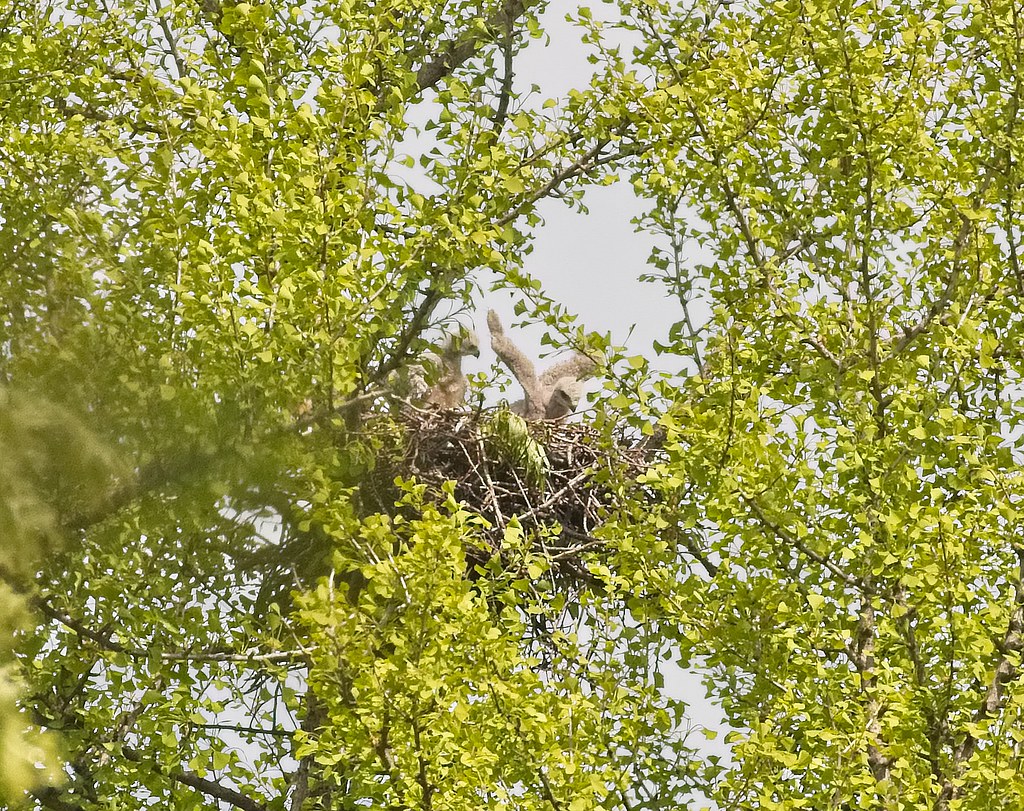 Mom Amelia is now able to take extended breaks from the nest, giving the kids room to move around. She can keep an eye on them from the cross at St Brigid's church on Avenue B, where she is also vulnerable to mobbing by blue jays. 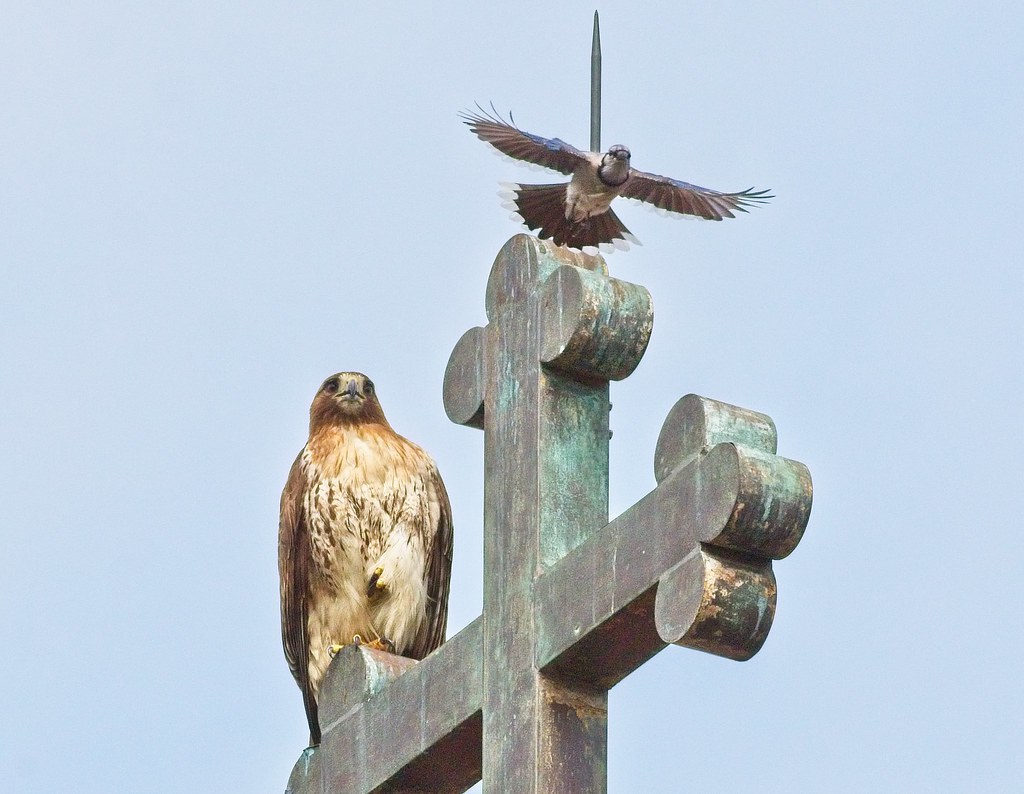 This jay annoyed her while she preened, but she played it cool, doing her best to ignore it. Blue jays, mockingbirds, robins and other smaller birds will often harass the hawks, especially now during nesting season. 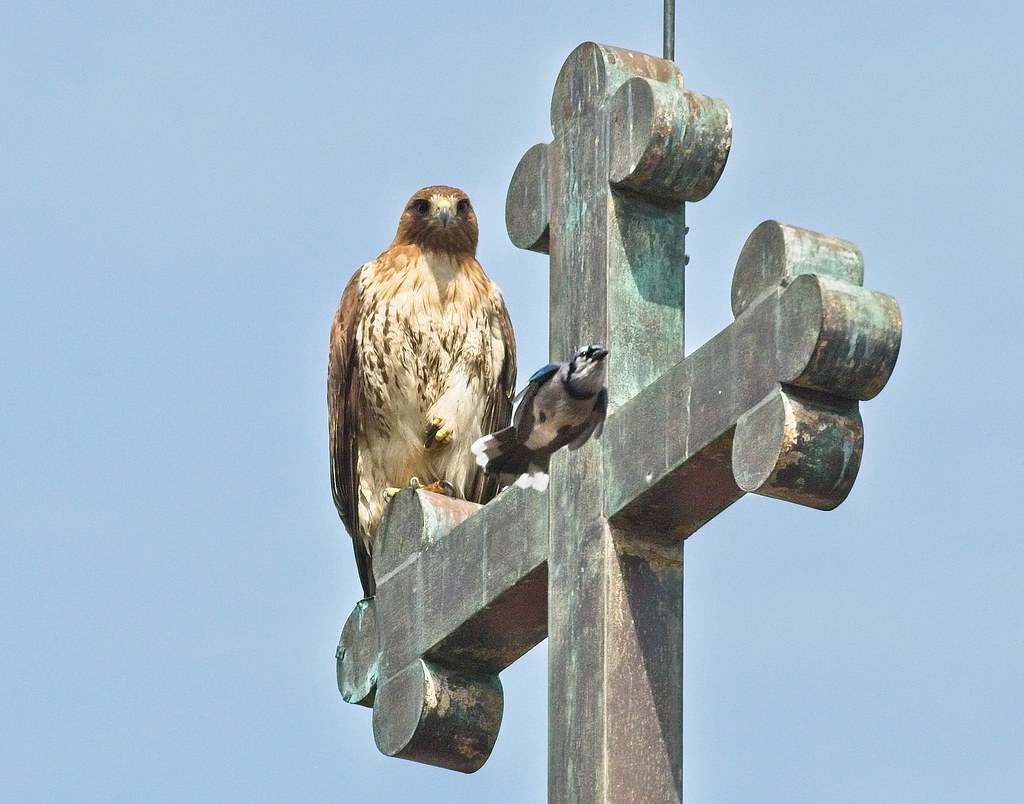 All is looking good for the Tompkins Square hawks and things seem to be progressing as they should.

Meanwhile, there is some concern over at Washington Square Park about the male (known as Bobby), who has been missing this last week. Roger Paw and Urban Hawks both have posts on the subject. You can tune into the live NYU hawk cam to keep up with the three chicks. I hope they all do well and there is a positive outcome for that hawk family.

Posted by Laura Goggin Photography at 6:27 PM No comments: