Some fledgling hawk pics to take you through the weekend

I have been remiss in posting hawk photos this week due to events happening in the human realm.

However, I've been hearing from people that seeing/experiencing the birds and nature brings some peace and comfort in stressful times, so below are photos taken of the Tompkins Square fledglings this past week.

To recap, the first chick fledged on June 1 and the other two fledged on June 2. Since then, the whole hawk family has been doing great and is staying together in the park.

This is one of the fledglings hanging out near the ping pong table on Thursday morning. 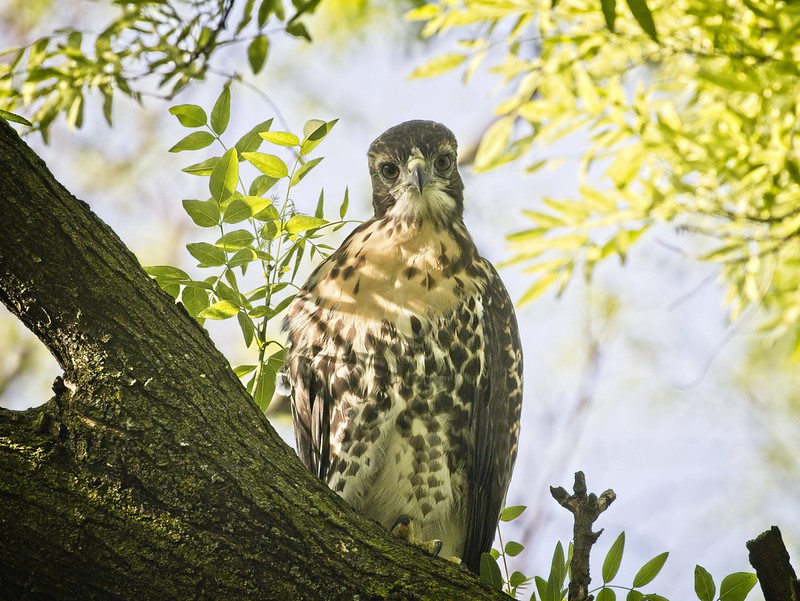 The fledglings are currently building strength and learning to fly. The photo below shows one of them awkwardly flying with its legs hanging down, a sure sign of a novice. They quickly learn to tuck their legs up to become more aerodynamic. 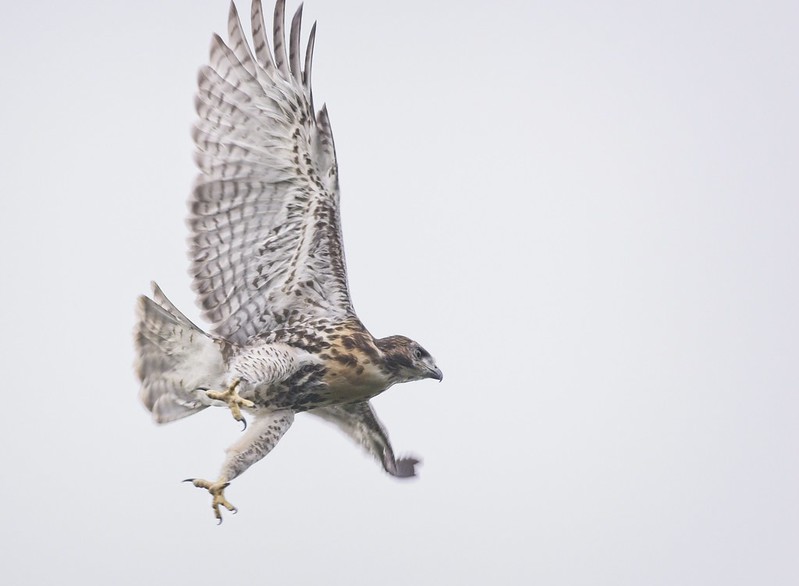 Here is one of them taking off. It's in the process of turning its body from a vertical perched position to a horizontal diving one. 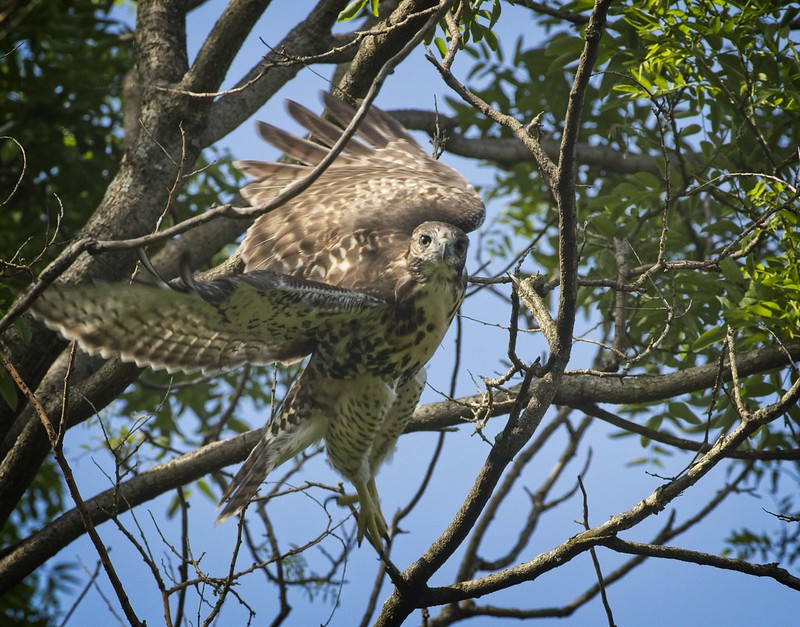 At this point, I can't really tell the three fledglings apart. They do have differing markings on their chests which I will need to compare with photos, but their tails are probably the best way to identify them. Whereas their faces and body feathers may change in appearance, their tails should stay consistent until they molt their feathers in a year. The photo below shows the tail of the first fledge - note the white patch along the left side of the tail feather. This is a good mark to look for when trying to identify the birds. 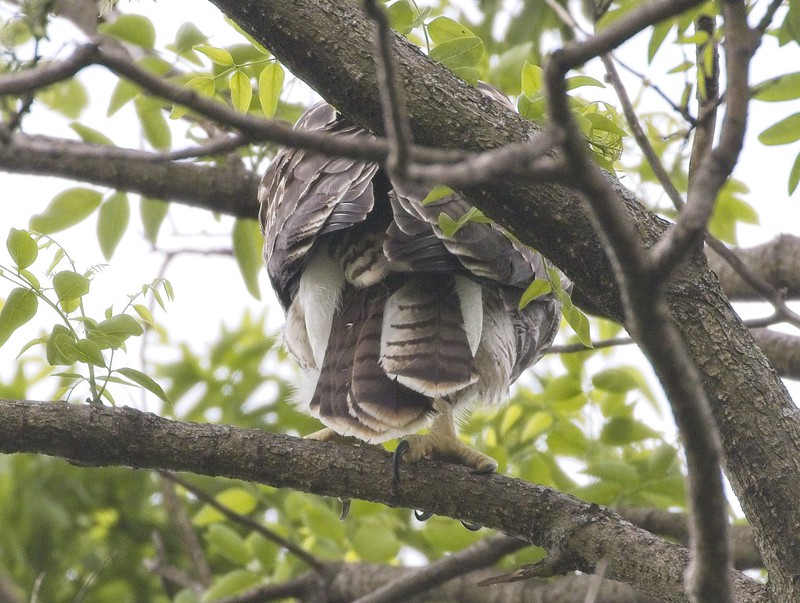 This is the back of one of the other fledglings as it takes a sun bath. I love the geometric pattern of the feathers. 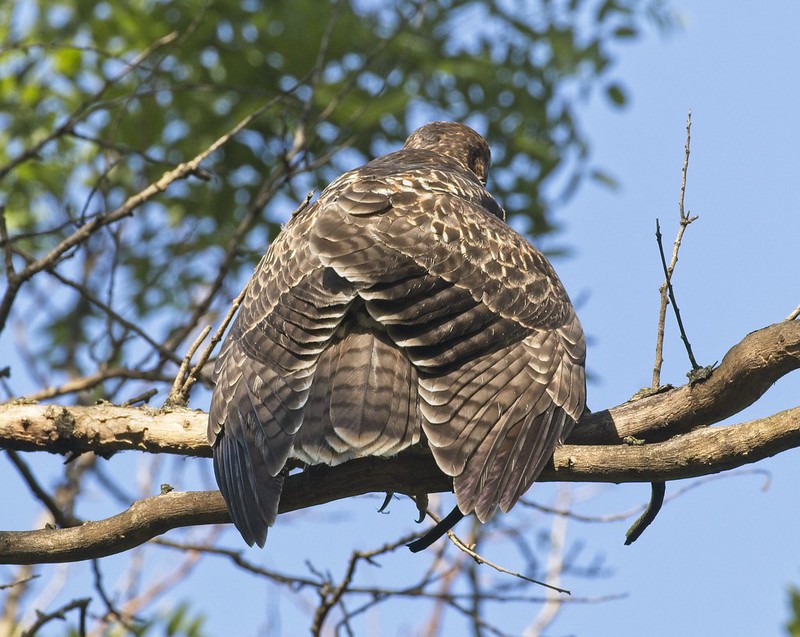 The fledglings do not know how to get their own food yet, so they are still dependent on their parents to provide meals. I find it fascinating to observe how Christo and Amelia work together to feed the kids.

Christo's primary job is hunting and providing the food. In the photo below, he is on the top branch where he has just flown in with a rodent. Amelia is on the branch below and one of the fledglings can be seen in the leaves behind her. 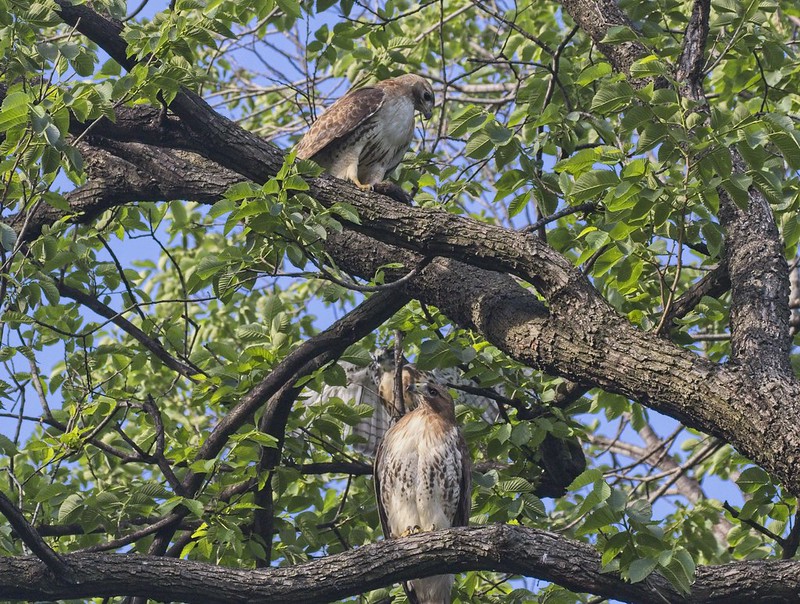 Amelia then hops up to Christo's branch to retrieve the rodent. 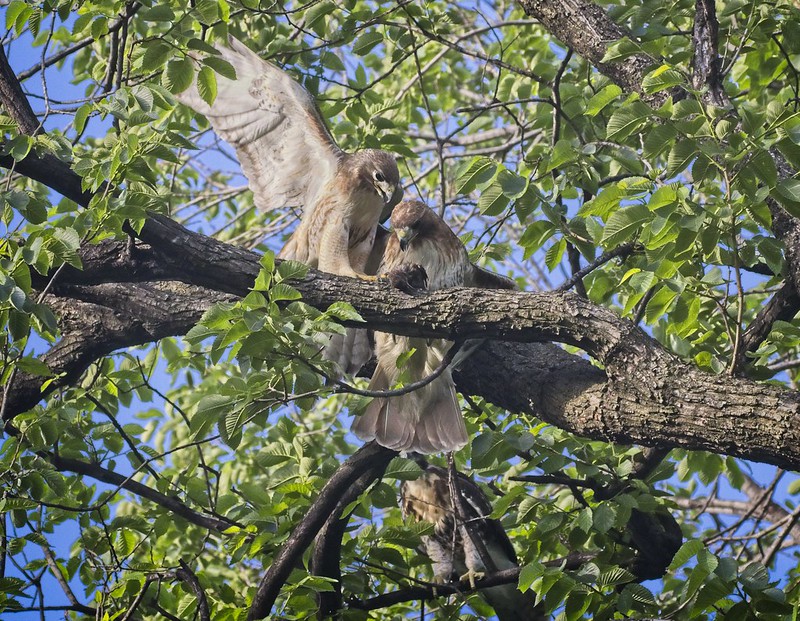 She takes the food from Christo and prepares it for the fledgling. 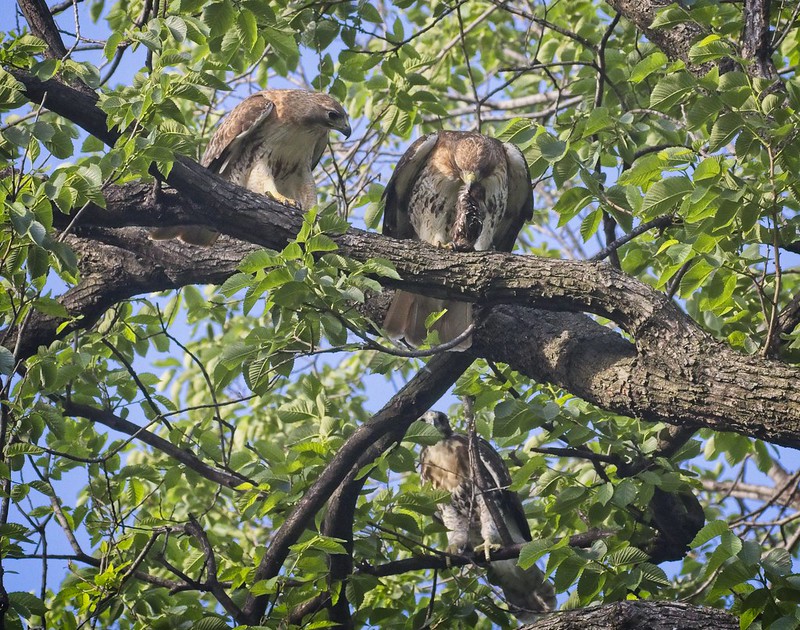 This photo is from a different day, but the same process has just occurred. Amelia is on the left with prey that was dropped off by Christo, and the fledgling is on the right waiting to be fed. 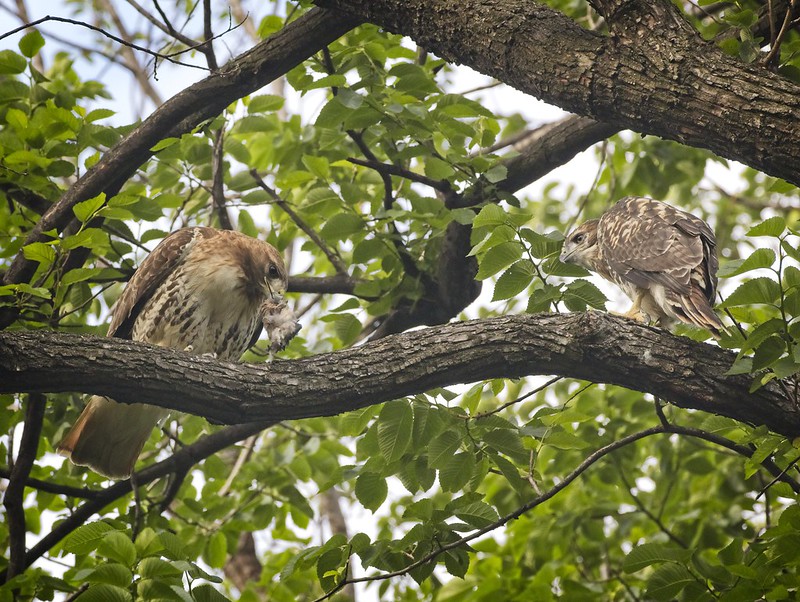 Thursday morning, I heard the cries of one of the fledglings as I entered the park. Following the sound, I found the fledgling perched next to mom, Amelia, begging for breakfast. 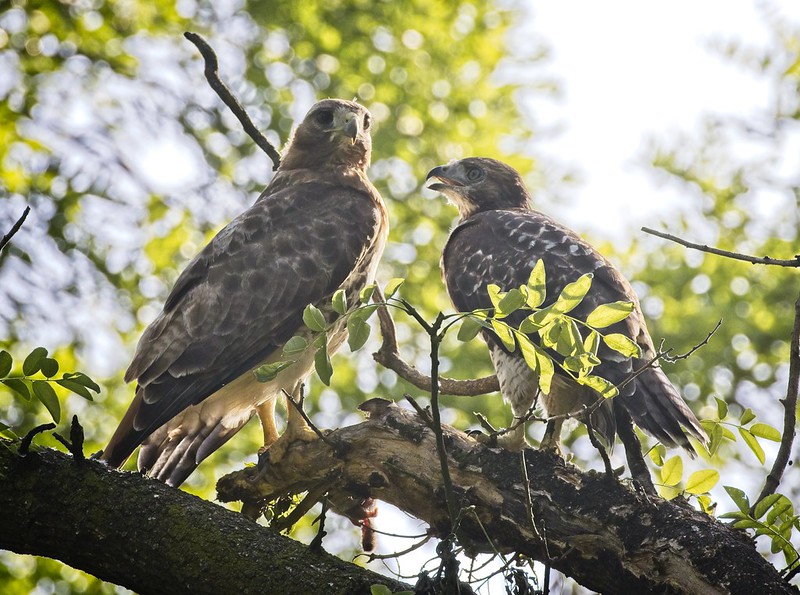 As dad, Christo, was late with the food delivery, the fledgling kept nipping at Amelia's beak, begging for food. Although they are full size, the fledglings are still kids. 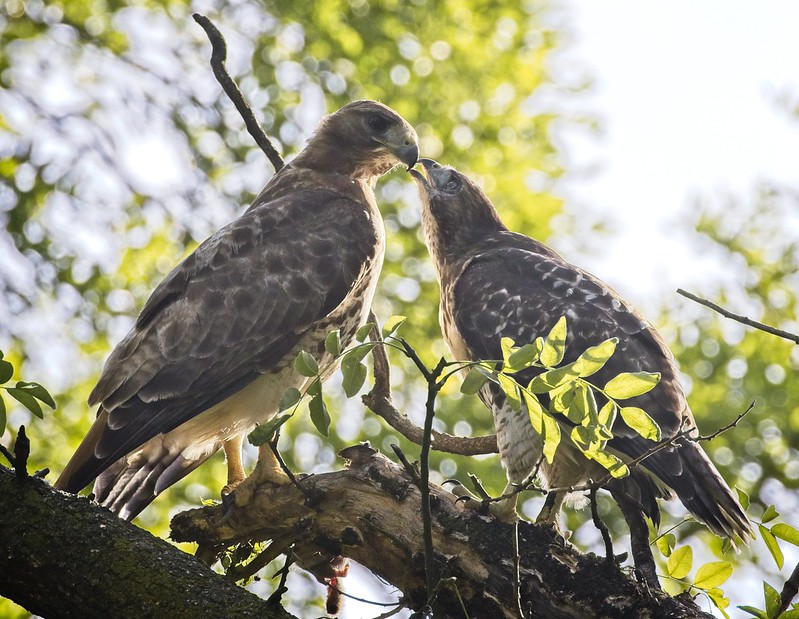 Amelia has been extremely attentive to the fledglings in recent days. Her main duties were to take care of the chicks when they were in the nest, and now that they have fledged, it's Christo's job to feed them and teach them to hunt. However, Amelia has continued to stay close to all three fledglings and assist in feeding them. Below, she hangs out with one of the fledglings (left). 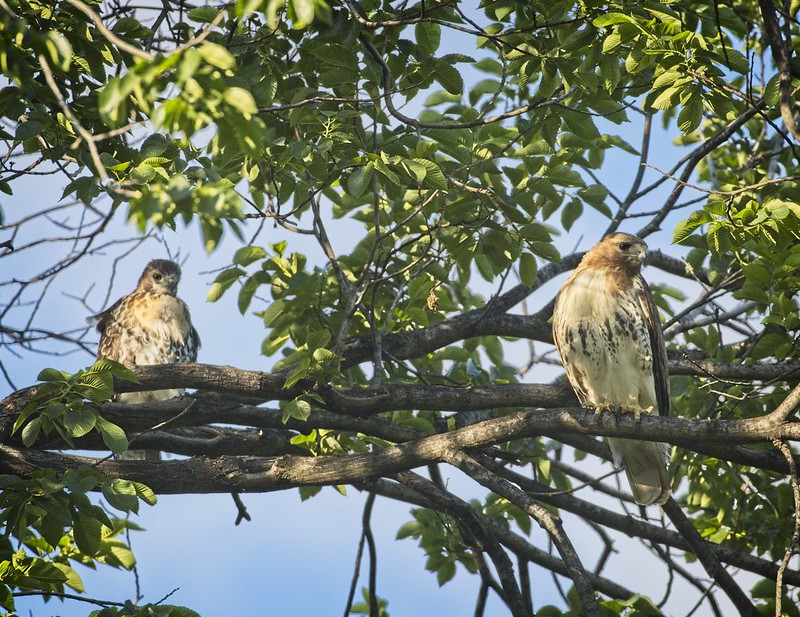 As I said, the fledglings are full grown and are generally the same size as their parents, but they still look like babies. Over the next few days, the remaining down will disappear from their faces and they will look more like adults. Note the white down around the eyes and mouth of this chick. 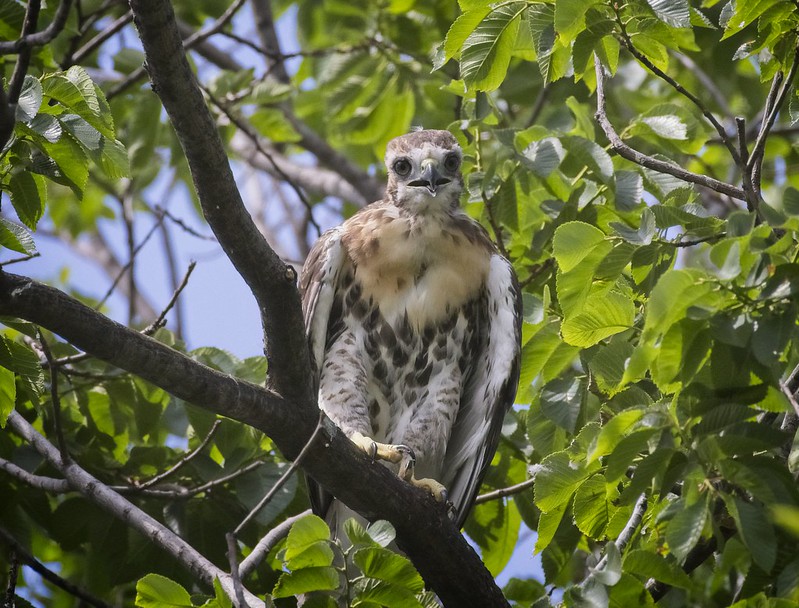 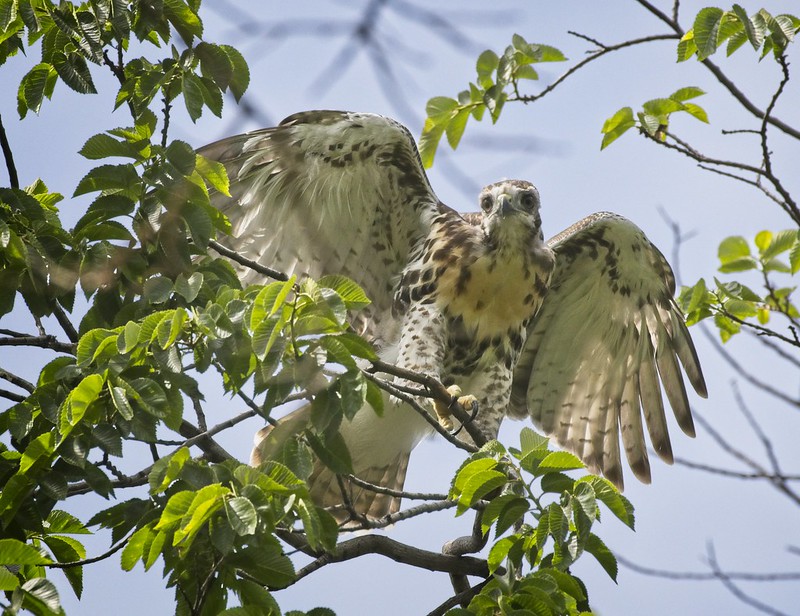 This is one of the other fledglings, who has a more advanced looking brown head. The yellowish color on their chests will remain for a few weeks before it turns white. 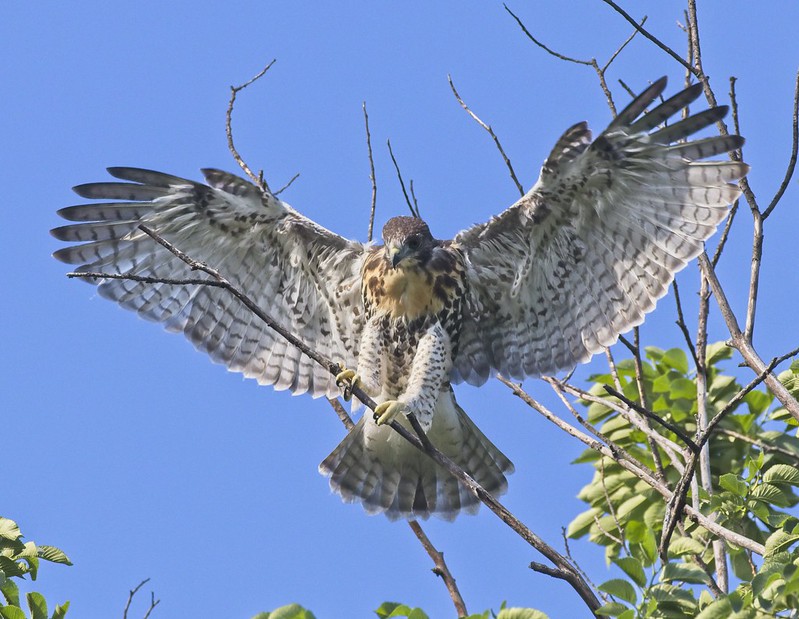 Here is another example of flying with the landing gear down... 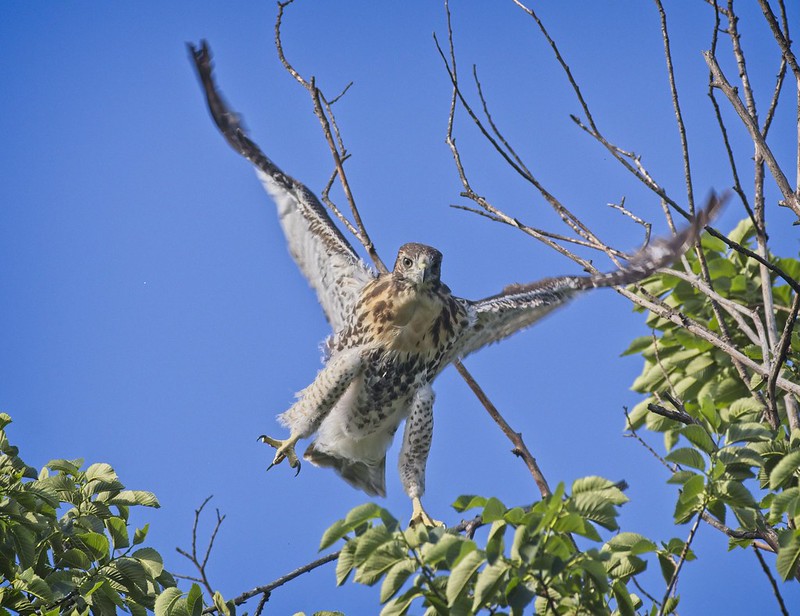 Another way to distinguish the kids from the adults is their coloring. In addition to the yellow chests, the young hawks have dark brown speckling on their legs and their eyes are a light yellowish green. Both Christo and Amelia have faint brown barring on their legs and brown eyes. 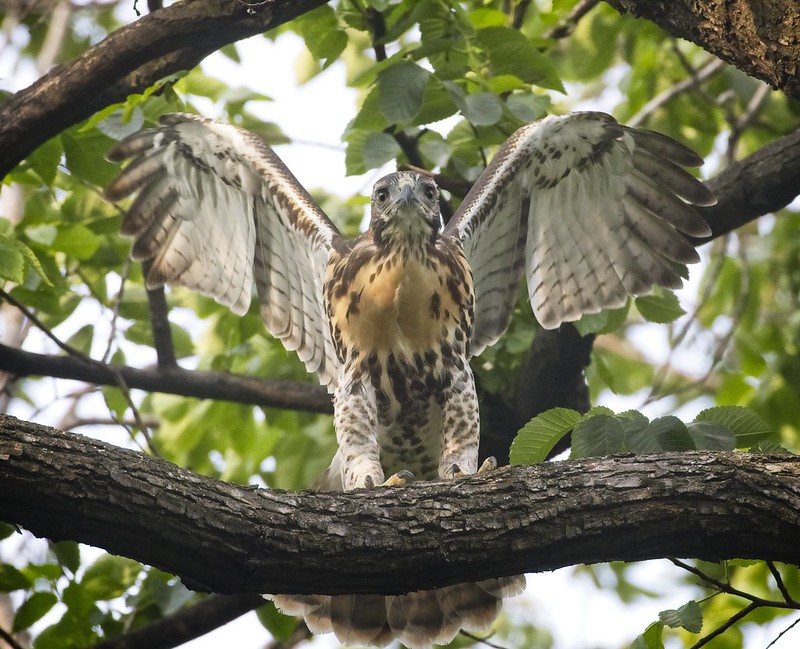 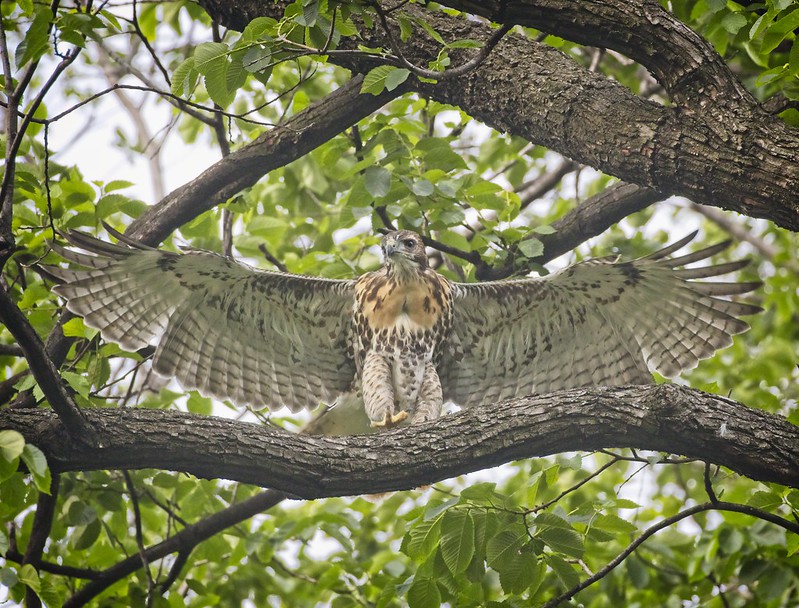 The tails of the adults and juveniles are also different. Christo and Amelia both have the rusty red/orange adult tails while the fledglings have brown striped tails. This is an easy way to tell them apart in flight. 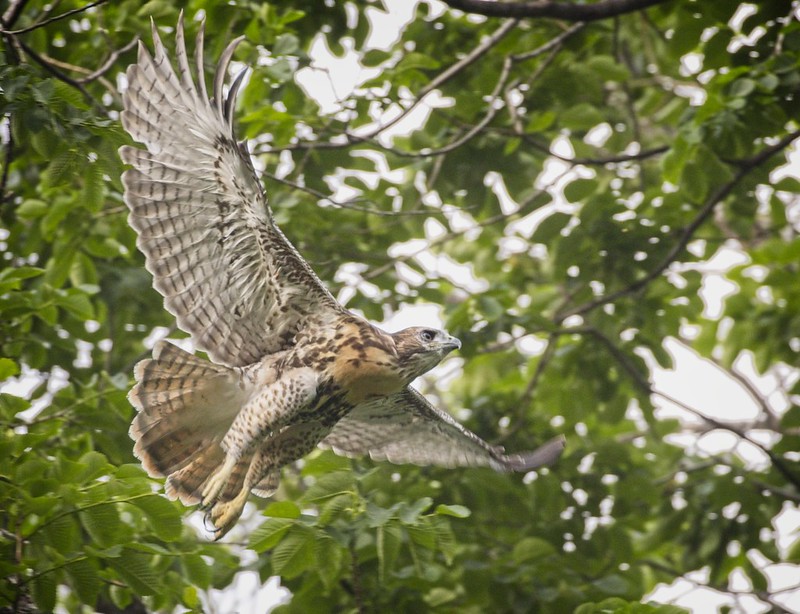 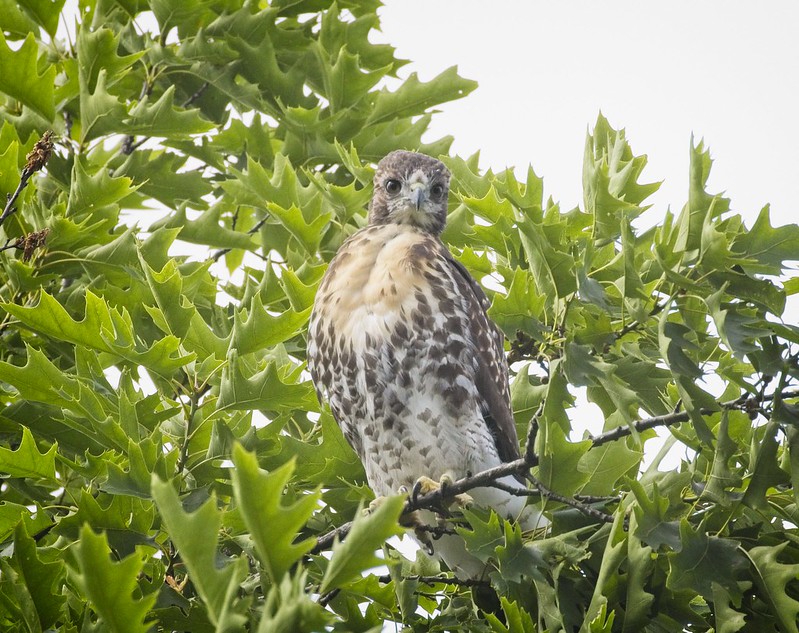 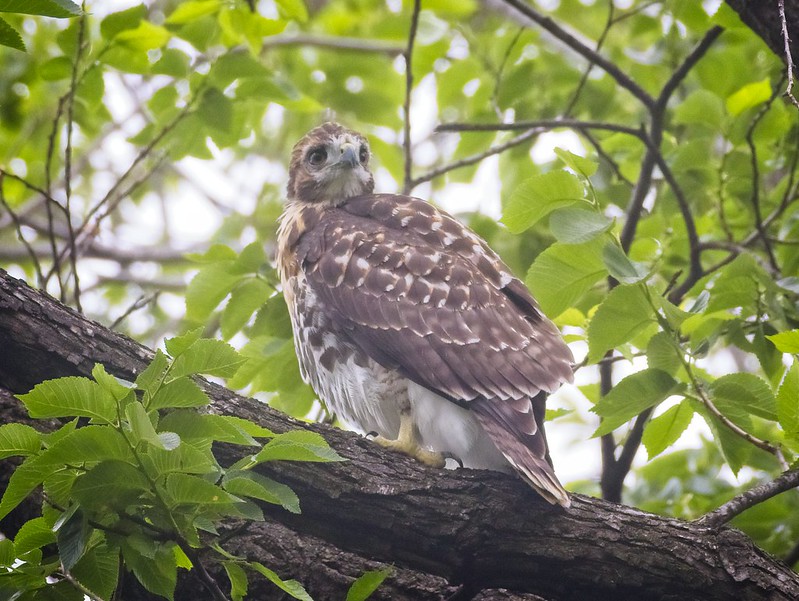 As the fledglings are now exploring the park, they are getting to know their neighbors. Some are curious about the new little hawks, like this acrobatic squirrel. 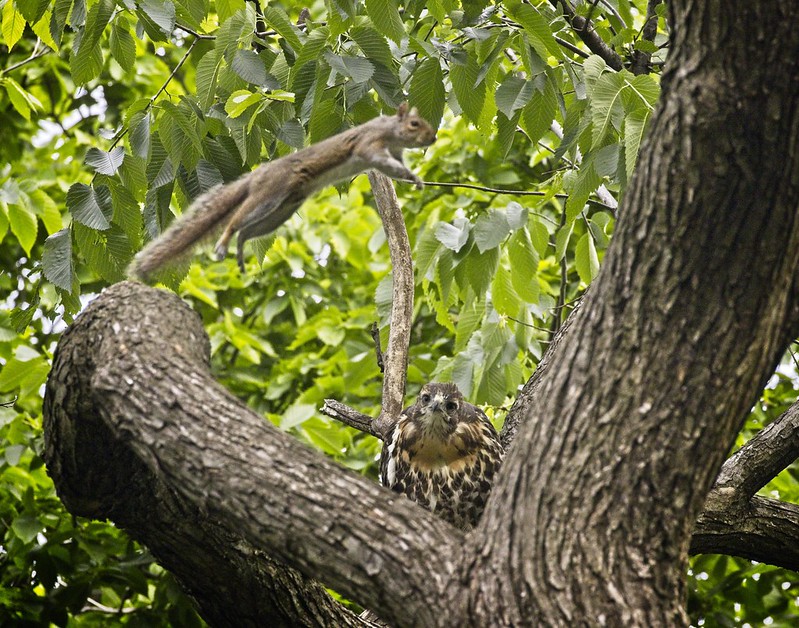 Others are not so friendly, like this blue jay, who relentlessly dive-bombed one of the fledglings. 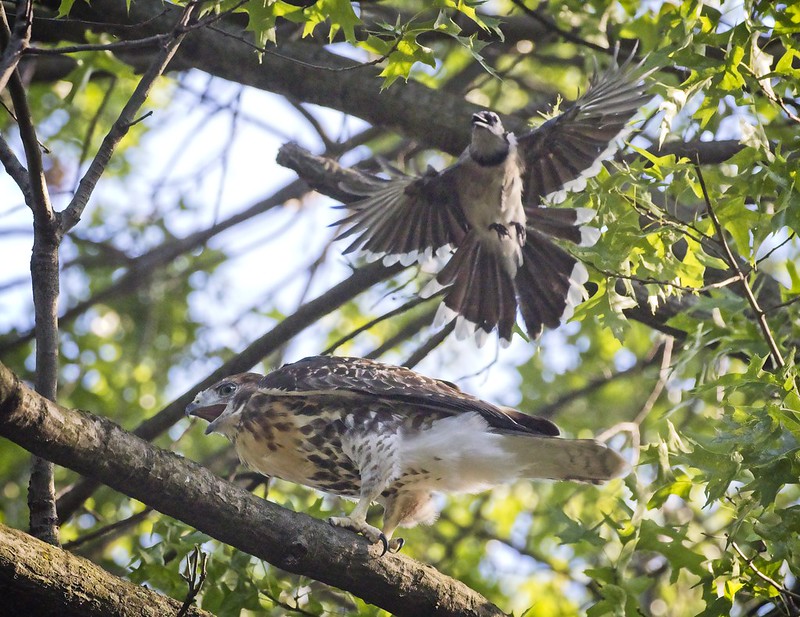 The young hawk has not done anything to deserve this treatment from the jay, but they are natural enemies and, once the hawk learns to hunt, it will become a threat to birds like blue jays and robins. However, at the moment, the three young hawks are harmless and are just getting to know their world. 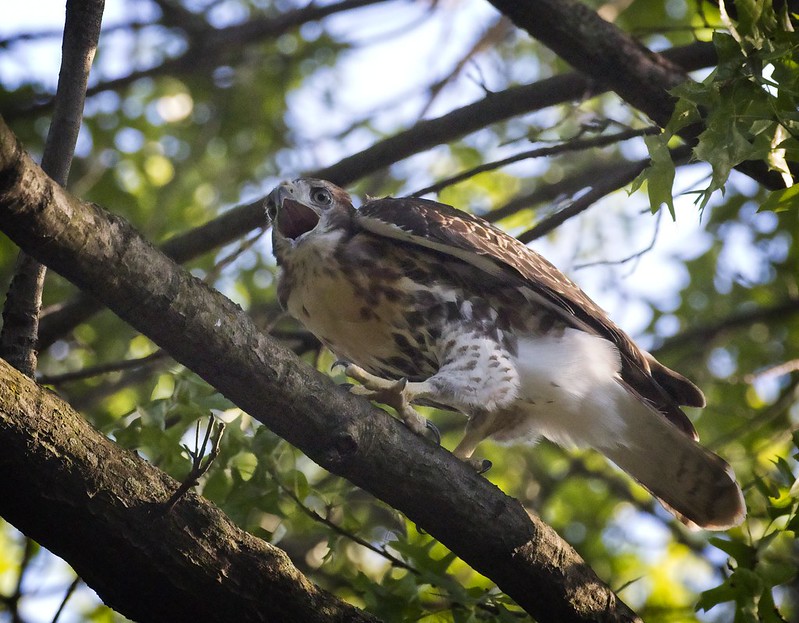 Meanwhile, dad Christo gets harassed by a kestrel as he flies around the park. Being annoyed by other birds is just part of hawk life and is something the fledglings will have to learn to endure.

You can see many, many more recent hawk pics over on my Flickr page.
Posted by Laura Goggin Photography at 11:21 AM