Today we caught our first glimpse of a chick in the Tompkins Square red-tailed hawk nest after observing a hatch a week ago.

Until now, all we've been able to see is parents, Christo and Amelia, looking down into the nest. 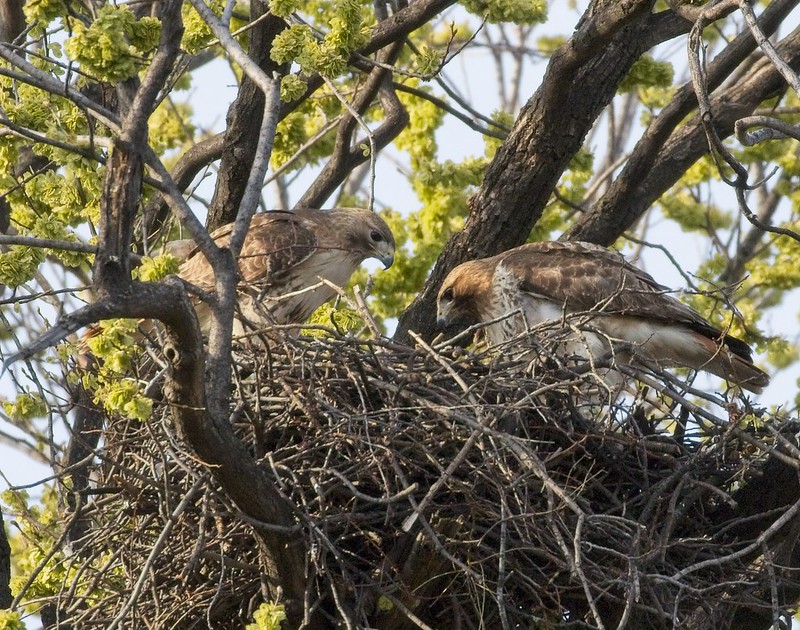 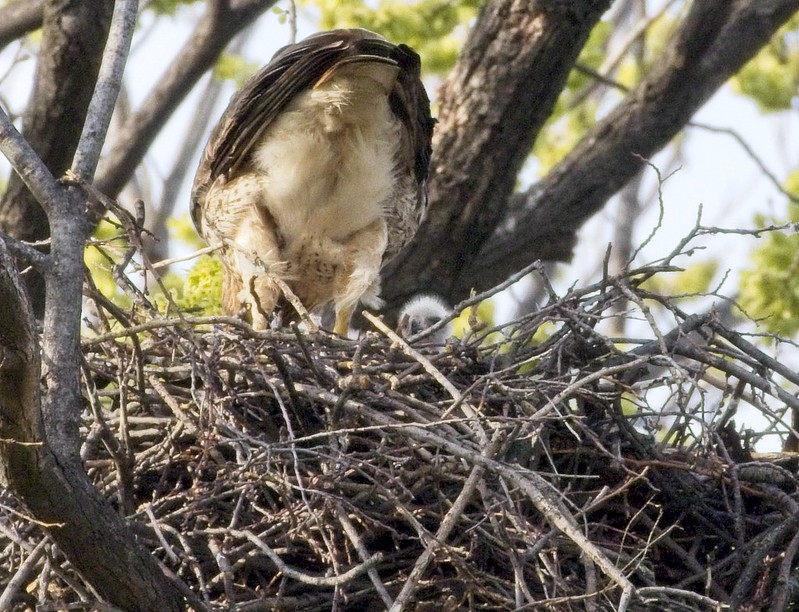 Below, Amelia gently feeds the chick a tiny piece of meat. 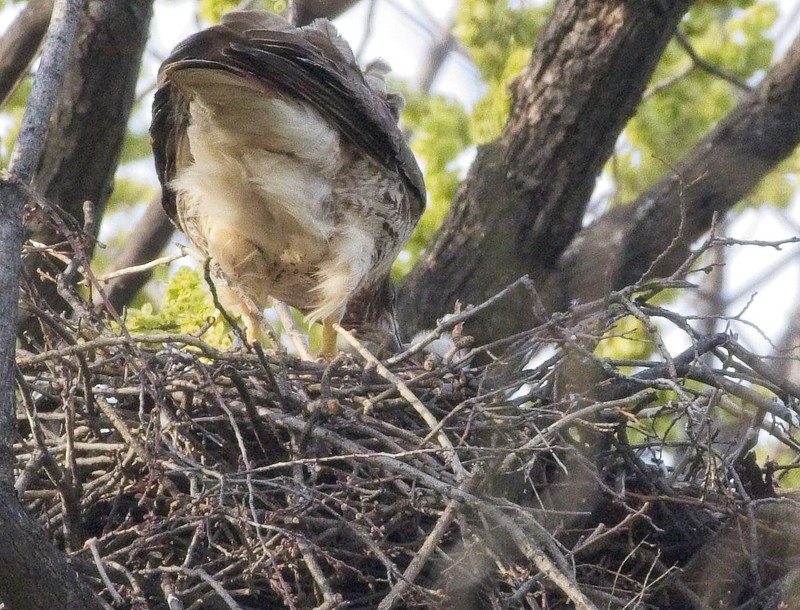 In the videos below, you can see the little one bobbing up and down as it gets fed.

In about a week, the chick will likely be tall enough to see clearly over the edge of the nest. 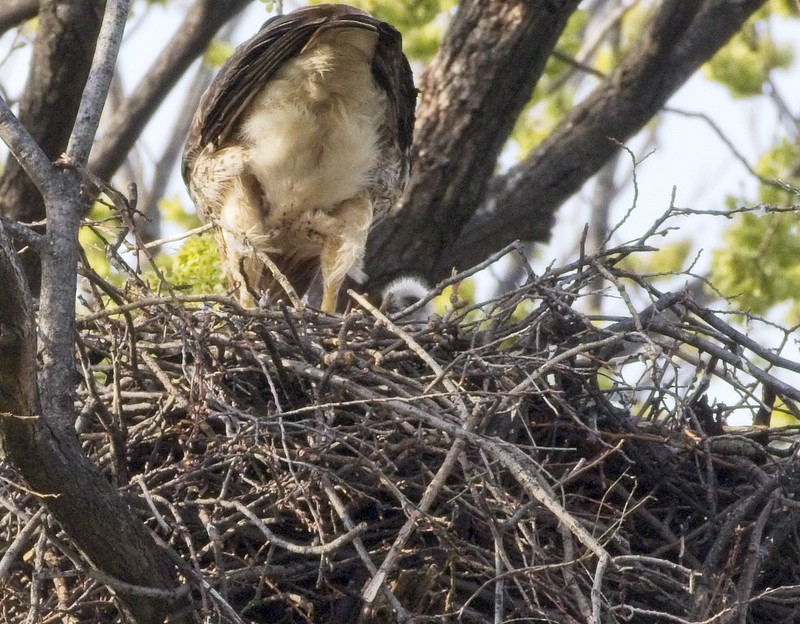 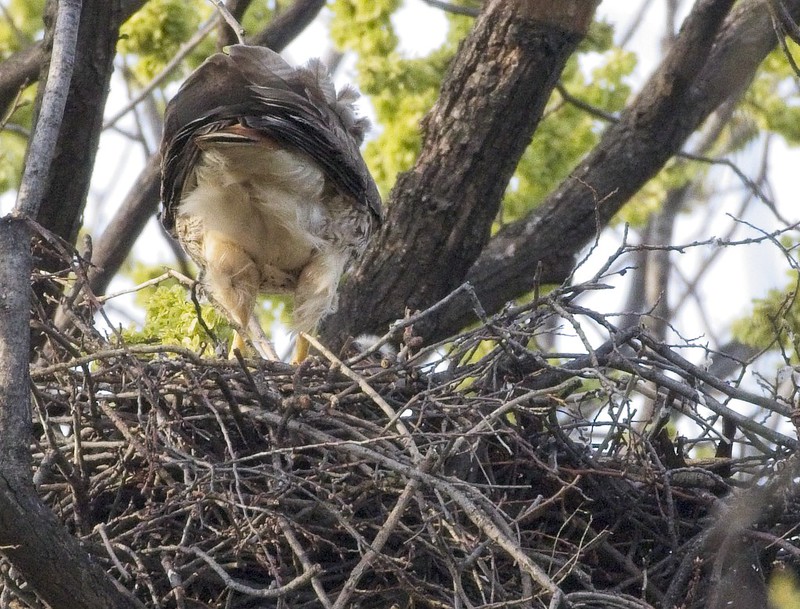 Could there be more than one chick? Today, I could only confirm one, but there could definitely be one or two more. Last year, there were three chicks, so I'm hoping for more, but we'll have to wait and see.

UPDATE: As of April 29, we can confirm TWO chicks. Urban Hawks has posted some nice video showing Amelia wit the two little ones.

Posted by Laura Goggin Photography at 8:54 PM No comments:

Early Wednesday morning, it was obvious there had been a hatch at the red-tailed hawk nest in Tompkins Square. Most notably, the behavior of the hawks dramatically changed.

In the weeks leading up to that day, Christo and Amelia had a usual routine of brooding, turning the eggs, and switching places so Christo would incubate and Amelia could take a break and stretch. They continued this behavior through the evening of April 20.

Early the following morning, Christo perched on the edge of the nest while Amelia stayed inside. He appeared to be watching and/or waiting, something we've seen him do on hatch days in previous years. The hawks stayed in this position for over two hours, which is also notable. Finally, Amelia got up and the two of them fussed around with some food, Christo watching as Amelia tore it up, then went through the motions of feeding a chick deep in the nest. As she did this, Christo stayed close on a nearby branch. 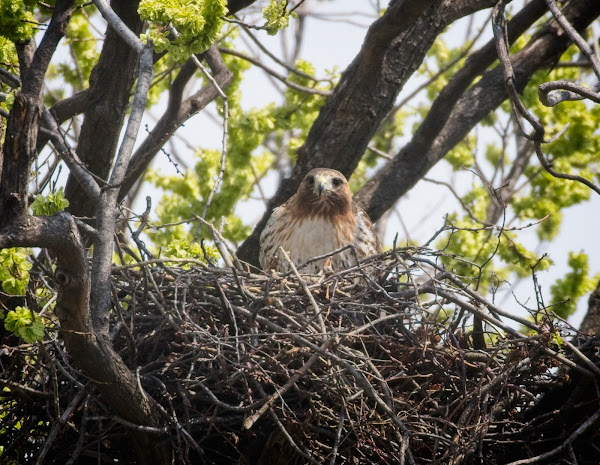 When Amelia was done, she settled back down in the nest and I went to get some coffee. Christo also took that opportunity to go catch a big rat. We both returned to the nest and I took some video of Christo making the rat delivery. Amelia clearly wasn't ready for it yet, so after some back-and-forth, Christo took the rat away for his own breakfast.

After a while, Amelia performed another feeding. The hatchling is too small to be seen from outside the nest, so all we can see right now are the motions Amelia makes as she tears off a piece of food and feeds it to the chick below. 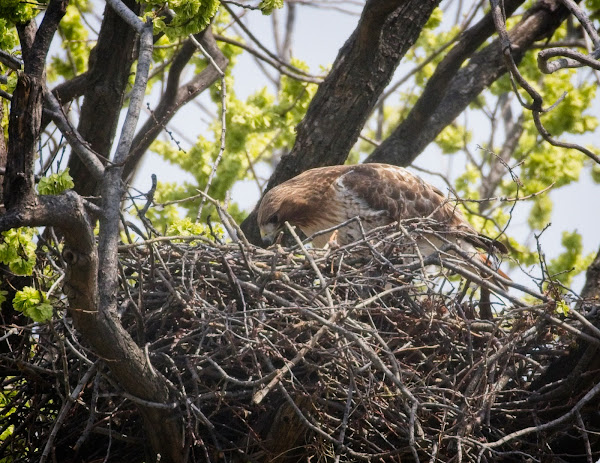 Photos don't show the feeding well, so I took another video:

Brunch over, Amelia stretches before settling back down into the nest. 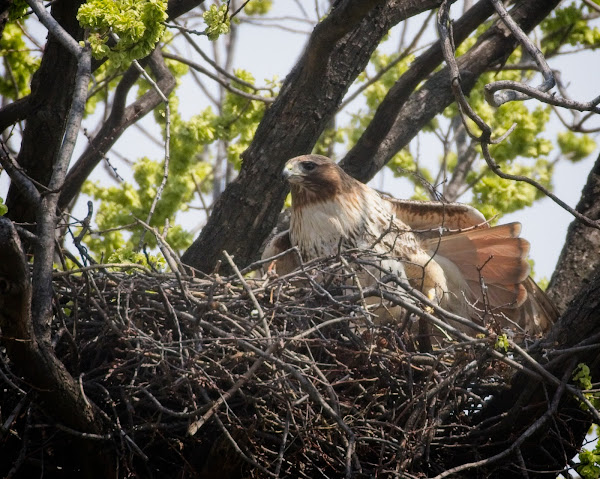 Wednesday was a day of crazy weather, including a sudden hail storm. As the thunder rumbled, Amelia went deep into the nest and Christo, to my surprise, rode out the storm atop the cross of St Nicholas of Myra on Avenue A. I've seen him perch on high church crosses and the park flag pole for thunderstorms before, so I was concerned. Would he be struck by lightning?!?

In the video below, you can see and hear how hard the hail is coming down, but Christo pays it no mind.

The storm only lasted a few minutes, but it was enough to turn streets into rivers, and leave hail stones behind in non-paved areas of the park. 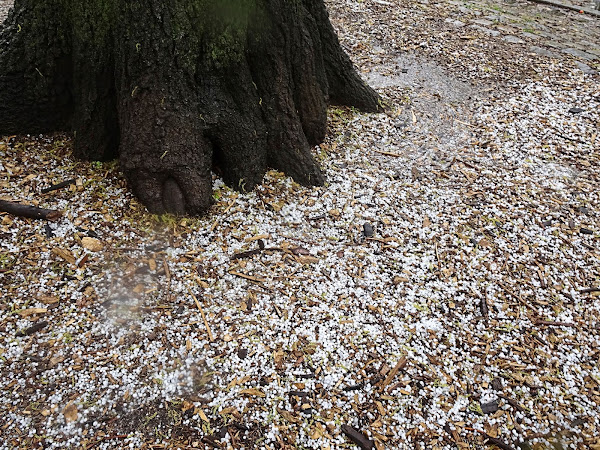 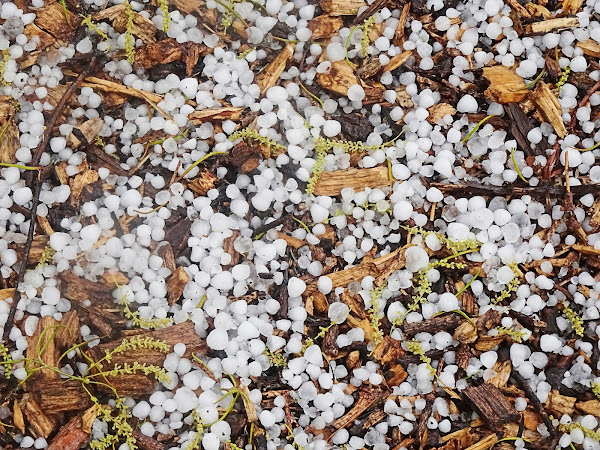 The storm also caused a spooky mist to rise from the ground, which blanketed the entire park. 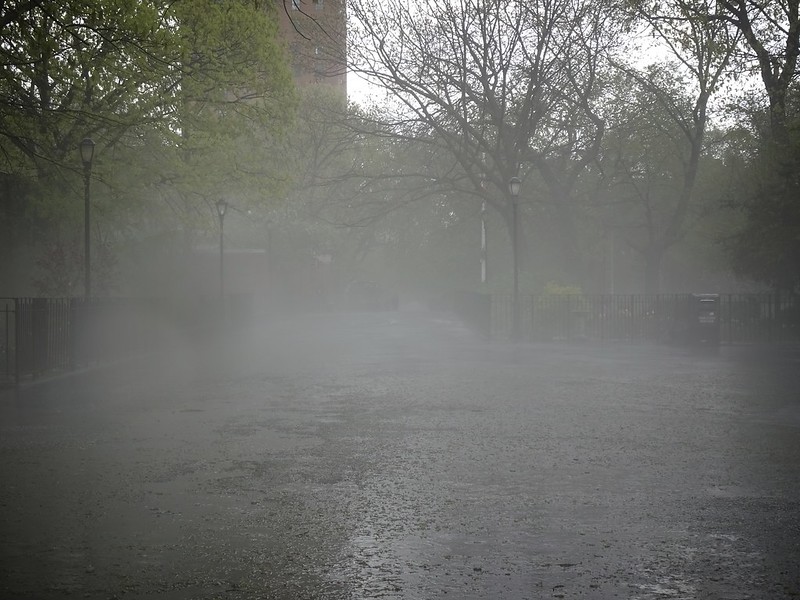 The mist dissapated in seconds. 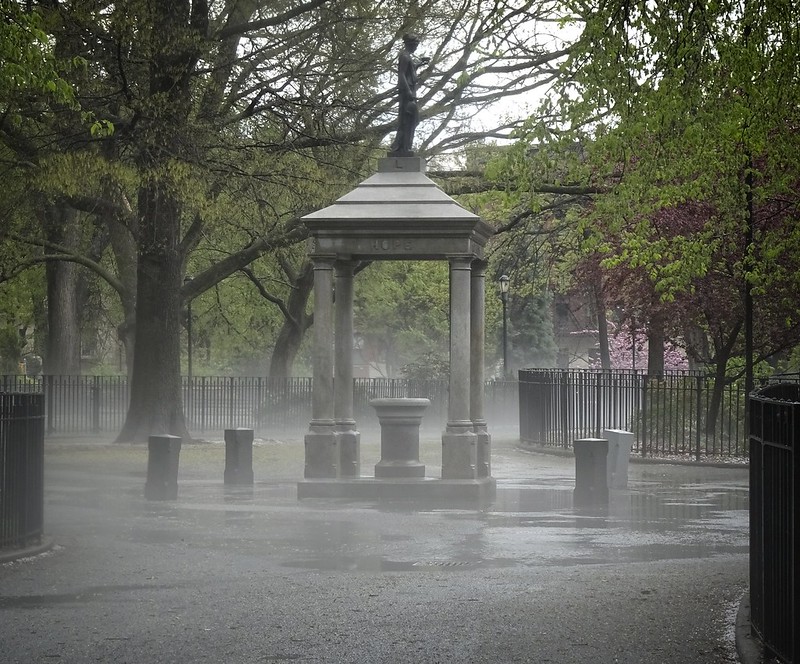 A minute later, it was as if the storm had never happened and we returned to a beautiful sunny spring day. 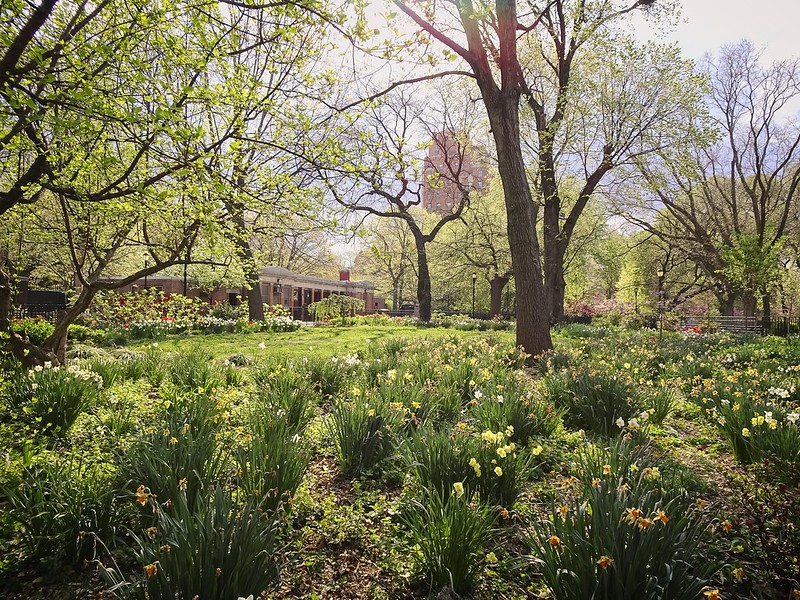 The rain and hail should not harm the hawk eggs or chicks as long as the parents keep them well covered. Both Amelia and Christo are experienced and skilled at being hawk parents, so I'm not worried. We have no idea how many eggs or chicks there are in the nest, but can expect 1-3 nestlings. It may be another week or so before we catch a glimpse of any fuzzy white heads peeking over the edge of the nest, so we'll have to wait and be surprised.

For updates on other hawk nests in the area, check out Urban Hawks, who covers several nests around Manhattan.

Posted by Laura Goggin Photography at 3:33 PM No comments:

We're on hatch watch this week in Tompkins Square Park for red-tailed hawks, Christo and Amelia. 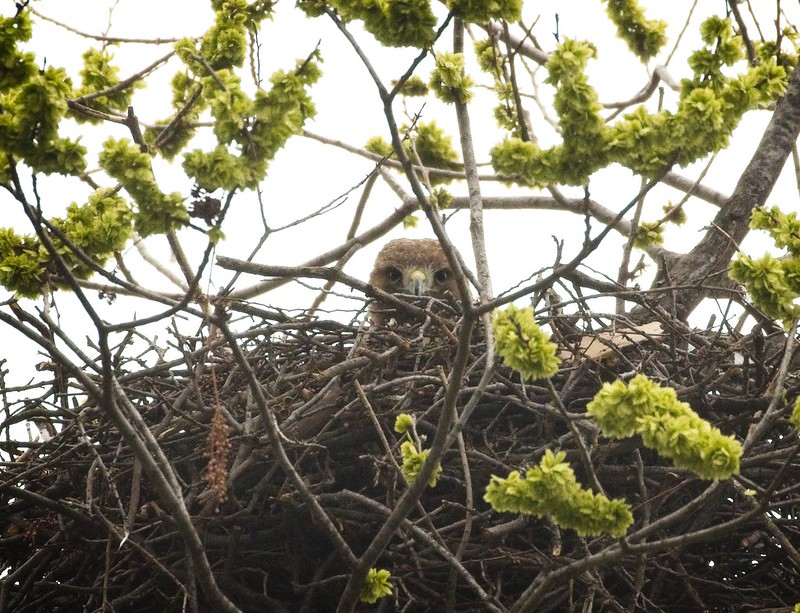 The incubation period for red-tailed hawks is generally said to be 28-35 days, but our local hawks have always taken longer to hatch. I've put together stats from the last seven years below.

Assuming Amelia laid her first egg March 13, today is day 37, so hatch could happen any time.

Posted by Laura Goggin Photography at 7:36 PM No comments:

It's mid-April, and we still have a couple of weeks to go before any signs of a hatch at the Tompkins Square red-tailed hawk nest. It's a dull time for hawk-watching as nothing much happens at the nest unless you're lucky enough to catch parents, Christo and Amelia, switching shifts for incubation duty.

This is a typical scene at the nest right now: Amelia hunkered down, face peeking above the edge of the nest to check out the activities in the park below. 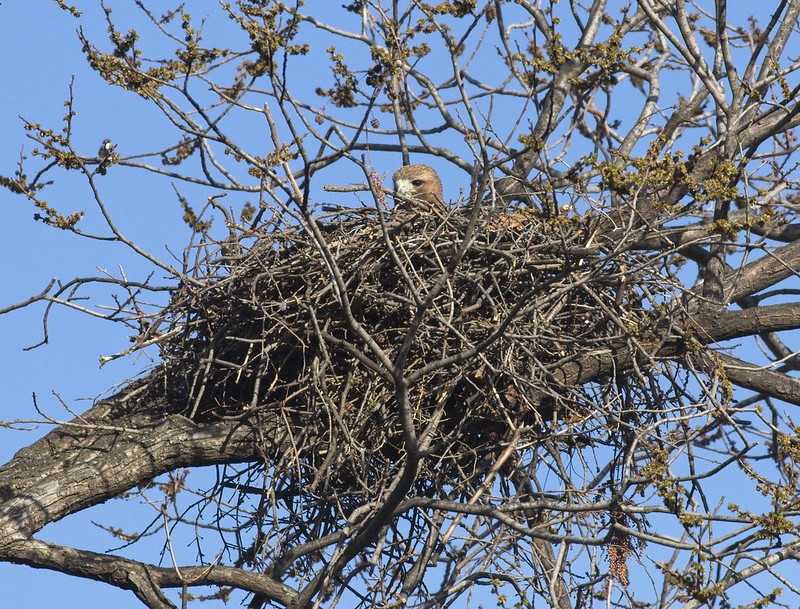 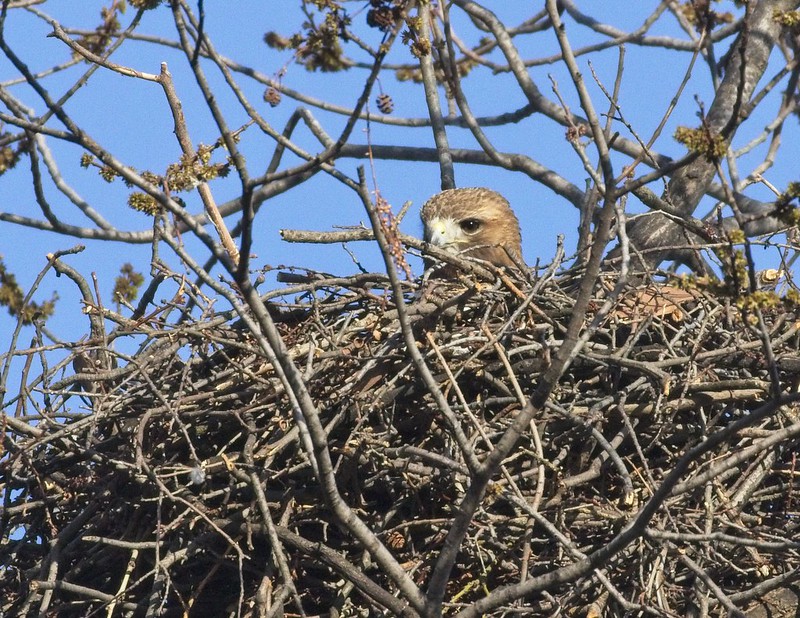 While the hawks continue to brood, it's a good opportunity to tune in to other birds that are moving through the city for spring bird migration. Some are just passing through on their way north, others are settling into the area and staking out their claims to nesting territories. About two weeks ago, I noticed a dramatic increase in the sounds of the birds. Suddenly, I was hearing many new songs to indicate spring is kicking into high gear. If you spend any time outdoors (anywhere), listen closely and the voices of the birds below can be heard.

The Brown-headed cowbird has a distinctive cluck flollowed by an extremely high-pitched whistle. 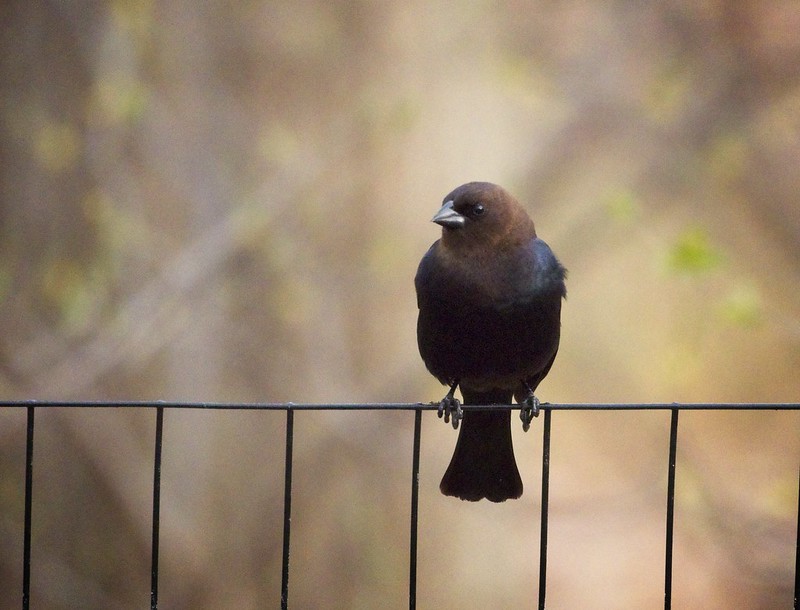 The Tufted titmouse makes a variety of interesting sounds, but the one I've been hearing recently is the two-tone whistle. 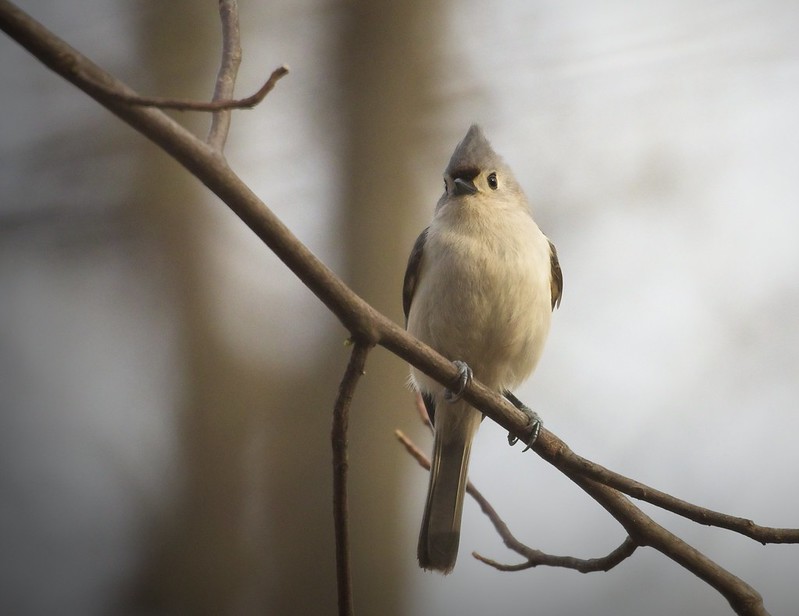 One of my favorite songs belongs to the Northern Cardinal. You can hear the distinctive pew-pew-pew almost anywhere in the city. 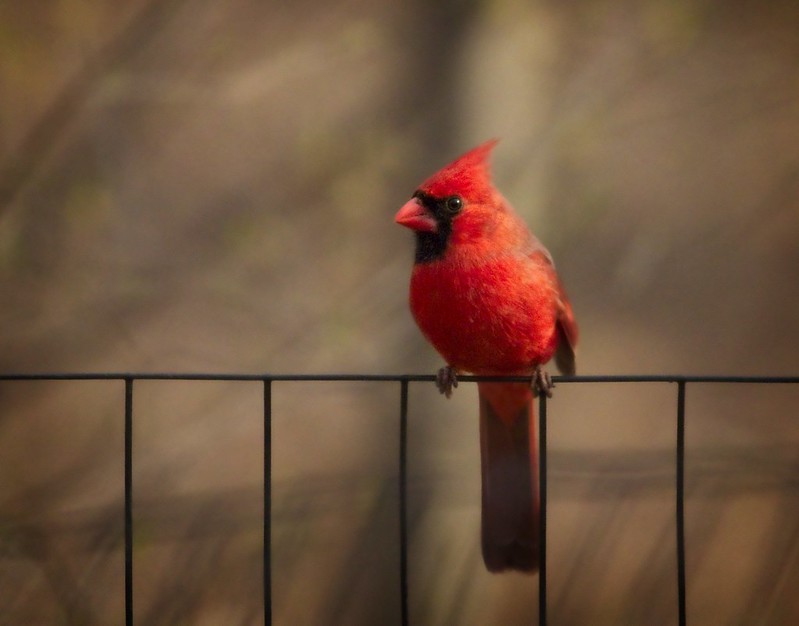 Not as loud, but still very recognizable, is the call of the White-breasted nuthatch. Once you hear it, they're pretty easy to spot moving up or down the trunks of trees. 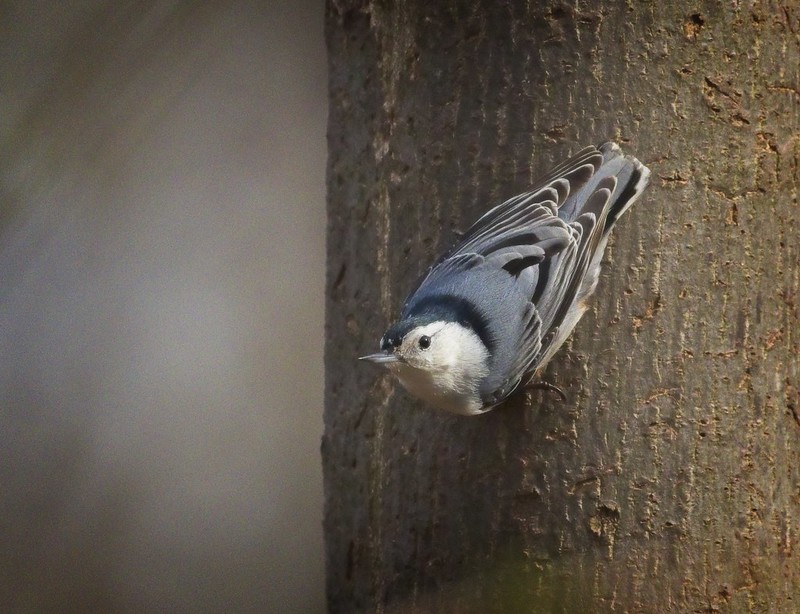 I hadn't really noticed until recently how beautiful the color pattern is on the underside of their tails. 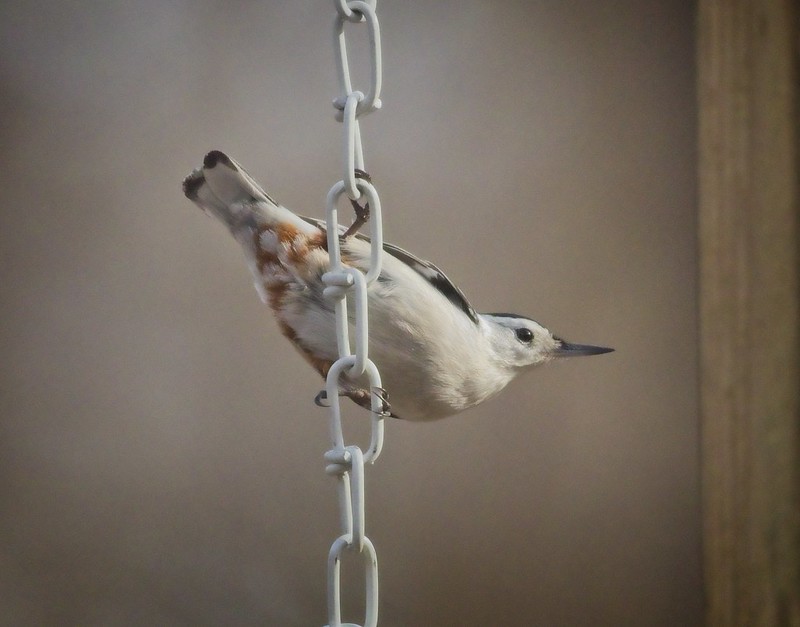 The call of the Downy woodpecker reminds me of a broken fan belt, and their hammering is surprisingly loud for such a tiny creature. 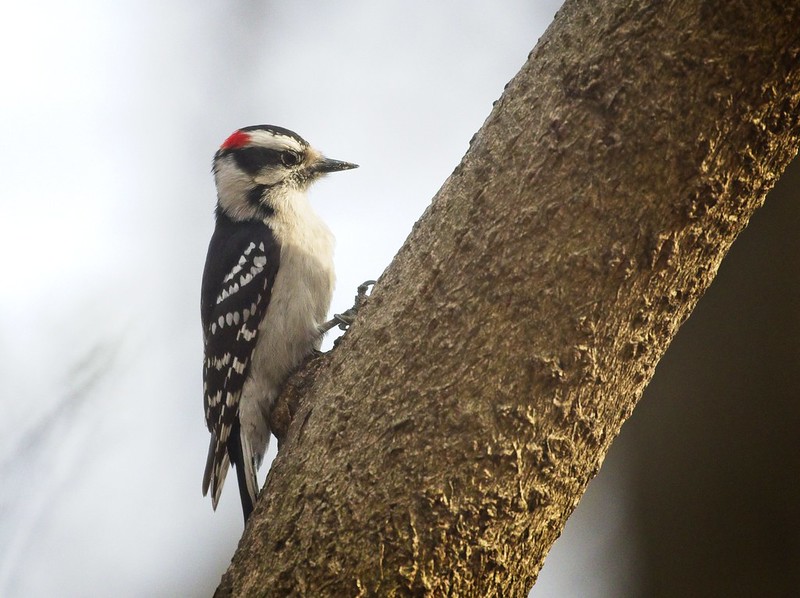 My favorite sparrow, the White-throated sparrow, has a melodious song that can be heard across the park. I am accustomed to their eight-syllable song, but recent research is revealing that the White-throated sparrow's tune is changing across the continent. Will the song we hear now be forgotten in the future? It's an intriguing study in bird behavior. 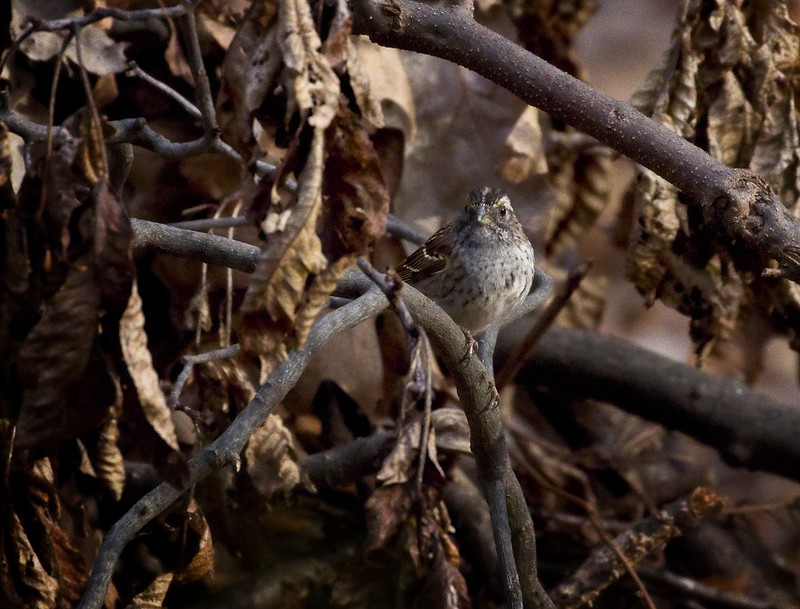 My other favorite sparrow, the Chipping Sparrow, makes a mechanical trill that could be mistaken for an insect. These sparrows are tiny, and can usually be found foraging on the ground. 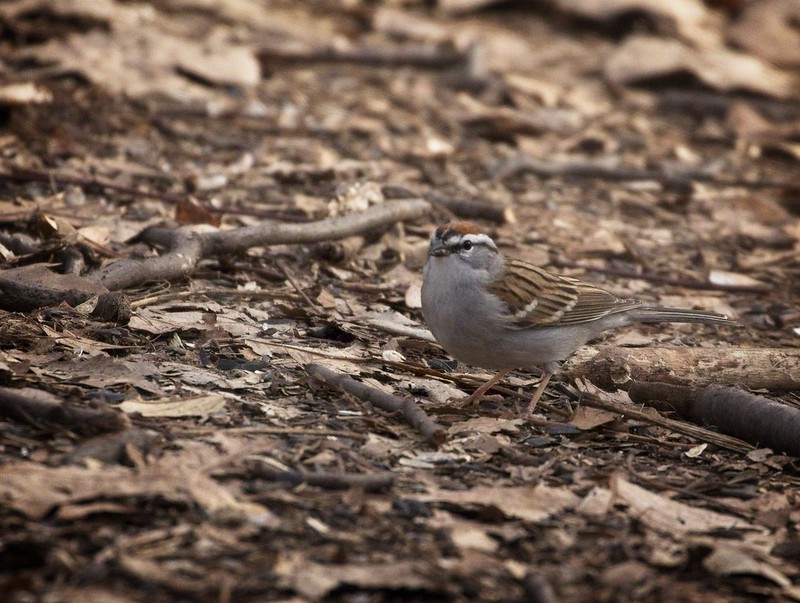 There is a particular elm tree on the east side of Tompkins that is attracting American goldfinches recently. They have a sweet song that sometimes sounds like a question followed by an answer. 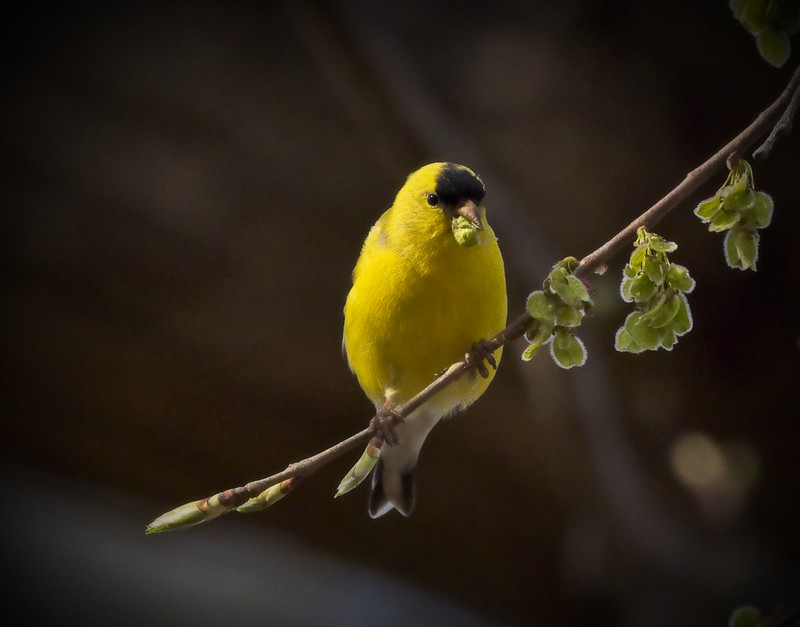 For me, the iconic bird song that says "Summer is on the way" is that of the Red-winged blackbird. The males of the species migrate to the nesting grounds first and battle each other for territory. Good places to see and hear them are around the Meer at the north end of Central Park, and Hammock Grove on Governors Island. 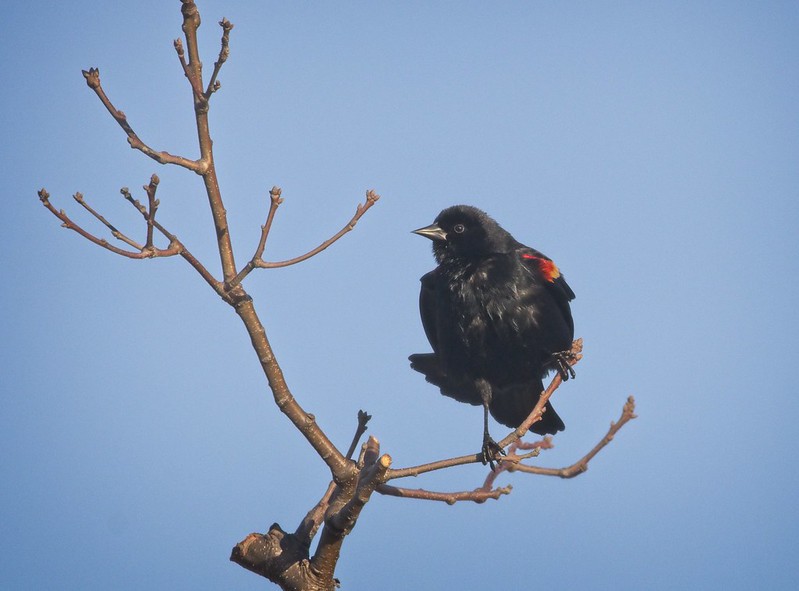 The other song that announces the arrival of spring and summer is that of the Song sparrow. This little bird can really belt it out, and they are often found in the same habitat as the blackbirds. 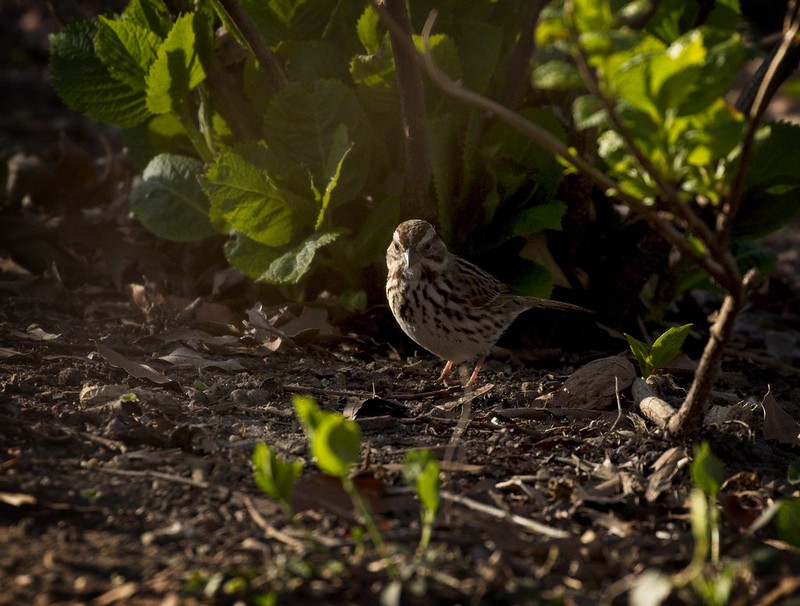 When Governors Island re-opens to the public for the season on May 1, I recommend visiting Hammock Grove and listening to the cacophony of Red-winged blackbirds and Song sparrows. Both species nest there and their voices can be heard throughout the island.

Posted by Laura Goggin Photography at 8:27 PM No comments: