NYC Council Speaker, Corey Johnson, and the NYC Department of Health and Mental Hygiene are hosting a free virtual Rat Academy on Wednesday, September 23 from 5-7 PM. 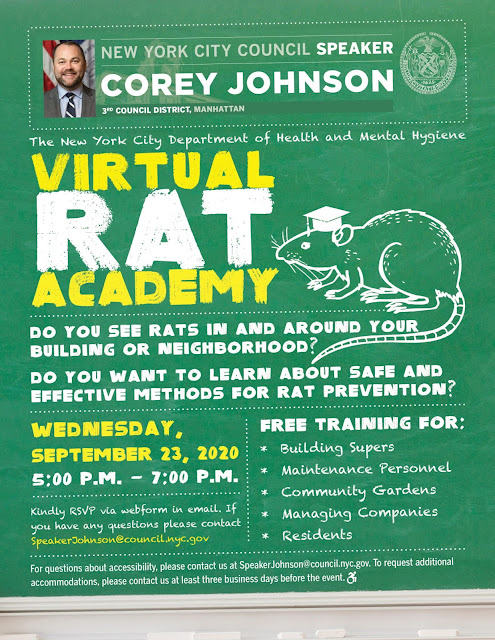 You can register for the event here.

If you can't make the session on September 23, there will be another on Wednesday, September 30 from 4-6pm.

I've attended Rat Academy in the past and highly recommend it to everyone - the focus is on safe and effective methods for rat prevention in your building and neighborhood, and is open to all. Learn more about the program here.

Posted by Laura Goggin Photography at 9:56 AM No comments:

Migrating birds and the 9/11 Tribute in Light

Fall bird migration is well underway and it happens to coincide with the 9/11 Tribute in Light here in Manhattan. The birds are flying south at night, and they can be confused and disoriented by the bright lights. Volunteers from NYC Audubon were on hand Friday night to monitor the birds and to advise the tribute organizers to periodically shut off the lights when too many birds gathered in the beams. I decided to go downtown to check it out and to see how many birds I could spot.

Around 9pm, the lights were clearly visible and the birds were, too - they could be seen with the naked eye and resembled bright bubbles swirling up and down within the bright columns. 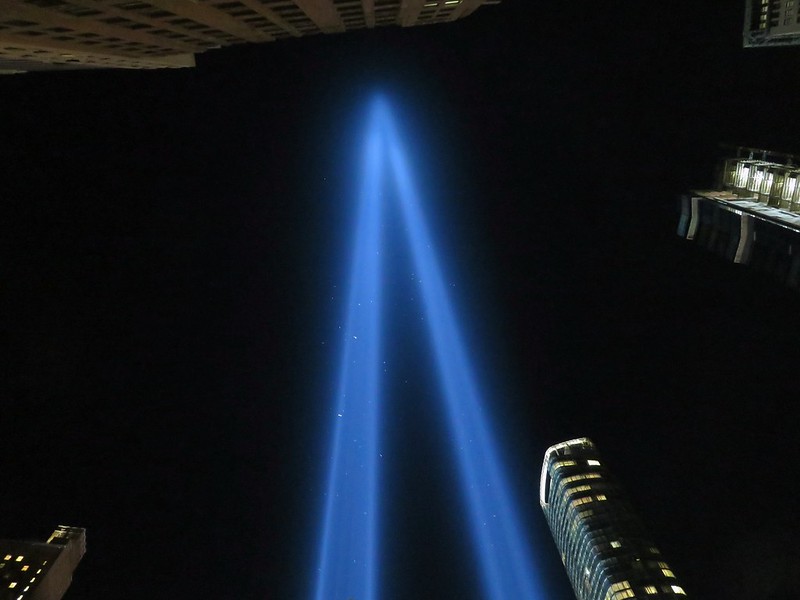 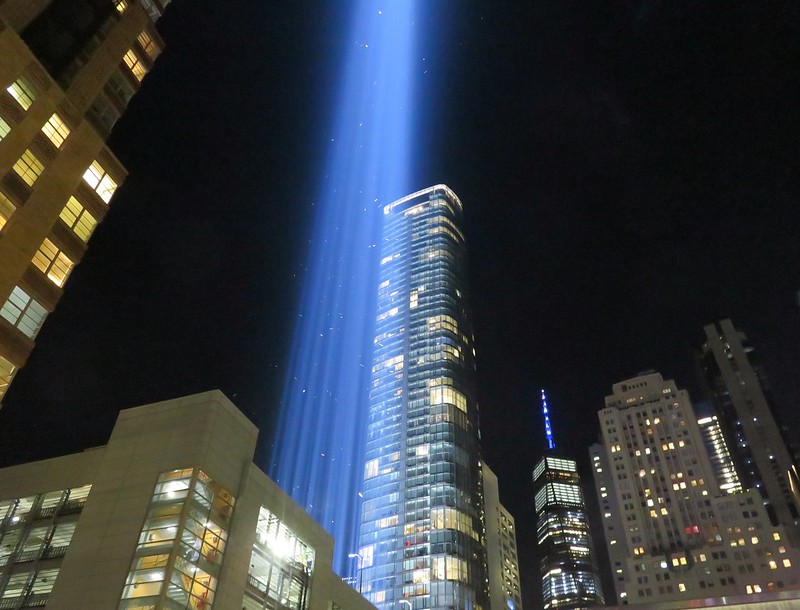 Birds could be seen throughout the cylinders of light and many people down below had no idea what they were looking at. I heard several people say they thought the specks were trash or paper, and many were surprised to discover they were observing live birds flying at night. 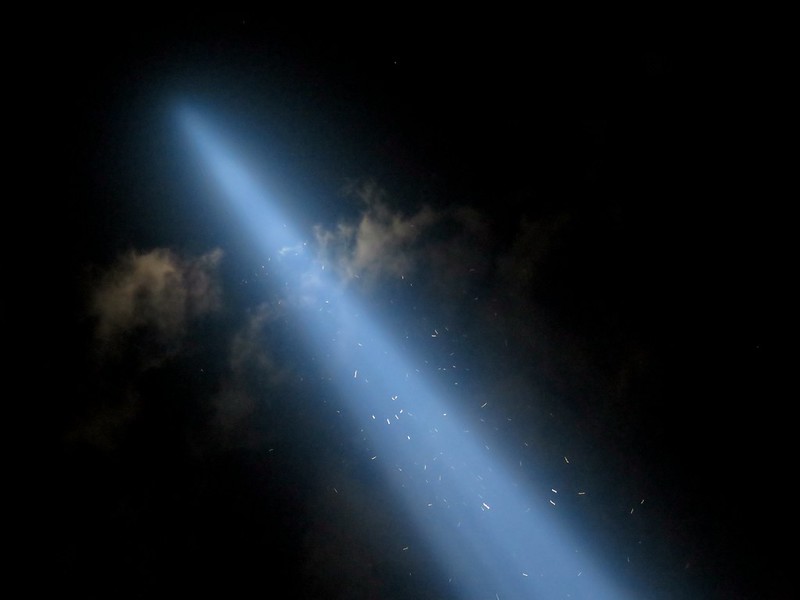 I took a few videos to show the movement of the birds, which looked like fireflies in a lava lamp.

I attempted to take photos to try and identify the individual bird species. I was able to confirm a common nighthawk and several types of warblers, but the bright lights, dark sky and fast movement of the birds made photography a challenge. There is an eBird hotspot page for this location that lists 80 species seen to date flying through the lights.

The Sierra Club has published a good article with more information about the Tribute in Light and what is being done to monitor bird migration during this annual emotional event.

Posted by Laura Goggin Photography at 7:09 PM No comments:

It's a somewhat quiet time of year for hawk-watching as most fledglings have dispersed from their nesting areas and the adults take a well-deserved break from raising their young. The hawks that nest here in the city do not migrate, so they remain in their territories, but there's not usually too much action this time of year.

As I said in an earlier post, I missed the entire nesting season for the red-tailed hawks of Governors Island, but was able to see the two fledglings after the island reopened to the public in late July. I was only able to spot one fledgling on that initial visit, but when I returned to the island on August 5, I lucked out and saw both fledglings together.

When I arrived, one youngster appeared on the weather vane at Liggett Hall. 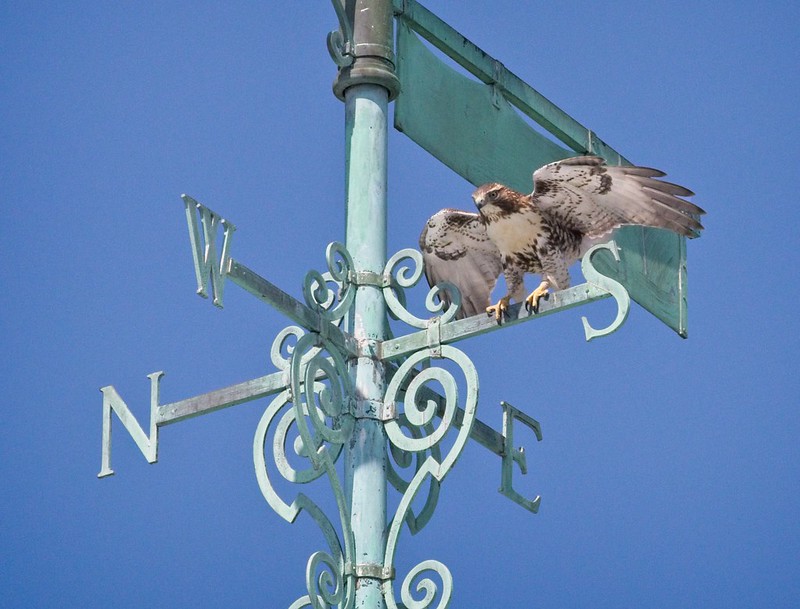 It was then joined by its dad, pictured below on the left. 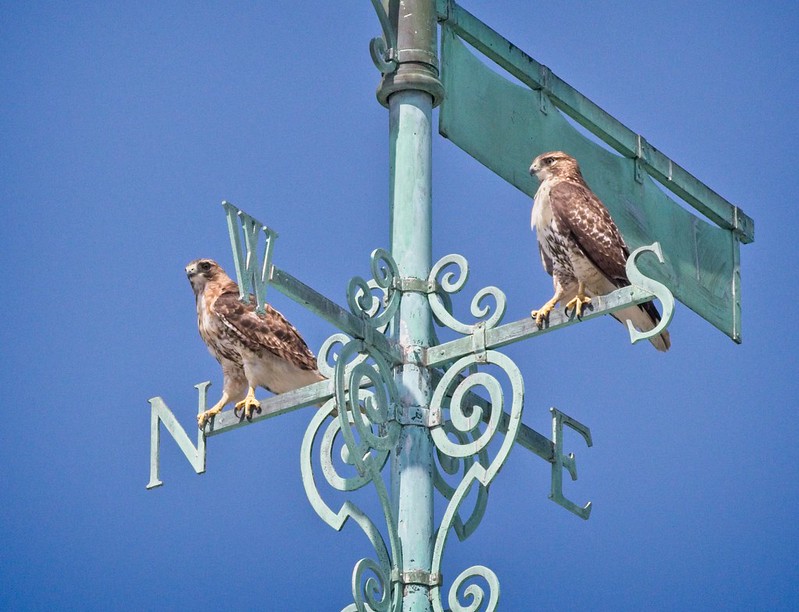 When the male took off, I could see he was still in the process of molting - he only had seven tail feathers (normally twelve), was missing several flight feathers, and his head looked a bit scruffy. 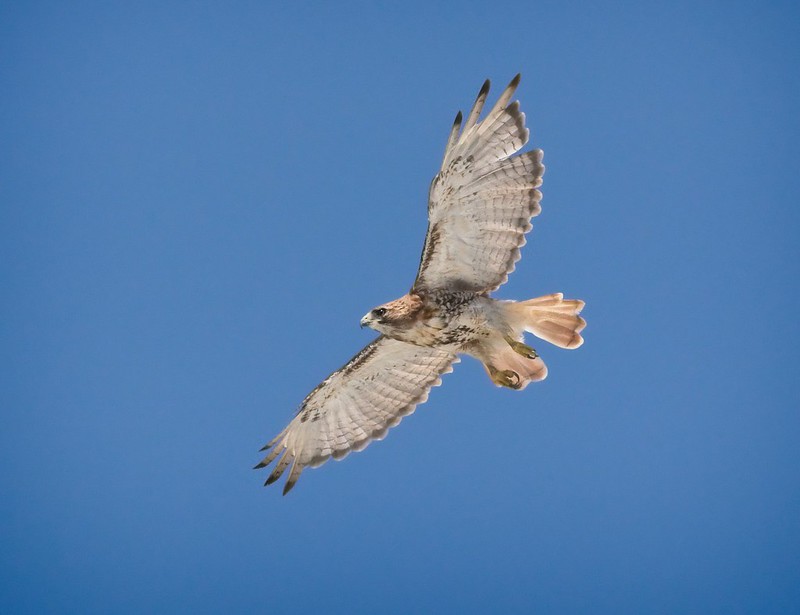 As he flew, he was joined by a Fish Crow (also molting). They also nest on the island and can be very territorial. 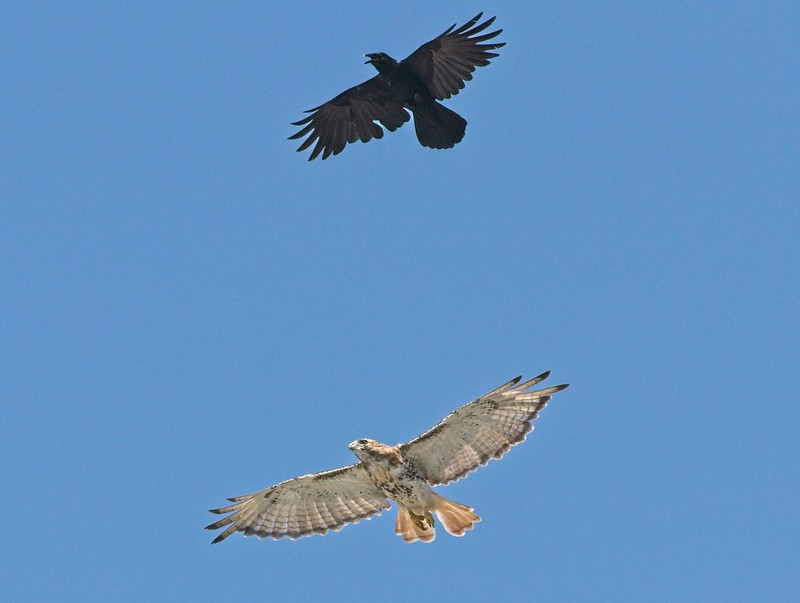 This crow clearly didn't like the hawk and aggressively chased him around. 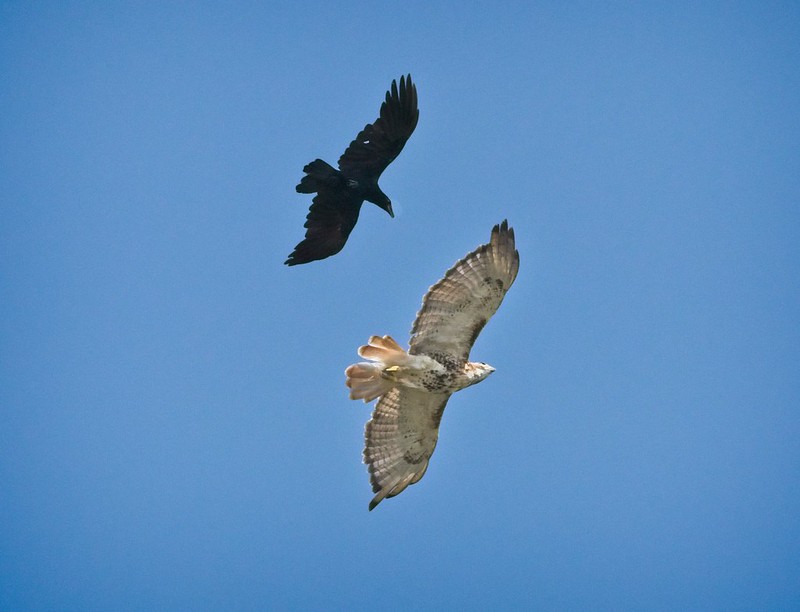 As I was focused on the adult male hawk, one of the fledglings interrupted my shot, stealing focus!

You can just barely make out the rusty orange tail feathers of the male in the background, and you can see the difference in the number of outer primary feathers on the adult vs the juvenile. Dad is missing several "fingers" on both wings, while the fledgling has a complete set. 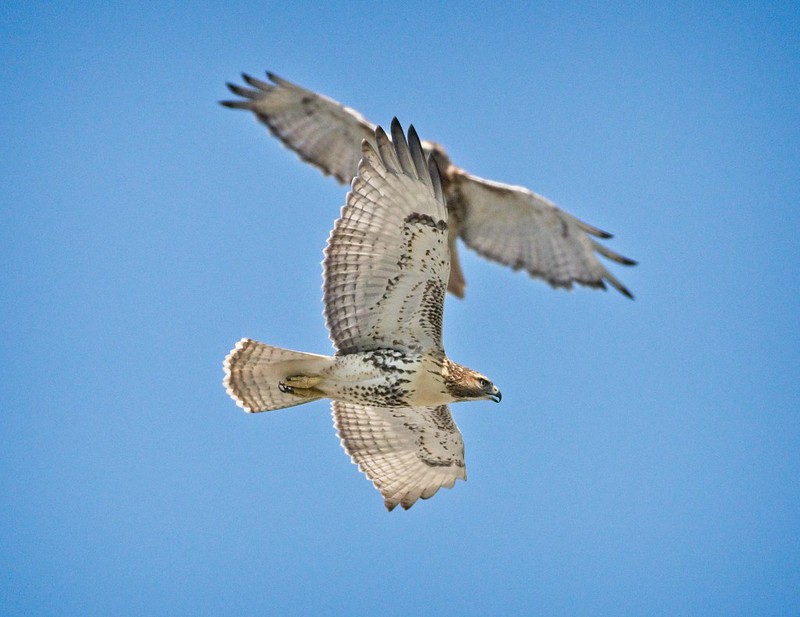 This is the juvenile: 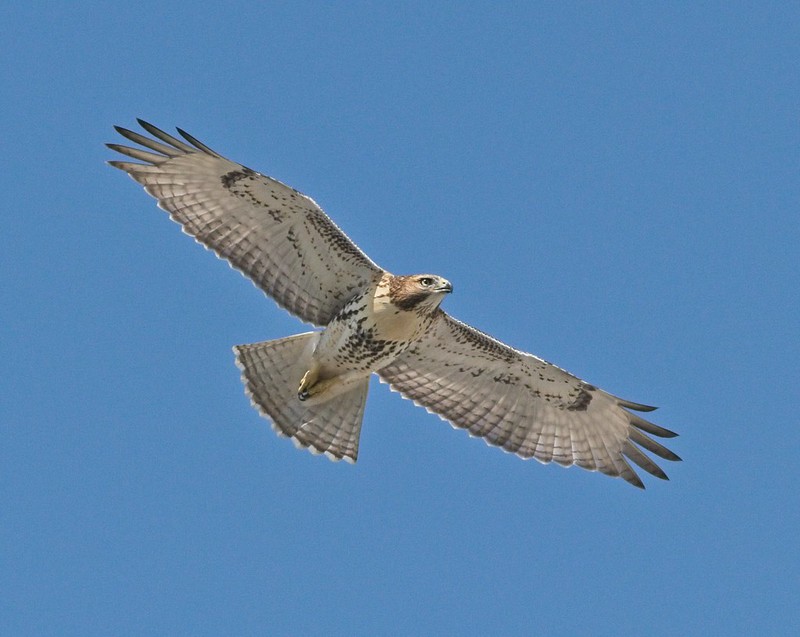 To my surprise, the second fledgling appeared and both of them tussled at the weather vane. 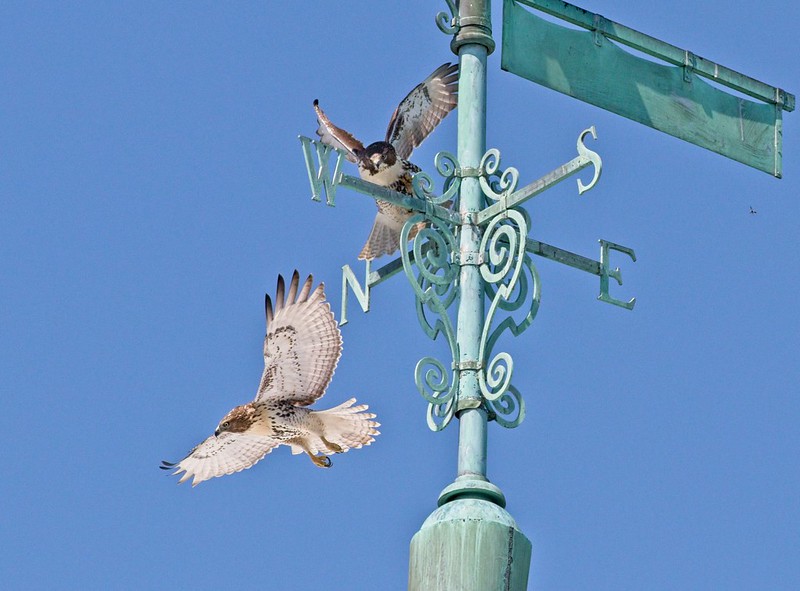 They continued their play on the roof of Liggett Hall. 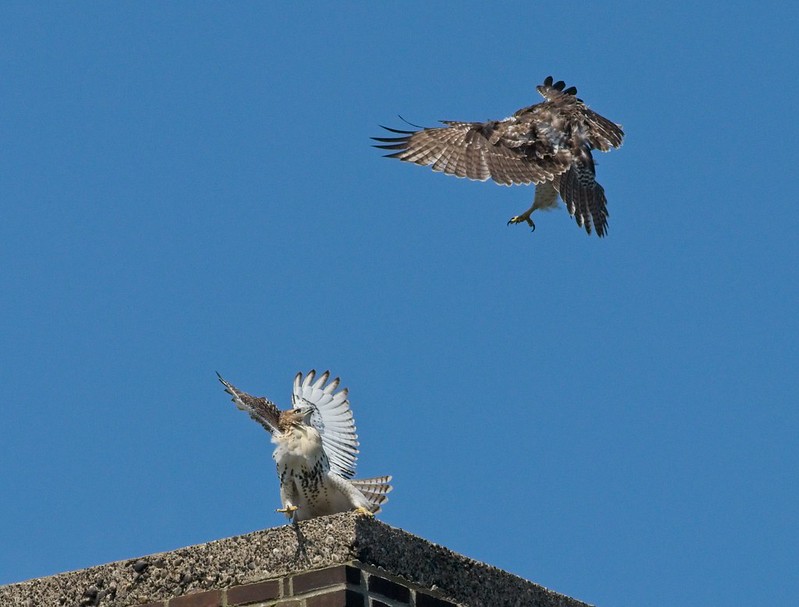 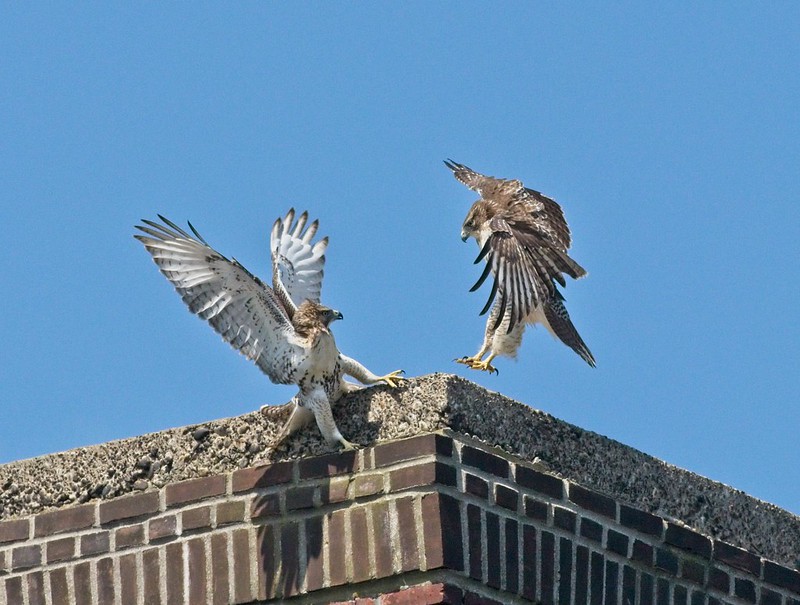 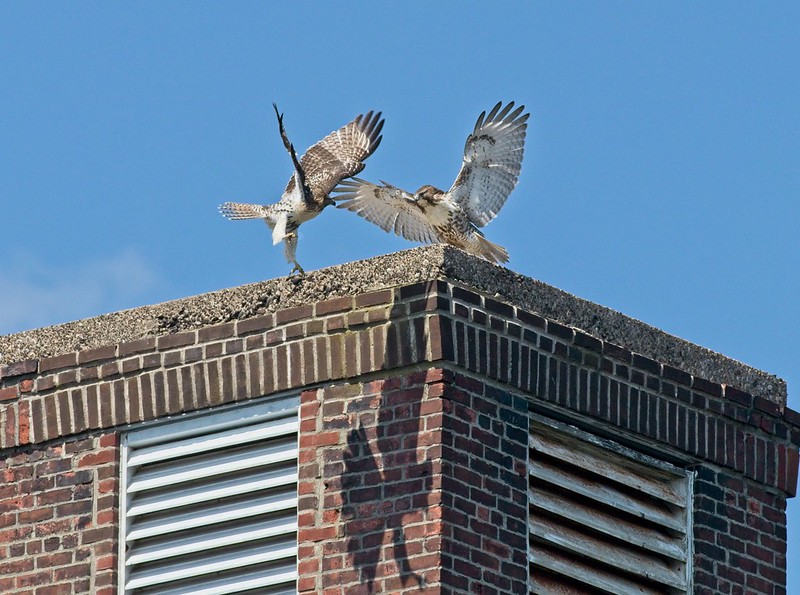 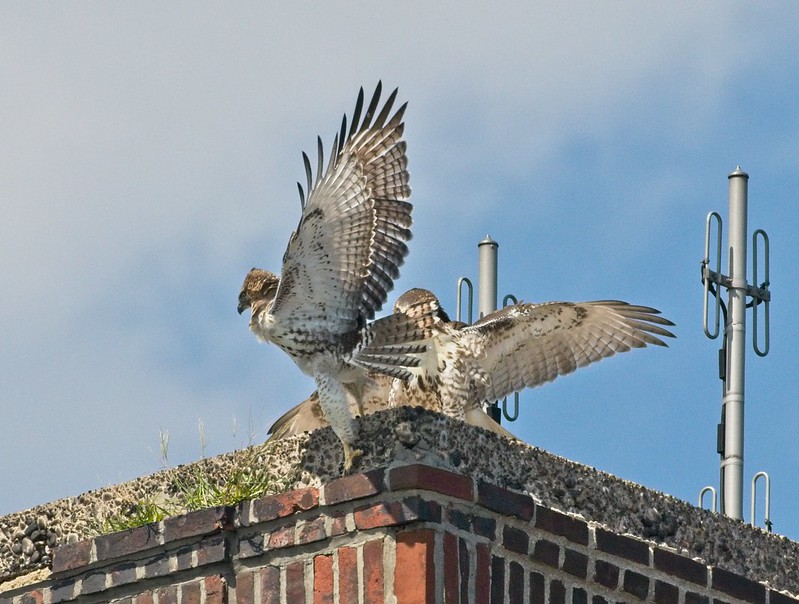 I love watching hawks at this age when they're playful and interact with each other. 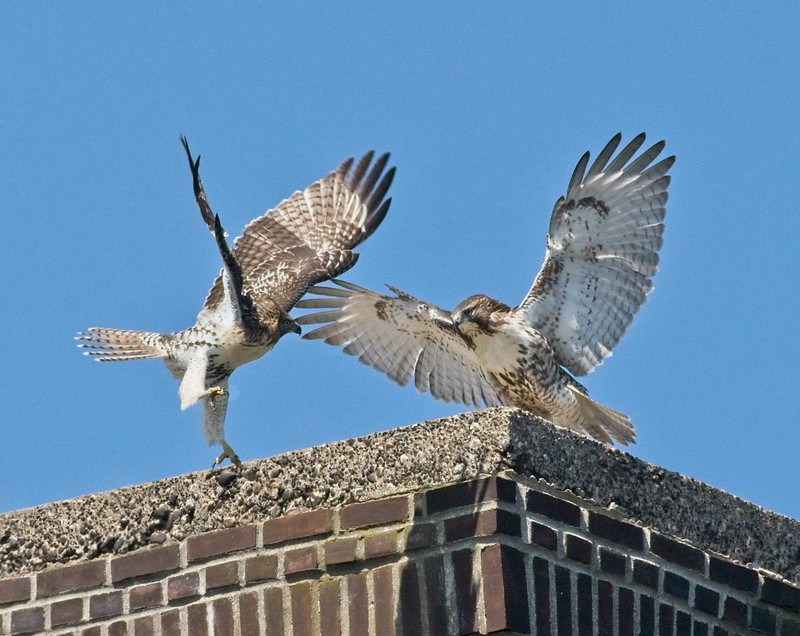 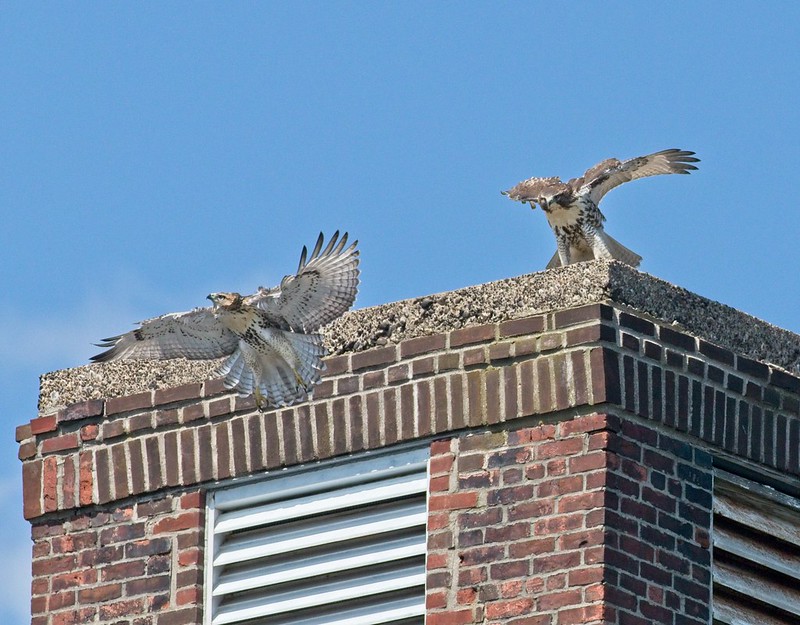 As the siblings played around on the roof, Dad continued to fly around with the crow until the crow decided to head somewhere else. It was replaced by a Barn Swallow who was really more interested in catching insects than paying any attention to the hawk. 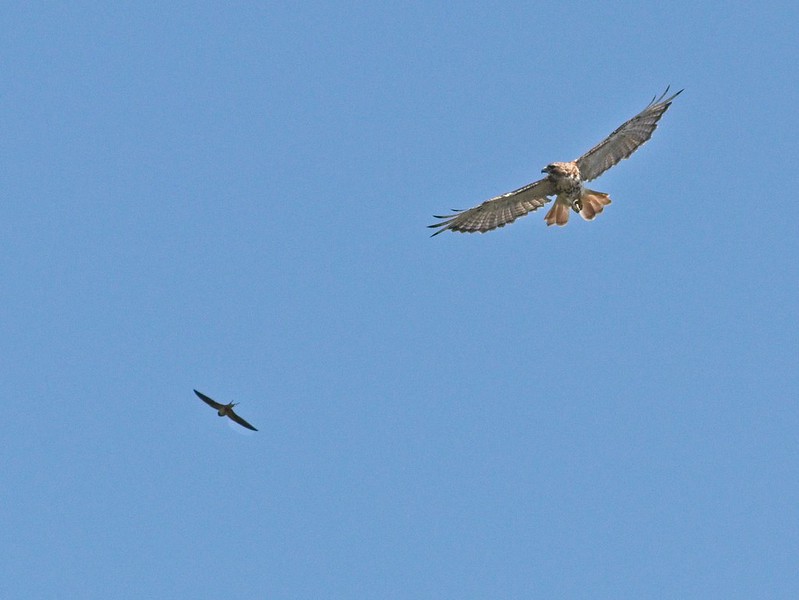 I did see the Mom hawk that day, but didn't get any good photos of her. She was nearby in some trees being harassed by another crow. Dealing with annoying neighbors is just something the hawks have to do.

At the end of my visit, one of the fledglings was back up on the weather vane and all seemed calm. 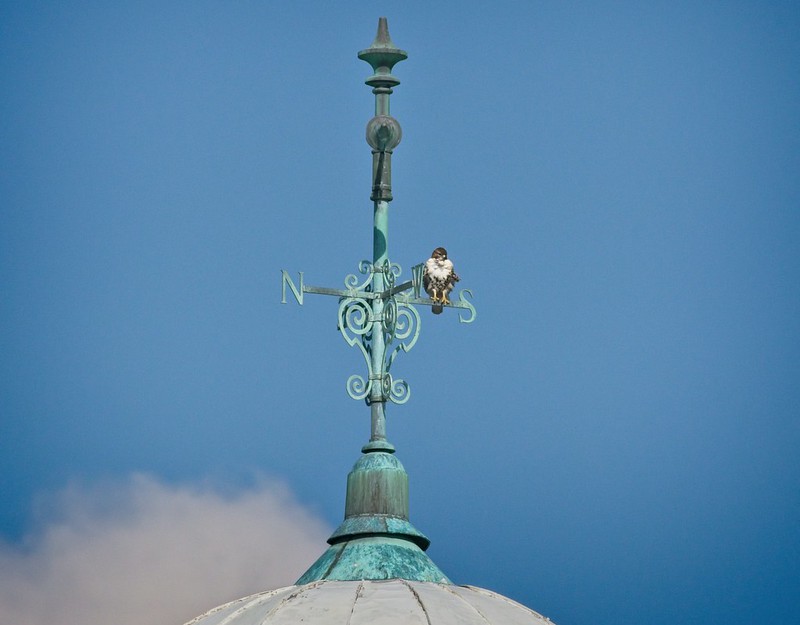 I have not seen either fledgling on any of my subsequent visits to the island, so I hope they are traveling companions on their first migration to parts unknown.

Posted by Laura Goggin Photography at 1:47 PM No comments: