Ending the 2020 season on Governors Island

November 1 marked the end of the 2020 season on Governors Island. This year was different because of the pandemic, so the island did not open to the public until July, and visitor access was more controlled.

This season saw the first nesting pair of red-tailed hawks on the island and I was disappointed to miss the entire nesting season when the island was closed in the spring. However, I was able to see the two fledglings later in the summer before they dispersed to parts unknown. The parents remain on the island, overseeing their territory, and I was able to catch up with them before the island closed for the winter.

Late in the afternoon, I was walking across the parade ground when I saw a creature lurking in the grass. 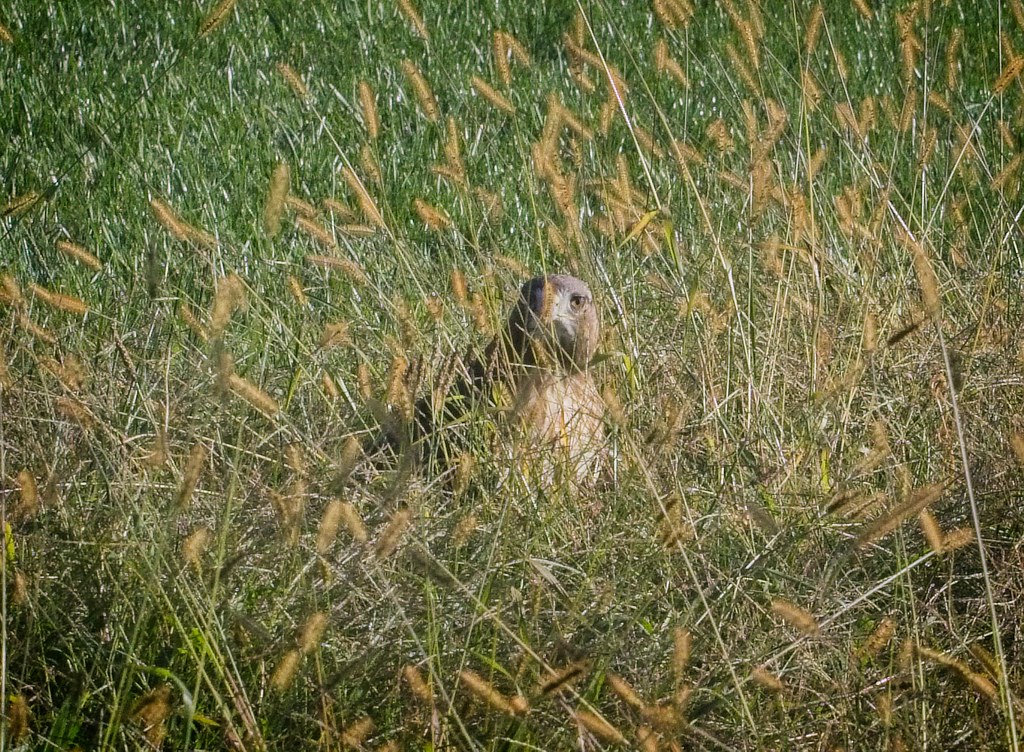 It turned out to be the resident male red-tail and, as I stood there, he was joined by the female. They appeared to be looking for something - there were several Northern Flickers and Eastern Meadowlarks in the grass, but the hawks didn't seem to be interested in them. I never did figure out what they were doing. 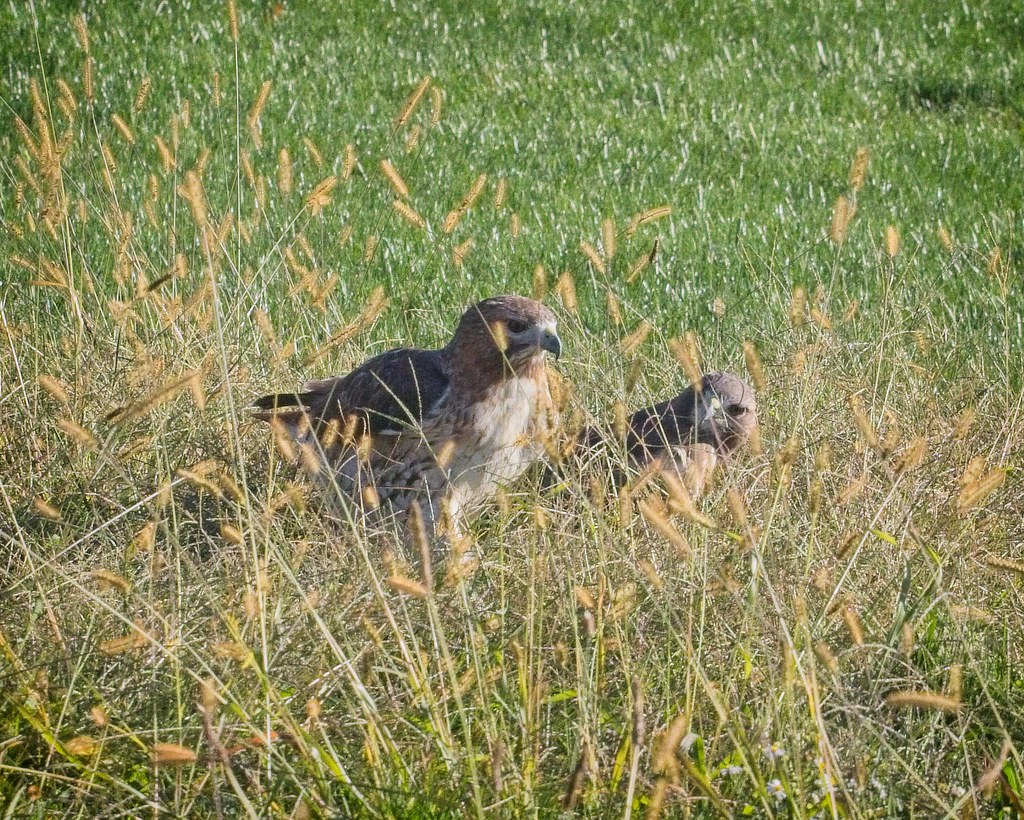 Apparently not finding what they were looking for, the hawks flew up to a soccer goal net and perched where they had a better view of the field.

The male is on the left and the female is on the right. You can see the differences in their size (she's larger) and their coloring (the male has a darker head and lighter eyes). 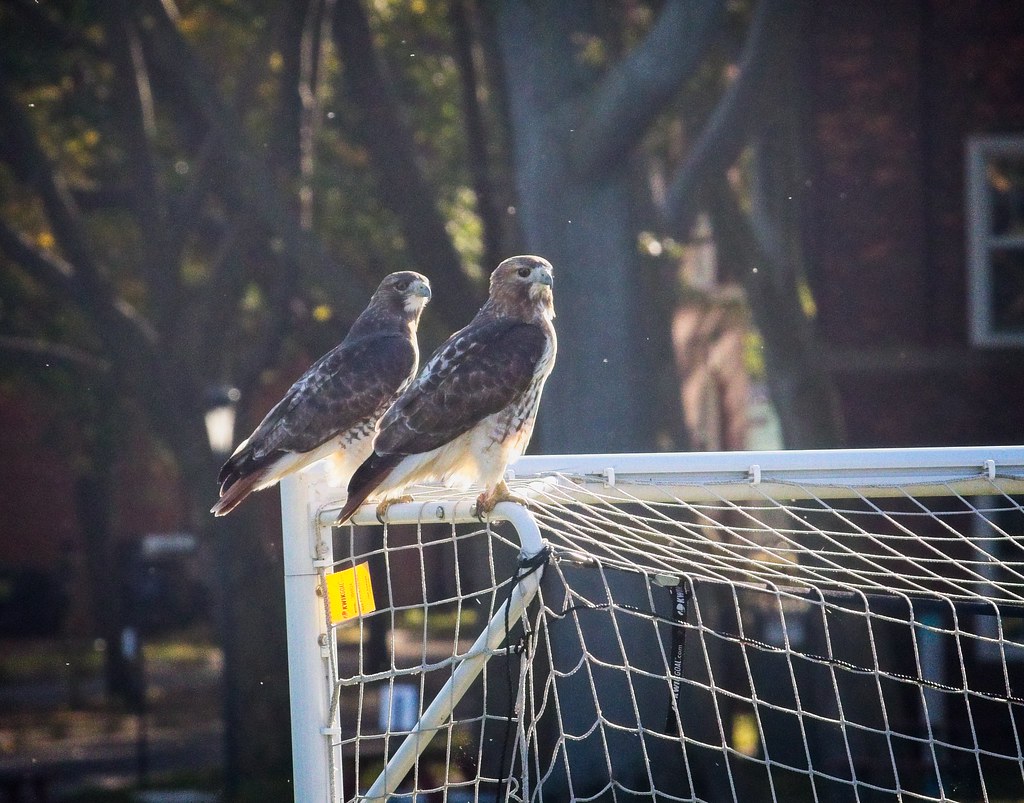 Here is a view from another angle with the female on the left. Both hawks looked different in August when they were going through their summer molts. The female now looks pretty much the same as she did last year, but I've noticed some slight differences in the male's appearance. He has more brown coloring on his chest and his eyes are darker (they will continue to get darker with age). You can see some close-ups of them in this post from a year ago. 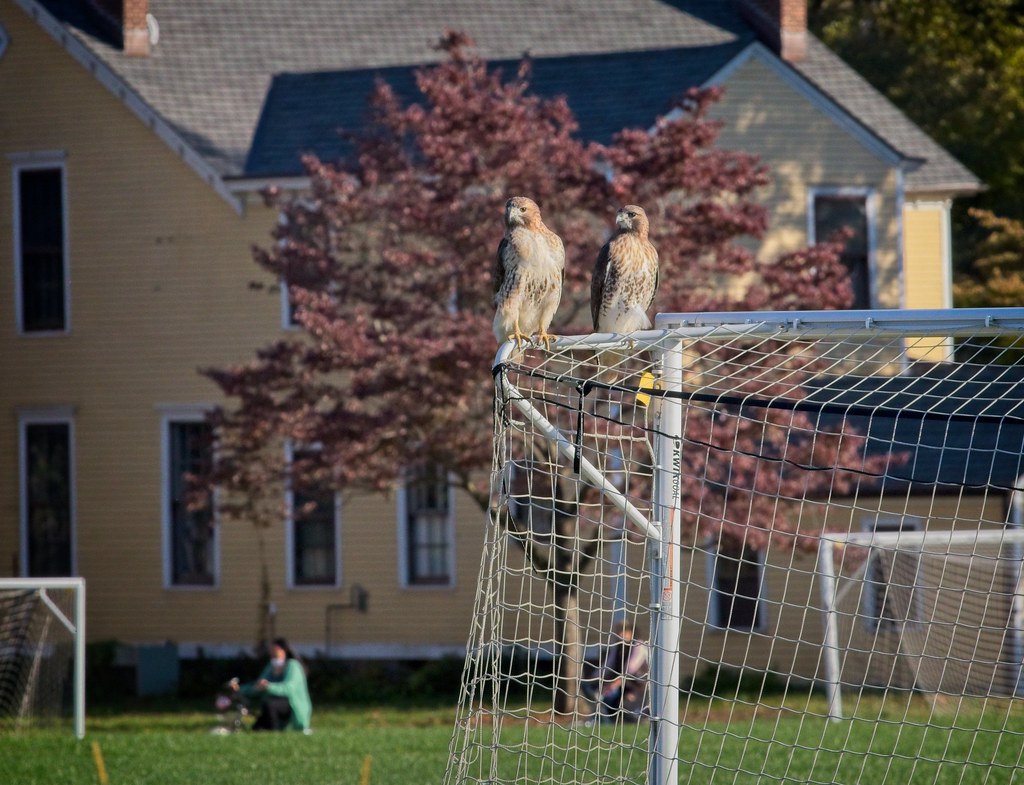 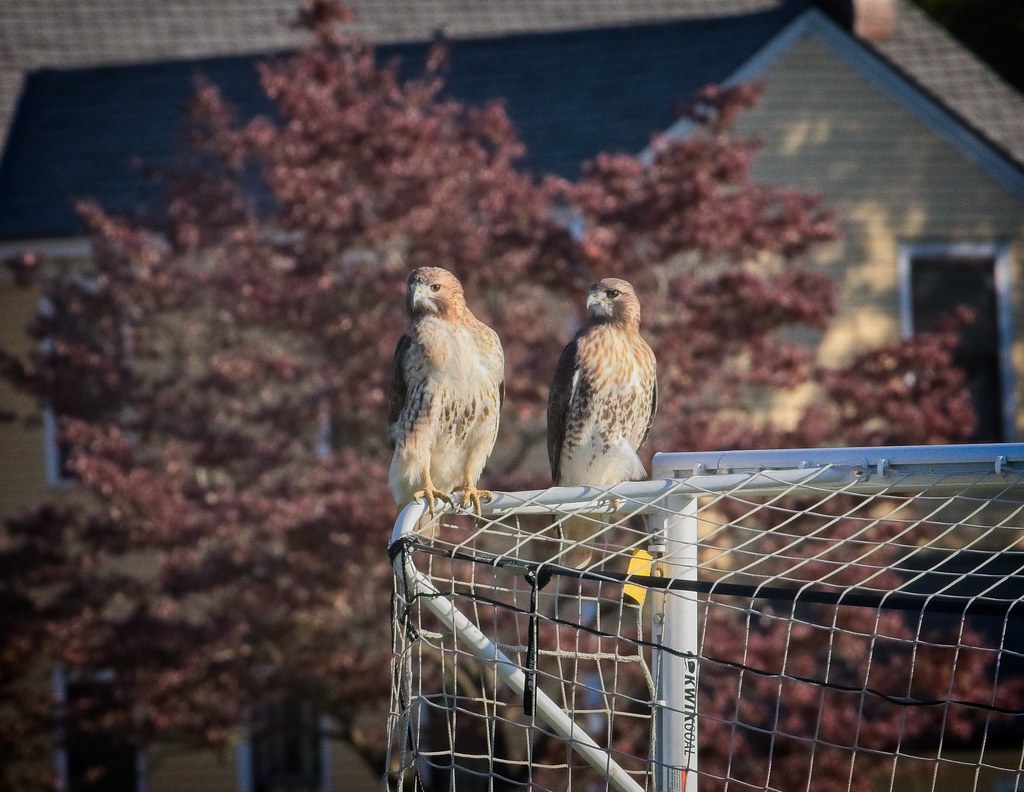 The male takes off. 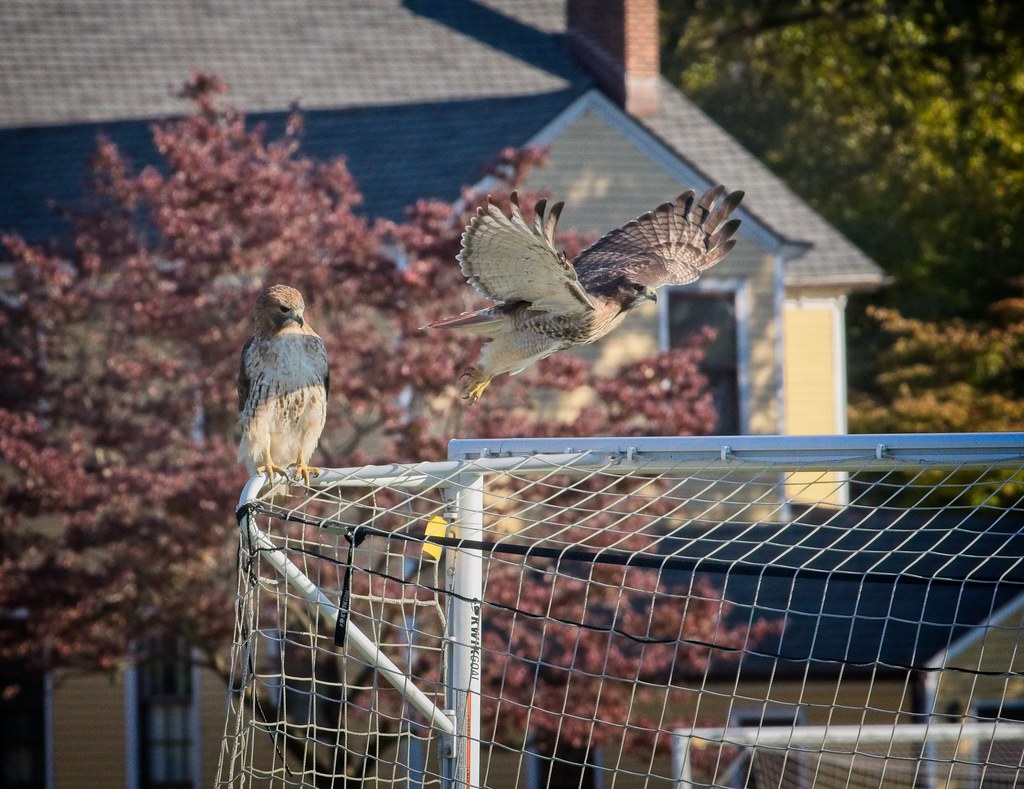 This was my last close encounter with the first lady of Governors Island. 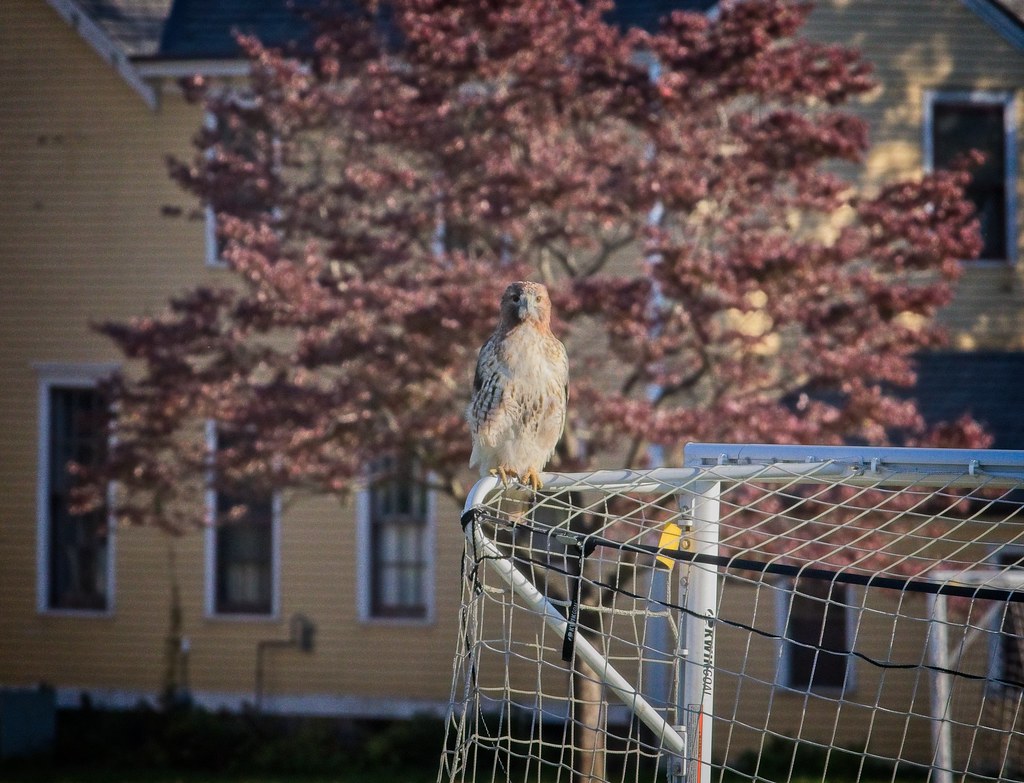 Meanwhile, fall is the time of year raptors are on the move, so those who haven't claimed territories of their own are migrating. Although there is now an established pair of red-tails on the island, other hawks have been observed there as well.

When I first spotted this red-tail, I was struck by its size and beauty. The hawk appeared quite large - bigger than the resident female - so I speculate this is a female as well. Her eyes and markings were just beautiful, and she appeared to pay me no mind as she spent a lot of time hunting around Fort Jay. I really enjoyed observing her, but a female American Kestrel had zero tolerance for her presence and relentlessly mobbed the hawk. 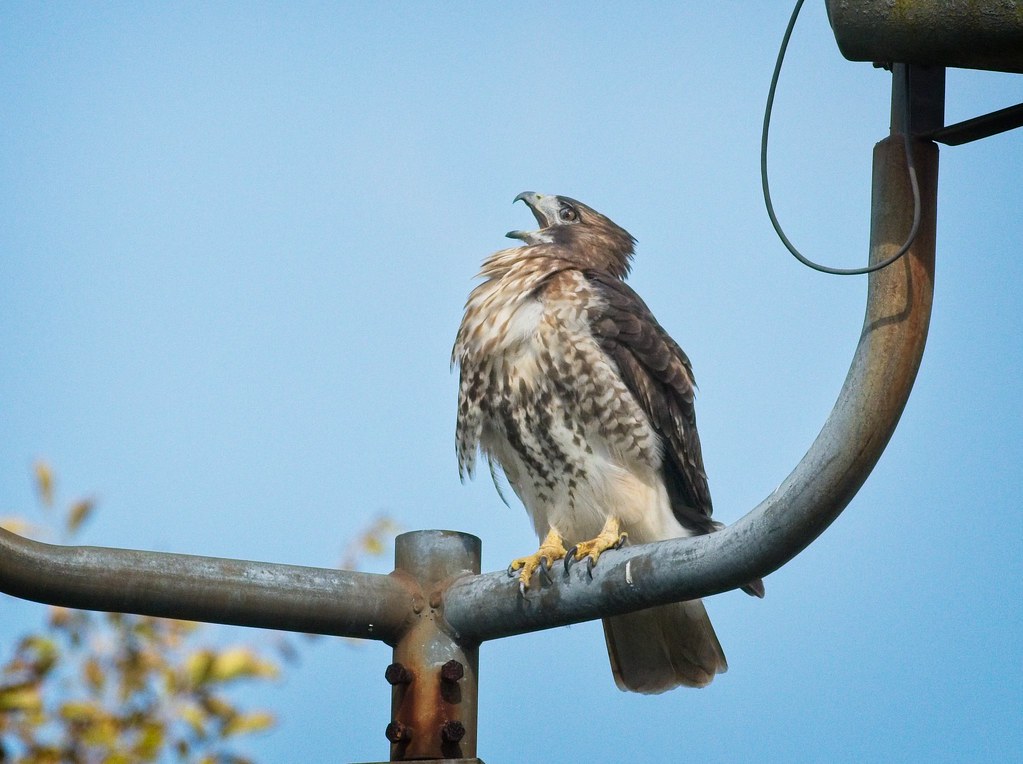 The pestering from the kestrel became too much, so the hawk took off. 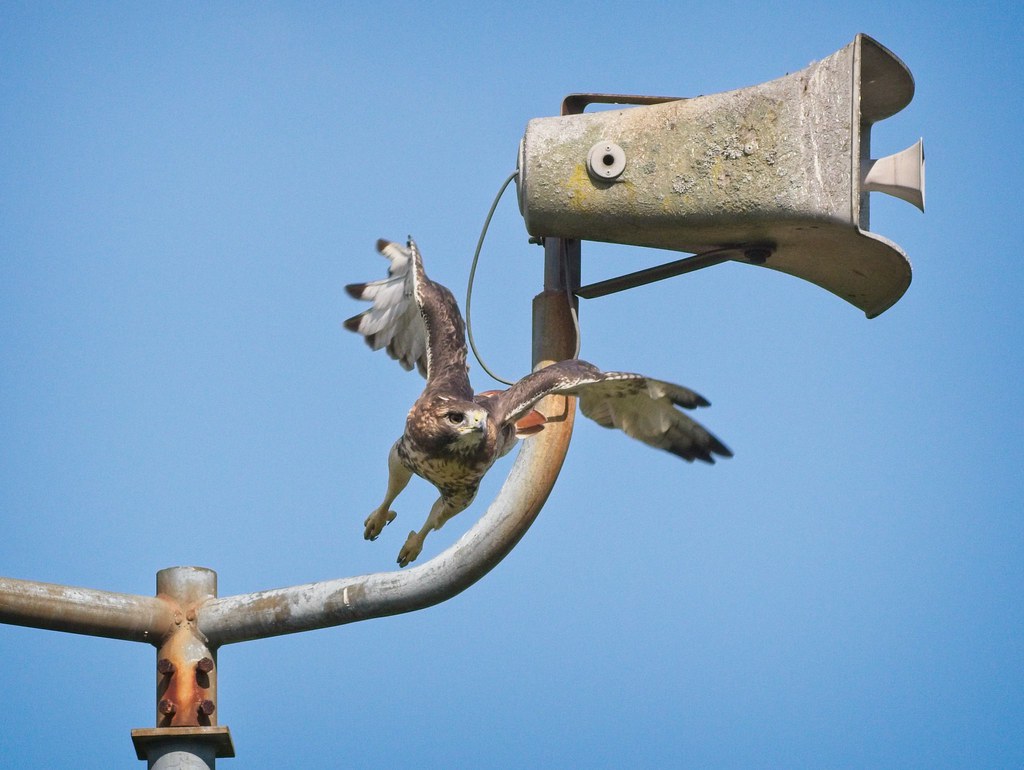 She allowed me a nice view of her as she flew past. 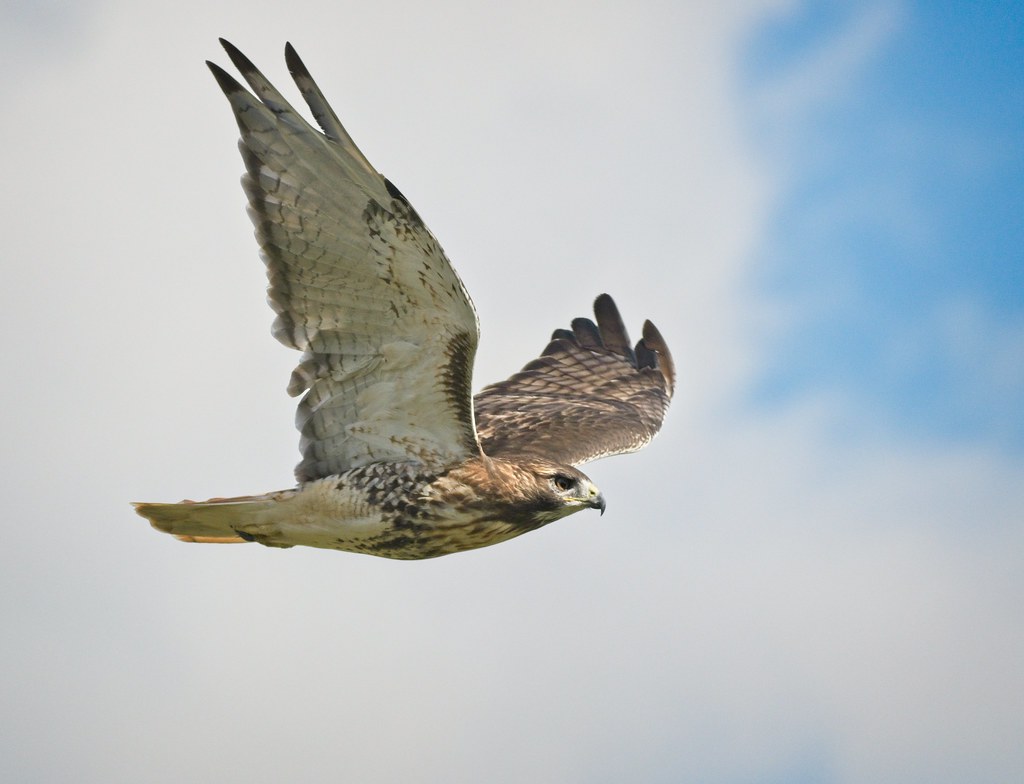 A little later, as the sun began to set, the visiting hawk reappeared at the fort, looking gorgeous in the fading light. 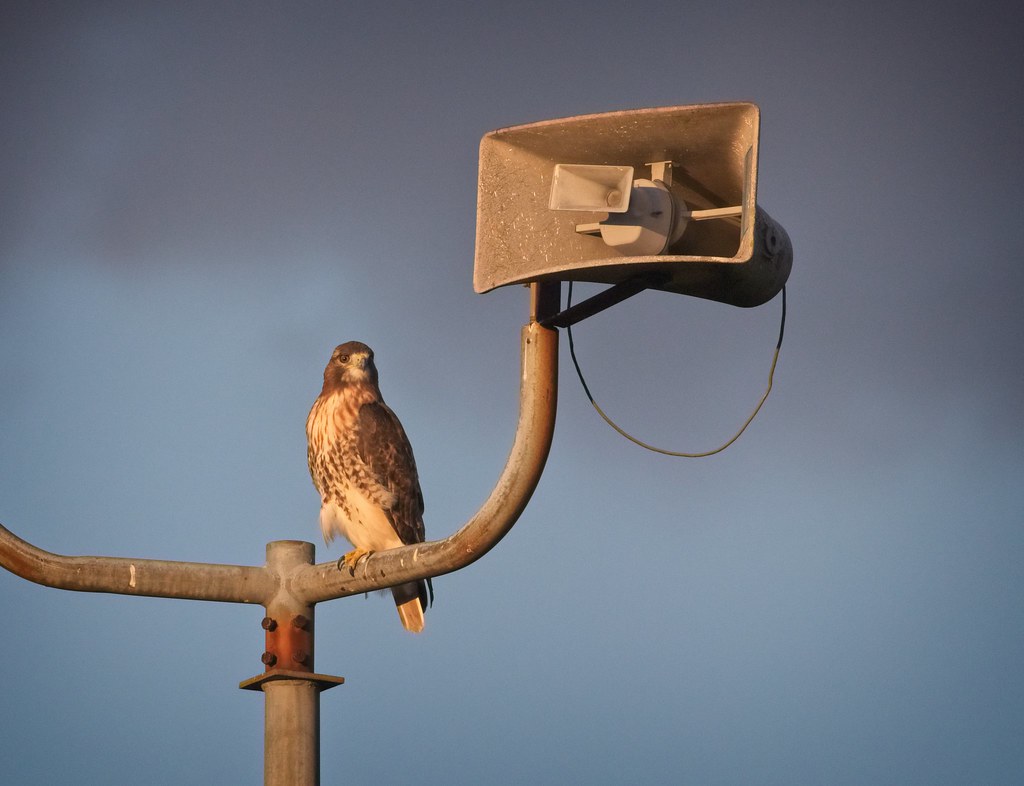 I didn't see this hawk again after this day, so I hope she's found a place to call home. 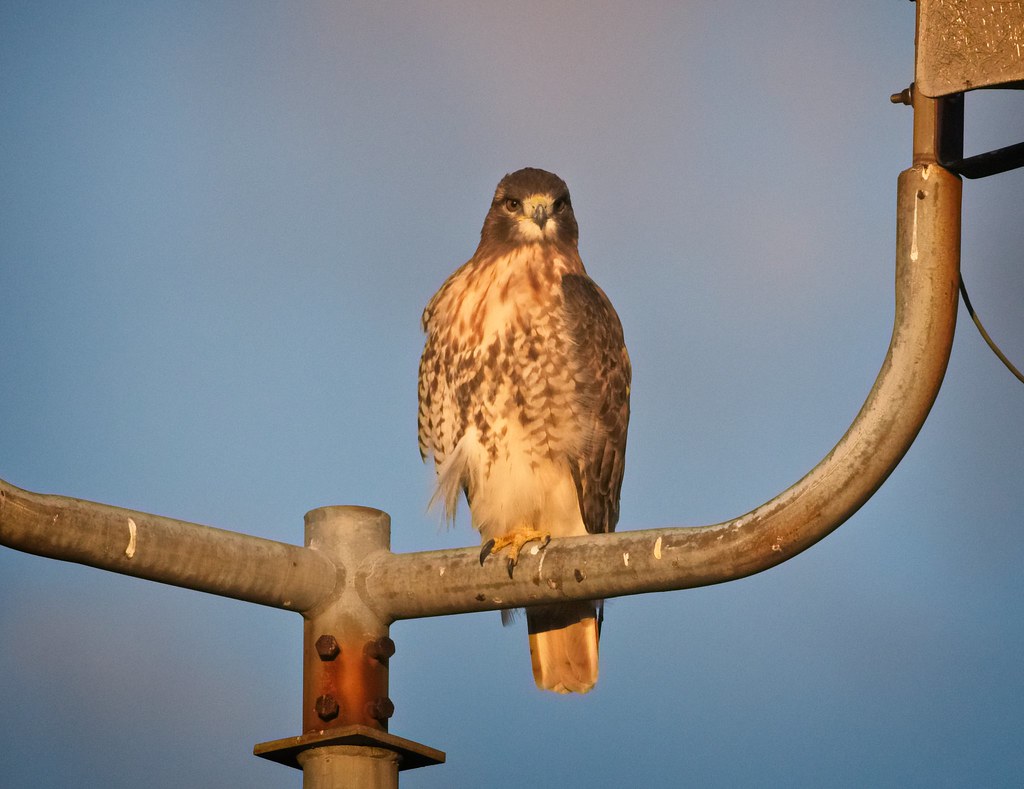 And that's a nice way to end the season on Governors Island. 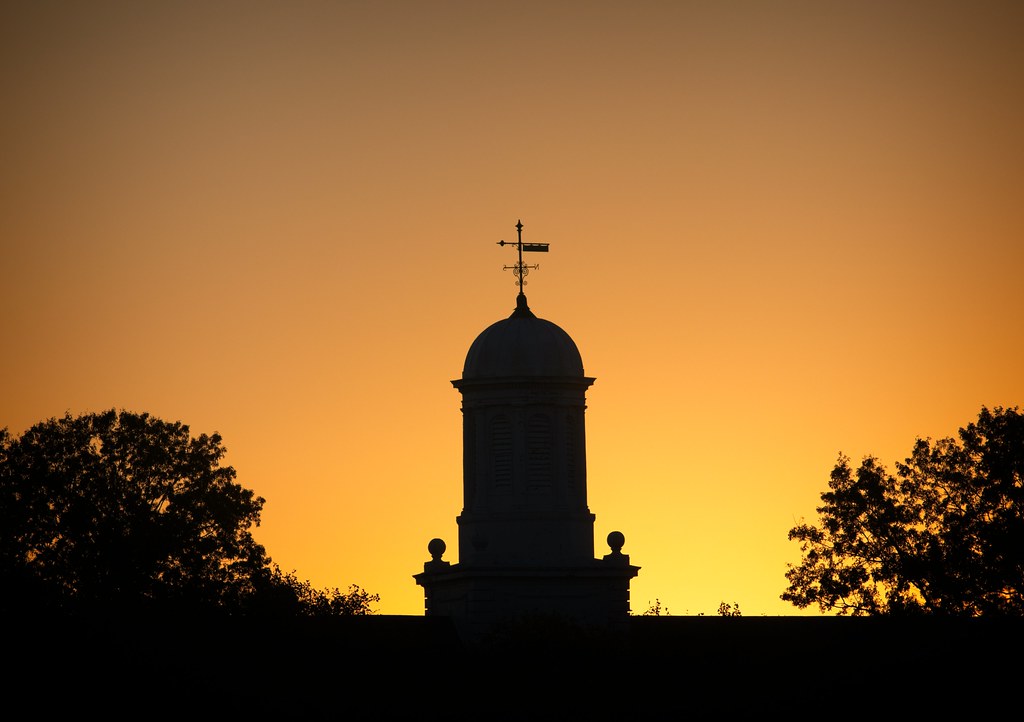 The island is due to reopen to the public on May 1, 2021. You can keep up with island news and updates on the Governors Island website.

Posted by Laura Goggin Photography at 2:36 PM No comments:

Halloween with Christo and the Voluptuous Horror of Karen Black

As October came to a close this last weekend, I was happy to meet up with red-tailed hawk, Christo, in Tompkins Square Park. I love this time of year when the fall foliage complements the warm highlights in his plumage. 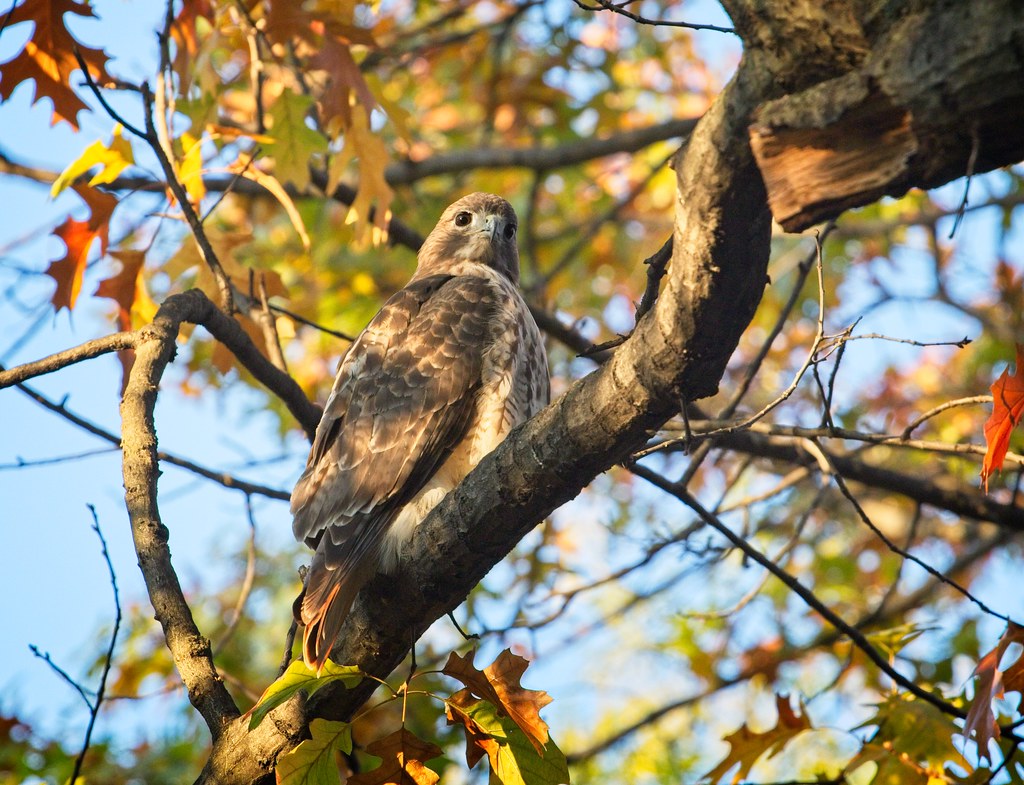 Christo has been a resident of the neighborhood for six years now, having arrived back in the fall of 2013. I'm estimating his age to be 8-9 years, making him a distinguished middle-aged hawk. 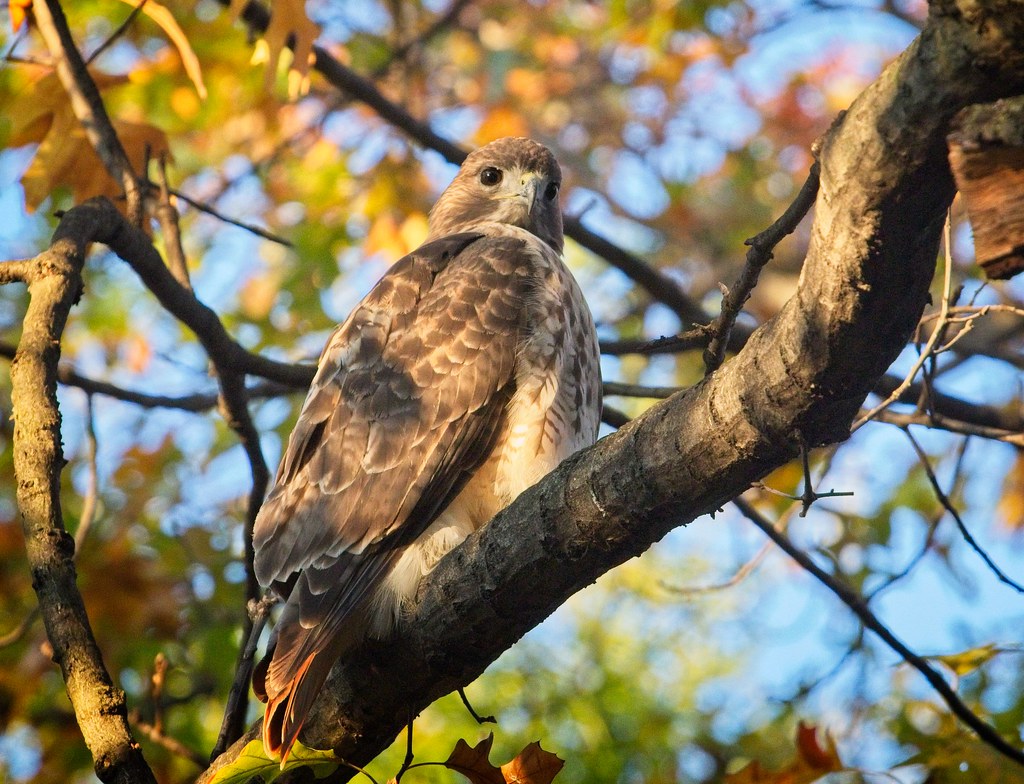 Christo is no longer the flamboyant young raptor who continuously zipped around the park like a firecracker, but is now much more frugal with his energy. He has spent the last several years honing his hunting skills, employing as little energy as possible. He knows where to find his favorite food - rats - and he knows how to expertly catch them. With so much food available in his territory, Christo has the luxury of being picky.

One of his hunting methods is to perch on top of the street lamps in the park at dusk and wait for the rats to come out. 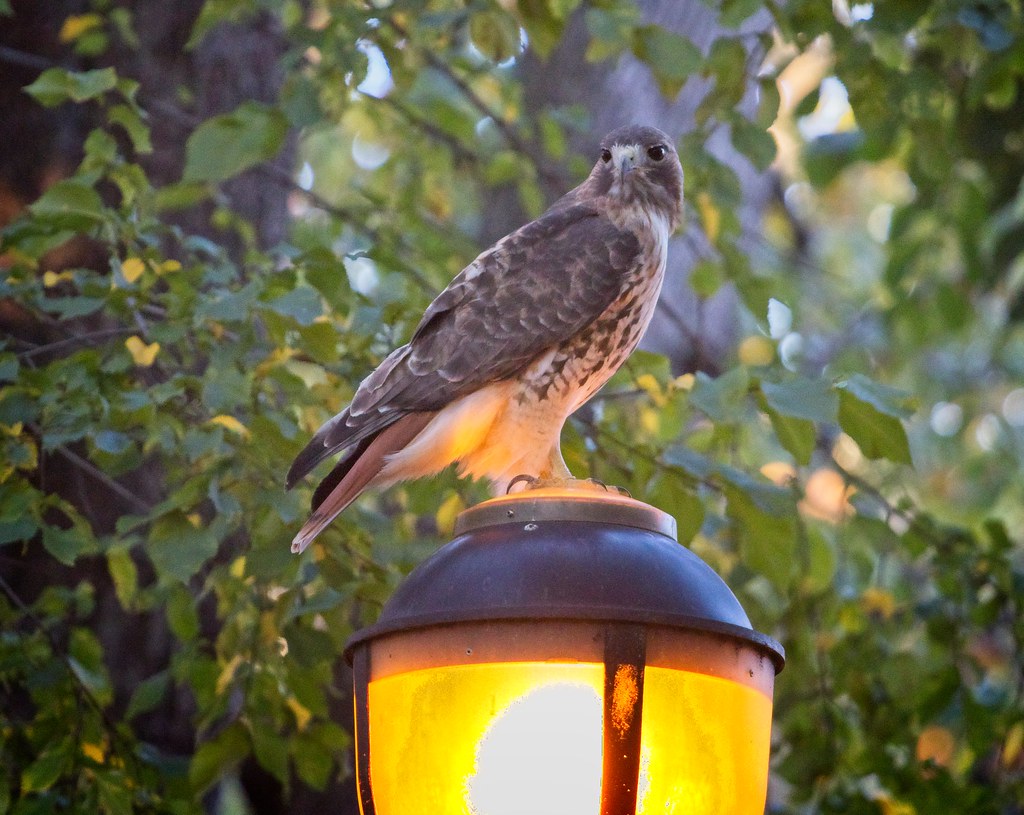 I watched him for about ten minutes as a parade of rats ran across the path between us. 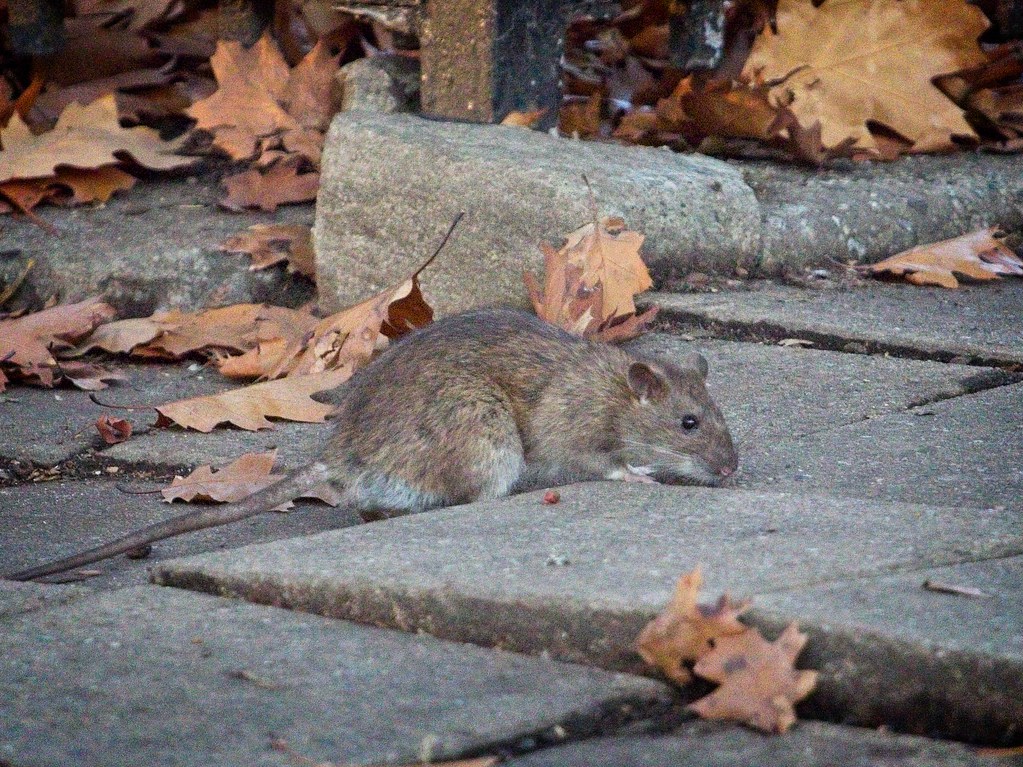 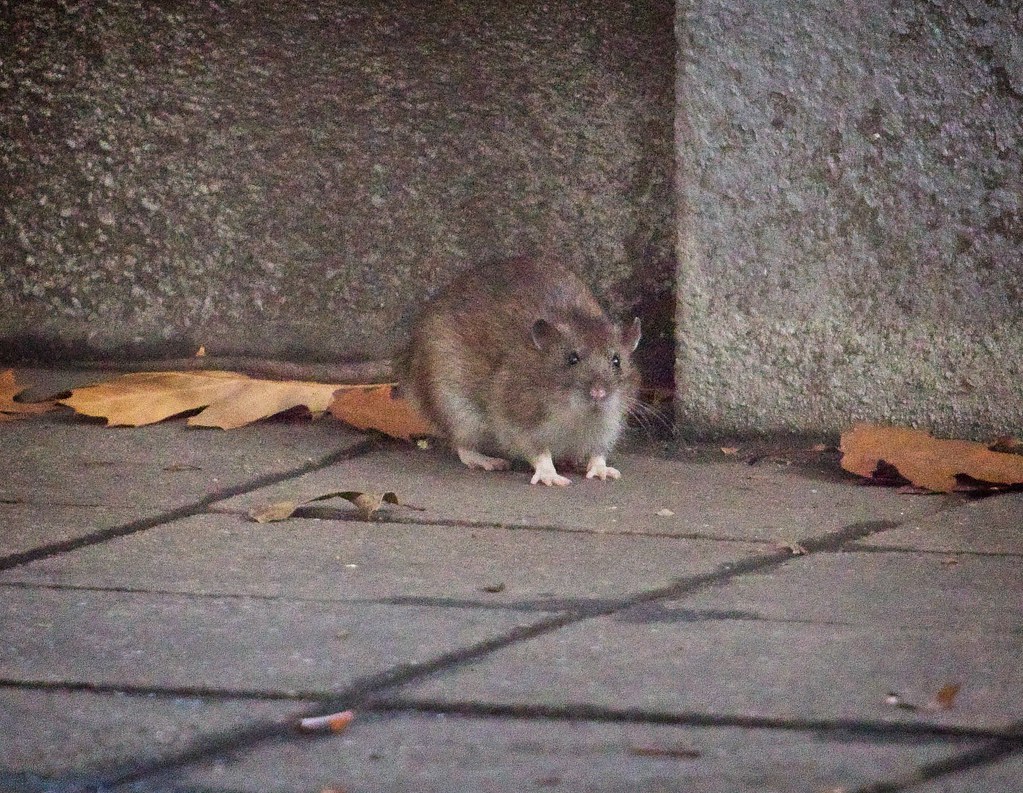 Christo let rat after rat run right past him, patiently waiting for just the right one to take his fancy. The longer he perched on the light, the more comfortable the rats became and let down their guard. When one practically walked right up to him, Christo dove down and nabbed it in half a second. It's a big one! 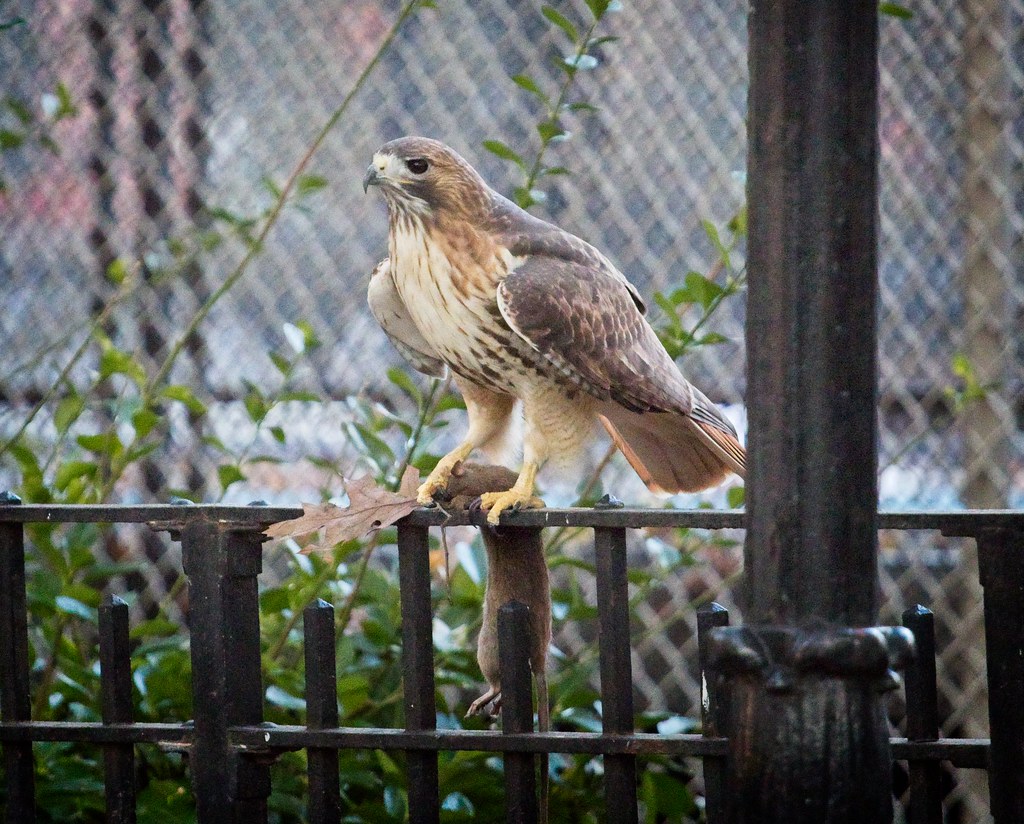 Satisfied knowing Christo had his dinner, I turned my attention to the other side of the park where the marvelous Voluptuous Horror of Karen Black, led by the extraordinary Kembra Pfahler, put on a special Halloween show. 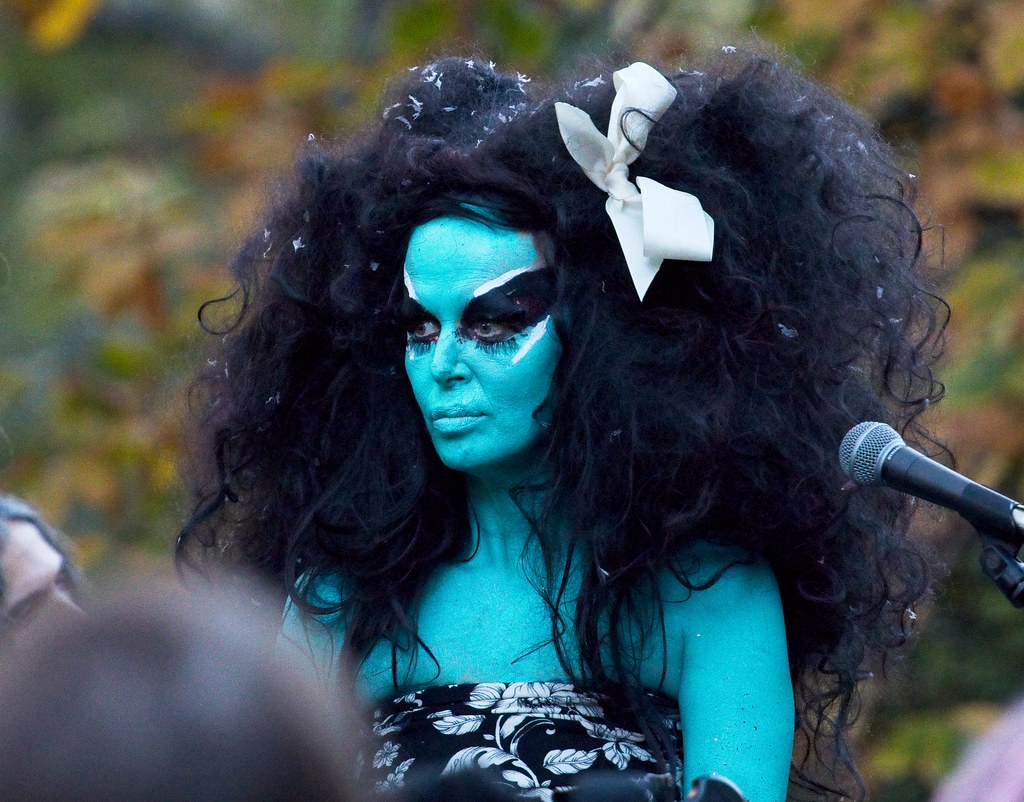 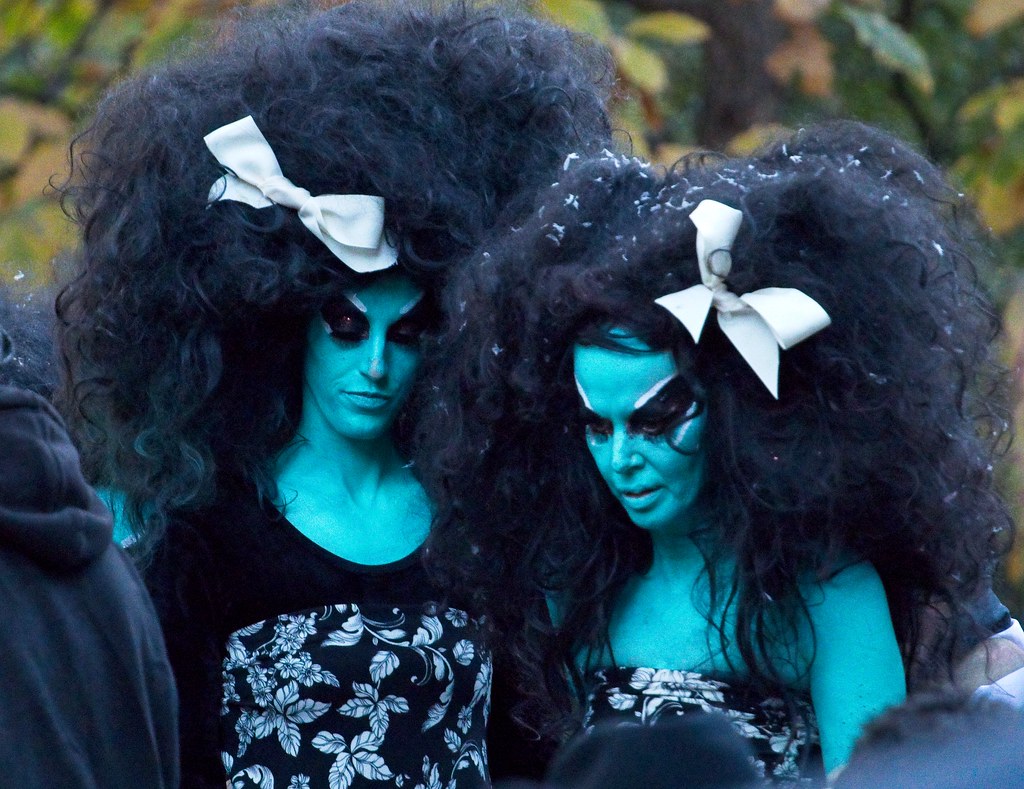 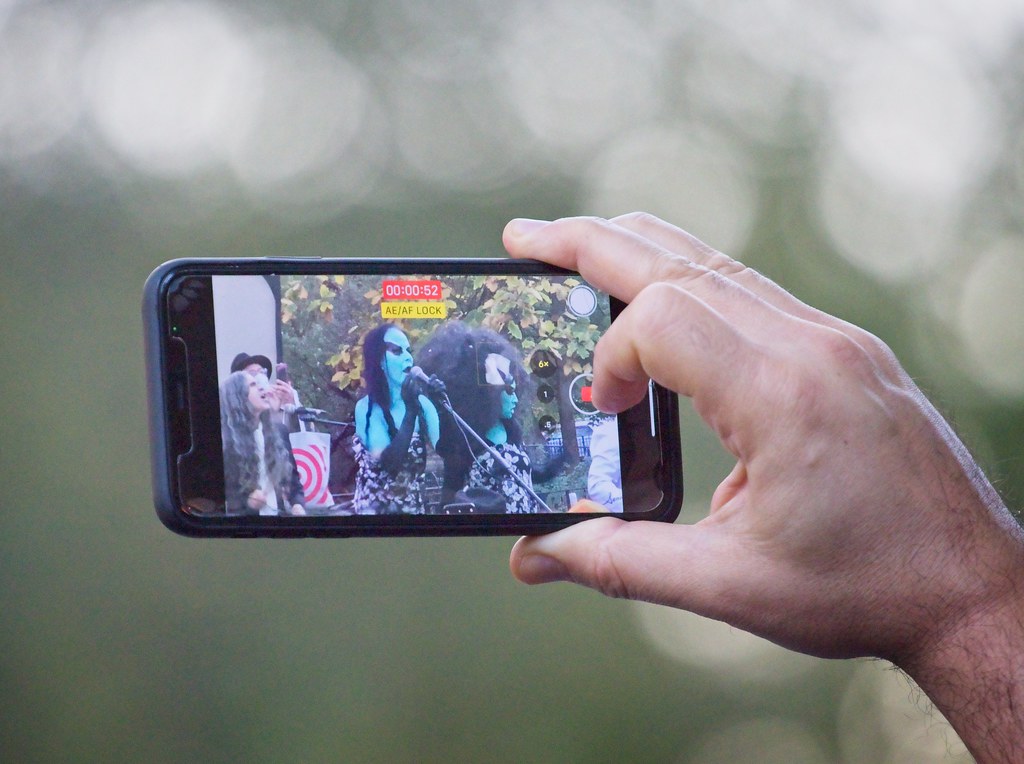 Christo's mate, Amelia, circled over the band as they performed this song (NSFW video), which was a fitting climax to a fantastic show. 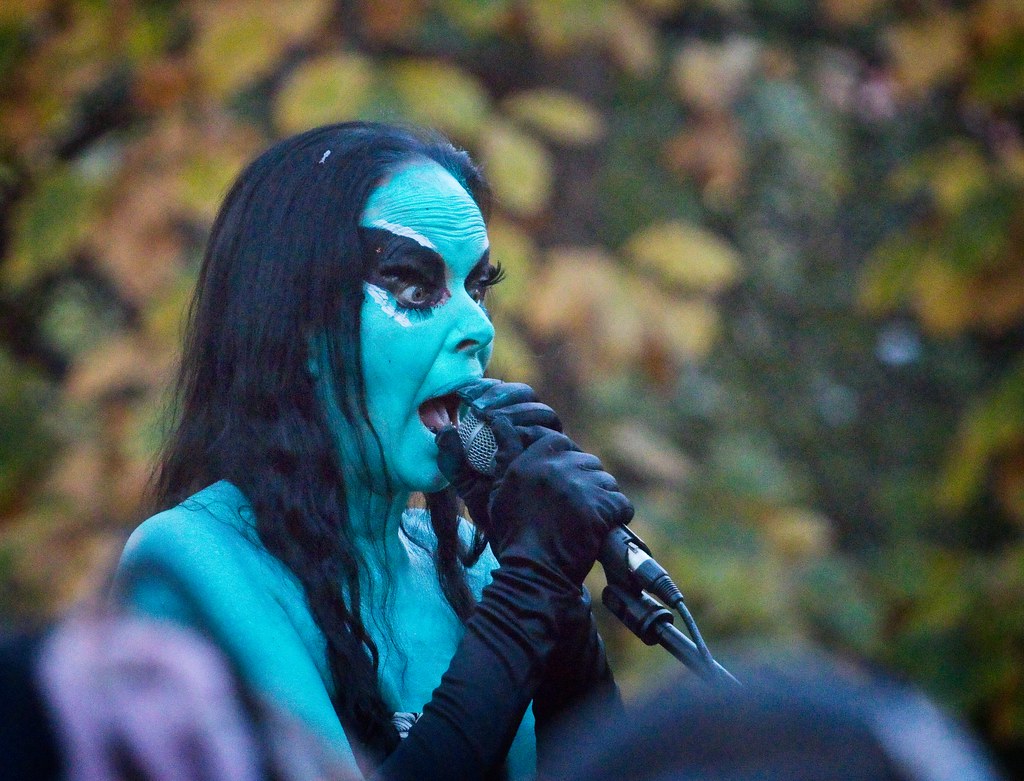 Since we've been enduring the pandemic the last several months, this show really felt like a triumph of our creative community and a celebration of strength, survival and resiliency. The hawks continue to do their thing, as are the people who share their habitat.

Bonus: Rats are as big a part of the city as people and hawks, so it was nice to see them being honored as well. 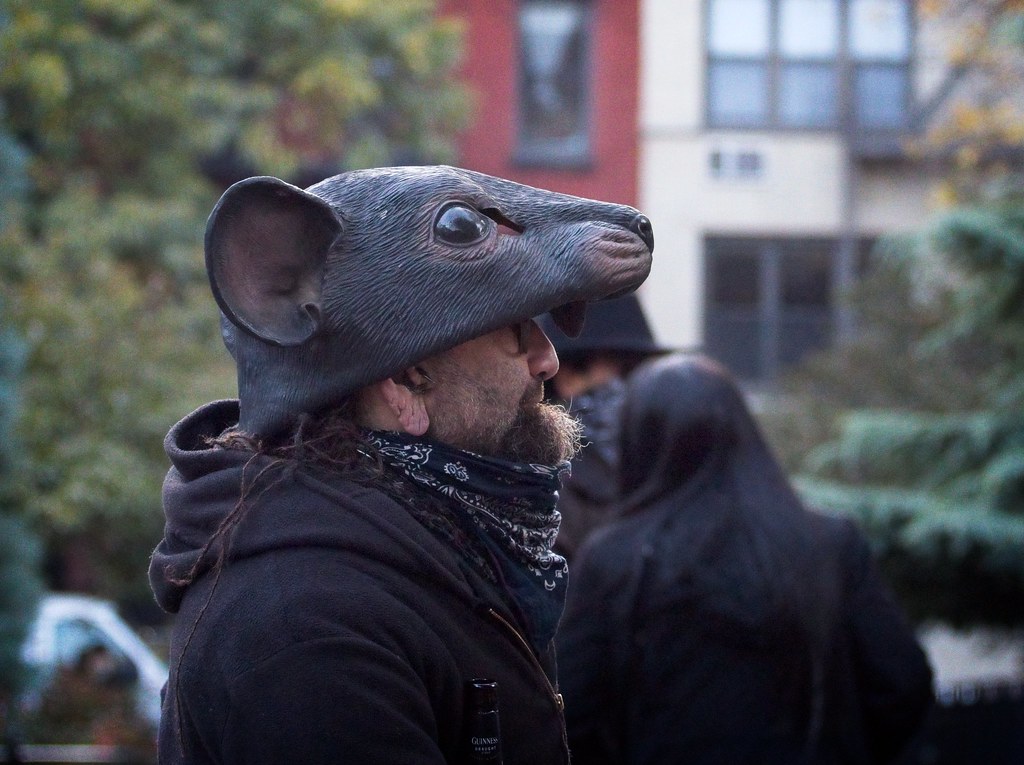 Posted by Laura Goggin Photography at 8:20 PM No comments: