There's been some post-Thanksgiving hawk action in the neighborhood, although much of it has been high overhead and I've been unable to catch it with the camera.  I've seen Christo and Dora chasing at least one other red-tail and a Cooper's hawk out of the area, but haven't been able to tell how many other hawks are around or what type they are.

Over the weekend, Christo was up to his usual afternoon hunting in Tompkins Square.  Here he is holding down something in the grass as a squirrel looks on from the trunk of a tree. 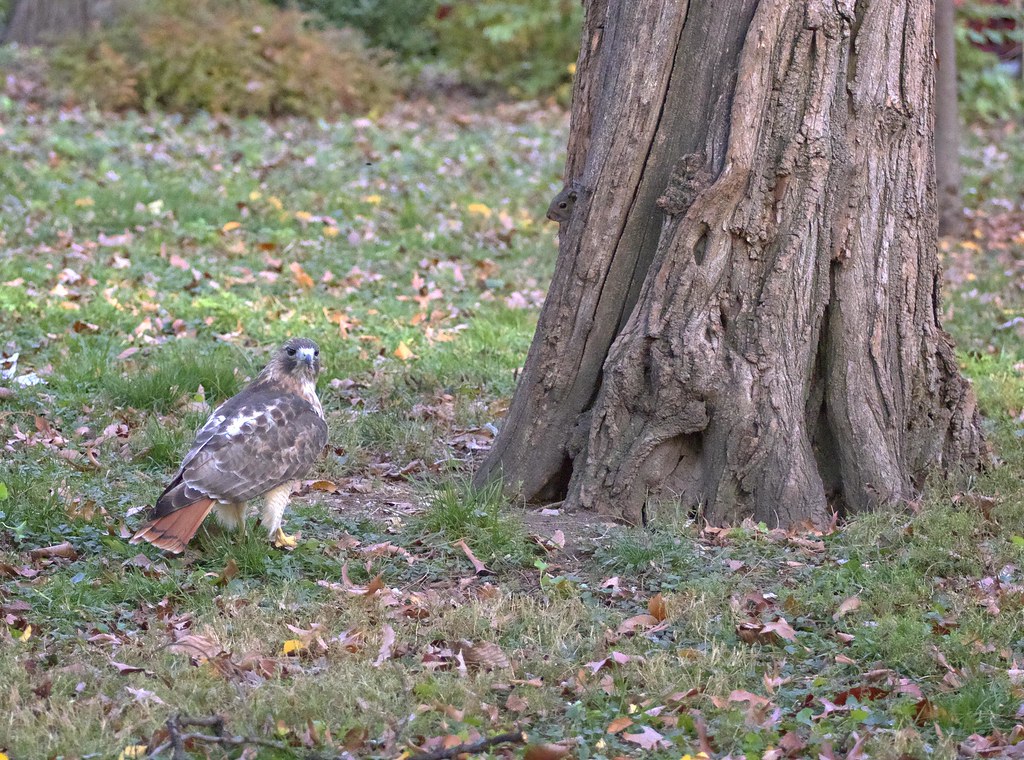 I thought Christo had pounced on something, but when he took off, it was revealed to be a rather, uh, ratty old rat. 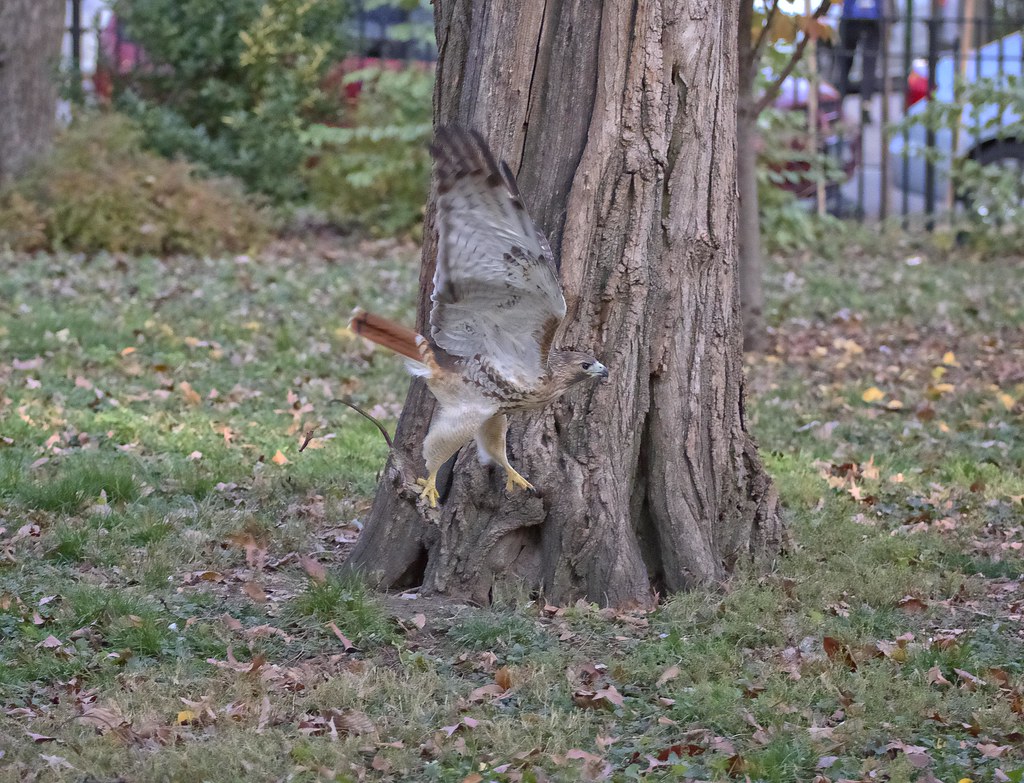 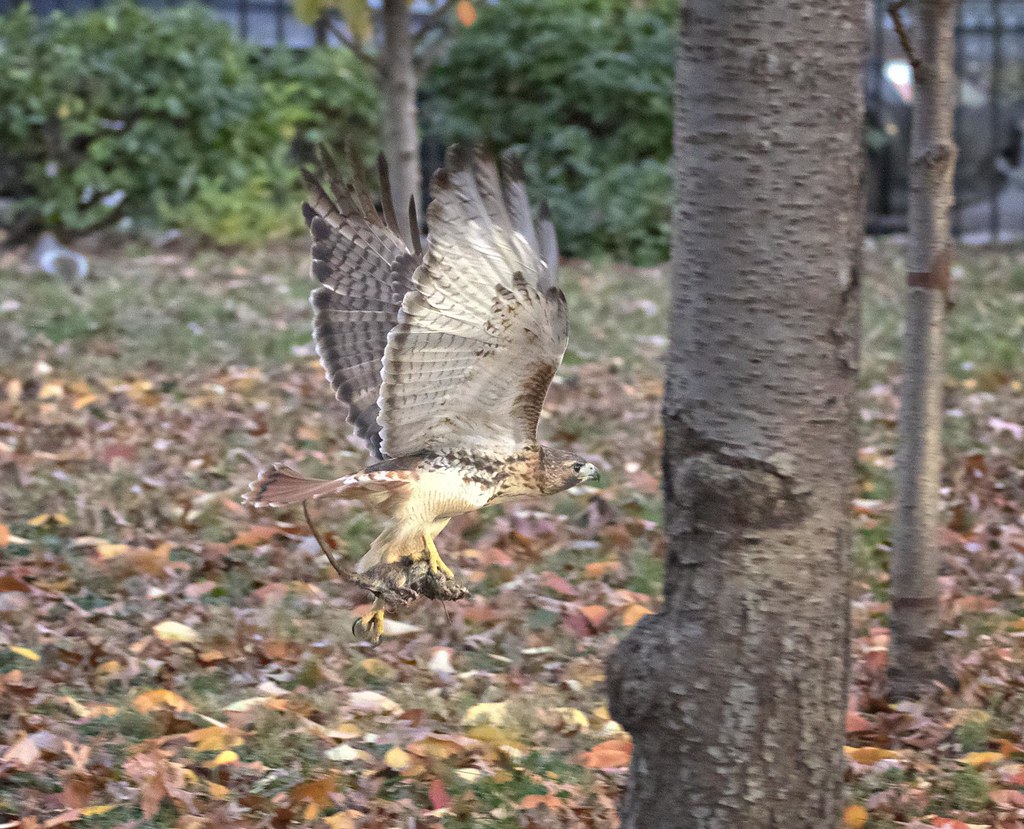 My first thought was concern, as it could be a dead poisoned rat.  It looked pretty mangled and could have been lying in the grass a long time, so it wasn't obvious how it died.  It's possible Christo left it there earlier, or it could have been discarded from another hawk.  I really have no idea, but feel more comfortable when I see him catch and eat his own food.

On Sunday, I spotted Christo and Dora circling high above the park with a Cooper's hawk.  I watched as they escorted it south and then west, leading it out of their territory.

So I was surprised to see this juvenile Cooper's hawk land in a tree near the hawk nest just a few minutes later. 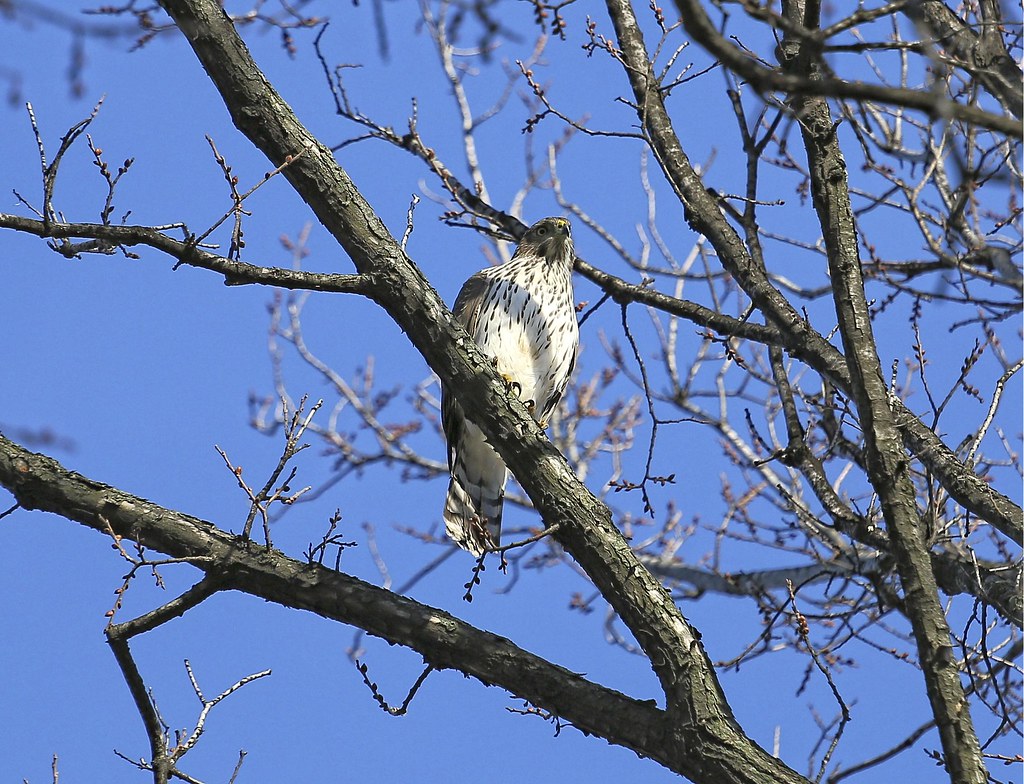 I don't know if this is the same Cooper's that had been circling overhead just minutes before, but I suspect it's a second hawk.  I found it strange that it was able to sneak in under Christo and Dora's radar.  The young hawk perched in the tree for just a couple of minutes before flying over to Avenue A where it stirred up pigeons, then disappeared.

On Monday, Christo and Dora chased a third unidentified hawk right through the middle of the park, across the central lawn.  They screamed and flew about a foot off the ground before flying up and over 7th Street.  Despite many people being on the grass, no one seemed to notice or care.  I tried to follow the birds, but wasn't quick enough and lost sight of them as they sailed SW towards First Avenue.

Later that same day, after having my eyes dilated at the eye doctor, I returned to the park to see if I could catch any hawk activity before the sun went down.  As it was almost dark and I was nearly completely blind, I gave up and headed home.

I really couldn't see, and was just thinking how dumb I was to be wandering the streets in that state, when a hawk flew right over my head on 6th Street.  Afraid I'd lose sight of it immediately, I chased after it and lucked out as I saw it land on top of a building on 6th Street, just east of Avenue A.  It was pretty dark at this point, but I was able to see the hawk as it hopped down to a fire escape. 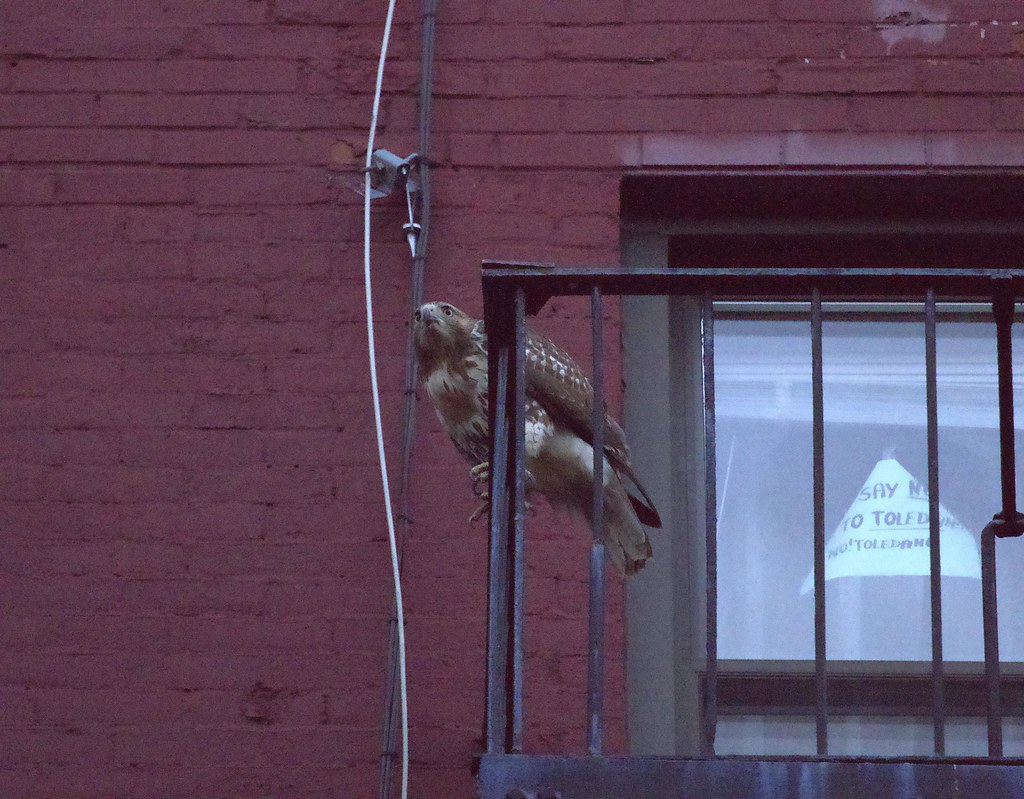 I first thought the hawk was Christo, as he's been known to roost right over the streets in that immediate area.  Then I thought maybe I'd finally seen the mysterious Dora go to her secret night place.  The hawk looked pretty big.

But as it took off, I could easily see it was a juvenile red-tail.  I've lightened up these photos quite a bit, so you can see the light colored eyes and brown striped tail.  In the dark, these features were hard to see, but there's no mistaking those speckled legs. 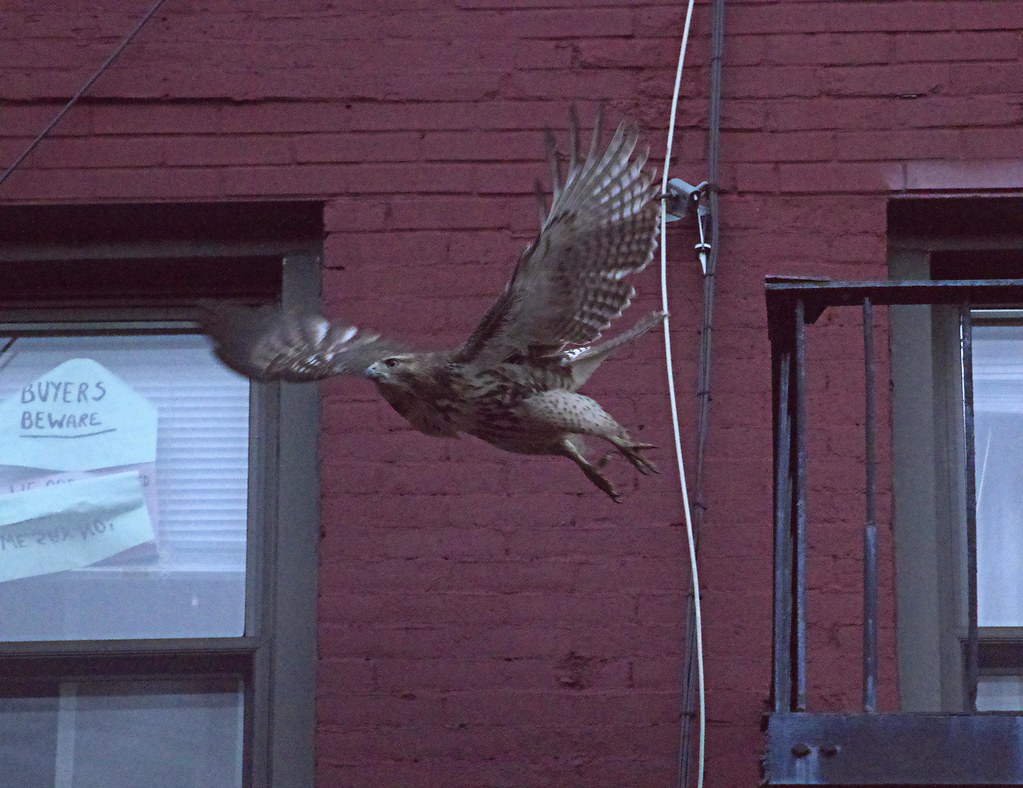 Christo has brown horizontal stripes on his legs while Dora's have no pattern.  The juveniles wear polka dots. 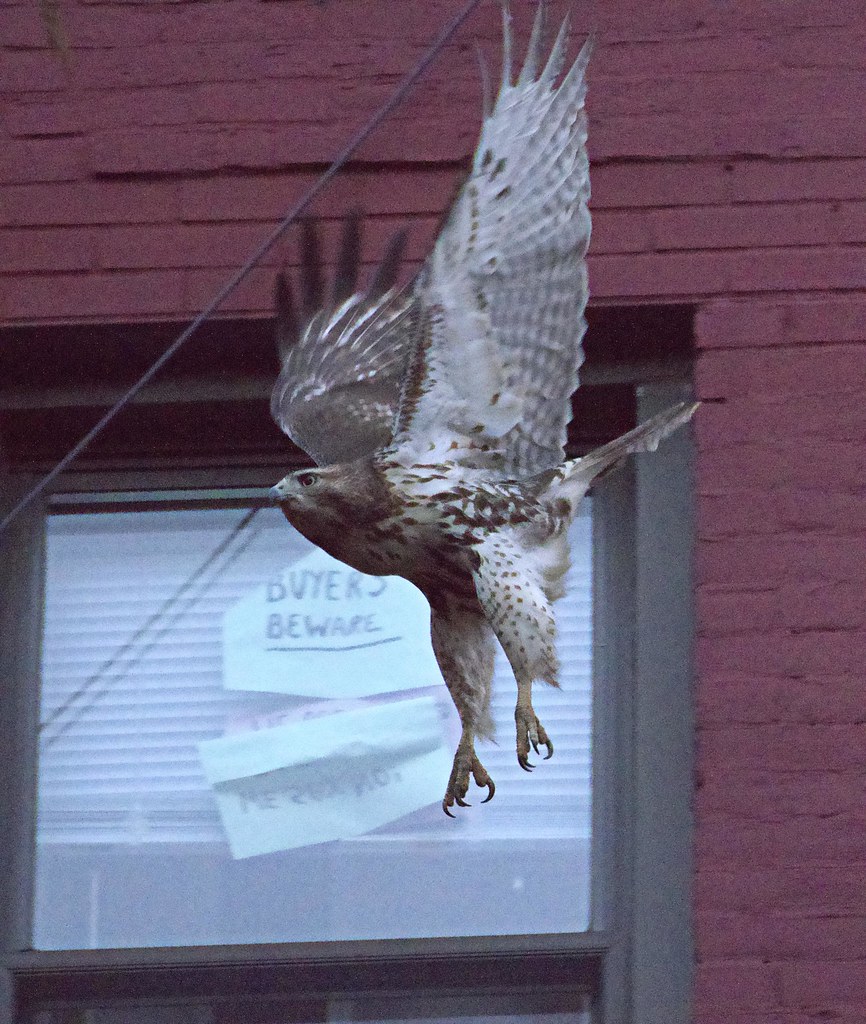 The Buyers Beware and Say No To Toledano signs in the windows refer to Raphael Toldano, who recently bought several buildings in the area.

The young hawk settled in a tree outside 514 E 6th Street for the night. 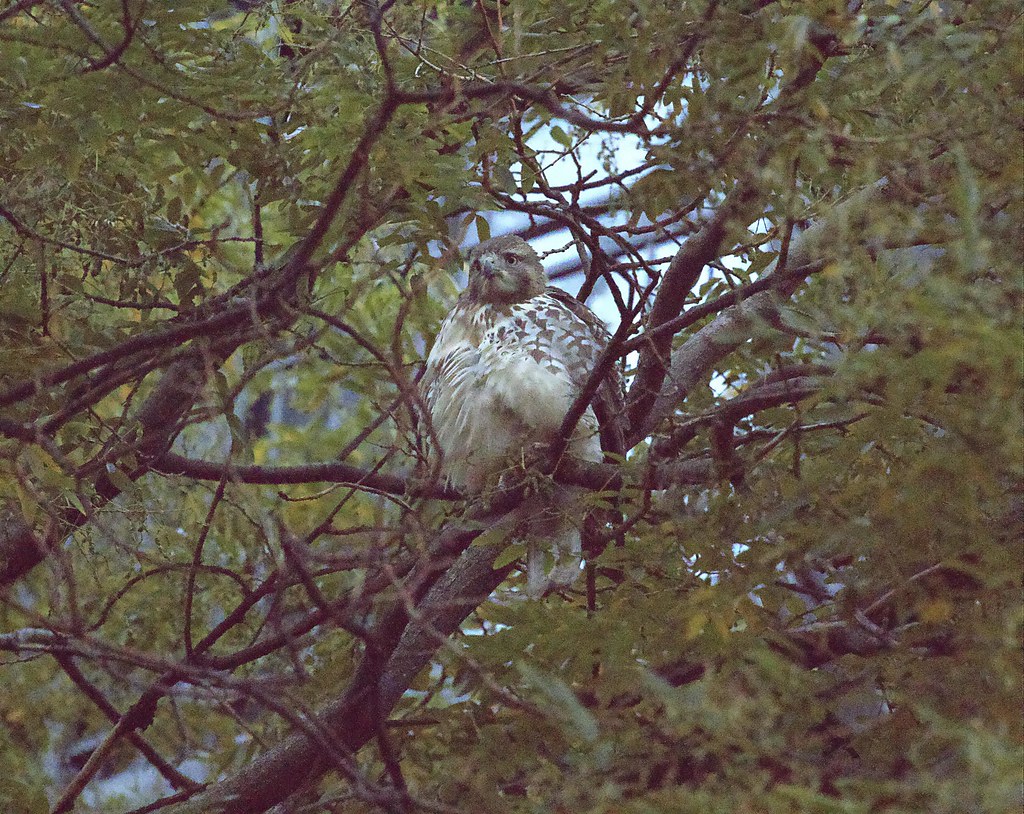 Meanwhile, Christo and Dora remain vigilant, keeping an eye on things from their watch tower on 3rd Street. 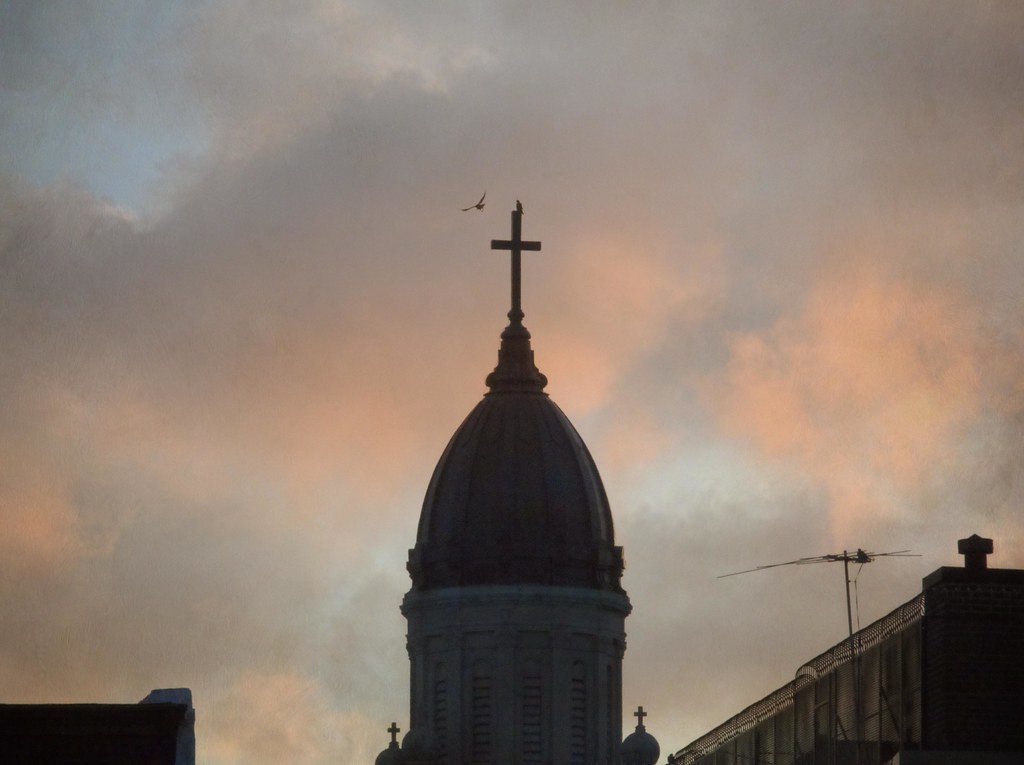