There's been a lot of drama surrounding the hawk nest on the Christodora building over the last few days.  Last Friday, some fellow hawk-watchers saw that the nest had been removed and bird spikes installed.  You can see images of the spikes over at Urban Hawks.

On Saturday, the hawks were going about their usual business of gathering sticks. On Sunday, I spent about two hours watching them completely rebuild the nest.

This was the state of things on Sunday, with Christo on the left and Dora on the right. 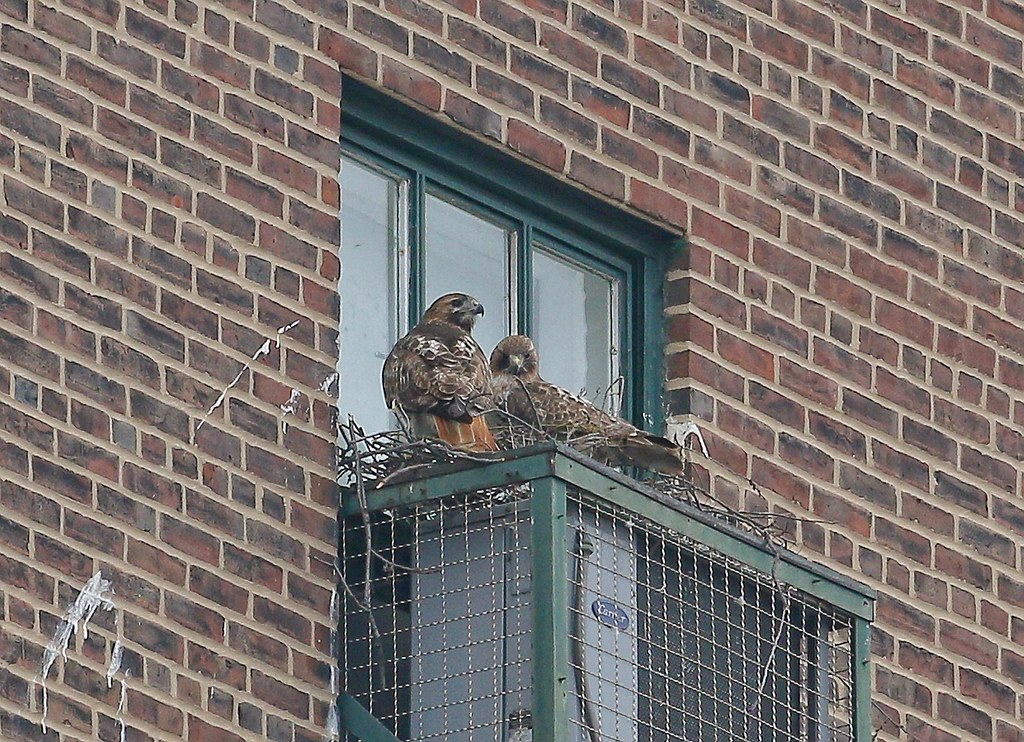 Christo cutting sticks from a tree... 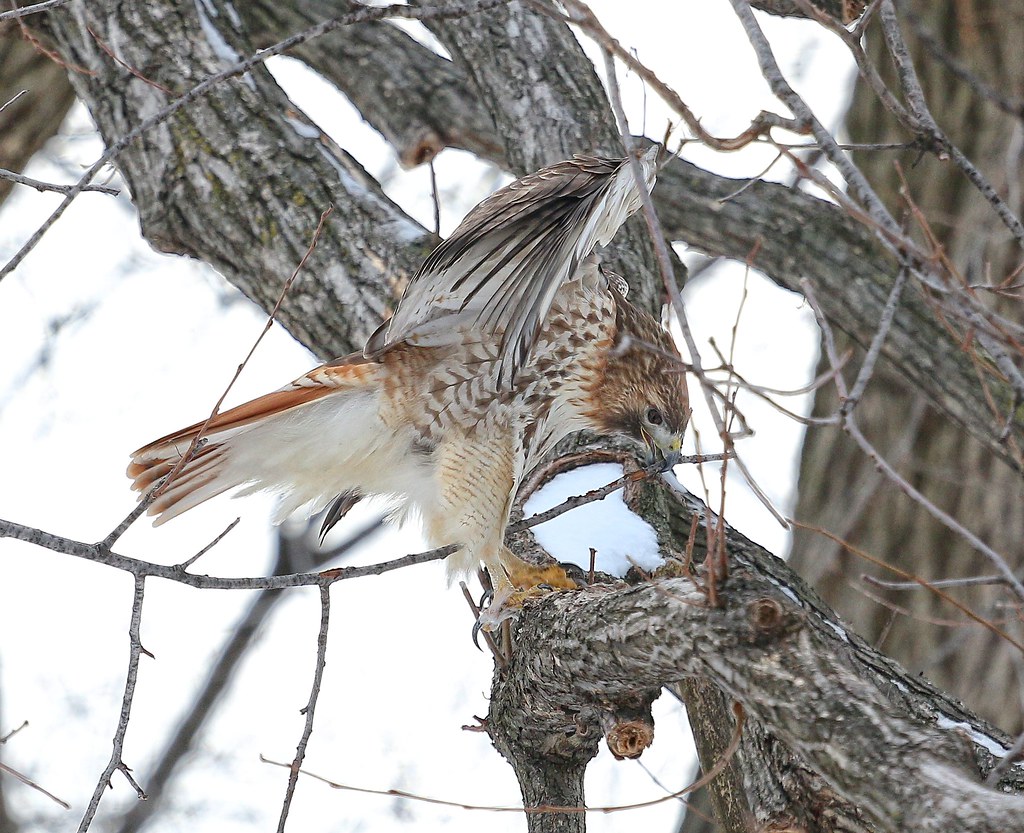 ...and carrying a stick to the nest. 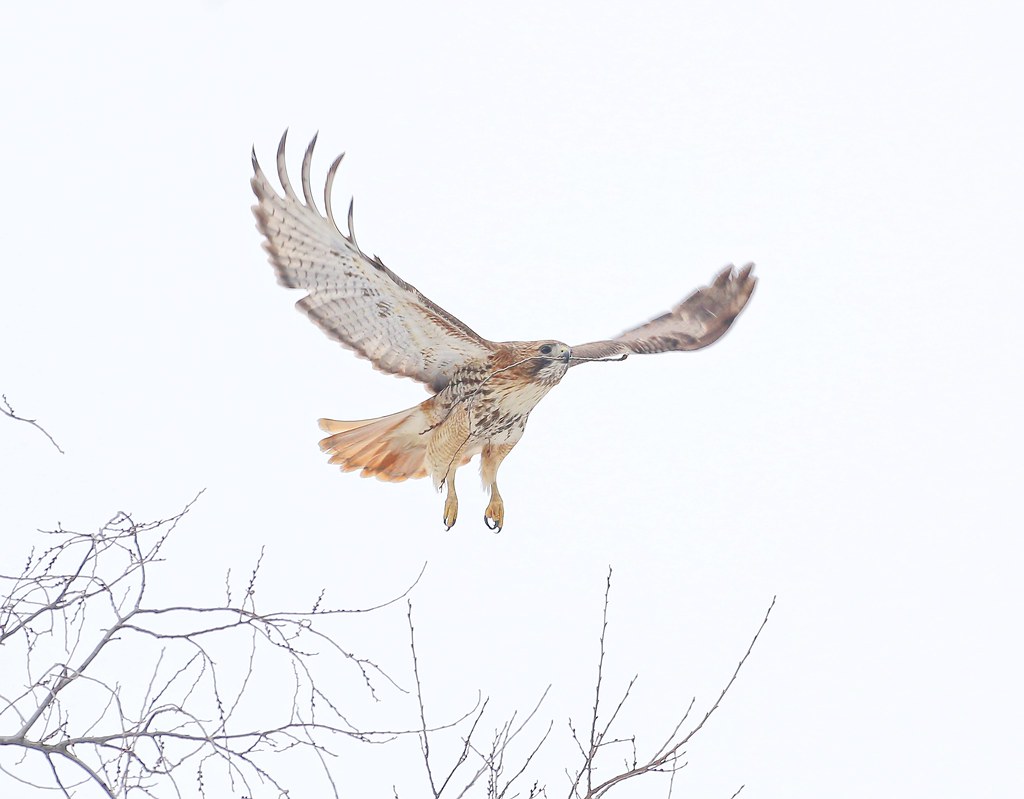 Dora put in as much work as Christo. Last year, it seemed Christo did all the building while Dora supervised, but this time, both birds are working equally hard.

Here, Dora carries a stick to the nest. 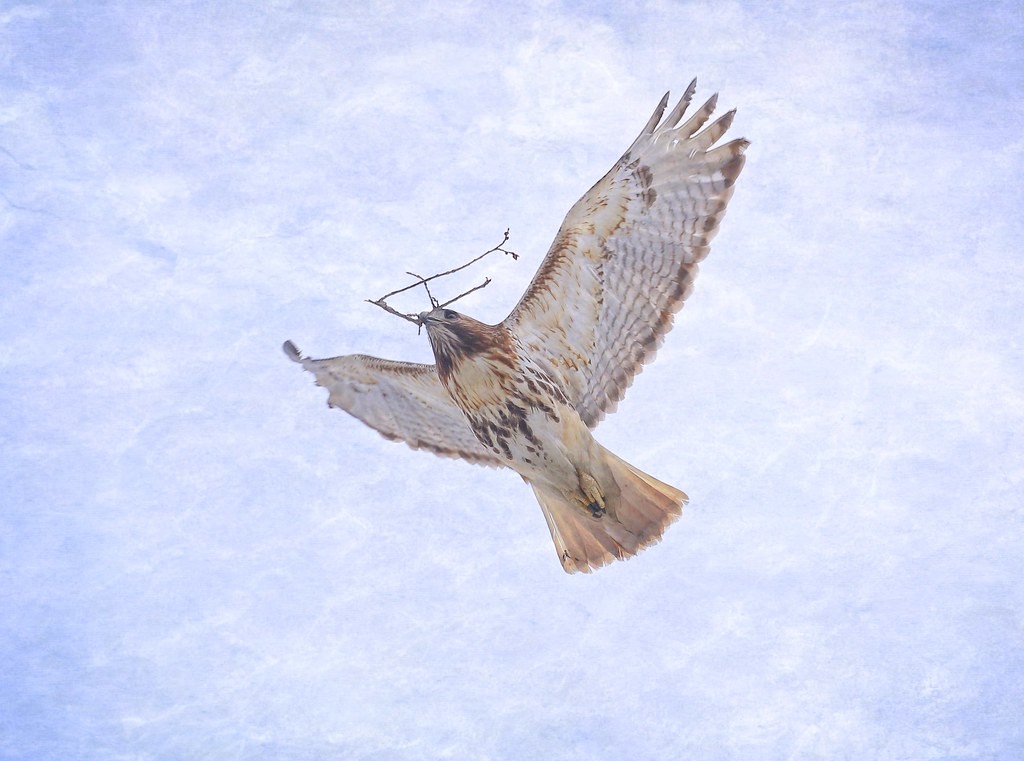 And here she is delivering it to Christo whose tail is sticking out of the nest. 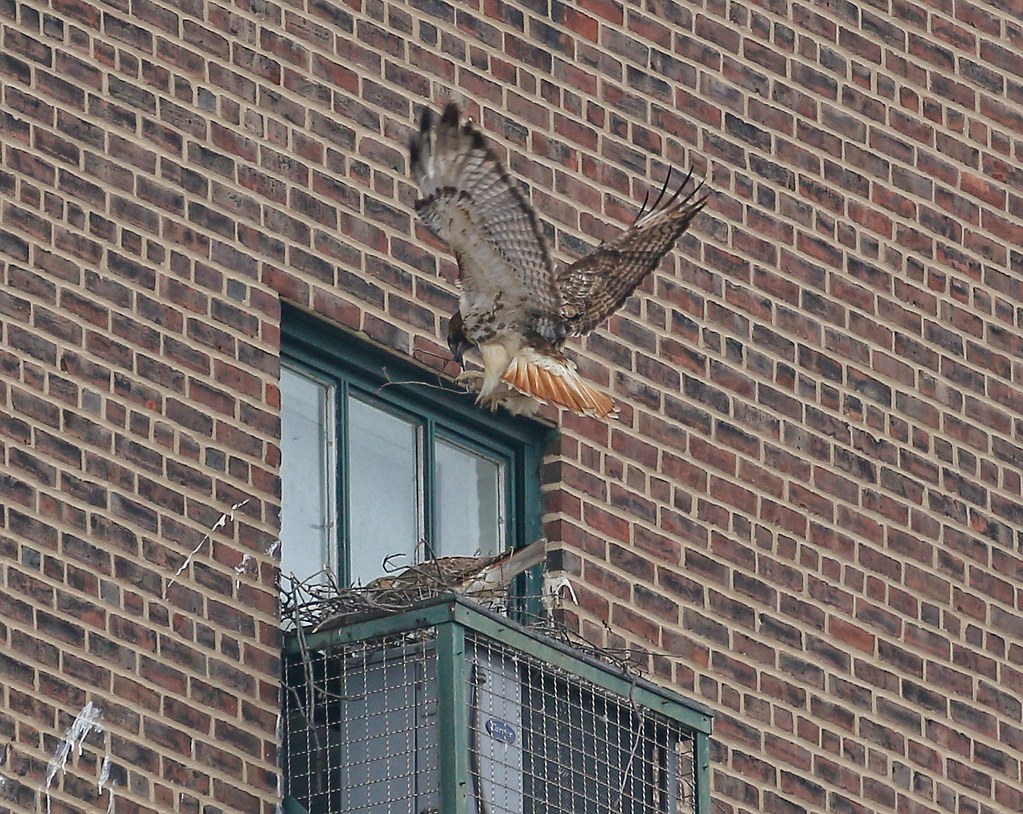 I love watching Christo peel bark from the trees.  He's so industrious. 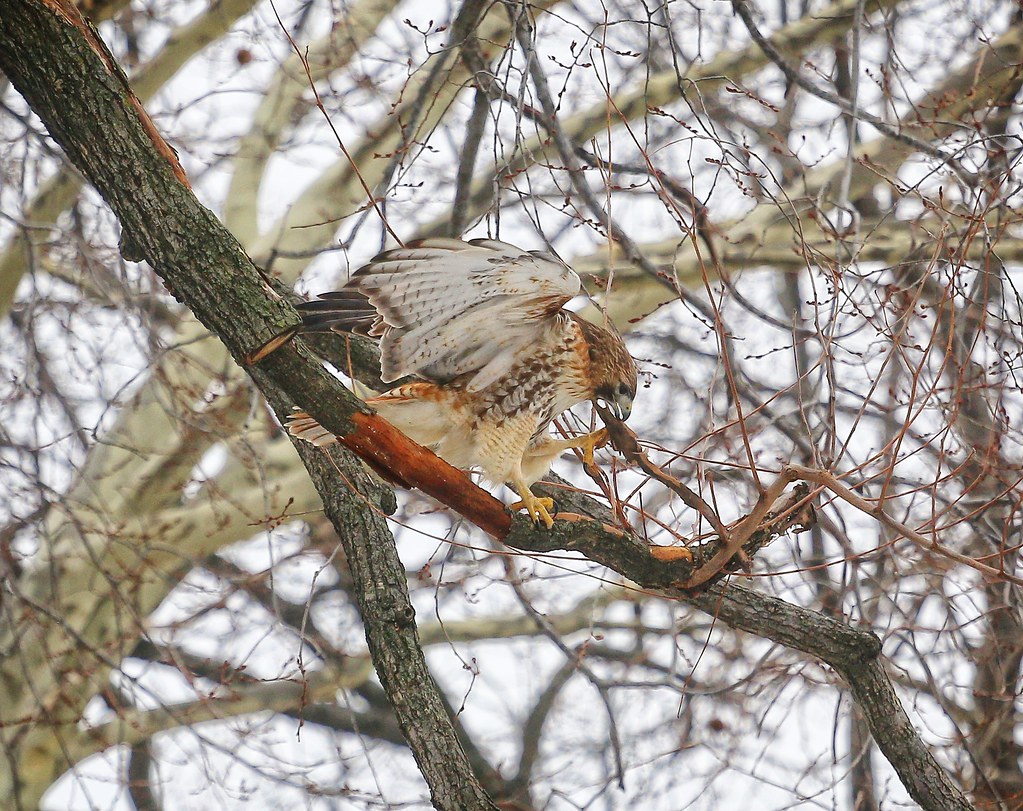 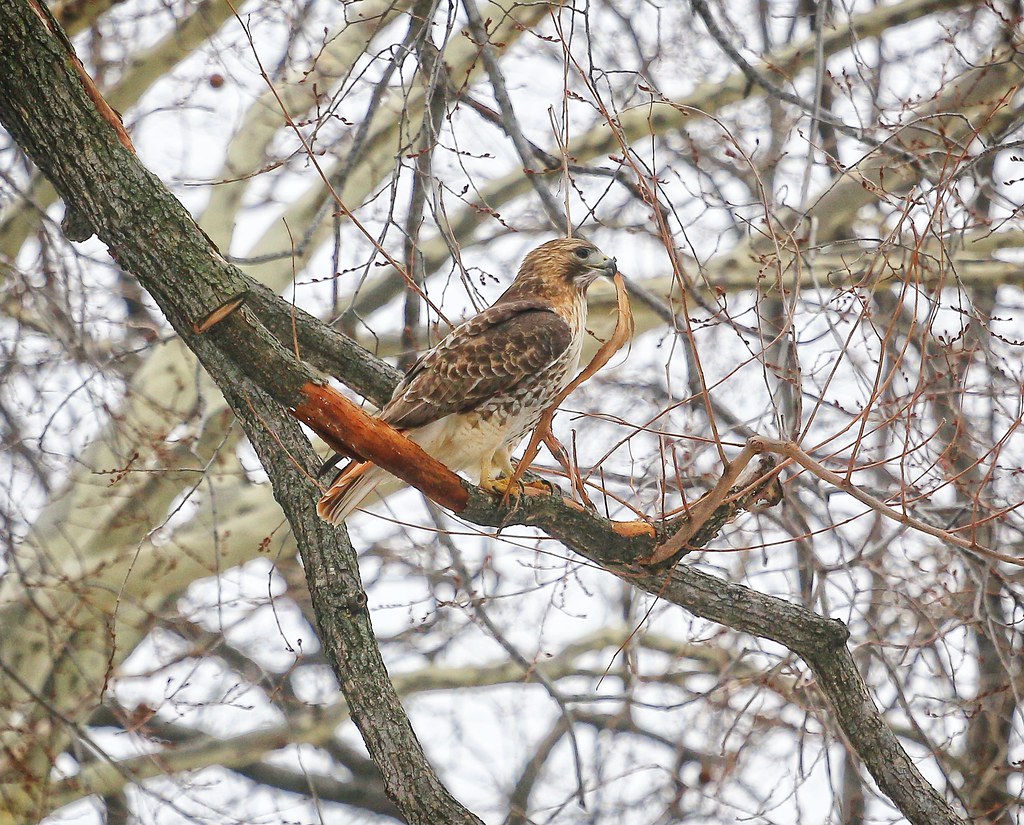 Here he is with bark from another favorite tree.  You can see how he's stripped part of the branch bare. 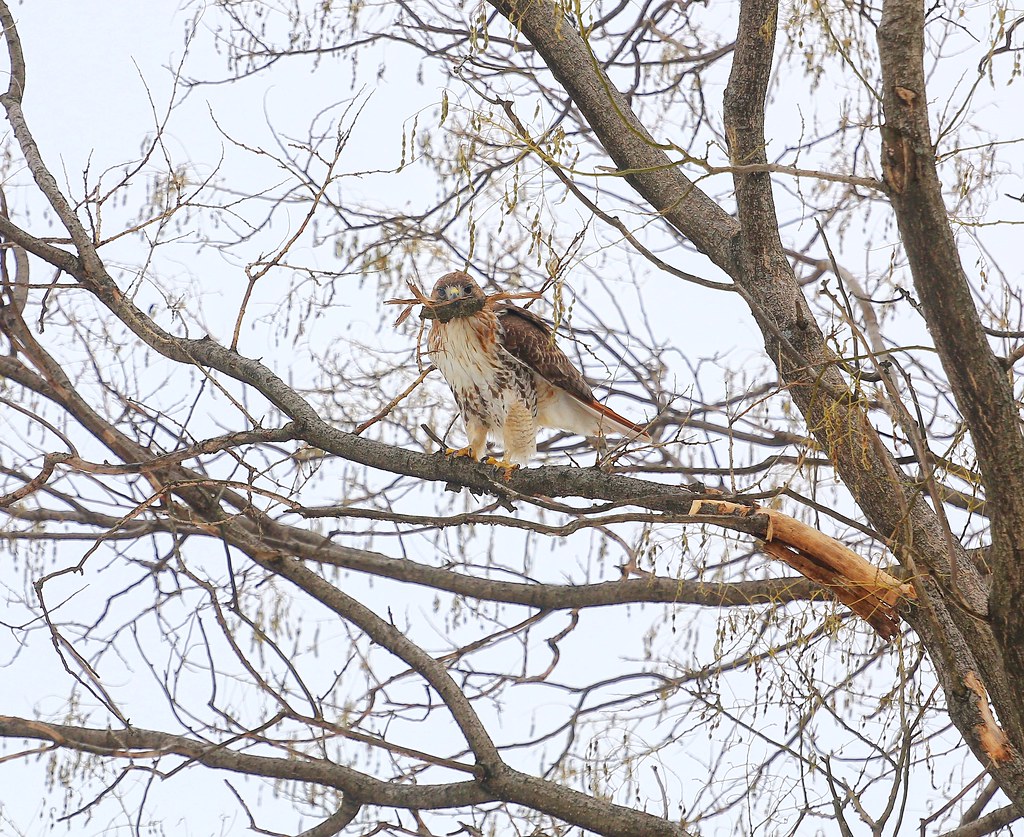 By late Monday, the nest was gone again.

Today, the birds made attempts to take sticks to the nest again, but the sticks were removed.  At one point near the end of the day, both birds circled over Avenue B and screamed.  I wanted to scream, too!

However, it looks like there is a reason for the nest removal.  The unofficial word on the street is the Christodora building is about to undergo a major renovation project and the building will be covered in scaffolding.  In that case, it's reasonable to try and prevent the birds from nesting at this stage rather than dealing with trouble later.

There is still time for the hawks to find a new nesting location.  Where that could be, though, I don't know.  They can't nest in the trees in Tompkins Square because there are too many squirrels who would destroy it.  I'm just hoping they pick a new place nearby where we can still observe them and enjoy the whole experience.

Yesterday and today, I saw Christo attempt to mate with Dora, but she wouldn't let it happen.  My birdwatcher friends tell me she won't agree to mate until a nest is built, so I hope that happens soon.

In the mean time, Christo still patrols the park... 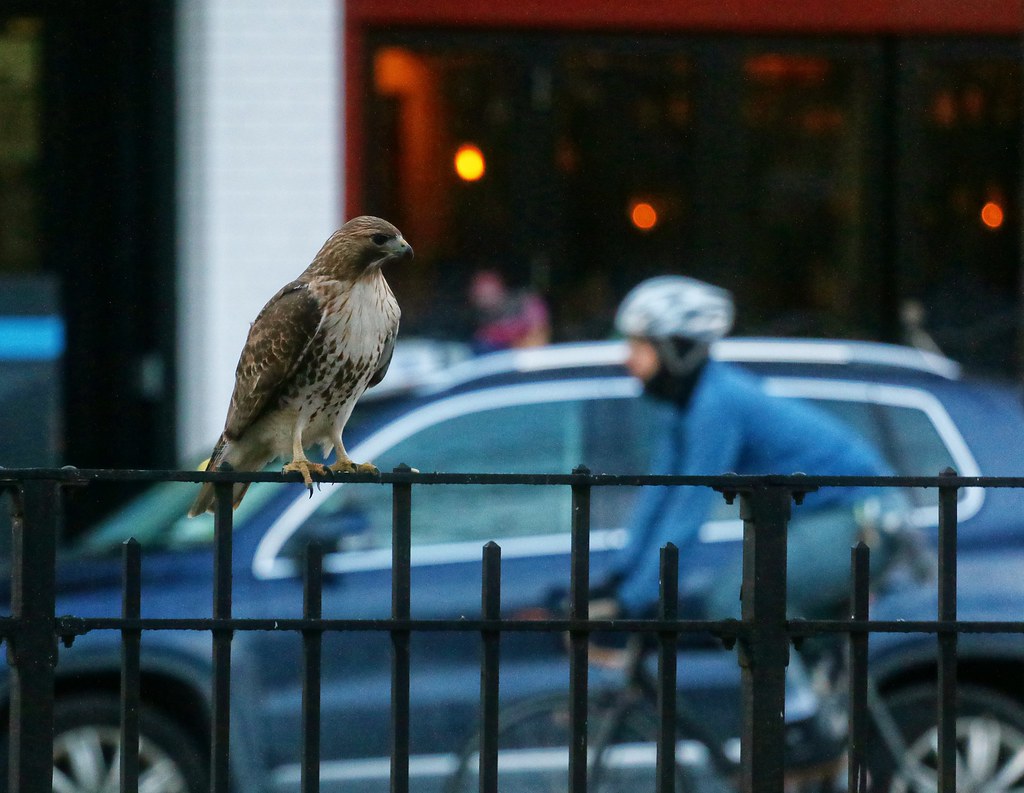 UPDATE:  Urban Hawks also has a post on this subject.

Previously.
Posted by Goggla at 8:23 PM