I had a lot of fun this last weekend watching the Tompkins Square hawk fledglings play around in the park.  The challenge is getting all three in one photo, but they don't make it easy.  Below is the best shot I could get of all three this last Saturday.  Can you find the third?  Its head is just visible at the feet of the one on the left. 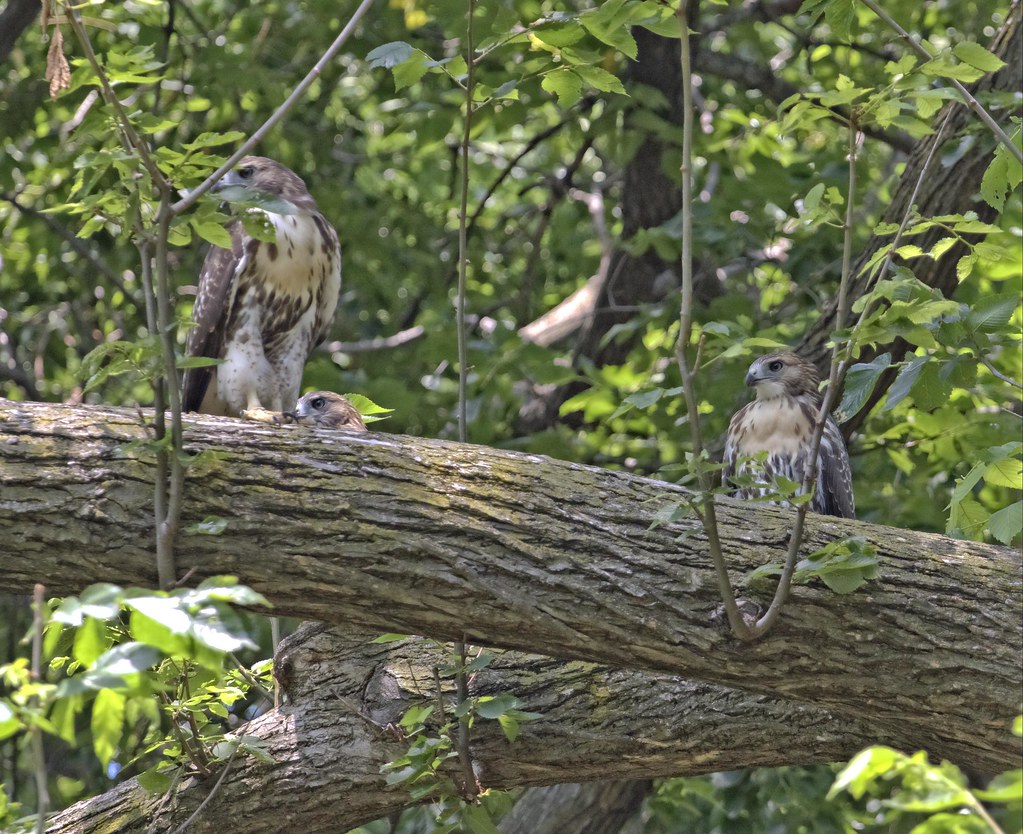 Two often pose closer together.  I don't know if it's always the same two, or if they mix it up. I'm still having difficulty telling them apart.  One is definitely quite large, another is rather slender and pale, and I'm not sure about the third.  It would be nice if they all lined up on a branch and all looked the same direction, but that would be as easy as herding cats. 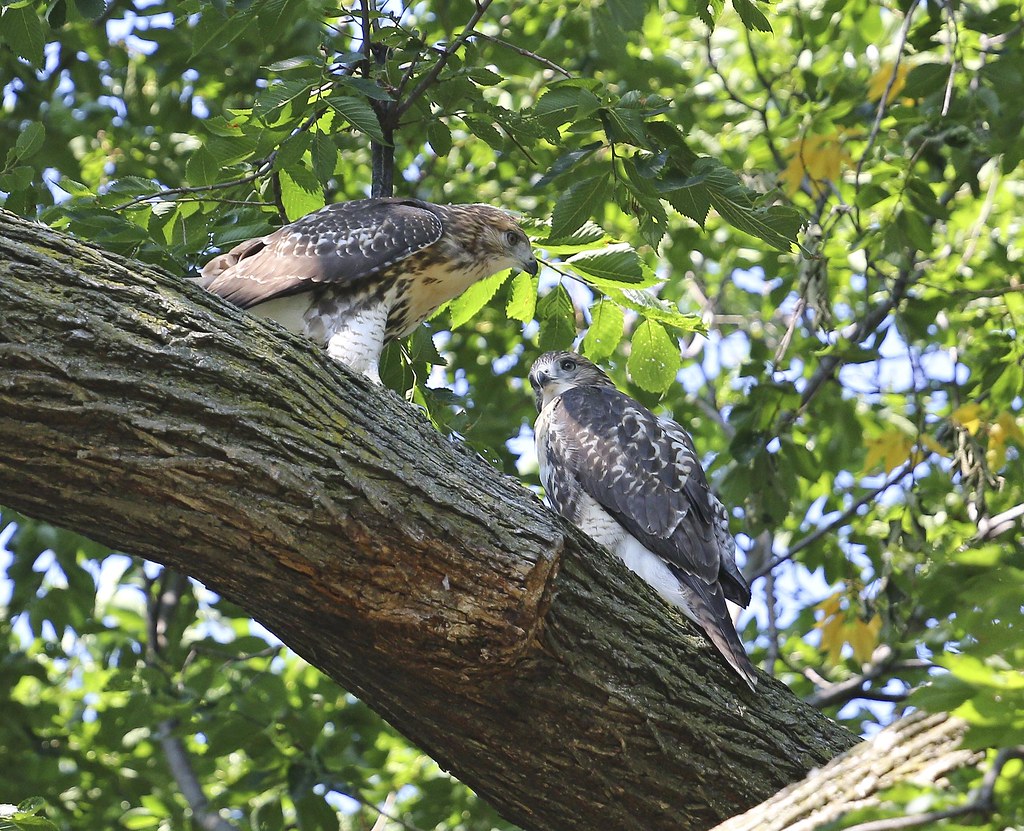 This one has a very light face and not as much coloring on the chest. 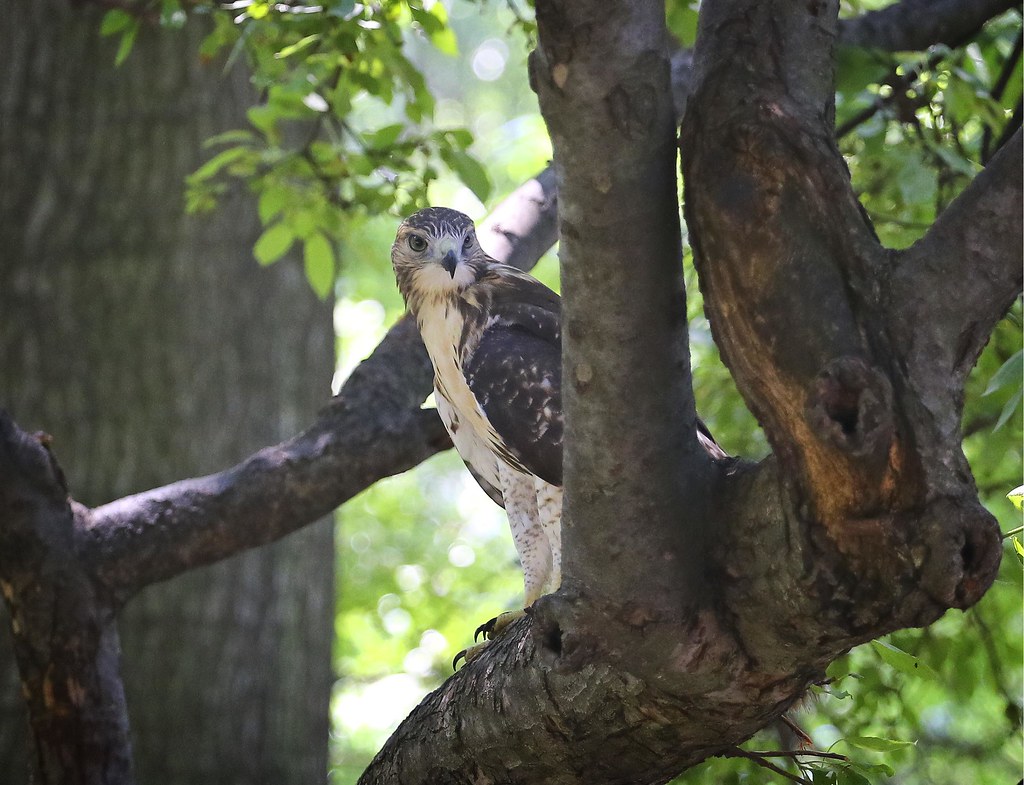 I love their eye color at this age.  While Christo and Dora have dark brown eyes, the fledglings' are greenish amber. 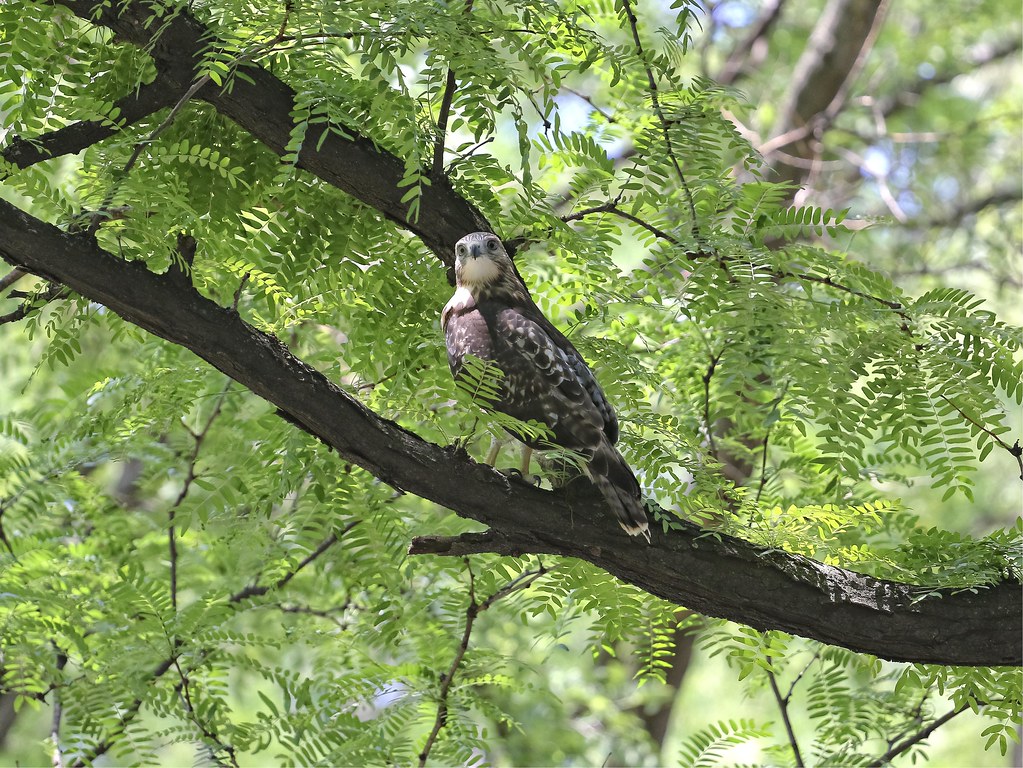 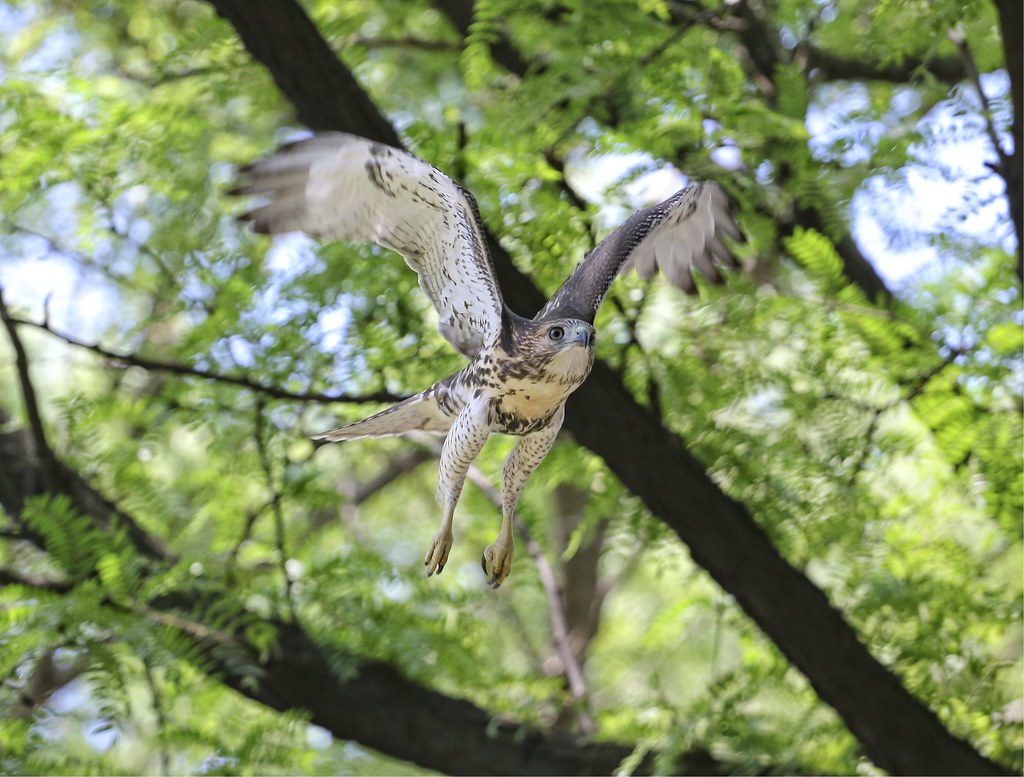 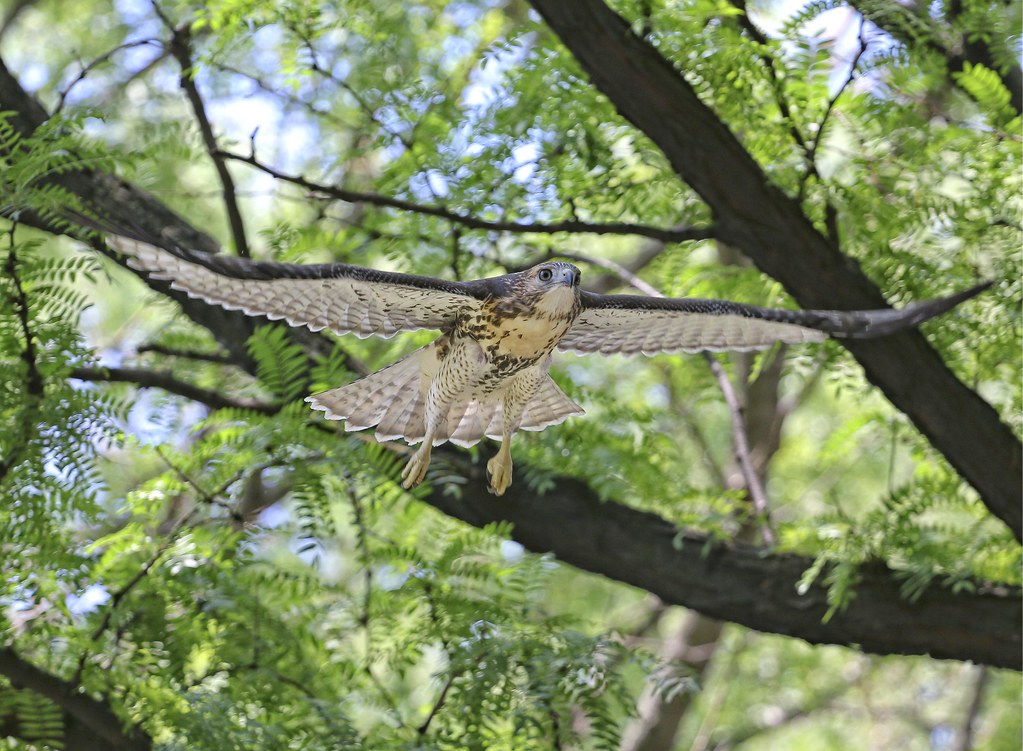 All three have heavily speckled legs. 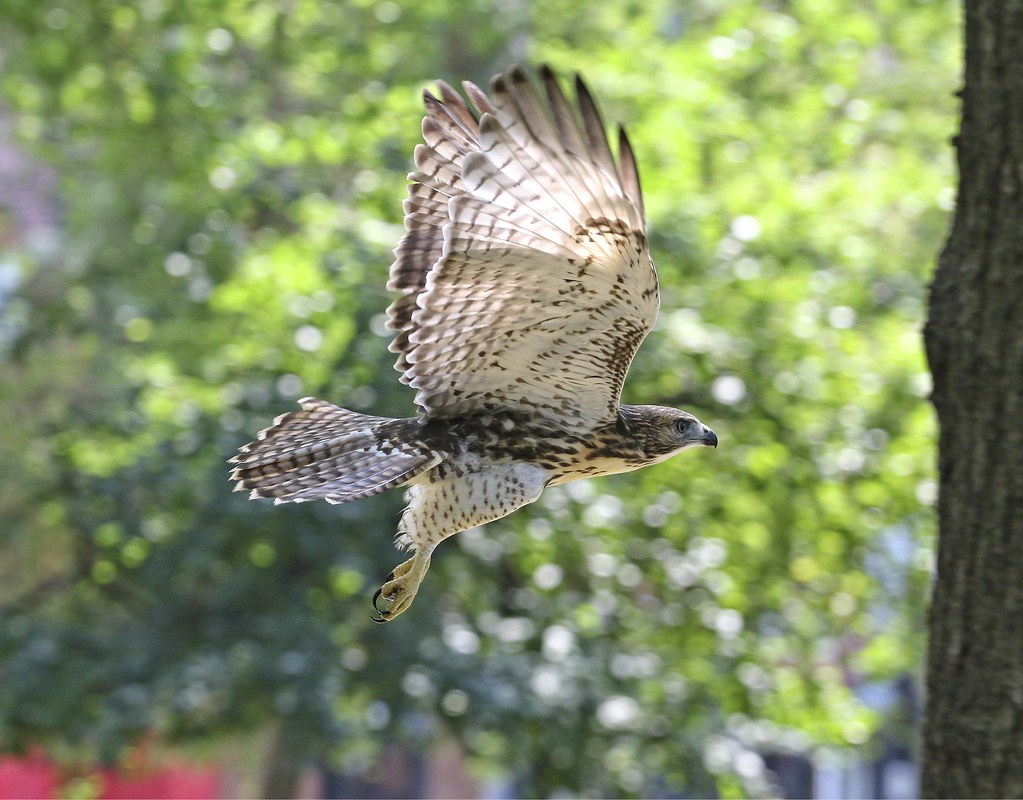 As it was a hot afternoon, one of the fledglings decided to take a dip in the kiddie pool. 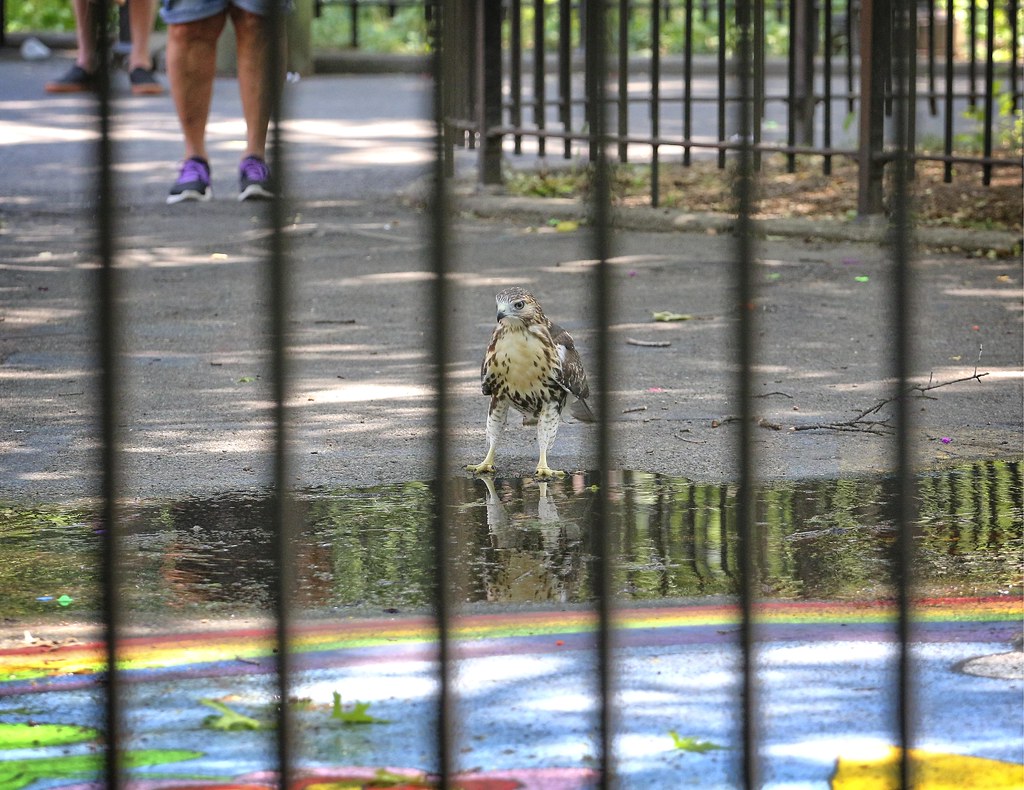 A couple of (human) kids ran around in the play area while the hawk bathed.  The hawk wasn't phased, and the children didn't seem to notice anything odd about a hawk playing in their sprinkler. 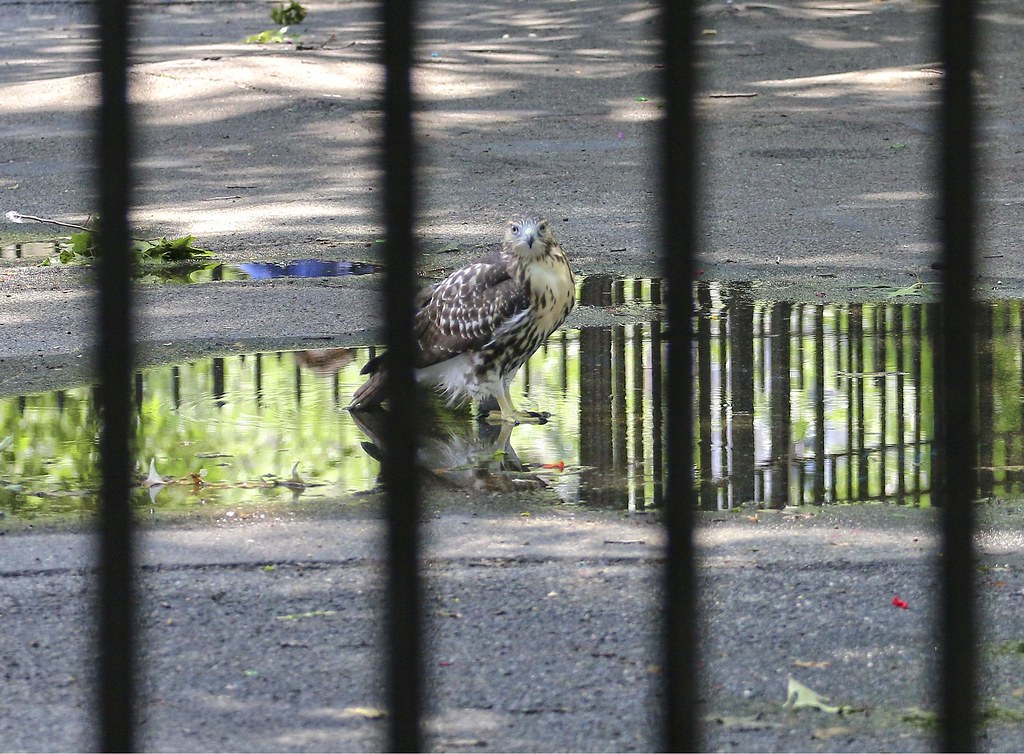 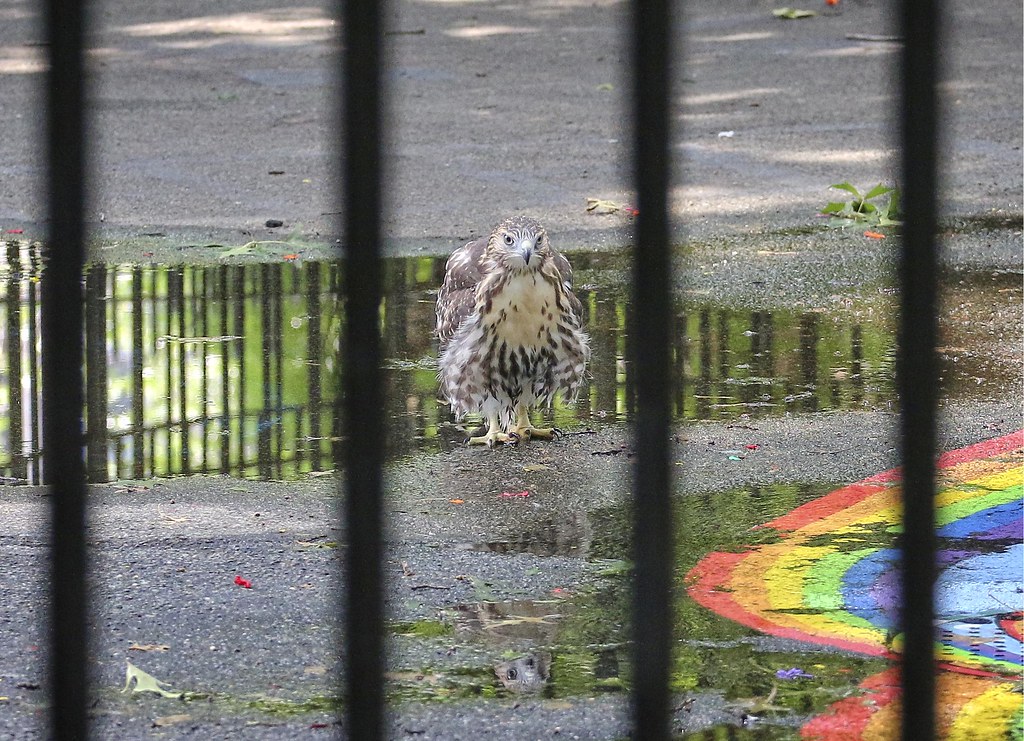 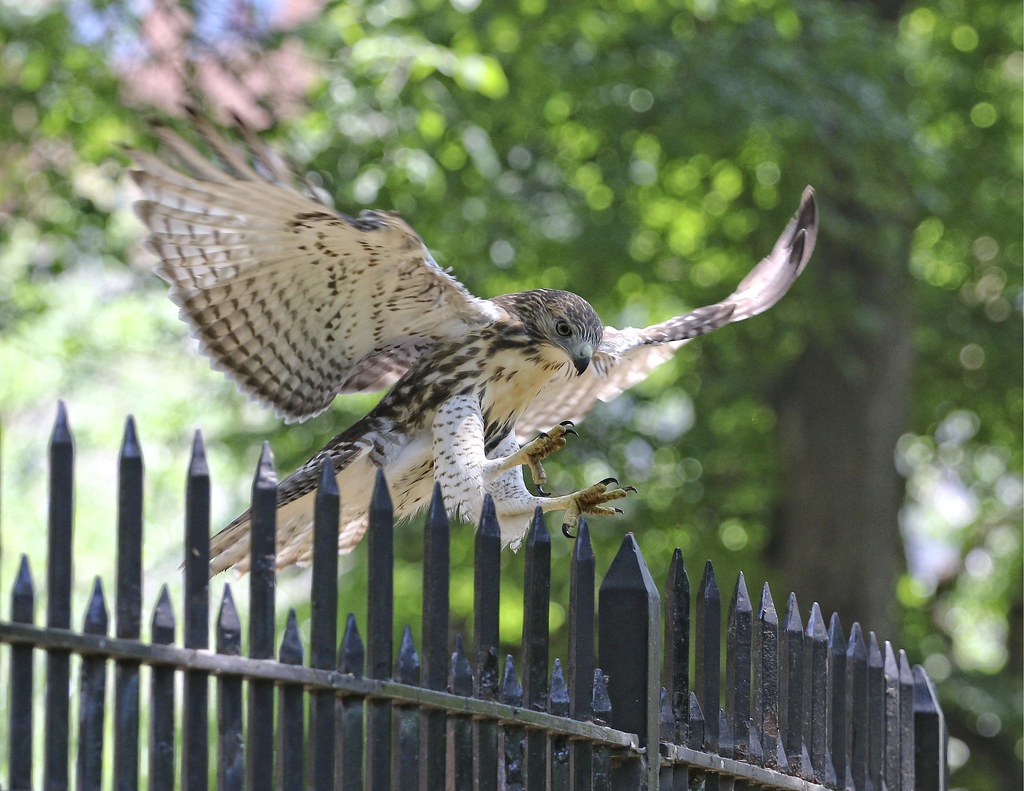 Off to the playground! 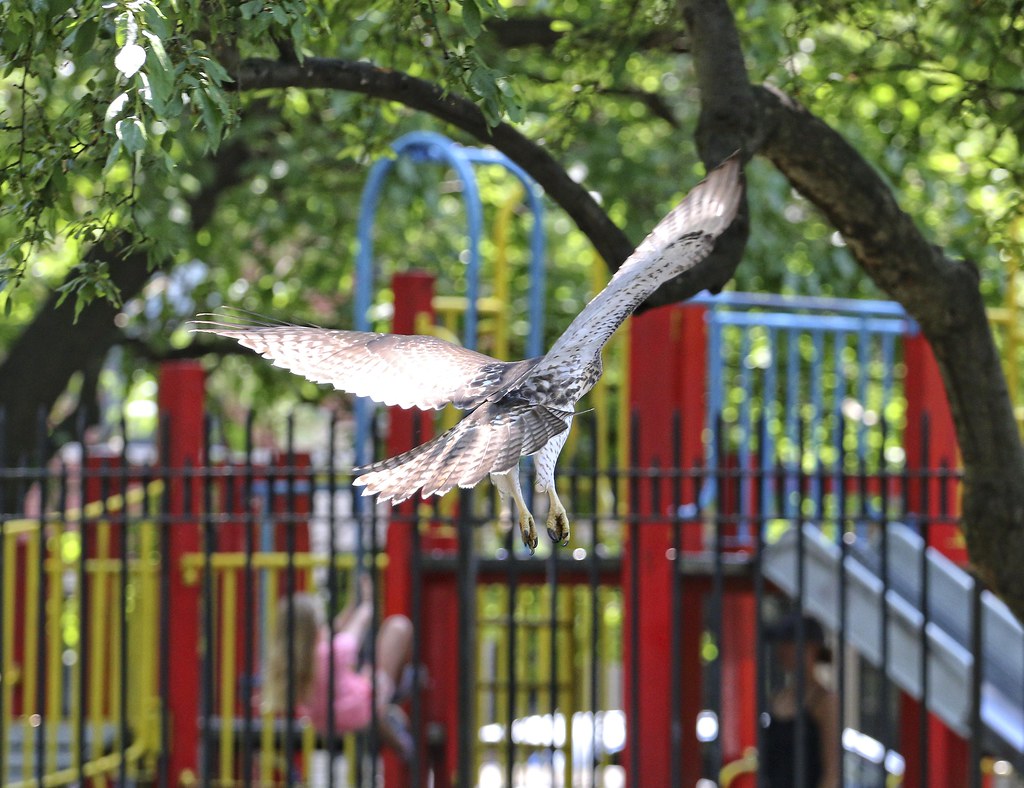 People in the park often ask me how I know we're looking at juvenile hawks.  One way to tell is by looking at their tails - the adults have bright rusty red tails and the fledglings all have brown striped tails, as pictured above.

Not everyone around the park is excited to see the hawks.  This mockingbird relentlessly mobbed this fledgling, who was minding his/her own business atop St Brigid's. 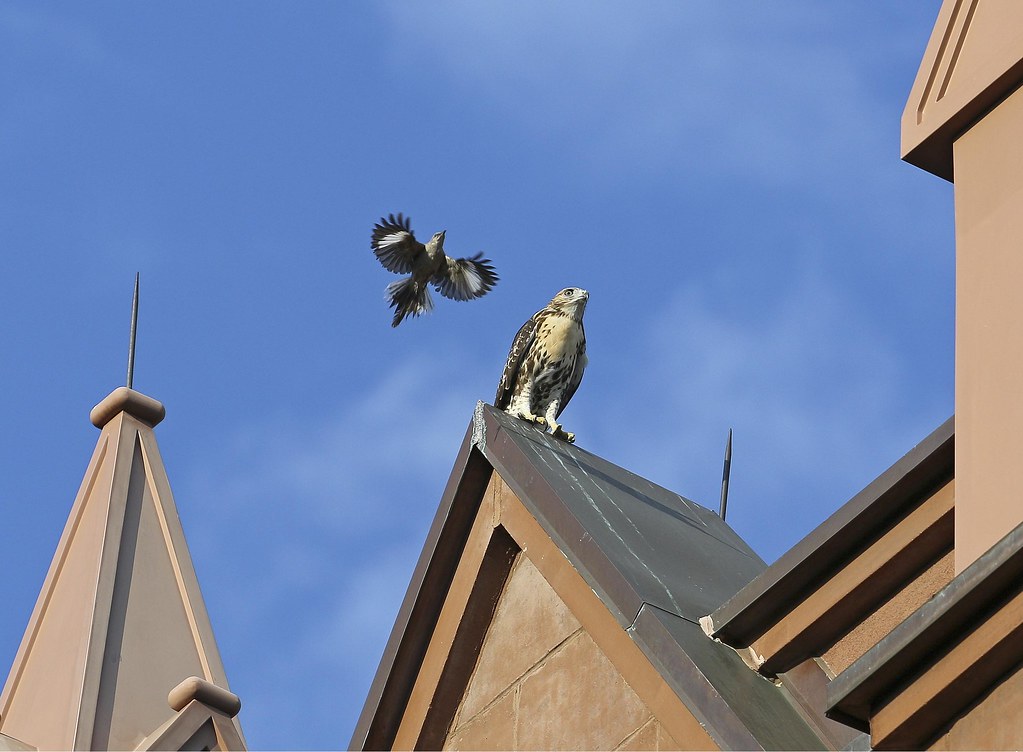 The mockingbird got really aggressive, actually landing on and clawing at the hawk's back. 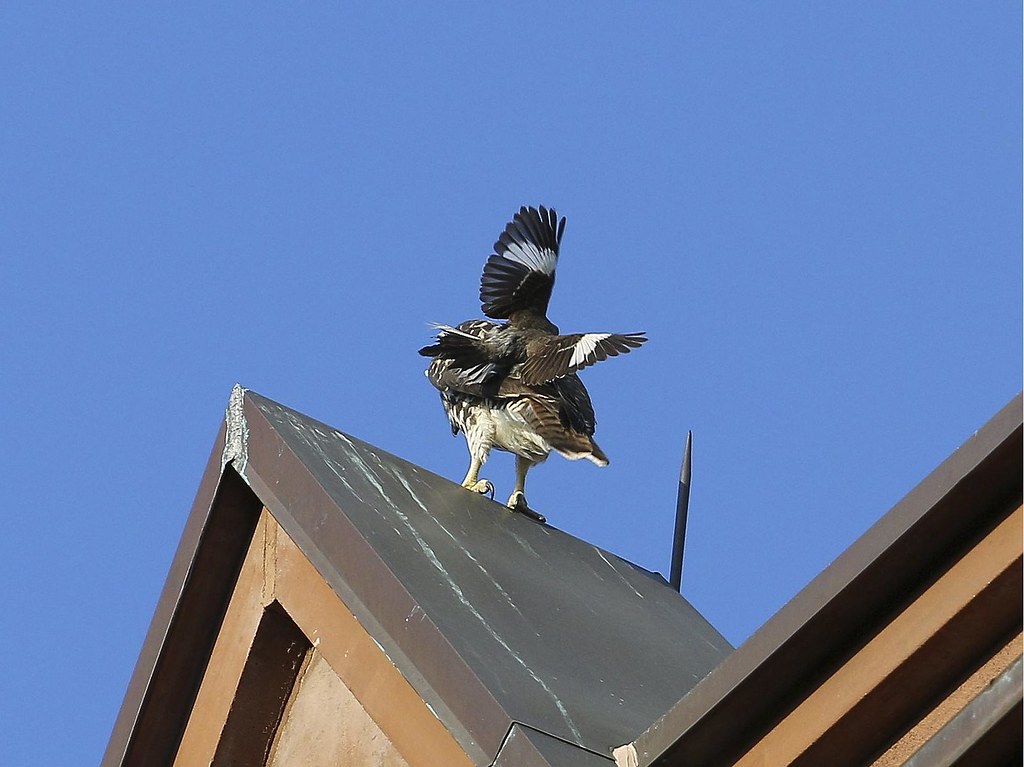 I took some video of the attack, which looks painful.  Eventually, the hawk couldn't take any more and had to fly off.

After a long day of flying, eating, playing and dealing with hostile neighbors, it was time for a nap... 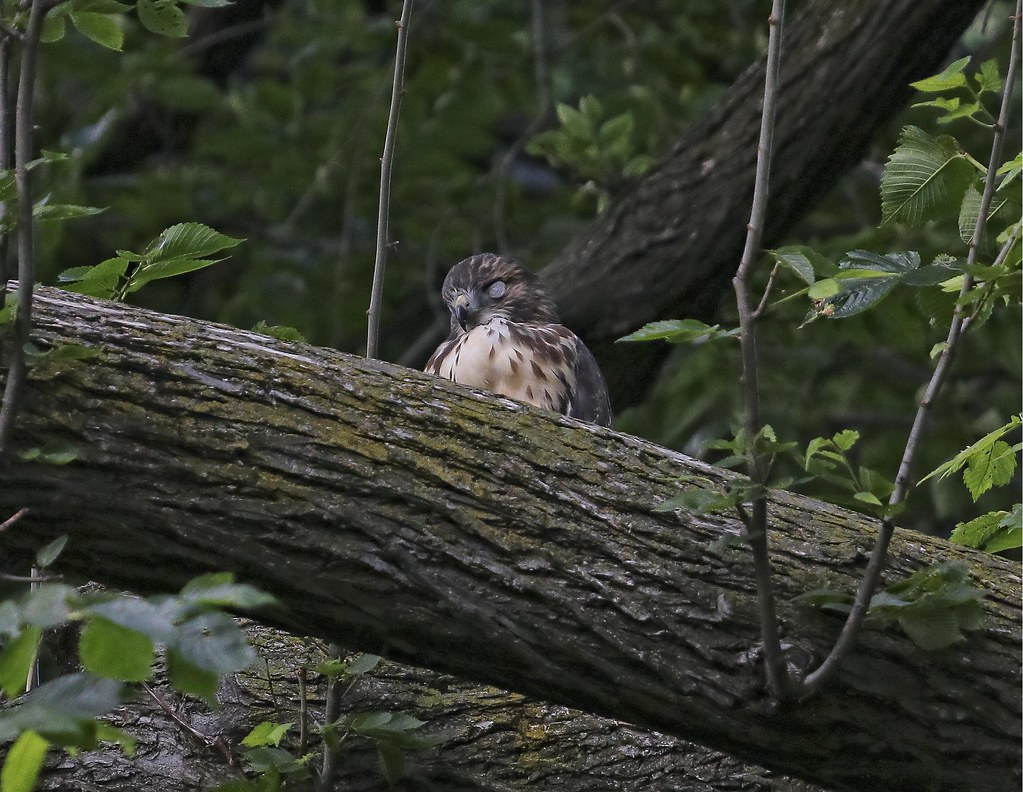