It's been a week since one of the Tompkins Square red-tailed hawk nestlings passed away and I am concerned about the surviving sibling. Although it looked okay at the time of the last post, it seems to now be suffering from some kind of illness.

We still don't know what killed the other nestling and the body has not been recovered. I'm not sure if the parents removed it from the tree, or if it's still up there somewhere. Unfortunately, without the remains, it won't be possible to do any testing and get definite answers about the fate of the hawk. 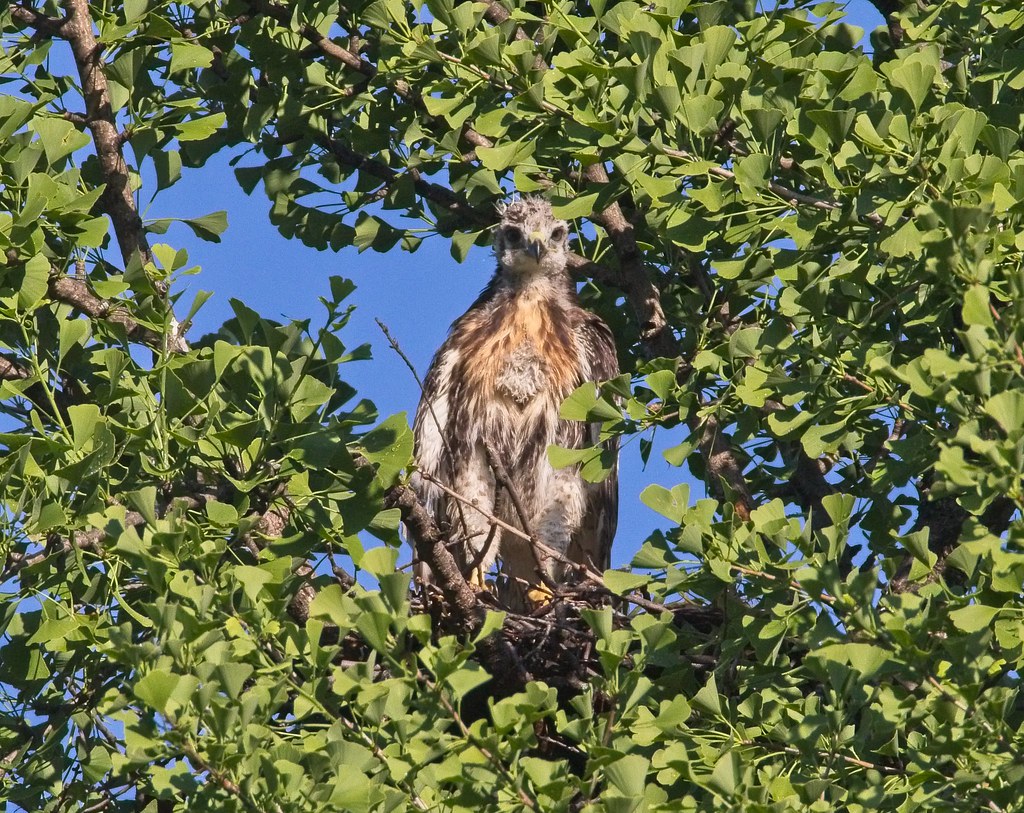 On the morning of May 31, after the first chick (I think it was the younger of the two) passed away, the surviving sibling stood on the edge of the nest and tried to dry its wet feathers. 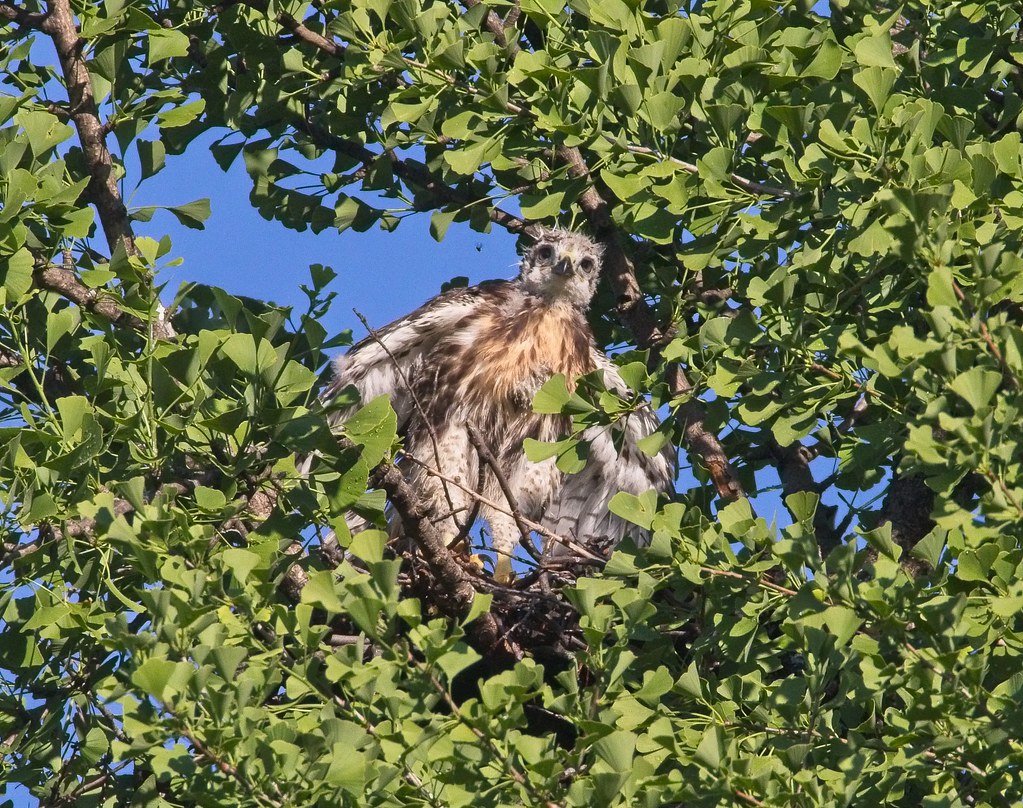 There had been a thunderstorm the night before - one of many in recent weeks - and the chick was totally soaked. You can see water droplets on the leaves in front of the hawk in the photo below. I don't know if the continuous wet weather conditions have had anything to do with the health of the birds. 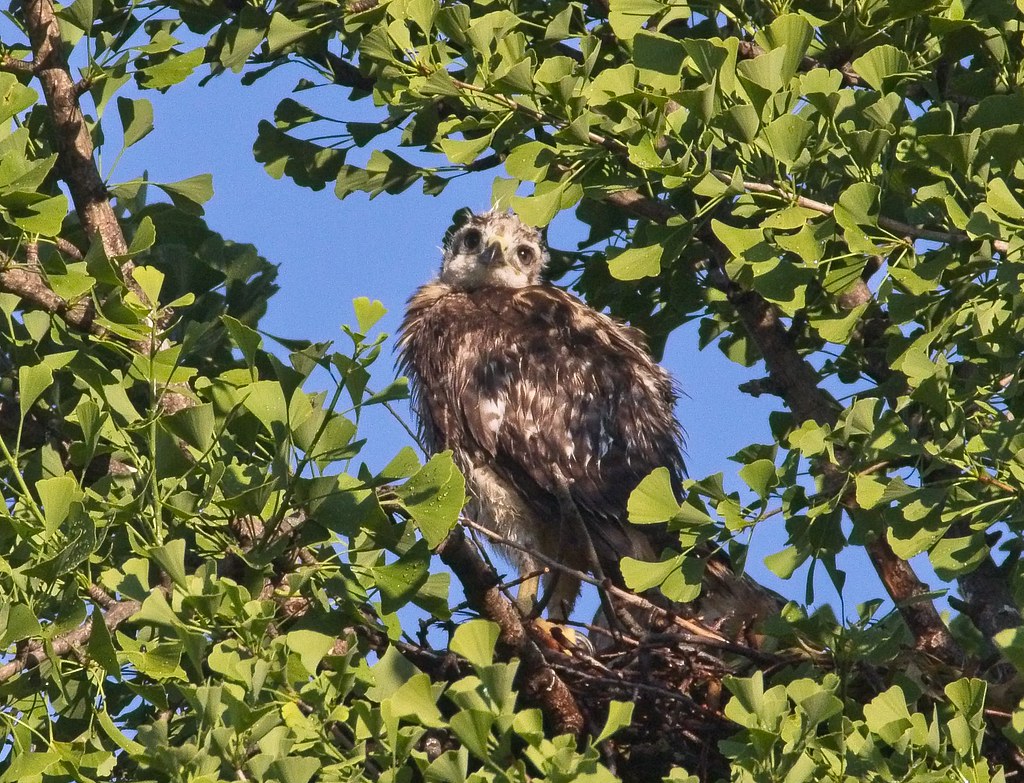 This morning (June 6), I found the nestling perched in the same place, but it kept one or both eyes closed, which is not normal. 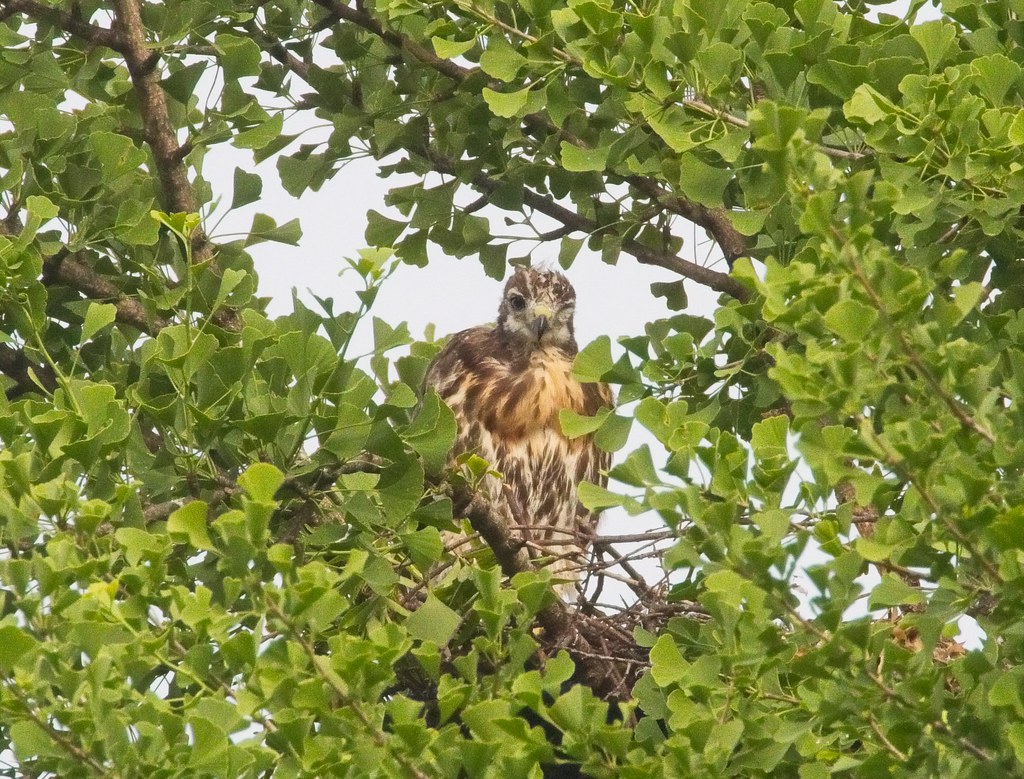 At this age, the hawk should be jumping, flapping, and exploring the tree. Instead, it has spent most of the week sitting still or lying down. It does seem to have an appetite, so I hope food is giving it strength. 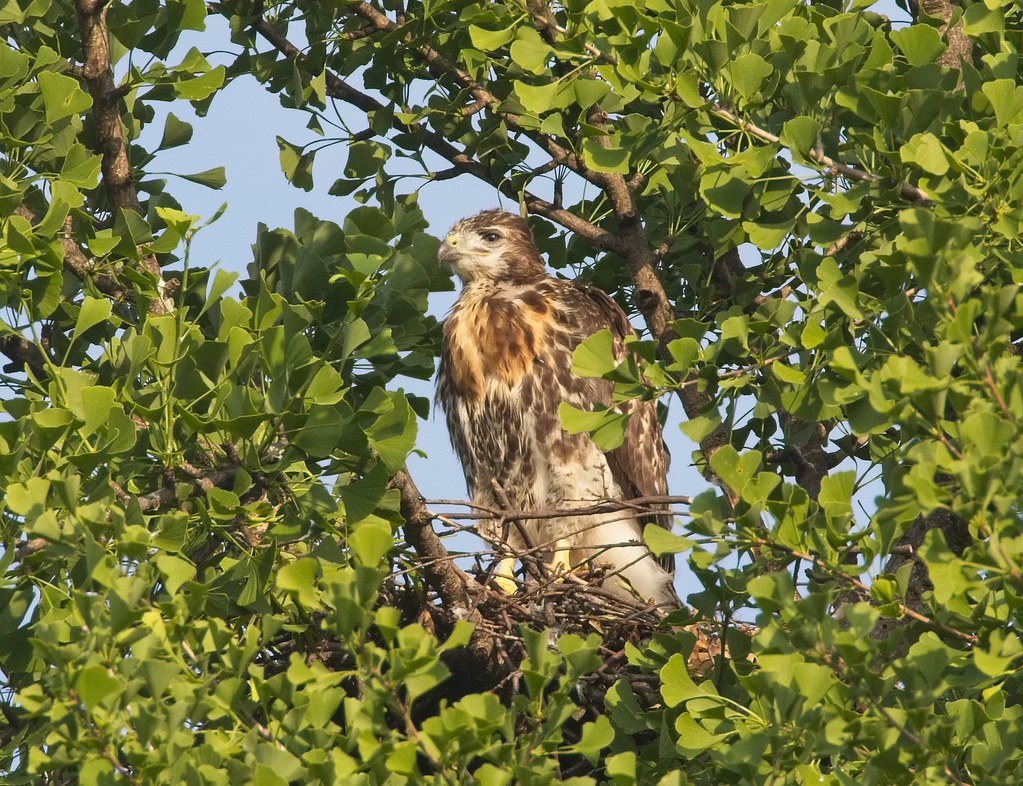 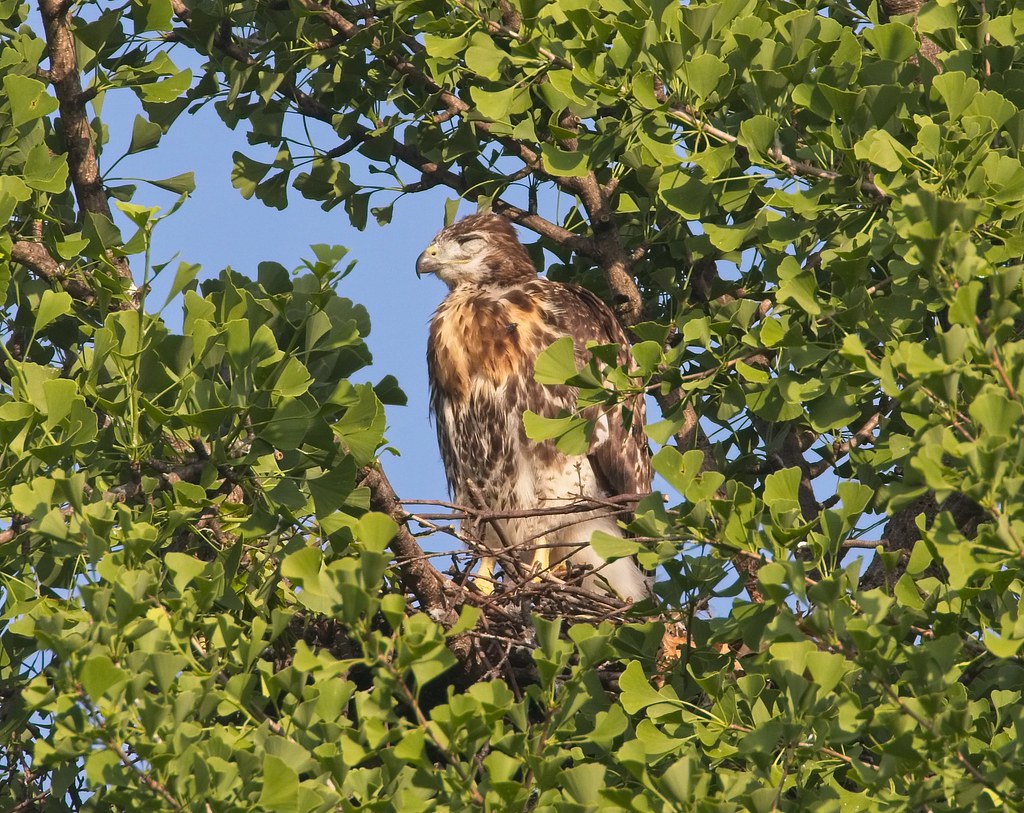 Below, you can actually see three flies on the chick's wing. 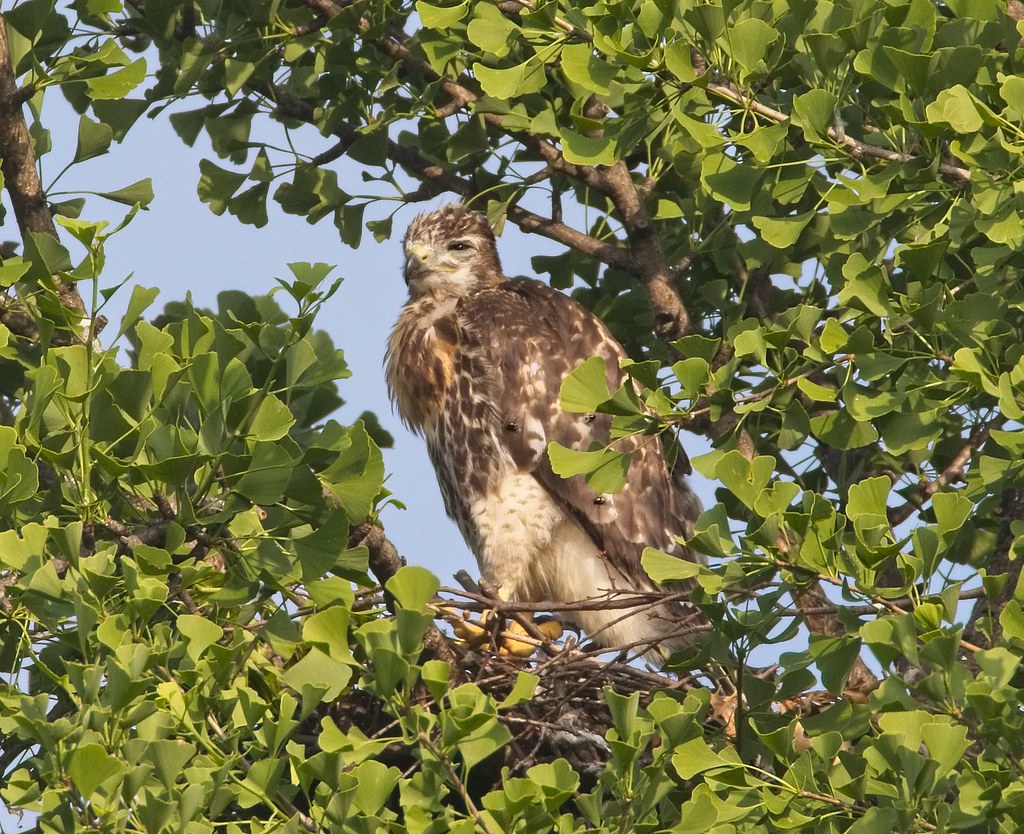 At this point, there is nothing anyone can do to help. The nest is inaccessible and it is not known what is wrong. It's possible the nestling can pull through what ever is ailing it, and maybe food and rest are what it needs.  I had originally predicted this hawk would fledge the first week of June, but it's apparent that is not going to happen.

Best case scenario is the hawk recovers, takes its time, and fledges later. The three hawklets over at Washington Square Park are a few days younger that the Tompkins chick, and they are doing very well despite losing their dad. You can follow the activities of that family over at Roger Paw's blog.

Earlier in the week, Urban Hawks paid a visit to Tompkins Square and took some video of the nestling. Note the windy conditions blowing the leaves around and obscuring the nest, which has been one of the factors making this nest so difficult to observe.

Fingers crossed there will be a happy outcome here. I will update as I know more.