Heading into the holidays with red-tails Christo and Amelia

Hawk activity is ramping up as we head into the winter holidays. This is usually the time of year when we can expect to see more of our local red-tailed hawk pair, Christo and Amelia, around Tompkins Square Park.

I caught up with them on December 17 as they enjoyed the view from one of their favorite perches, the roof of the Christadora building on Avenue B. Amelia is on the left and Christo is on the right. 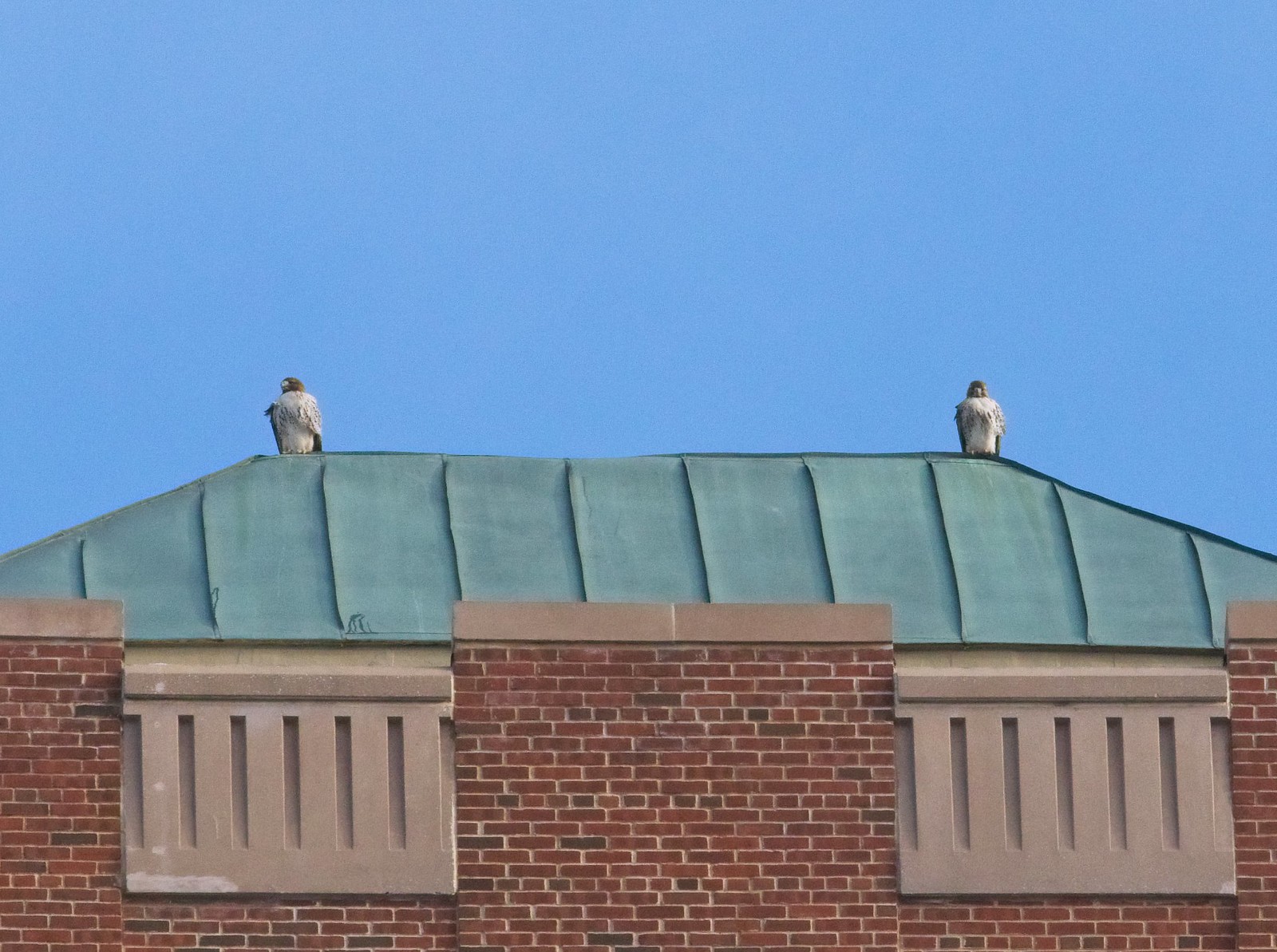 For better context, I took some video which shows how far above the park they are.

At some point, they both flew across the park to Avenue A to another of their favorite hangouts, the cross of St Nicholas of Myra church. 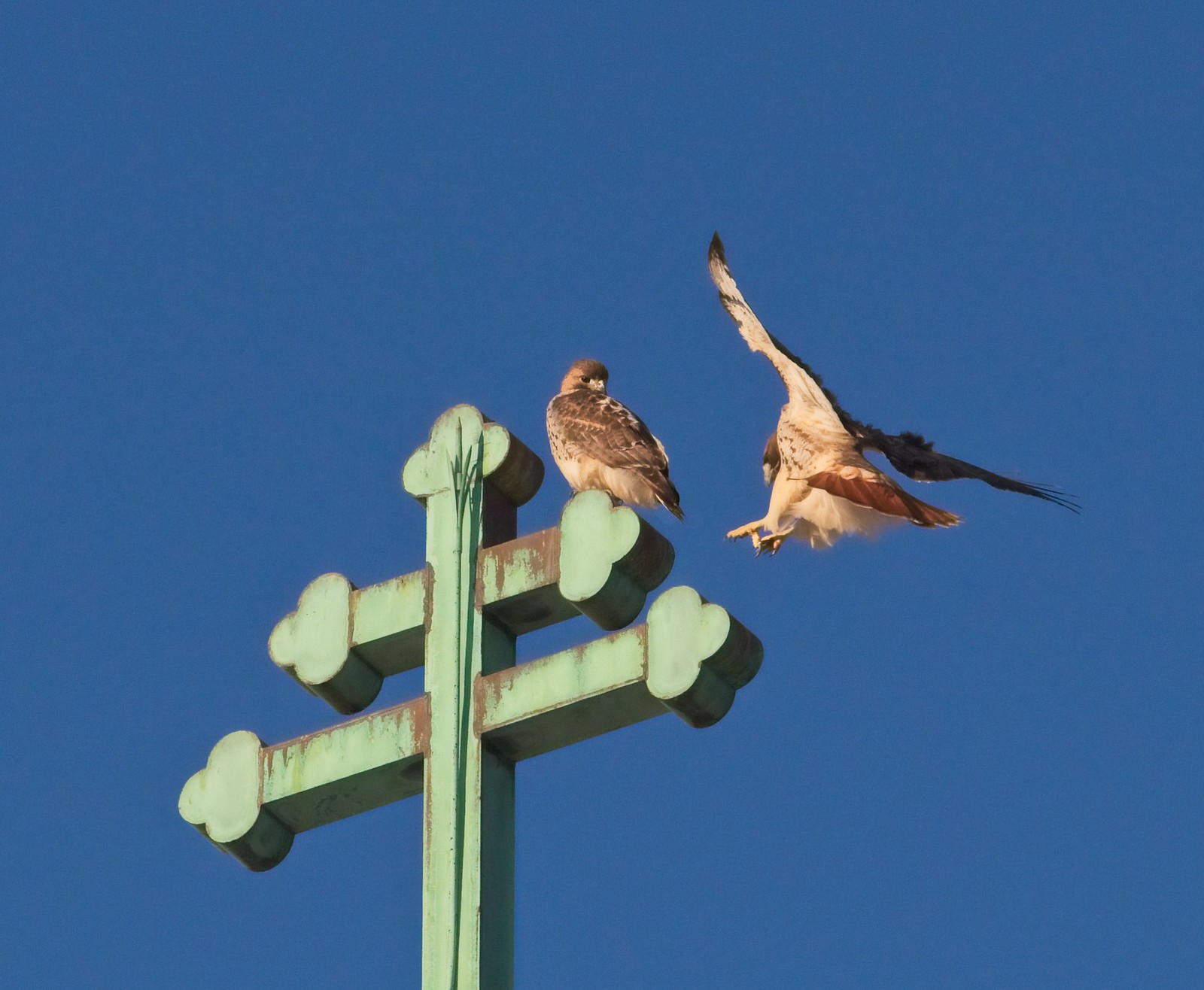 Christo looks on as Amelia makes her landing. 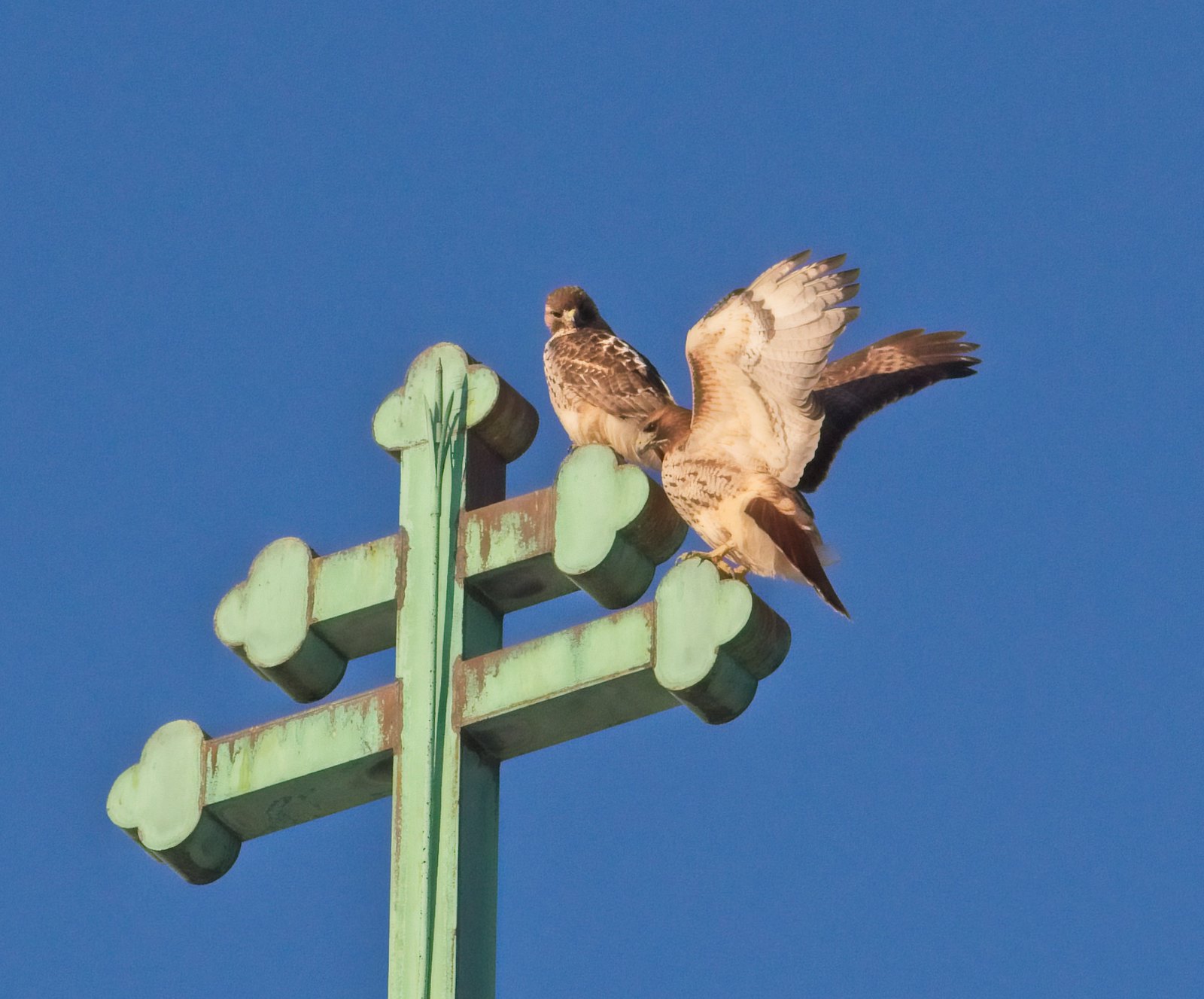 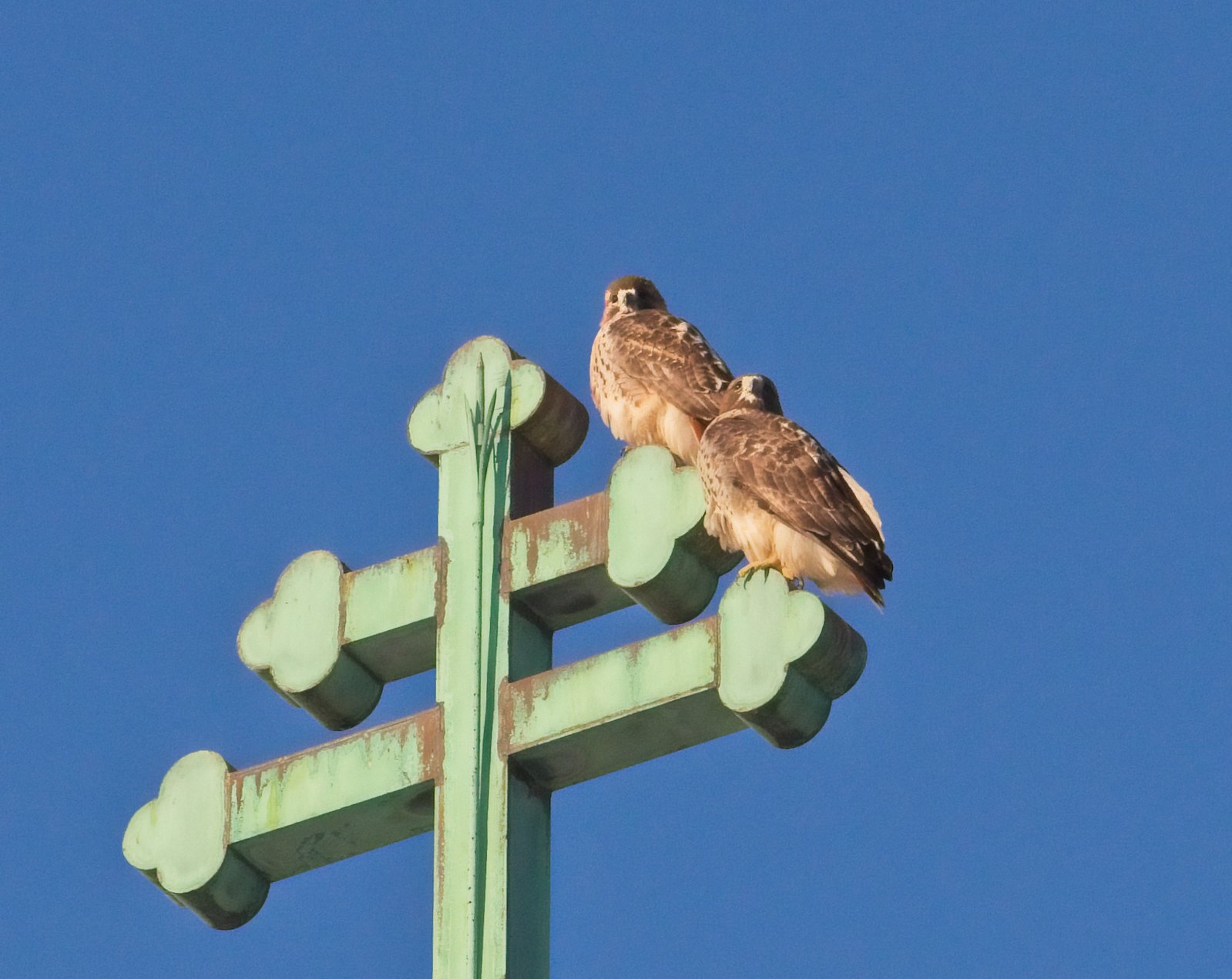 Eventually, Christo took off and flew over me. 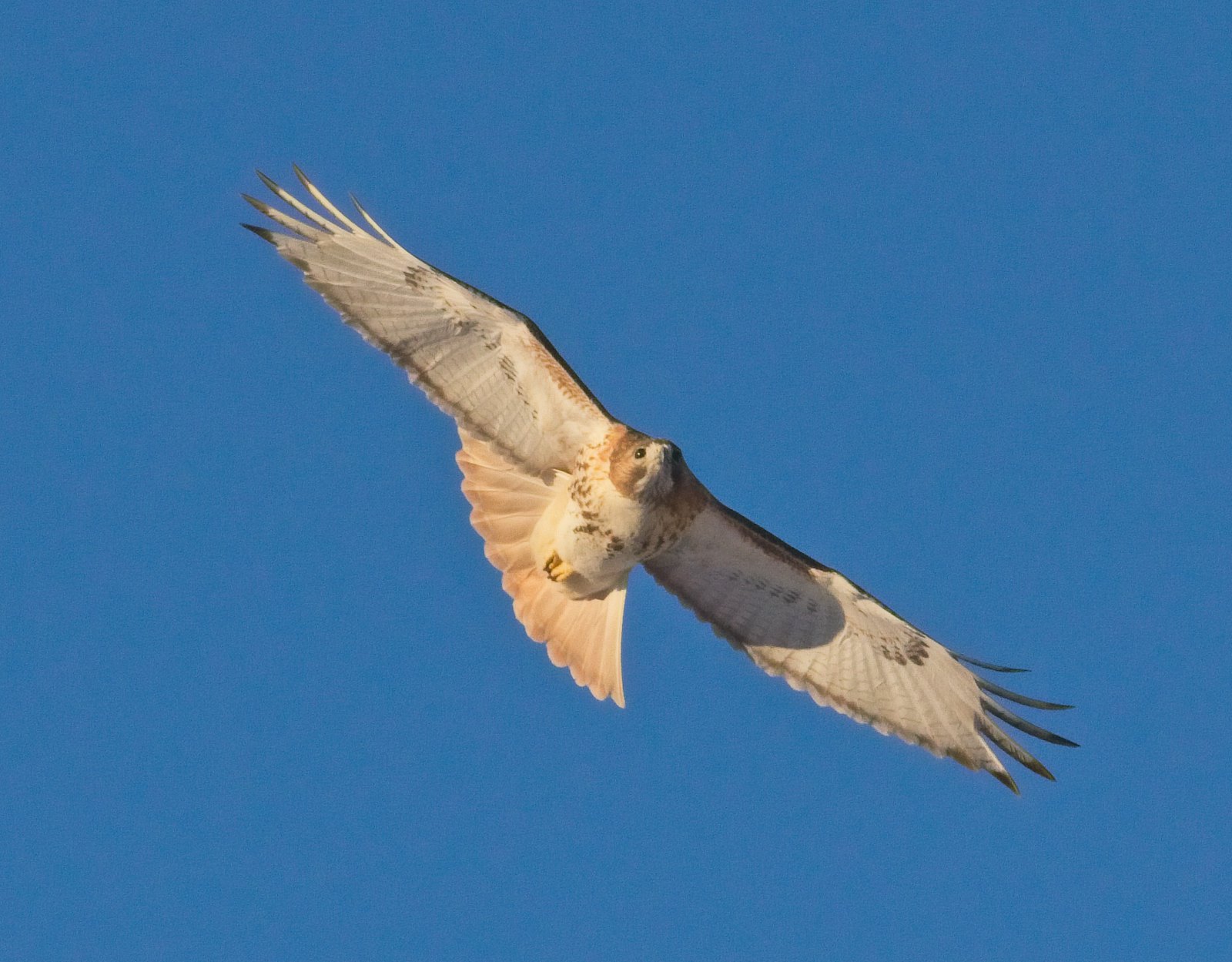 Amelia soon followed and that was the last I saw of them that day. 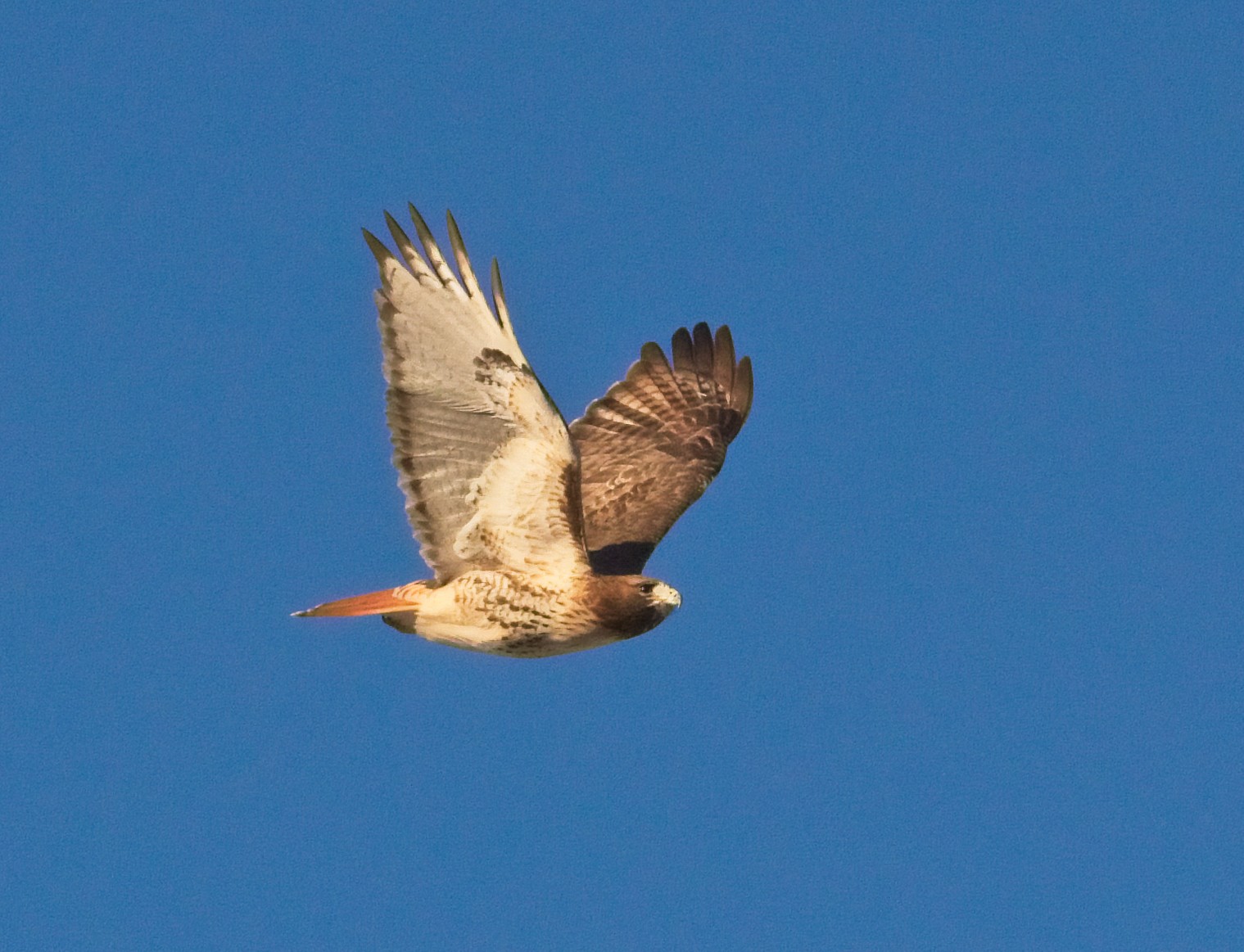 On December 21, I found Christo just as he caught a small rat. He took it to a quiet perch to eat without being disturbed. 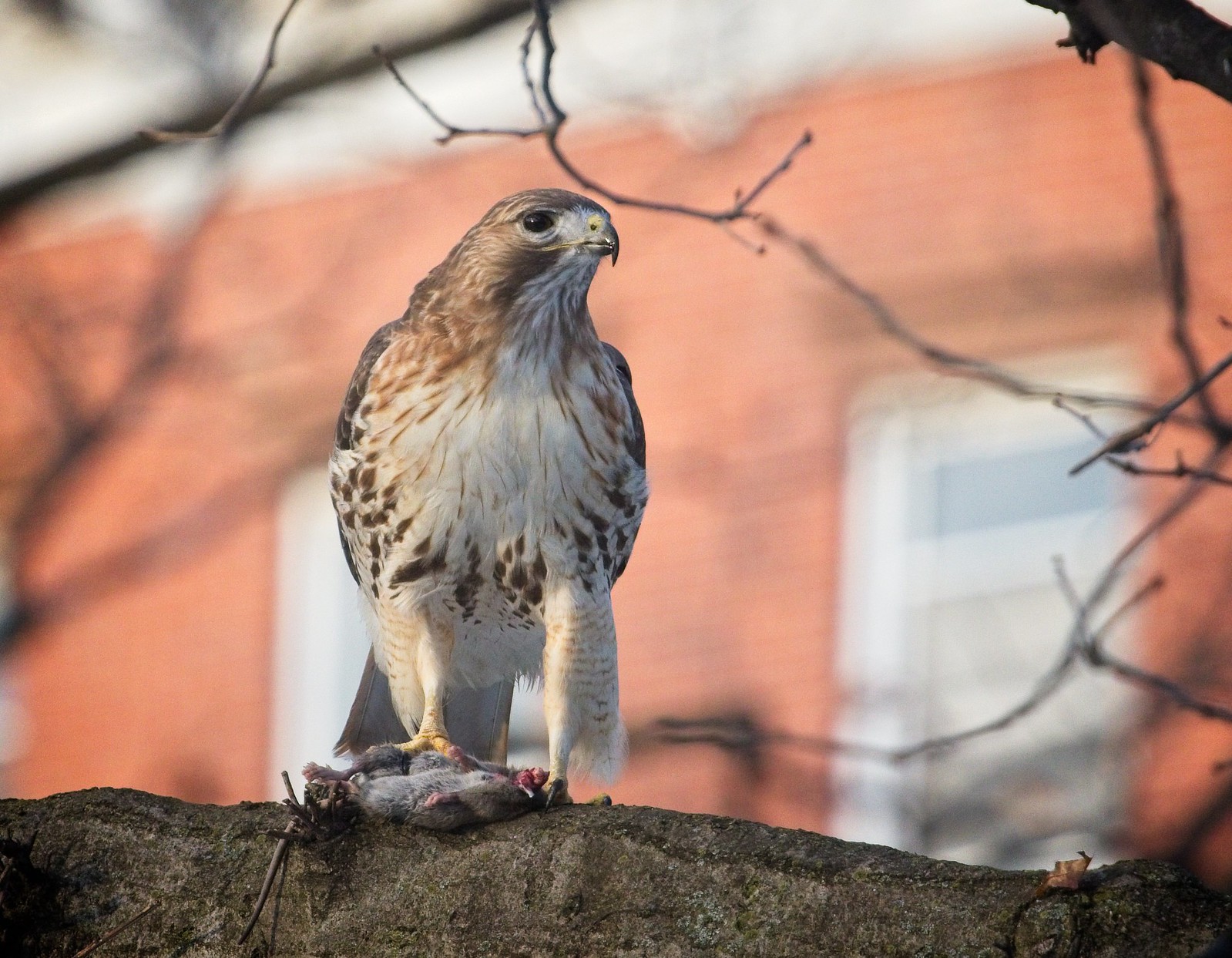 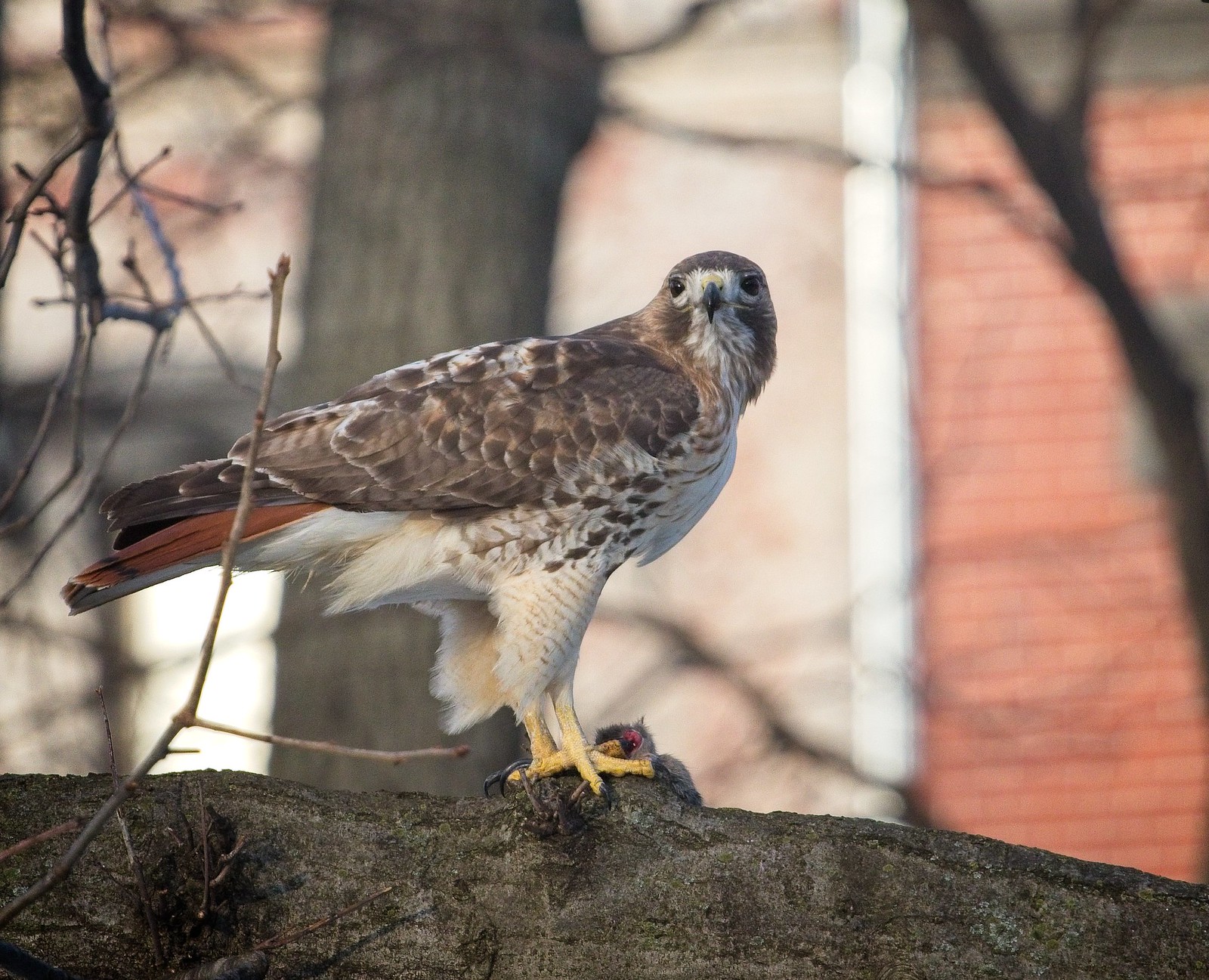 He's looking as good as ever. 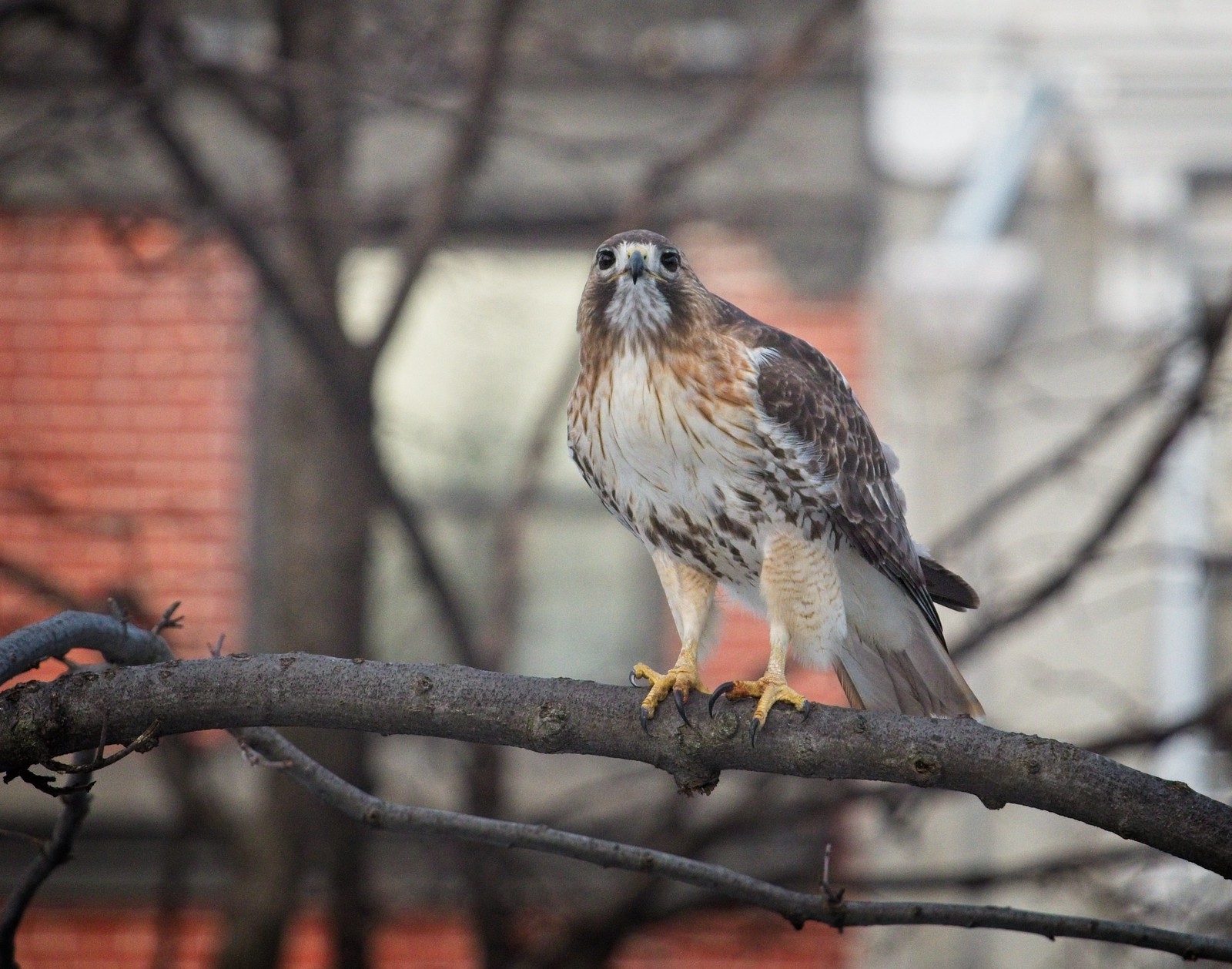 Done with dinner, he headed out. 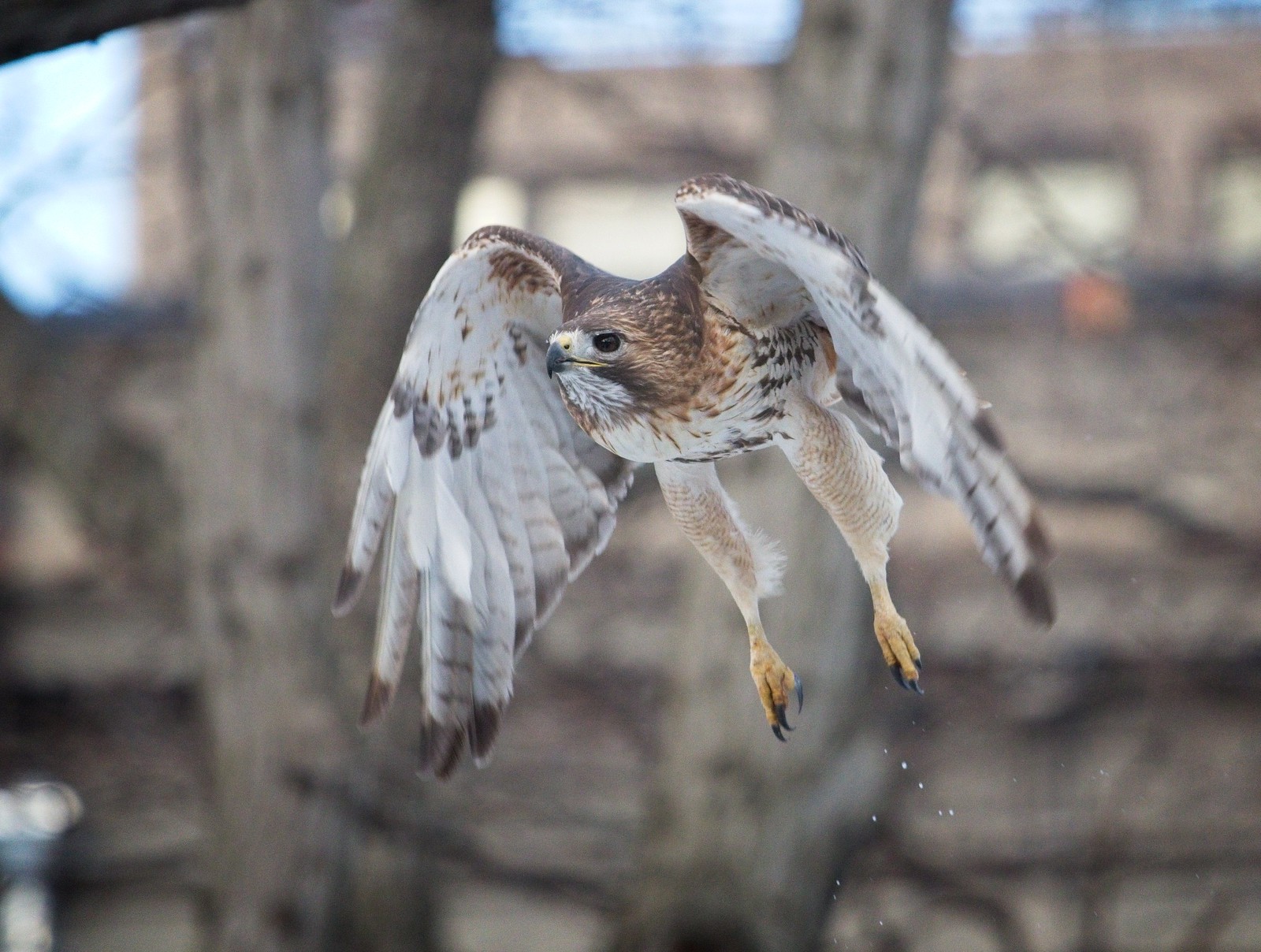 Back up on the Avenue A cross, Christo and Amelia met up for their regular end-of-day confab. 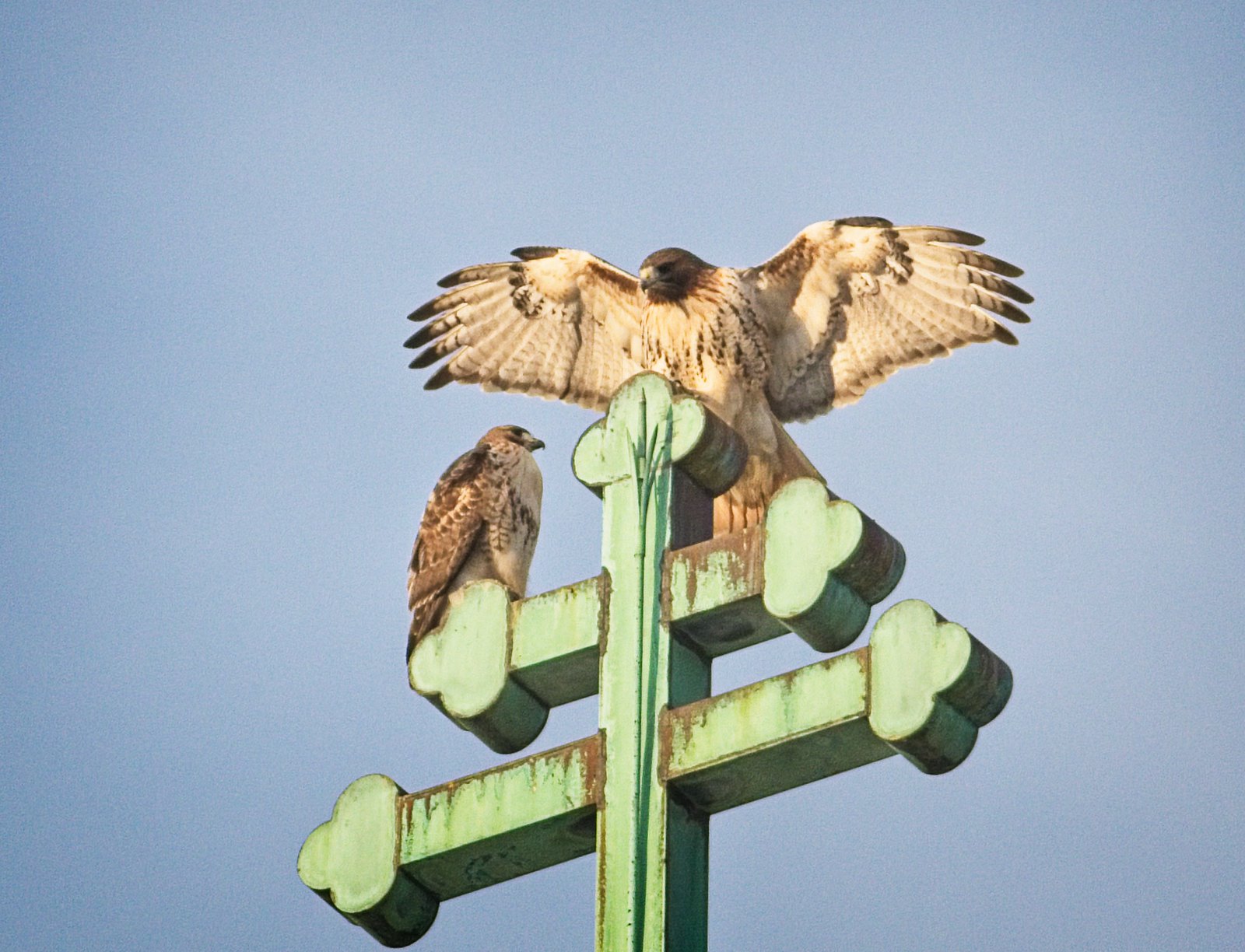 They were soon joined by a flock of Canada geese. 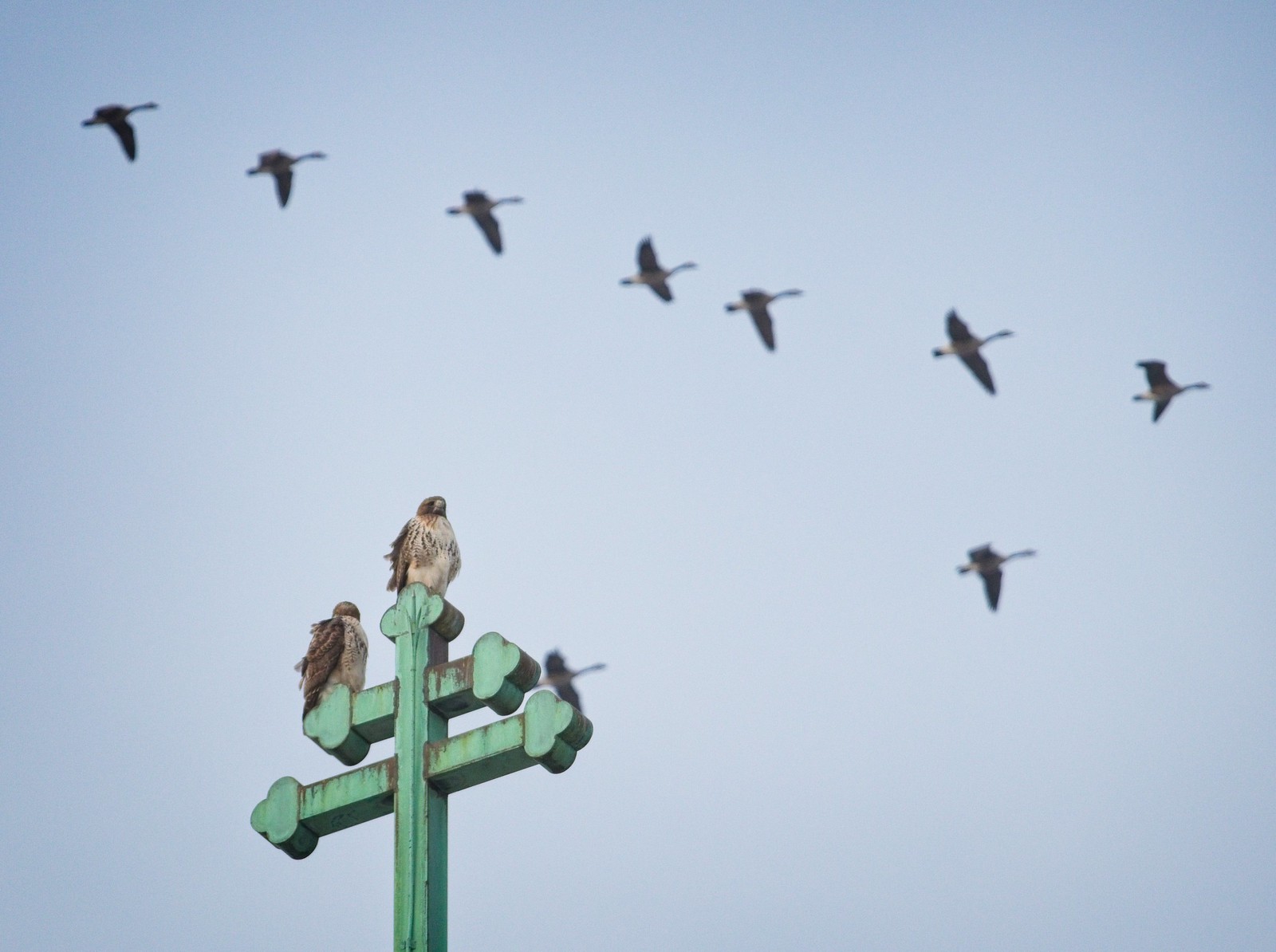 After Christo went off to roost, Amelia stayed and seemed preoccupied by something. I thought she was hunting pigeons, but the pigeons were already agitated and she seemed to be looking beyond them. 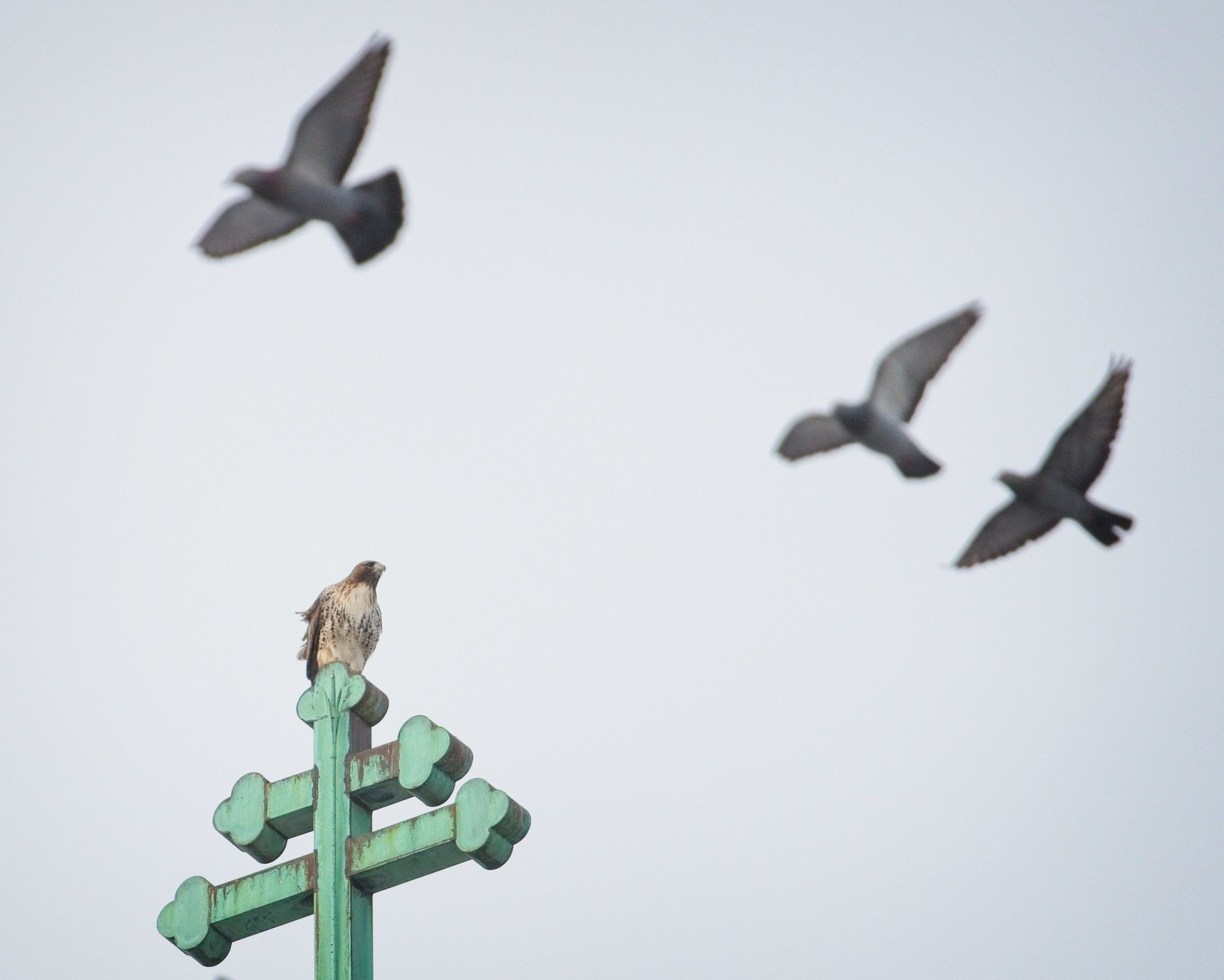 I missed it with the camera, but an immature red-tail swooped in and grabbed a pigeon right in front of Amelia! That is what she'd been watching and I couldn't believe she let it happen. The young hawk perched with its prize on a roof that was on the same block as the church.

If you look closely, you can see the gray tail feathers of the pigeon sticking out between the hawk's wing and tail. 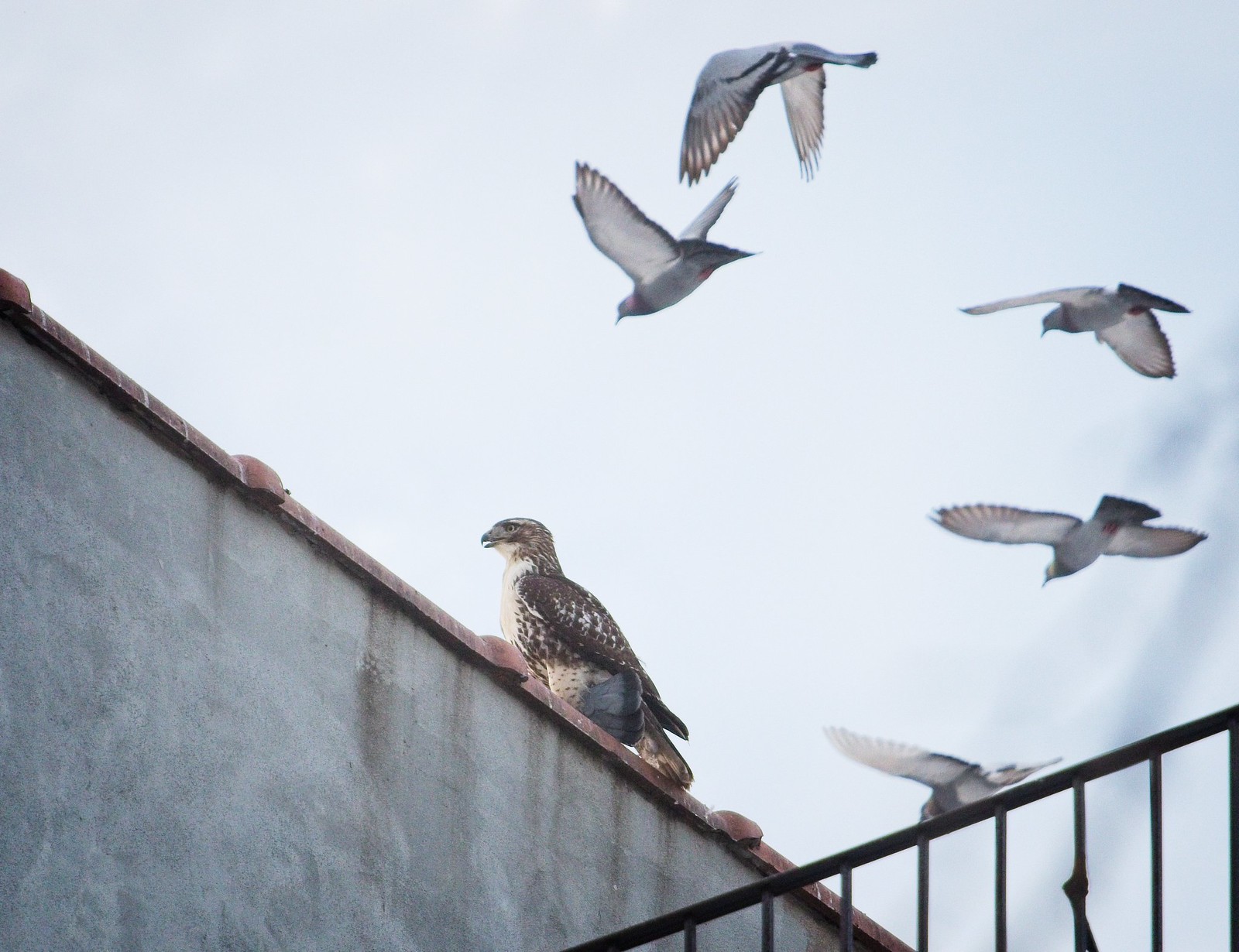 Amelia stayed on the cross screaming at the intruder, but it totally ignored her and sat there for about ten minutes before taking its meal to another building. I was surprised a fierce hawk like Amelia would allow an intruder to take food right in front of her, then hang around in her territory. Could this be one of her offspring? Unfortunately, I have no way of knowing, but it was interesting to note how Amelia never made a move on the young hawk. 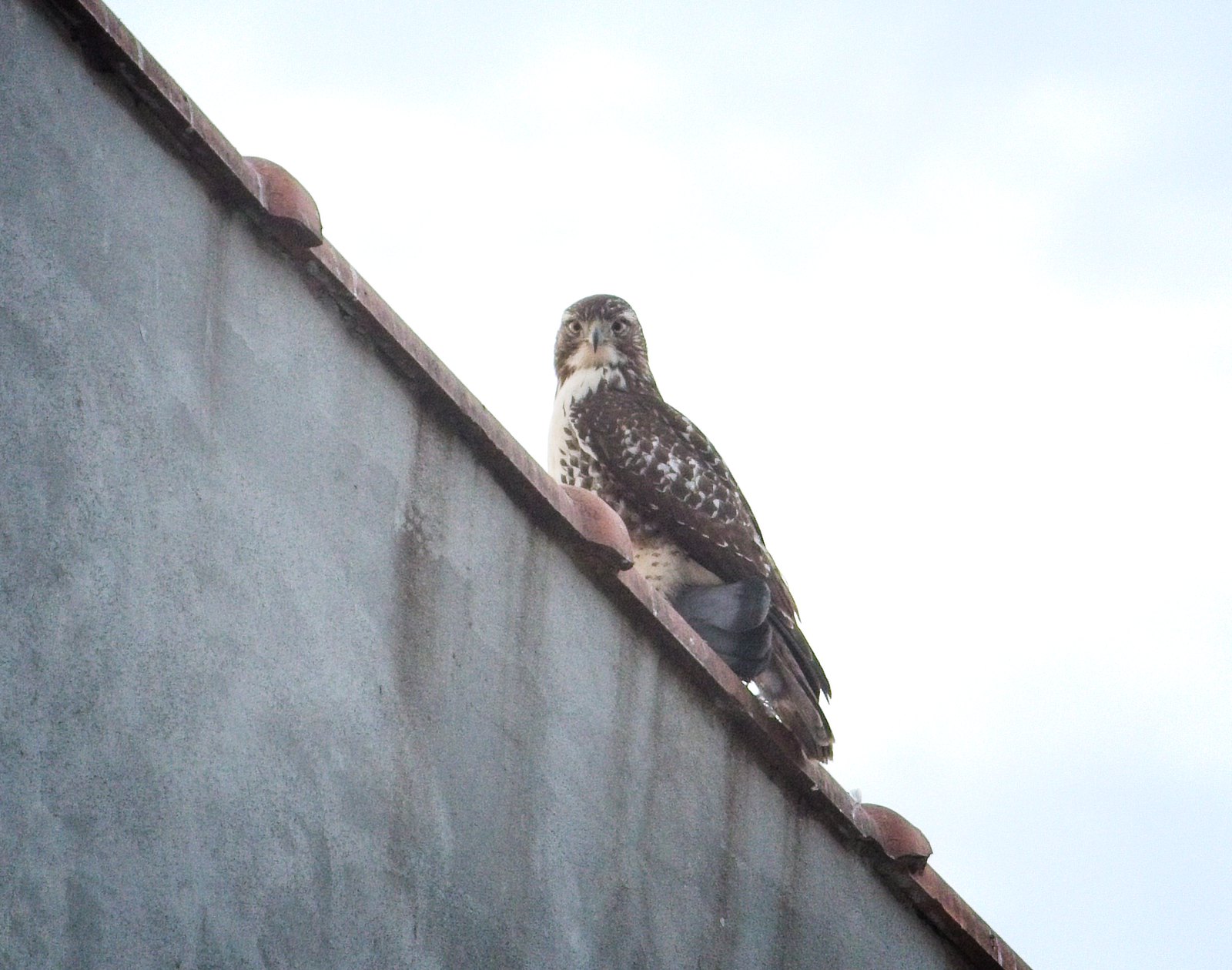 There have been reports of increased hawk activity in neighboring Washington and Union Square Parks, so they're definitely around, gearing up for nesting season which should start in January or February. We have this to look forward to in the new year.