Earlier in the month, I posted about two red-tailed hawks hanging around Chinatown.  Since then, I've spent a lot of time with them and thought I'd have some happy news to report.  Sadly, that's not the case.

It turns out this hawk pair had constructed a nest on the billboard at Canal & Chrystie, but it was disturbed, so they relocated to the Columbus Park area in Chinatown.  This park had been heavily baited with rat poison, so I've been extremely worried about the hawks, who were using the park for hunting.

This is the male with a mouse he caught in the park on March 18. 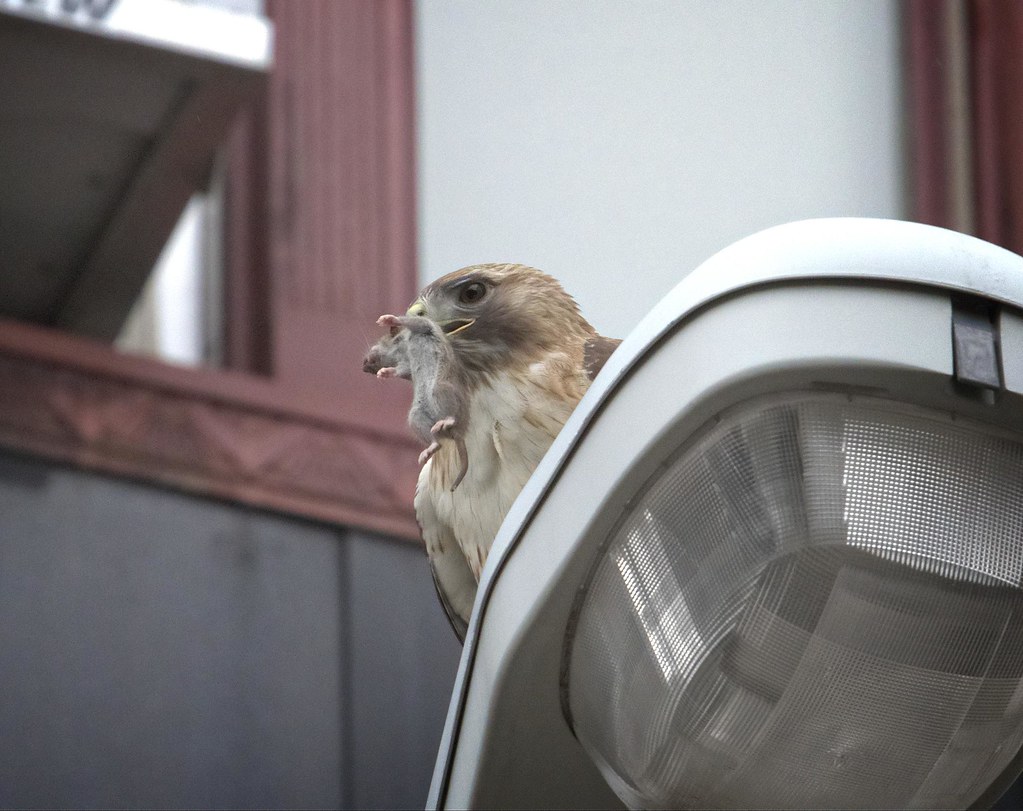 As it's mating/nesting season, the male has been doing a lot of hunting and feeding the female.  They've both been very busy gathering sticks from trees in Columbus and Collect Pond parks, and building a nest on an air-conditioner at the Heath Department. 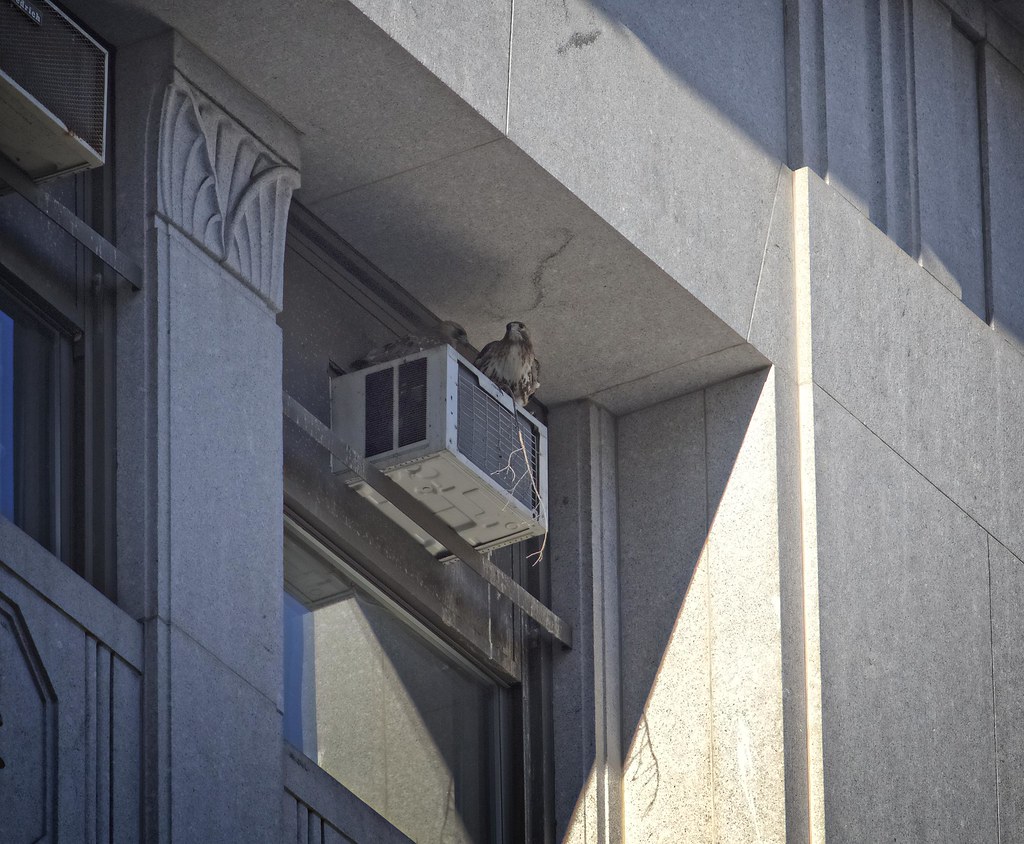 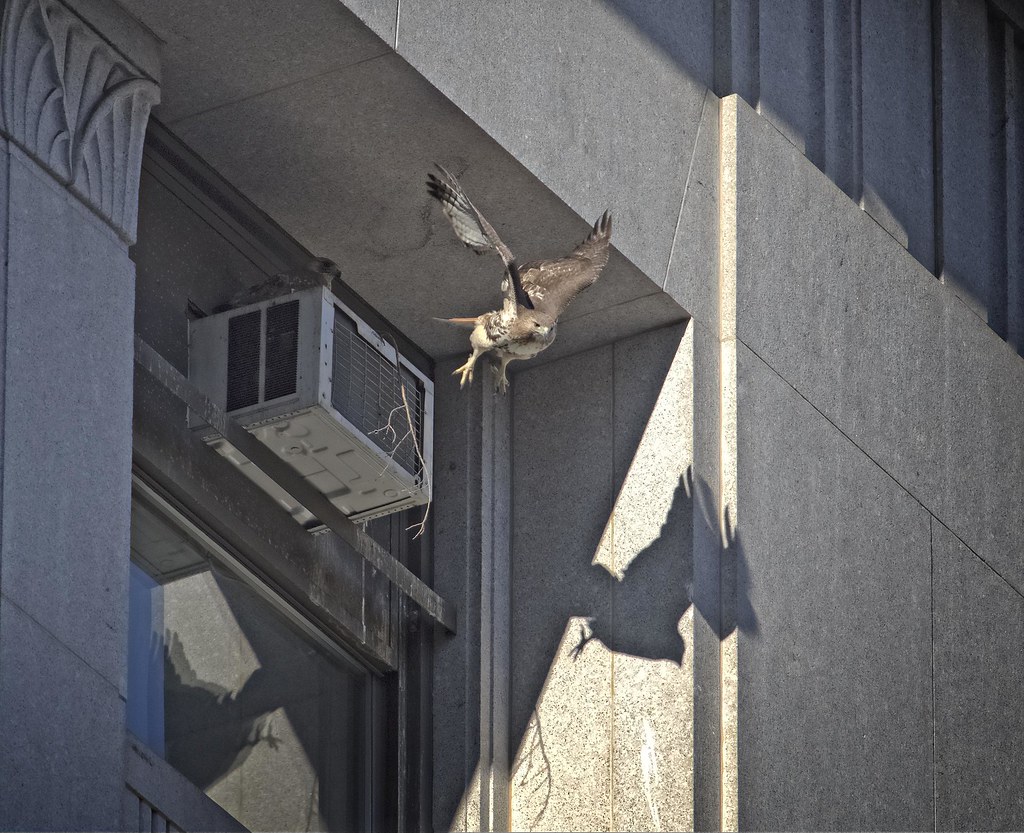 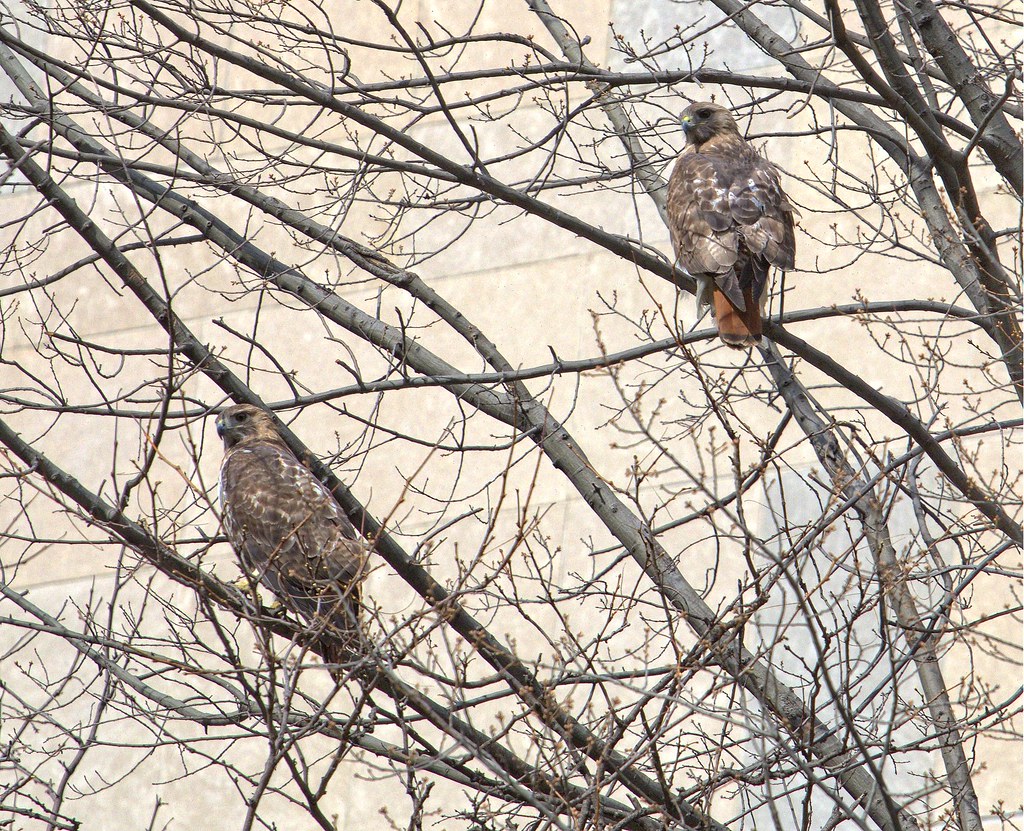 The hawks are well-known in the area and have been delighting people with their nest-building activities.  Since my last post, we've determined the hawk with the barred tail is the female (I'd misidentified her as the male in my post).  Judging by the fact that they each have light colored eyes and have been a bit disorganized with their nest-building, I am guessing they are very young and this is their first time going through this process.  A witness informed me that the female laid an egg on an air-conditioner earlier in the week, but there was no nest on that particular unit and the hawk didn't know what to do, so the egg was lost off the edge.

Around 1pm yesterday, I watched the female eat a pigeon in Collect Pond Park, but something wasn't quite right. 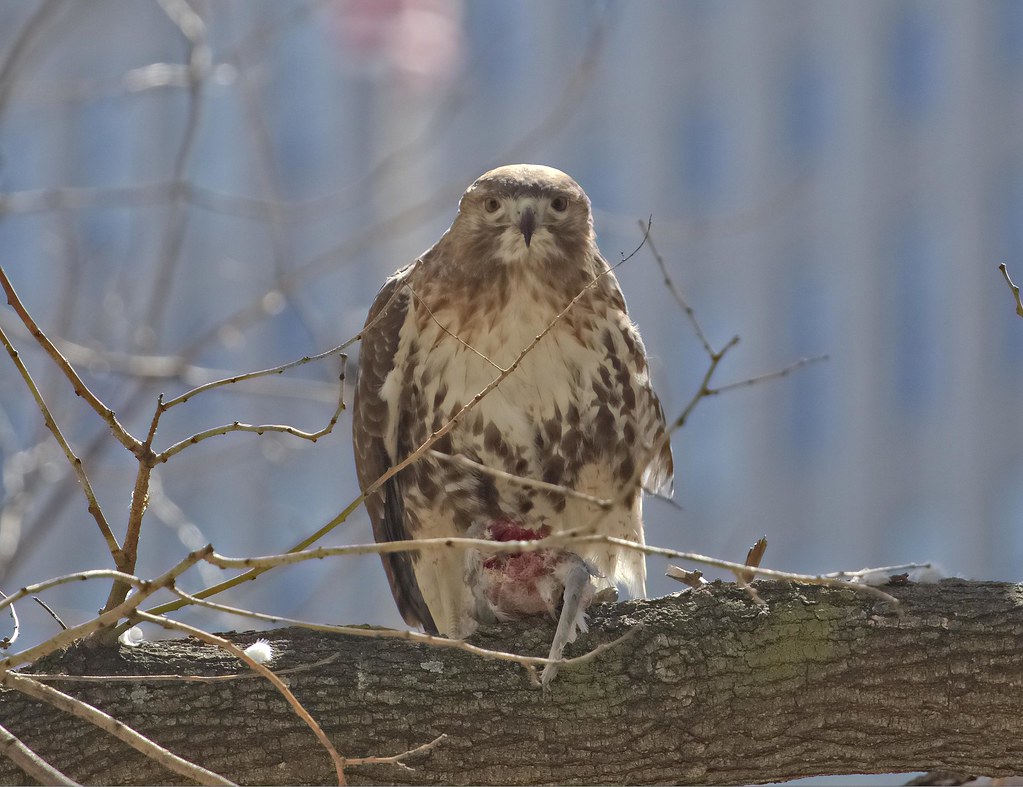 She was not very enthusiastic about eating.  Compared to her highly energetic behavior in the past, this seemed odd.

Here is some video of her eating.  She's really not into it:

I had to leave the park for a while, but a fellow hawk-watcher told me that after eating, the hawk perched low in a tree and spent most of the afternoon with her eyes closed.  This is not normal behavior.  When I returned to the park around 5:30pm, this is how she looked: 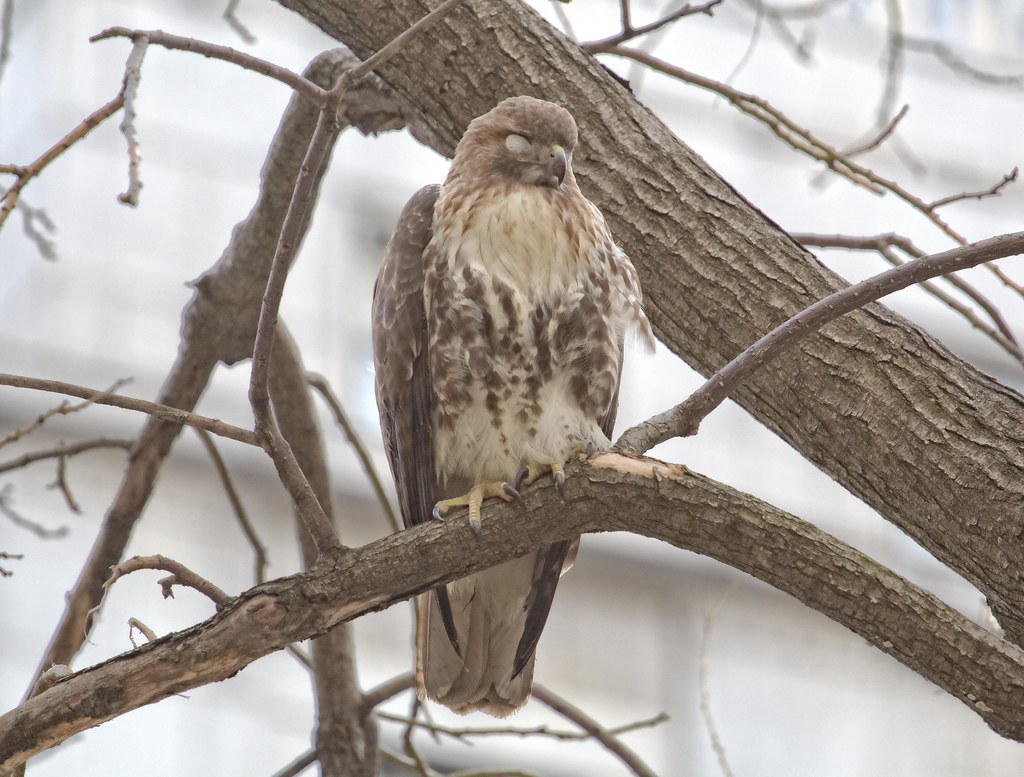 Her beak still had blood on it from lunch, so she apparently did not finish cleaning her face.  At one point, a squirrel got very close to her, but she didn't react. 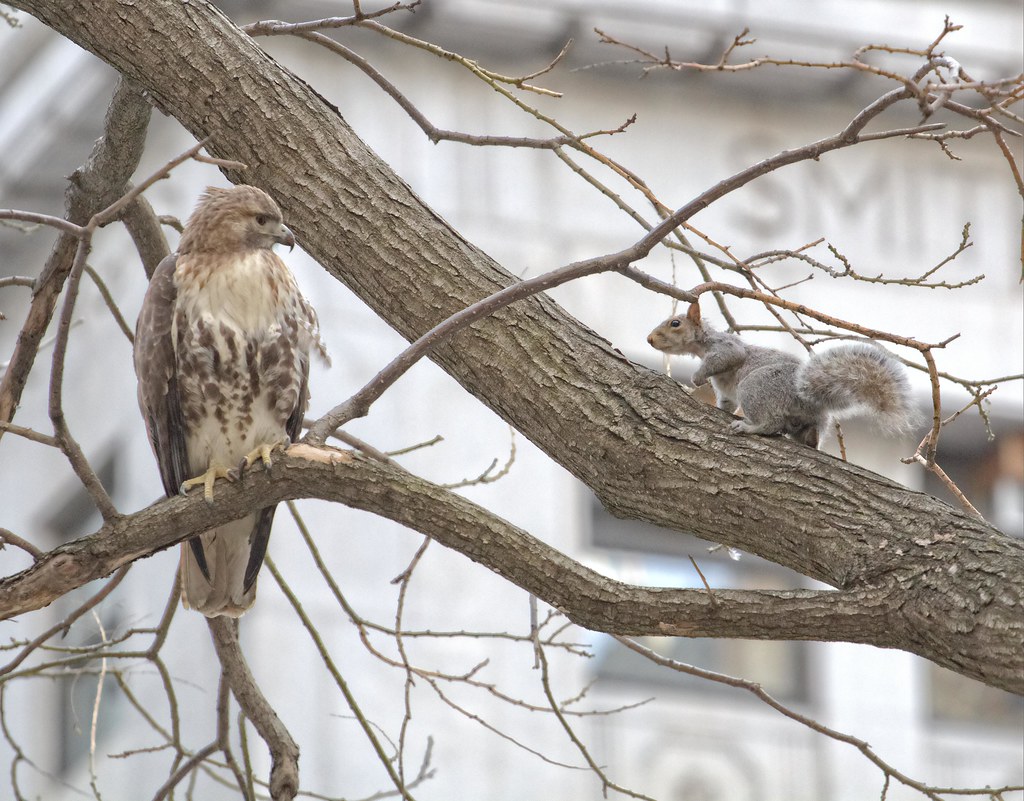 Although she adjusted her position a little bit, the hawk did not move from the tree all evening.  When she climbed higher to roost, she wobbled and looked very weak.  We had to leave her at 8pm as it was dark. 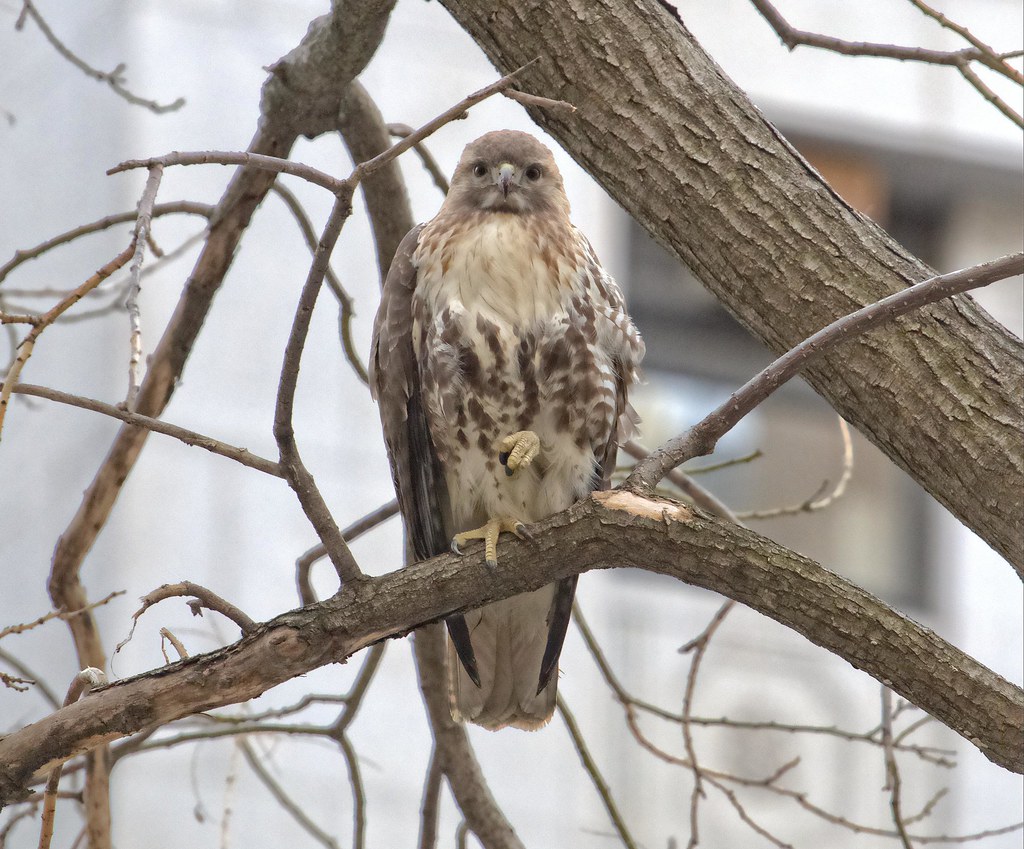 I hoped some rest would do her good, but the sense of dread overcame me when I returned to the park to check on her this morning.  My worst fear was realized when I saw her still in the tree, and she had obviously passed away. 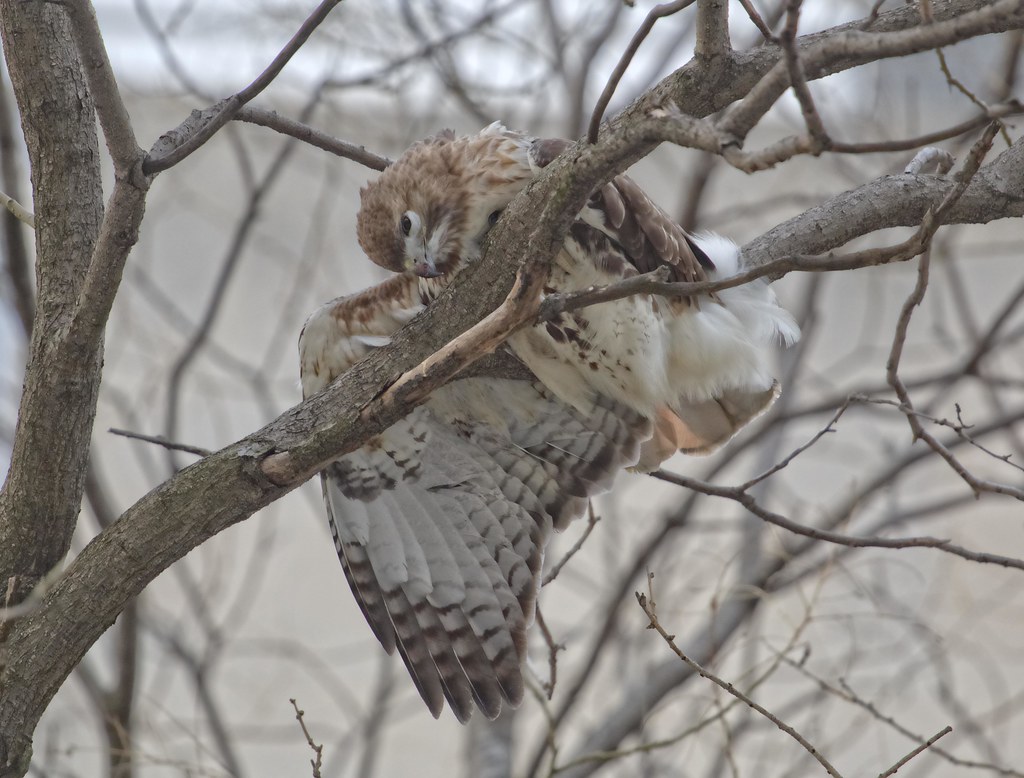 She is being held on the branch by her talons.

As I looked on in horror, other people came by and were equally horrified.  Many had been watching the hawks for several weeks and were devastated to see the dead hawk in the tree.  It was hard to explain to people what had happened without tearing up.  How could this happen?!  She was so alive an energetic just days before!  Even a cop had tears in his eyes as he snapped a pic with his phone.

As if this wasn't terrible enough, the male hawk kept visiting his mate in the tree and seemed utterly confused. 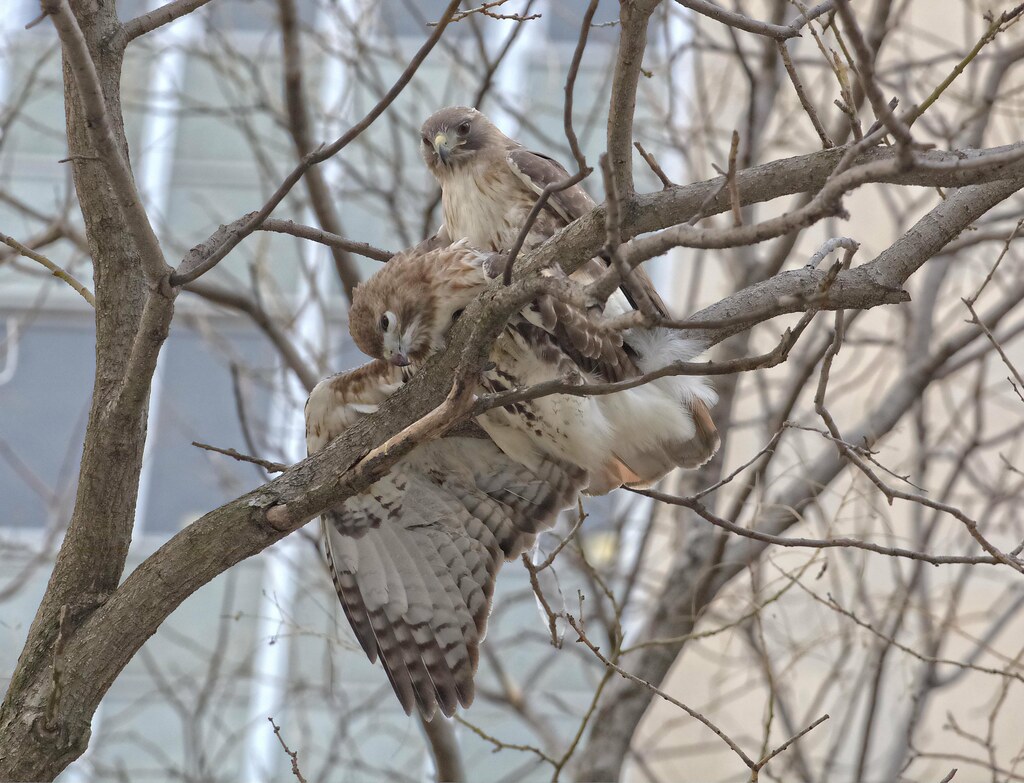 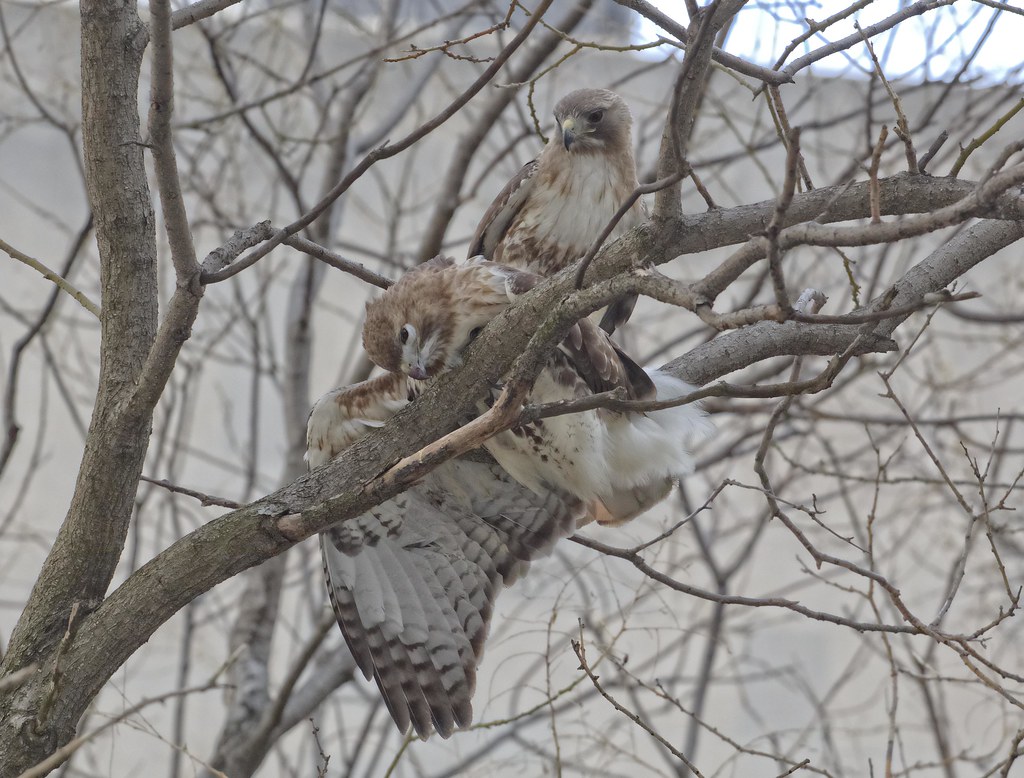 He tried to rouse her by pulling at her feathers. 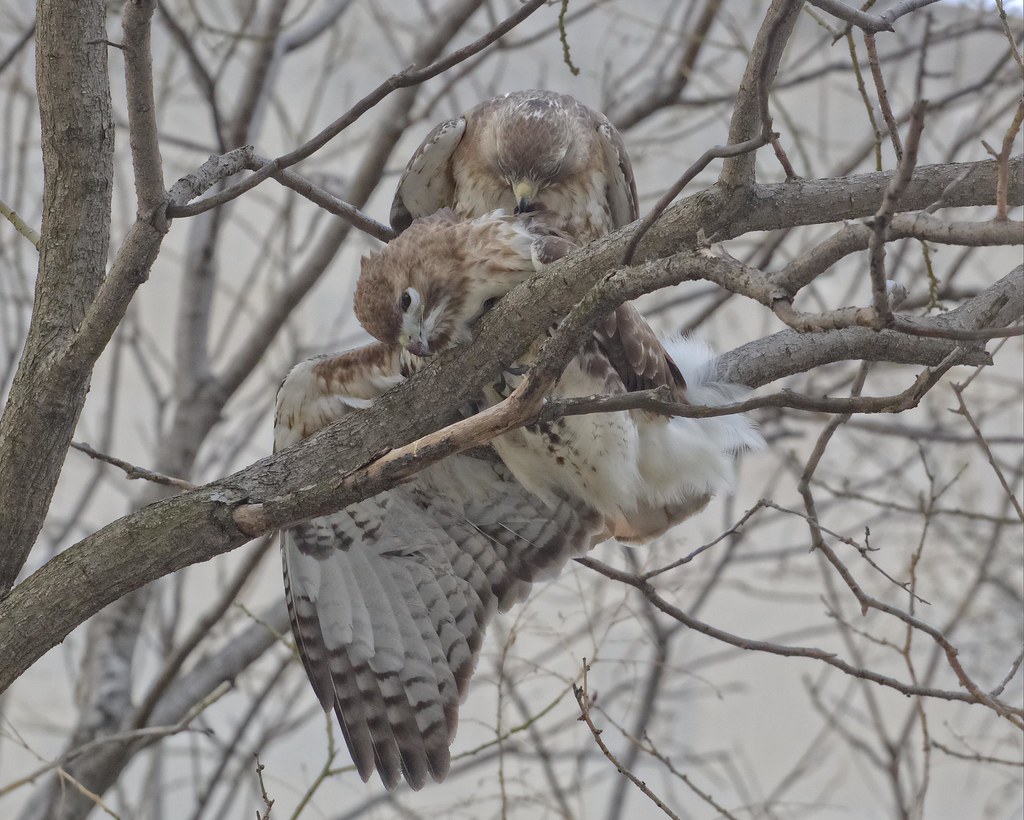 Most heart-wrenching of all, he brought nesting sticks to her. 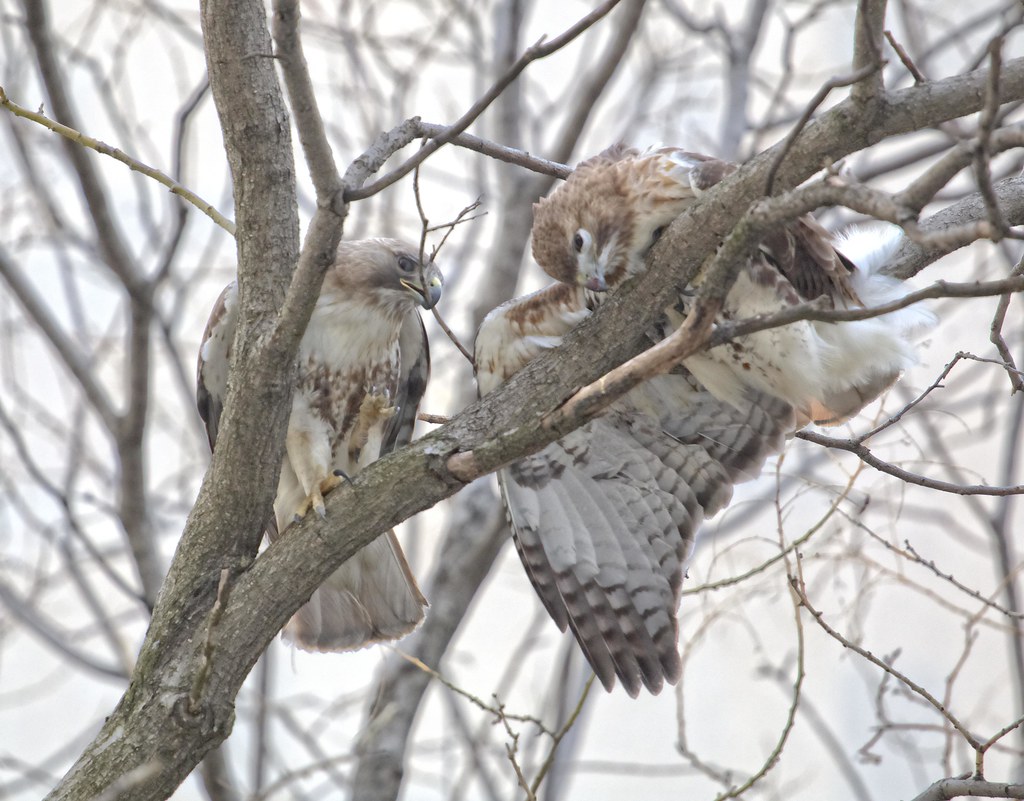 This really struck me - the hawks deal with death on a daily basis, yet this male hawk seemed not to recognize it in his mate.

Here is some video of them together: 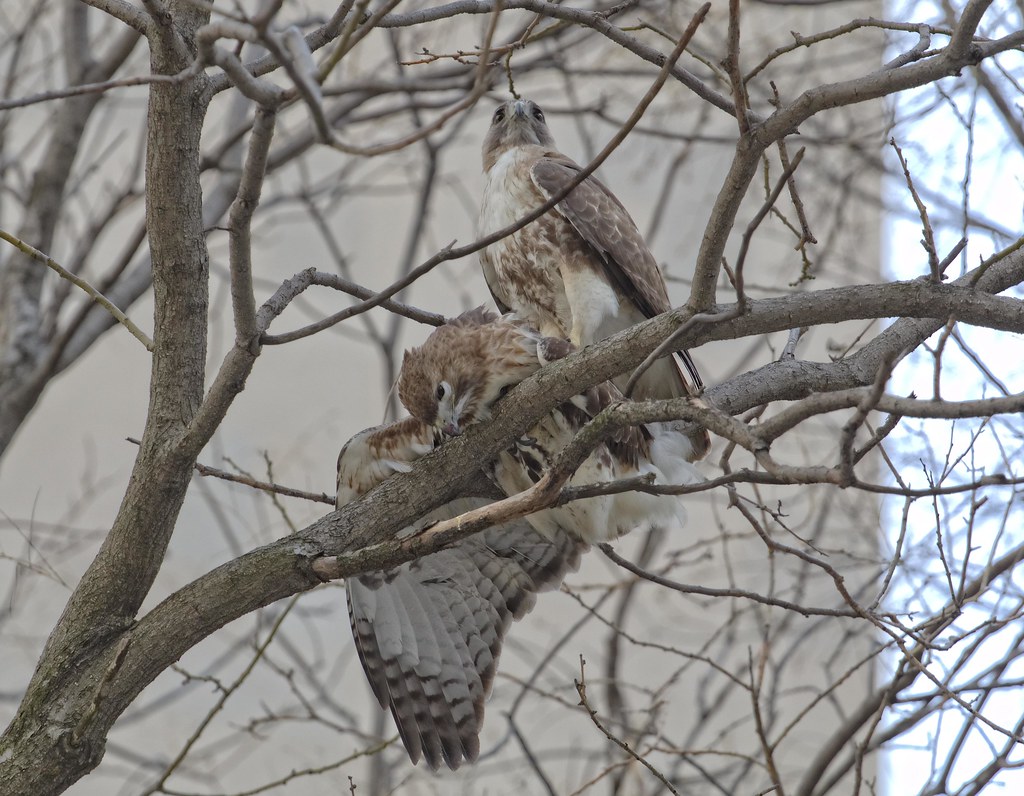 The Parks Department eventually came and removed the hawk from the tree.  A necropsy will be performed and I'll update if/when I know the results.

It seems obvious to me, though, that she was killed by rodenticide.  There are notices about rat poison posted all over Columbus Park and, despite the hawks nesting and hunting in the parks, more poison was put out just a few days ago.  I try to refrain from expressing anger on this blog, but this absolutely infuriates me.  Rat poison is a lazy and irresponsible way to deal with a problem.  Here we have the natural rat predators showing up and we kill them. There are other ways of dealing with rats, such as using snap traps like they do in Washington Square Park.  Tompkins Square has taken some measures like putting down mesh under the ground cover to block rat holes, and using rat-proof trash compactors.  But the only real way to control the rats is for people to be educated and change their behavior - feeding pigeons, littering, not properly disposing of food, etc.  Poison gets into the ground and water, not to mention it kills squirrels and any other animal that gets into it.  One of Pale Male's kids died last summer after eating a poisoned rat.

As I've spent so much time with these hawks, I have a huge collection of photos of them in happier times. I'll be posting more of those here going forward.  In the mean time, here is a shot of the female hawk working on her nest on March 18. 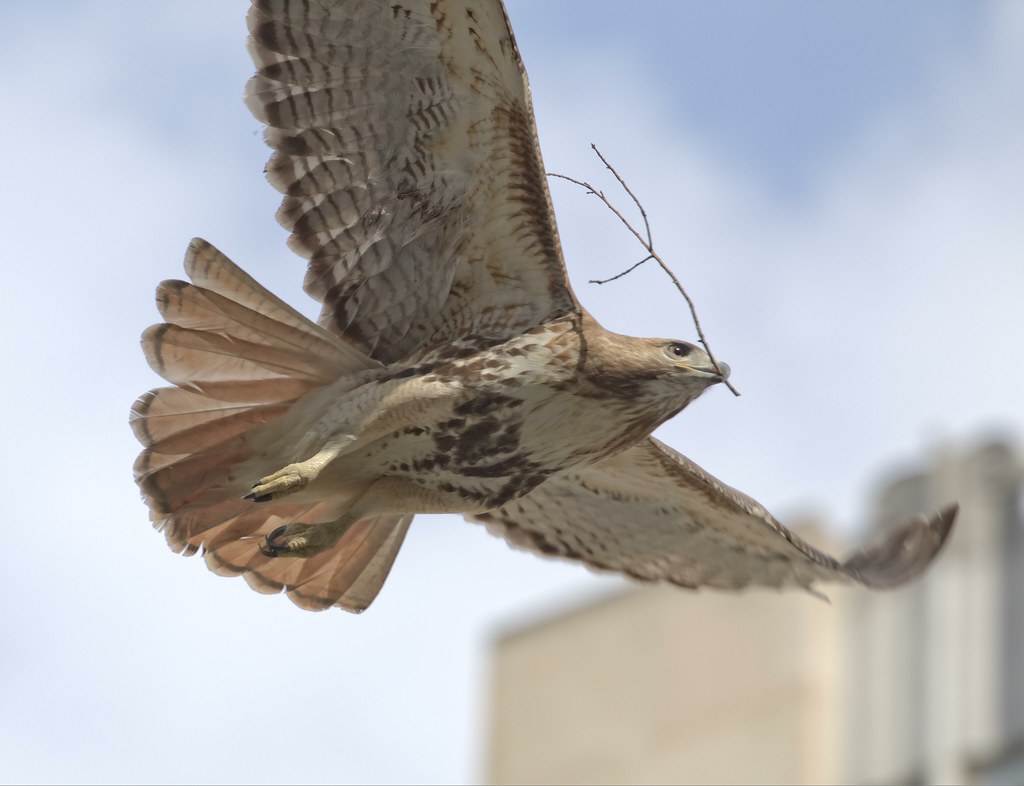