The big news is it looks like Dora spent the night in the nest on Sunday (March 13), so we are on egg watch.

Late that afternoon, both hawks fussed with the nest.  In the photo below, you can barely make out Dora's back in the nest as Christo perches to the right. 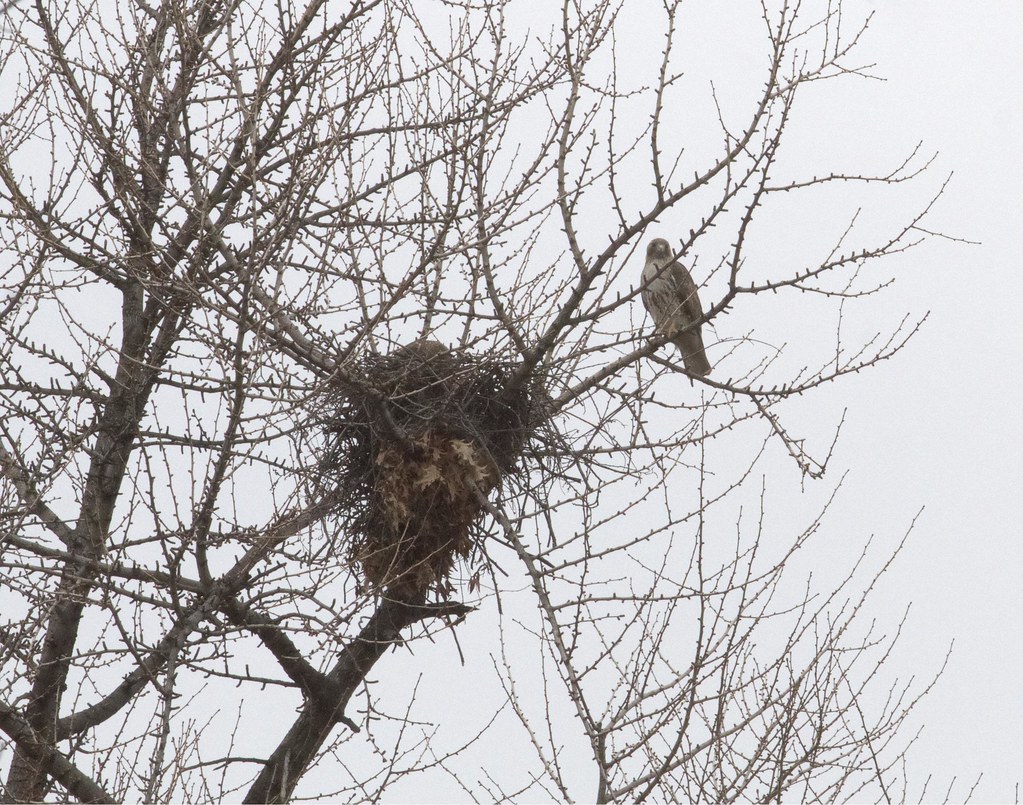 Dora perched in the honey locust near Avenue B & 9th Street for a few minutes before flying to the nest in the ginkgo tree around 4pm. 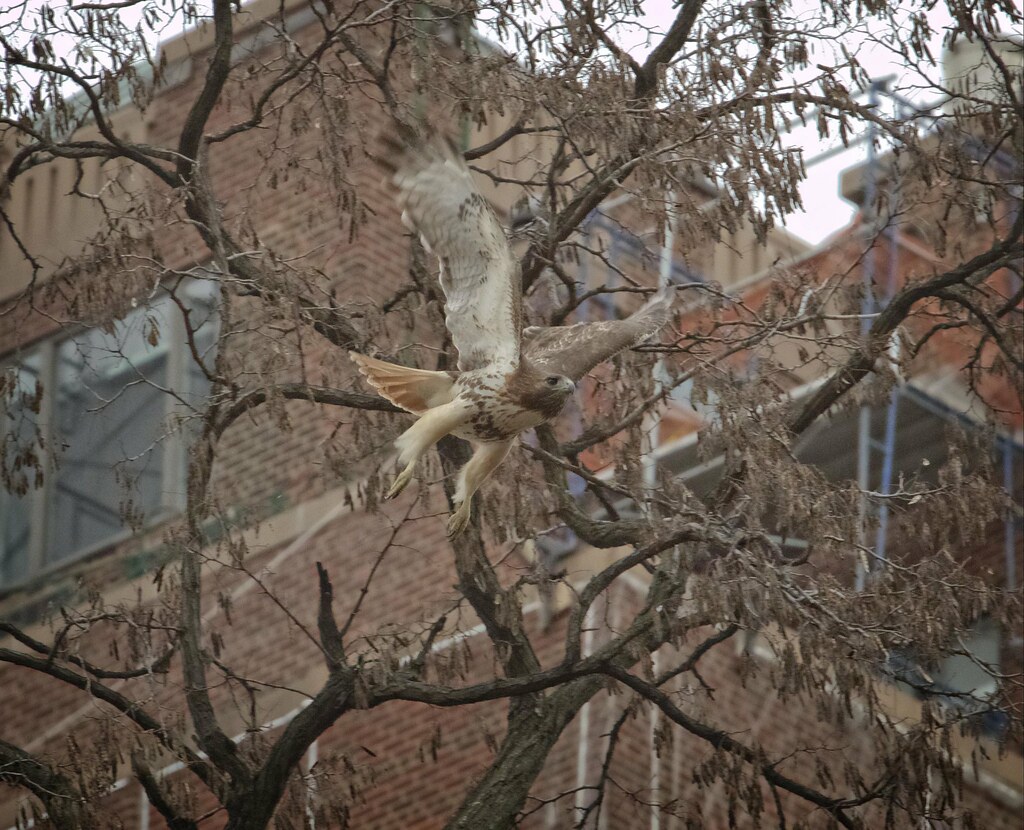 I stayed and watched her for another 3.5 hours and she did not come out of the nest.  By the time I left, it was dark.  You can just see her head poking out from the nest in the photo below. 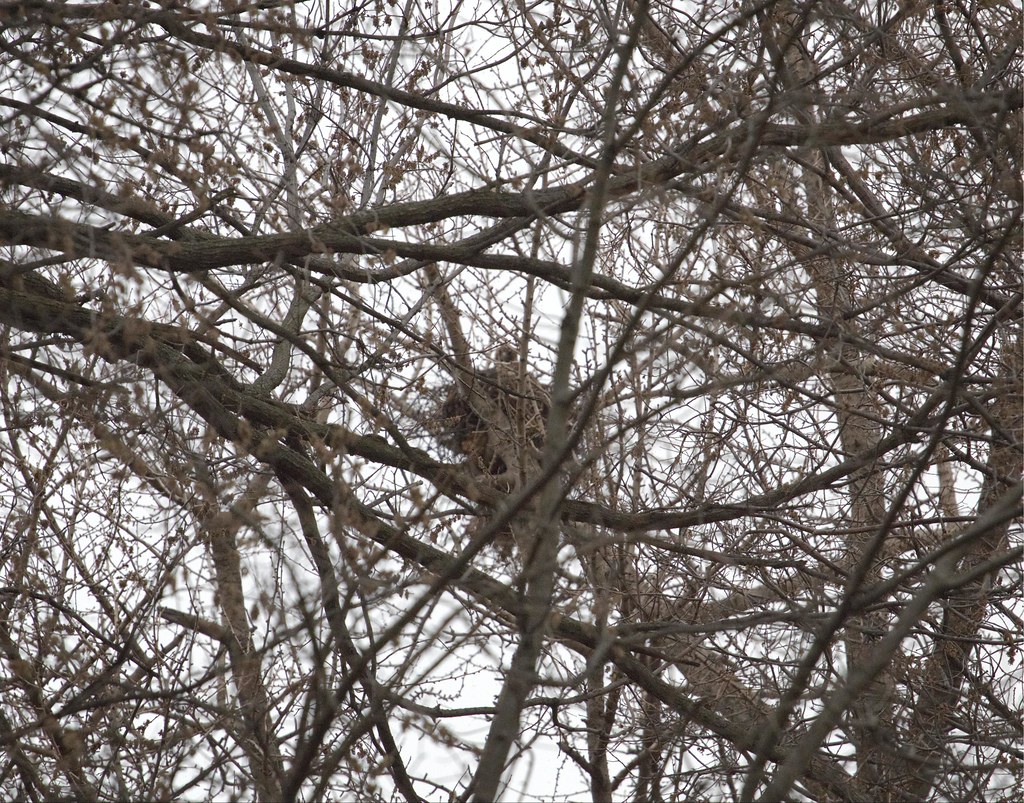 Does Dora have an egg?  I don't know, but I'm willing to bet that if there isn't already an egg in there, there will be eggs laid this week.

Last year, we think Dora laid the first of three eggs on or around March 23.  The year before that, she laid her first egg between March 29-31.  This year, the hawks got a much earlier start working on their nest.  If eggs are laid this week, we can expect hatching in 36-40 days, which would be the end of April.

This season, we do not have the luxury of a nest cam to show us what's happening up there, but I'm happy the hawks are nesting in a tree.  The nest cams gave us invaluable information about the hawks and, for that, I'm grateful.  I'm especially thankful for the residents who sacrificed their air-conditioners and allowed us all to share the up-close nesting experience.  I became accustomed to seeing Dora every day, and really enjoyed watching her (and Christo) raise the babies.  This time around, they will have their privacy, so we will just have to wait and be surprised when we're able to catch a glimpse of the kids.

One advantage of this tree nest will be that the babies will be able to use the branches and get room to explore and stretch their wings before fledging.  This was something they could not do on the previous air-conditioner nests.

Speaking of stretching, Dora has been doing some pre-nesting yoga moves over the last several days. 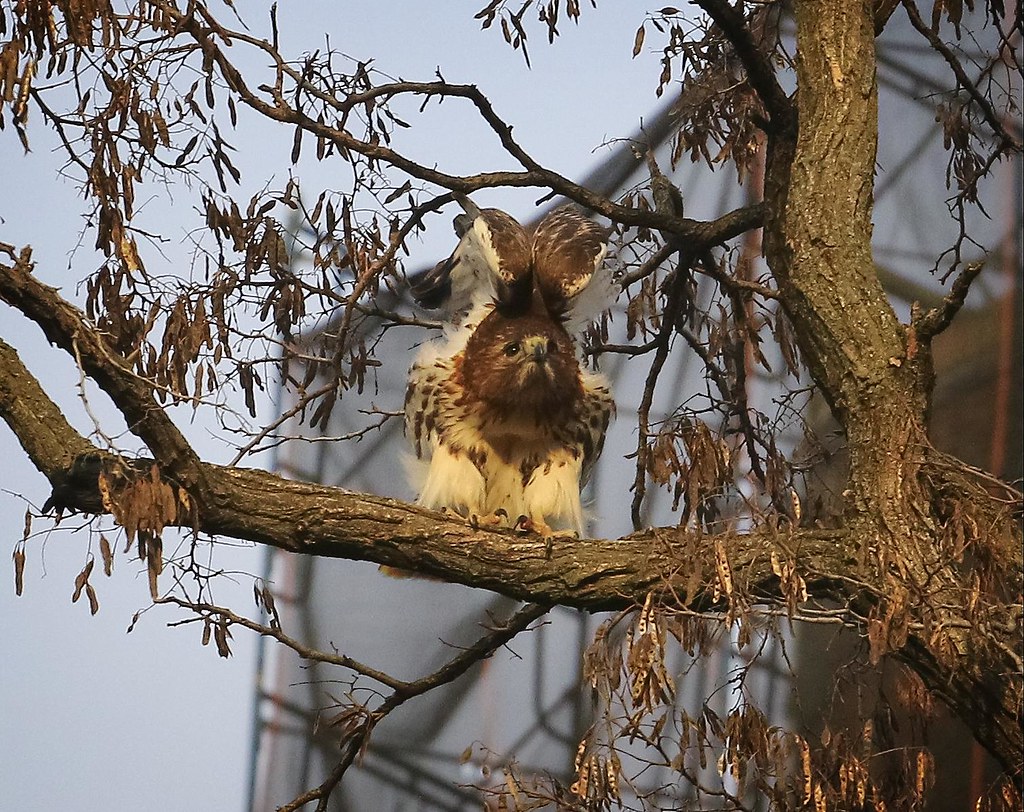 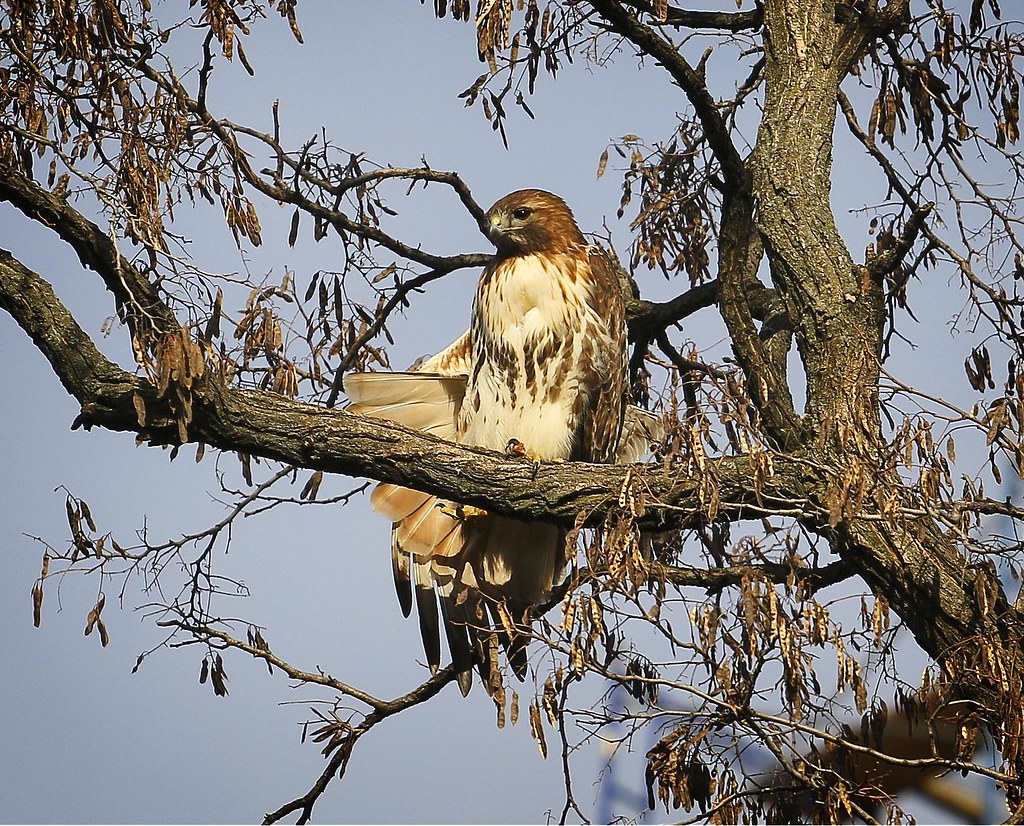 See how she perches on one foot while extending the other leg down below the branch. 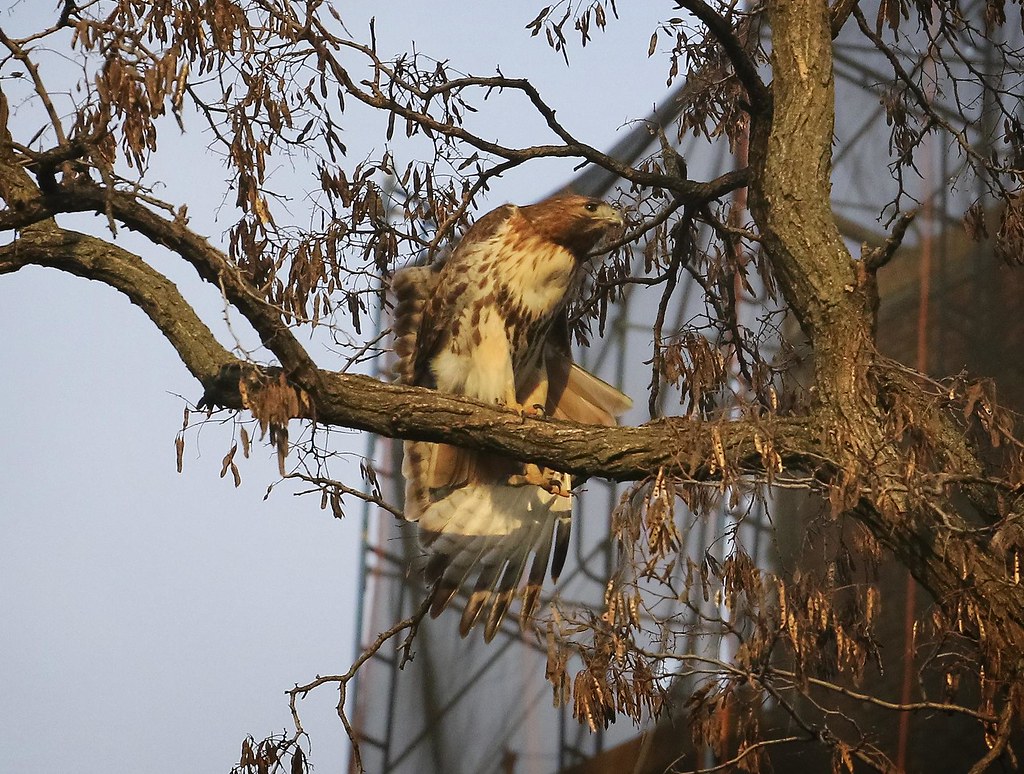 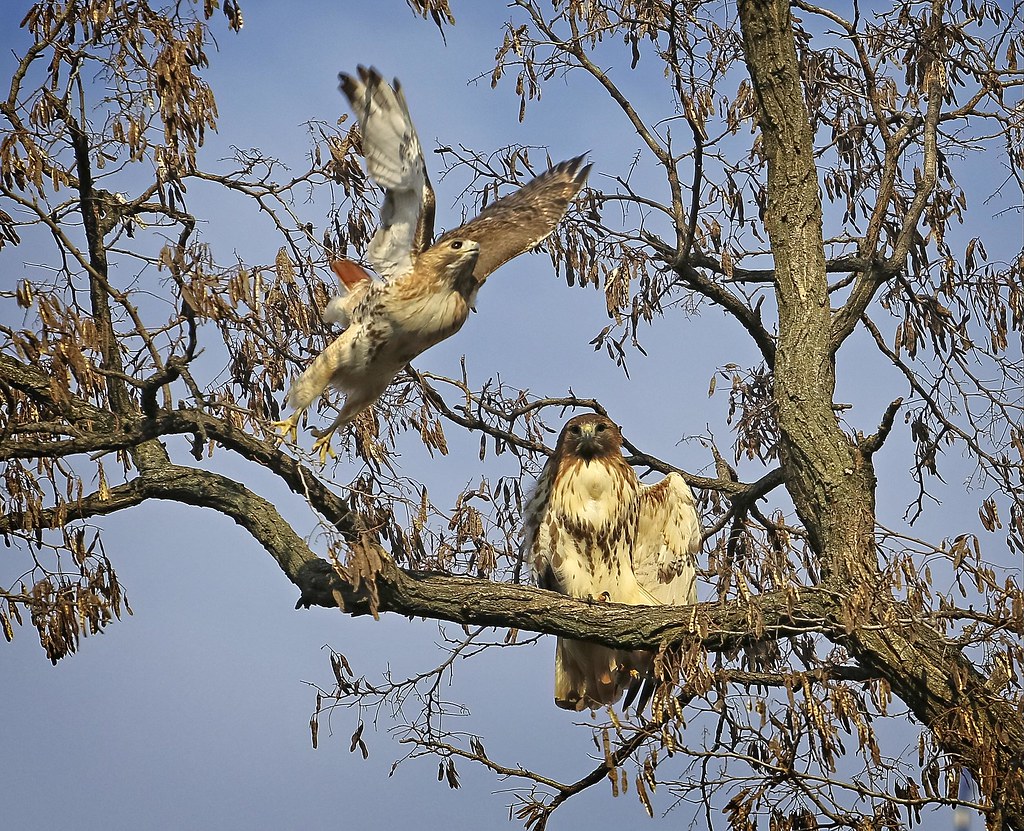 These hawks have to stretch after all their sexy exercise! 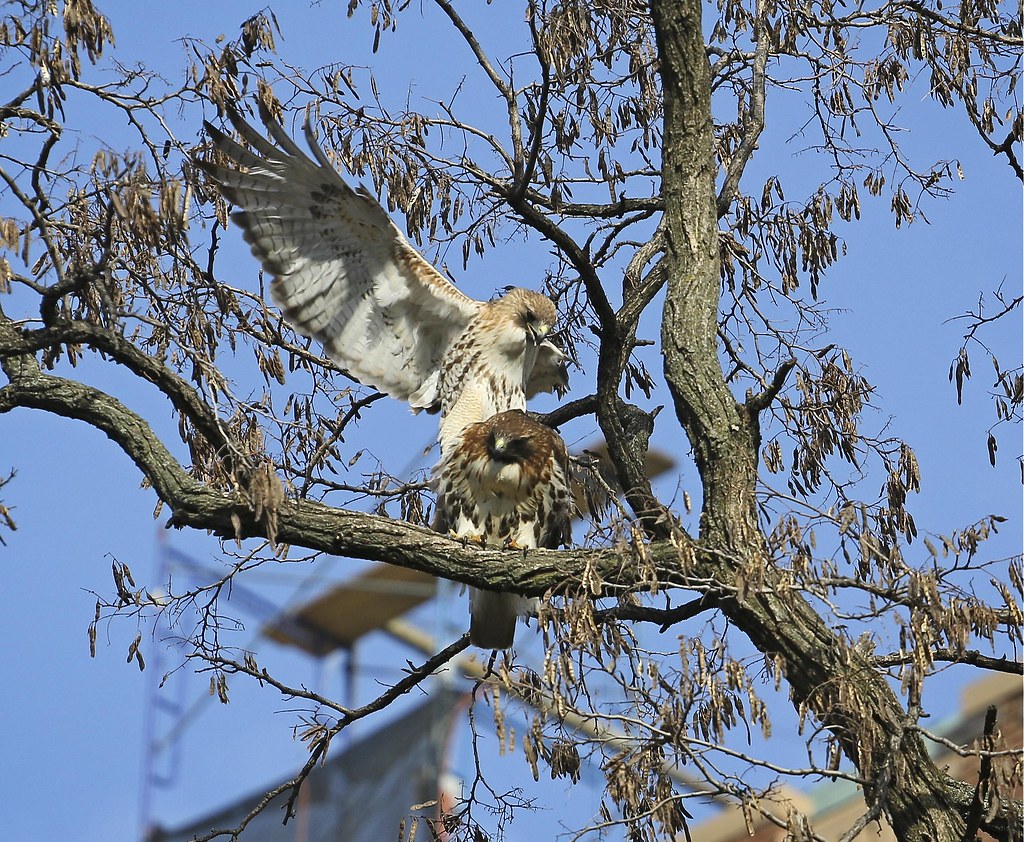 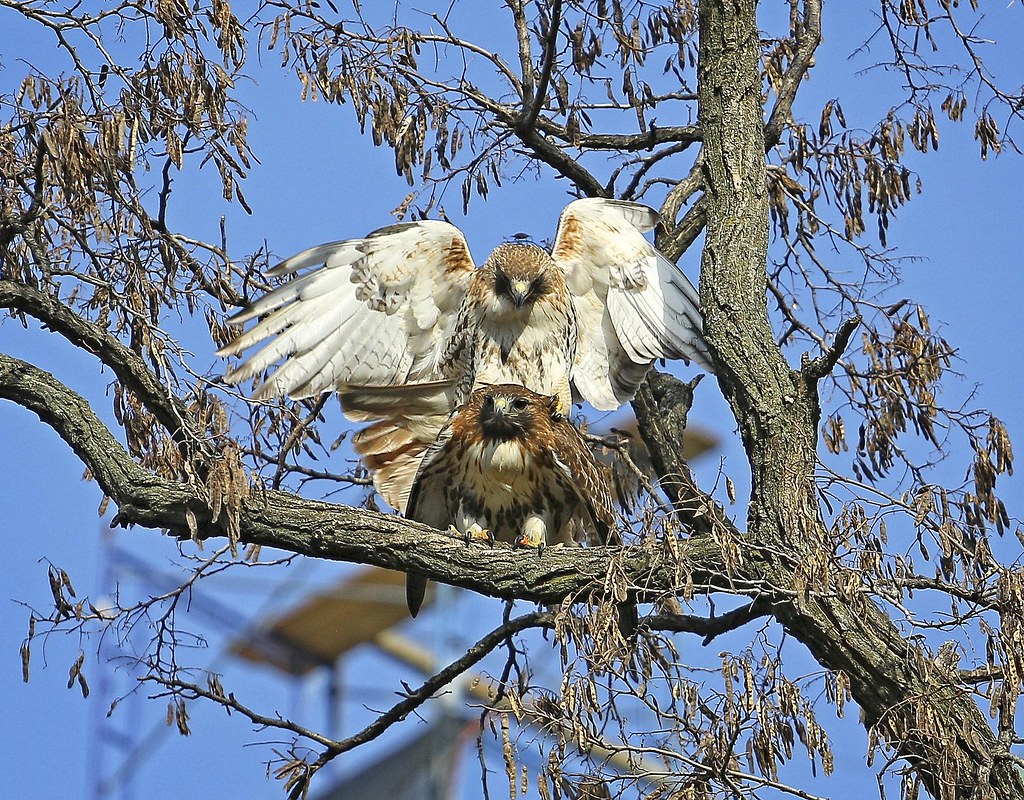 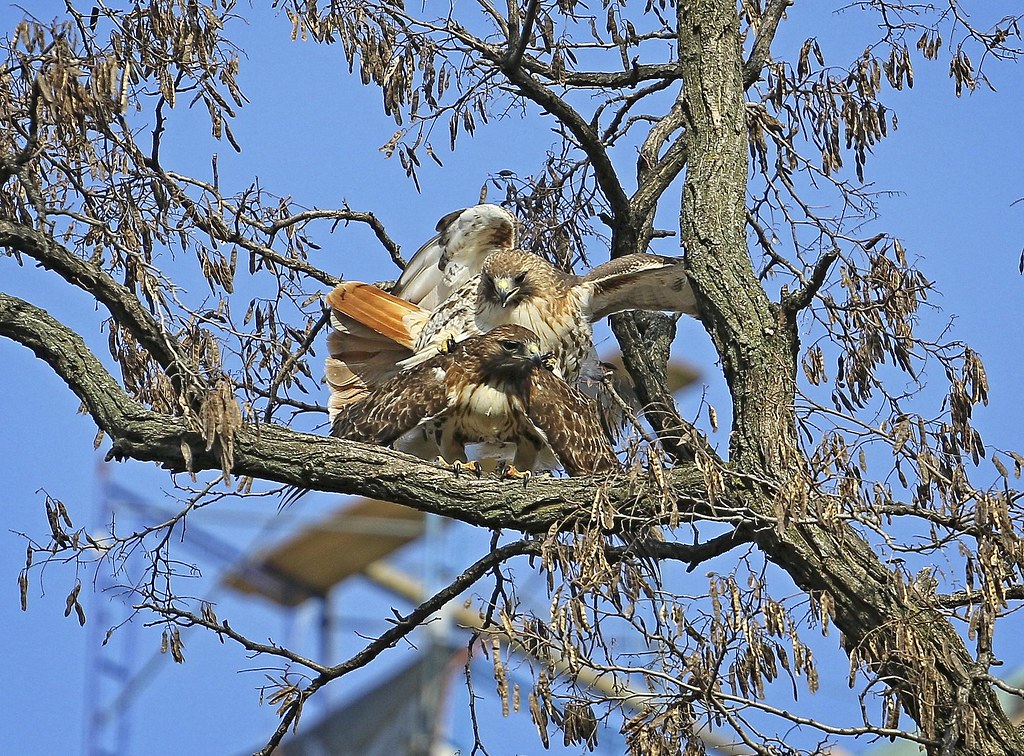 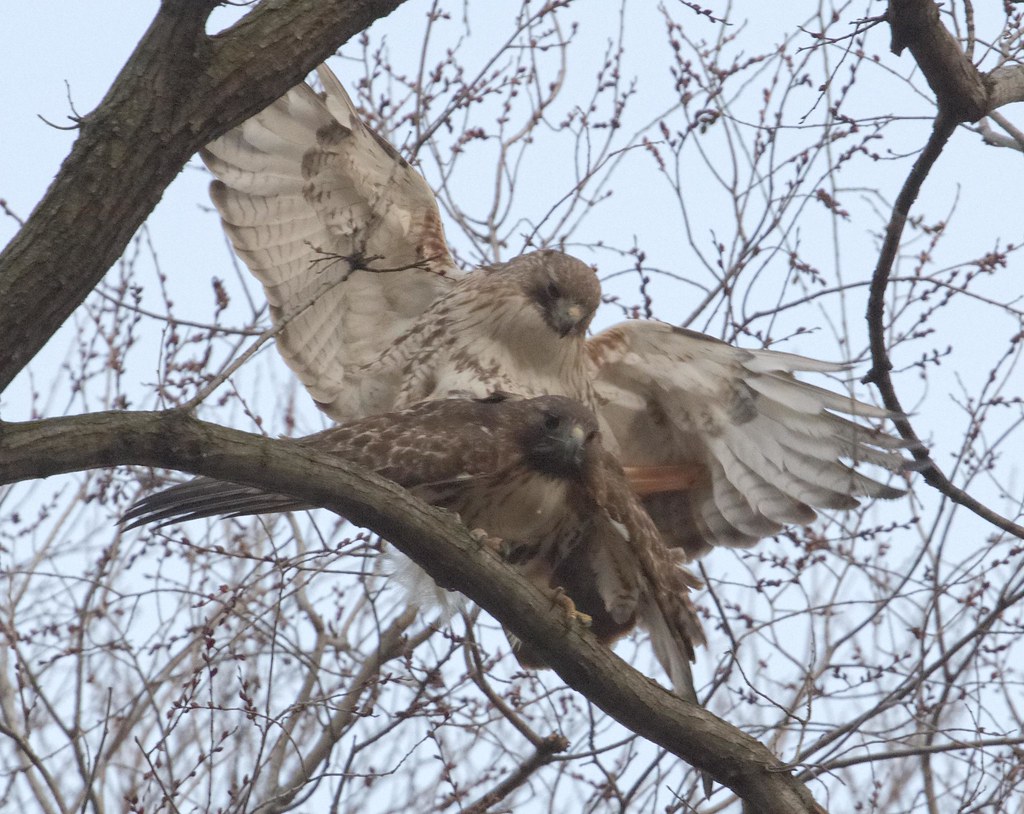 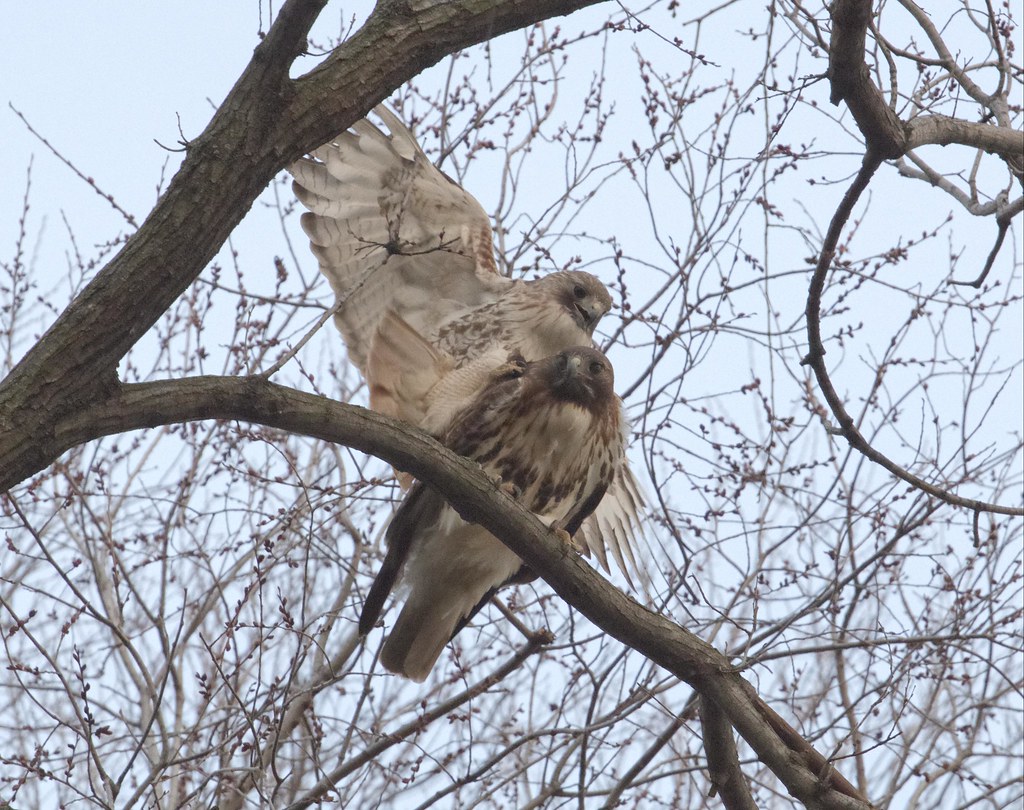 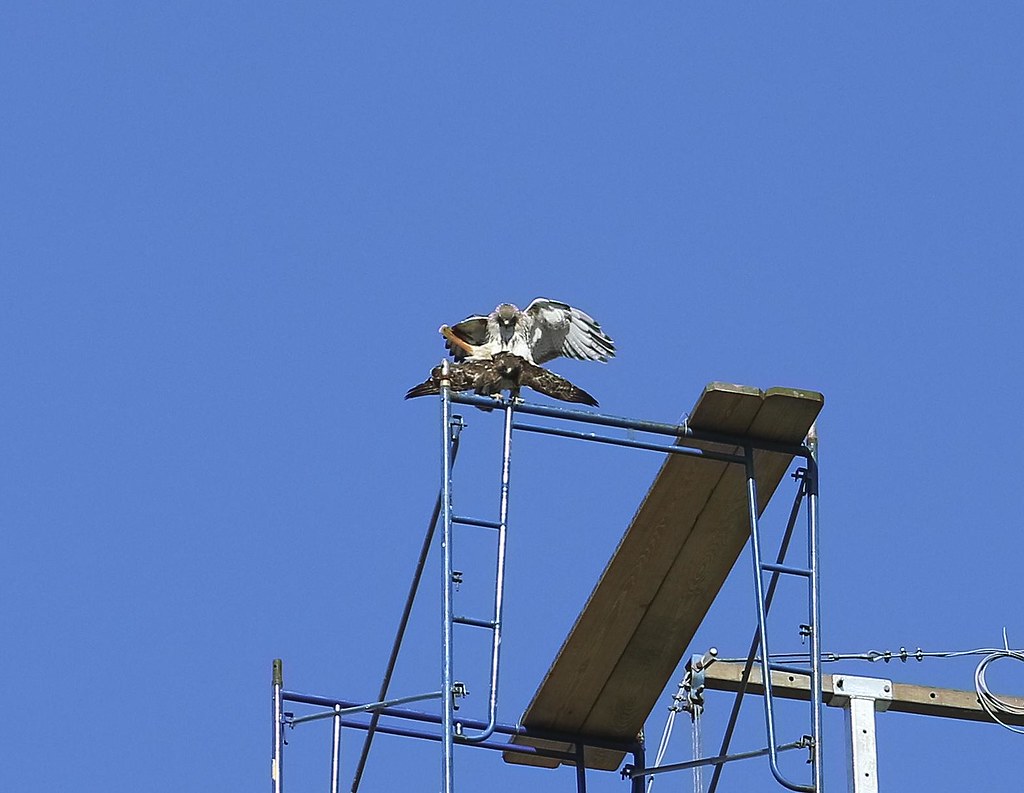 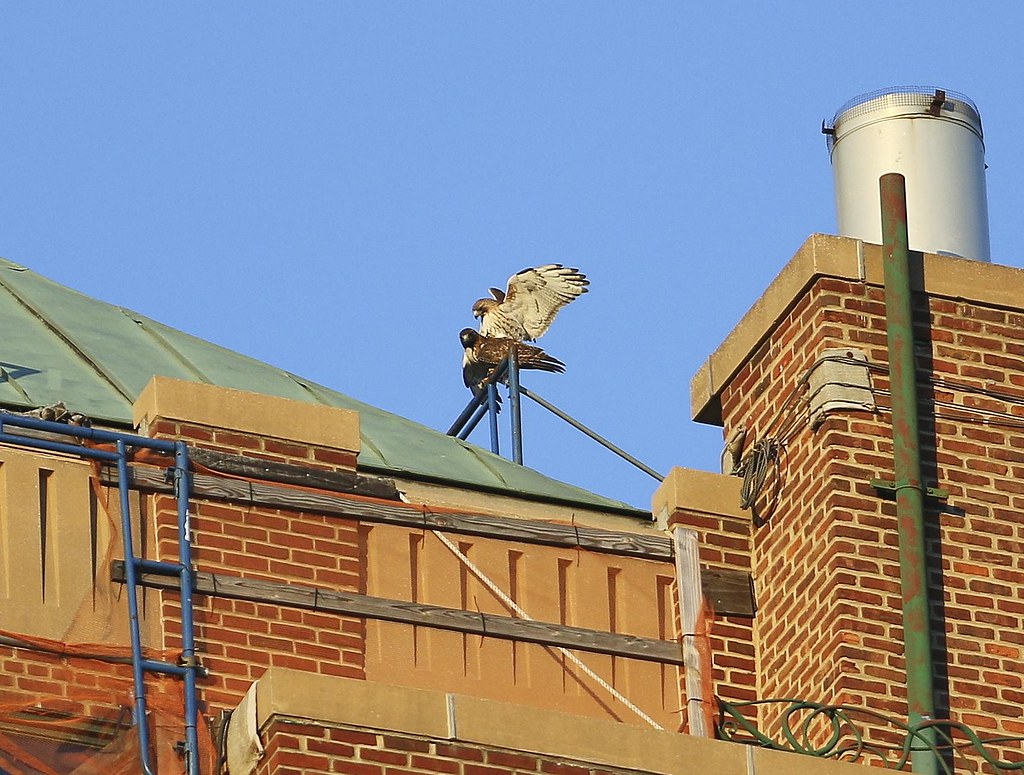 I finally caught them mating on top of a church cross (Most Holy Redeemer).  Unfortunately, I was 4.5 blocks away, so this was the best I could do. 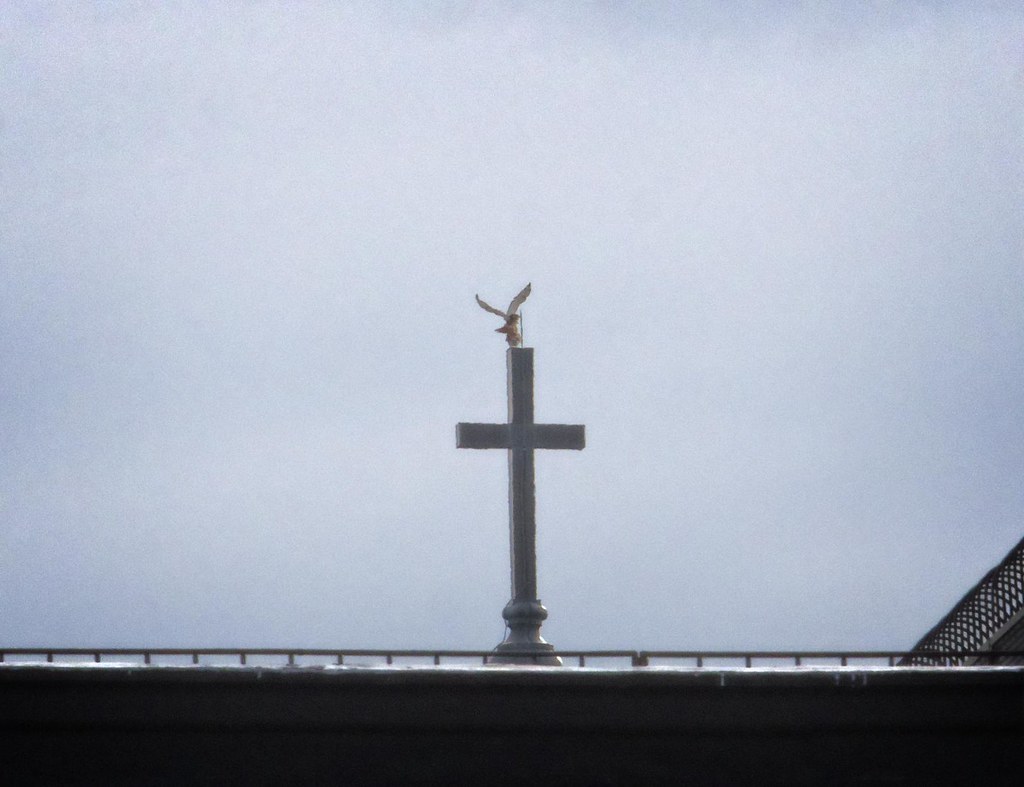 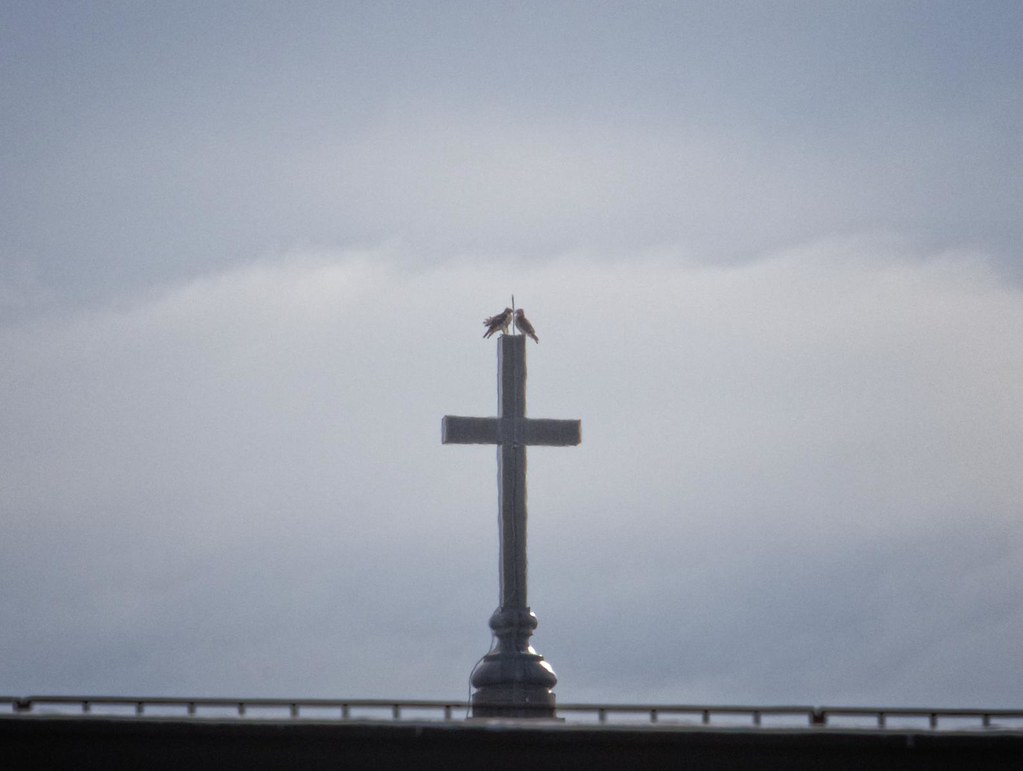 Dora on the left, Christo on the right.
Posted by Goggla at 9:09 PM