This last weekend was a very active one for the Tompkins Square Park hawks.  Two fledges have been confirmed, the third may or may not have happened.  This is the best chronology I can put together:

Thursday, June 9, 8:08pm - The first hawk fledges from nest tree to the Krishna Tree where it spends the night.

Friday, June 10 - At some point, Fledgling #1 returns to the nest to eat, then flies out again and remains in the east end of the park.

Saturday, June 11, around 8am - The second hawk fledges across Avenue B to St Brigid's church.  It attempts to join mom Dora, who is perched on the cross, but the fledgling lands on the roof and slides down the slippery metal slope.  This reminds me of last year's second fledge who took to sliding on the dome of Most Holy Redeemer church on E 3rd Street while Dora looked on.

Sunday, June 12, some time between 10am and noon - Fledgling #2 returns to the nest.  Fledgling #1 had also returned to the nest some time earlier.  At 12:55pm, one of the hawks crept out to the northernmost part of the ginkgo and flew to a tree near the dog run.  My first thought was this was the third fledge, but after spending the rest of the day observing the hawks, I tend to think it was likely Fledgling #1 as it displayed some pretty good flying skills.  By evening, all three kids were in the nest again and had some dinner that was dropped off by dad Christo.  After dinner, one of the hawks - who I believe was likely Fledlging #1 - left the nest again and explored the tops of some nearby trees.

As the hawks keep returning to the nest to eat, it's become almost impossible to tell who is who and I don't know if the third nestling has fledged or not.  The good news is all three hawks look great and the whole family seems to have everything under control.

This is Fledgling #1 on Saturday, perched in the large tree in the middle of the sunbathing area of the park: 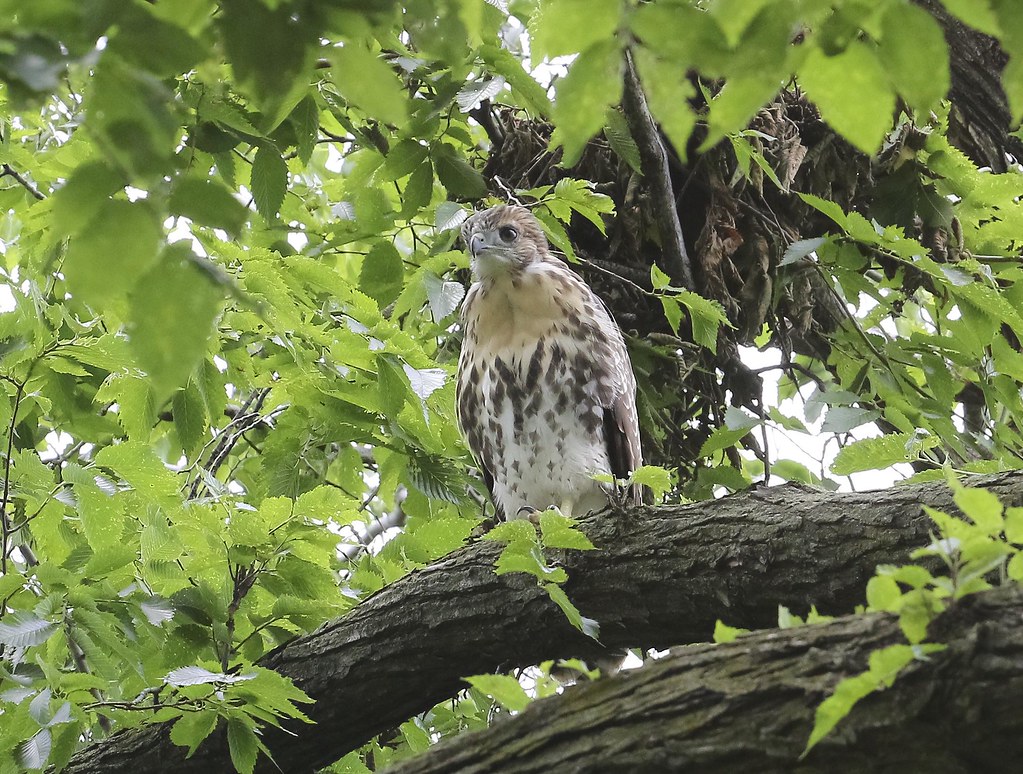 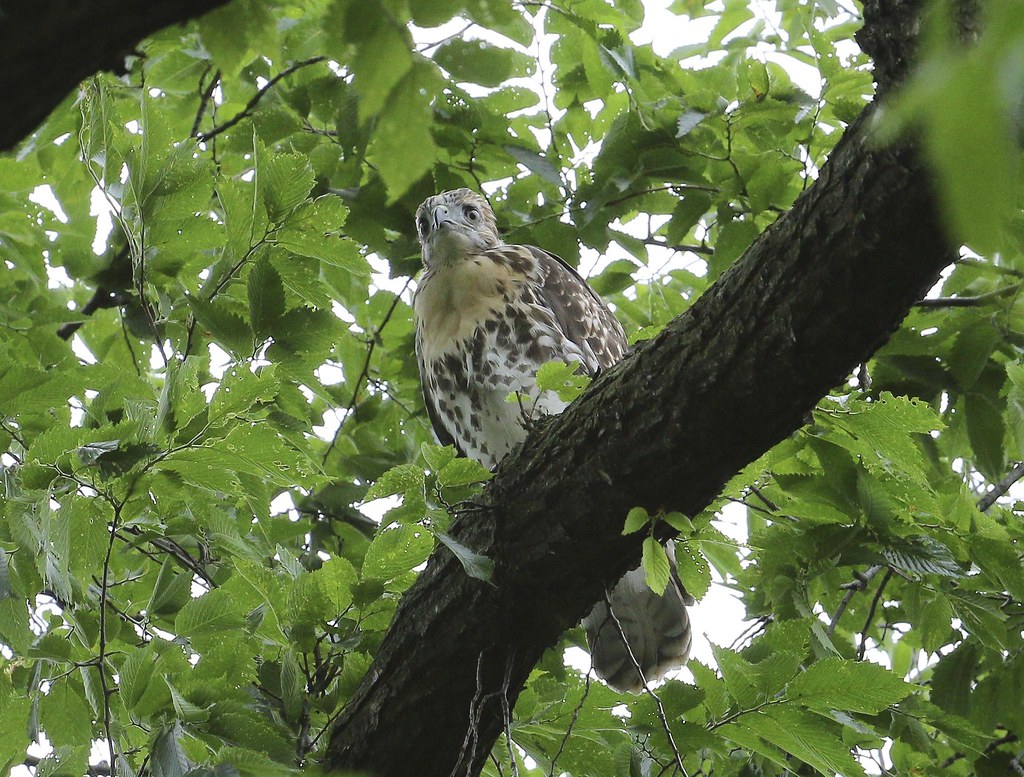 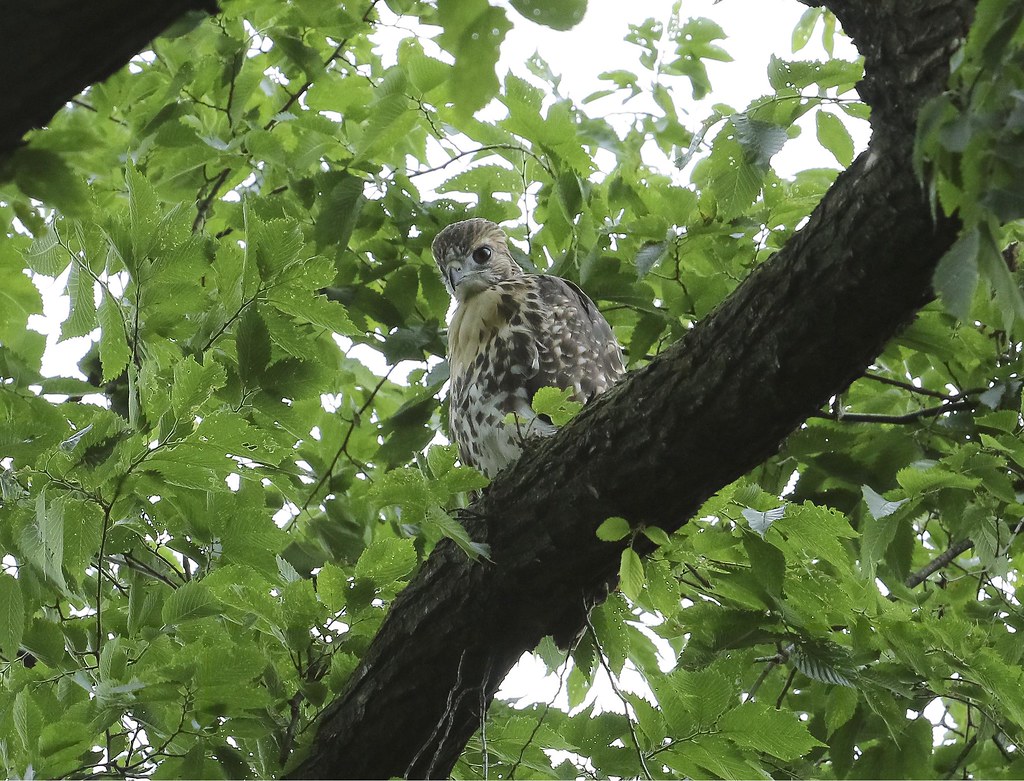 And here is Fledgling #2 during its time on the roof of St Brigid's on Saturday: 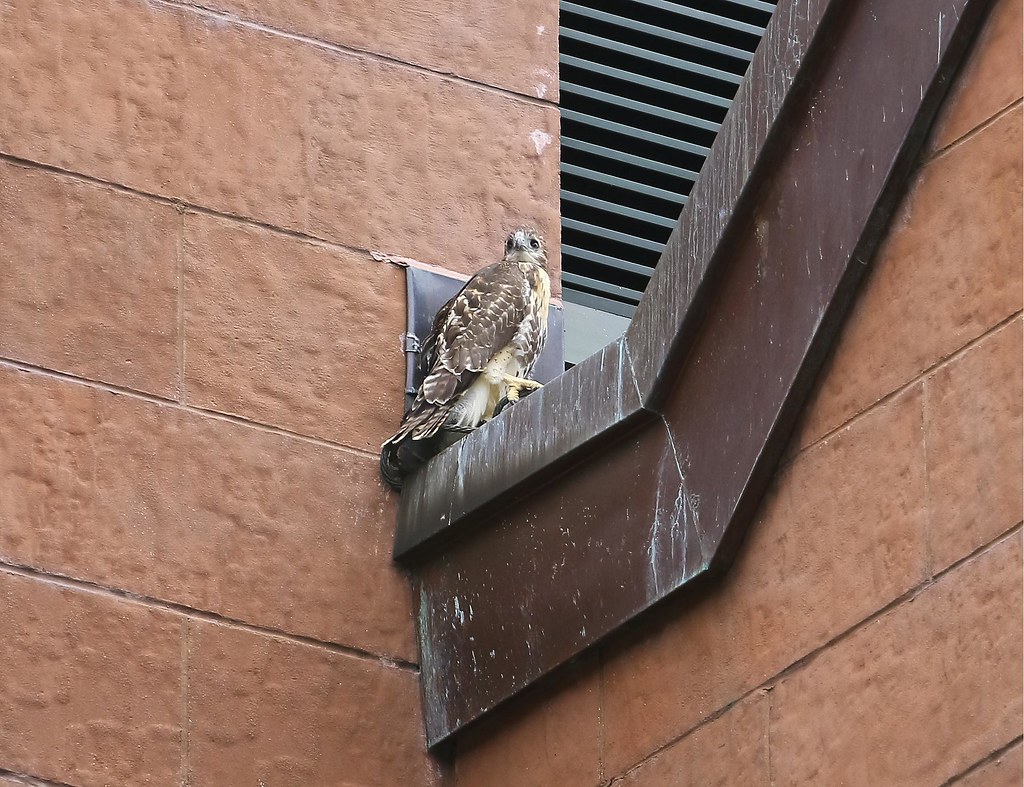 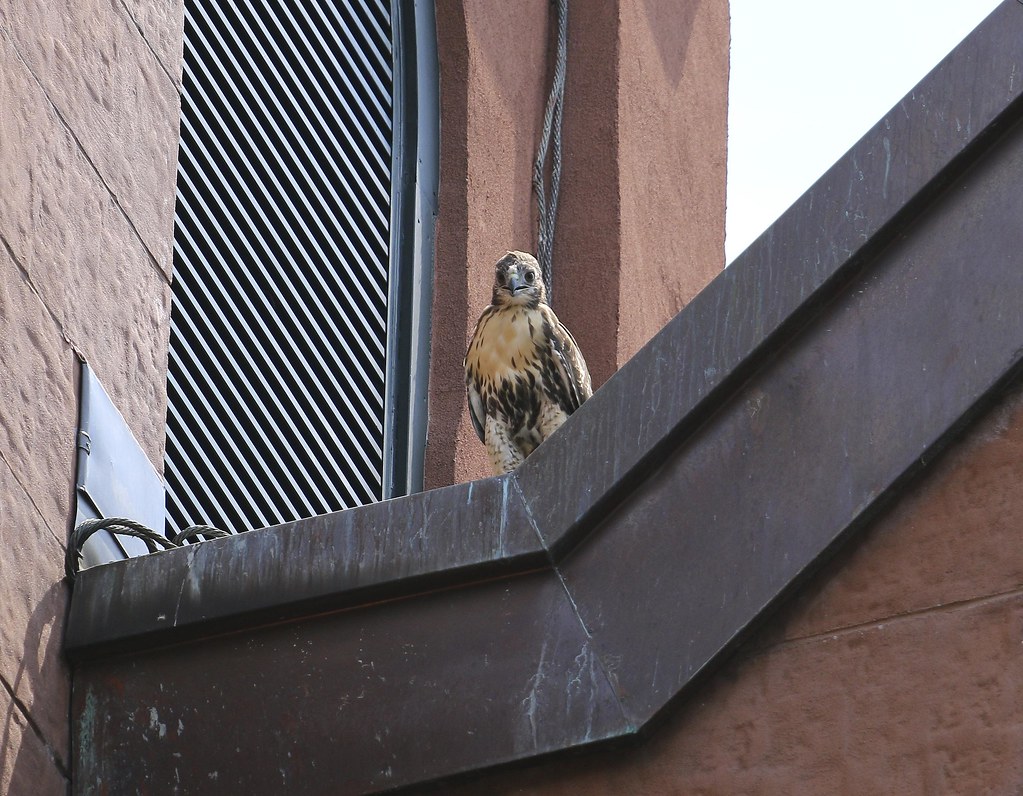 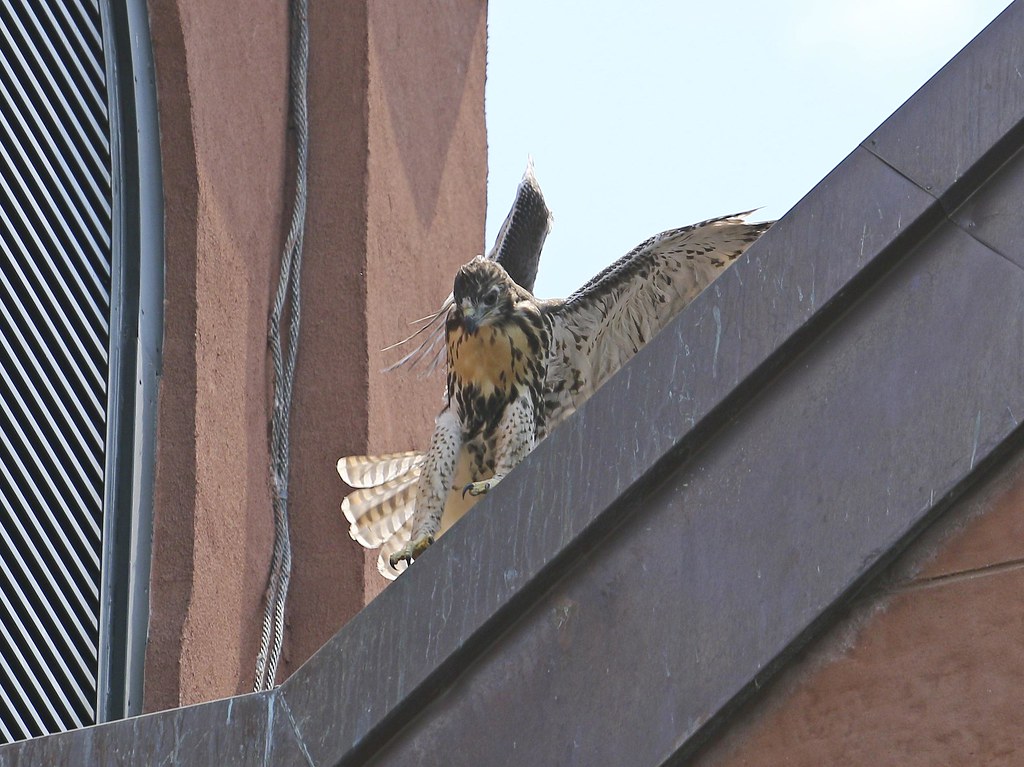 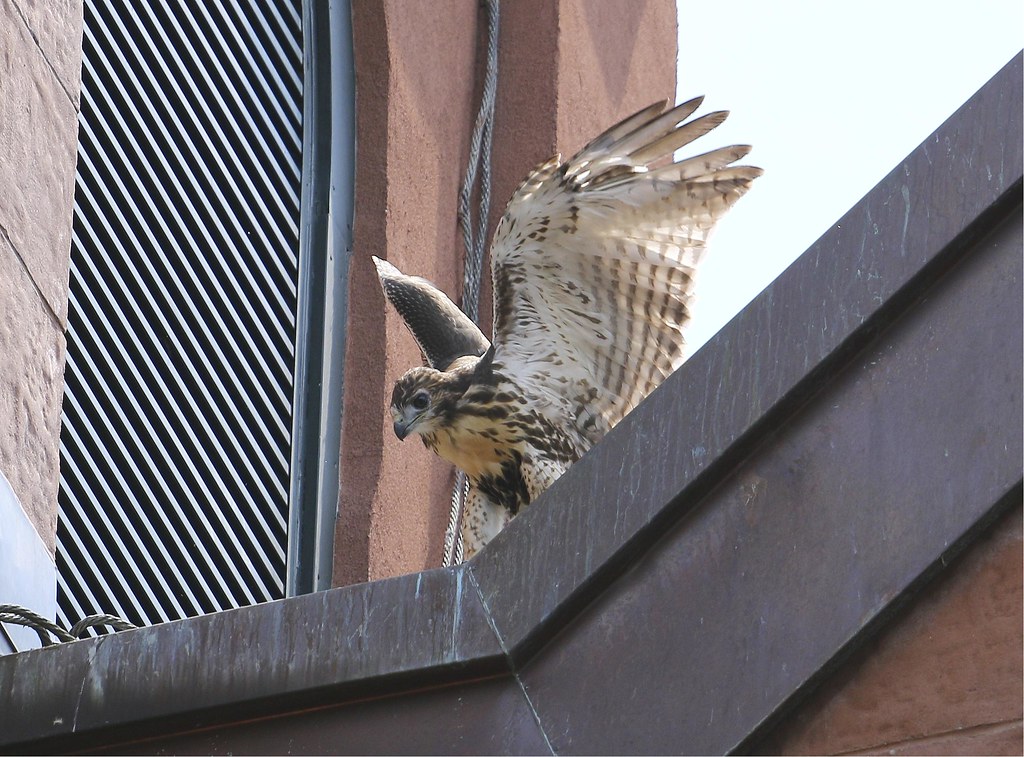 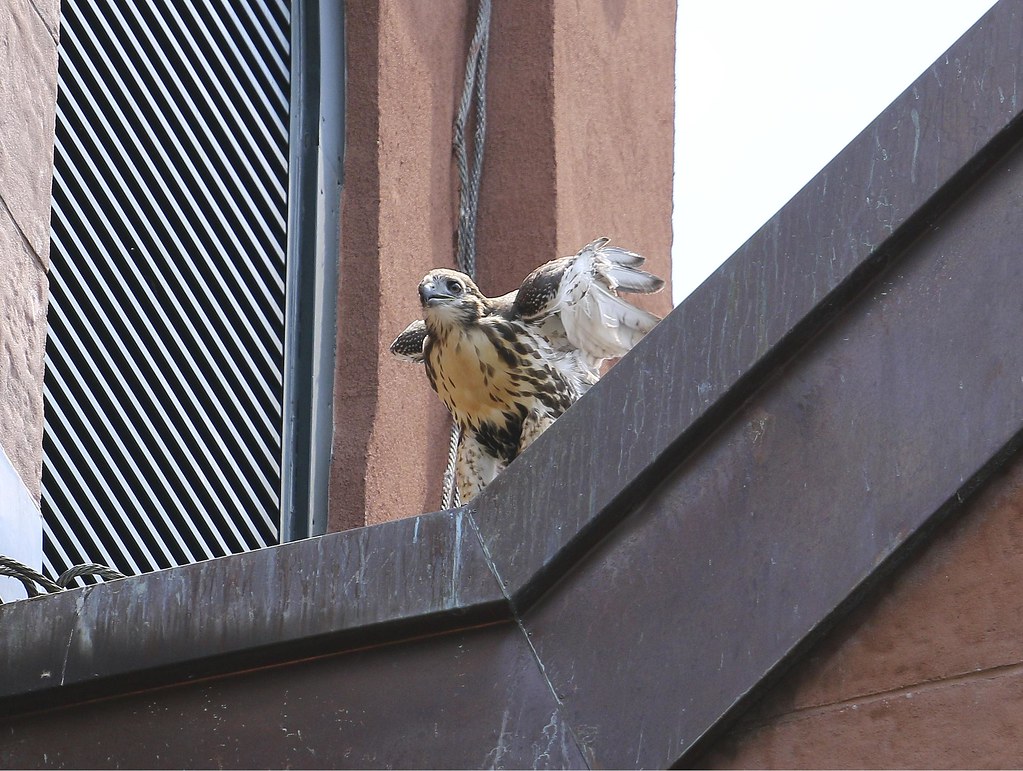