Foster hawk fledgling makes himself at home in Tompkins Square

The severe weather today had me worried about the fledgling hawks in Tompkins Square Park, so I joined some fellow hawk-watchers this evening to check on the birds during the deluge.  They were each perched quietly in the trees and looked just fine.

Since my previous post, there's been quite a bit of hawk activity in the park.  I went a little crazy taking photos this weekend, so there will be several updates this week.

After the new fledgling (I will refer to him as Flatbush, since people were calling him that when he arrived), was introduced to the park last Wednesday, I returned on Thursday to see how things were going.  Flatbush was still in the redwood tree on the central lawn where Ranger Rob had placed him the day before. 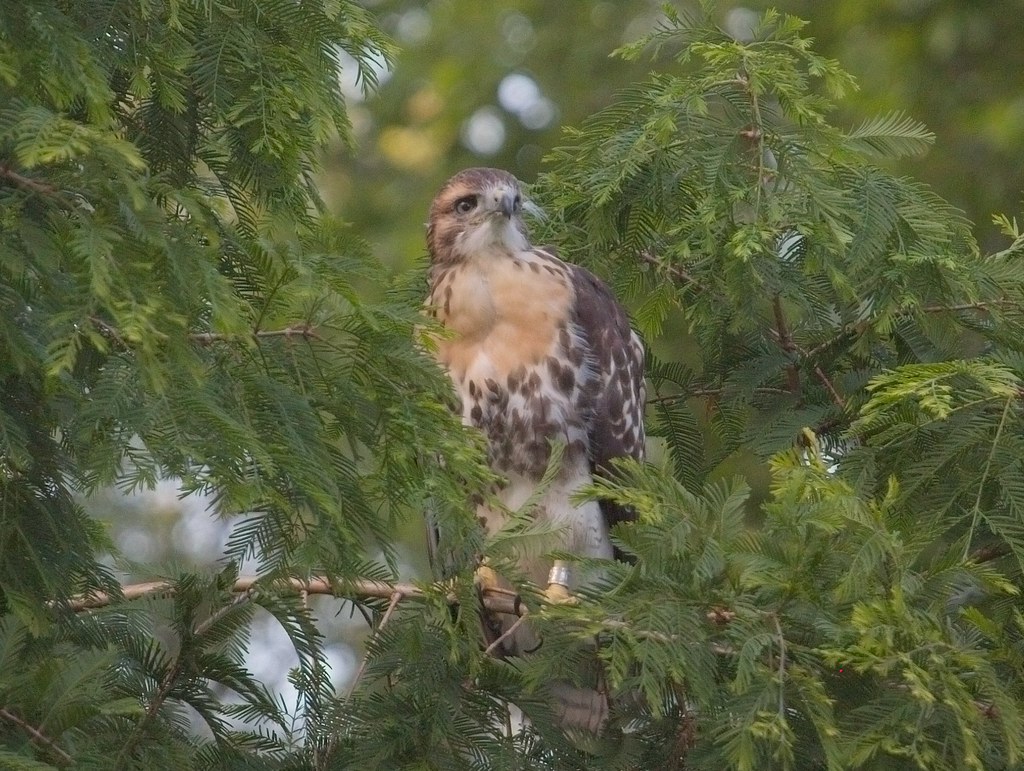 Christo was busy flying around the park with food, calling to the young hawk. 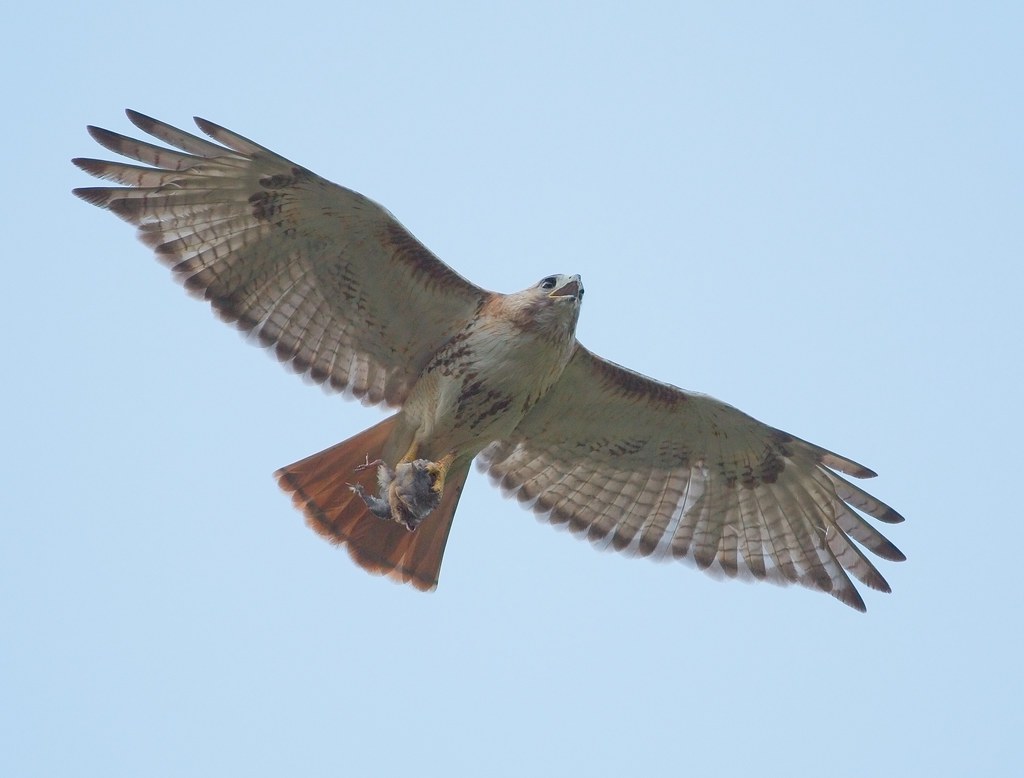 This was a very good sign as it meant Christo and Dora had accepted the youngster as their own and Christo was trying to lure it to a different spot so he could feed it.  As he flew around, I saw the first fledgling (I've been calling it Ten as it's Christo and Dora's tenth kid) was still up in the willow oak where it had landed the night before. 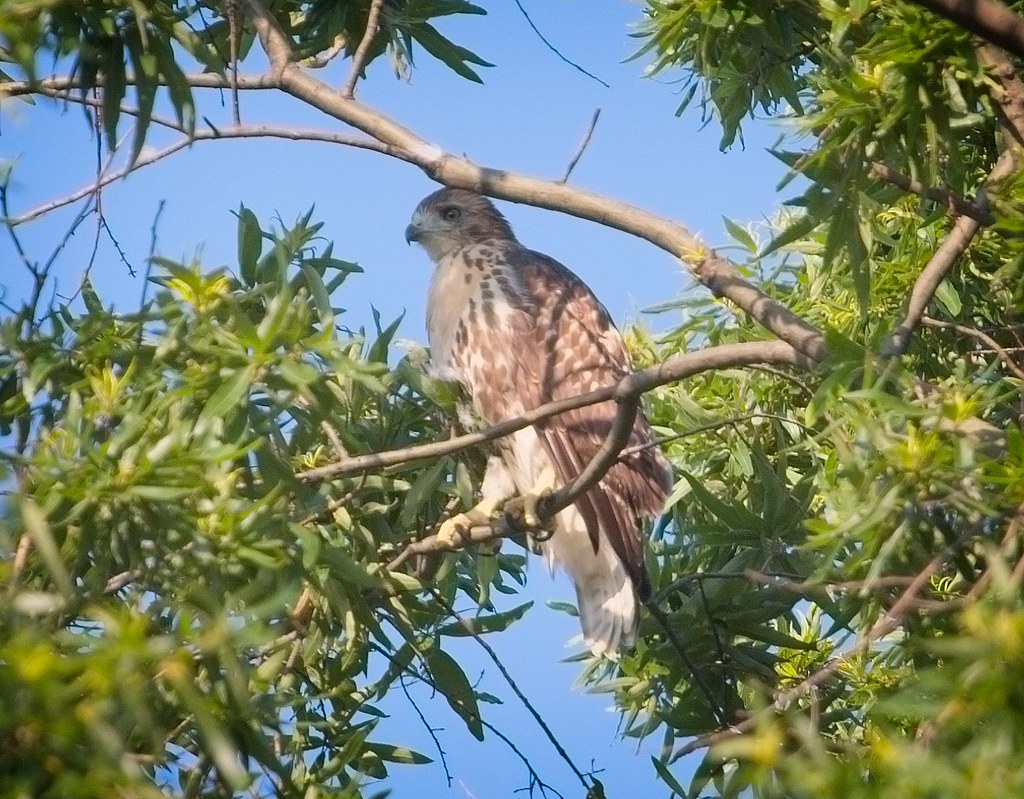 Neither fledgling was being very cooperative and remained perched in their respective spots.

I returned Friday morning to find Flatbush still in the redwood, but Ten had apparently flown to a different tree.  That fledgling stayed high in the trees all day where I couldn't see it, but that's where the birds are supposed to be, so I didn't worry about it.  I spent the next eleven hours fixated on Flatbush.

Around 10am, Christo, who had apparently given up on trying to entice Flatbush to move to a different tree, brought Flatbush a rat. 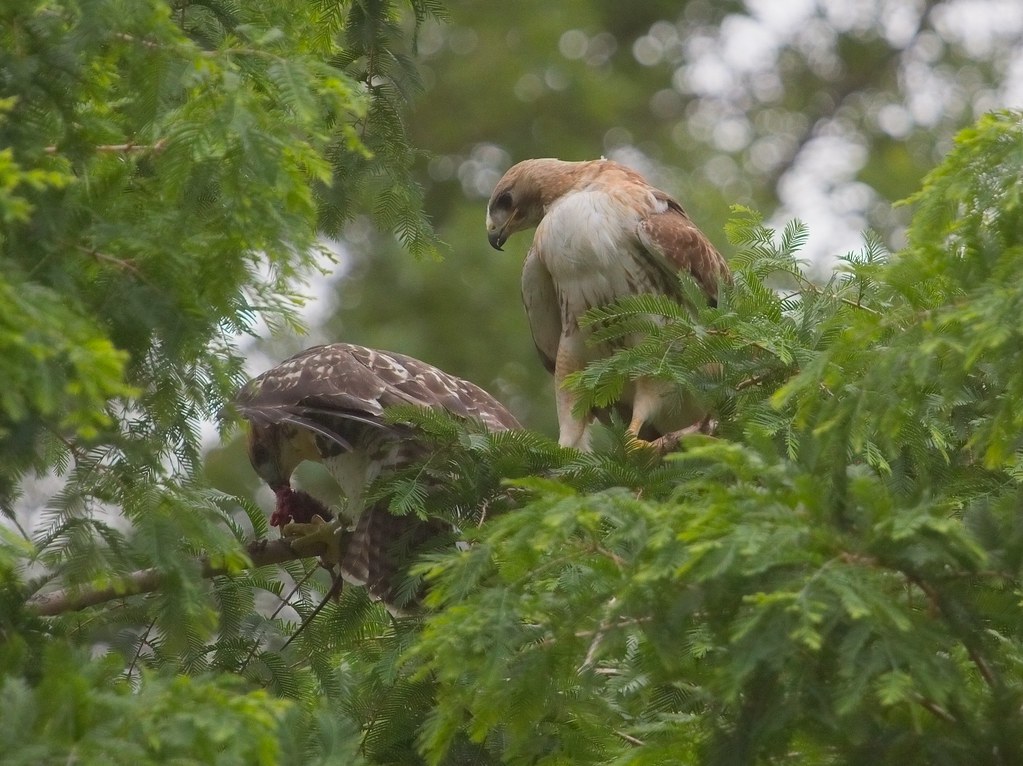 Flatbush is on the left mantling a rat while Christo supervises from the right.

As the fledgling originally came from a nest on a stadium light in an urban area, he had never been in a tree until he came to Tompkins Square.  It took him some time to learn to balance and hold onto food. 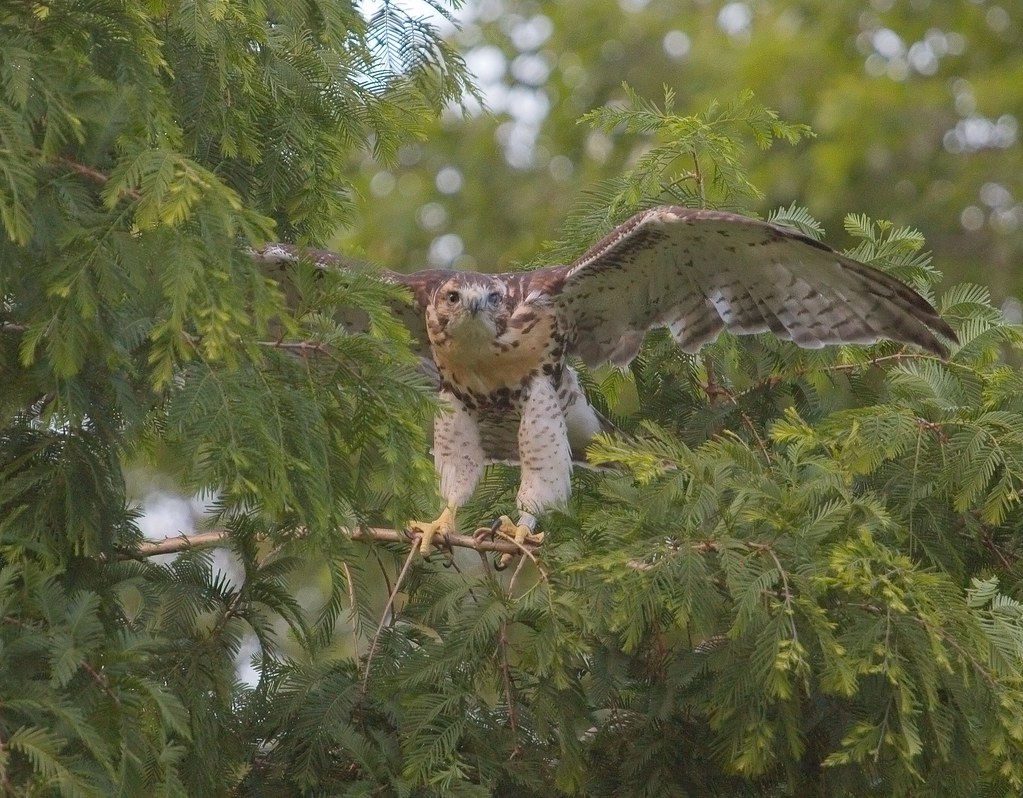 After a big brunch, Flatbush zonked out for a few hours.  At this point, I just wanted to see him fly out of the redwood as no one had seen him fly yet.  Around 2pm, he began exercising. 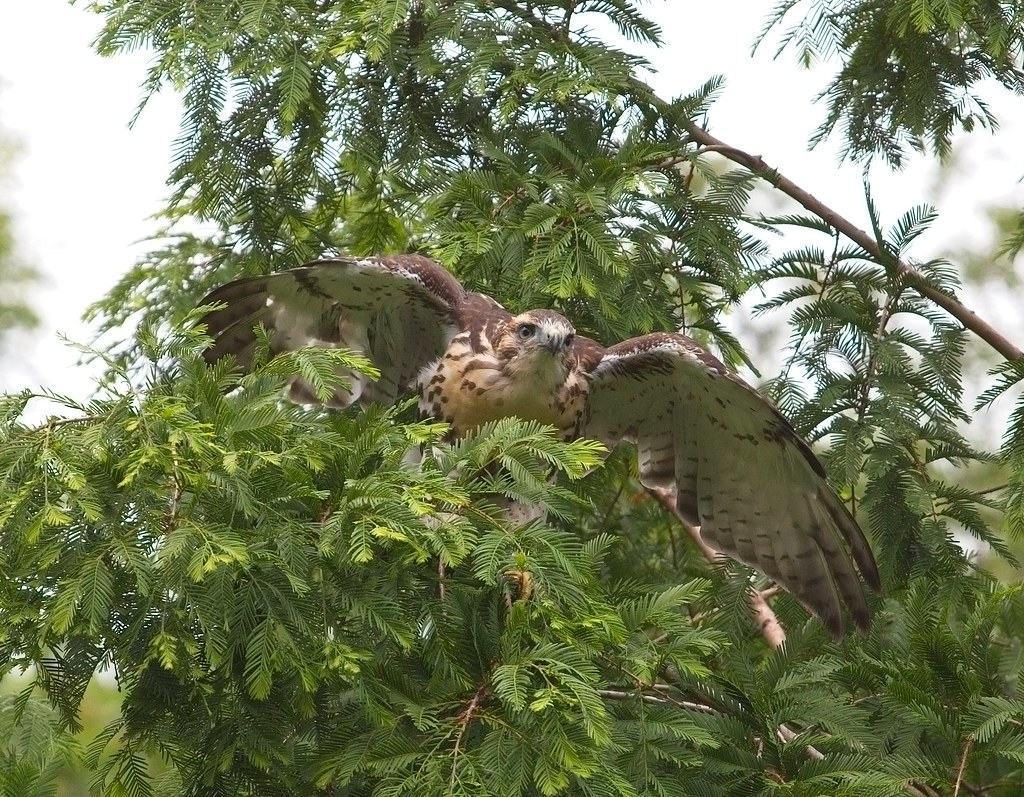 Suddenly, he leapt out of the tree! 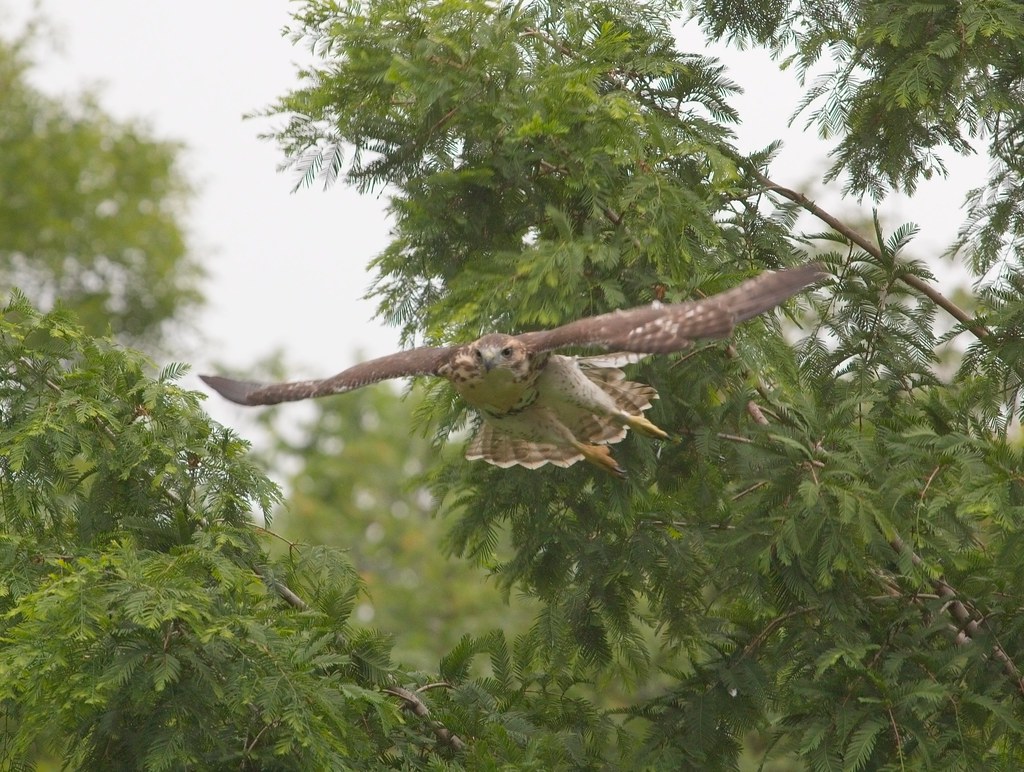 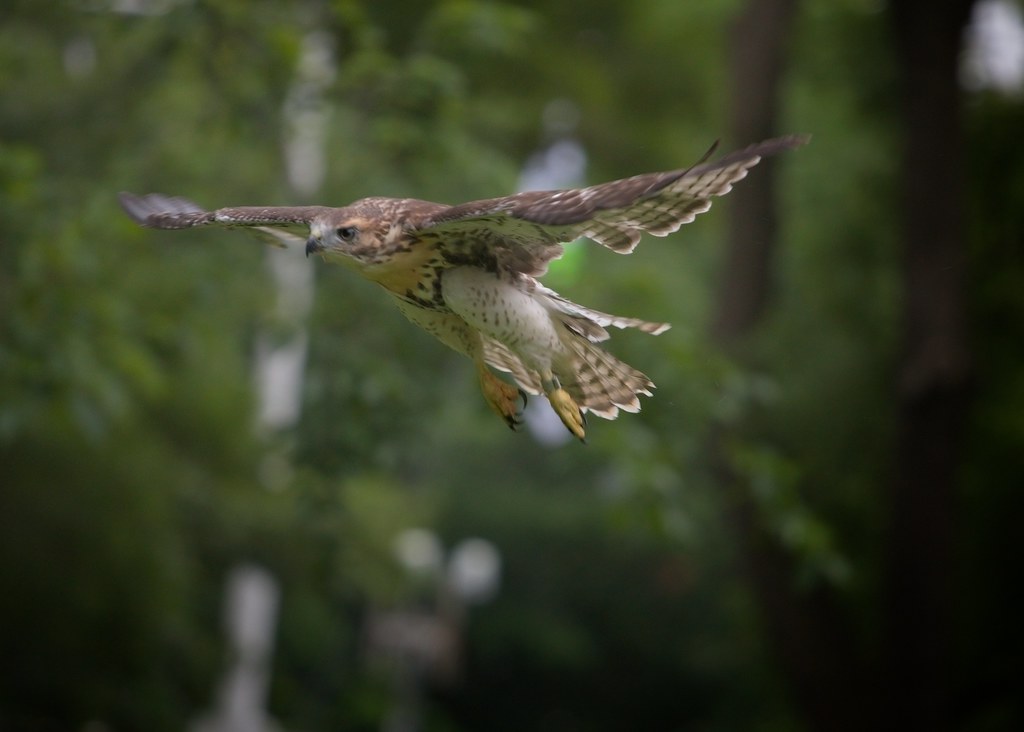 He landed on a fence west of the Krishna Tree, immediately attracting an audience. 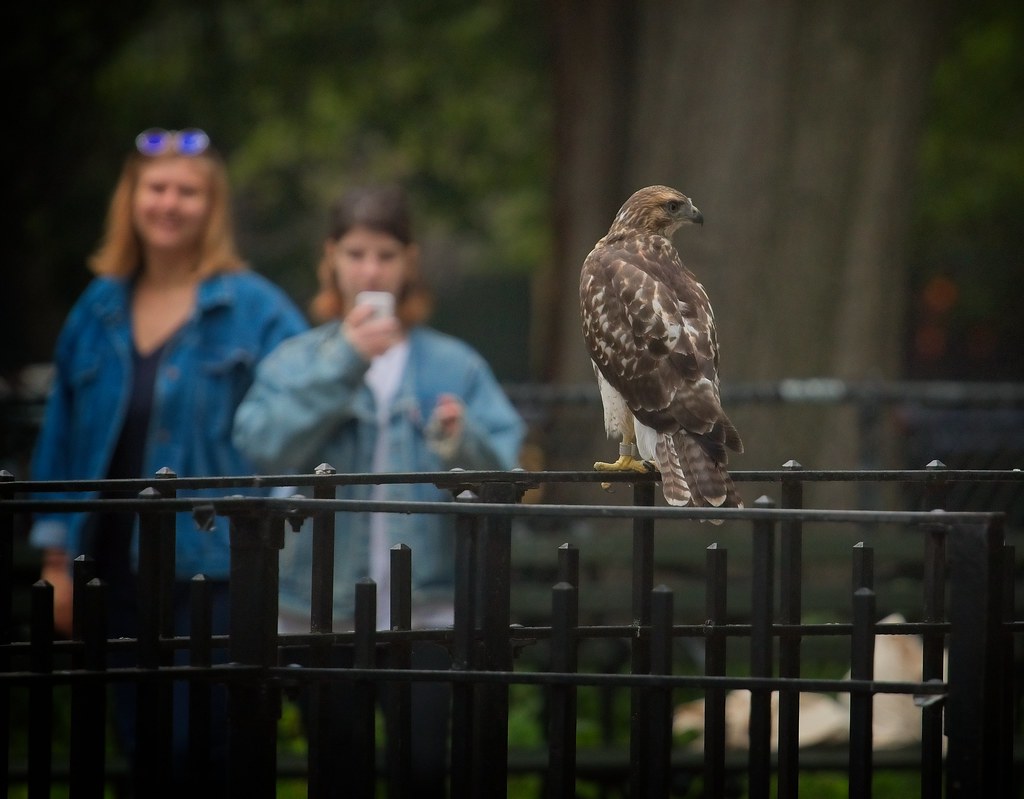 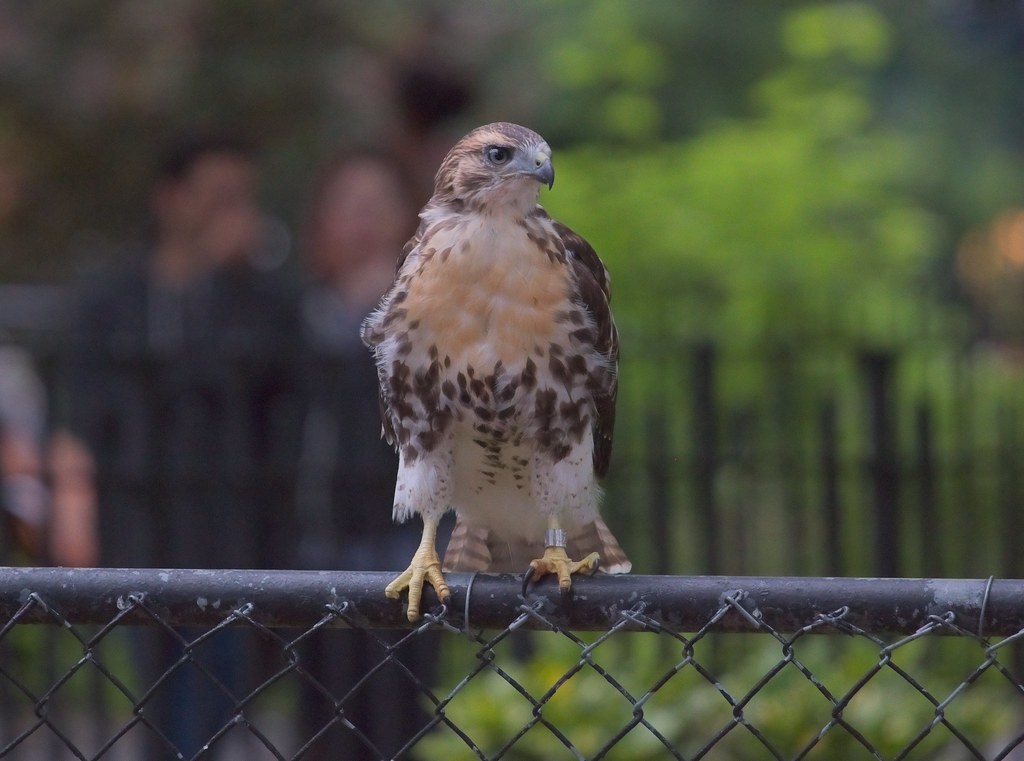 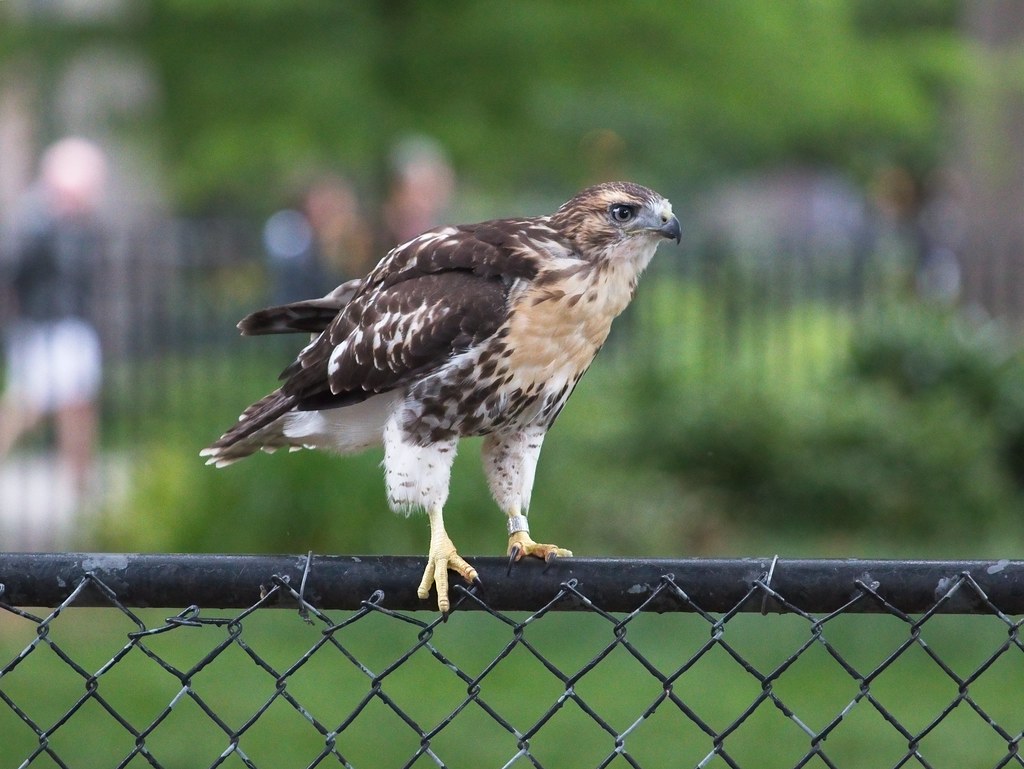 He clumsily attempted to run along the fence before deciding to jump down into the grass of the central lawn. 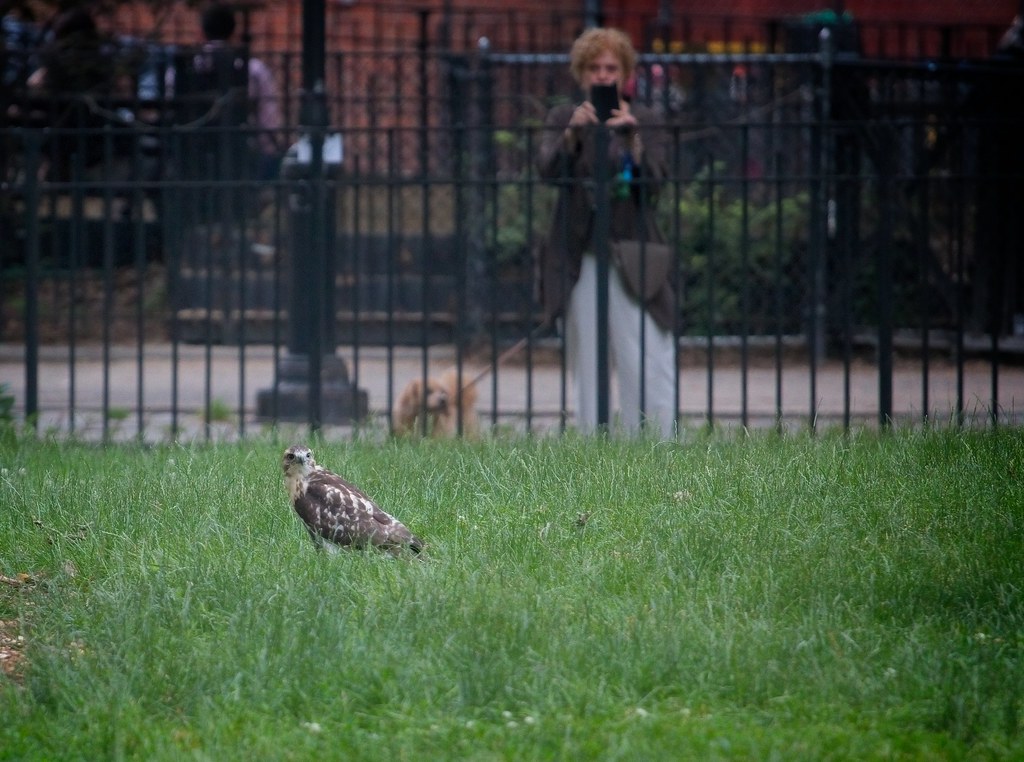 He did a little jogging... 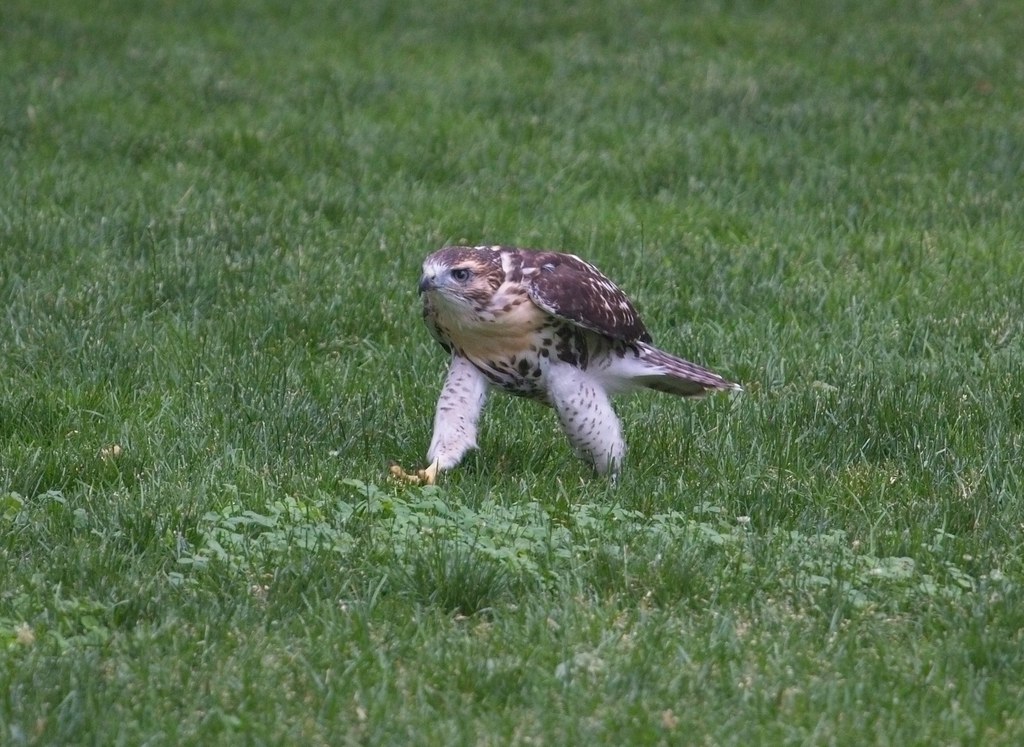 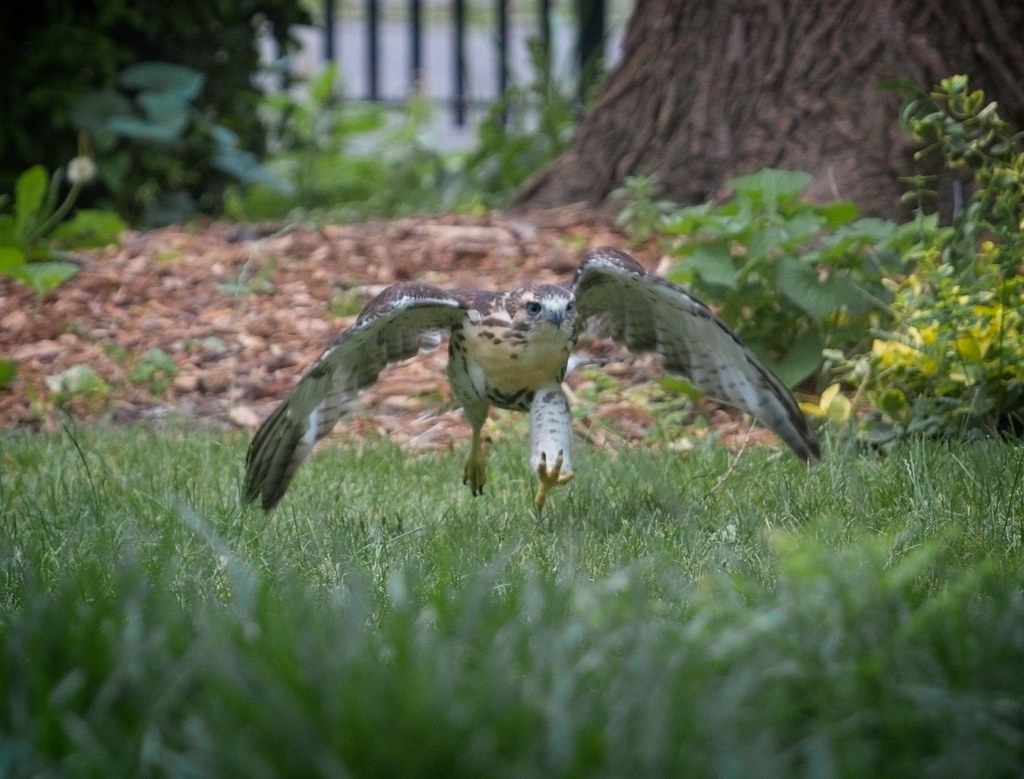 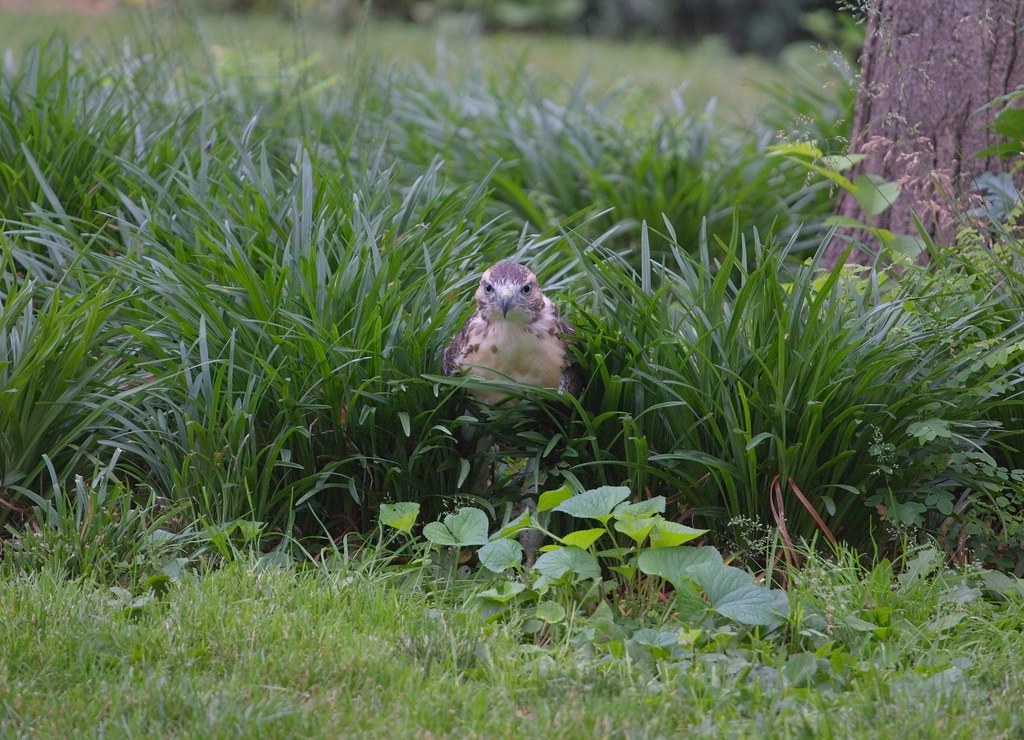 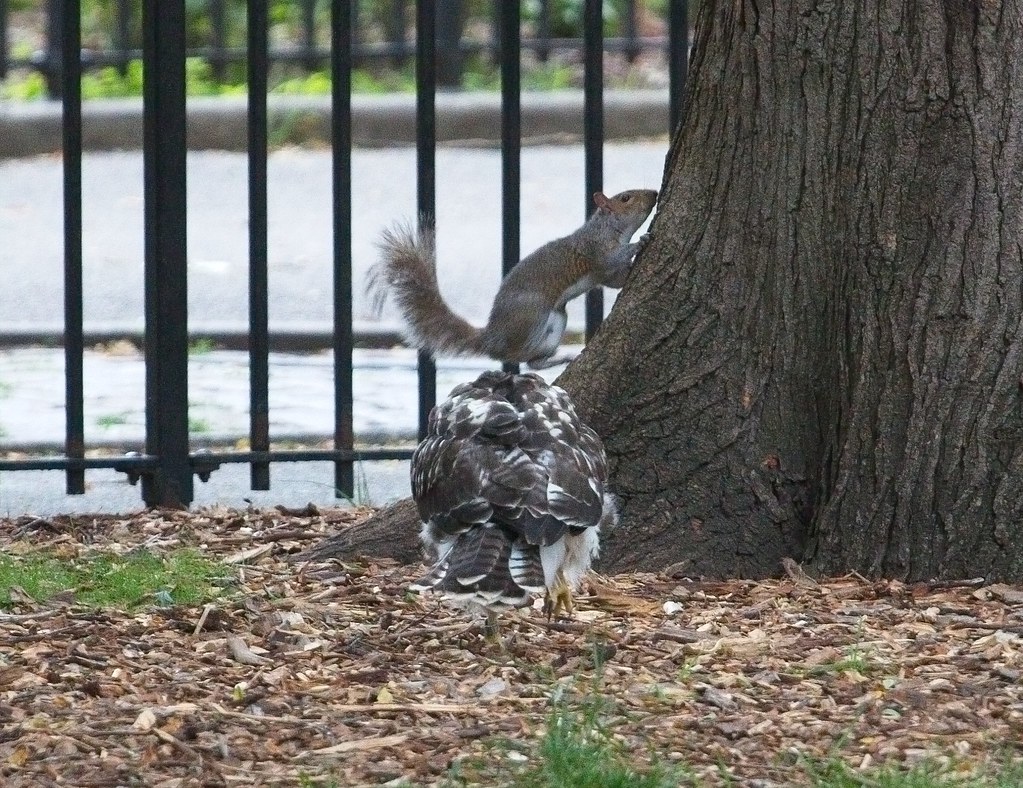 And then settled on the sledding hill to do some people-watching. 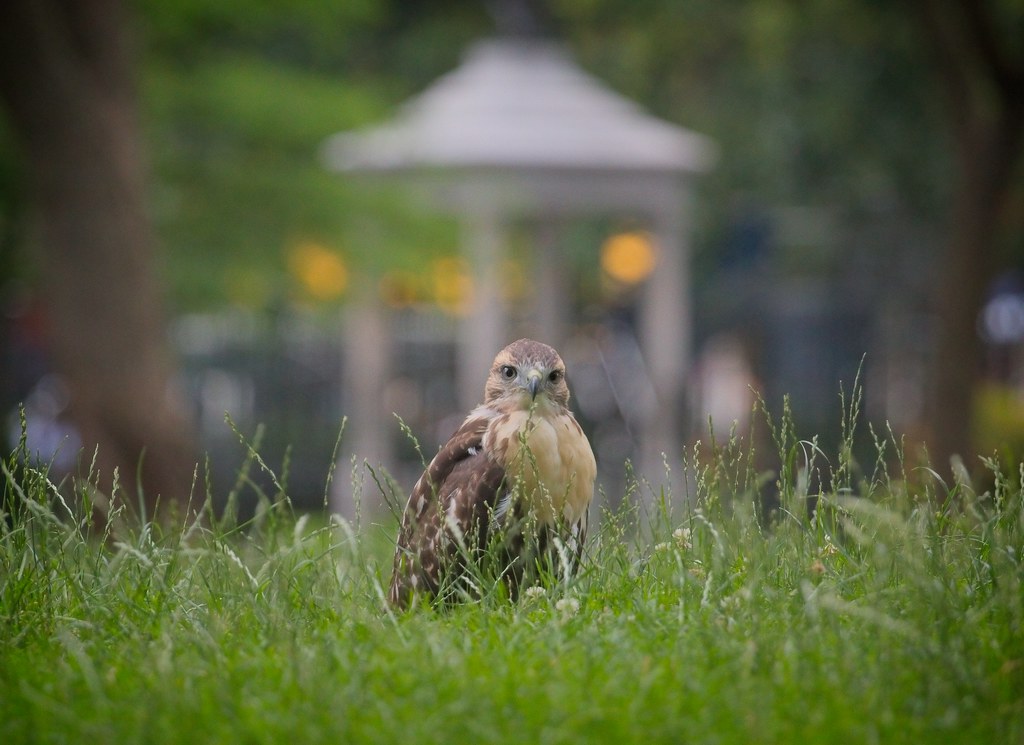 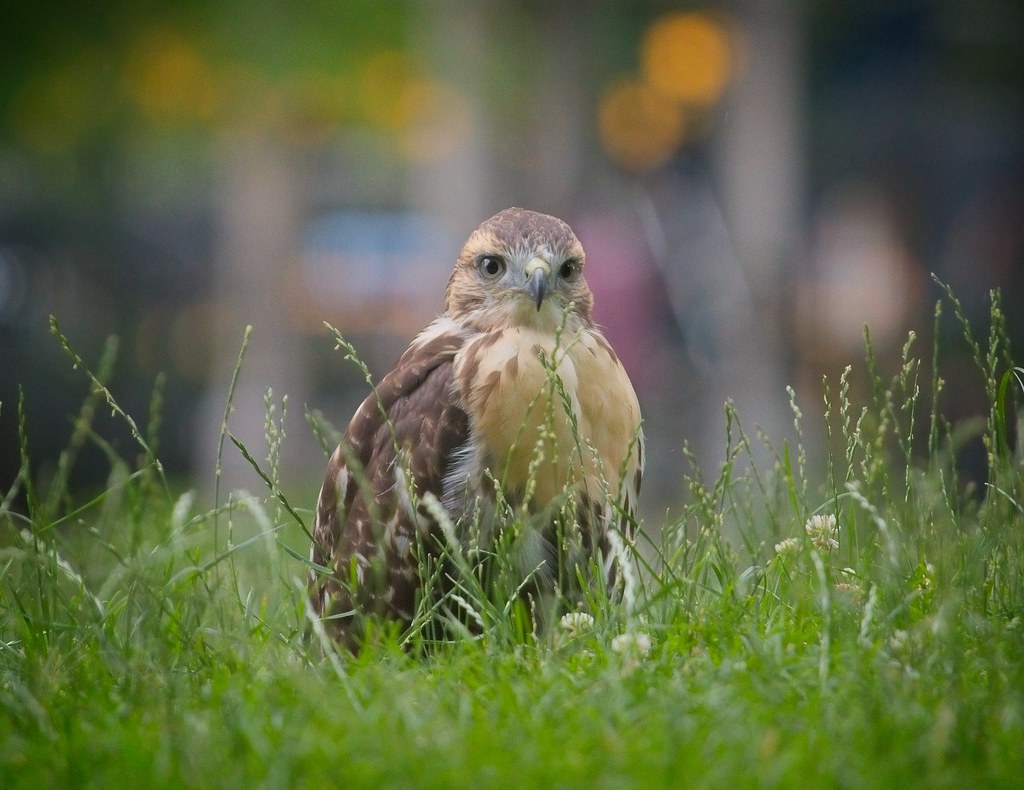