Christo appears to have found a new girl

As nice as it is to anthropomorphize our local hawks and believe they have feelings like we do, they just don't.  It was only this last Monday when Dora was taken into rehab for an injured wing, and it appears that Christo has already found a replacement.  While I've been mourning Dora's absence and am hoping for her swift return, all Christo knows is that Dora is gone and his life must go on.

There have been several hawks around lately and I think a new female has been in the park the last few days.  Christo and this new hawk were seen being aggressive with each other yesterday, but it appears he has now accepted her.

When I arrived in Tompkins Square this afternoon, I saw Not-Dora (Nora?) perched in the ginkgo where Christo and Dora had previously been working on a new nest. 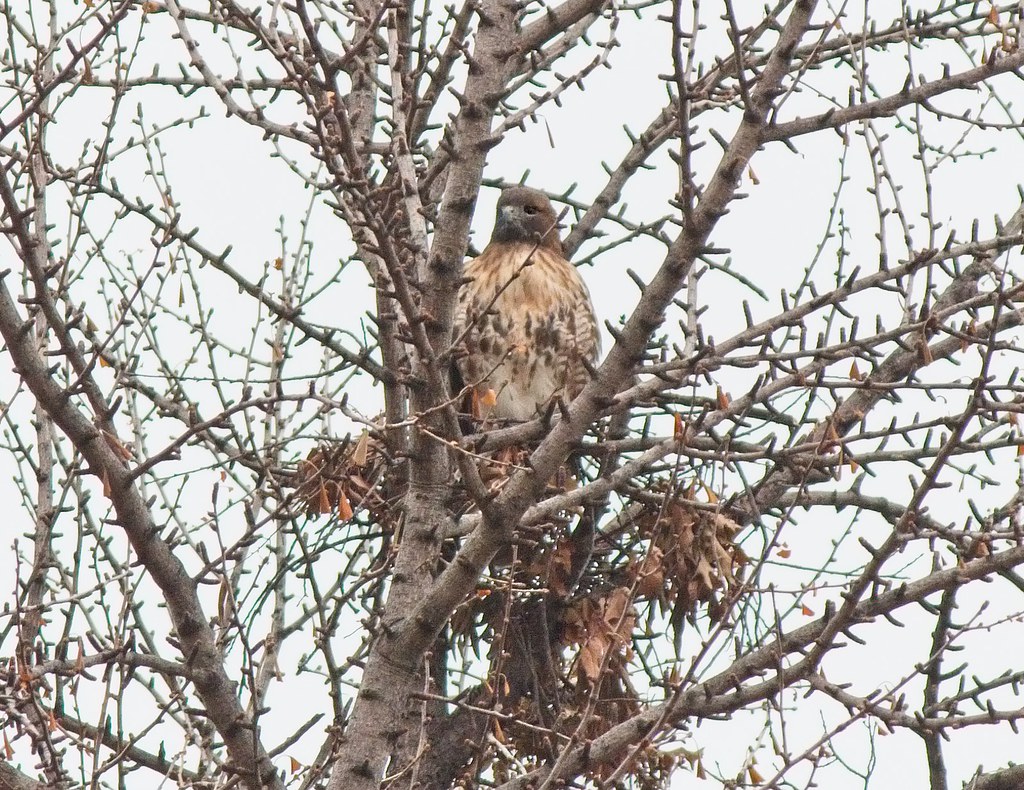 This morning, a fellow hawk-watcher saw N-D perched in the other nest in the locust near the Temperance Fountain.  I have to wonder if this is one way the hawk is claiming Dora's spot.

As I watched N-D in the ginkgo, Christo flew in, landed below her, and held his wings and tail out.  He remained stiff and immobile for about five minutes.  I wasn't sure if he was challenging her, or testing to see whether she would attack him.  She barely glanced at him and he relaxed, perching normally.  Below, Christo is behind the sticks on the lower left while N-D is perched at the upper right. 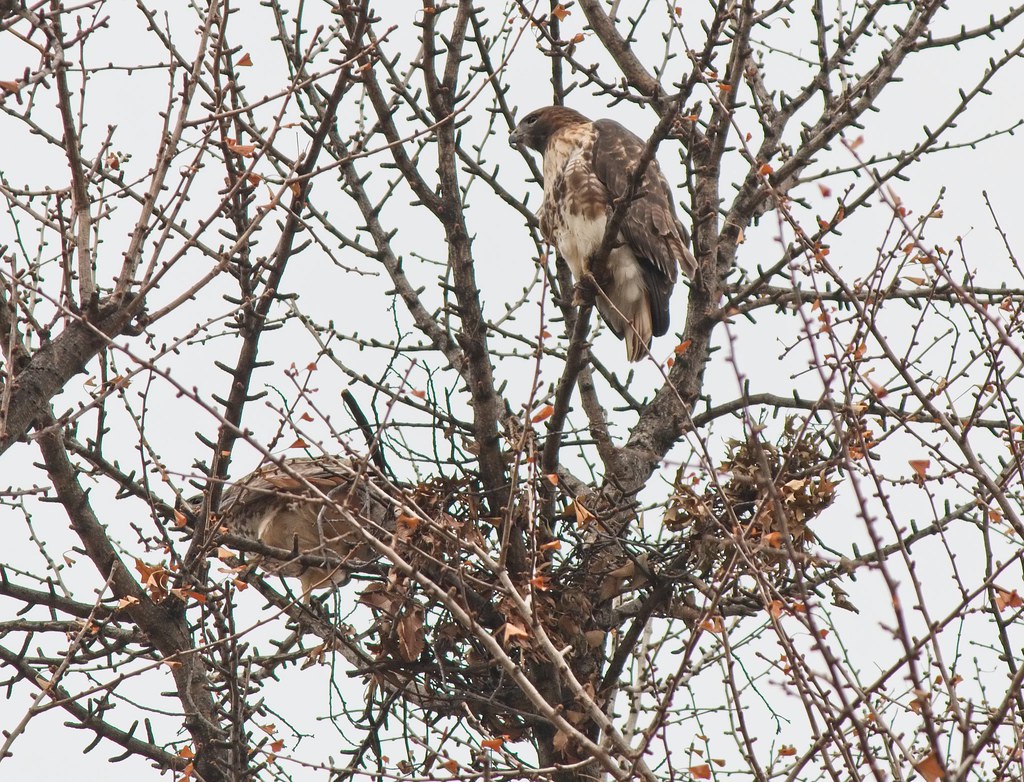 Christo then broke a stick from a neighboring tree and took it to the ginkgo nest as N-D watched. 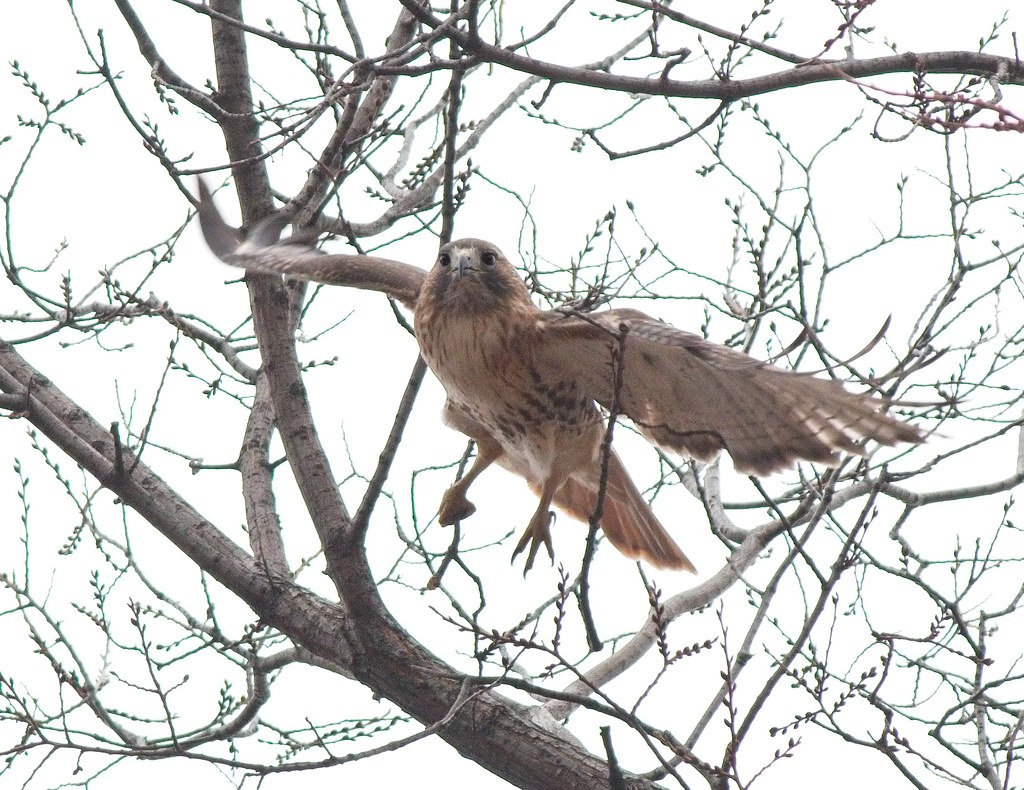 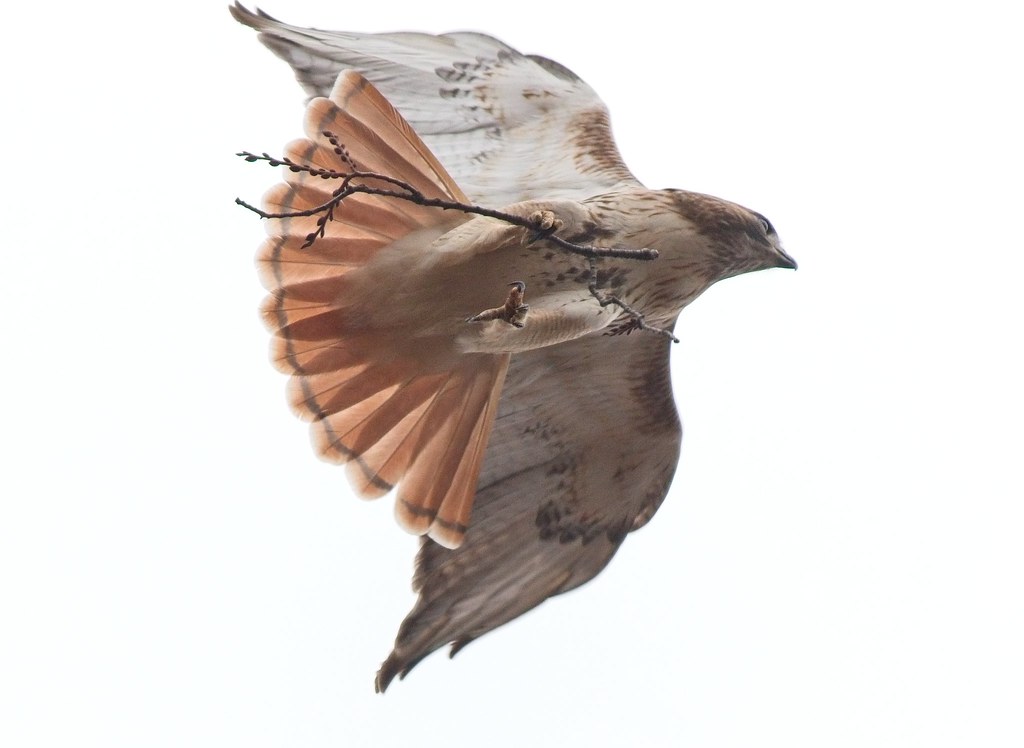 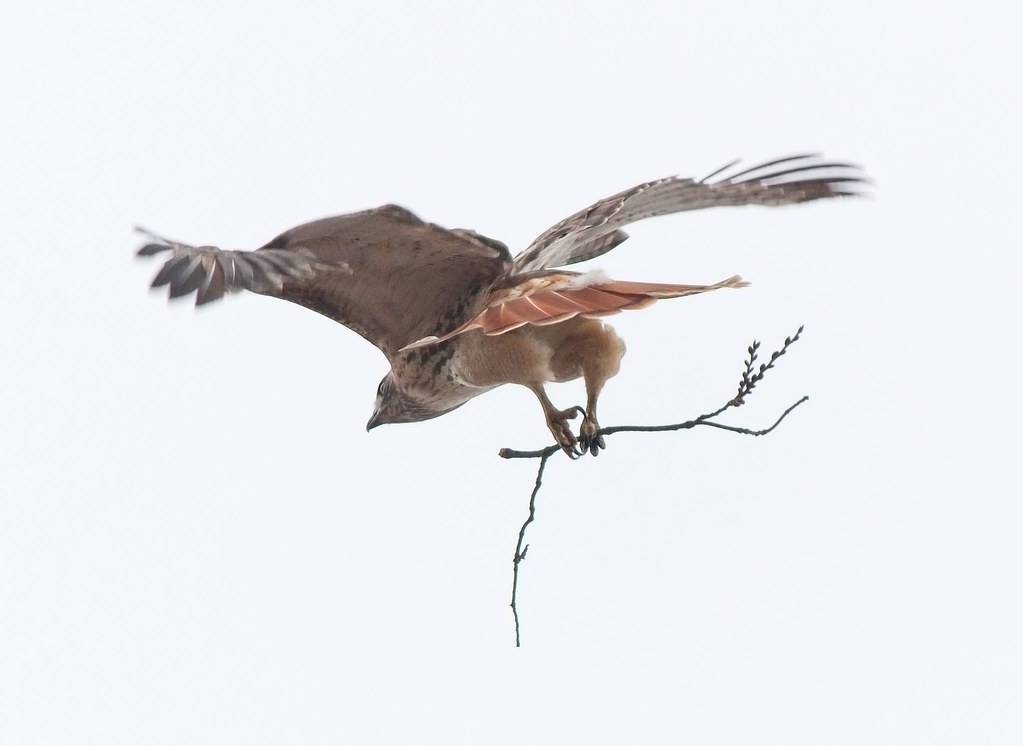 It upset me to see this because it likely means Christo has decided to accept this new female.  Christo and Dora made such a great couple, it breaks my heart to see him hooking up with someone else.

The two of them then perched near the Krishna tree for nearly an hour.  Below, Christo is on the upper branch, looking down at N-D. 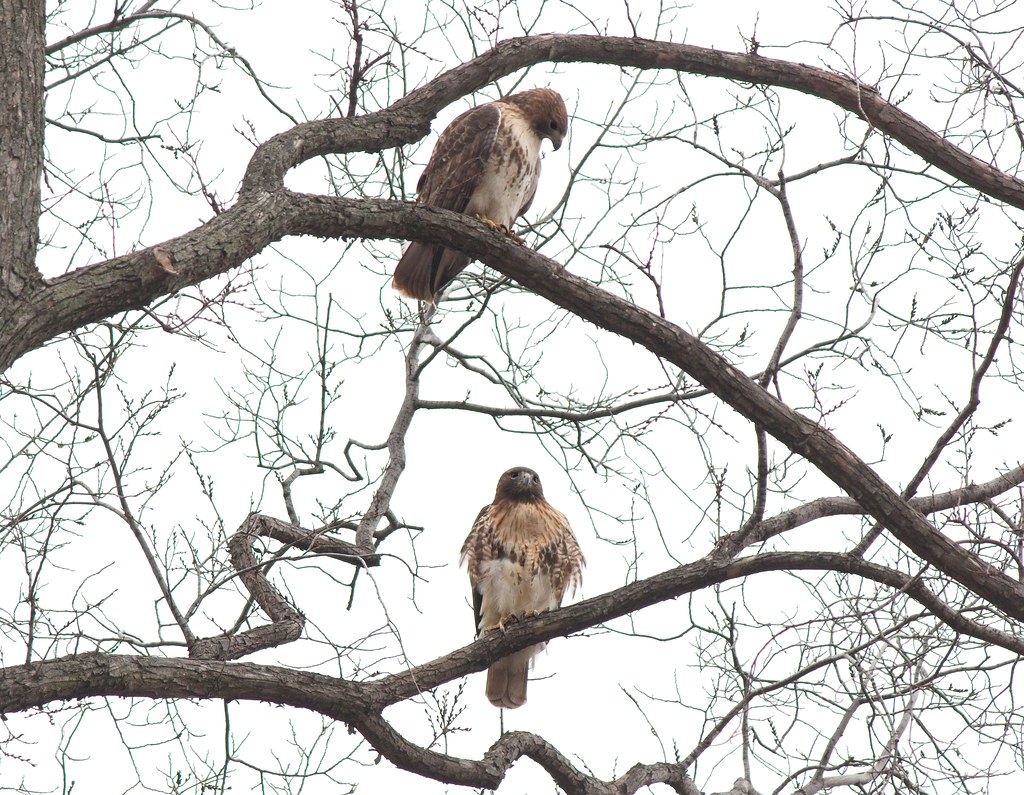 N-D looks a lot like Dora.  She's big, has a dark head and a lot of brown coloring.  One thing I noticed is she has gray feathers beneath her eyes that Dora does not. 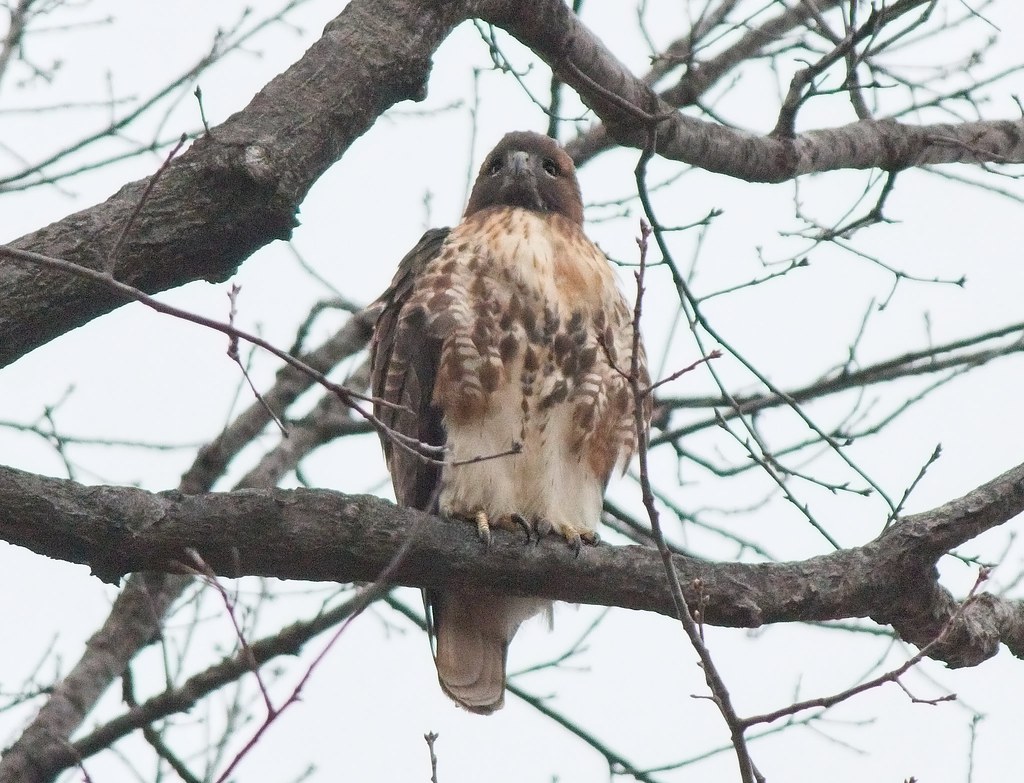 N-D also has rusty flanks and slight barring on her upper legs whereas Dora has solid cream colored legs.  The lighting was really bad today, so the colors in the photo below may be off - it will be better to get a look at her in normal sunlight. 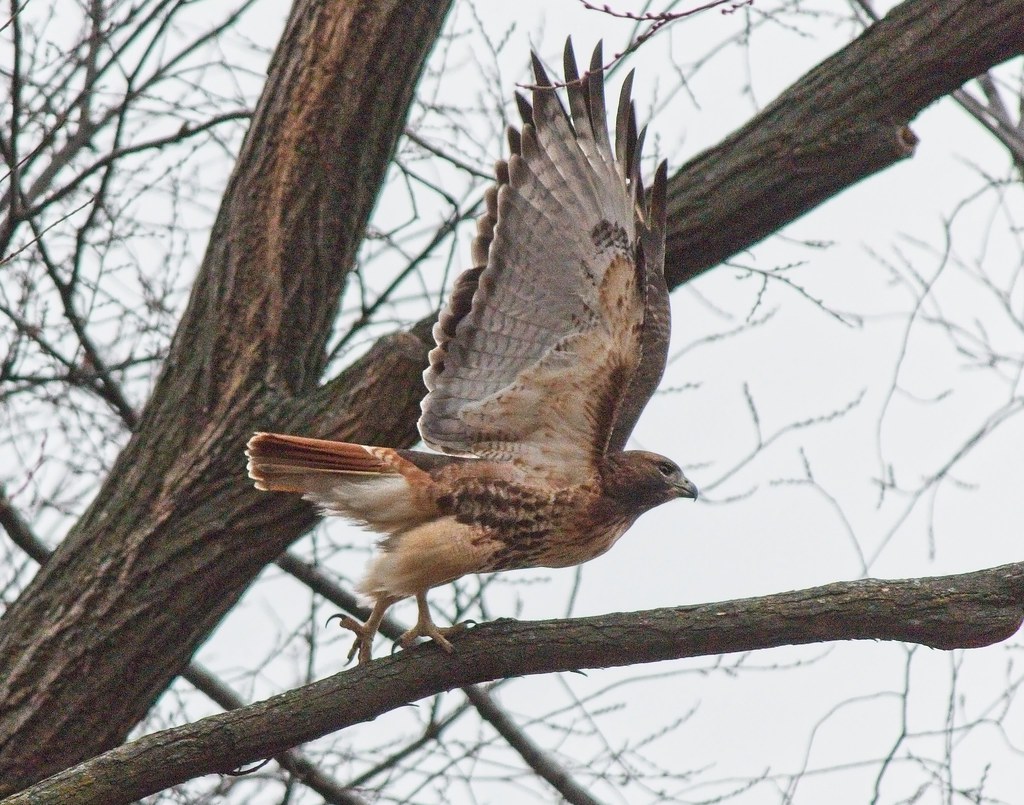 A real sign that Christo is into this new girl is he caught a rat and appeared to offer it to her. 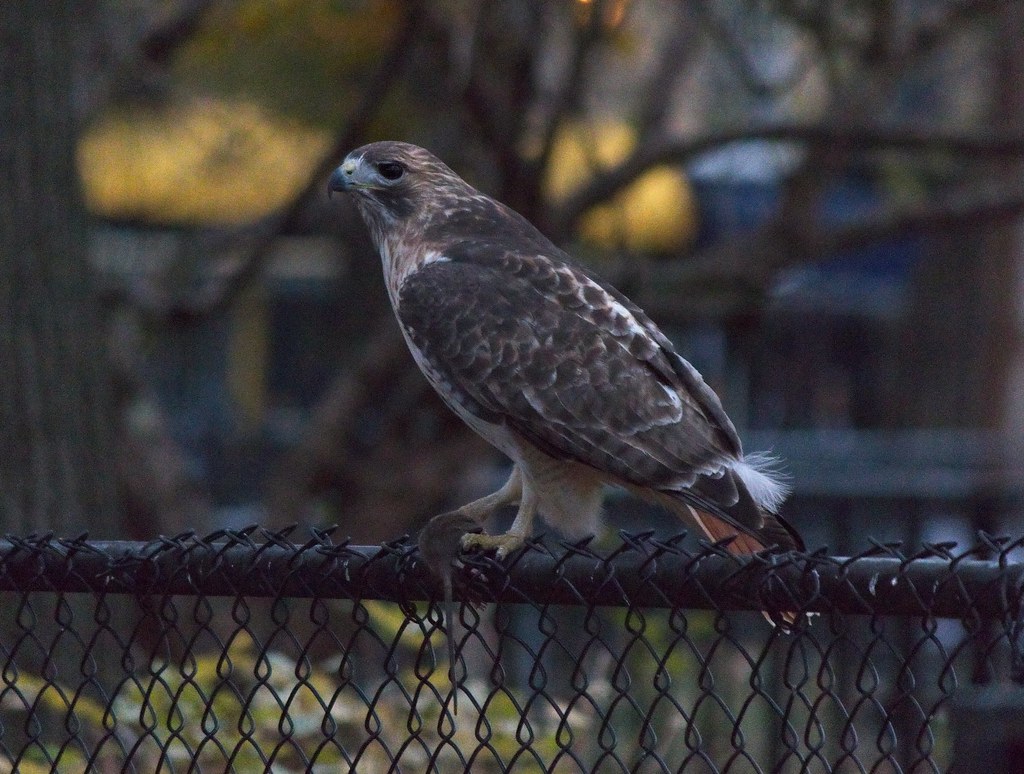 I didn't really see how it happened, but Christo took the rat (above) and flew it to the big tree near the chess tables.  As I was running to see where he went, he may have left the rat on a branch and then flew to a tree near the Temperance Fountain.  By the time I got there, N-D flew to the branch where he'd been, then took off after him.  A fellow hawk-watcher saw her drop something, so she may have been retrieving the rat.  Both hawks perched near the fountain and neither one had the rat by the time I caught up with them.

A short time later, N-D flew to the east side of the park, then to a fire escape on 10th Street where it seems she went to roost for the night. 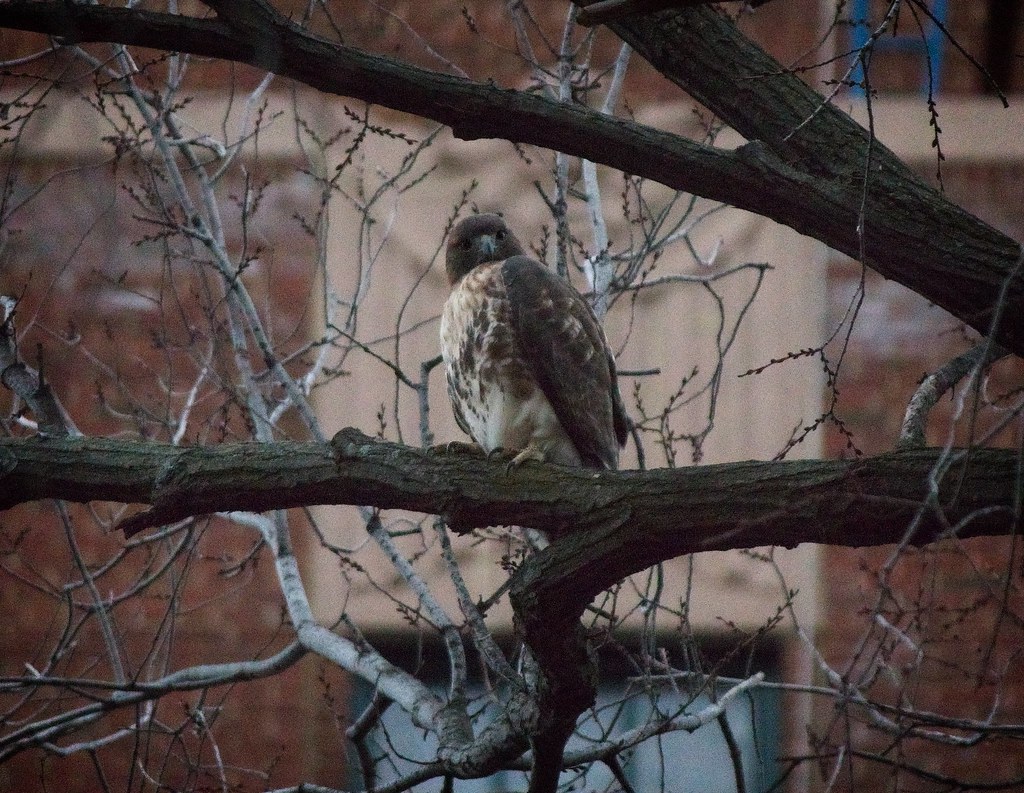 Meanwhile, I have no idea what Christo's is thinking... 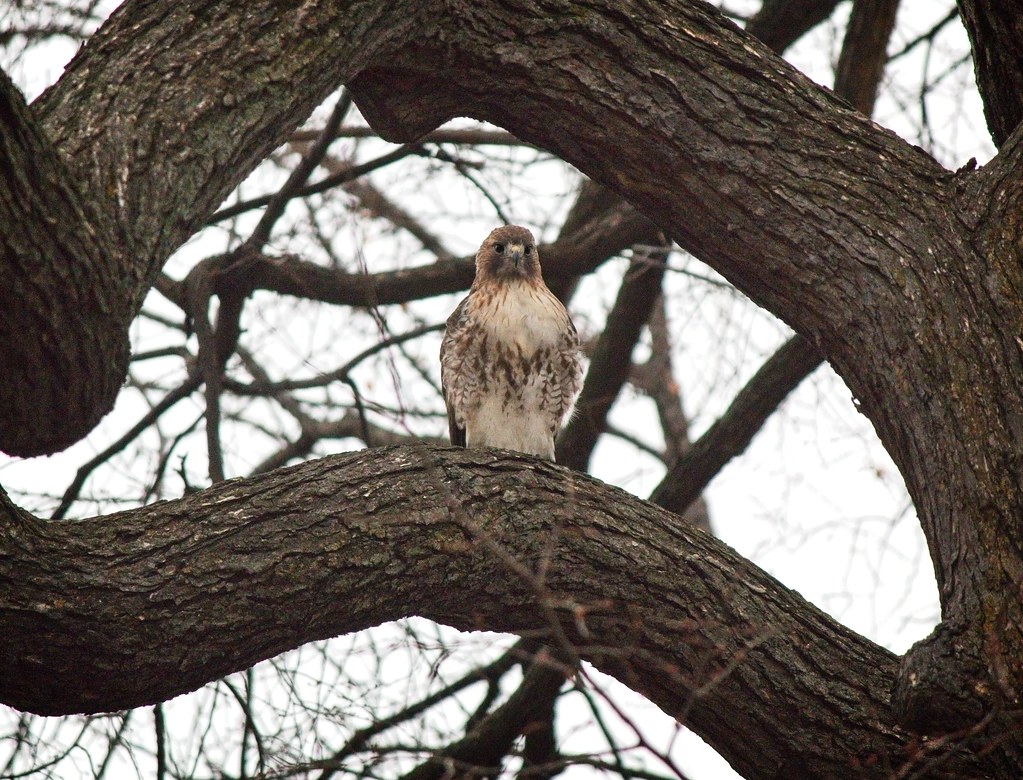 Red-tails mate for life and the good news is Dora is alive.  She will be released back into the park when she is healed, but that could take some time.  What will happen at that time remains to be seen.  I'm hoping everything will work out as it should.