Sunrise and sunset with red-tails, Christo and Amelia, and a Cooper's hawk

As dawn broke on a recent cold morning, I found myself in Tompkins Square Park where red-tailed Christo was still groggily perched in his night roosting spot. He was all fluffed up and seemed surprised to see me. 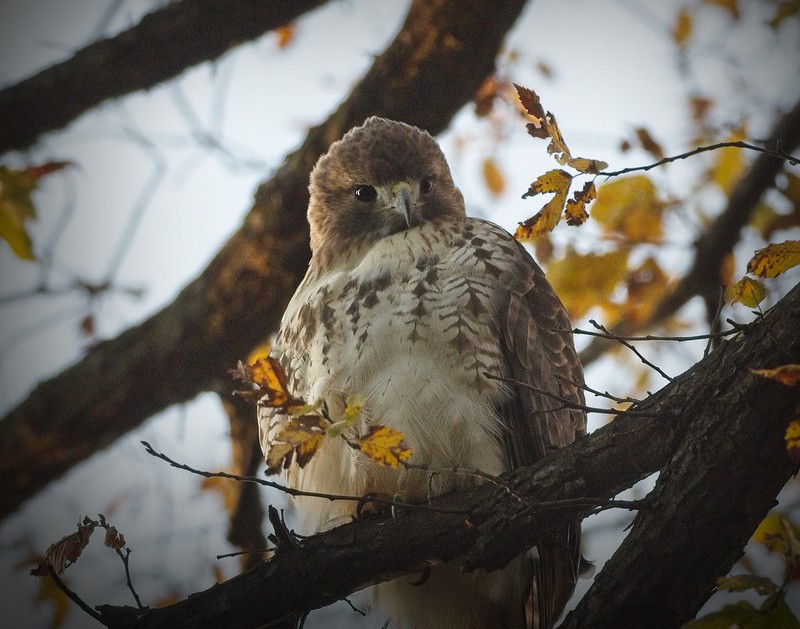 What are YOU doing here so early? 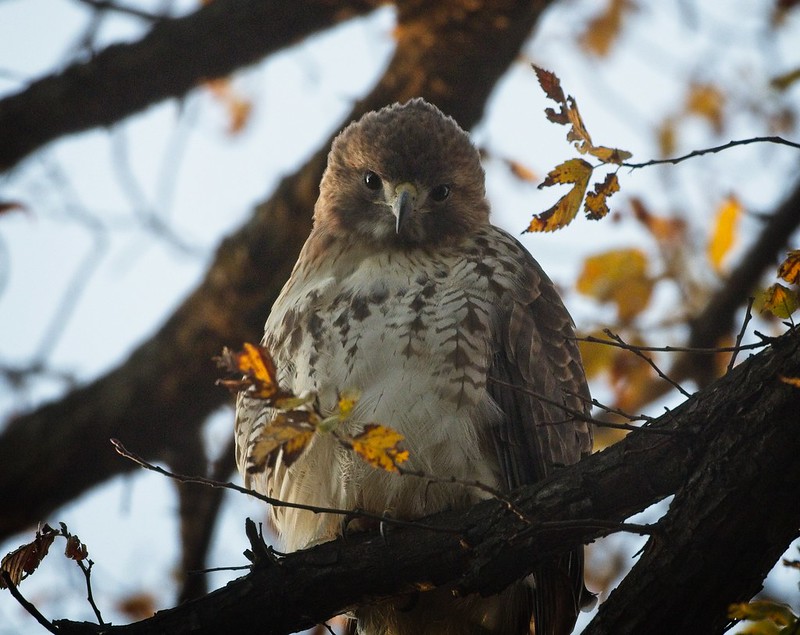 As the sun streamed down E 9th Street, Christo soaked it in from a tree on the east side of the park. 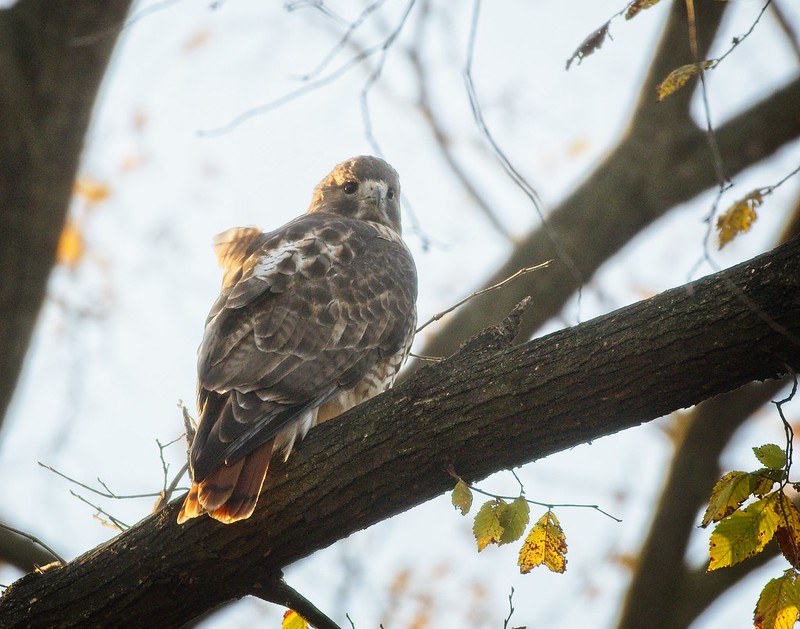 Meanwhile, Amelia caught the early rays from the highest branch in the park. I don't know where she roosts at night, but no matter how early I get to the park in the morning, she's already there. 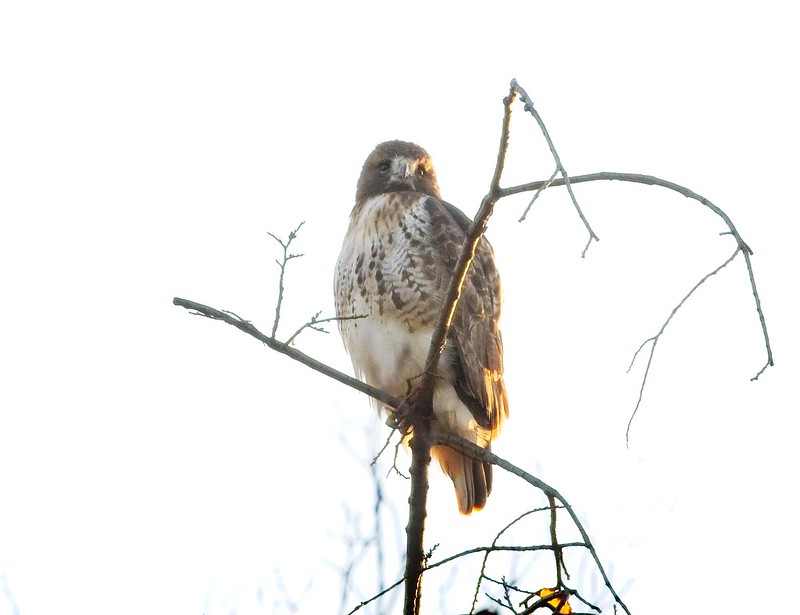 A short while later, Christo and Amelia perched together on the cross of St Nicholas of Myra on Avenue A and watched the pigeons make their morning commute into the park. 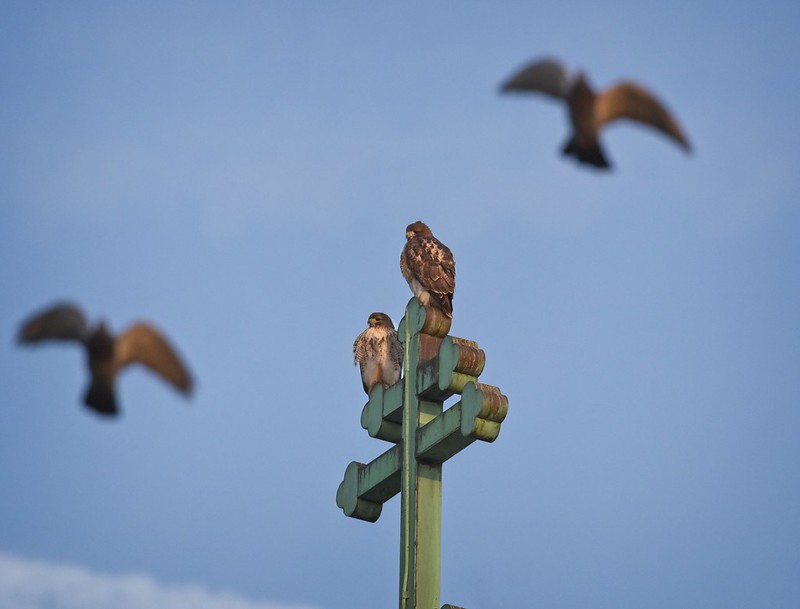 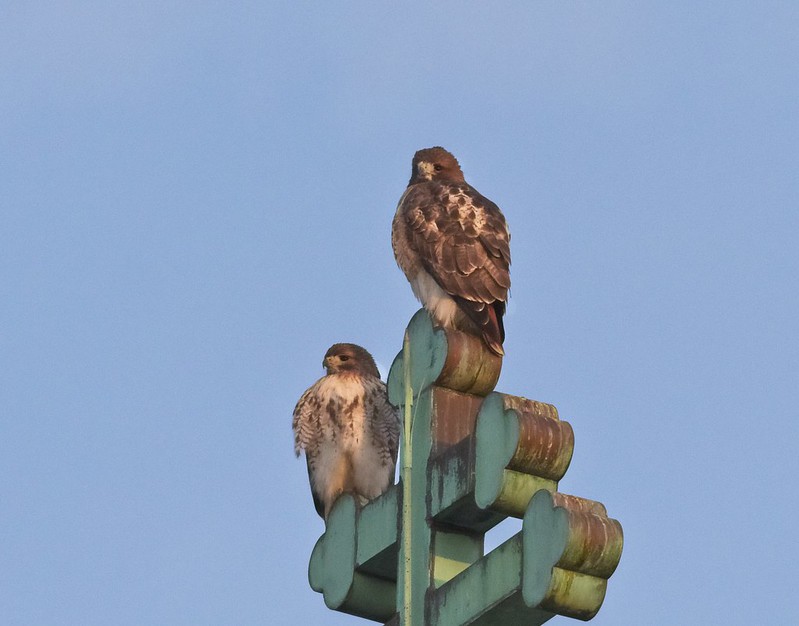 Someone else in the neighborhood has been out and about early in the mornings. This beautiful adult Cooper's hawk has been spotted several times in recent weeks between Tompkins Square and the Bowery. 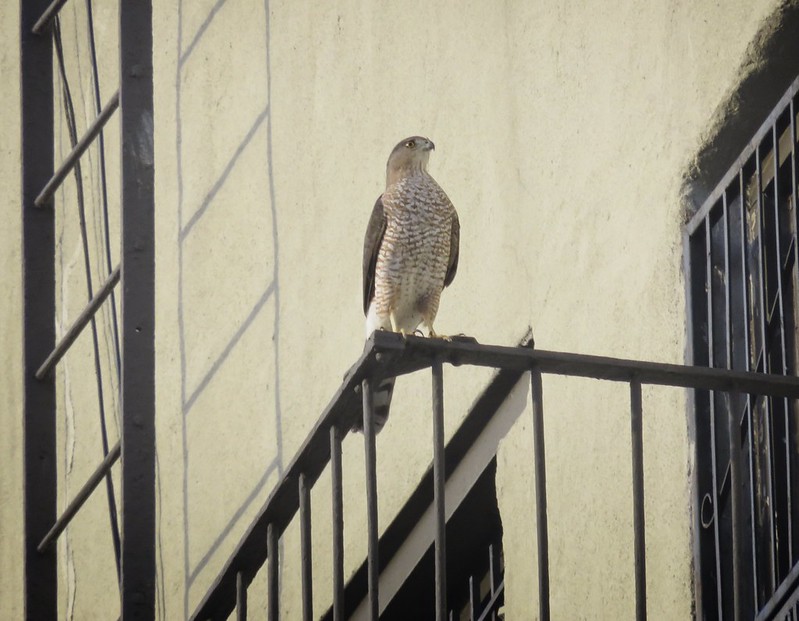 As I was walking along E 6th Street last Friday morning, the Cooper's swooped down in front of me and tried unsuccessfully to catch a breakfast pigeon. 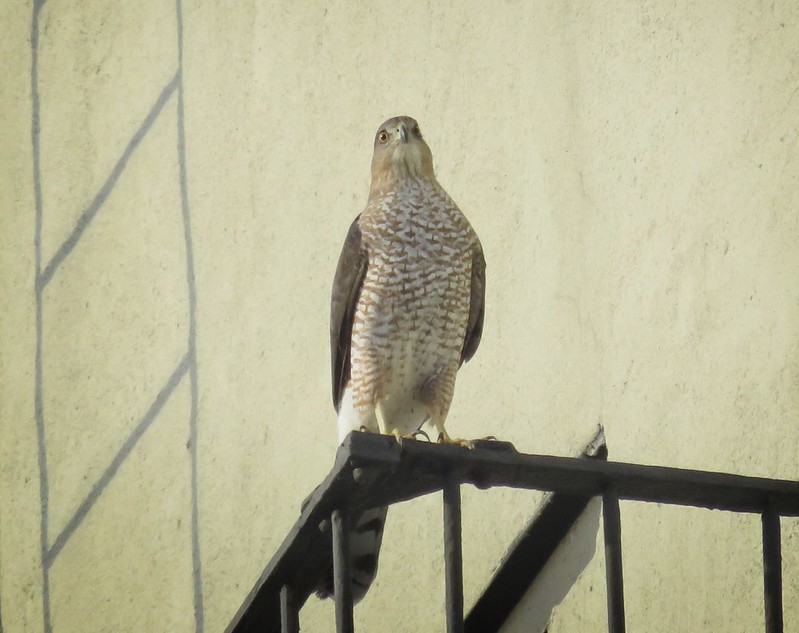 The hawk regrouped on a fire escape long enough for me to take some video:

As East Village hawks can be found at sunrise, they can also be found at sunset. This is usually the easiest time to spot them as they either make one last hunting trip for dinner in the park, or they finish off the day watching the sun go down from one of their favorite perches. Three of their most popular lookout spots are church crosses: St Nicholas of Myra on Avenue A & E 10th Street, St Brigid's on Avenue B & E 8th Street, and Most Holy Redeemer on E 3rd Street and Avenue A. You have a good chance of spotting one or both hawks on the crosses as evening falls. 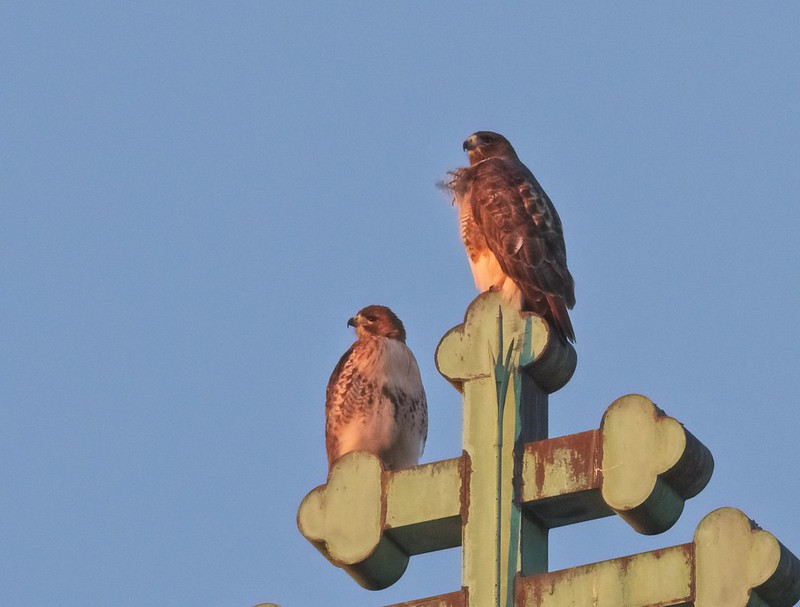 I've been trying to capture the hawks posing in the fall foliage before all the colorful leaves disappear. Christo cooperated for the camera on an otherwise dreary afternoon. 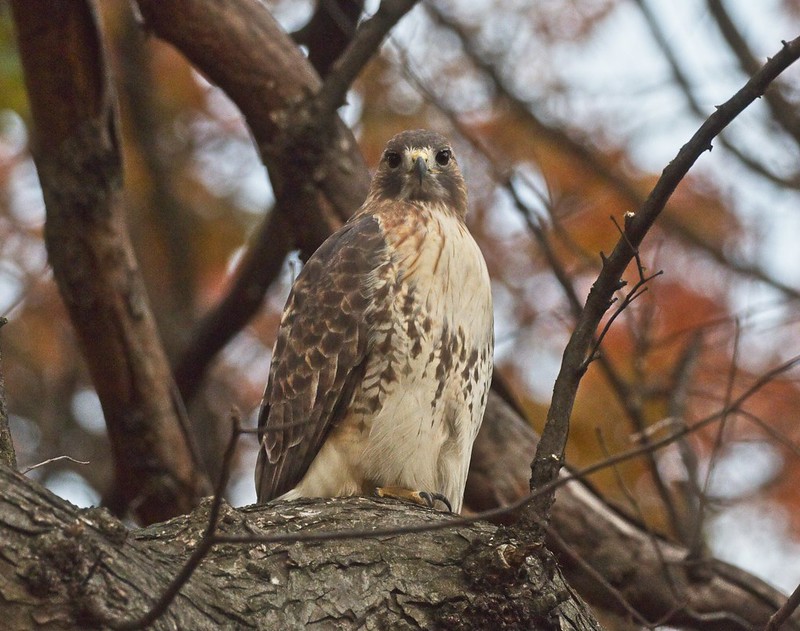 It's the time of year when we start seeing more hawks in the city and there have been several red-tails visiting the Lower East Side. This adult took a break from chasing pigeons by perching on an air-conditioner last weekend near Grand Street. 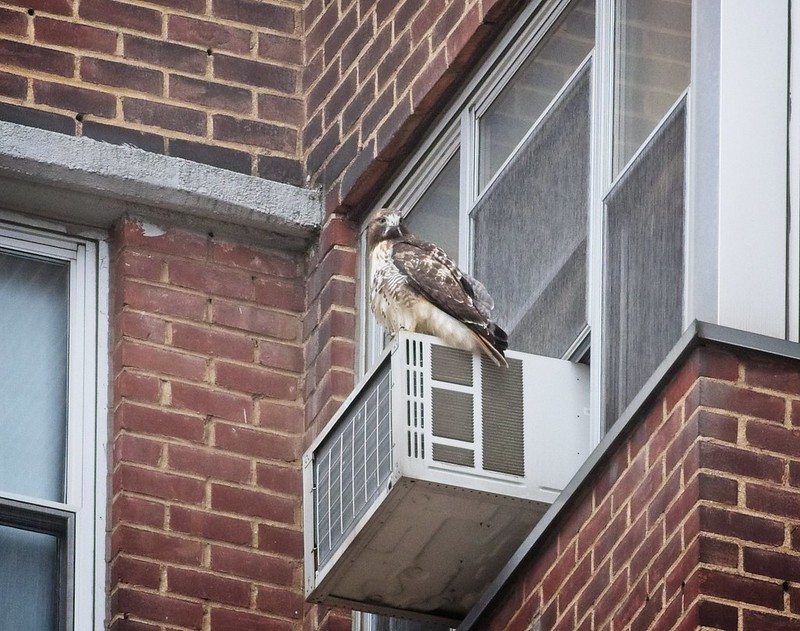 And this immature red-tail returned my gaze as I watched it soar over East River Park. It always thrills me to look up and see a hawk staring right back at me from a mile away. They see everything. 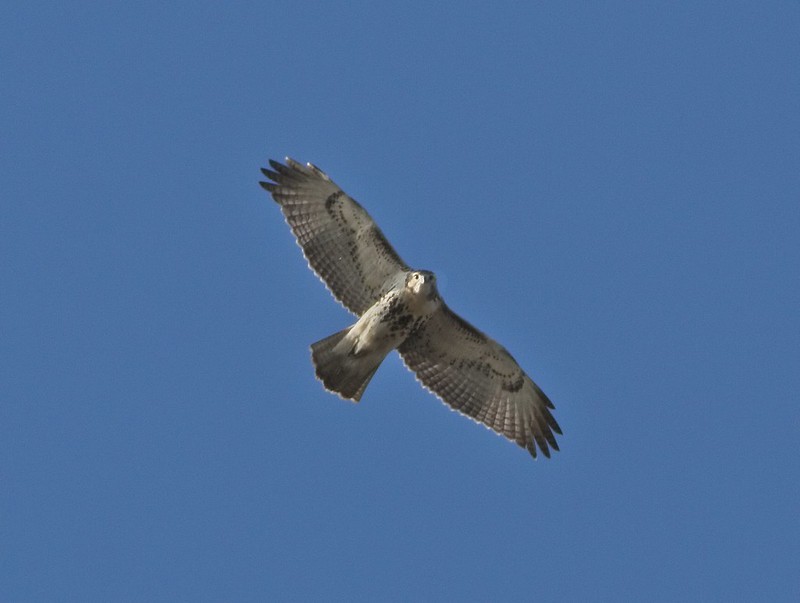