Until the terrorist attacks of 9/11/01, the most devastating catastrophe to affect New York City was that of the General Slocum Disaster on June 15, 1904.  Of the 1021 people killed, most were women and children, and the majority of them were from the East Village or, what was known then as Little Germany.

It was to be a fun day of sailing up the East River and picnicking on Long Island for over 1300 members of  St. Mark's Evangelical Lutheran Church on E. 6th Street.  But, what began as a sunny and promising day turned to ruin and utter heartbreak when (allegedly) a carelessly tossed match set the ship ablaze.  Although the Slocum was one of the most popular passenger vessels, there were never any fire drills, the lifeboats were painted to the decks and the life vests (made of cork) had been allowed to rot.  A lot has been written about who was at fault, but in short, the Captain was blamed and jailed.

One account tells of the Kircher family with three children, the youngest of whom could not swim.  Little Elsie was given the one life vest they had and her mother dropped into the water.  Mr Kircher relates what happened next:


"Thinking that the little girl would be perfectly safe with the preserver on, she lifted her and dropped her over the side. She waited for Elsie to come up.  But the child never appeared.  She had sunk as though a stone were tied to her." 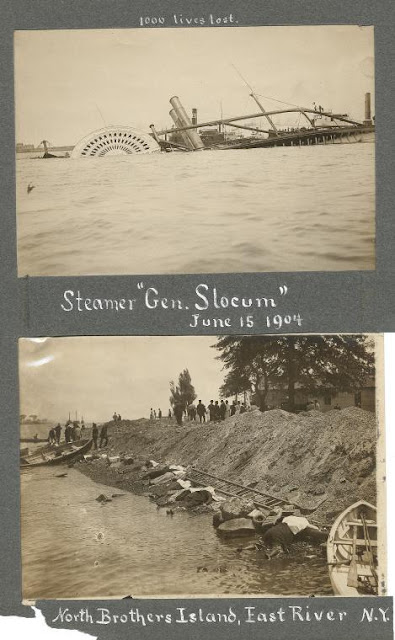 As bodies were collected, they were laid out, identified and embalmed in a temporary morgue on the pier at 26th Street. 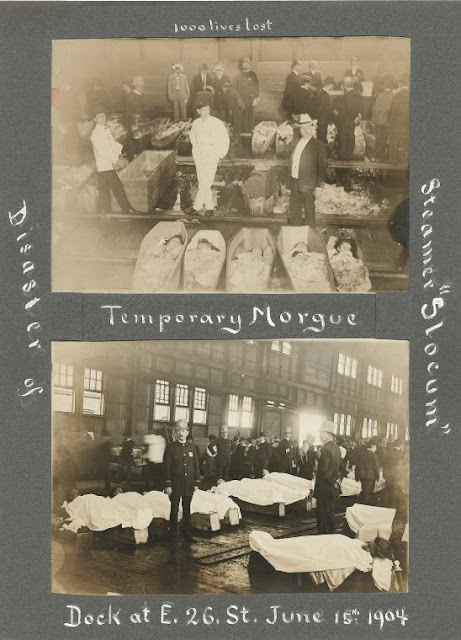 There were some heroes who rushed to save as many as they could.  At the same time - and I was shocked to discover this - the Slocum's sister ship, the Grand Republic, sailed right up to the wreckage at North Brother Island as divers searched for bodies, a lively crowd on board cheering and playing music.


". . . the Grand Republic was spotted coming up the river.  She was loaded to the guards with passengers, her flags were flying gayly, and the strains of music from her band floated lightly over the waters.

The grapplers for bodies paused in their work, hardly believing that they saw and heard alright.  It looked like the ghost of the Slocum coming over the same horror-strewn course."

The Grand Republic's captain apparently ignored all orders from the police to stop, and kept on at full speed.


". . . just as the spot was being passed where the Slocum was beached, the excursionists waived their handkerchiefs and set up a cheer that echoed far out over the island and was heard on the New York shore, where a mournful knot of people, still hoping to hear something from missing ones, were gathered."

A police inspector who was standing onshore, yelling at the pilot to slow his engines, said, "I thought I knew human nature, but people are more callous than even I thought them."

Some of the Slocum's victims were never recovered and, due to the fire and water, many bodies were never identified.  Dynamite was used to try and dredge the river bottom and bring up those who had sunk, but the blasting seemed to only be effective for shocking fish.  Among the many heart-wrenching accounts of the disaster, I cam across this article which describes identifying people by their jewelry:


"From the hand of a ten-year-old girl was taken a ring with one pearl and four green stones, a second ring set with a blue stone, and a third ring set with a red stone.  In addition there were taken from this body a pair of red stone earrings, a silver medal marked "first prize," and a neck chain with a heart attached."

It's difficult for me to fathom to the loss.  Not only were entire families wiped out, but the whole neighborhood was emotionally destroyed.  This amazing photo shows a funeral procession on Avenue A and 6th Street for unidentified victims.  I think the photographer is atop the buildings on the NE corner, looking SW at what is now Benny's Burritos. 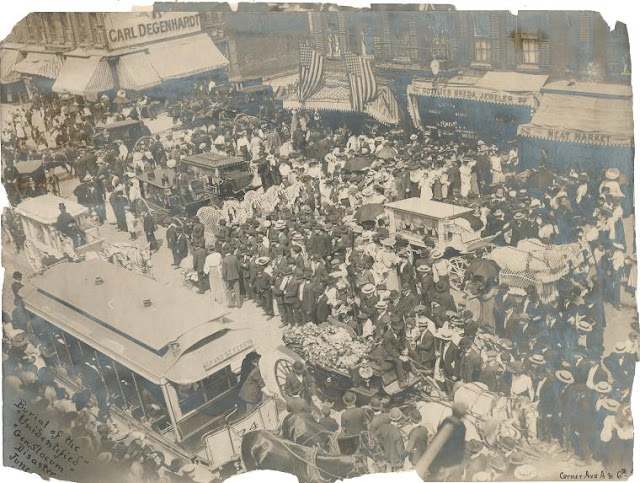 Those left in Little Germany couldn't bear to live there any longer and many left the neighborhood.  As Douglas Martin notes in this NY Times article, "The old place had become haunted with memories of black crepe on door after door and 200 hearses rolling slowly across the Williamsburg Bridge."

You can see a list of the victims sorted by address here.  Note how many were from the same household.

At the one-year anniversary of the disaster, a memorial monument was unveiled by Adella Liebenow, who, at six months, was the youngest Slocum survivor.  She would go on to be the last living survivor as well, passing away at age 100.  The ceremony was an emotional one.  Charles Dersch, President of the Organization of the General Slocum Survivors, made a moving speech.


"For a year from this day we have known what it means to be without our loved ones.  They were taken from us by the greed of those who loved money more than lives.  The innocents died horrible deaths to fill the purses of the greedy."


"This is the anniversary of the day of death - a beautiful day like this . . . The sky was as blue as it is to-day, and the hearts that have ceased to beat were filled with the hope of a happy day . . . the love of money caused the loss of life.  The steward tried to swim ashore with his pockets filled with heavy coin.  He was drowned."

The crew of the Slocum never bothered to have a fire drill.