Red in tooth and claw

After striking out trying to catch squirrels on Sunday afternoon, one of the Tompkins Square hawk fledglings succeeded in catching and killing a pigeon.  I'm not with the hawks 24/7 to confirm this, but as far as I know, this was the first pigeon catch for this hawk.  And, judging by the inexperienced way the hawk dealt with ushering the pigeon out of this realm, I am inclined to think this was the hawk's first time.

Warning: there is a gruesome photo further down the page.

Around 4:30pm, the hawk nabbed the pigeon on the path near the Avenue A playground. 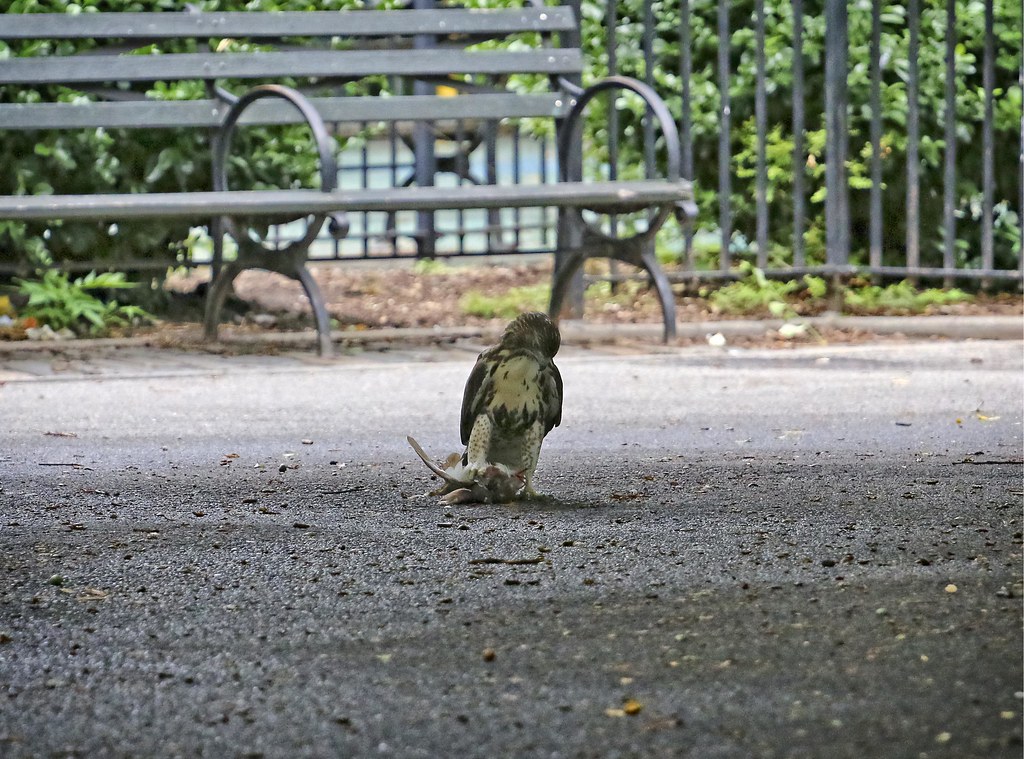 It remained on the path for a few seconds before flying the pigeon into a nearby tree. 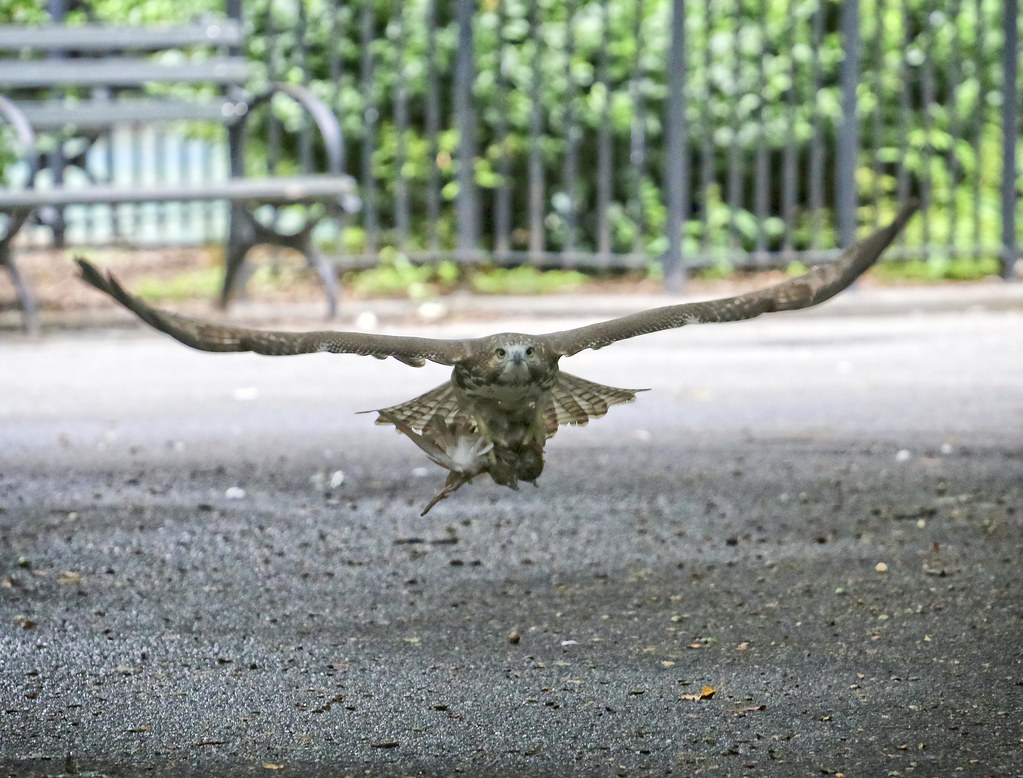 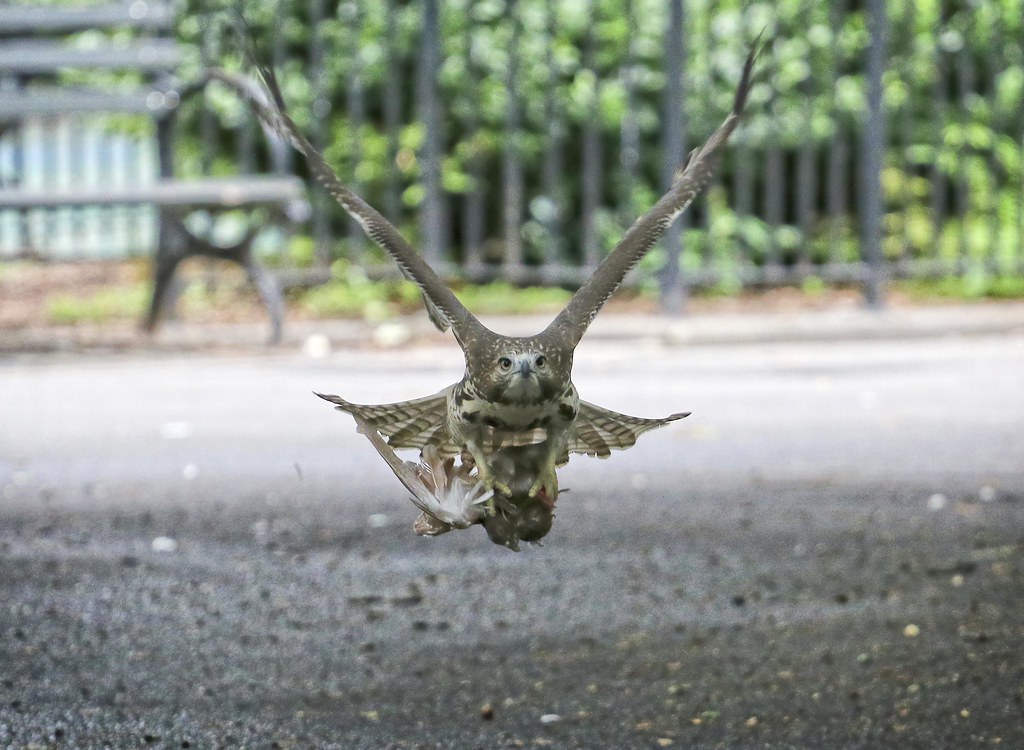 That branch wasn't suitable, so the hawk took the pigeon over to a tree next to the farmers market along Avenue A.  When it landed, it became obvious to onlookers that the pigeon was still alive. 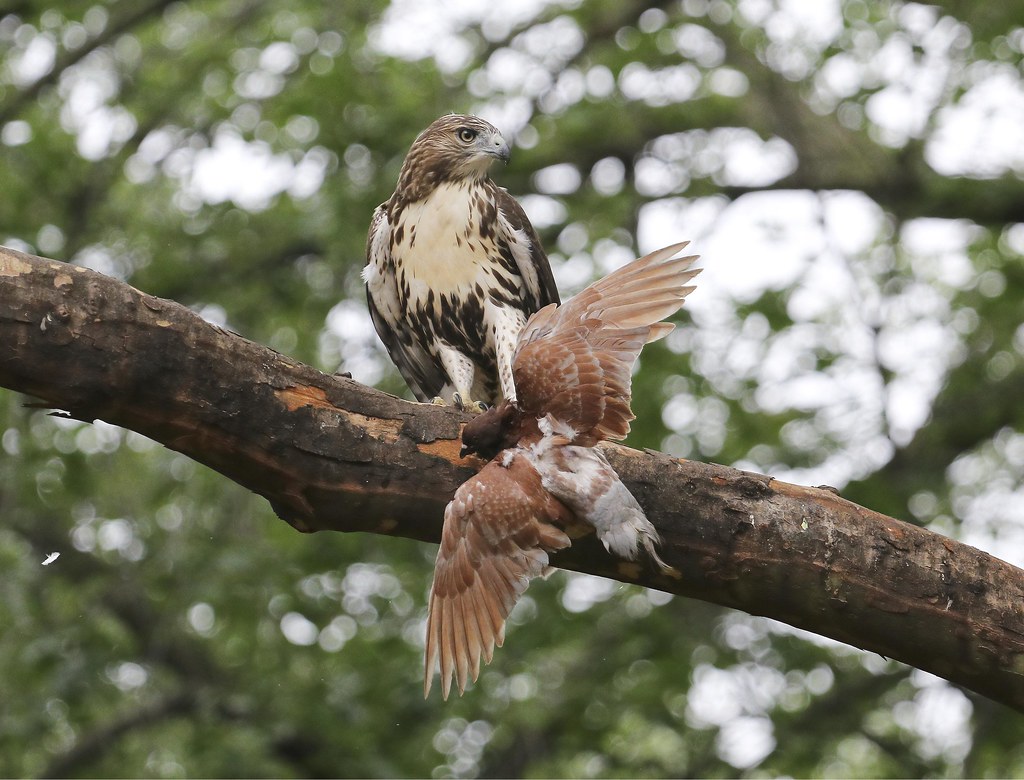 The pigeon struggled for several agonizing minutes.  The hawk had the pigeon by the back of the neck and couldn't manage to quickly put it out of its misery without loosening its grip. 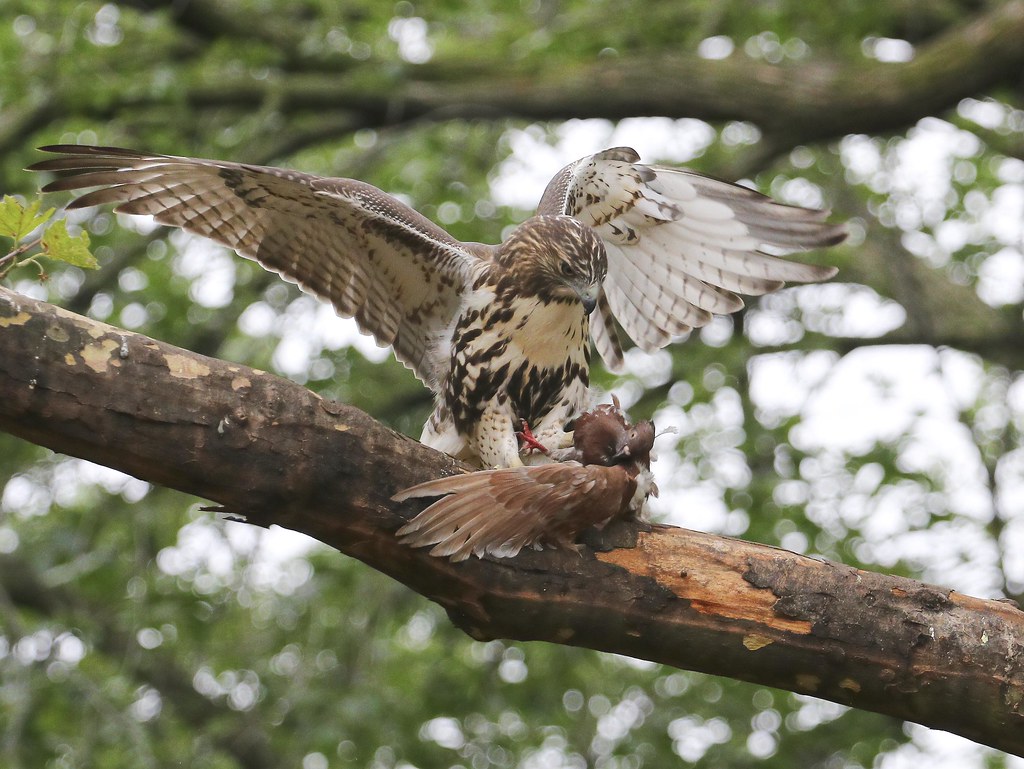 This was hard for me to watch as I like pigeons and it's difficult to see one suffer.  But, this is how the hawk learns.  With practice, it will accomplish this task quickly and efficiently.  Even if the pigeon had been able to escape, it was mortally wounded and would not have survived. 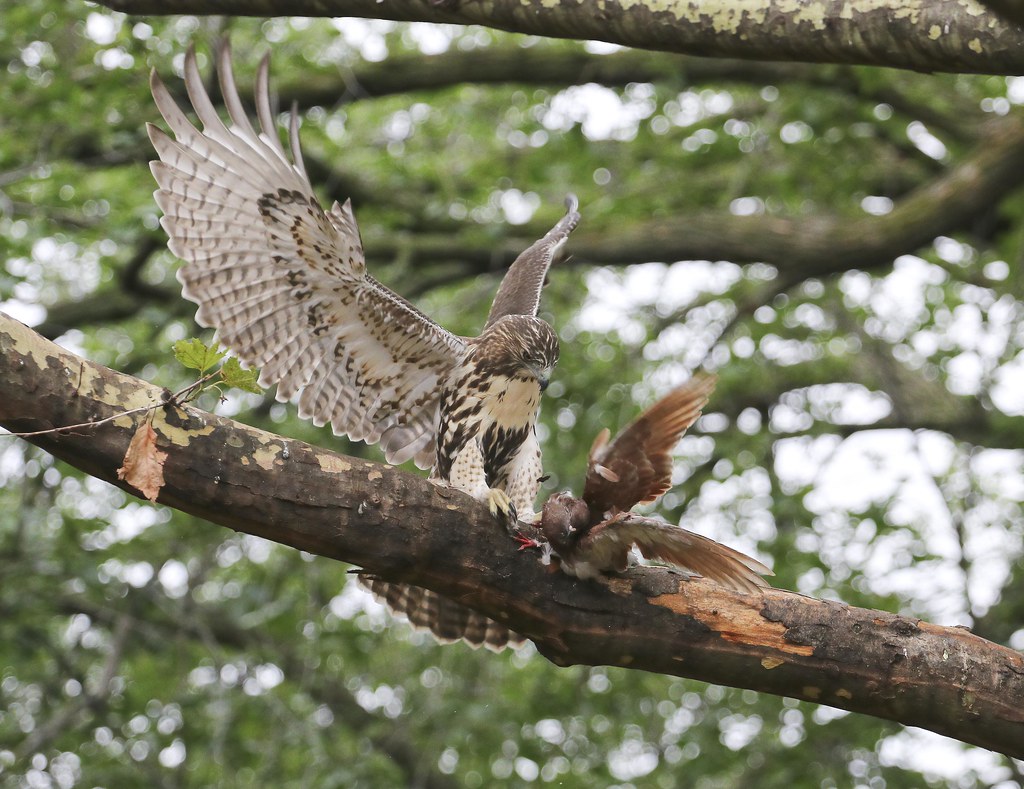 Finally, the struggle came to an end. 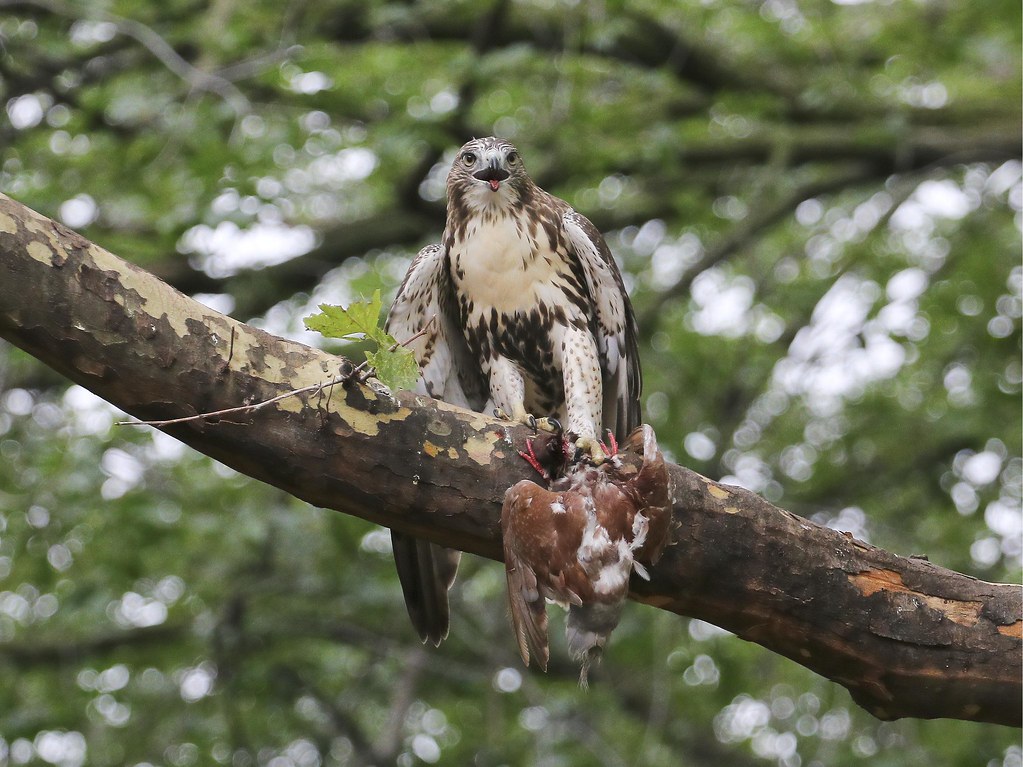 Meanwhile, the hawk's sibling flew to a nearby branch and looked on as the first hawk enjoyed its tasty meal. 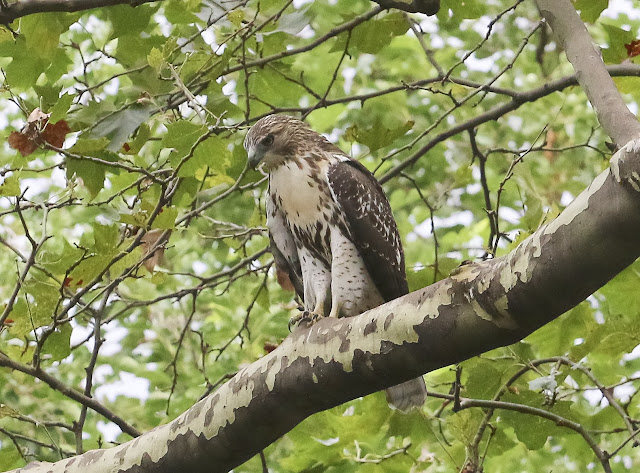 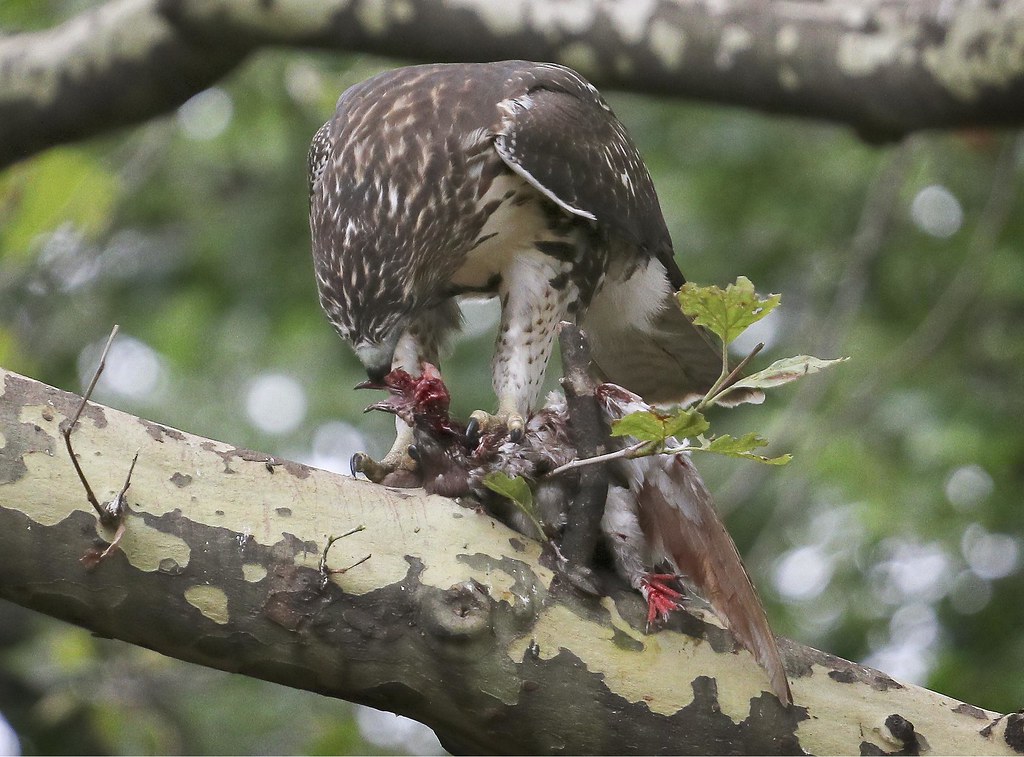 After eating a portion of the pigeon, the hawk took the remains to the big elm tree just north of the chess tables. 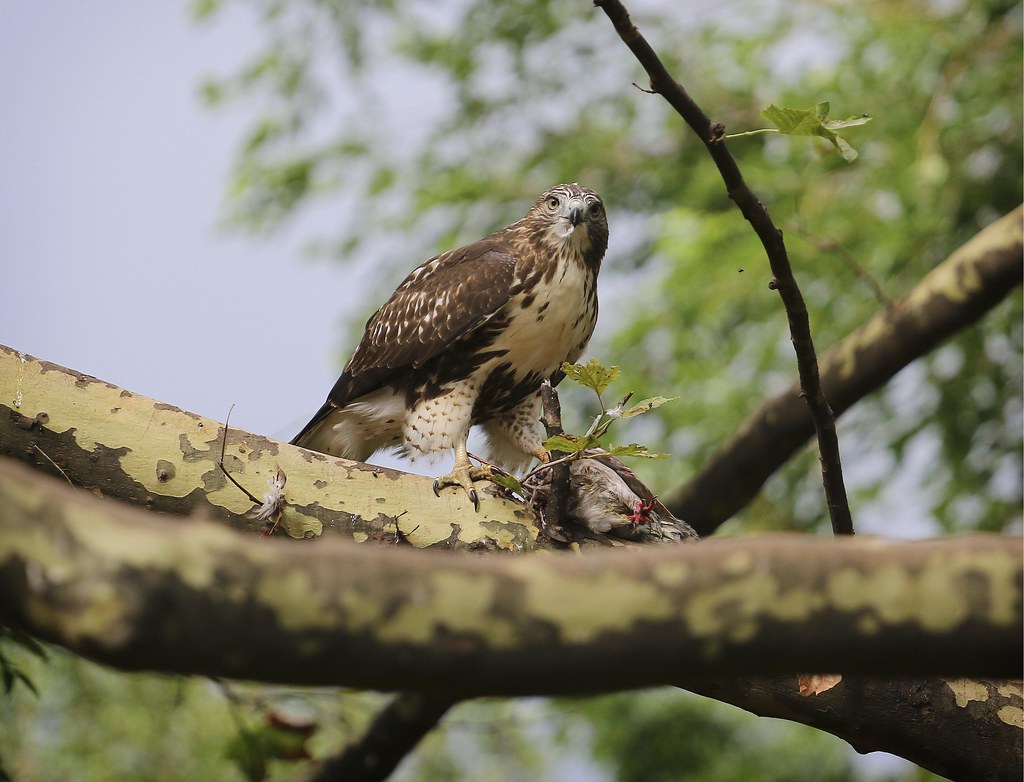 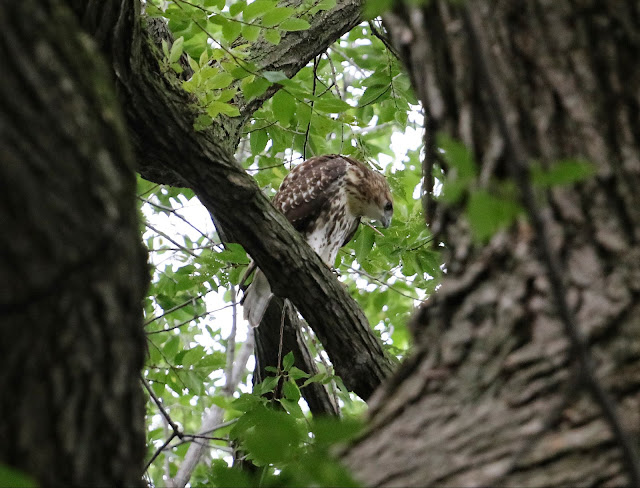 Suddenly, the second hawk swooped down and stole the pigeon! 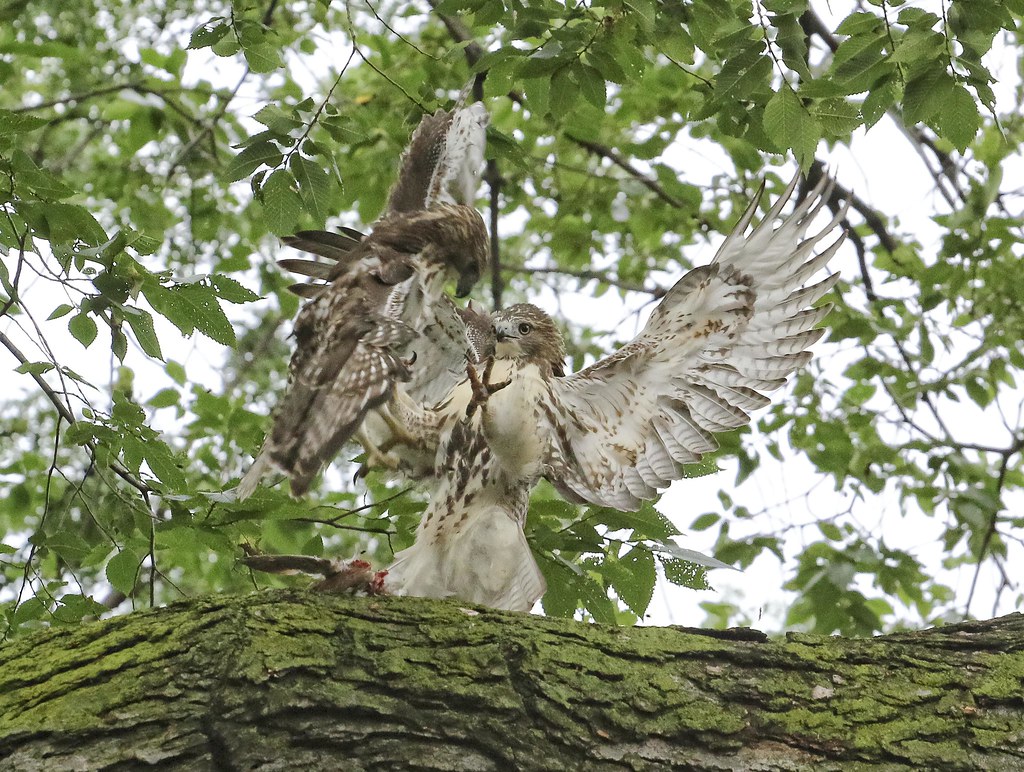 The first hawk jumped back as the second hawk flew in front of it and grabbed dinner right off the branch. 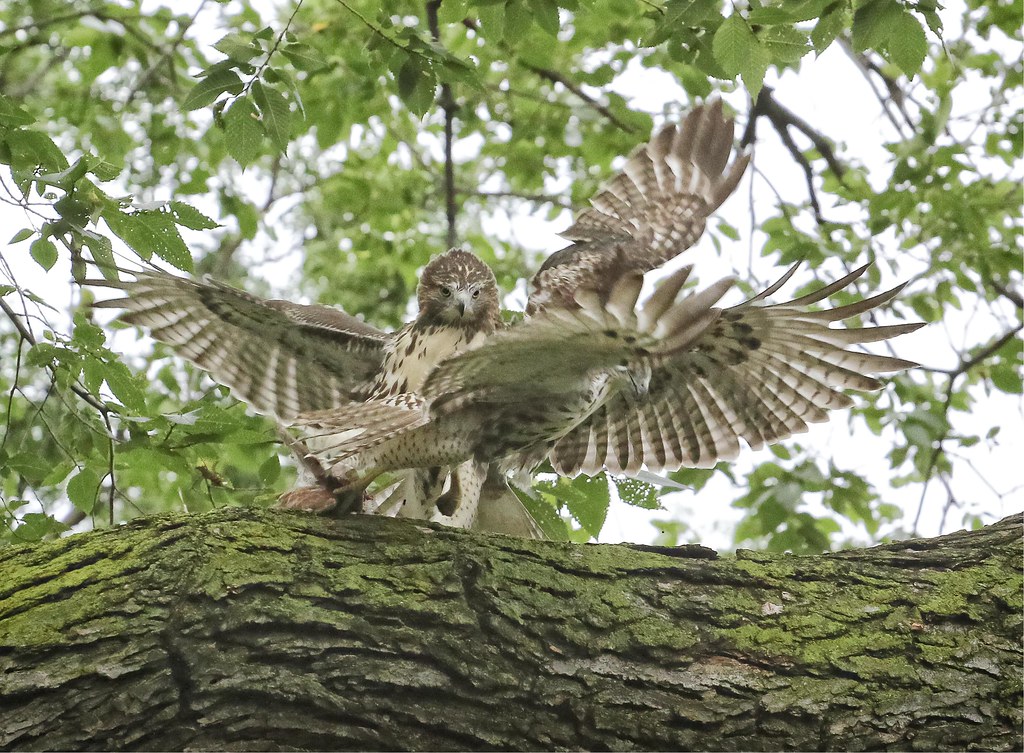 The thief then took its prize to the big tree west of the Temperance Fountain where it ate heartily (note the pigeon feathers on the branch below). 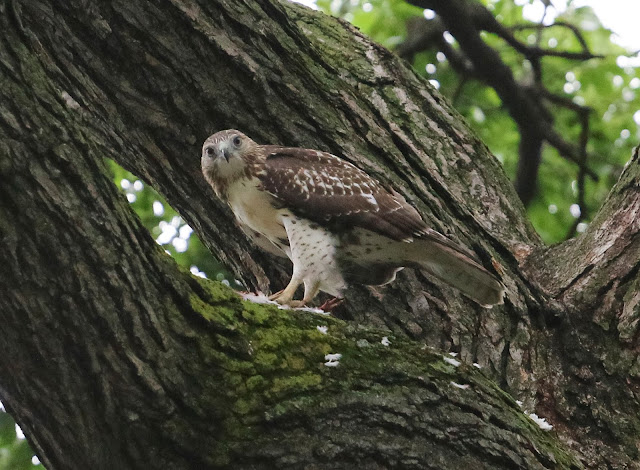 The theft incident didn't seem all that hostile to me.  The second hawk was definitely watching its sibling eat and probably just saw it as another food provider.  Why catch prey when brother/sister can do all the work?  When the food was stolen, the first hawk didn't seem particularly upset.  It cleaned its beak, called a couple of times, then chased the thief to the big tree, but didn't pursue the matter after that.  I guess it had enough to eat.

The whole sequence was fascinating to watch and I'm happy to finally see at least one of the kids feeding themselves.  Urban Hawks has some video of all the action here.