Catching up with the native Tompkins fledgling

The weather over the last several days has been unsettled - hot, humid, rainy, dark - making hawk-watching a bit challenging.

On Friday, Dora and Christo perched together in a locust on the east side of the park.  It was late in the day, which would normally be dinner time, but both hawks seemed very relaxed and Christo did not appear to be in hunting mode. 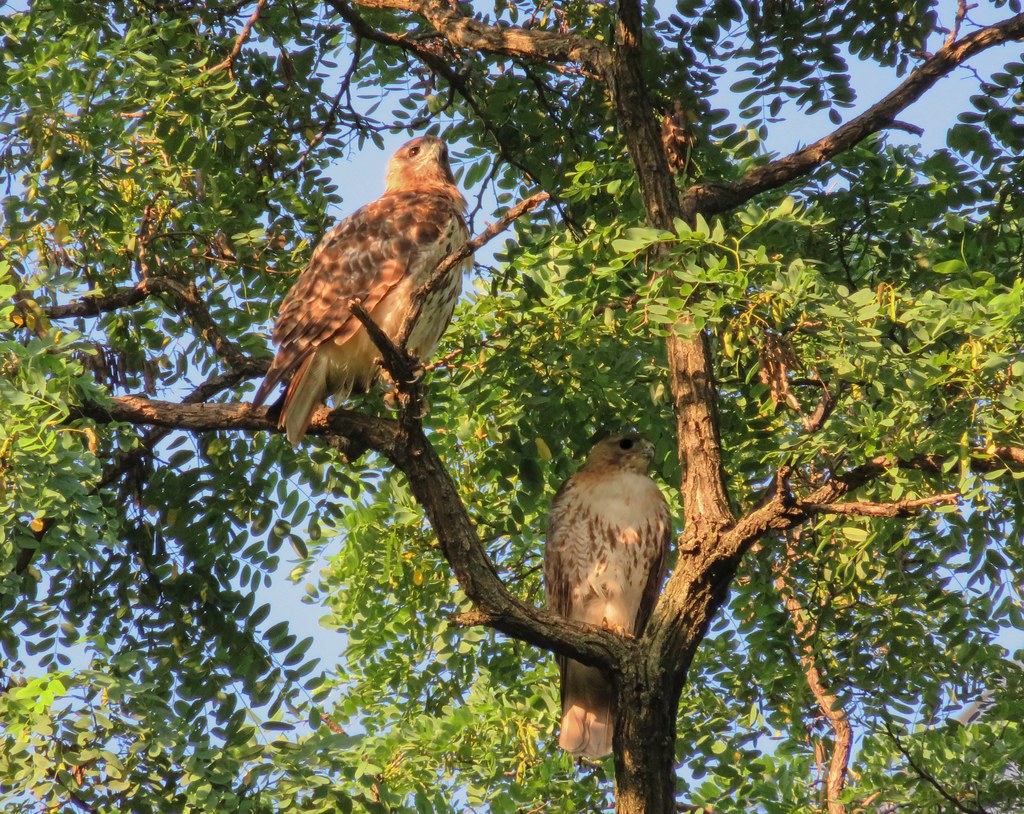 I've been seeing Christo and Dora together on Village View at 1st Avenue and 4th Street a lot lately. It's always been a popular perch for them and it seems they're spending more time there and at Most Holy Redeemer church on 3rd Street, and less time in the park.

Both fledglings are still in/around Tompkins Square.  When I've seen them, Flatbush has been on the west side of the park while Ten occupies the east.  They don't seem to be interested in hanging out together and I have to wonder if it could be because they are not from the same nest.  They do come together when food is present, otherwise, they seem to be leading somewhat separate lives.

I don't have any photos of Flatbush this week, but he's doing fine and has been spotted exploring the buildings along Avenue A, on the west side of the park.

I've spent most of my time with Ten, who is growing up fast and displays great confidence.  She seems to get a second wind around sunset, and has been pretty active after the sun goes down. 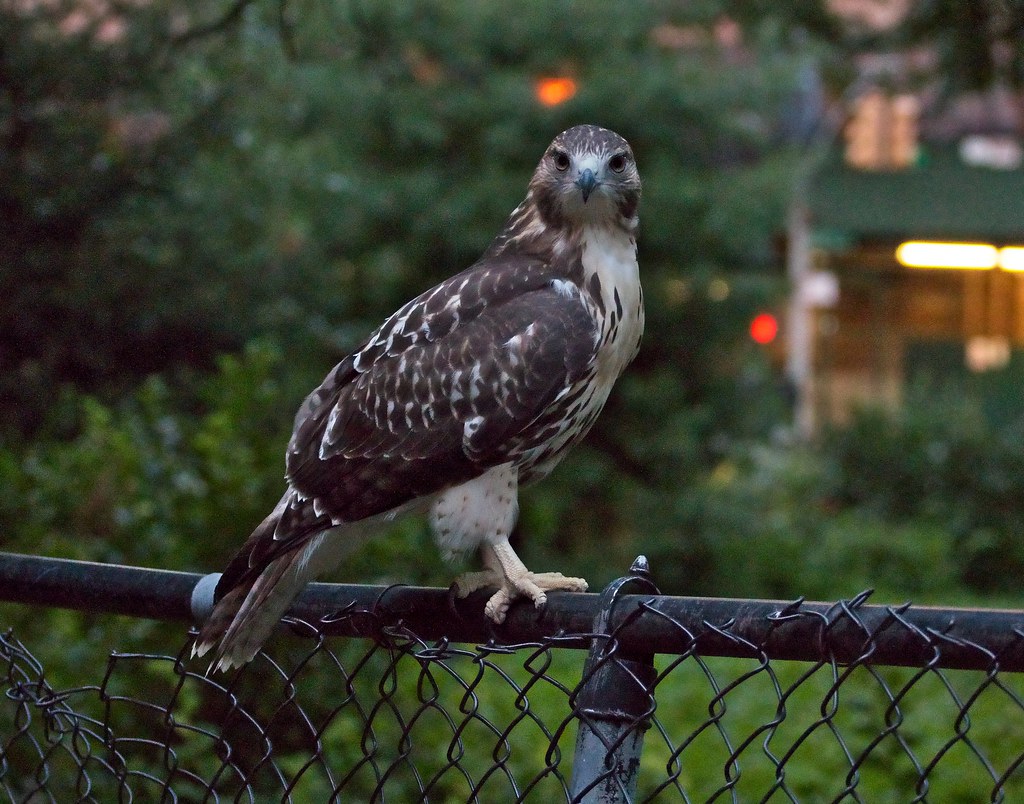 Below, Ten plays around in the grass and peels bark off a cherry tree. 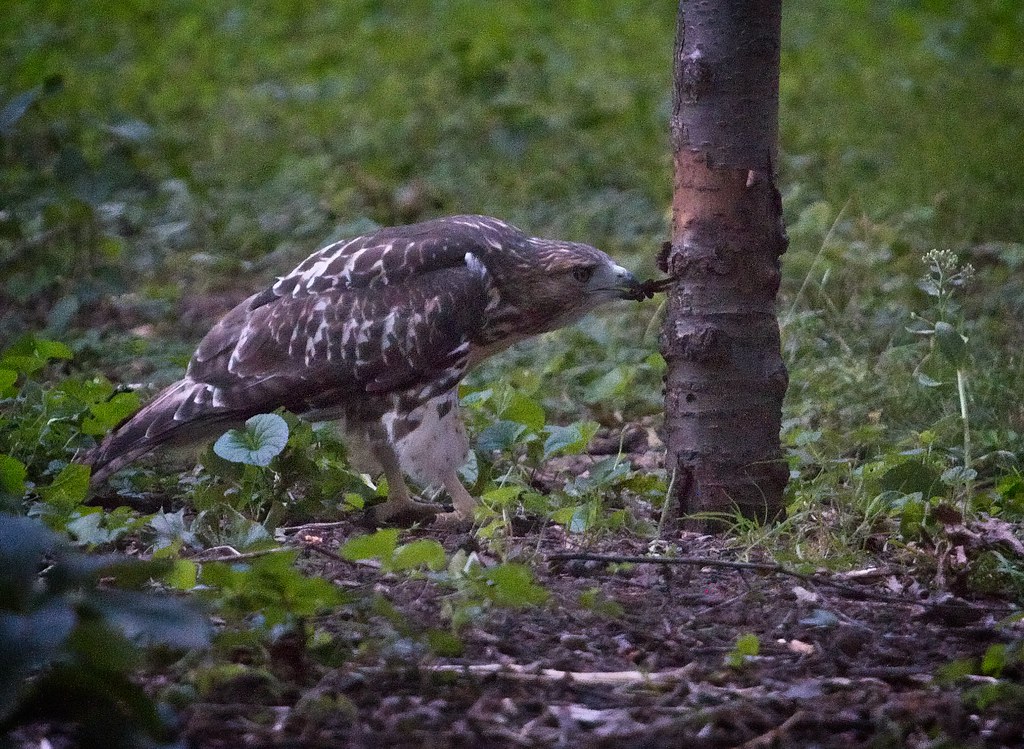 After dark, she perched on a fence under a light pole near the basketball courts. 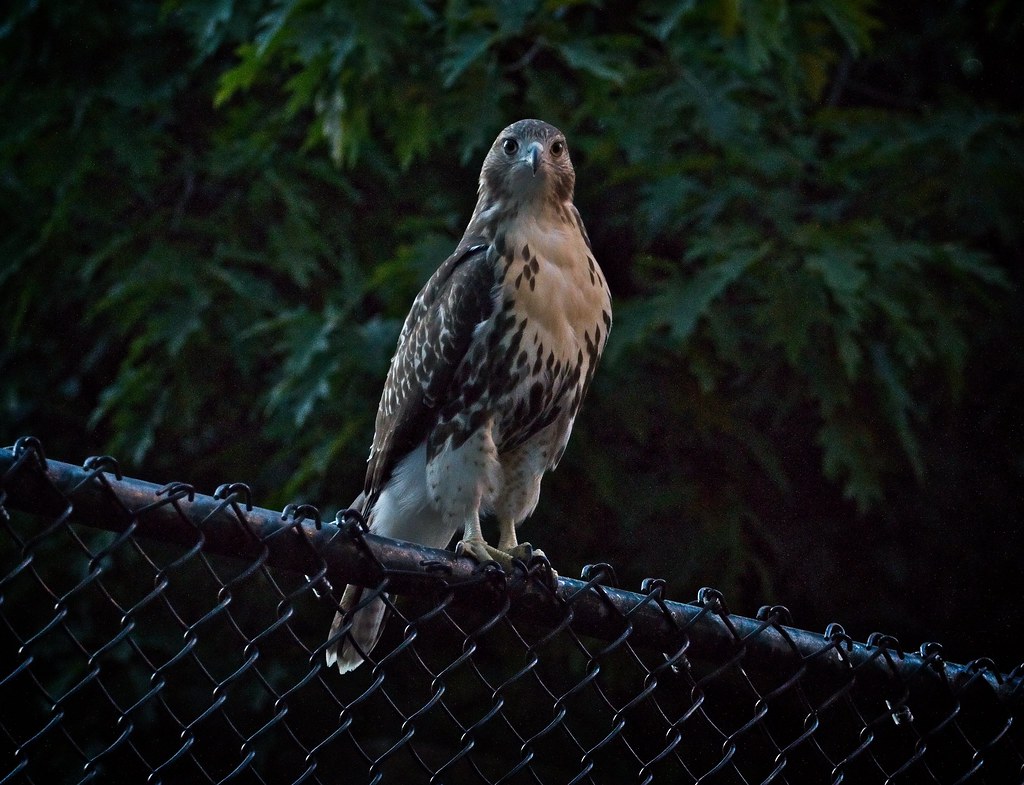 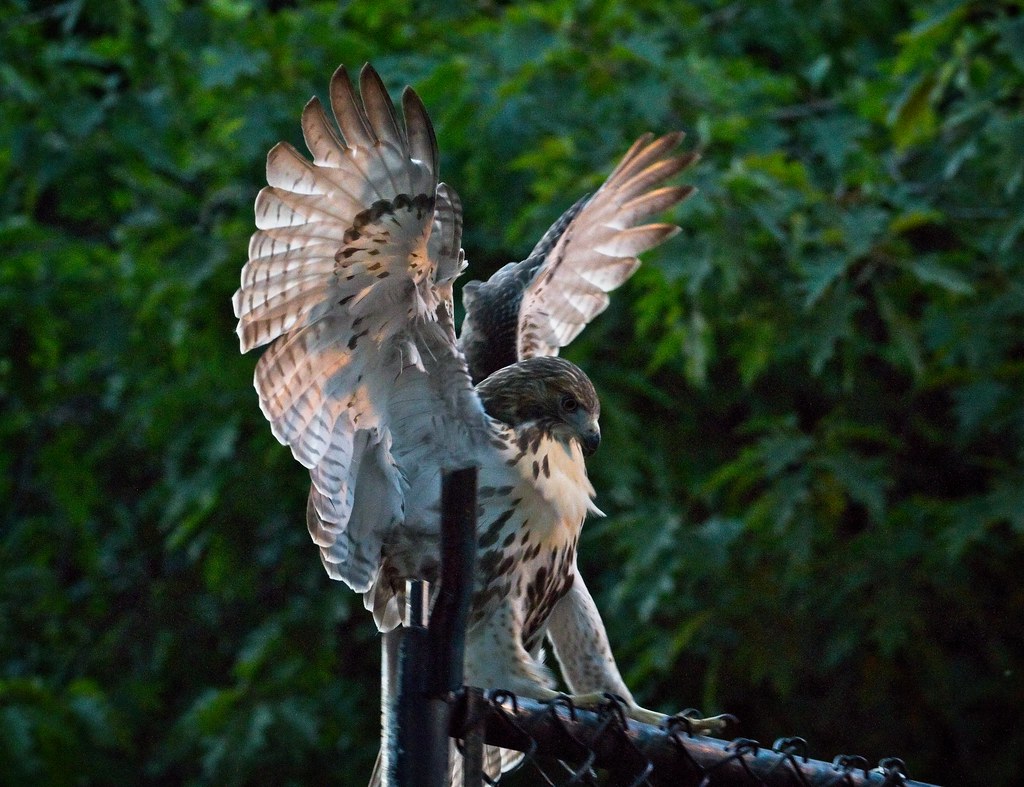 Most of my hawk photos this season have been taken at/after sunset.  I don't remember so much hawk activity after dark in previous years.  When I did this post on Christo hunting after dark in 2014, it was a novelty to see him out and about after dusk.  This year, it's been the norm.

With that in mind, I was happy to find Ten prowling around a fire escape on 7th Street near Avenue B during daylight hours last Saturday. 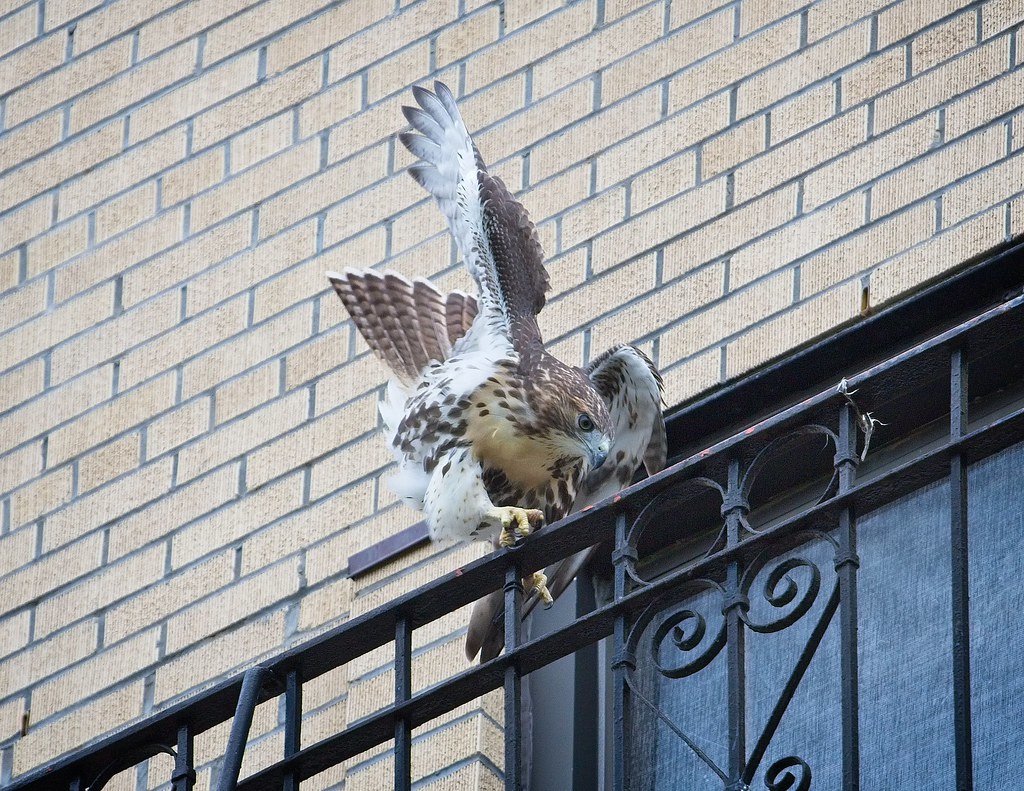 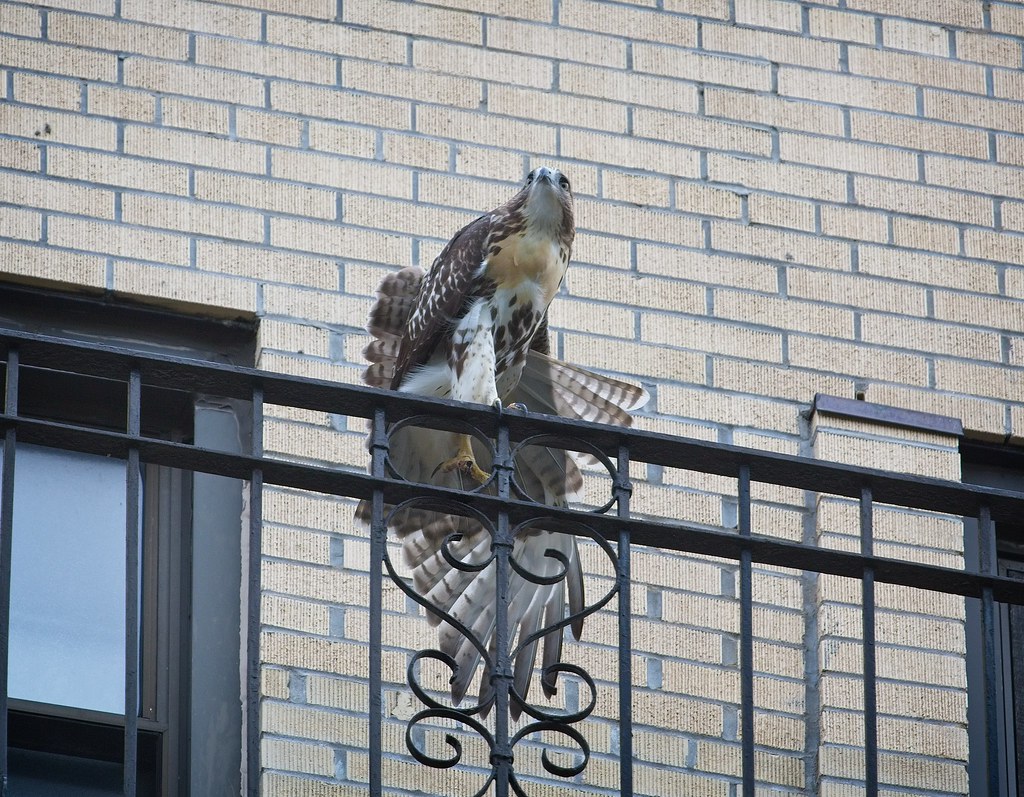 The resident blue jays are always on her case. 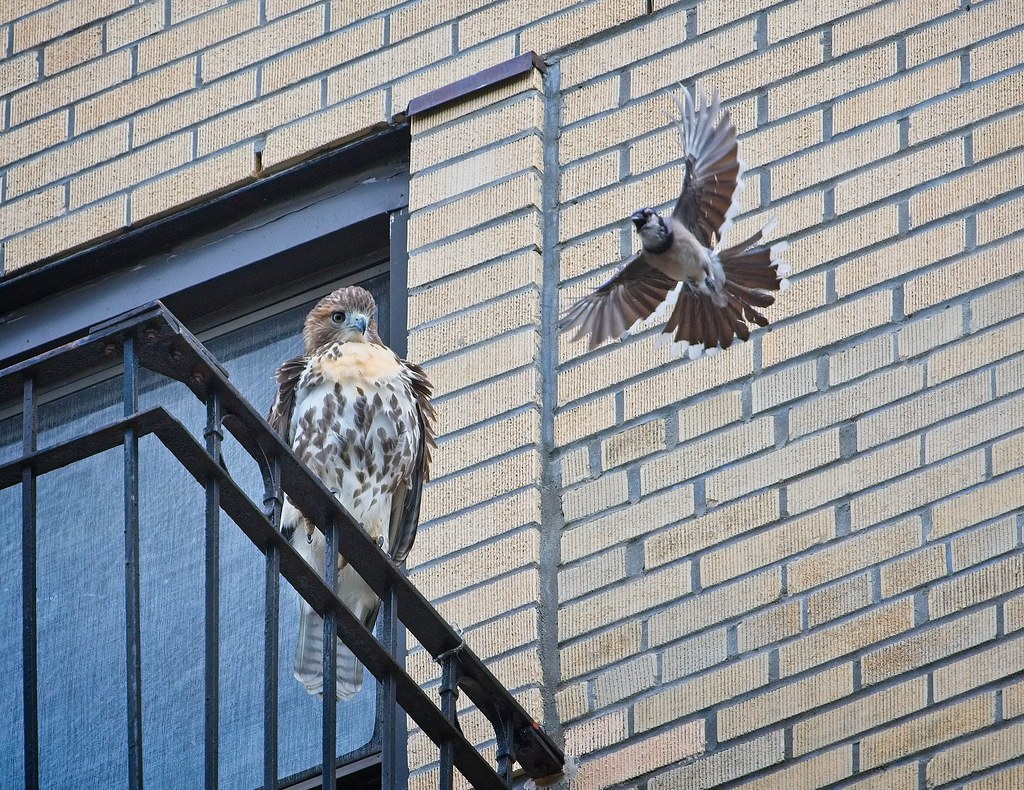 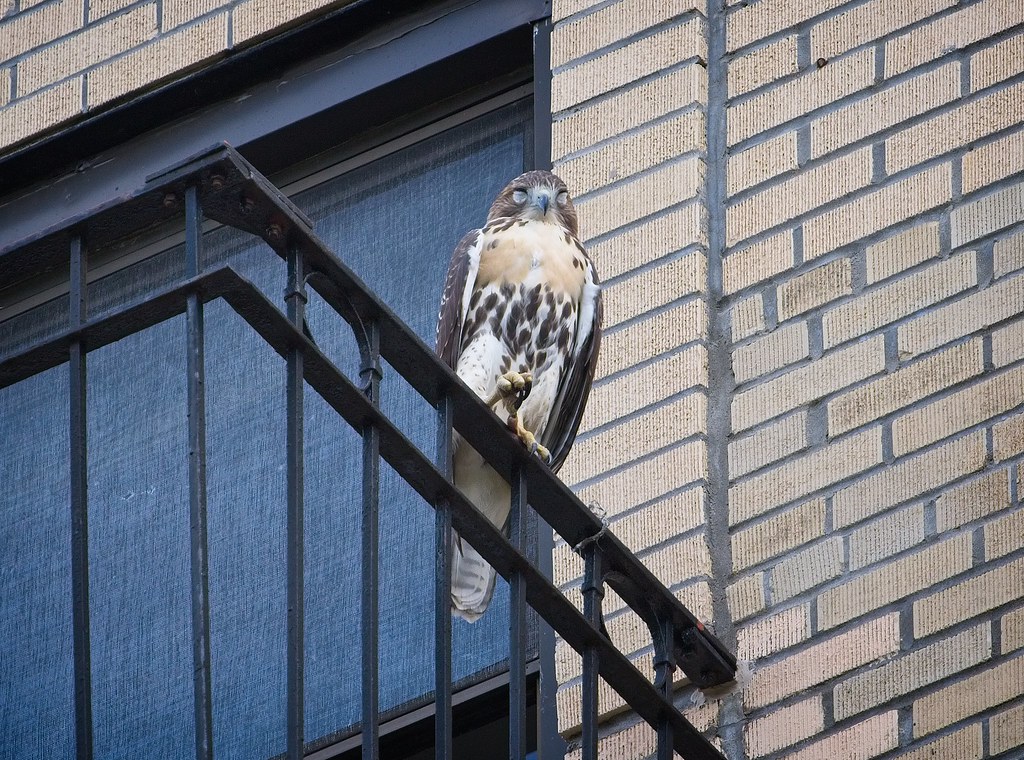 The fledgling stayed on the fire escape for almost five hours.  At one point, she laid down on the platform of the fire escape and took another nap.  Around 6pm, she perked up... 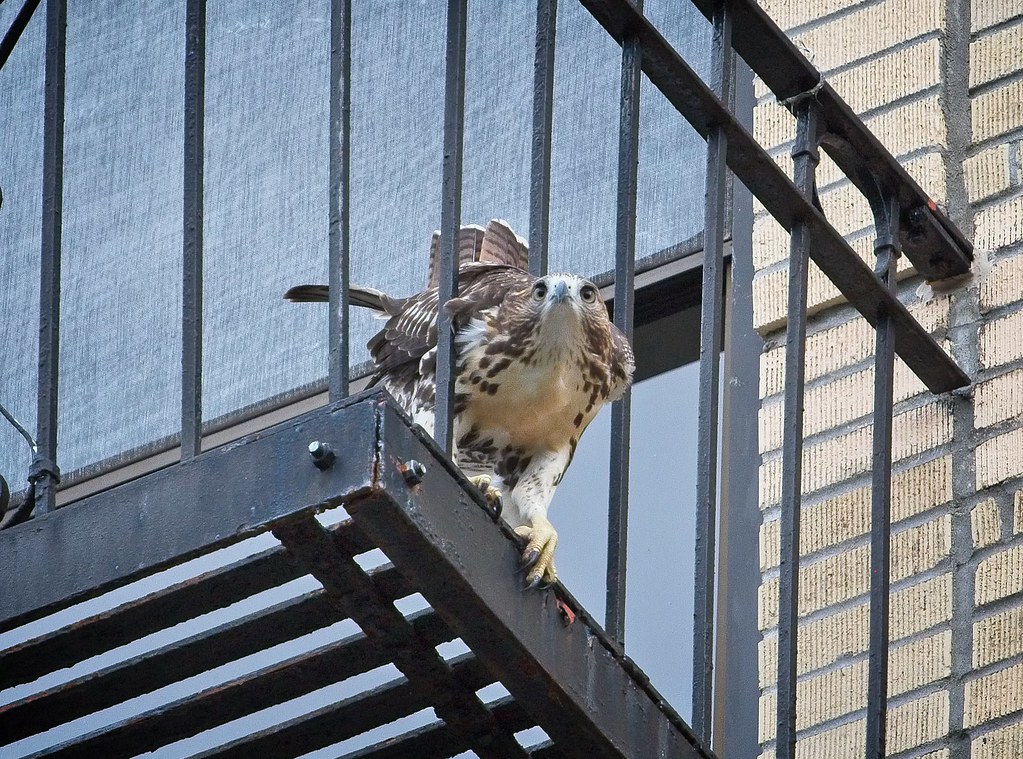 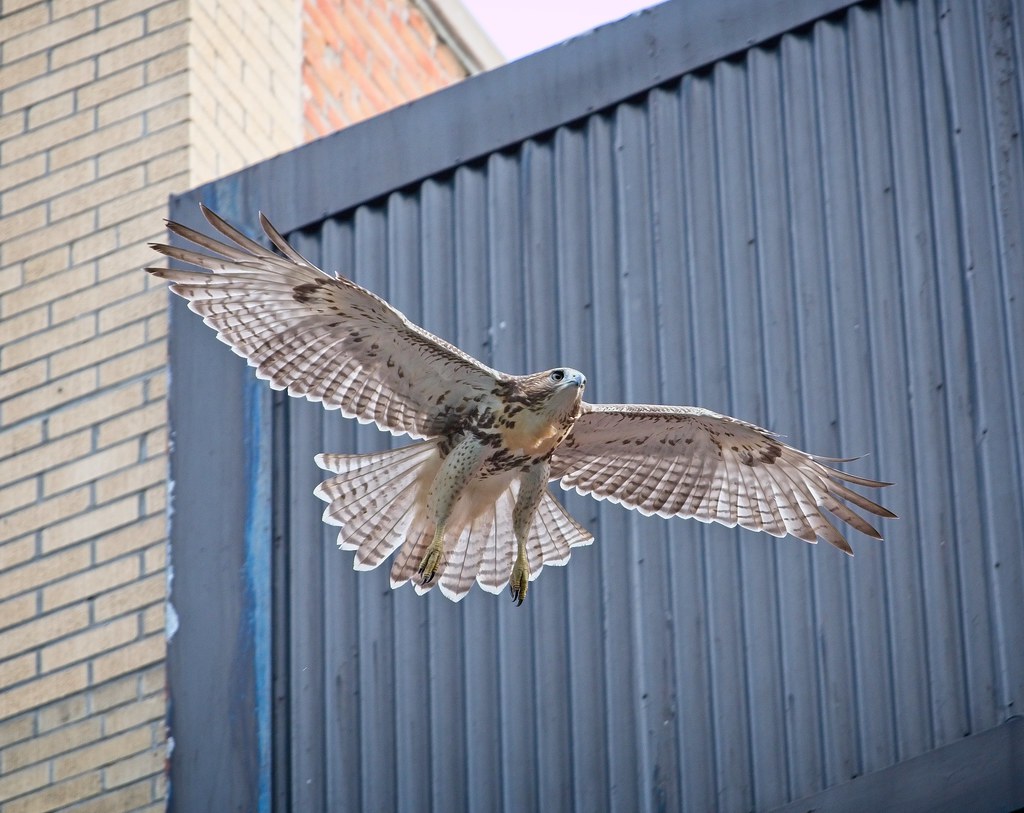 After a brief flight around the park, she ended up on St Brigid's church on Avenue B and 8th Street. 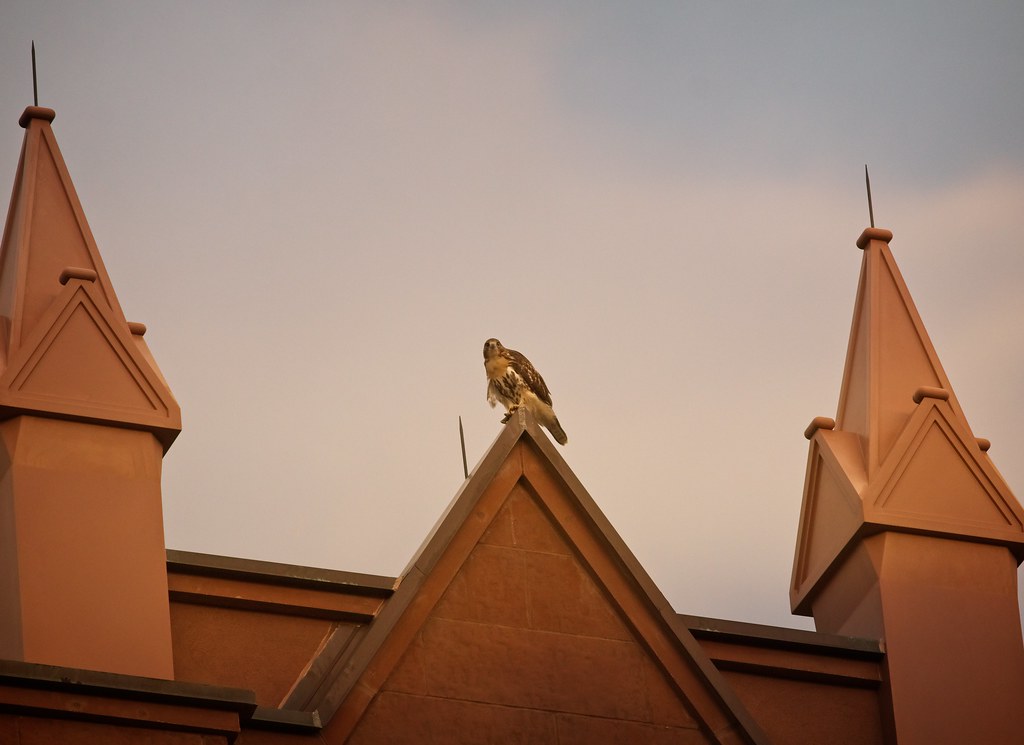 Again with the harassment! 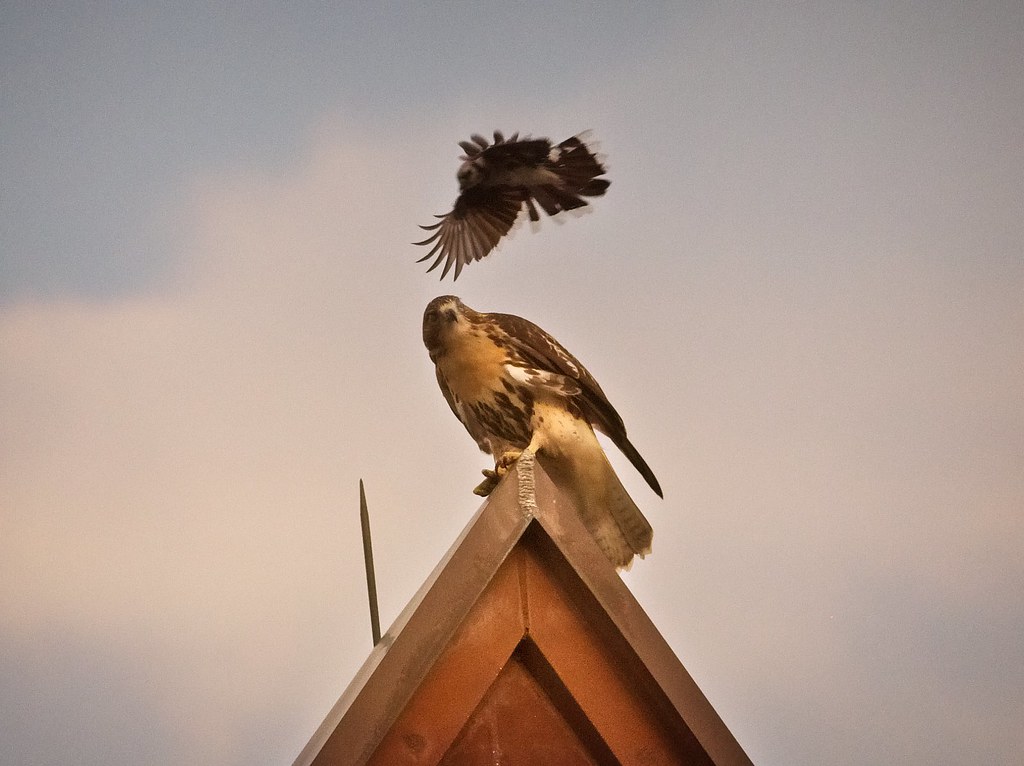 As the sun went down, rain clouds darkened the sky... 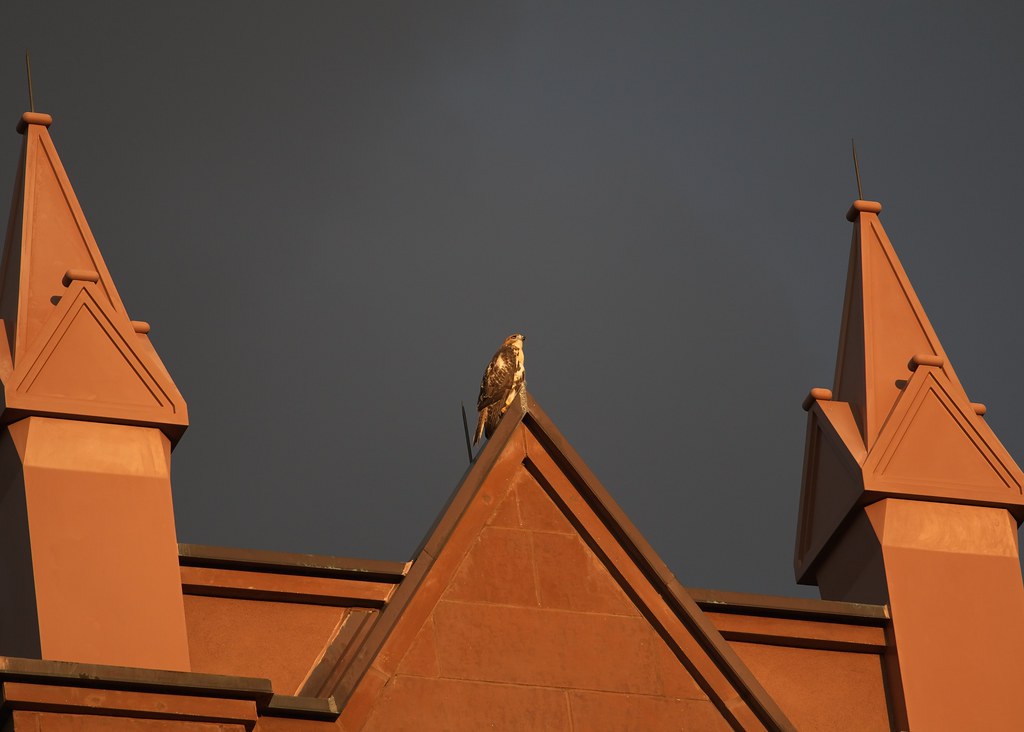 ...only to be brightened again by a rainbow. 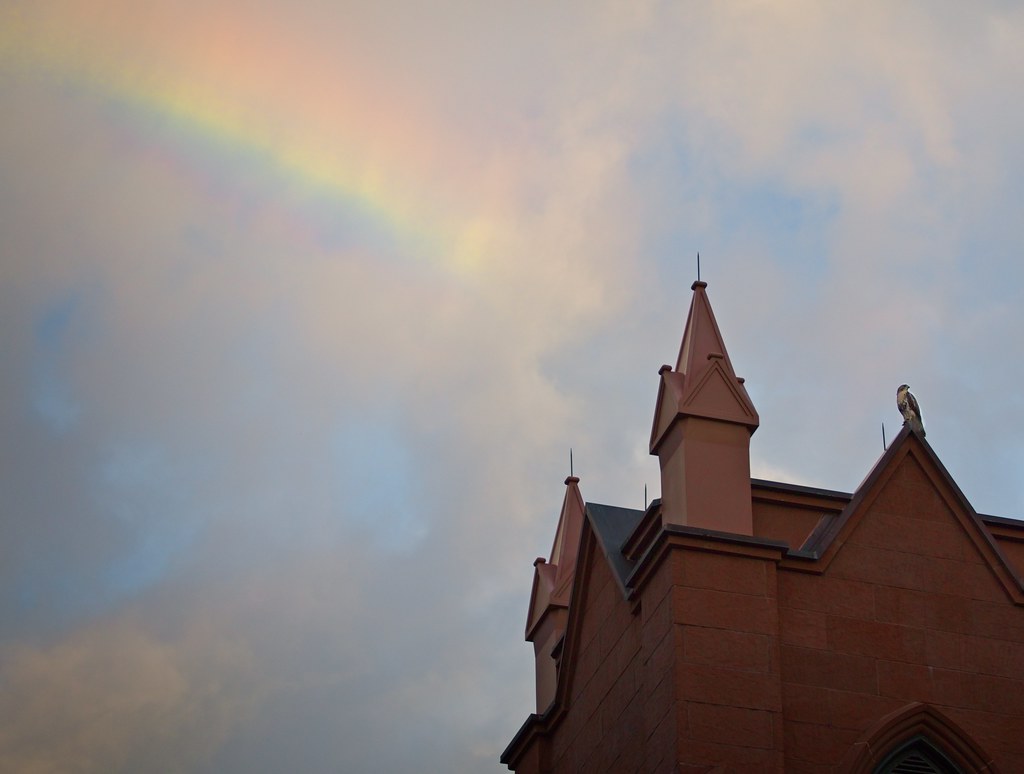