I spent most of the holiday weekend with the Tompkins Square hawk family, who are all doing very well.

To start, I found Flatbush in a new spot on the 4th of July. He'd ventured across Avenue A and was perched on a chimney cover near St Mark's Place.  The band is visible on his left leg. 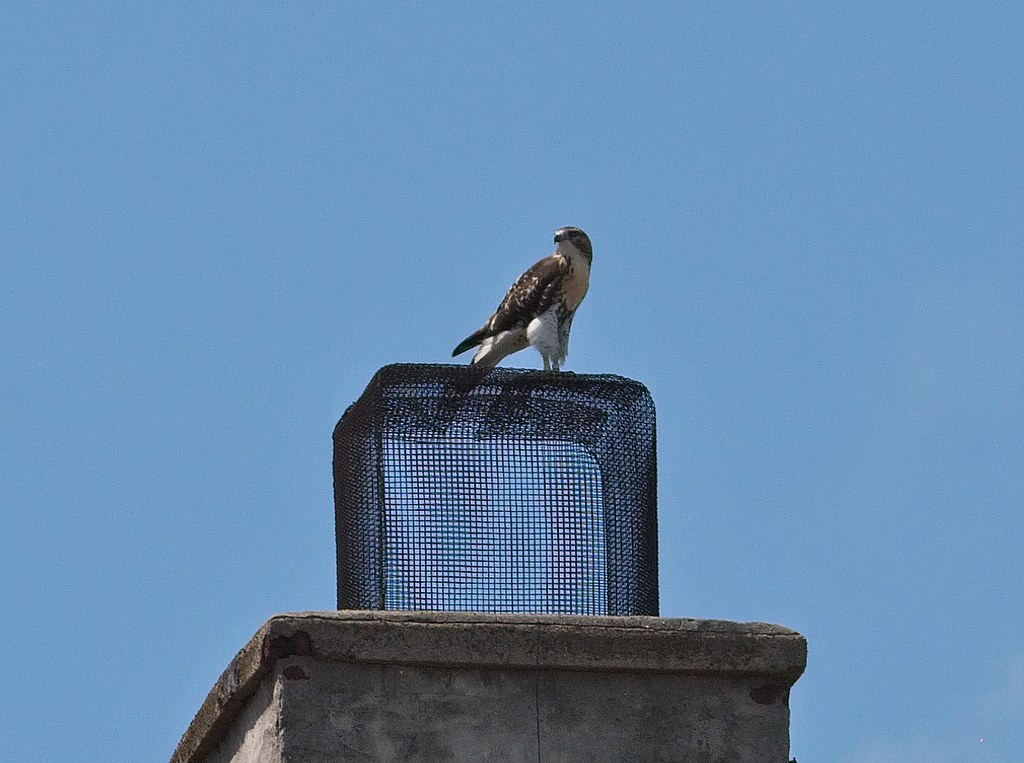 From there, he flew across the street to the park and into a sycamore often preferred by Dora. He did this a couple of times, which makes me wonder if he's been hiding out in that tree during the times when we can't find him. 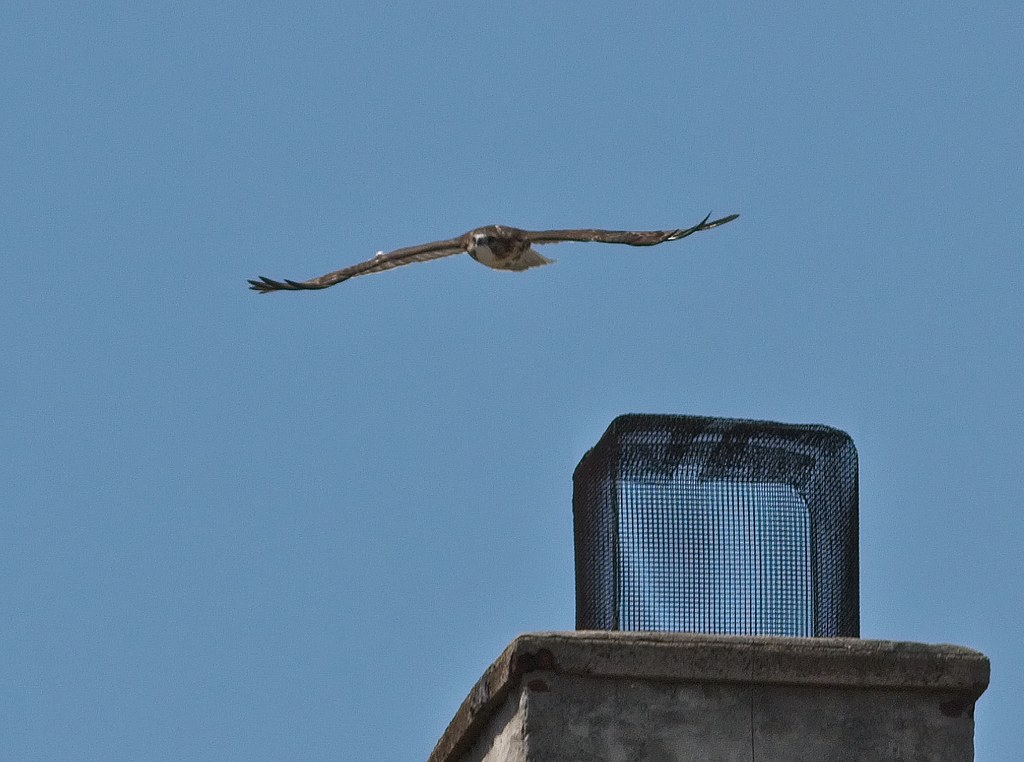 Flatbush is still the main draw in the park.  I don't remember any of the past fledglings getting as much attention as this one.  He's definitely got a fan club! 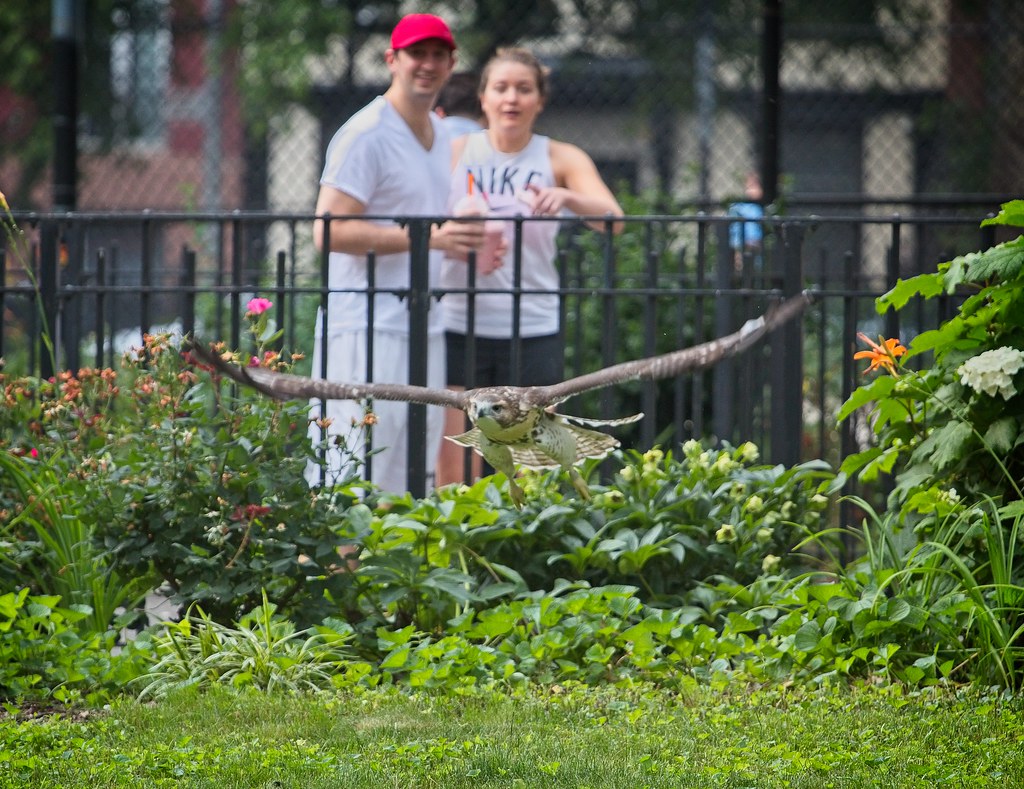 The fledgling is still being fed by foster-dad, Christo, who seems to be trying to encourage the youngster to take some initiative.  Several times over the last few days, I've seen Christo hold off retrieving food Flatbush has dropped.  It's tough love - the kid needs to learn to pick up his own food, which I'm sure he'll figure out soon. 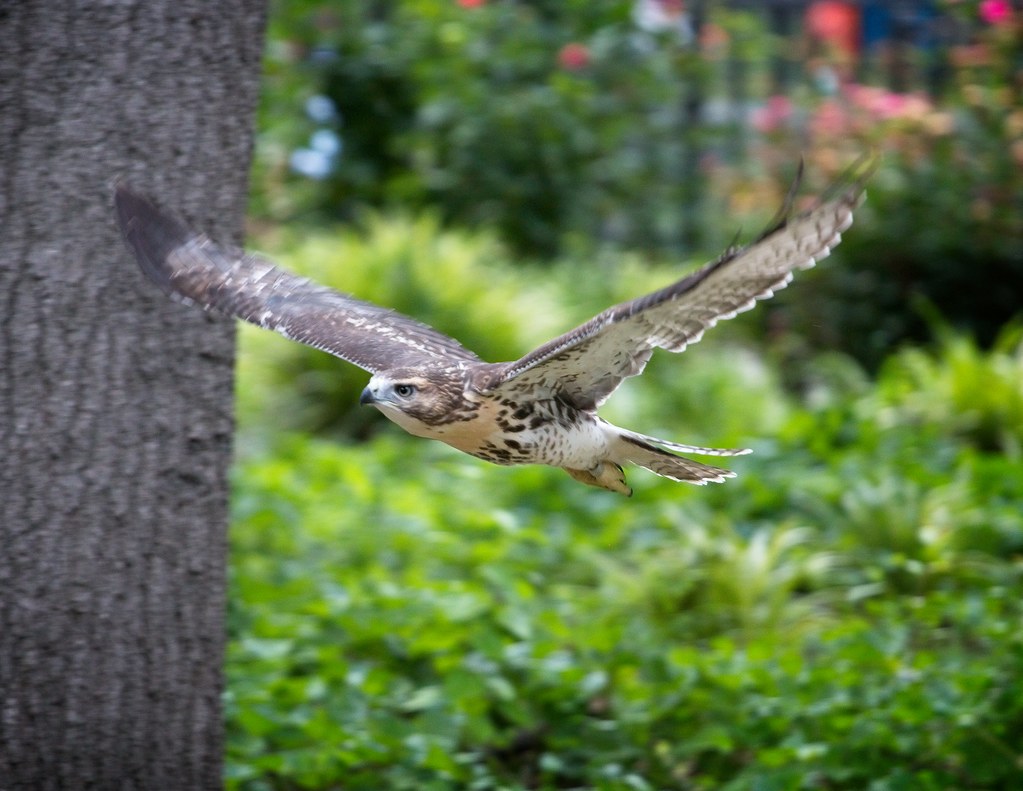 Ten, on the other hand, is more advanced.  She radiates confidence and it's been a real joy to watch her evolve into a teen hawk. 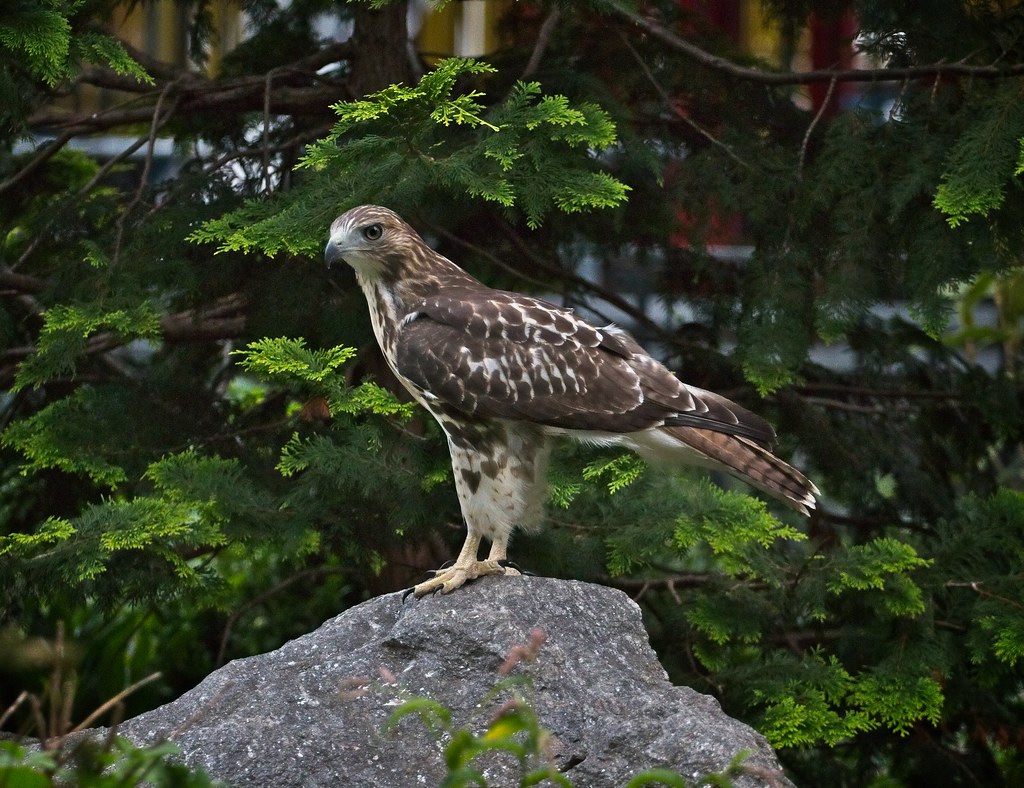 She knows how to strike a pose, perching in the most prominent places. 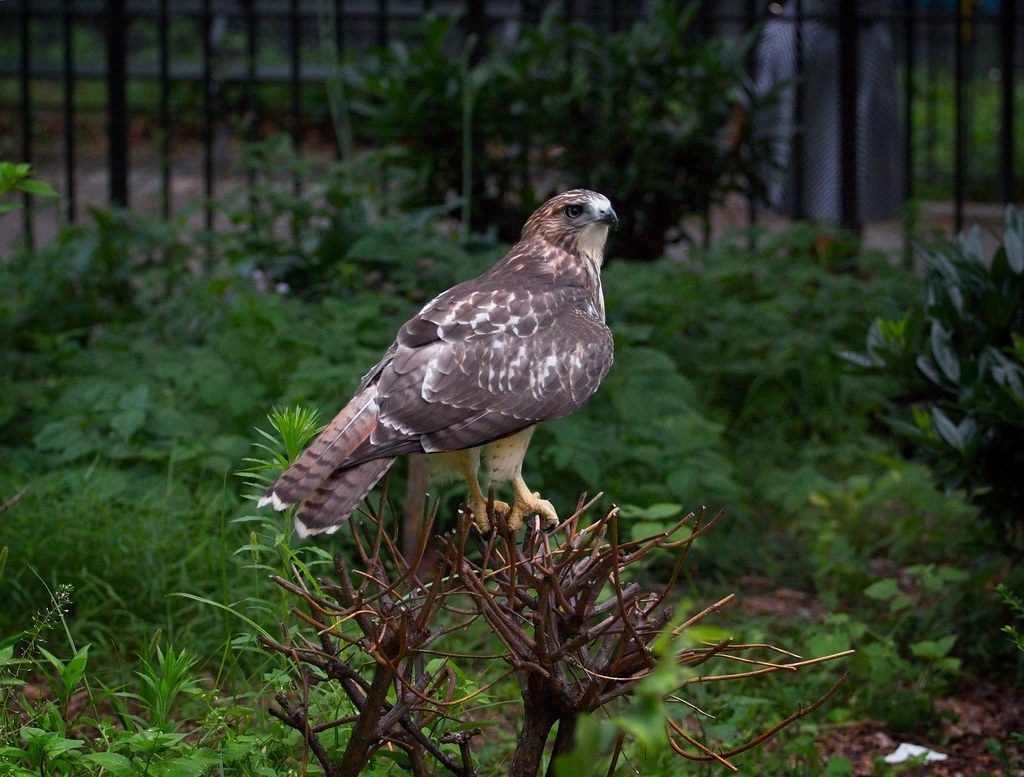 Besides Flatbush's leg band, one way to tell the fledglings apart is by their tails.  Flatbush has a uniformly dark brown banded tail. Ten has a distinctly light middle tail feather, as seen below. 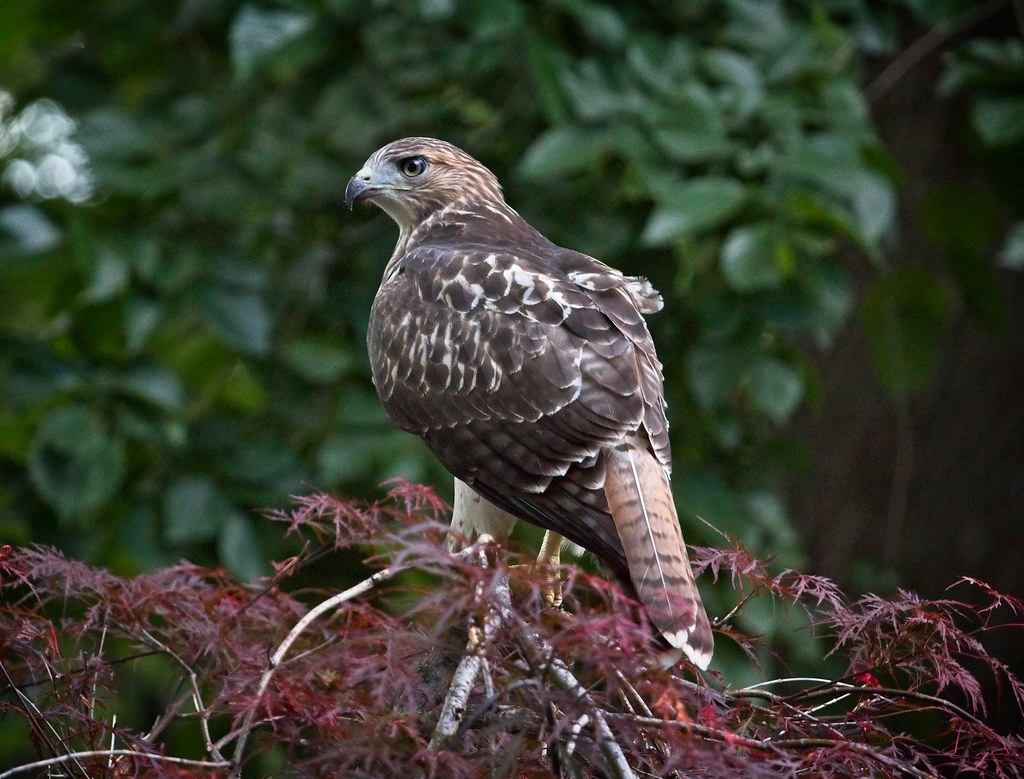 She's been playing in the grass a lot, finding toys like sticks, leaves, dirt clods and dead furry things.  Yesterday, I saw her pull bark off a tree and toss it around in the air. 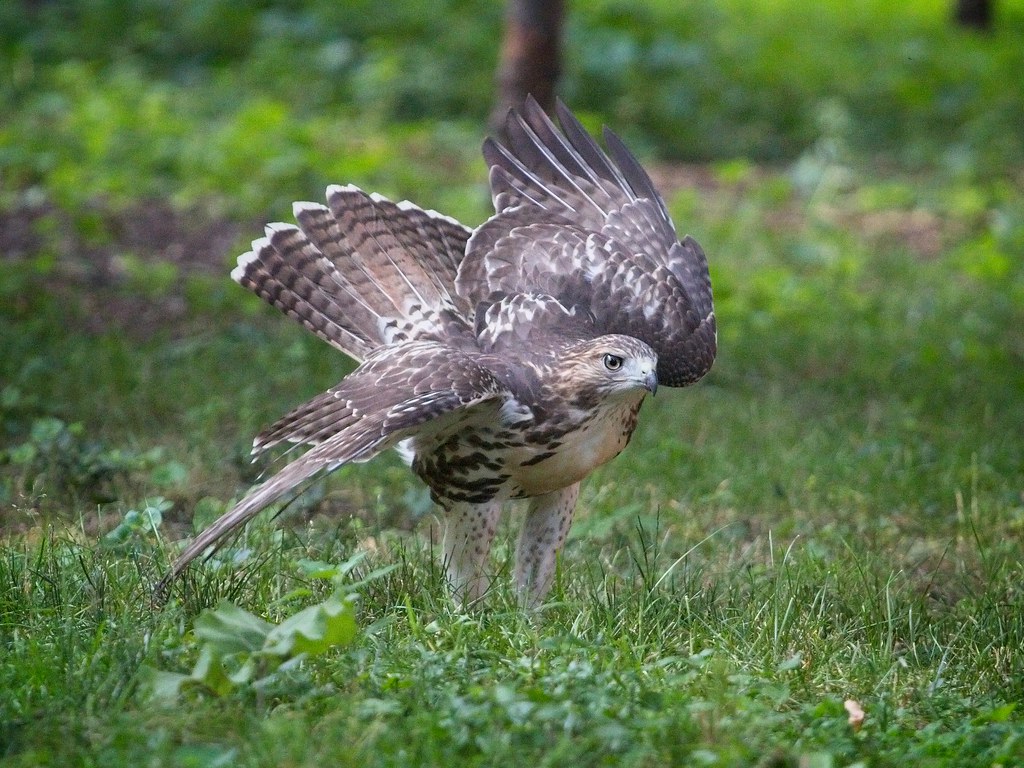 She reminded me of one of her siblings who did the same thing in the same patch of grass three years ago.

On the 4th, the fledgling thrilled hawk-watchers by zipping around low... 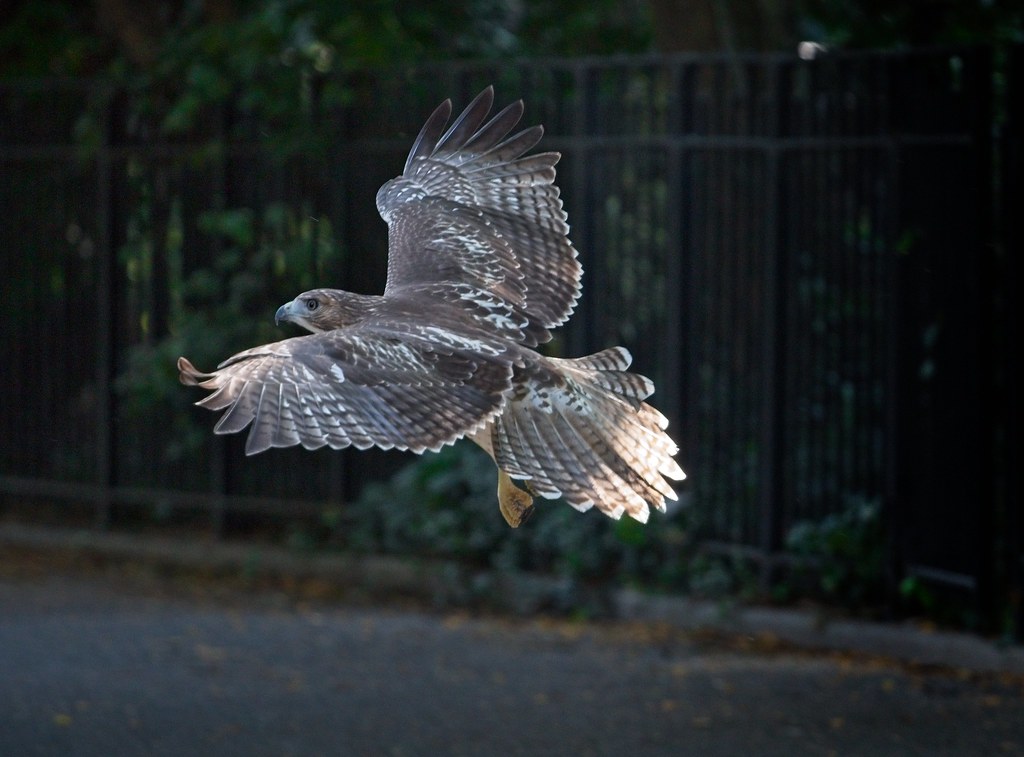 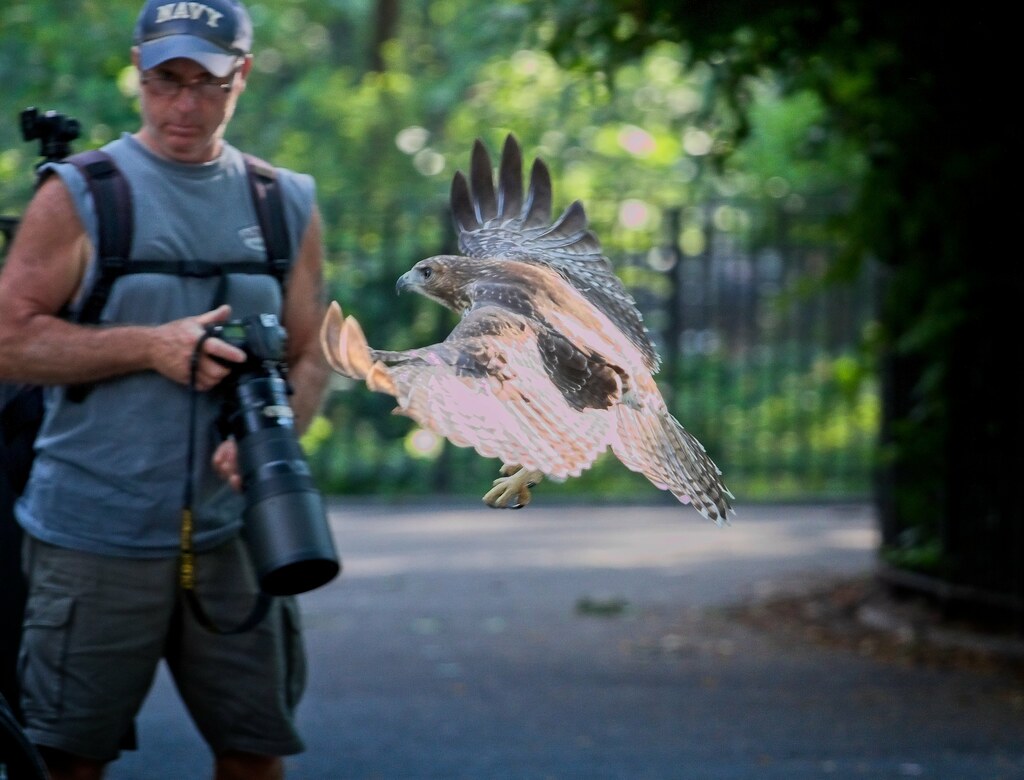 Assuming Ten hatched on/around April 19, she is now two and a half months old. 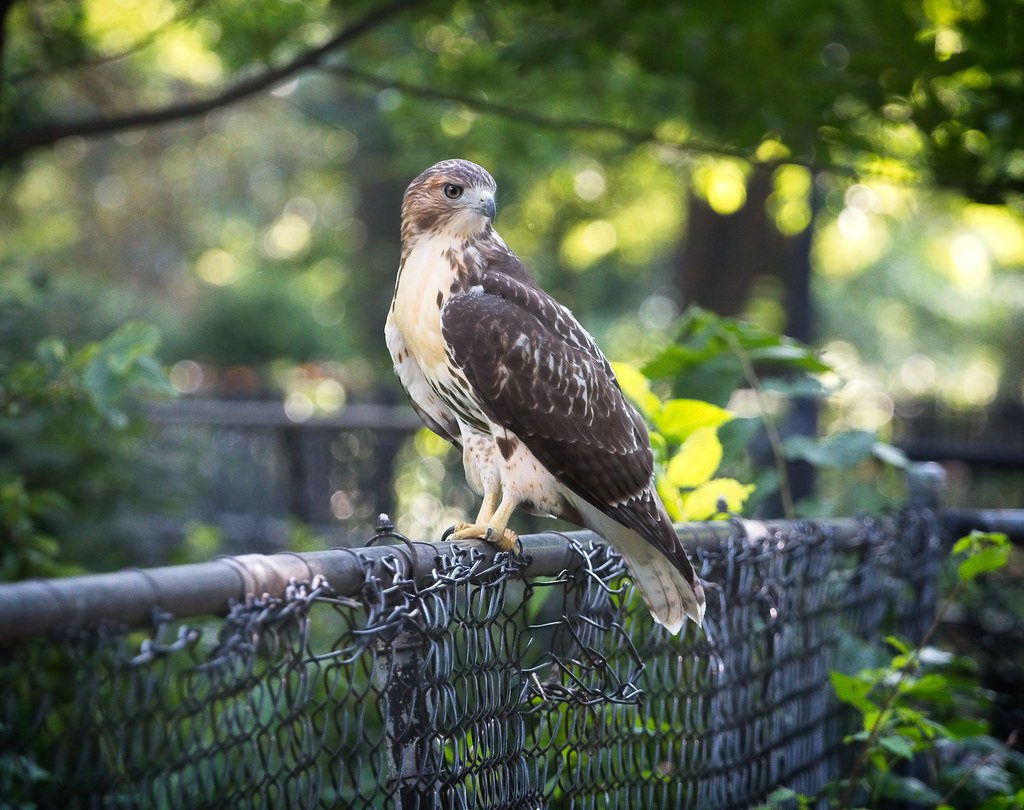 The blue jays are not so delighted to have more hawks around.  Ten has been holding her own when they mob her, perhaps because she knows one day she'll be able to take them down. 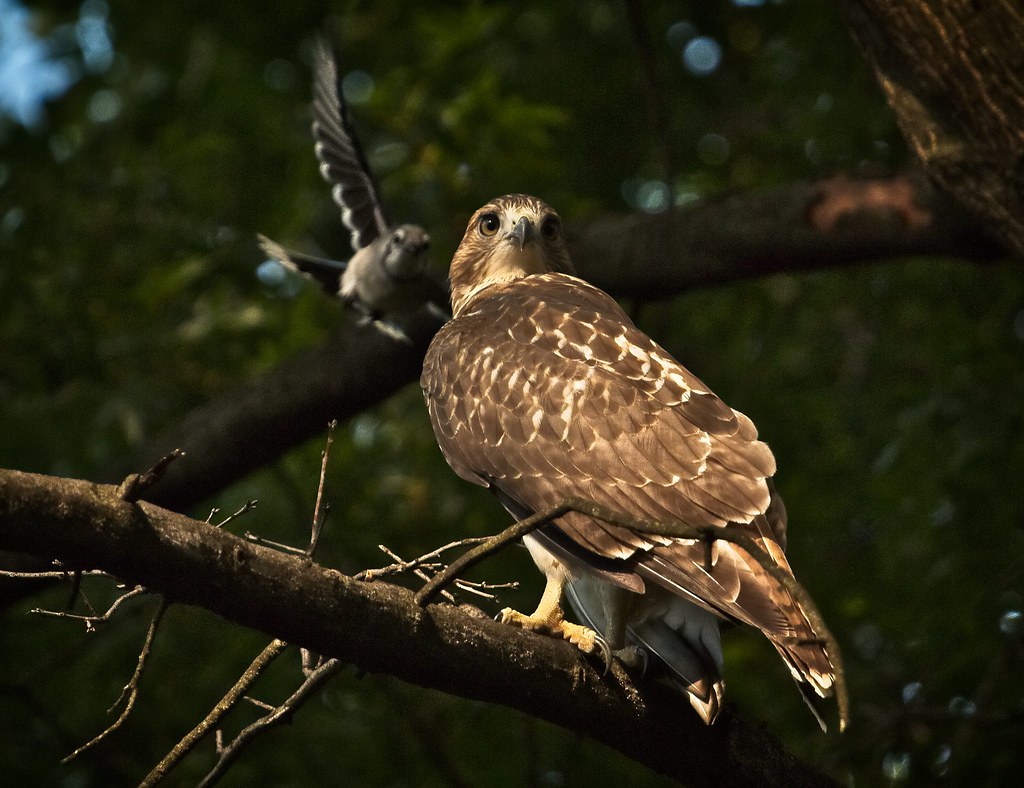 Meanwhile, Christo has been tirelessly taking care of the fledglings, as well as providing for Dora.  He's attentive and patient, spending a lot of time with Flatbush, who needs his assistance, and watching Ten, who seems to be doing just fine on her own.  He's been leaving food for her in the trees, which she retrieves herself. 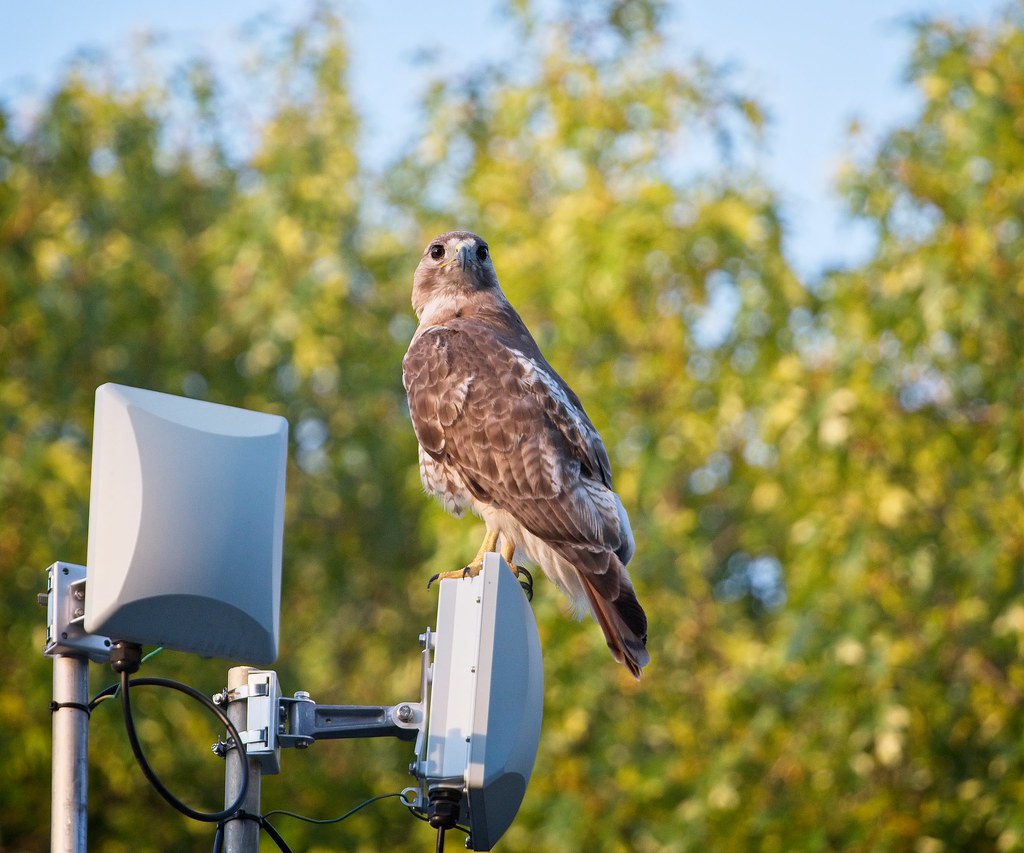 The summer heat drove Christo to drink water out of the General Slocum memorial fountain, which we first saw him do last year. 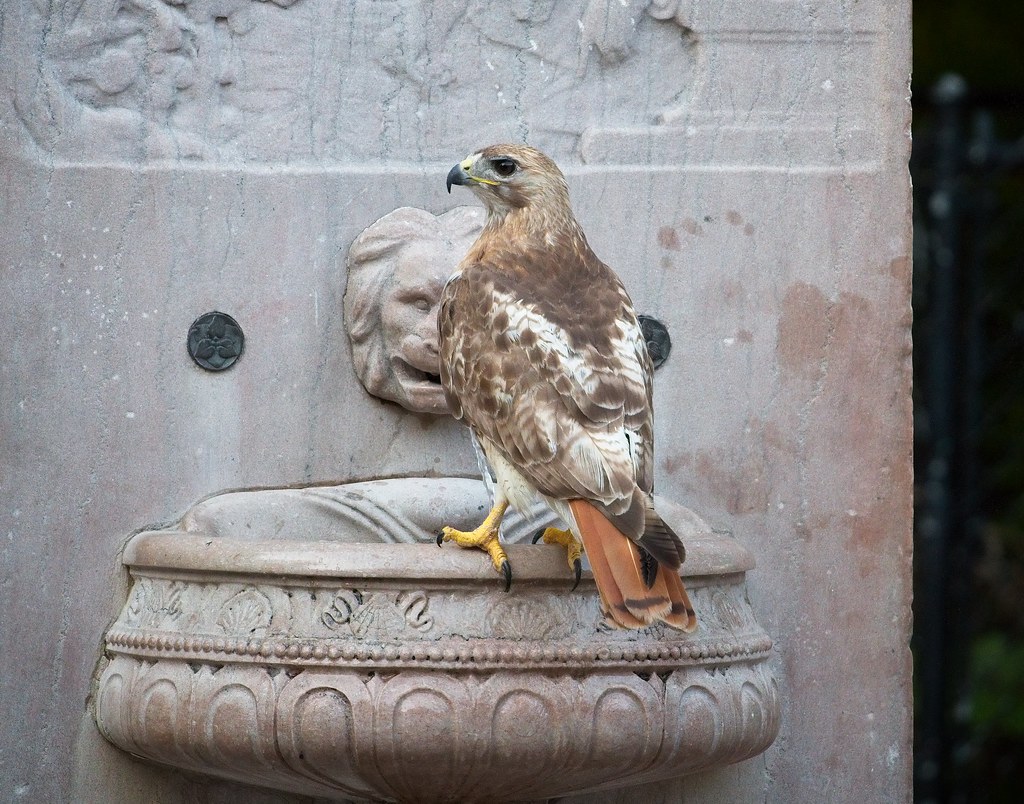 Later, a soak in his private bath... 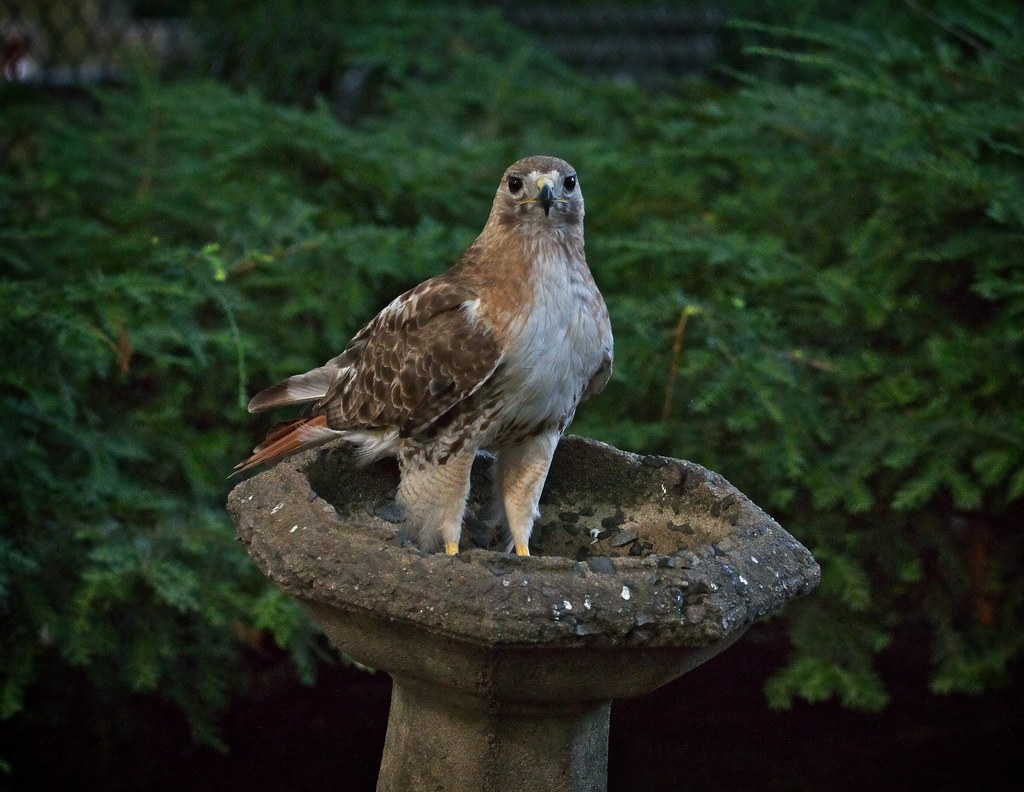 Chasing the last rays of sunlight... 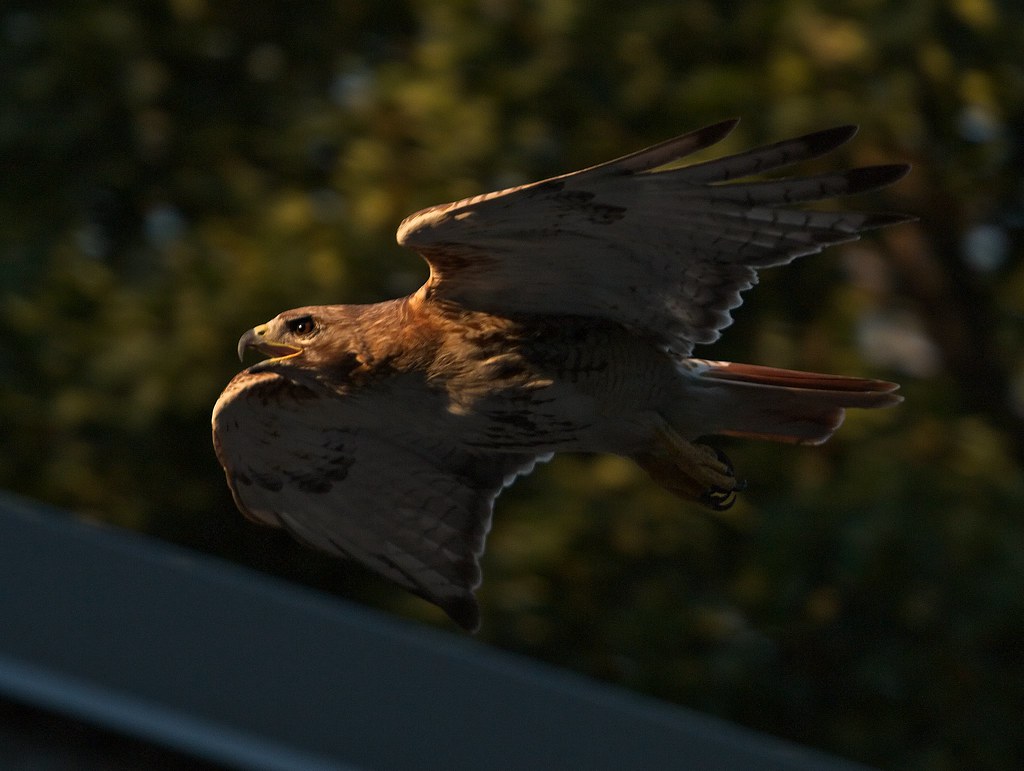 Christo and Dora are both starting to molt.  In the photo below, you can see Christo is missing two tail feathers. His face is also starting to look ragged, which is perfectly normal. 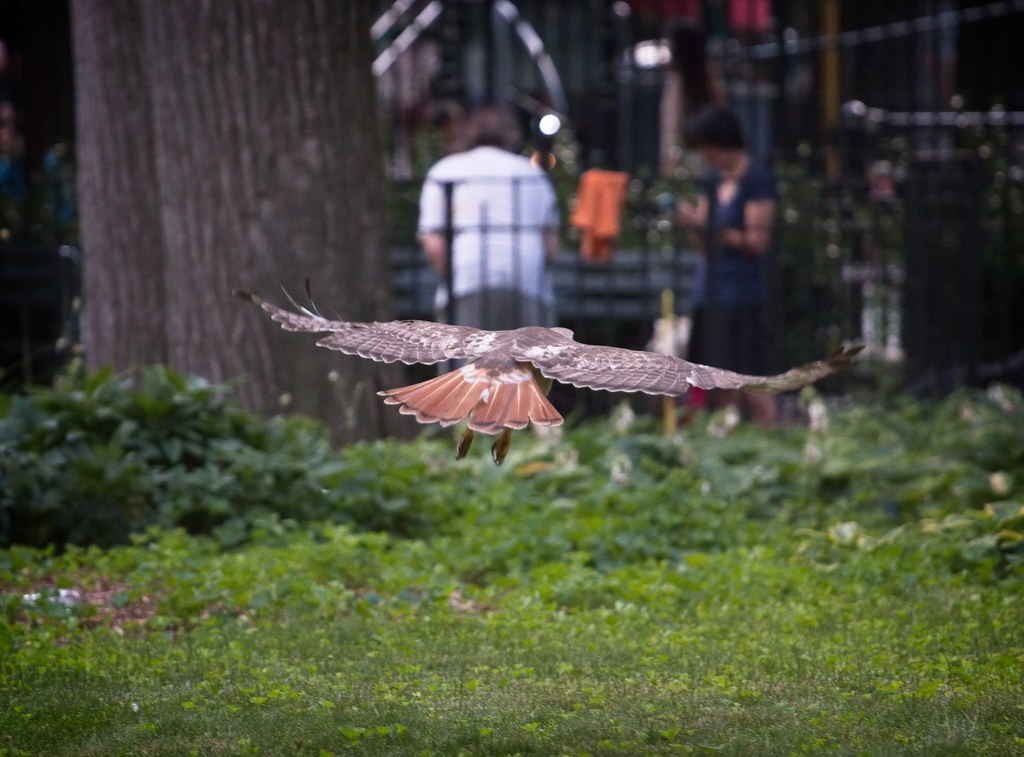 In past years, Dora has started molting in July and Christo has started in August, so he is early this year.

So, where is Dora?  She's around.  In fact, she's been spending more time in the park this summer than I remember her doing in previous years.  She keeps high in the trees, often in places where she is visible, but camera-shy.