I've been waiting to post an update on the Tompkins Square red-tailed hawk fledgling until I had more information about his health.  The consensus seems to be he is suffering from West Nile virus and seems to be pulling through it. However, there is no way to know for certain that West Nile is the culprit without doing blood tests. 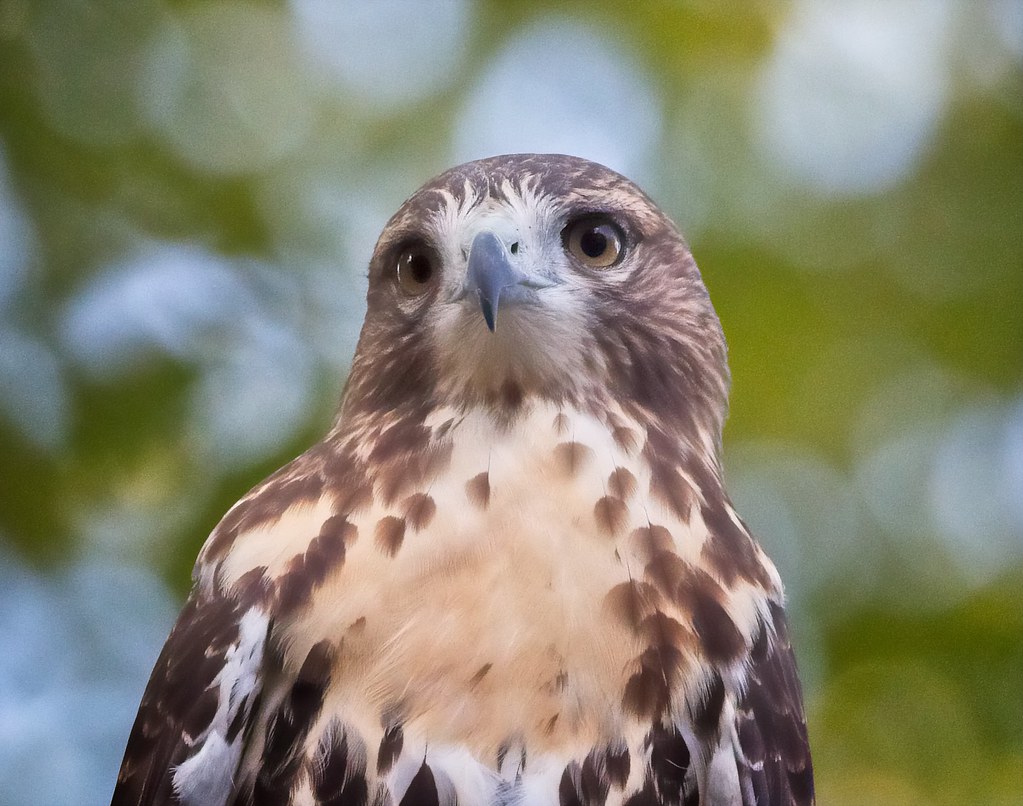 The fledgling has been displaying signs of illness since August 24, and may have fallen ill a couple of days before that.  A second attempt was made to capture him last week, but he was too wily and eluded the NYC Urban Park Rangers and raptor rehabber, Bobby Horvath, from Wildlife in Need of Rescue and Rehabilitation (WINORR).  Thanks to Bobby and Rangers Jill and Johnny who spent the day in the park trying their best to net the little guy. As this is a wild bird, there's nothing anyone can do unless he comes close enough and allows himself to be caught.

One way we can tell the hawk is not well is by looking at his eyes.  He either perches for long periods of time with his eyes completely closed, or he partially closes them, as seen in the photo below. 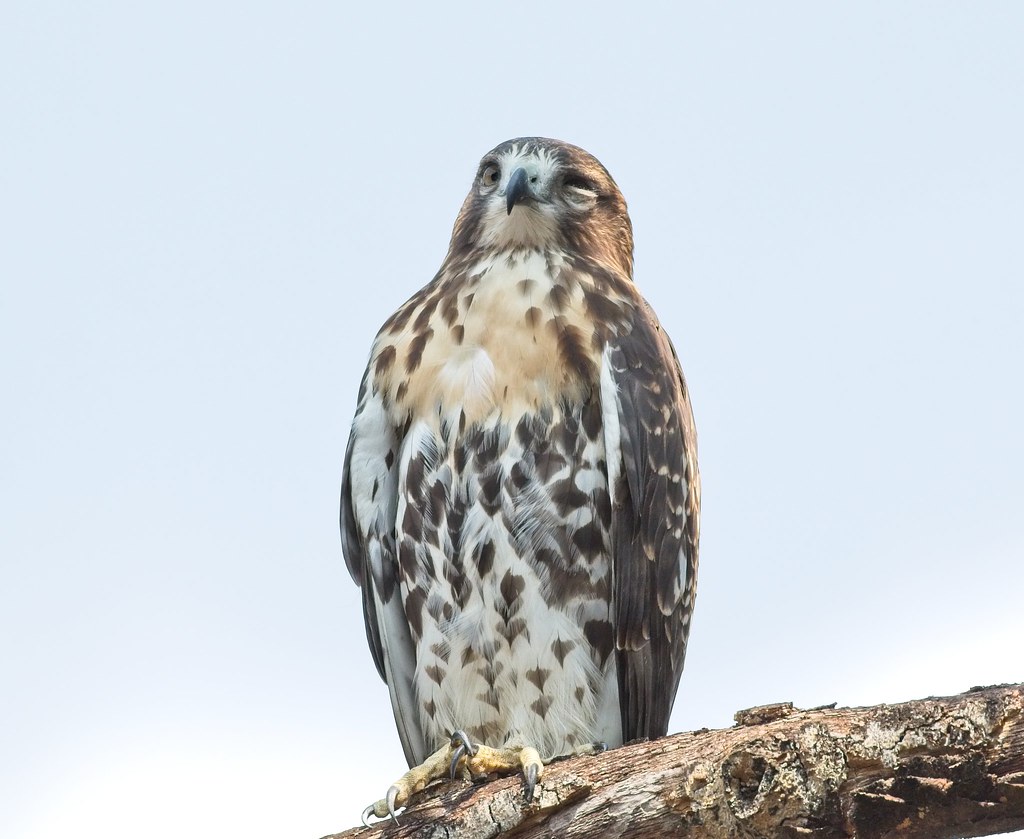 Other symptoms are clumsiness, loss of balance and being lethargic. This is a normally energetic hawk, so sitting for hours without making a sound is not consistent with his usual behavior.

The good news is he will probably pull through.  He's a strong hawk and a fighter. He appeared the worst on Saturday, August 25. Since then, he's had good days and days where he doesn't look very well, but none have been as bad as that Saturday. At this point, I can just hope he stays out of trouble and continues to improve.

Despite being ill, the fledgling has had no trouble catching prey.  He's also receiving food supplements from his parents. 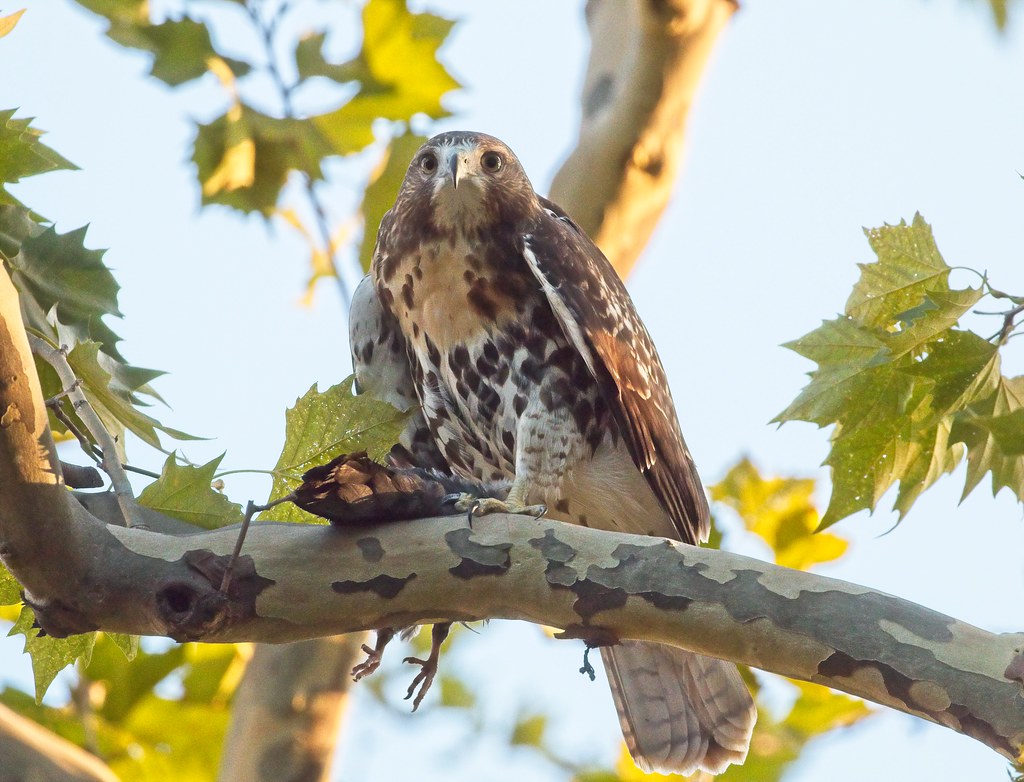 Something unique about this fledgling is his affinity for walking and crawling under fences, as seen below.  I've seen him do this several times now and cannot explain it. If there is a fence, he'll go under it rather than fly over.  I'm hoping he grows out of this habit before he disperses. 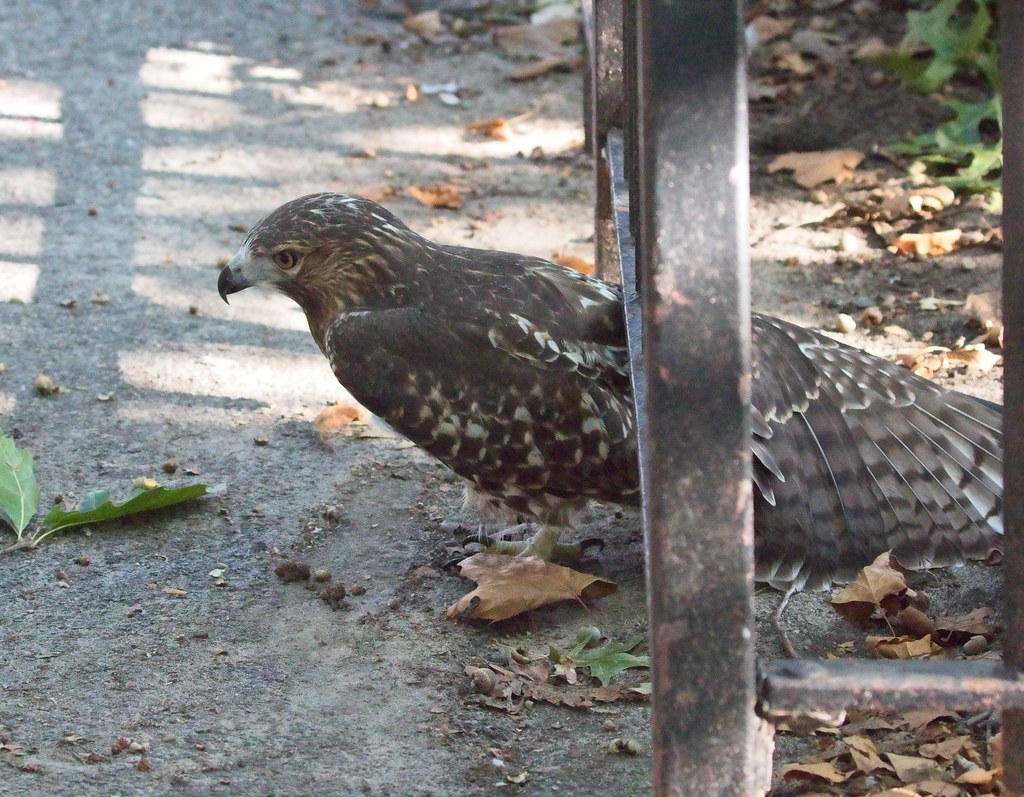 I was happy to see the hawk drinking fresh water this weekend rather than ingesting fetid water from the roof of the men's room, but he's still doing that, too.  The pool on top of the bathrooms could very well be the source of mosquitoes that carry West Nile. 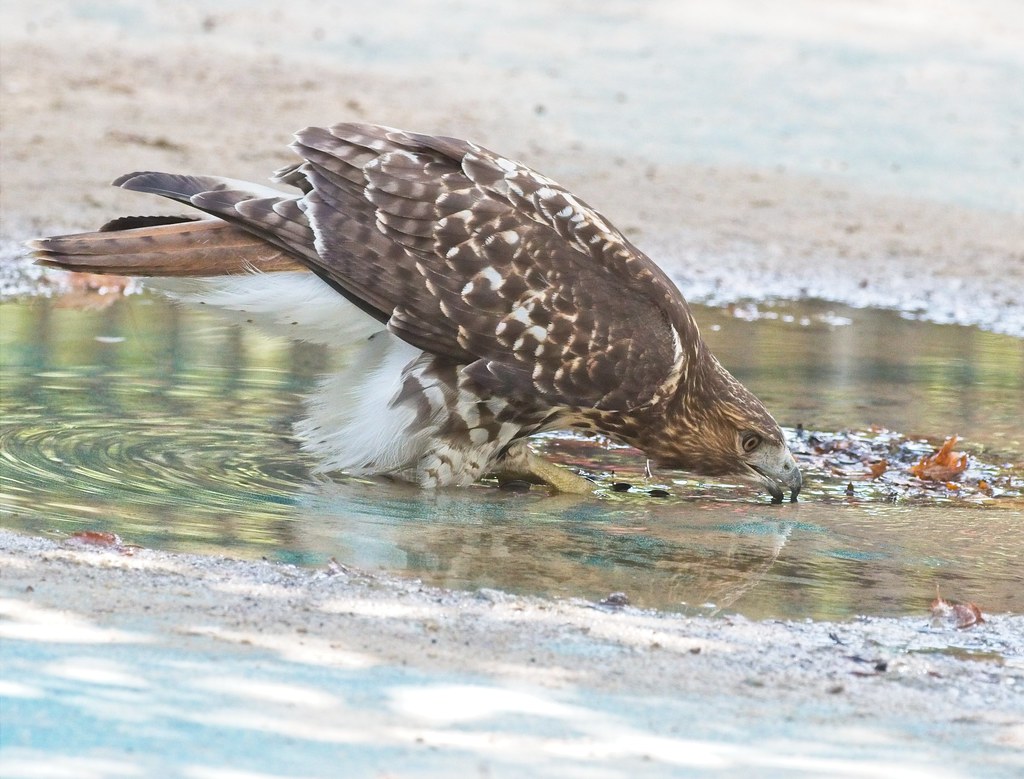 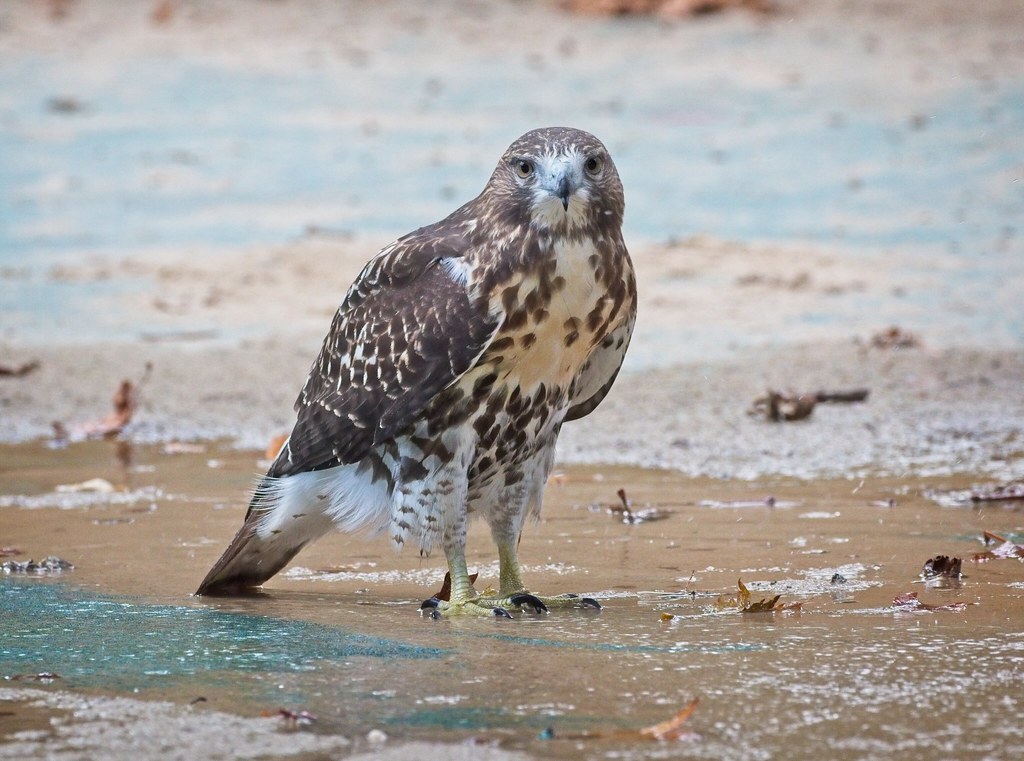 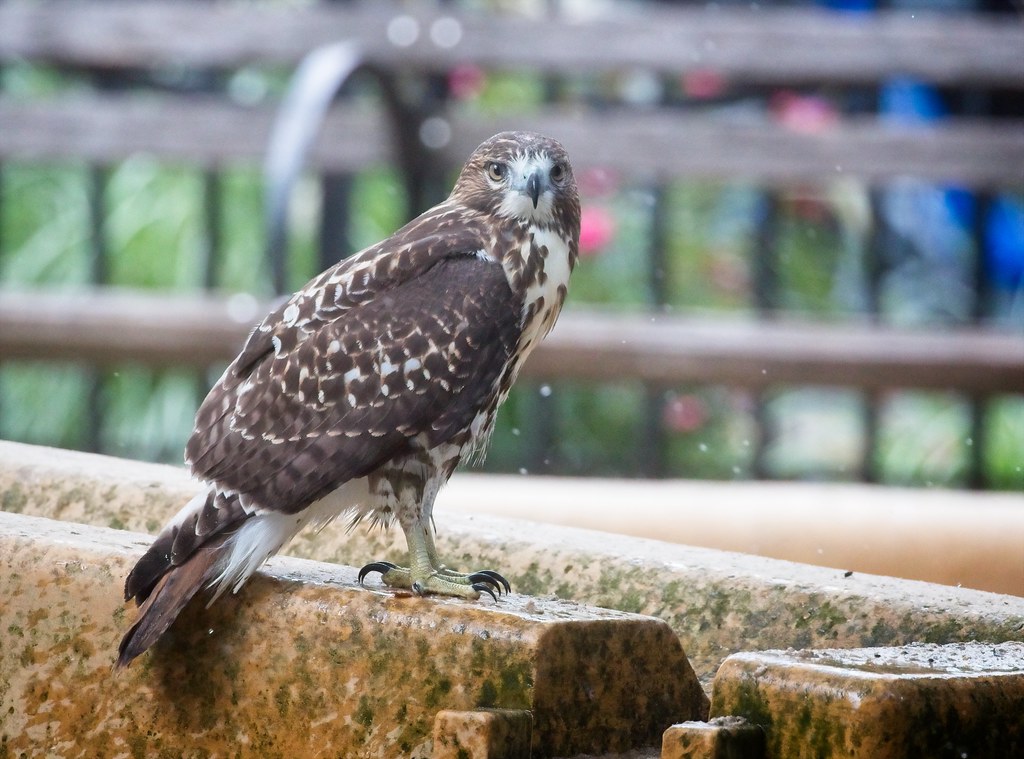 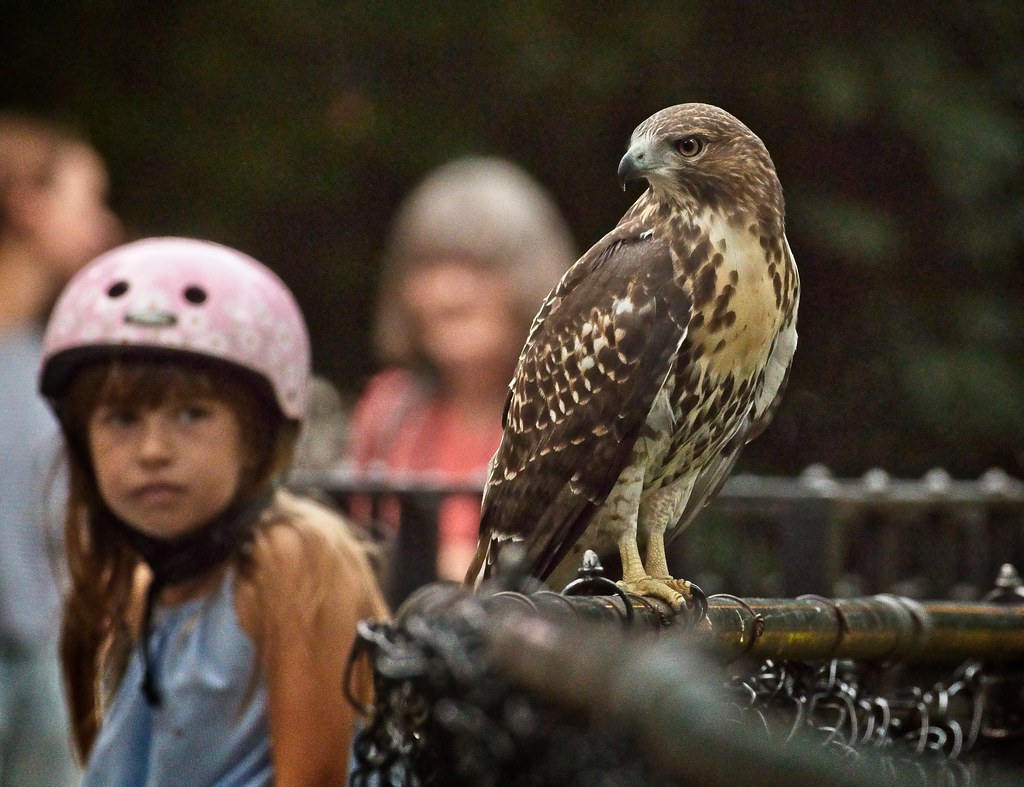 Although this fledgling spends a lot of time walking around on the ground and playing in the bushes, he does know how to soar.  I caught him flying above the skateboard area last Friday turning circles high in the sky. 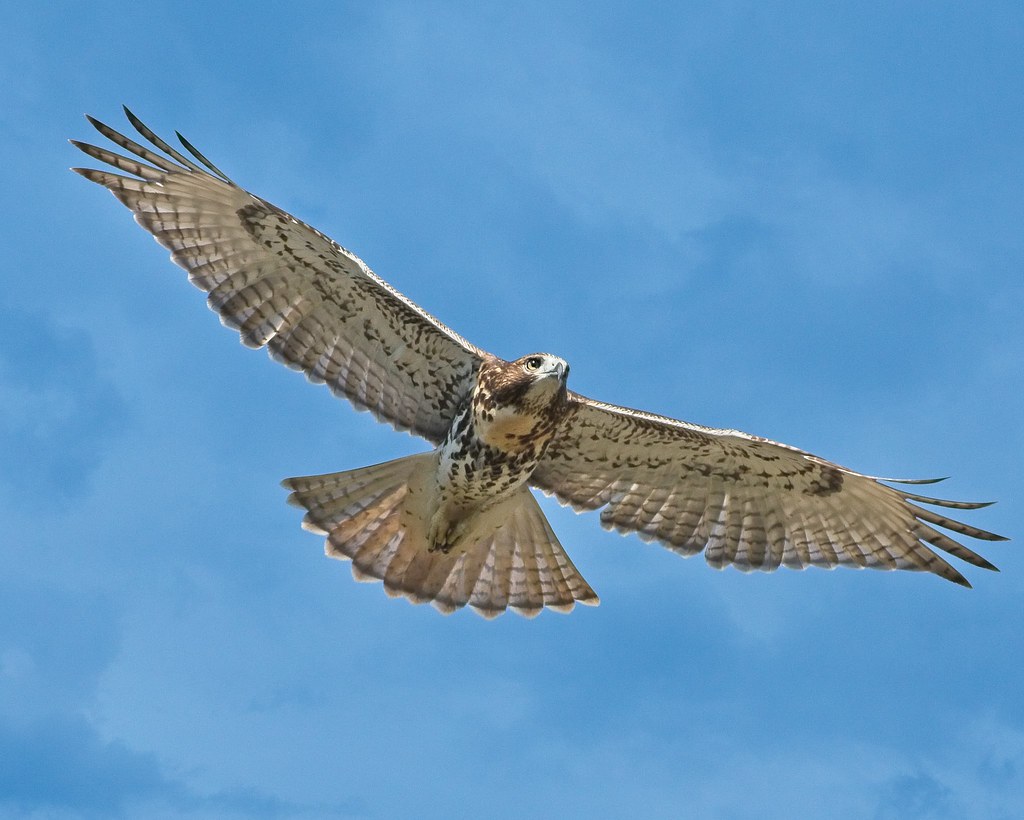 You can see more recent photos of the fledgling and his parents on my Flickr page.

In related news, we recorded another hawk podcast with the eminent neighborhood blogger, EV Grieve. This episode is a follow-up to the one that aired at the beginning of summer. You can listen below, or visit the post on EV Grieve.

This episode was recorded on August 24, and as soon as I left the studio, I went to the park where I discovered the fledgling was sick.  At the time of the recording, I had no idea anything was wrong.

Thank you to EV Grieve for the continued interest and support of our local hawk neighbors.