The Destruction of Lower Manhattan

With so many landmark businesses and buildings disappearing lately, I've been wondering how NYers felt at other times entire neighborhoods have been wiped out.

One of my favorite books is photographer Danny Lyon's The Destruction of Lower Manhattan.  In 1966-7, 60 acres of buildings along Beekman street were demolished, river to river, to make way for the World Trade Center, a ramp for the Brooklyn Bridge, and Pace University.  An entire chunk of the city was wiped out in one fell swoop and, fortunately for future generations, Lyon was there to document it.  He moved into a loft at Beekman and William Streets and, with not much else to do, went exploring the comdemned area, camera in hand. 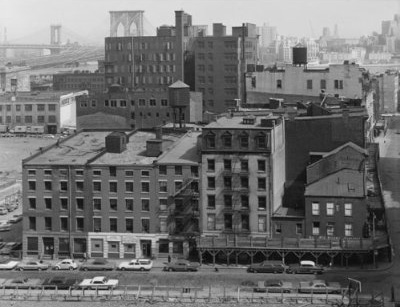 In the book's introduction, Lyon says,


I came to see the buildings as fossils of a time past. These buildings were used during the Civil War. The men were all dead, but the buildings were still here, left behind as the city grew around them. The passing of buildings was for me a great event. It didn't matter so much whether they were of architectural importance. What mattered to me was that they were about to be destroyed. Whole blocks would disappear. An entire neighborhood. Its few last loft occupying tenants were being evicted, and no place like it would ever be built again. The streets involved were among the oldest in New York and when sections of some were closed by the barriers of the demolition men, it meant they would never be opened again.

As I am very sentimental about my neighborhood and the city in general, it struck me as strange how Lyon and, seemingly no one else, cared very much for the architecture being destroyed.  I think this detachment actually gave him a better photograpic eye - an objective point of view resulting in a collection of images that do not favor sympathy for the past or a desire to blaze into the future.  He remains steadfast in the present - that precise moment of death, when the line between being and not being is finest.

The desolation captured by Lyon is what continues to haunt me.  If you walk down Beekman Street and the surrounding area today, you'll be in the company of a few thousand people at every turn.  Lyon's photos show how empty the area was at the time.  He even states in his Epilogue that he moved to that particular part of the city "to get away from people."  One photo that sticks in my mind is of the intersection of Beekman and Water Streets where a group of women stand on the corner, looking absolutely bewildered.  The Beekman Hostpital had been torn down just days before, leaving no trace.

I used to live on W. 38th Street less than ten years ago.  When I returned to the area recently, I found it unrecognizable:  the entire block of buildings facing my apartment has disappeared, all the businesses I knew are gone, even my south-facing windows have been bricked up by a new luxury condo tower.  I am seeing similar changes happening in the East Village and, with the imminent demise of the buildings at 2nd Avenue and 1st Street, that part of the neighborhood will be something entirely different than it was five years ago.

The Beekman Street destruction was accomplished in one swift motion. It's taking a few years for the East Village (and other parts of the city) to completely change, but it's still happening at a pace that frightens me.  When I first discovered Lyon's book, I asked everyone I knew who lived in NYC in the late 1960s what they remembered of the event, but none of them remembered anything.  Thirty years from now, will anyone remember the East Village that I know? This site has a few photos and further description of The Destruction of Lower Manhattan.

Here is also an interesting interview with Danny Lyon in the New York Times.