Christo continues to tolerate Cooper's hawks on his turf

This last Sunday and Monday, Christo entertained a couple of juvenile Cooper's hawks in Tompkins Square.  As I've noted several times over the last few weeks, he and Dora have been highly tolerant of migrating Cooper's hawks in their territory, while demonstrating clear intolerance for other red-tailed hawks. 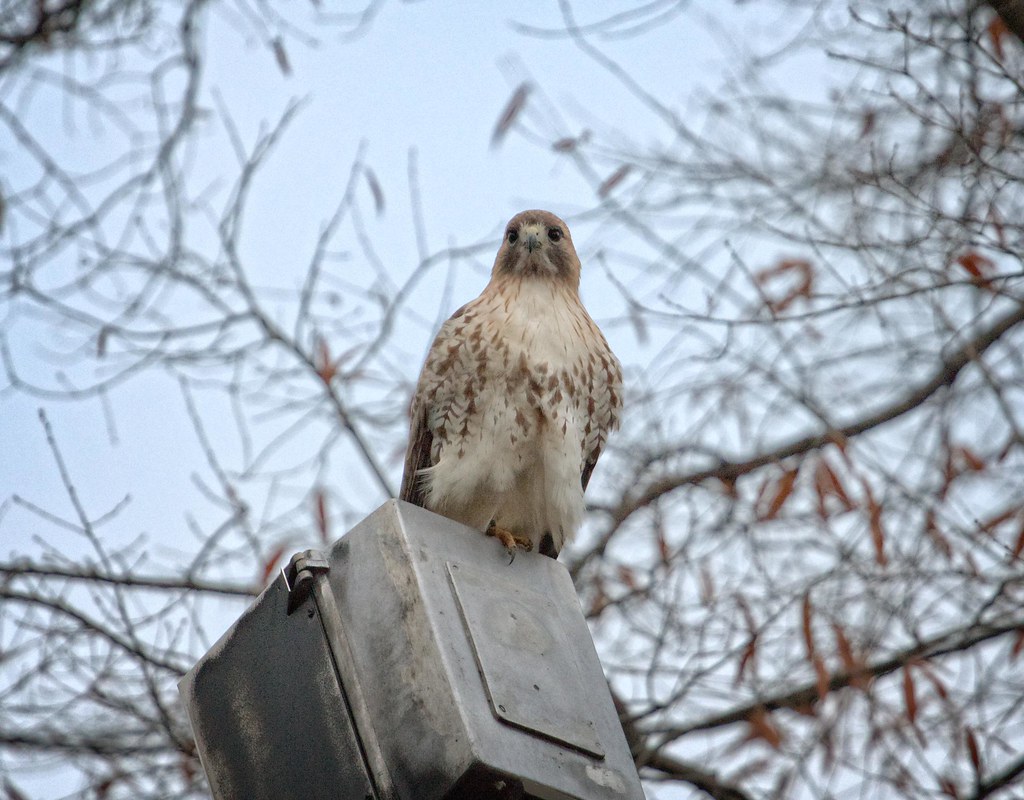 While Christo casually perched atop a light pole, a young Cooper's hawk flew by and perched in a nearby tree. 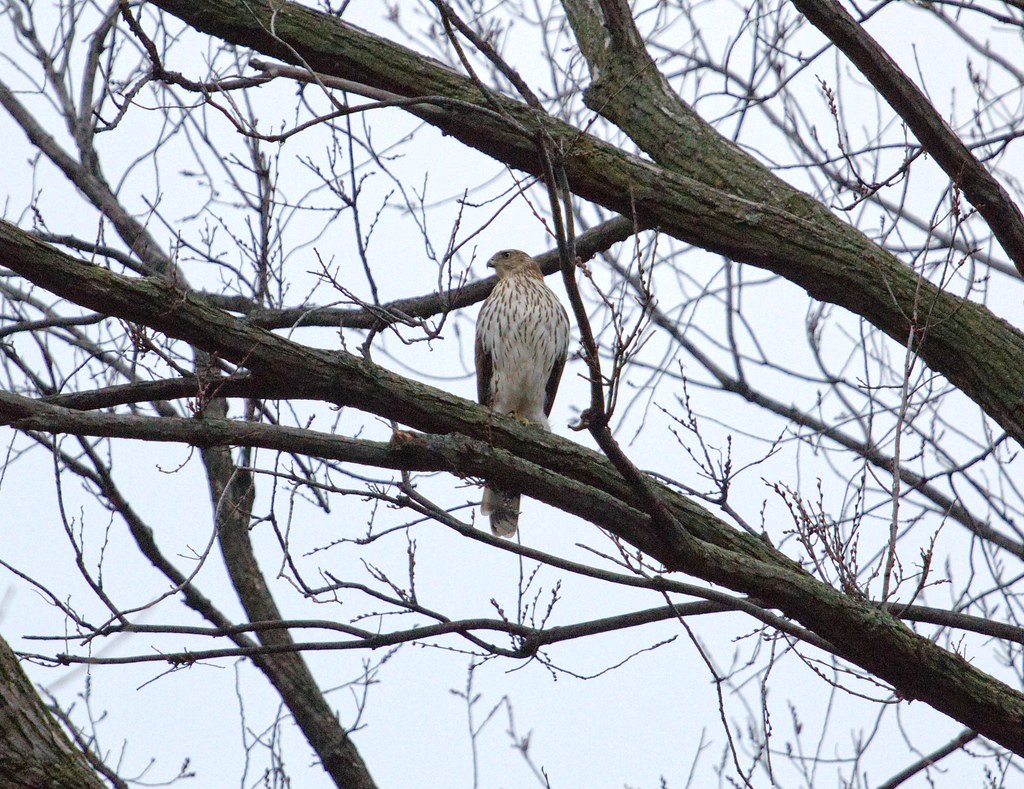 To be honest, I've lost track of all the Cooper's hawks that have been spotted in the park this season.  There has been at least one adult, possibly two, and several different juveniles. 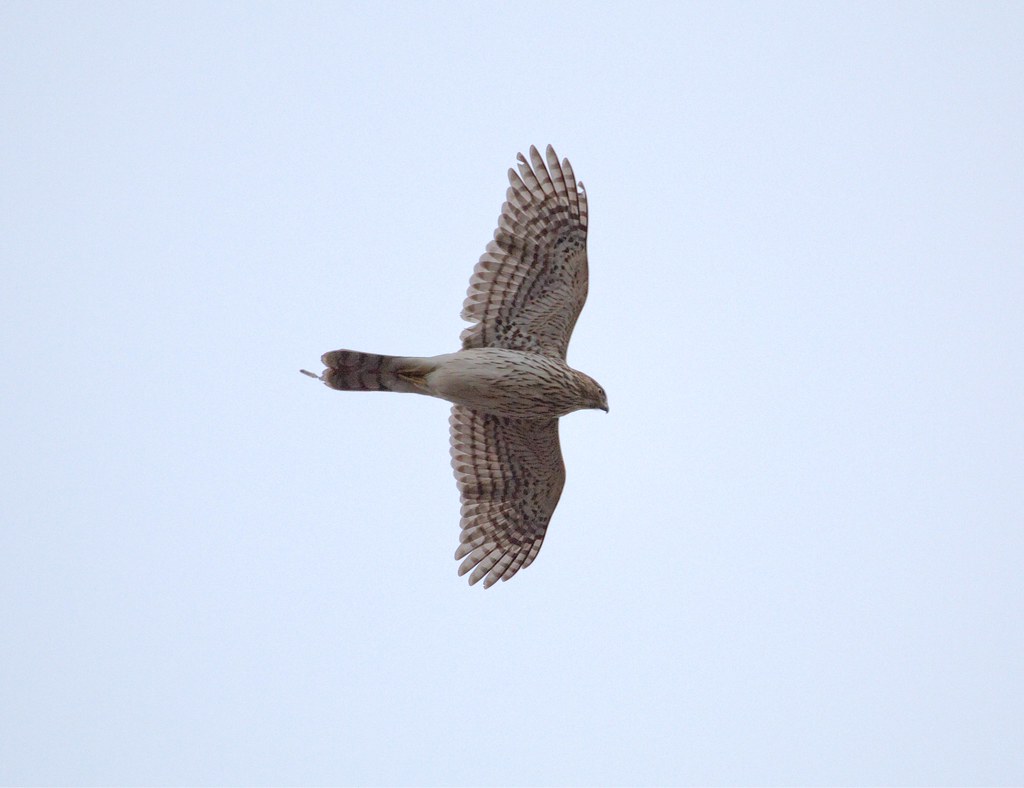 Sunday afternoon, shortly before the holiday tree lighting, Christo perched on a branch near the Krishna tree (lower left).  A juvenile Cooper's hawk flew in and perched near him (upper right). 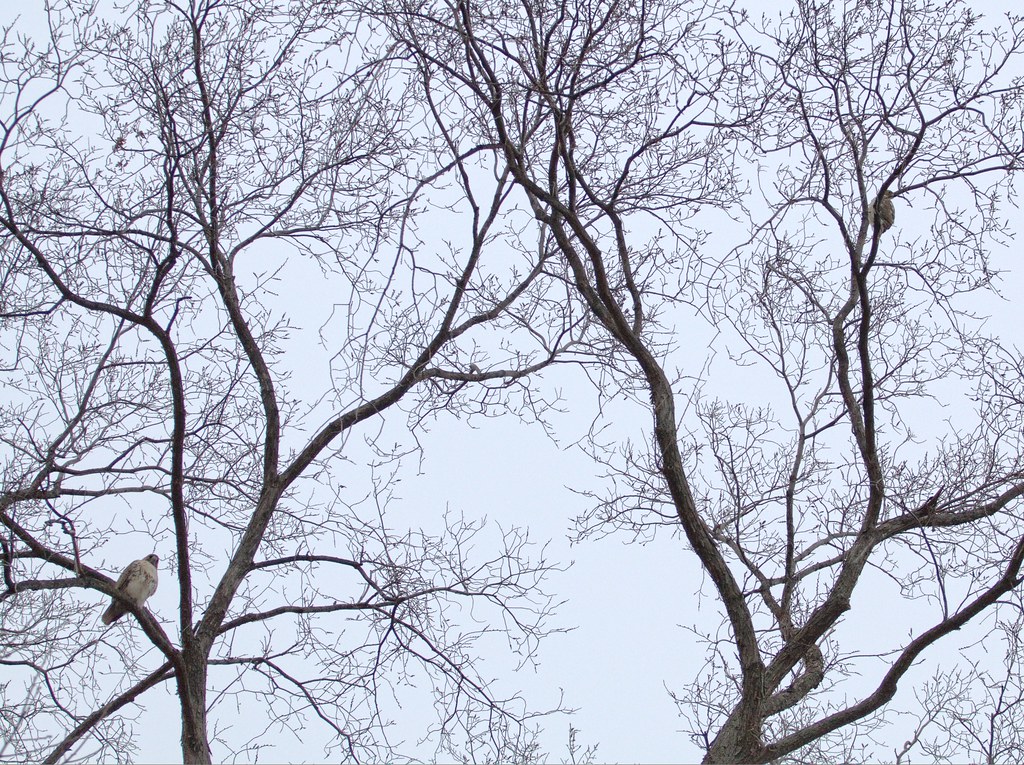 Christo seemed to ignore the other hawk as it hopped down closer to him, perching just a few feet away.  They stayed like that for a few minutes before the Cooper's decided to fly towards St Brigid's church.  It was only then that Christo took off after it. 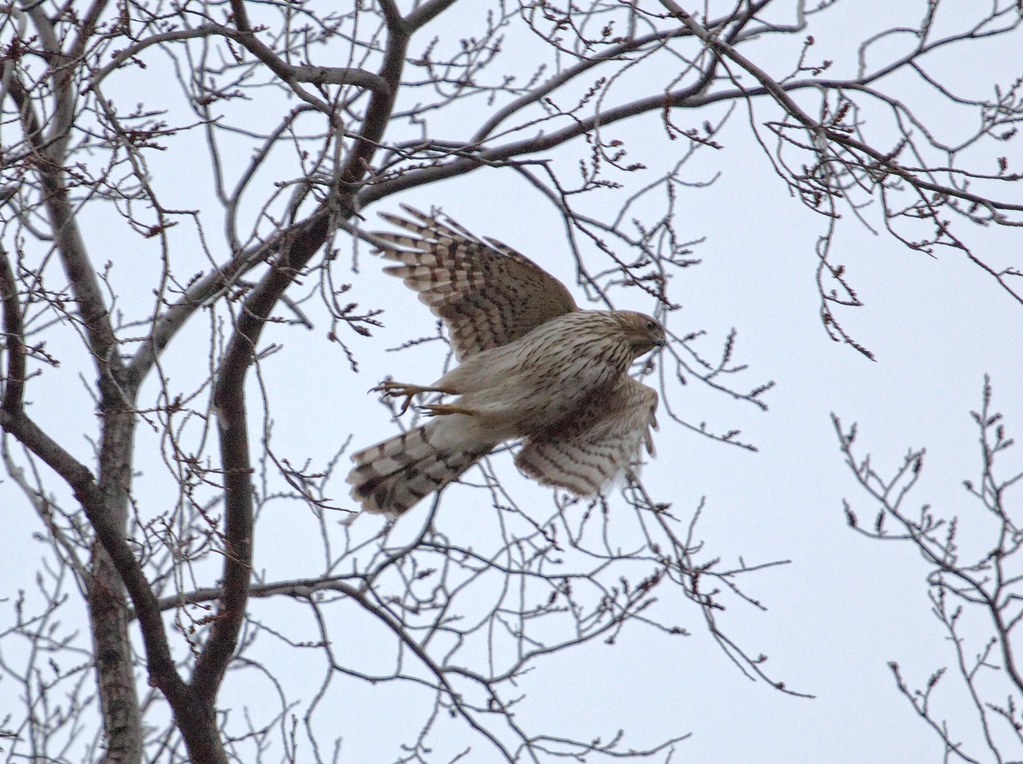 I have yet to see any of the Cooper's hawks catch any food, so if they're eating in or around the park, I keep missing them in action.  But each day I visit Tompkins Square, I'm guaranteed to see at least one.

Late Monday afternoon, Christo made an unexpected rat catch on the south side of the park. 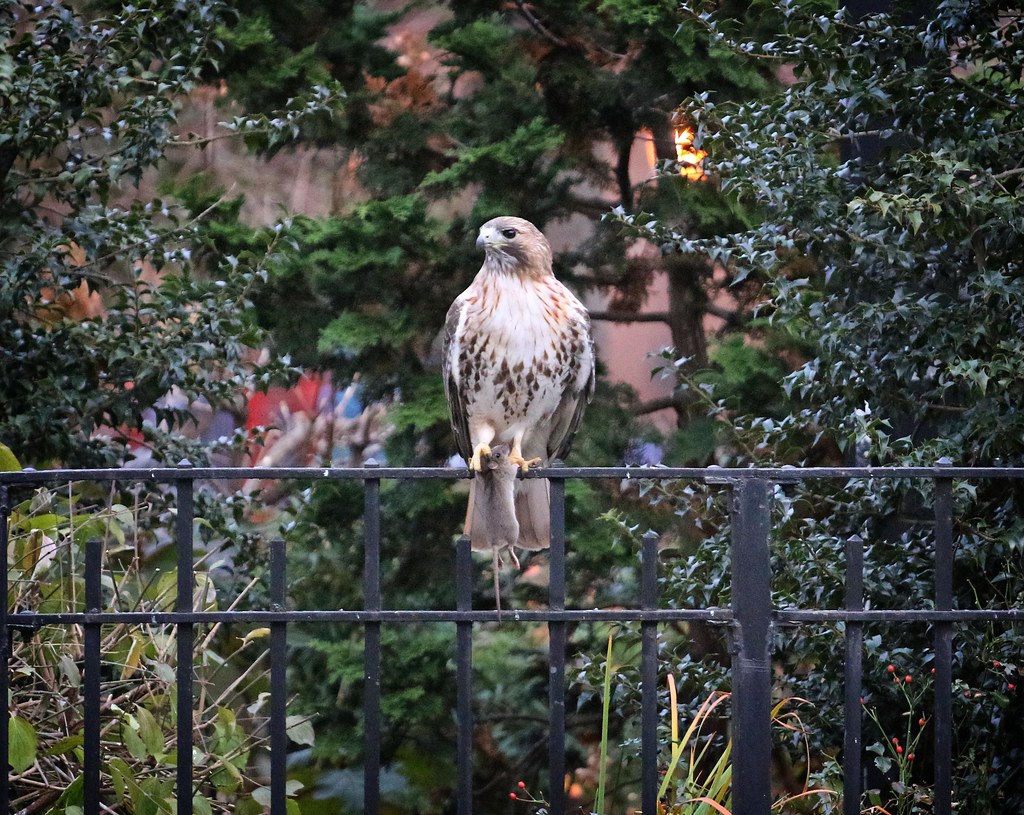 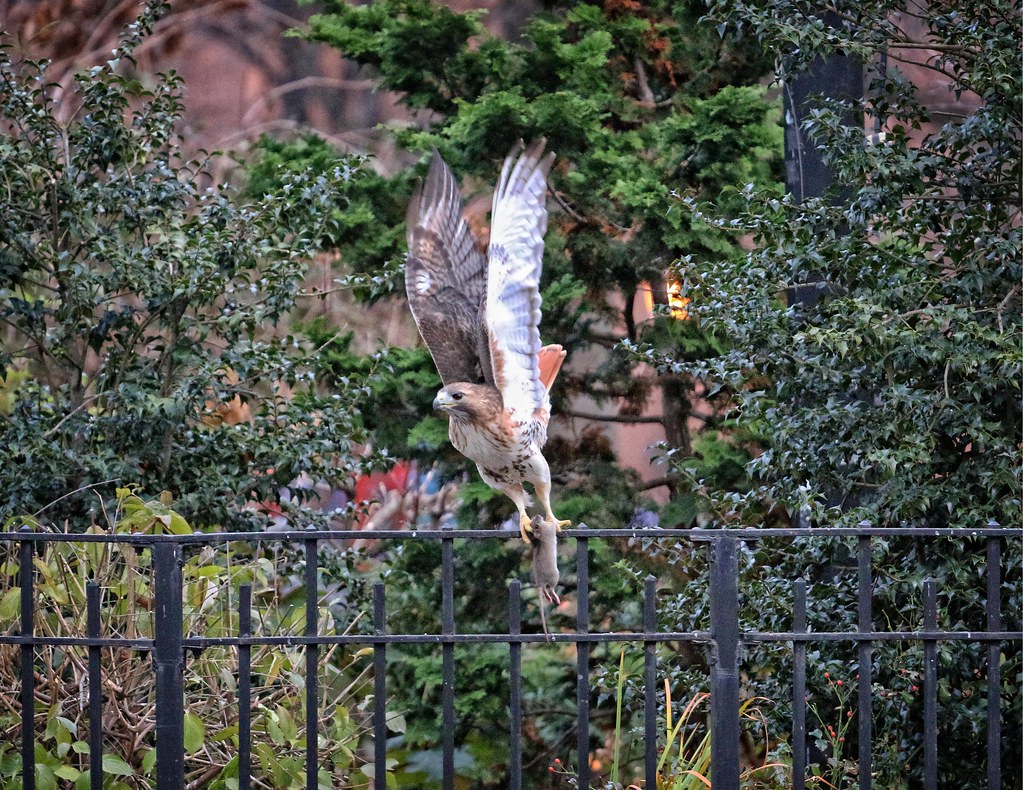 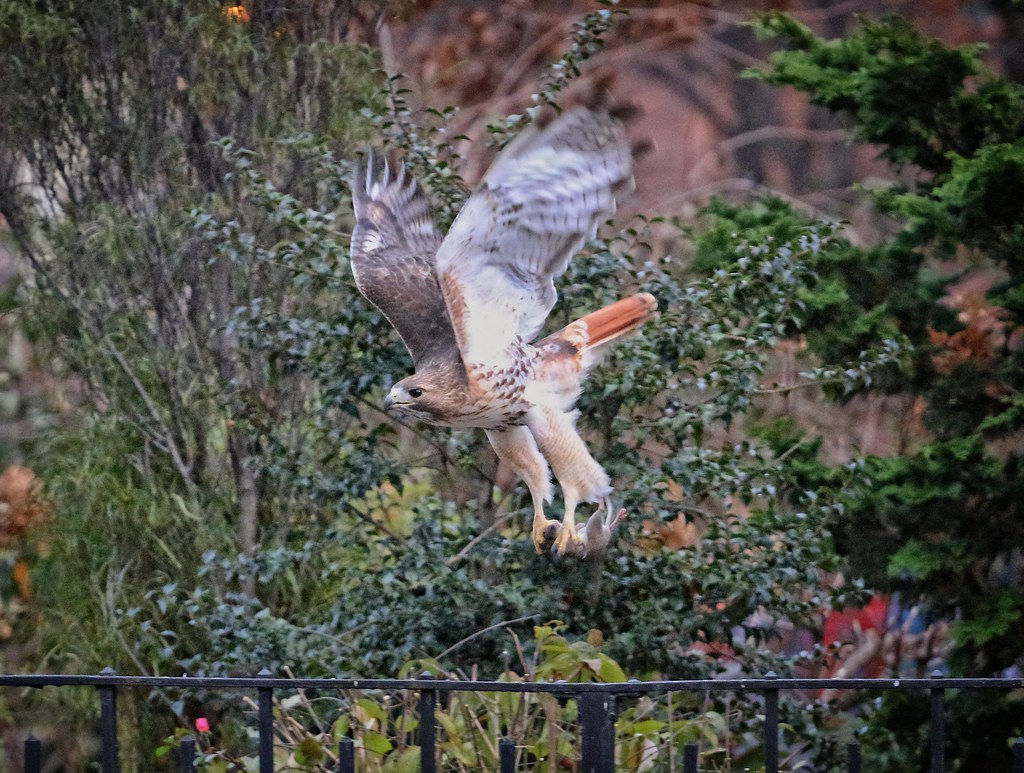 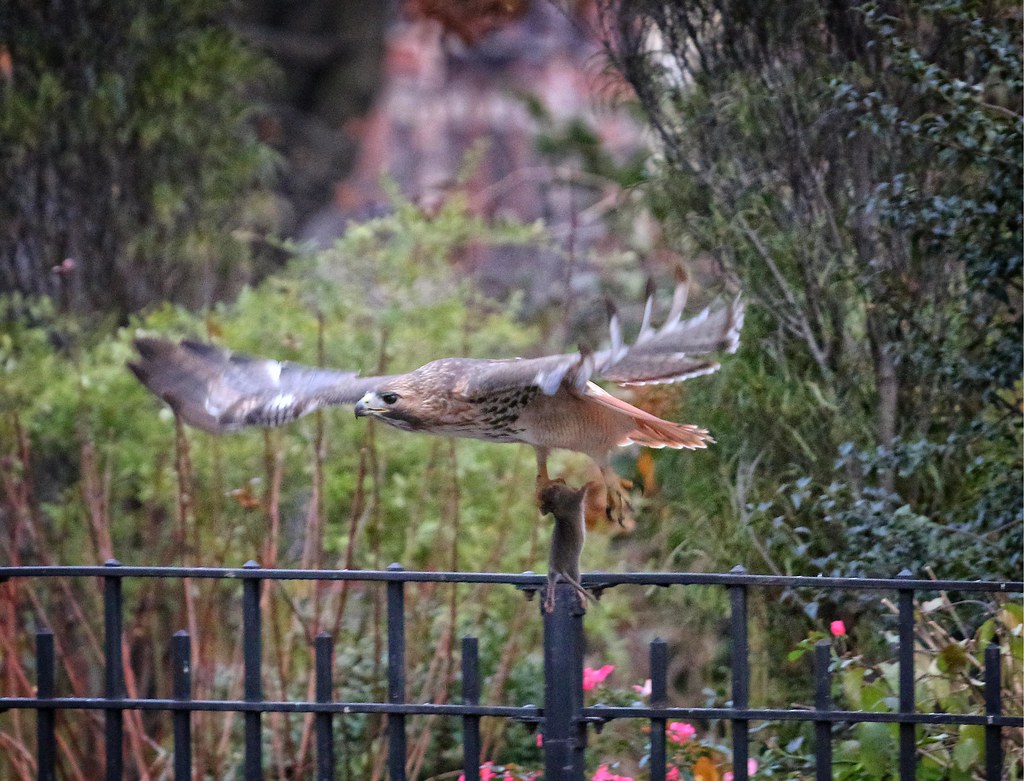 He flew the rat to a big tree near Avenue A, but didn't eat it. He appeared to stash it there for Dora, who eventually came around, but wasn't interested in eating.  She then flew to the east side of the park and Christo followed her, carrying the rat.

They landed on one of their favorite 'kitchen table' branches and Christo (left) seemed perplexed at Dora's disinterest in the food.  But if you look at the photo below, it's clear she had a very full crop (right) and didn't need more to eat right at that moment. 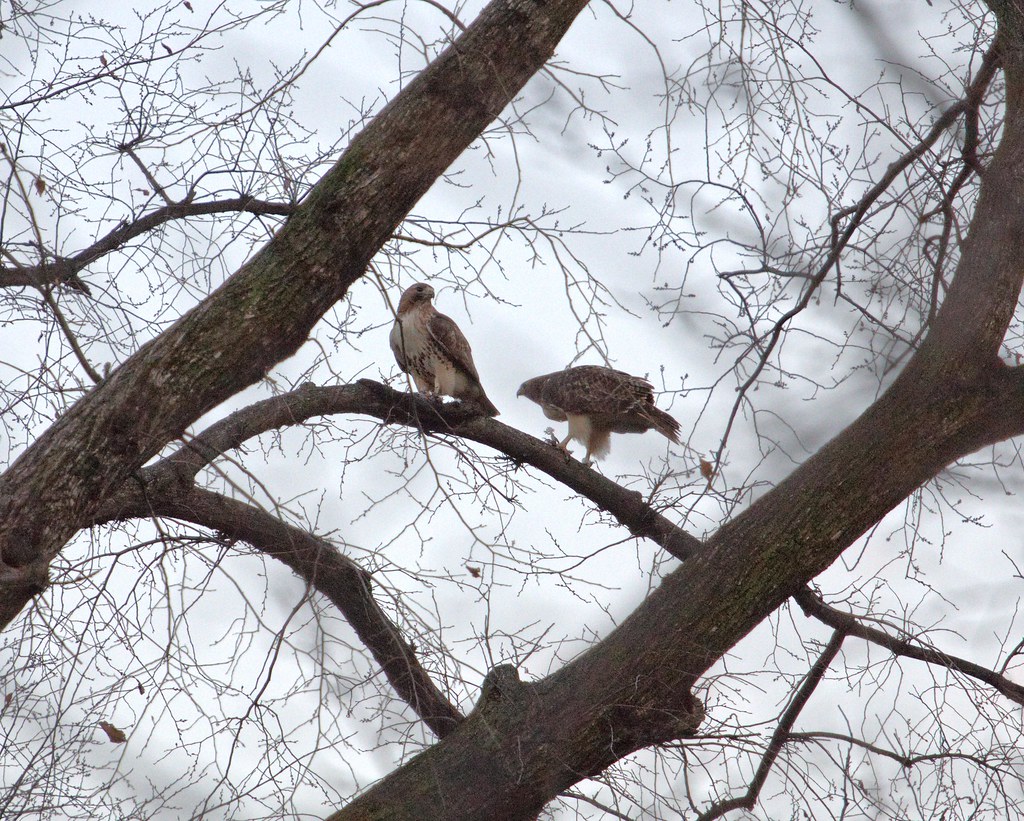 Christo didn't appear hungry either, so I guess he stashed the rat in the tree to eat later.  I was curious to know whether the Cooper's hawk might come around and steal the stash, but it was soon dark and the hawk pair went to roost in a tree in the SE corner of the park.
Posted by Goggla at 8:20 PM