Continuing on from my previous post, Christo and Dora were active around Tompkins Square on Friday.  Late in the afternoon, Christo touched down in the SE corner of the park.  By the time I got there, it appeared he had caught a pigeon. 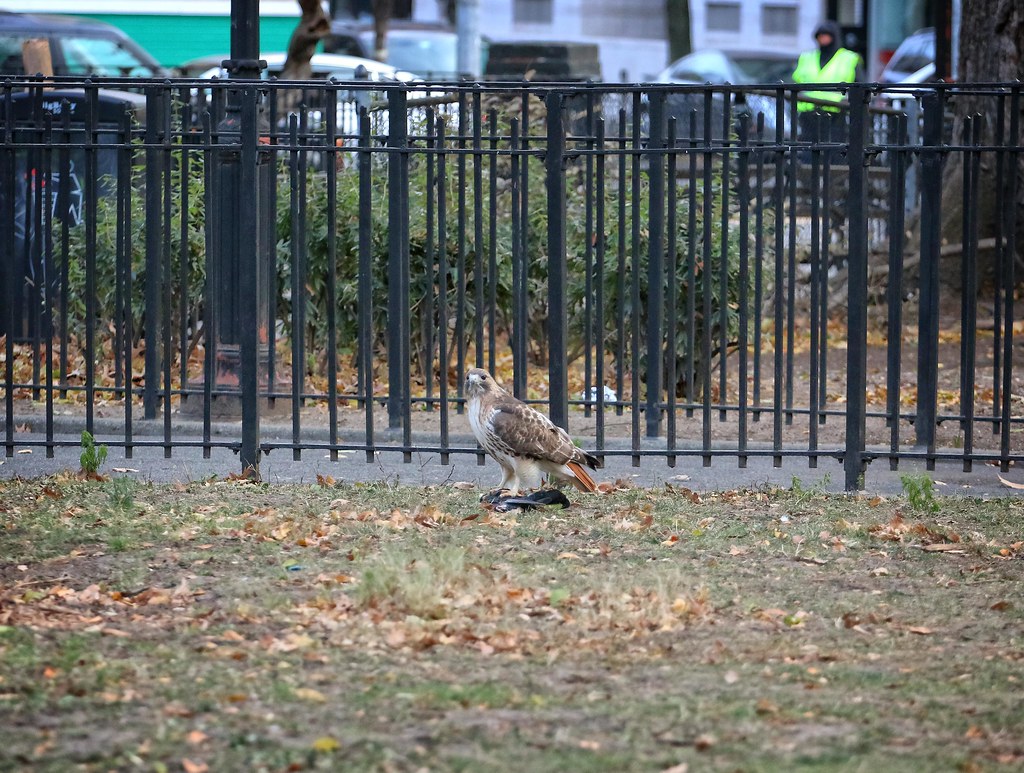 However, when he took to the air, it was clear the pigeon was frozen. 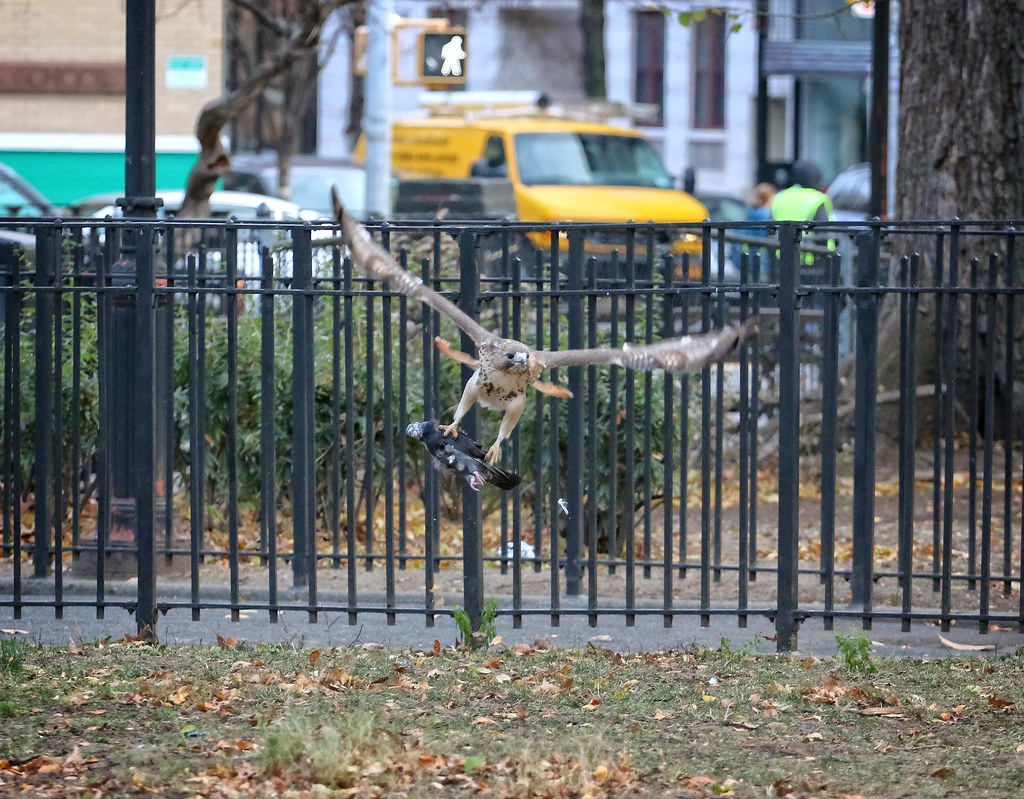 These photos don't show it, but the pigeon was stiff as a board. 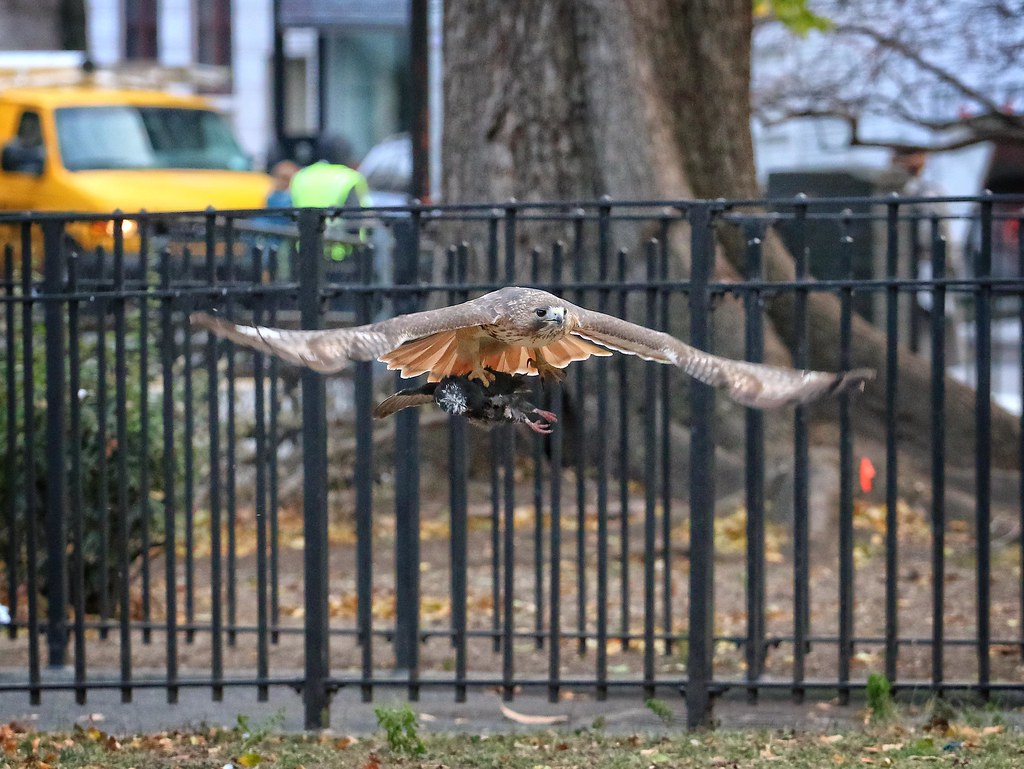 A fellow park-goer told me she saw Christo catch a pigeon in the same area the previous day.  The temperatures had stayed below freezing, so it's possible this pigeon was caught the day before and had been stashed for later. 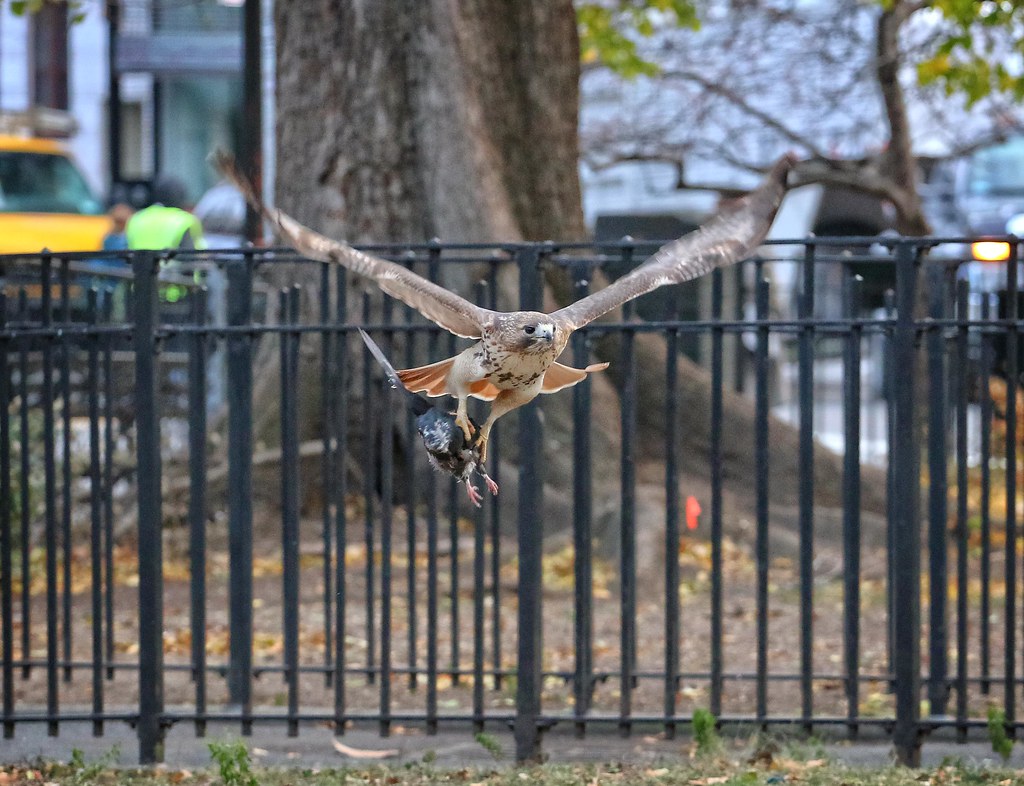 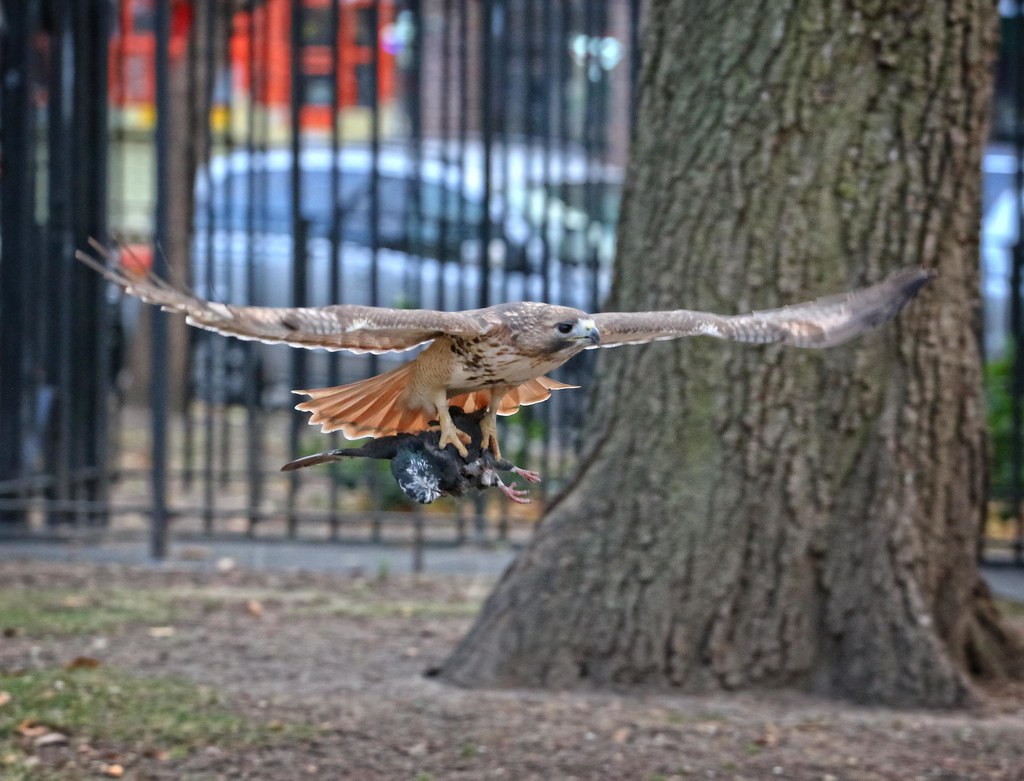 Unfortunately, Christo had no way of thawing out his food.  I wondered if he might be smart enough to take it to a steam pipe on a roof...or to the hand-dryer in the men's room (!). 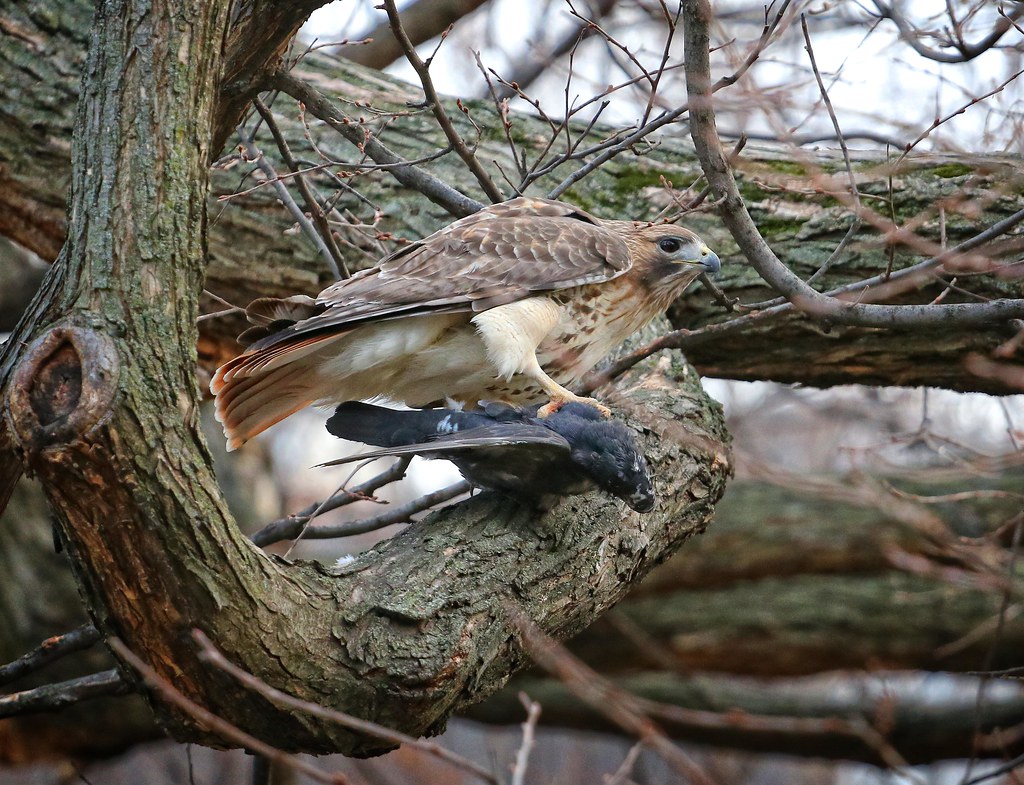 But no.  He struggled with the pigeoncicle for several minutes, flipping it over and trying to get a good grip.  Eventually, he flew it to the tree in the middle of the park and went to work chipping away the icy feathers. 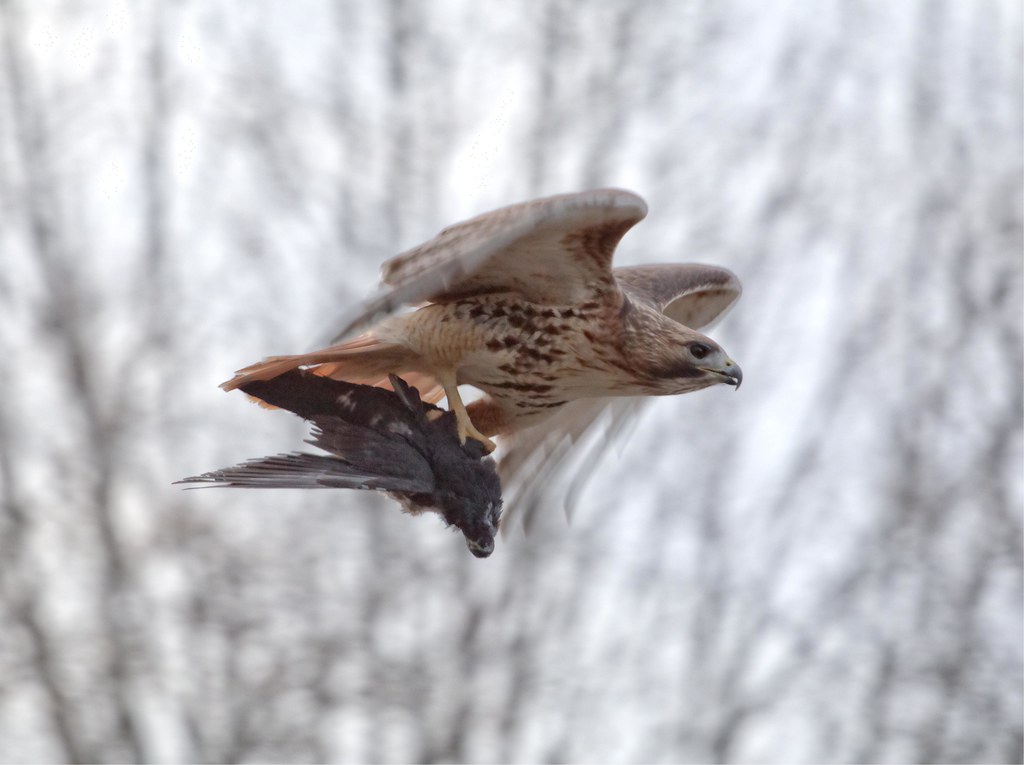 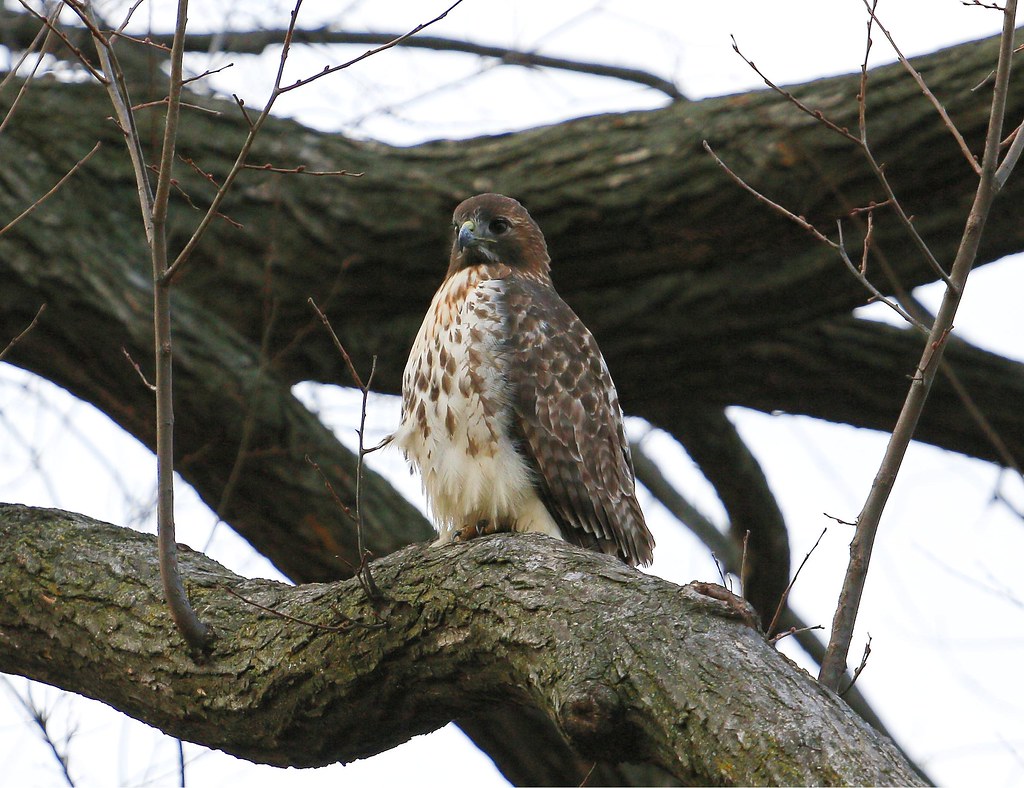 She took off flying around the Krishna tree calling over and over.  This was unusual behavior for her and I wondered what was upsetting her.  Suddenly, a kestrel zoomed in from over 7th Street and attacked her in flight.  It happened so fast, I couldn't get a photo.  The kestrel disappeared over the buildings to the south and Dora continued flying around screaming until she decided to take a rest above Christo as he prepared dinner. 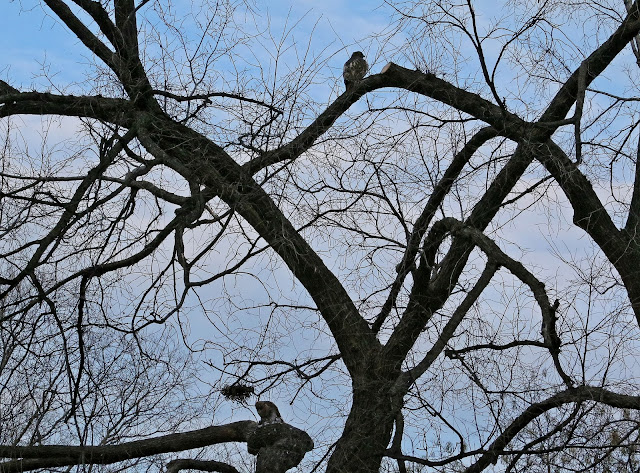 It took him a long time to break through the frozen pigeon feathers and get to the edible bits.  I tried to imagine what it would be like to chew on a frozen rotisserie chicken.

Apparently, he took too long to eat and Dora must have been hungry, as she rather rudely flew down and kicked him off the food. 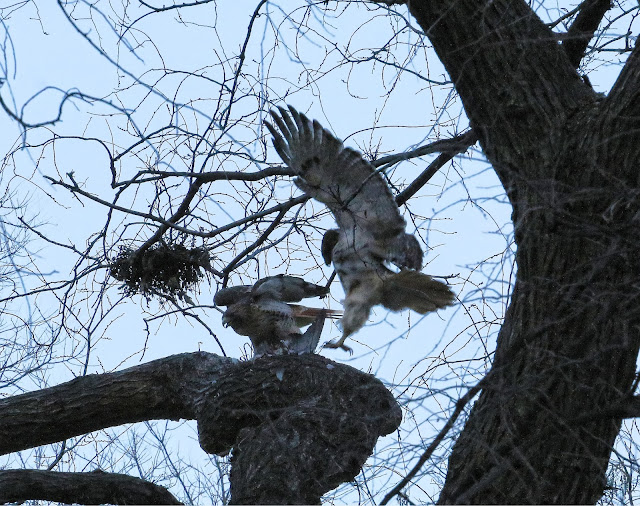 You can see the bulge of Christo's full crop as he takes off to the left.  I guess he had enough. 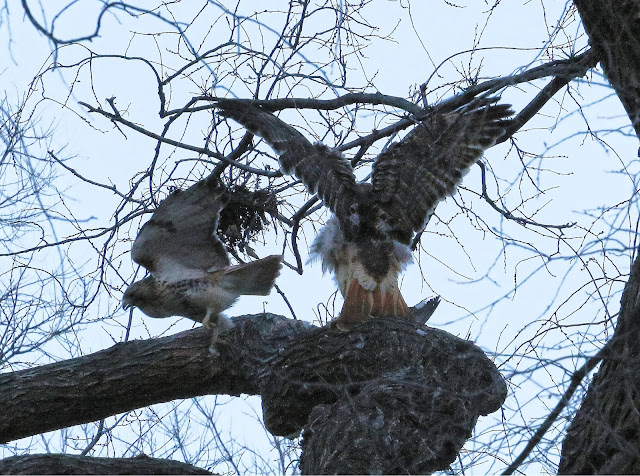 I followed him to 10th Street where he settled in one of his roosting trees north of the park. 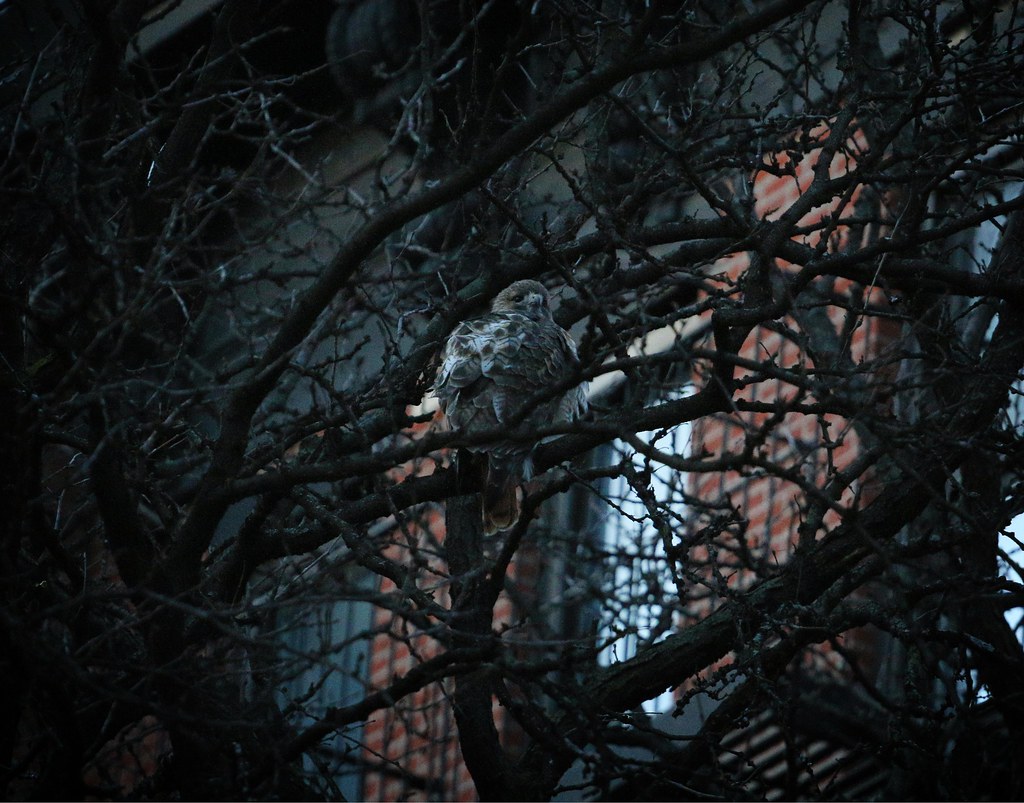 As Christo was done for the day, I passed back through the park and saw that Dora was still eating the pigeon. It was dark by this time, so I left her to finish her dinner and headed home.
Posted by Laura Goggin Photography at 8:18 PM