I don't have any updates on Dora at this time other than she is eating well and resting.  She will not be released from rehab until she's 100% healthy, and that could take some time.

Meanwhile, I spent the weekend trying to figure out what's going on between Christo and the New Girl.  I'm going to refer to her as Nora for now (other suggestions I've heard have all been rather negative!).  I could call her Tompkins Adult Female #2, but that just doesn't seem right.

On Friday, it seemed she and Christo were getting along, but on Sunday, their behavior wasn't as friendly.  I watched as Nora flew at Christo, who was sitting atop the Christodora, and intimidated him off his perch.  In the photo below, Nora is on the left and Christo is on the right. 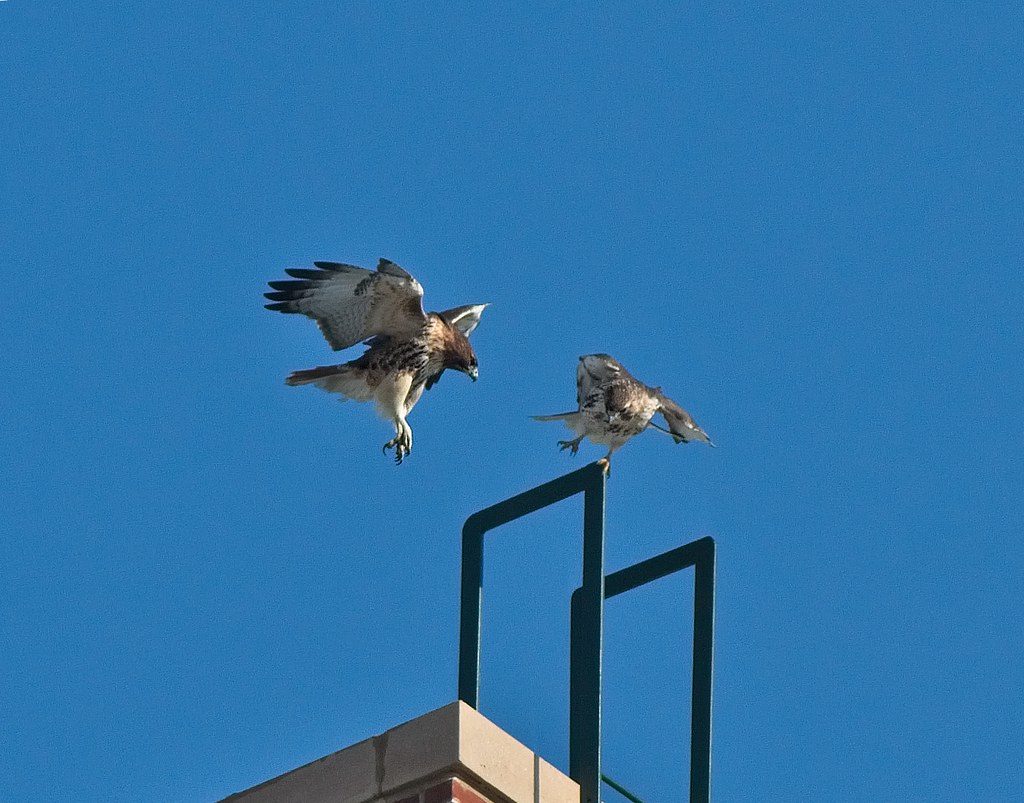 Christo flew off and I did not see them that close to each other for the rest of the afternoon. 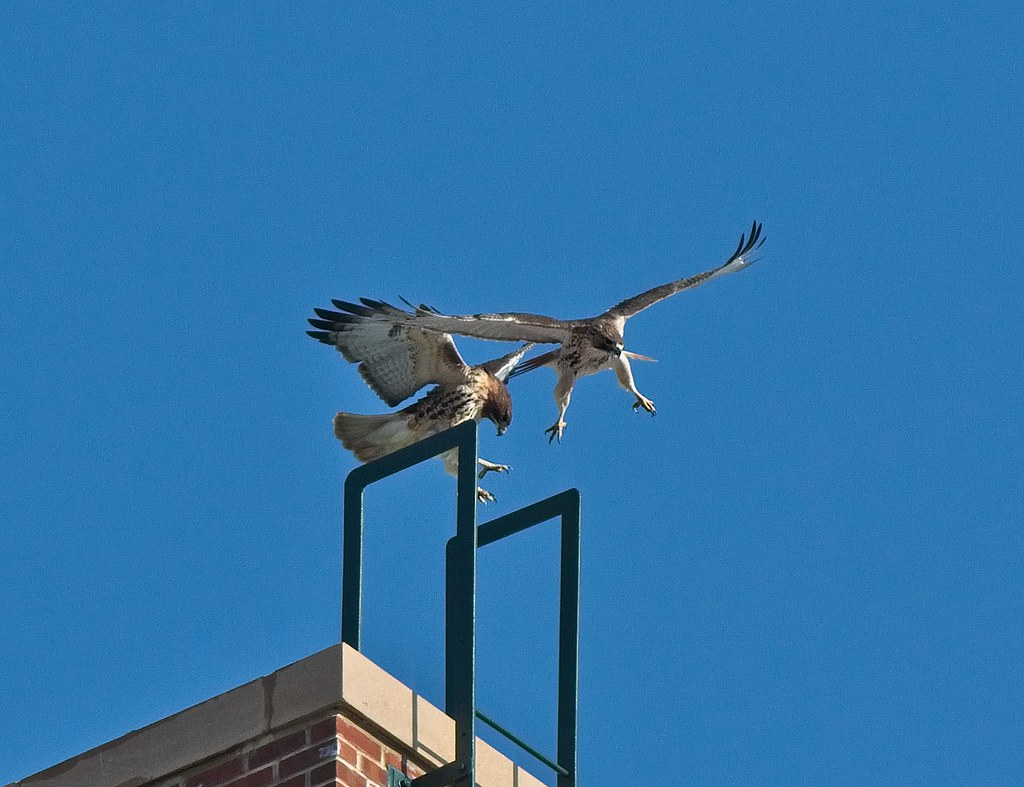 Who is this new hawk?  What's her plan?  She stayed in and around the park for the remainder of the day and seemed to feel right at home.  She is not as wary as Dora and appears not to mind human activity.  Although I didn't see her land on a fence, she did get somewhat close, and had no problem diving for prey right along Avenue A. 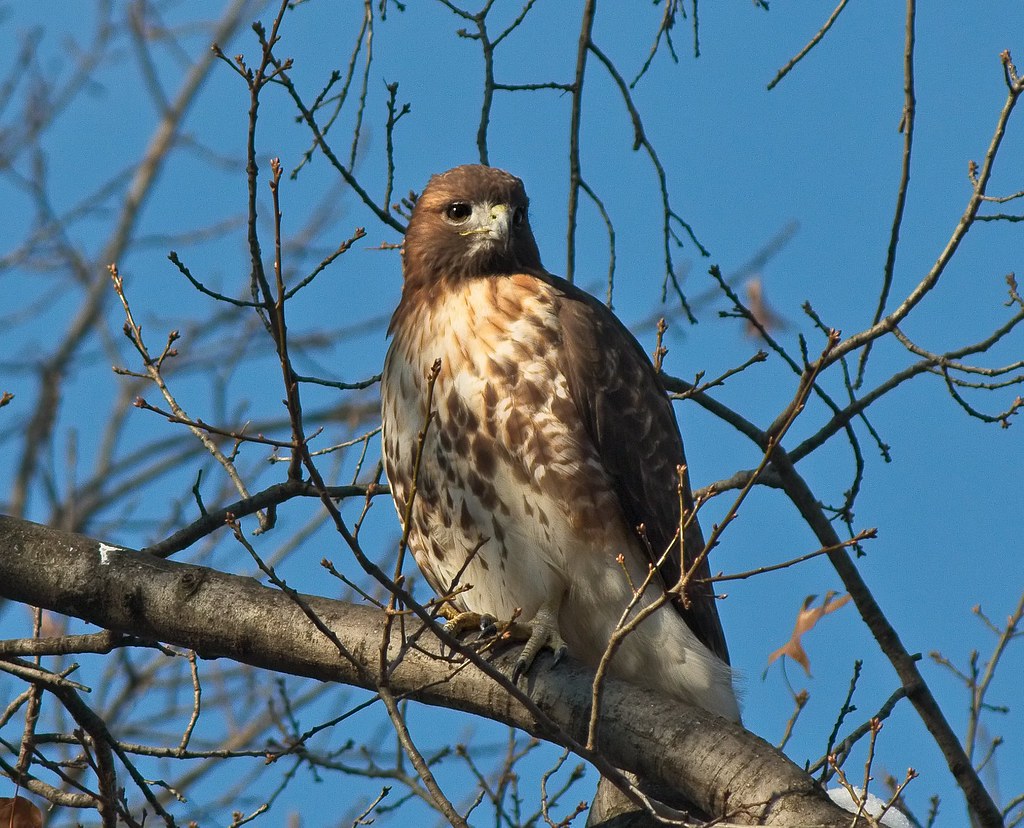 As it was sunny, I was able to get a better look at her.  She has very dark wingtips, which are noticeable while flying. 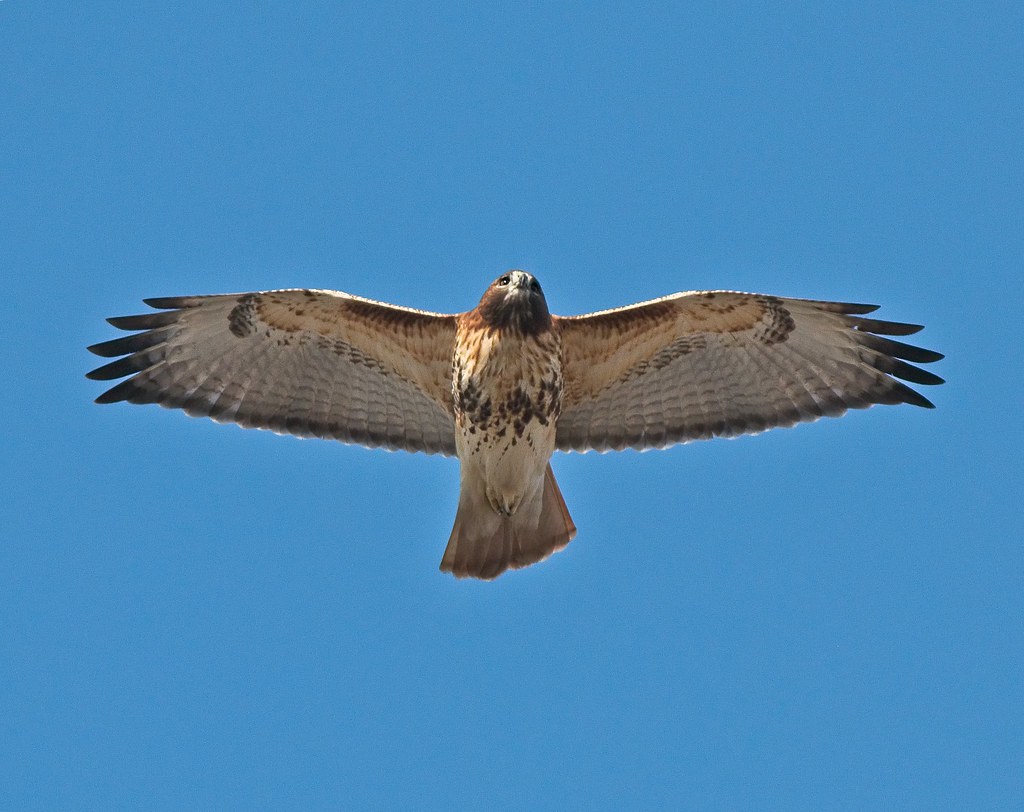 She also has a lot of brown streaking on her chest and wing covers. 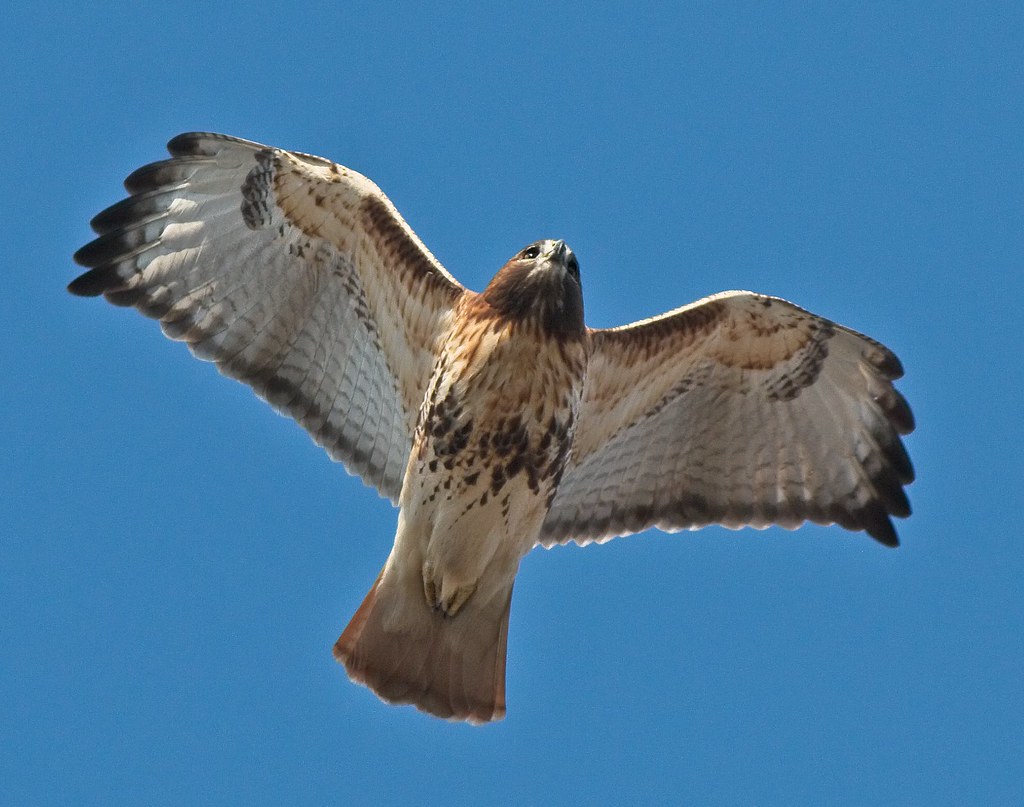 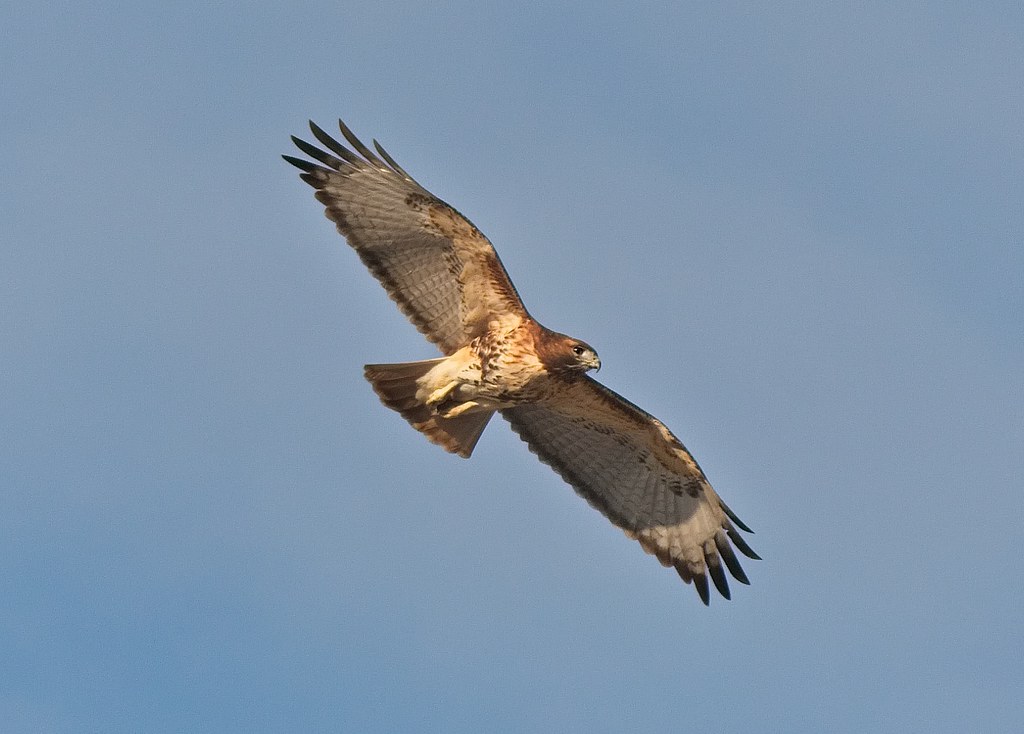 Nora is a very colorful hawk with rusty reddish brown markings and light gray feathers under and above her eyes.  Compare to Dora (below) whose head, wings and body markings are all dark chocolate brown.  Both hawks have dark heads and dark belly bands. 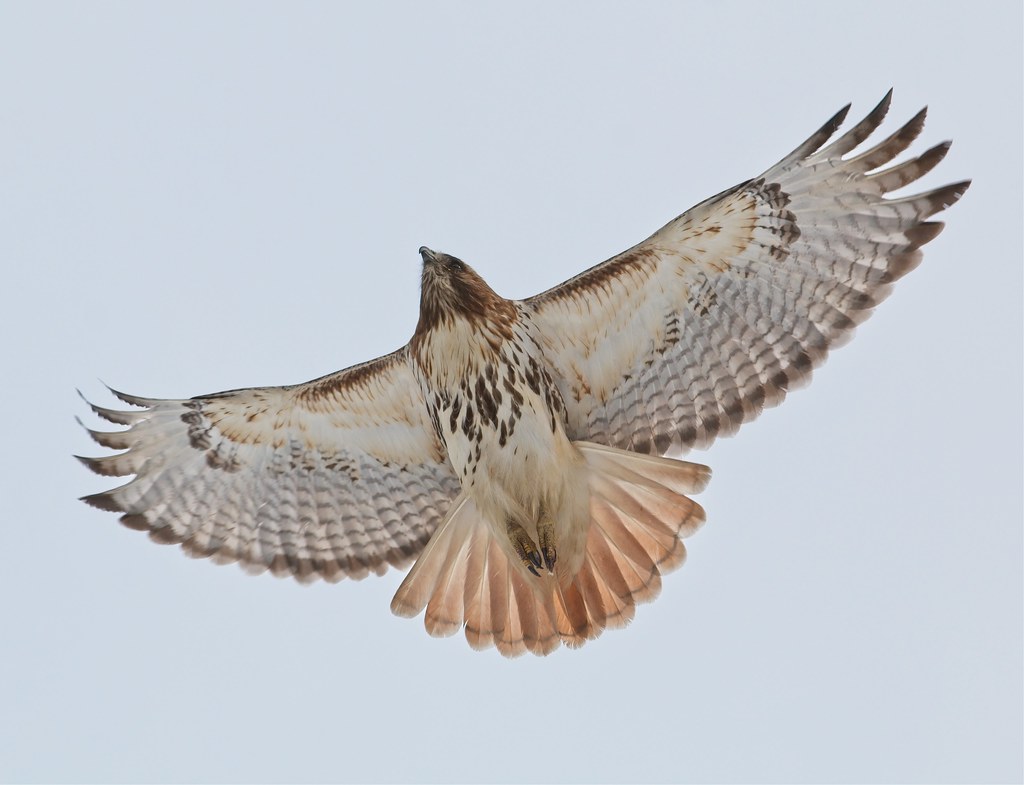 After catching, and then dropping, a rat along Avenue A and 9th Street, Nora perched on a traffic light for a couple of minutes. 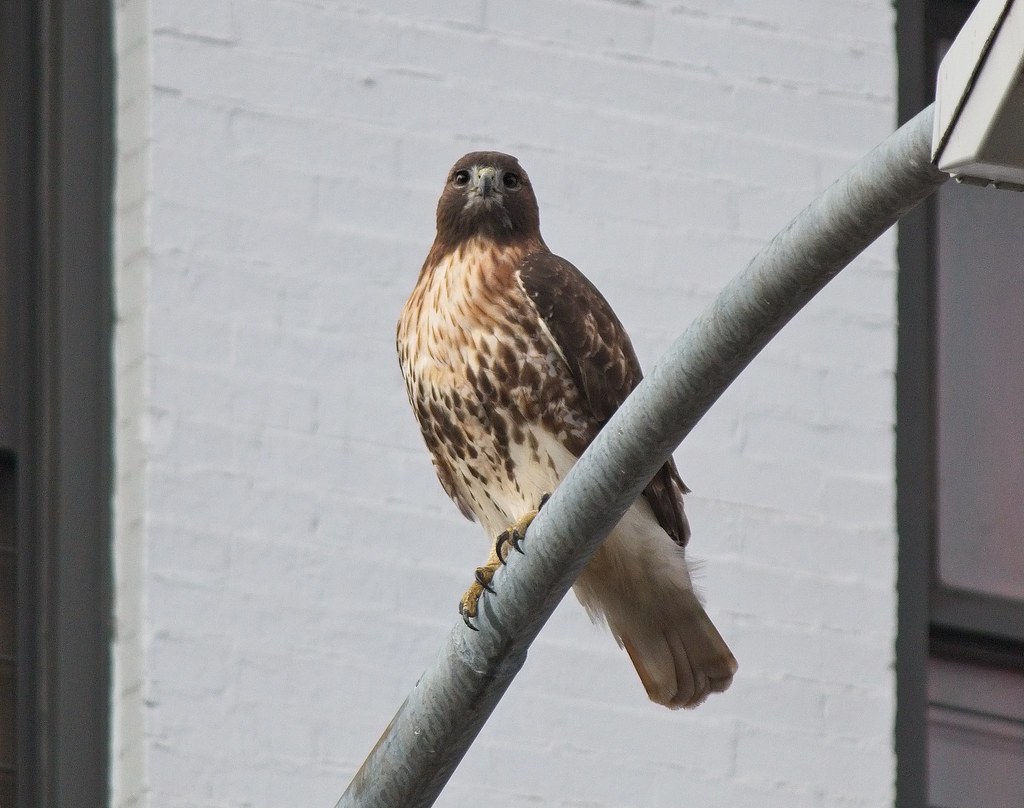 Opting not to go back for the rat, she flew to a fire escape a block down.  As she took off, we got a good look at the rusty coloring along her flanks and the light barring on her upper legs. You can also really see the gray "eyeliner" beneath her eye. 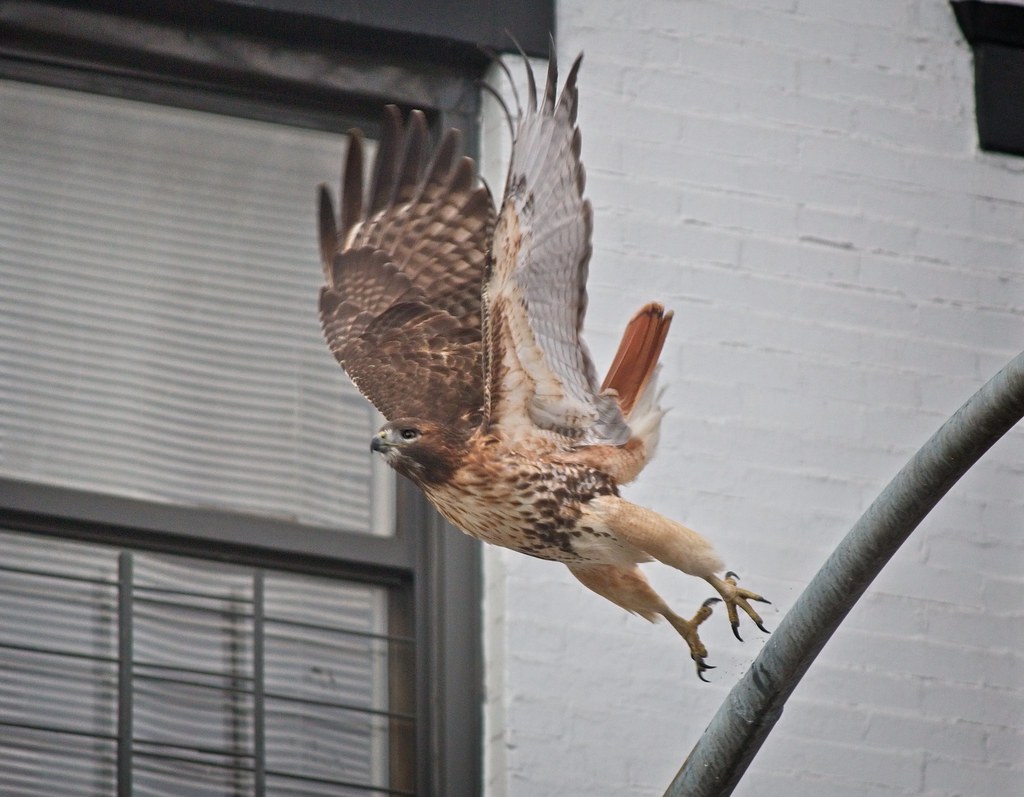 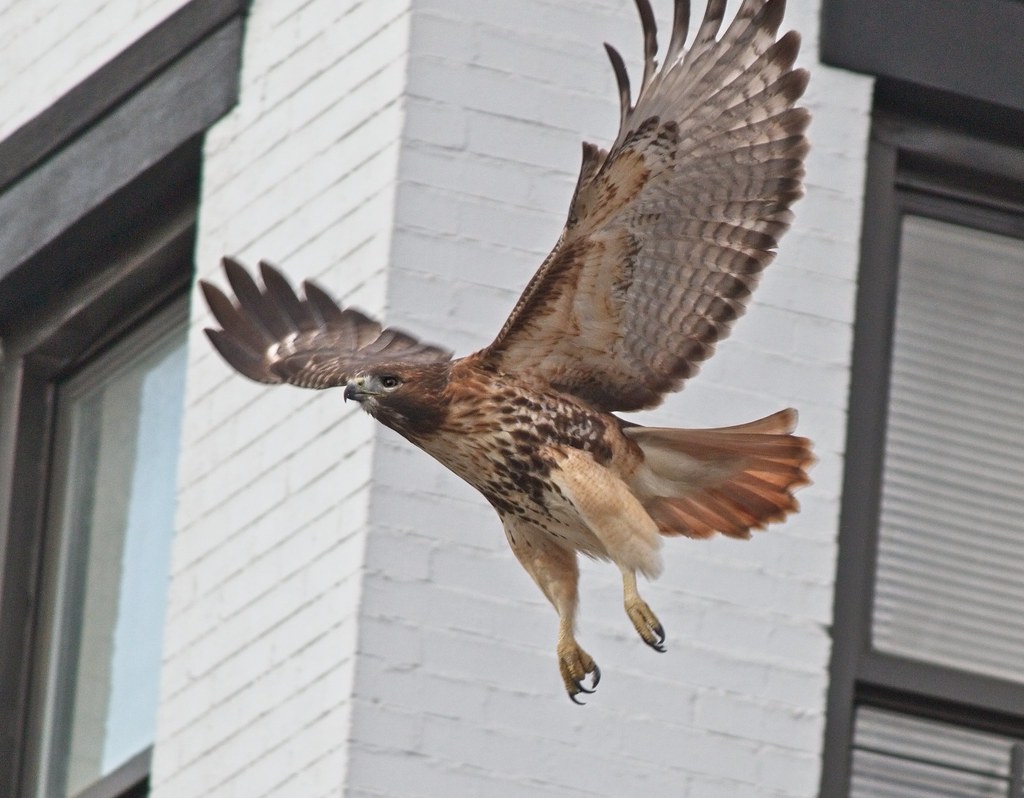 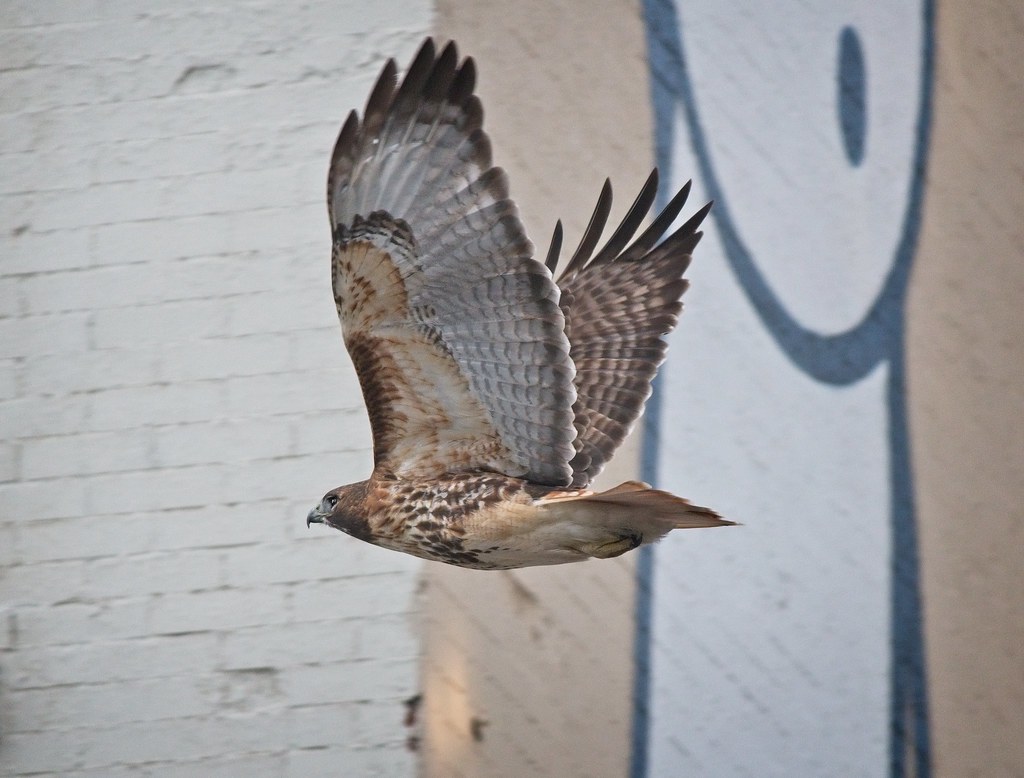 All afternoon, Nora kept perching in places where we'd normally see Dora.  This might be a coincidence, but she seemed to be very familiar with the park and surrounding area.  One of those perches was the cross at St Nicholas of Myra church on Avenue A and 10th Street. 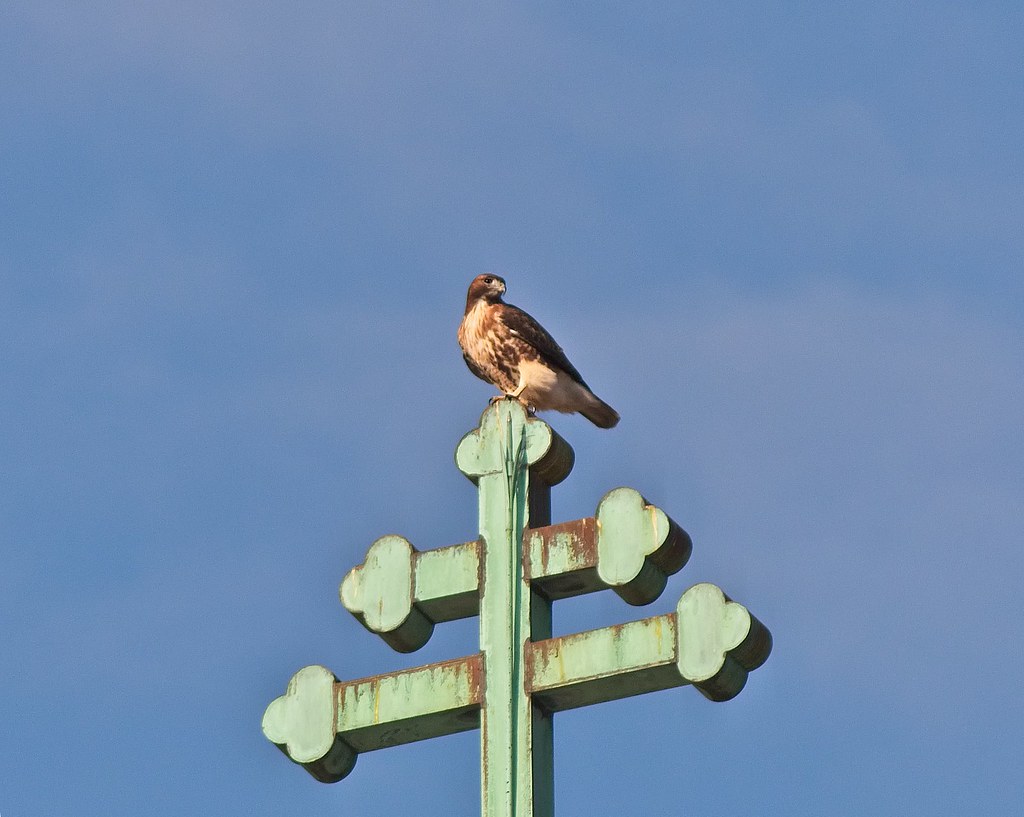 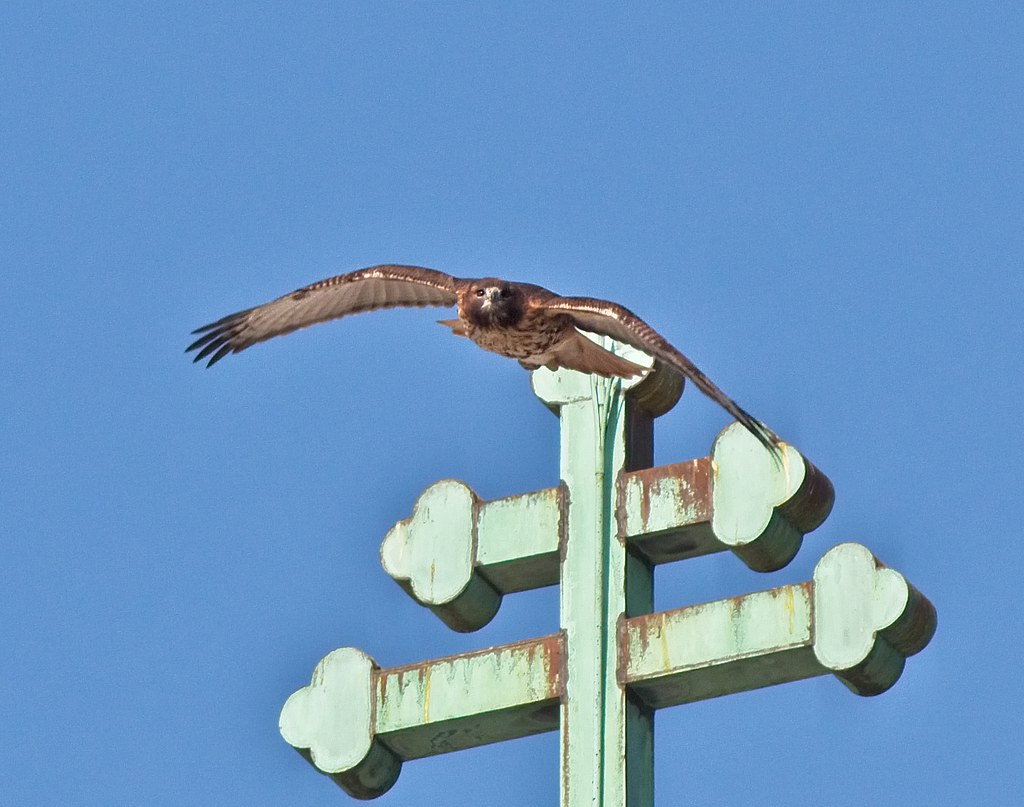 Another was the cross at St Brigid's on Avenue B and 8th Street. 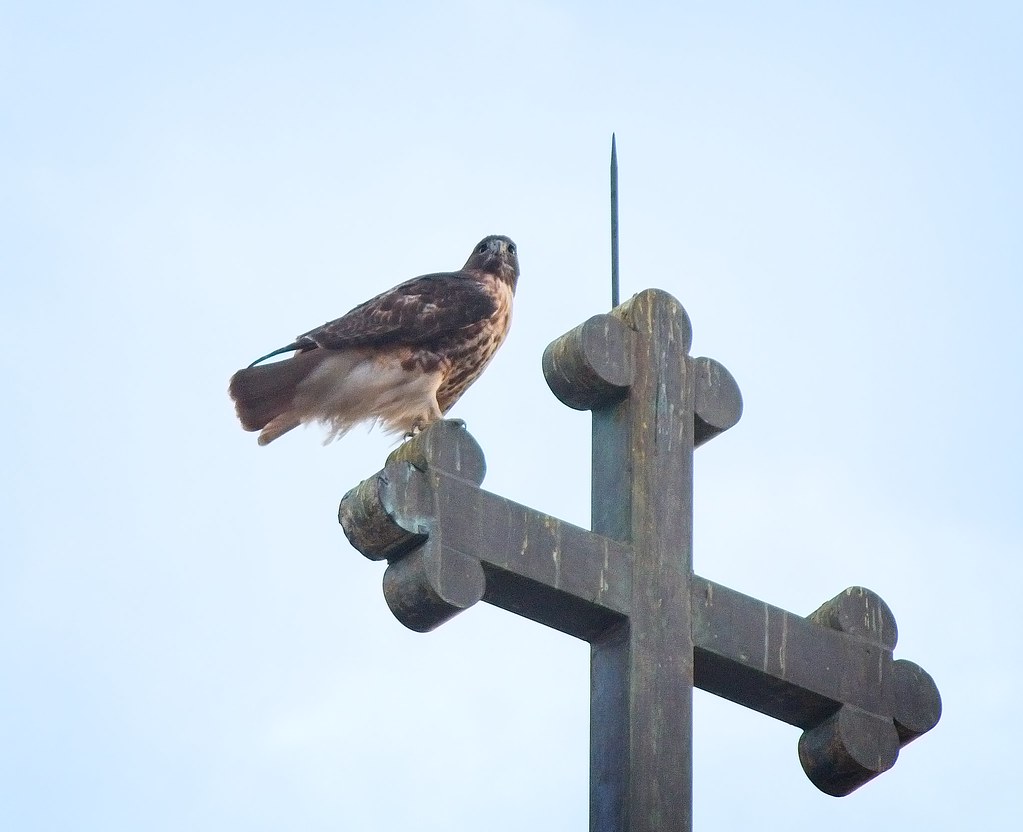 In addition to the church crosses, Nora has been seen at both nest sites, the Christodora building, and a few trees that Dora favored.  It made me wonder if this hawk had been watching the territory before moving in, or, has she been here before?  From what I observed over the weekend, this hawk appears not to care whether Christo is around or not.  She seems most interested in the territory itself.

Instead of eating her rat in the park, Nora flew it around the corner to an air-conditioner on Avenue B.  I've never seen Christo or Dora do this - if they catch their food in the park, they usually eat it in the park.  If Dora was eating, Christo usually stood guard nearby, but he did not do that for Nora. 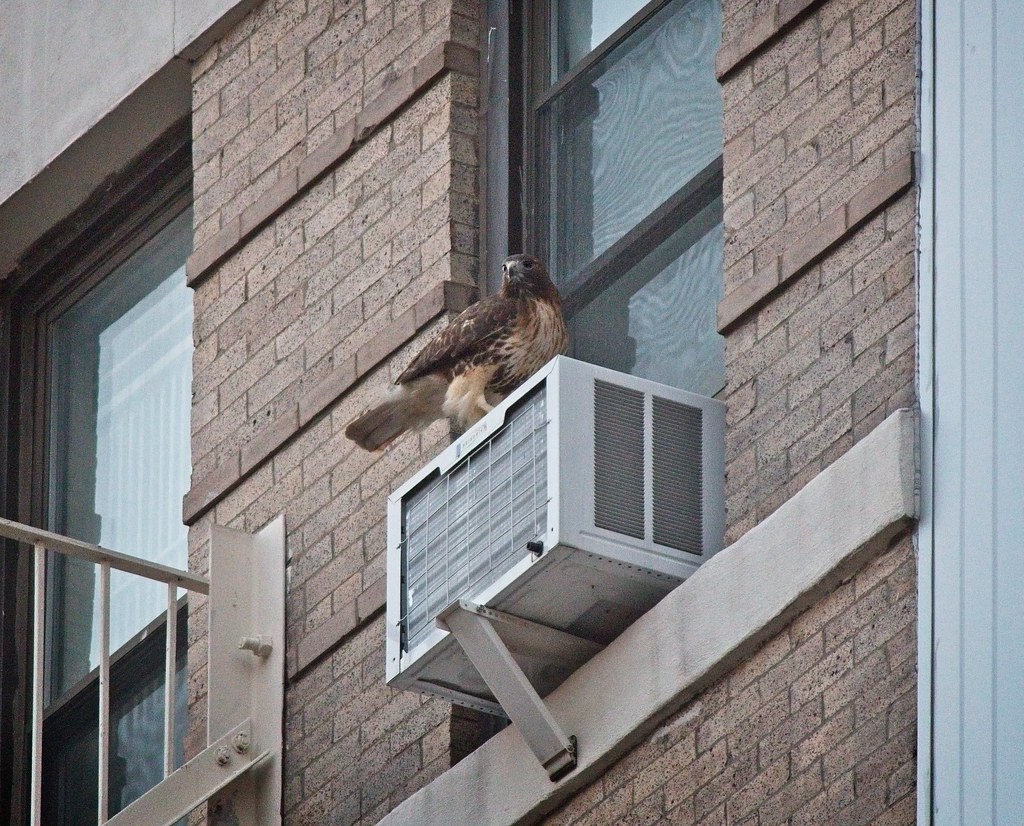 When she finished the rat, Nora flew to a cellphone tower on 6th Street and Avenue B where she was mobbed by a Cooper's hawk.  At sunset, she flew further down the Avenue, probably to a roosting place.

So, what does Christo think of all this?  I wish I could read his mind, but I can only speculate.  He has been behaving very passively towards this new hawk who is definitely the dominant of the pair.  He's not made any attempts to chase her away and has allowed her to hunt in his territory.  If they do not have a strong pair bond, who knows, maybe more hawks could come around and compete for the territory.  We'll have to wait and see what happens. 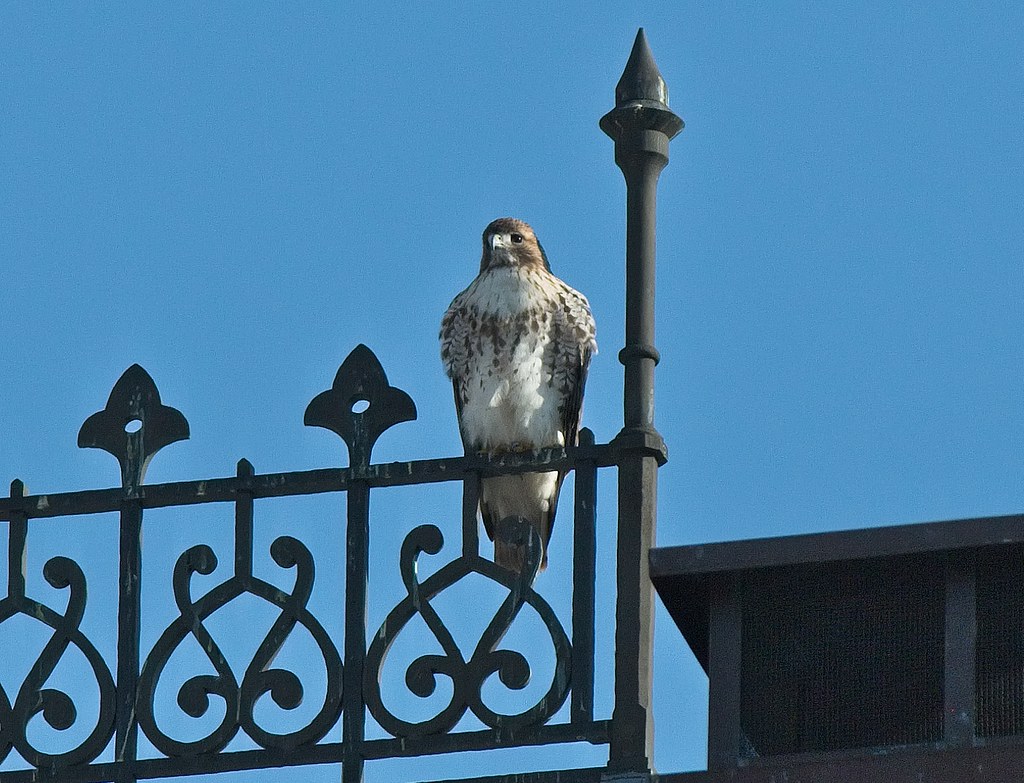 What are you thinking, Christo?