It's been a brutally hot week, but the Tompkins Square red-tailed hawks seemed to handle the heat wave just fine.  I was unable to endure much time in the sun before succumbing to heat sickness, so the shots below are all from very brief visits to the park late in the day.  The chicks are growing and changing rapidly, and I estimate they could fledge in the next couple of weeks.

This chick still has a white fuzzy head. 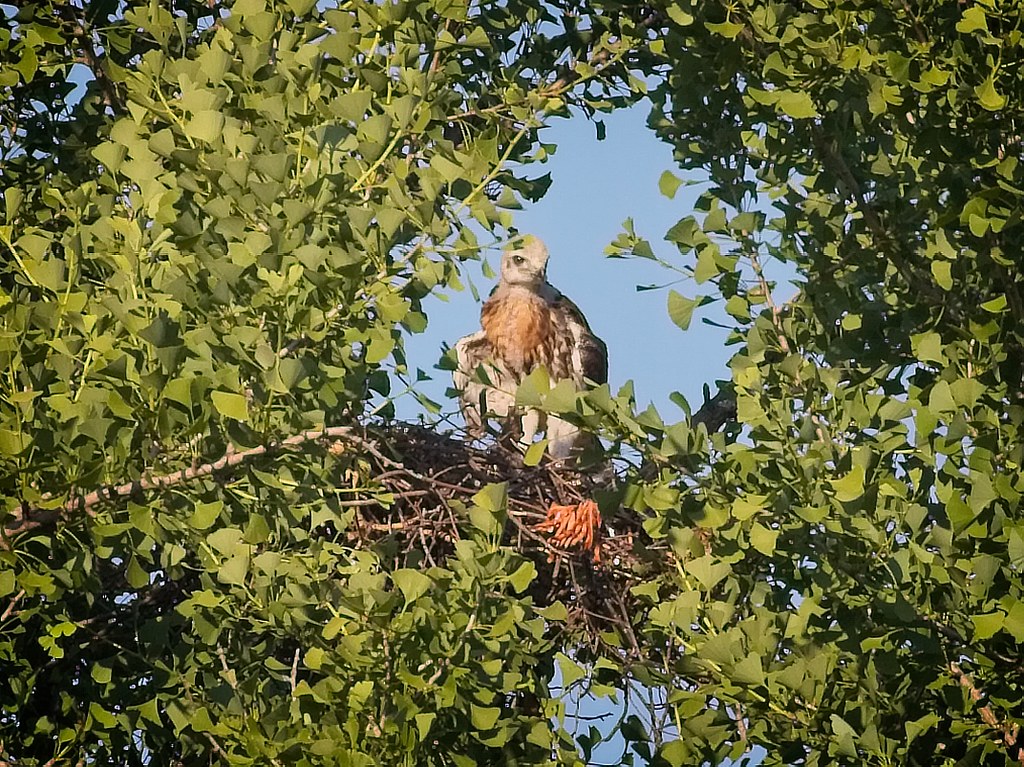 Flashing some leg.  Mom Amelia stands on the left with her back to us. 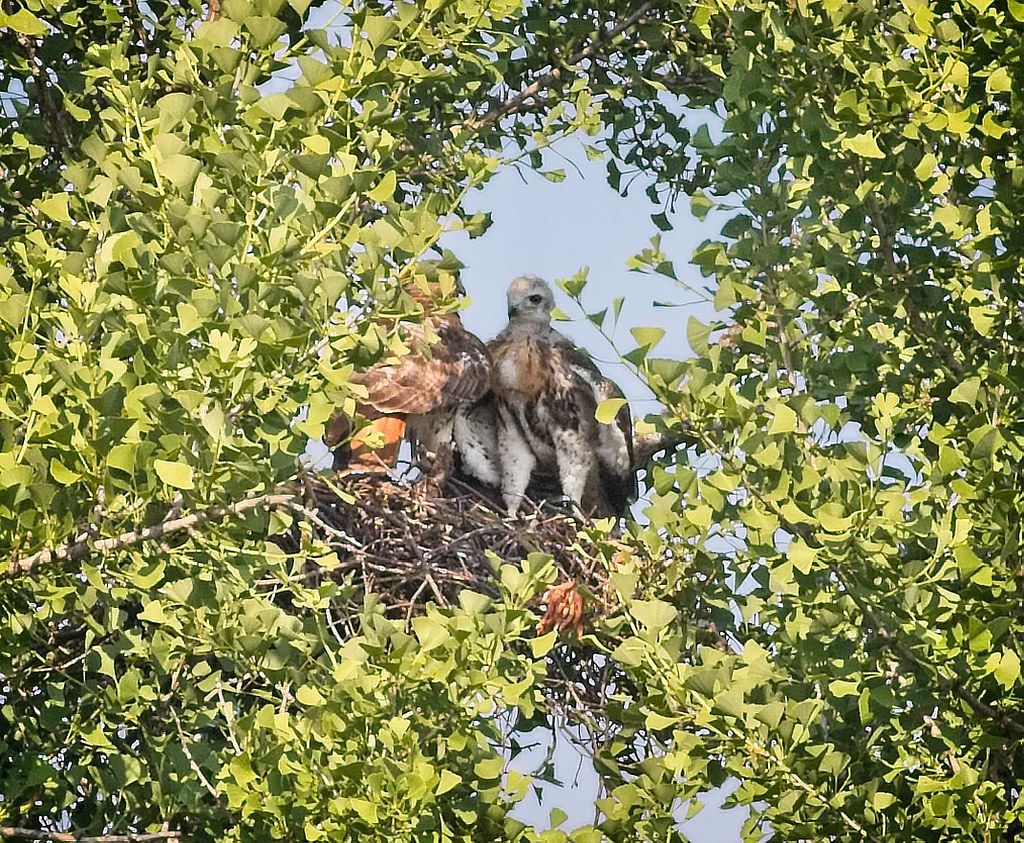 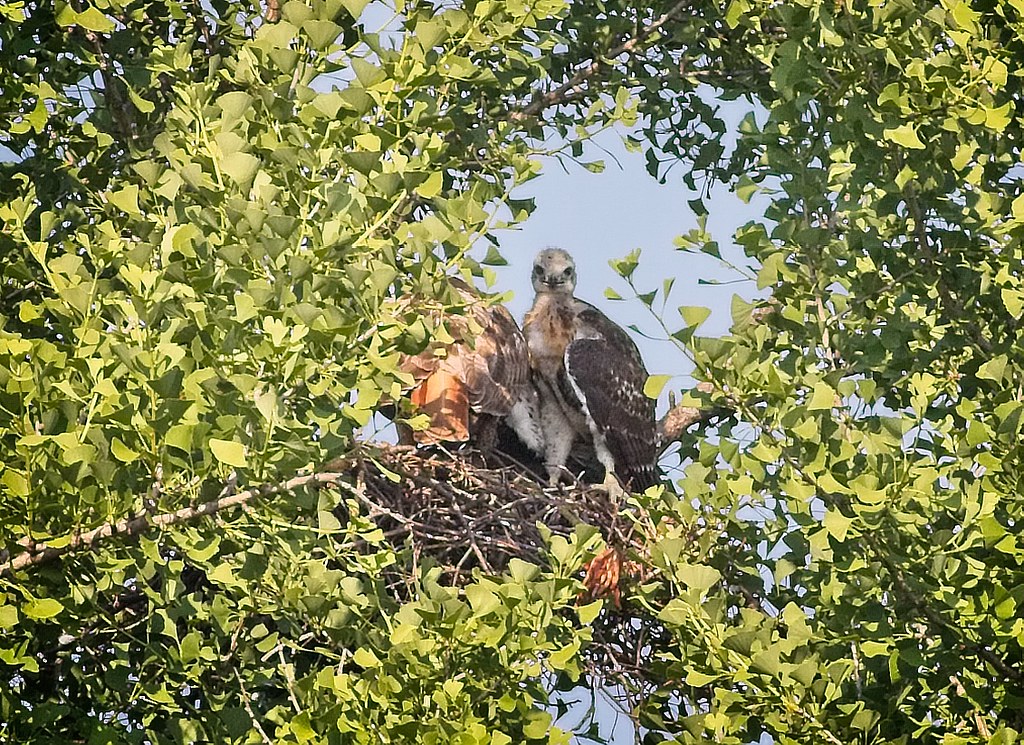 This was the view from the other side of the nest, with Amelia providing some much needed shade. The second nestling is hidden behind leaves on the right. 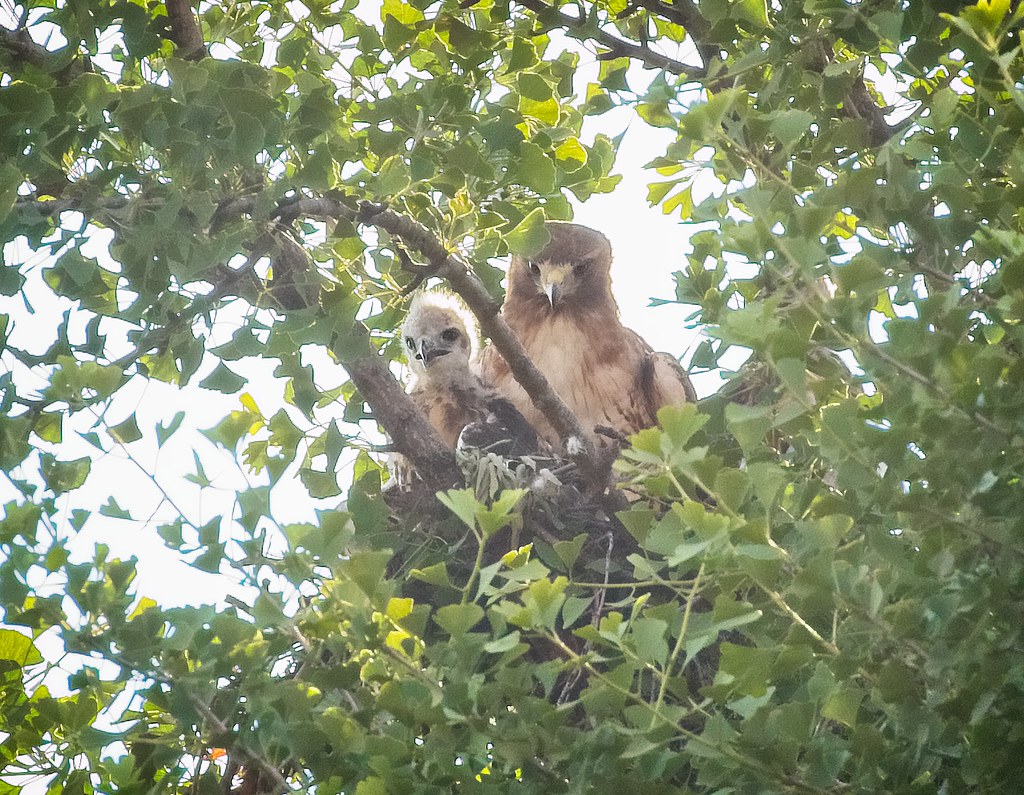 Heat index? What heat index?  Amelia pants in the background. 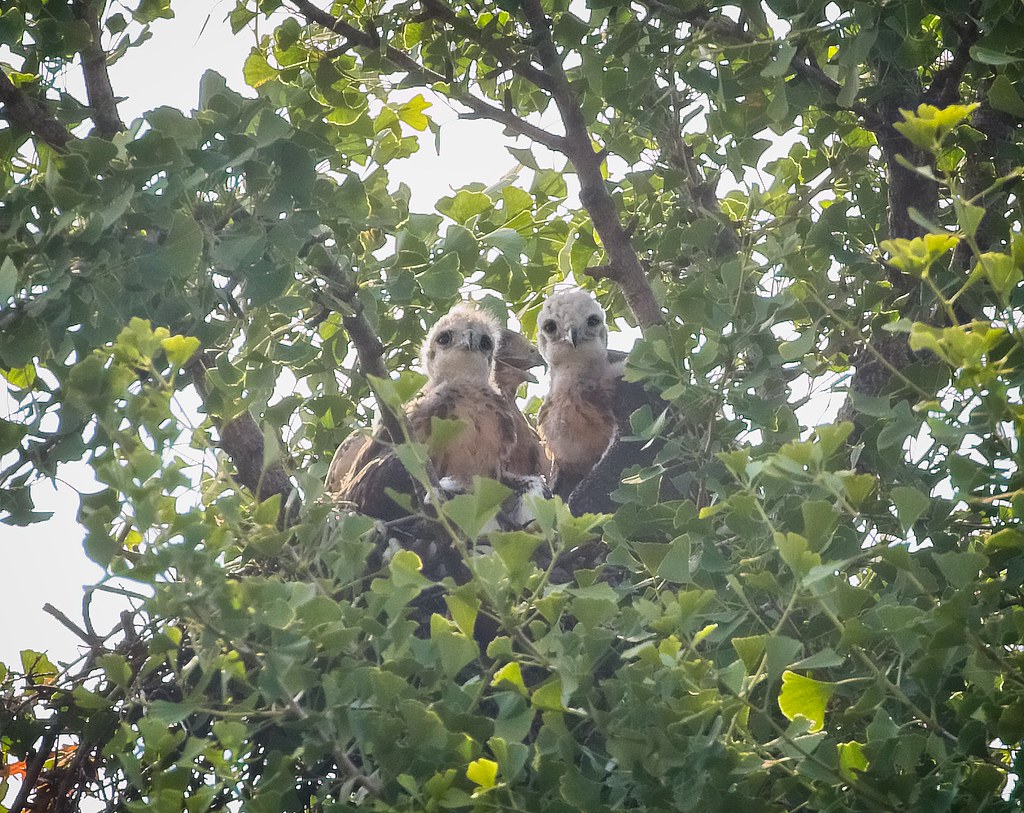 One chick "wingercizes" on the left, hidden by leaves, but you can get an idea of the wingspan. Also note the far left side of the nest looks like a segment has fallen away.  I don't think it's a danger to the chicks. 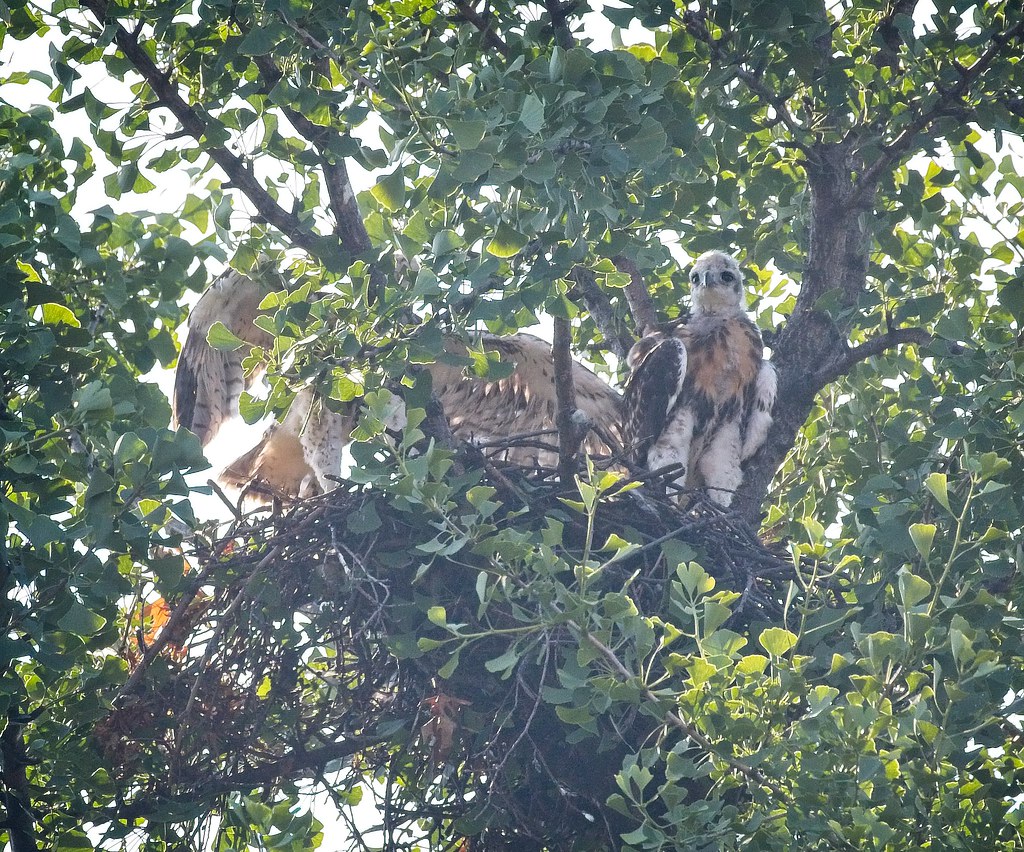 Amelia stops by to drop off some dinner. 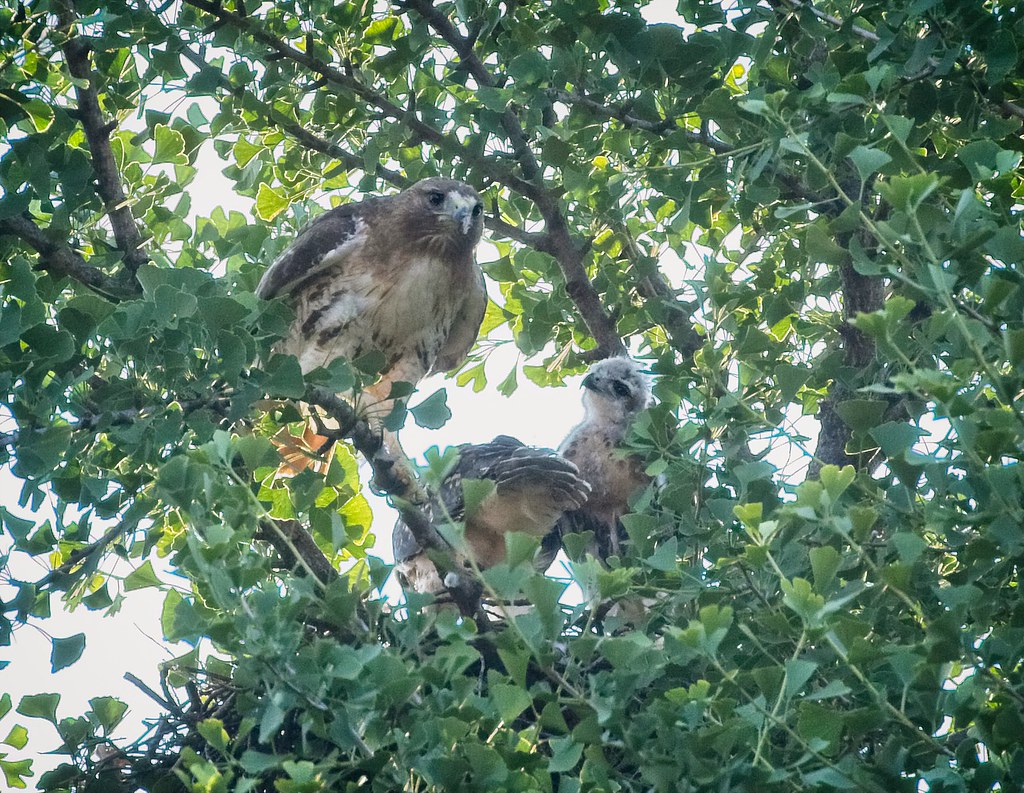 The chick on the left eats while the one on the right watches Amelia depart. 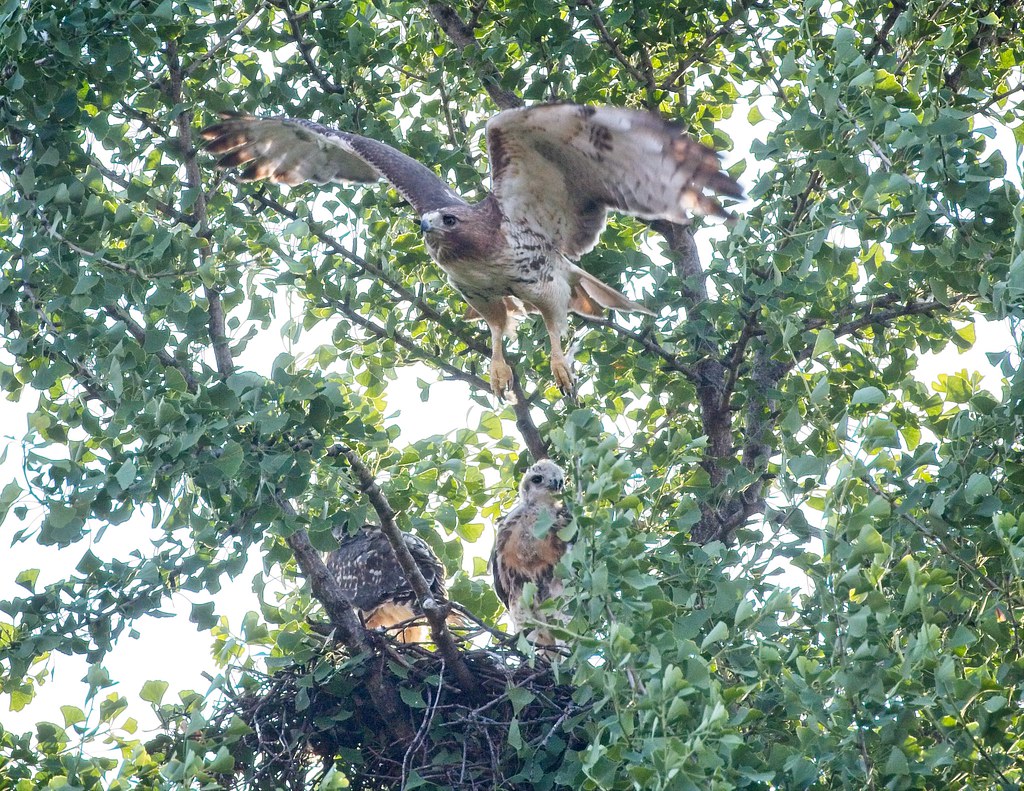 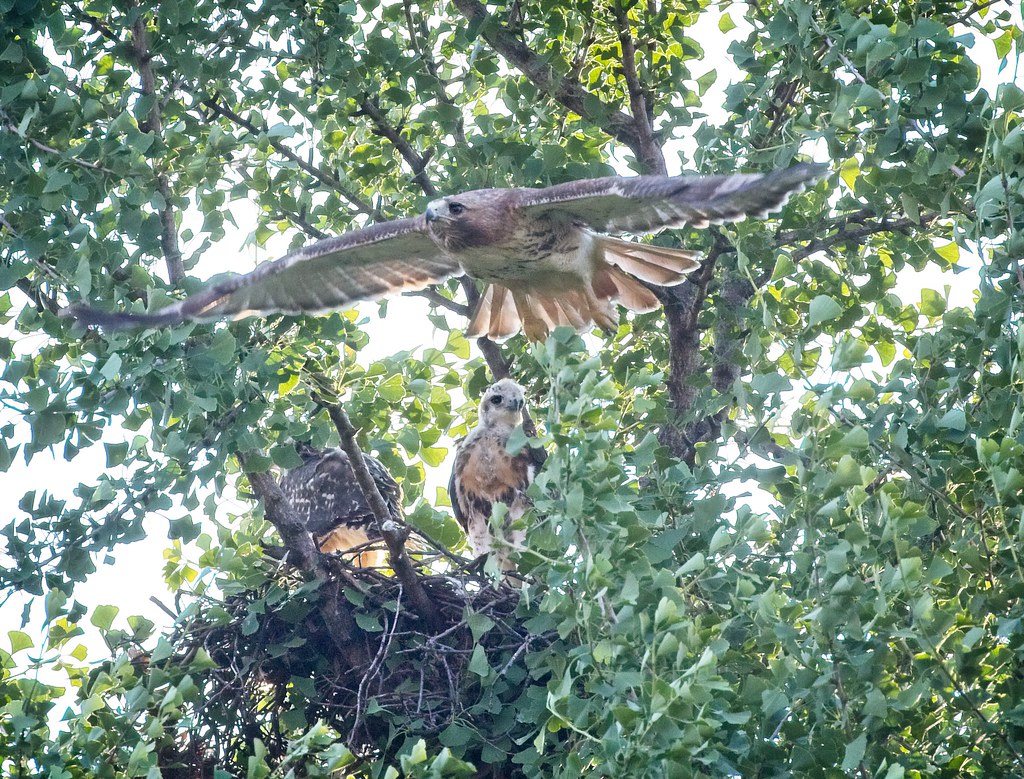 White fuzzy heads are now brown and the chicks are looking much more grown up. 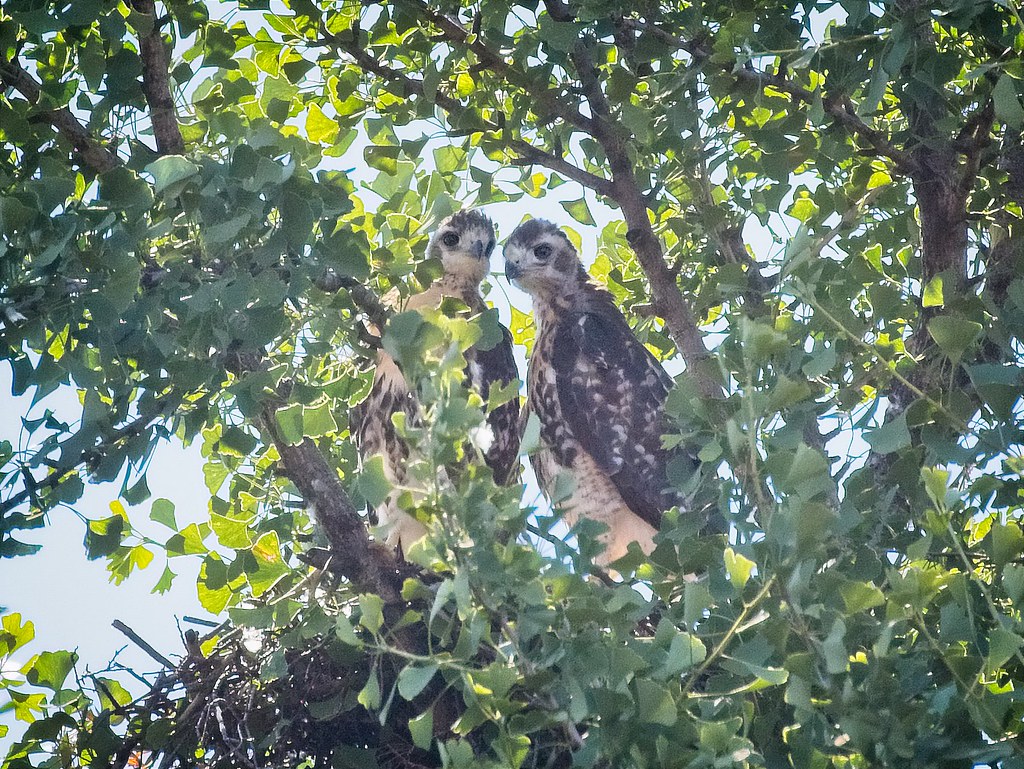 Meanwhile, dad Christo cooled off on the 4th of July by soaking his feet in a puddle in the playground just below the nest. 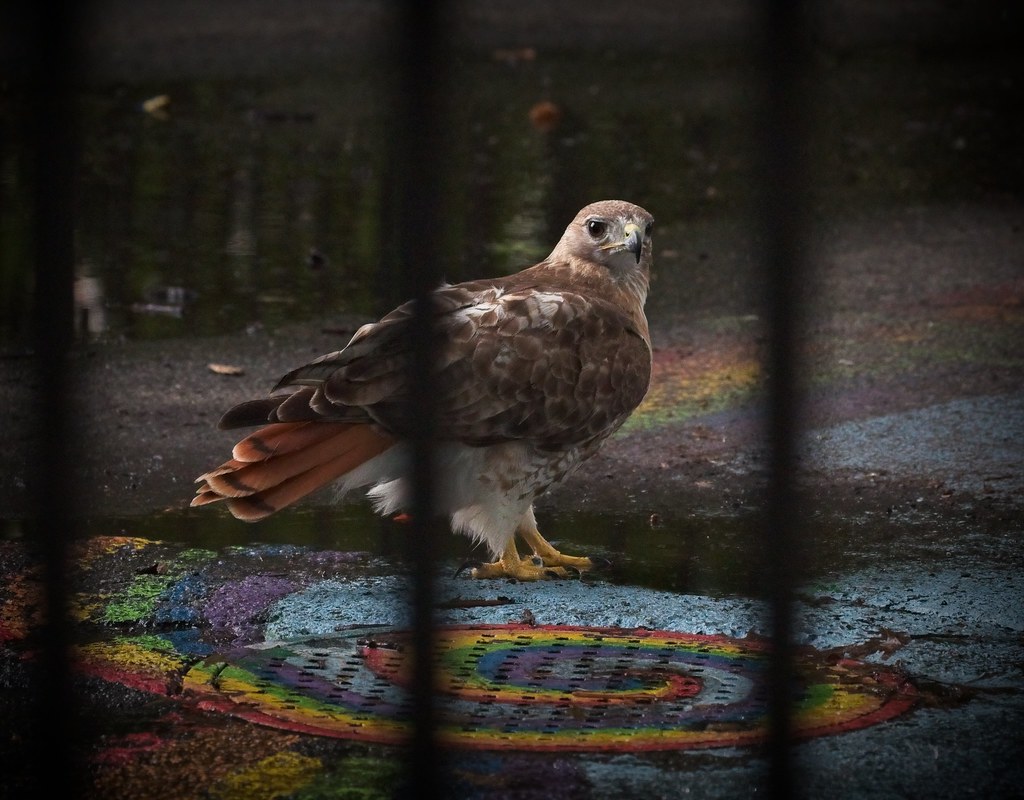 Afterwards, he rested a while on the playground equipment. 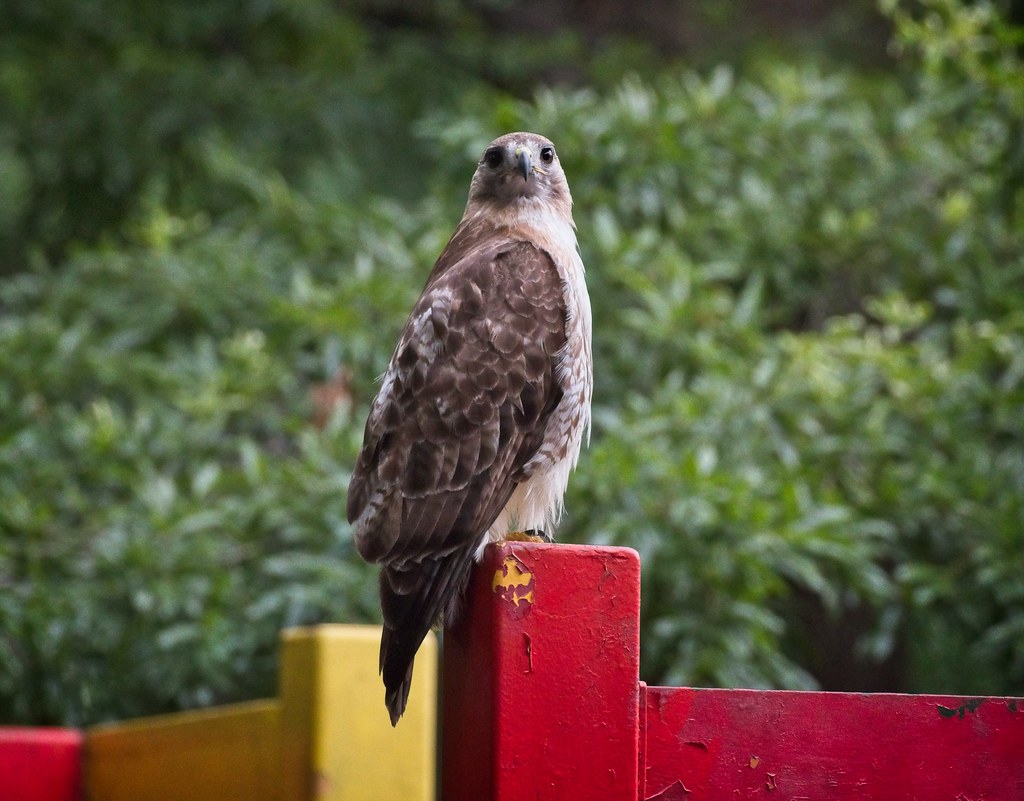 Amelia soaked in the last of the sun's rays atop the roof of St Brigid's church, just across the street from the nest. 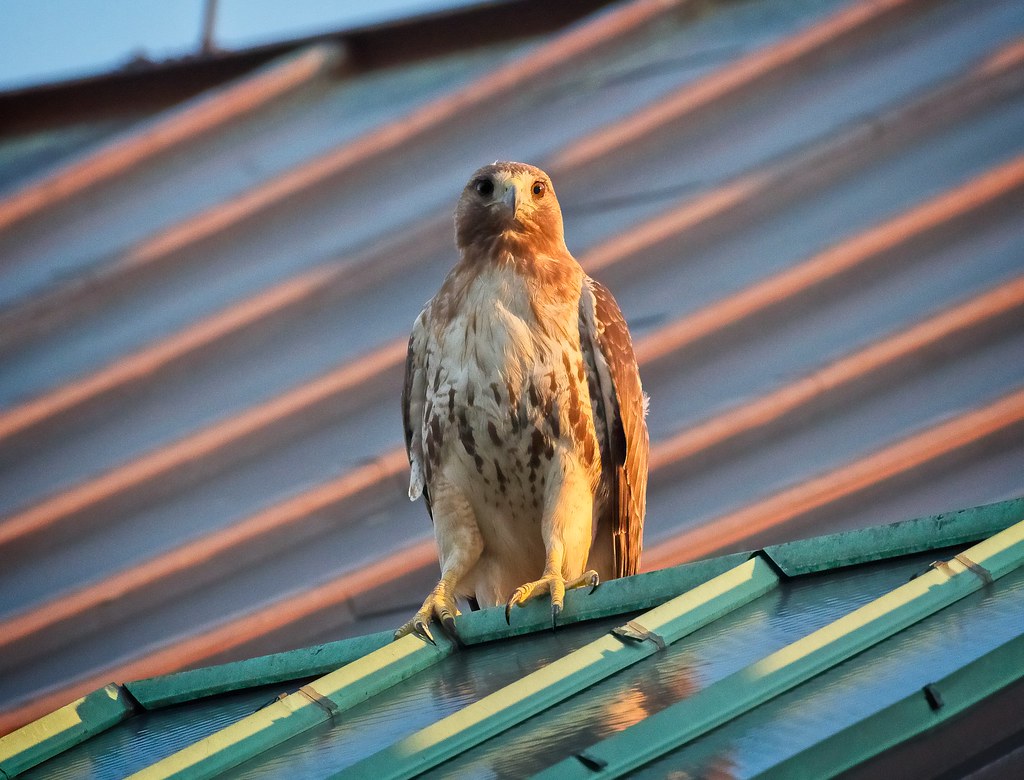 You can really see her light eye color in these photos (compare to Christo's dark eyes above). Her eyes will probably darken as she gets older, but for now, it's one way to tell the hawks apart. 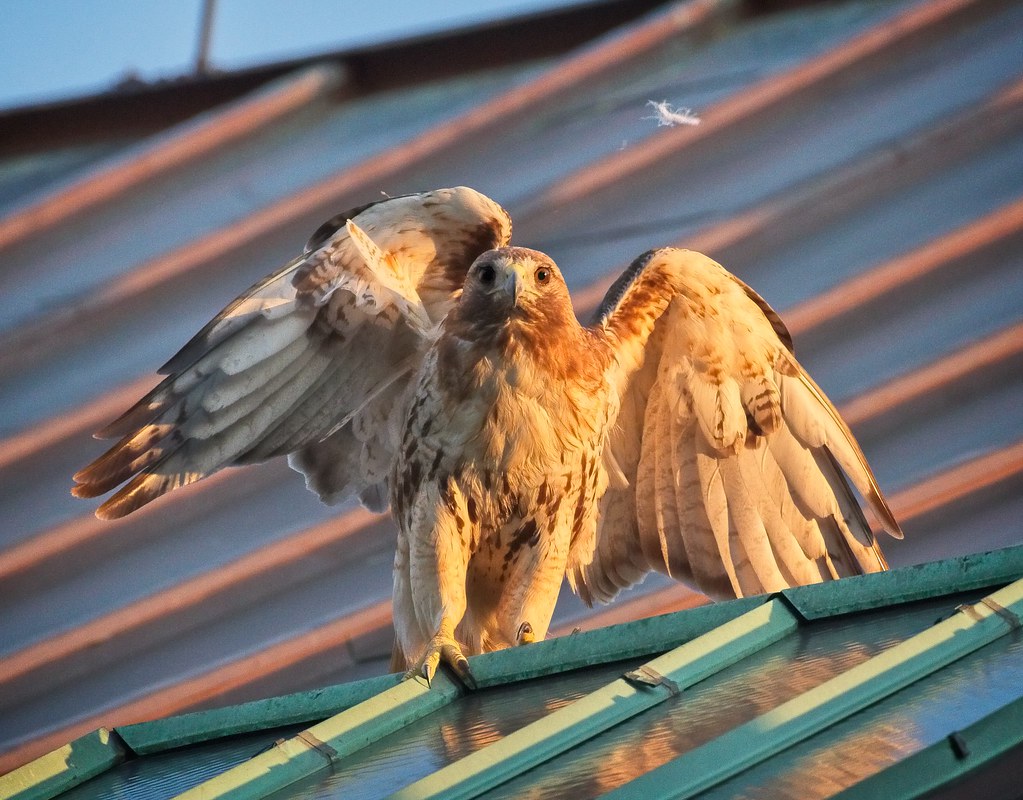 A short while later, Amelia perched up on the cross only to be mobbed by a mockingbird.  But there was something not quite right about this mockingbird... 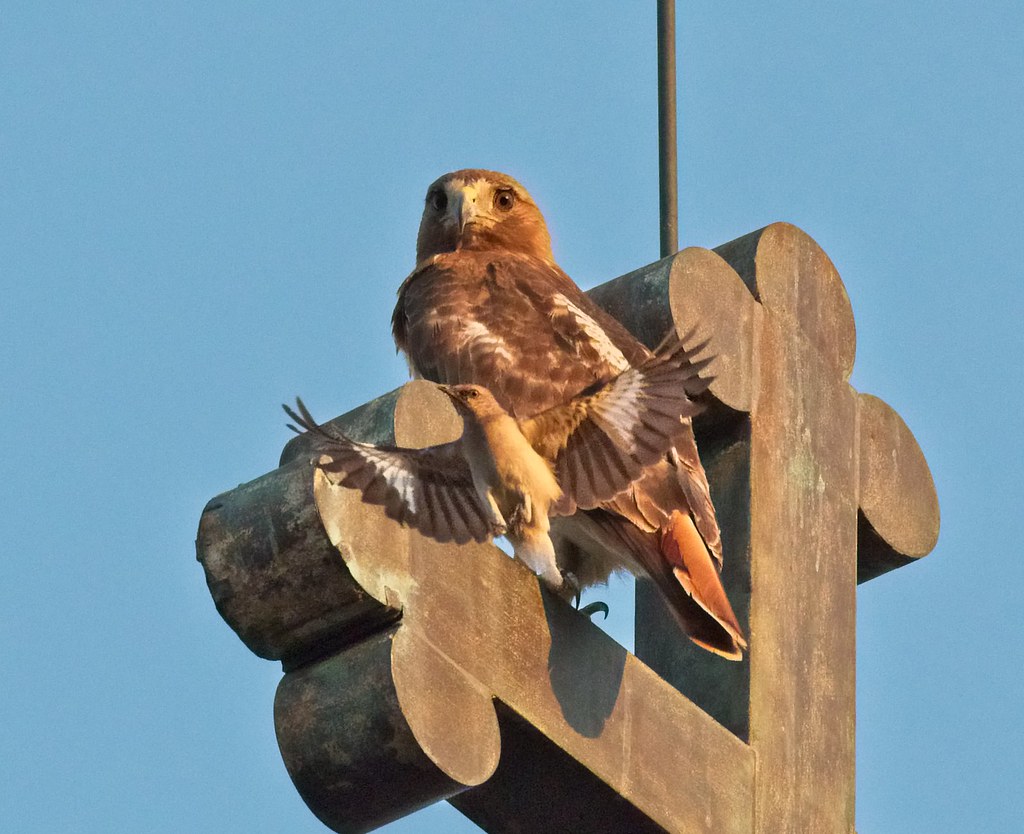 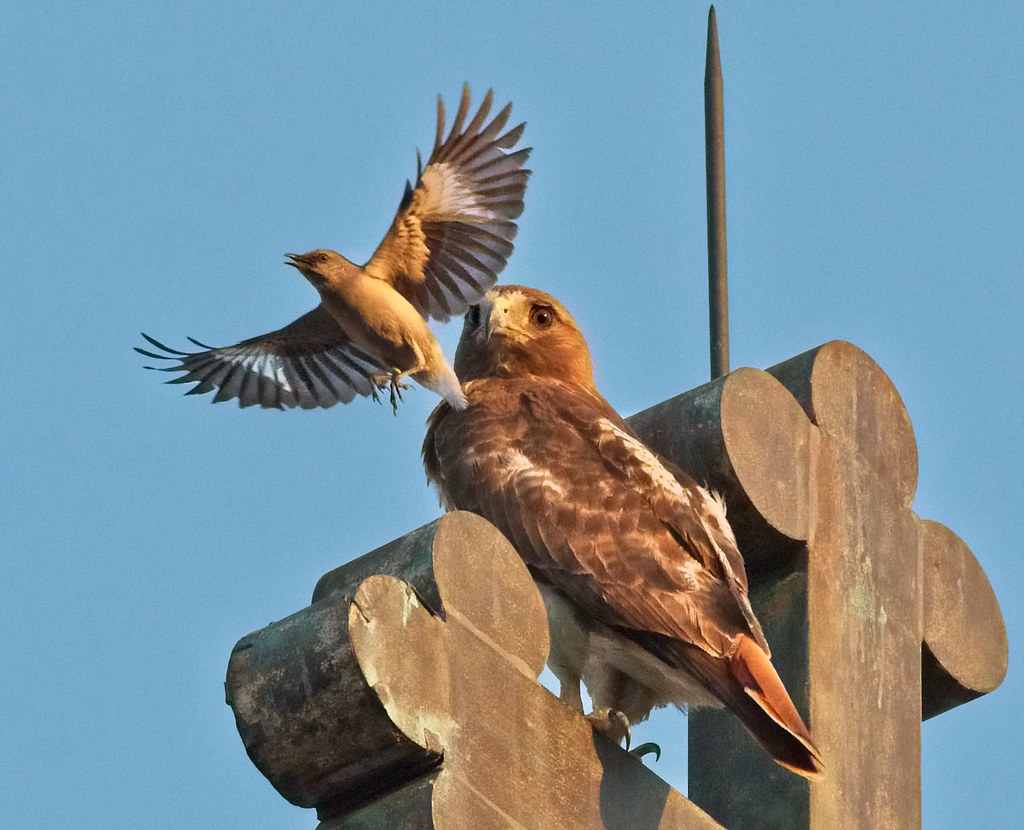 I've never seen a mockingbird without a tail before and I'm guessing it had an encounter with a predator, perhaps a cat. Despite being tailless, the mockingbird had no problem flying around and annoying Amelia.  This mockingbird should be easy to identify until it grows a new tail, so I'm hoping to see it again.