Drama as Tompkins hawk fledgling tangles with a fence

Being a hawk kid in the city isn't easy, even if you have the super-duo, Christo and Dora, as parents.  The native fledgling (I call her 'Ten' as she's the tenth offspring for Christo and Dora) has had a bit of a rough ride recently.

I haven't said anything on this blog as I don't want to cause any unnecessary panic, but Ten had been displaying odd behavior for a few weeks which may have been due to illness or injury.  No one knows, but she has been carefully observed by a lot of people and what ever was affecting her seems to have gone. 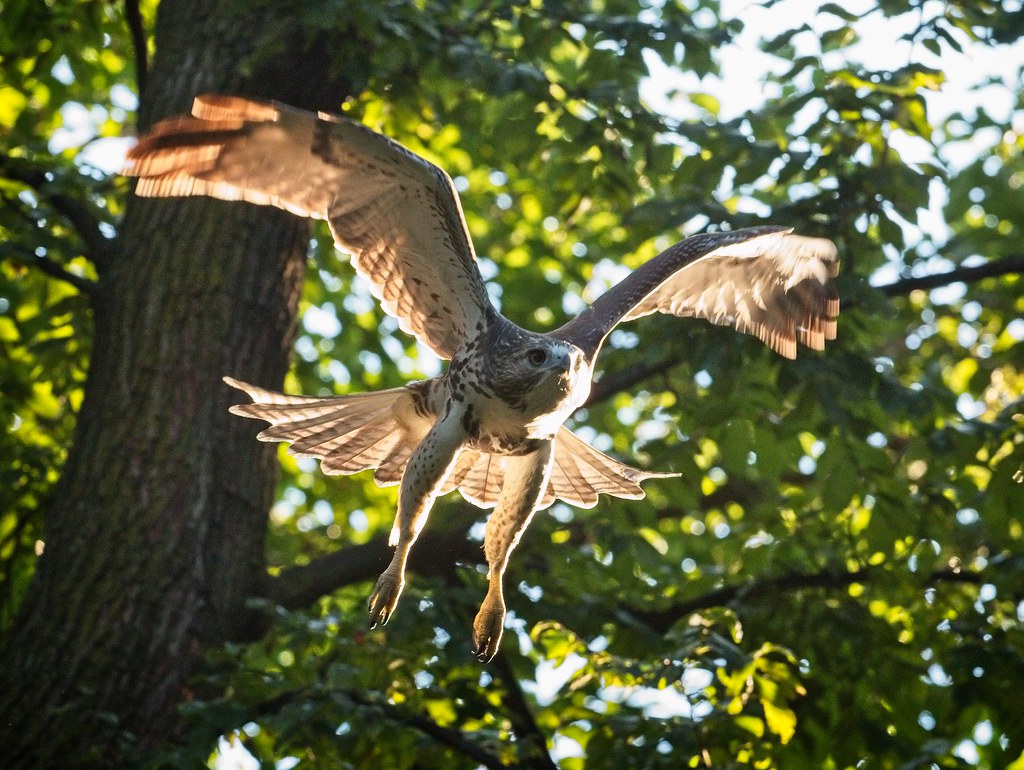 Back in mid-July, Ten was very active, swooping around the park and diving at prey.  She looked to be well on her way to gaining independence and I really thought she might be on her own by early August.  However, she suddenly seemed to slow down and spent a great deal of time sleeping in or very near the park. Young hawks do sleep a lot, but she seemed to be sleeping more than normal and was no longer interested in hunting.  She was eating and flying, though, so that was good. For the last week or so, she's regained her energy and looks to be back on track. 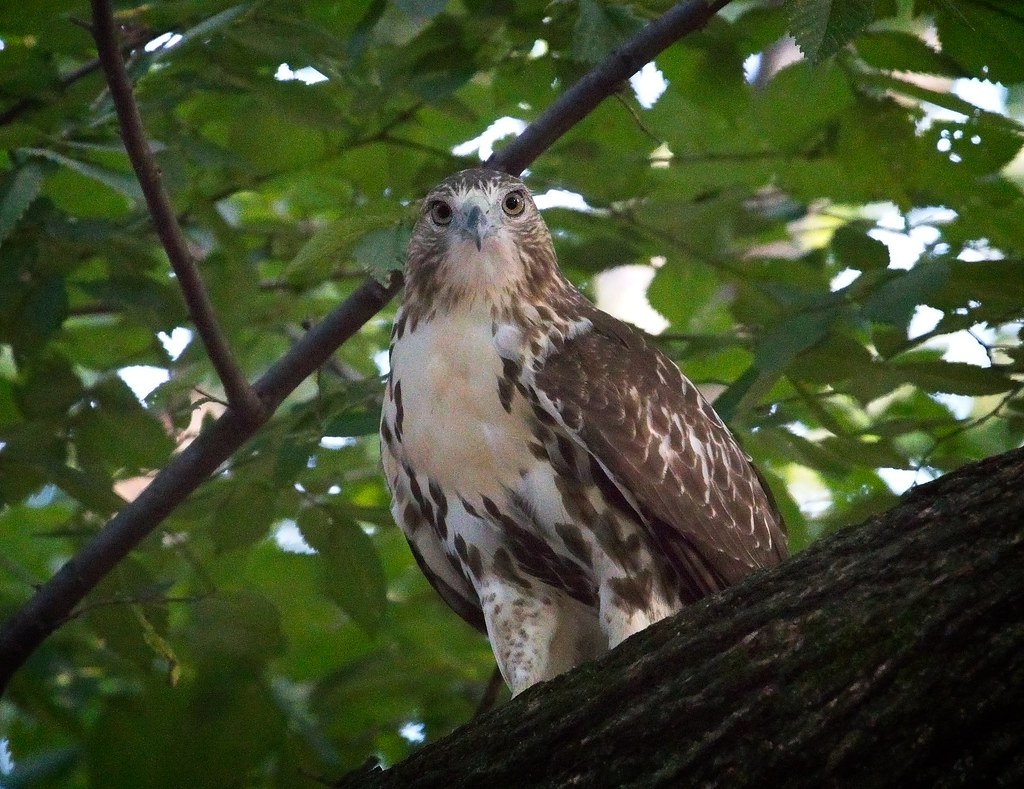 On Saturday afternoon, Ten came swooping through the park so fast, I couldn't keep up with her.  By the time I reached her near the St Mark's entrance, people were saying she had caught and killed a rat. Great news! The rat, however, had been dropped behind a bench and the hawk wasn't interested in retrieving it. Just as I was feeling disappointed that she might not know how to pick up her food, Ten suddenly dove into a flower bed near the nest tree by the Temperance Fountain. 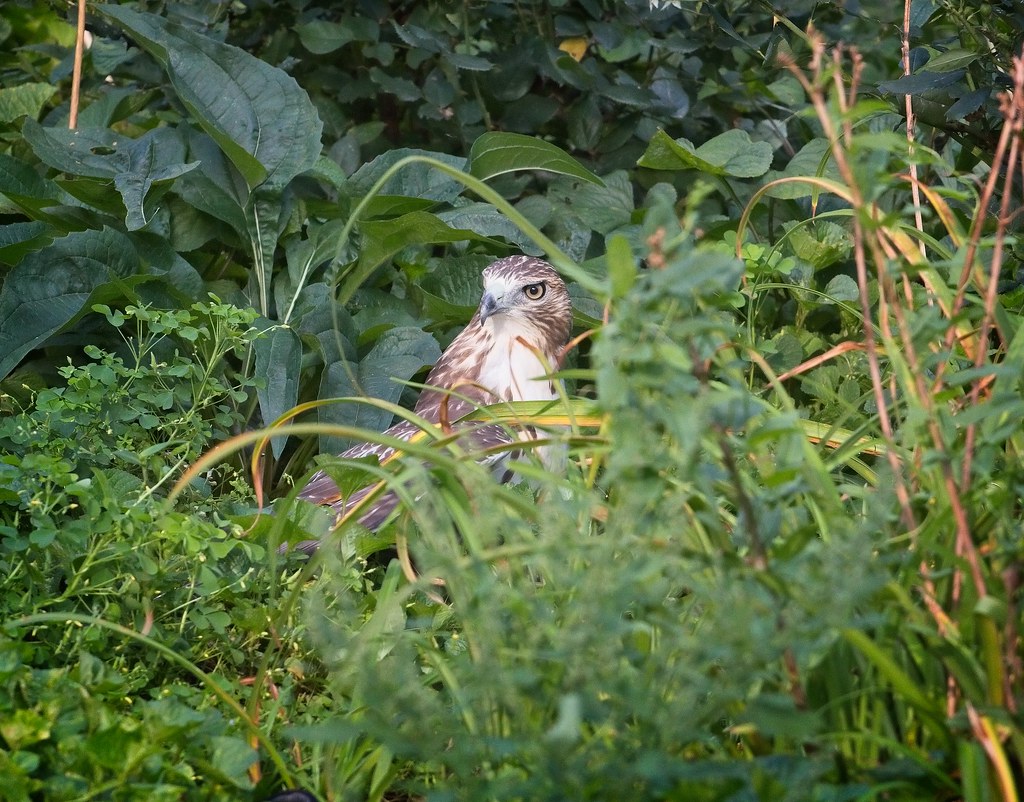 It's not visible in the photo above, but Ten is sinking her talons into a rat.  I expected her to fly up to a tree, but she surprised me by flying very low along the fence. 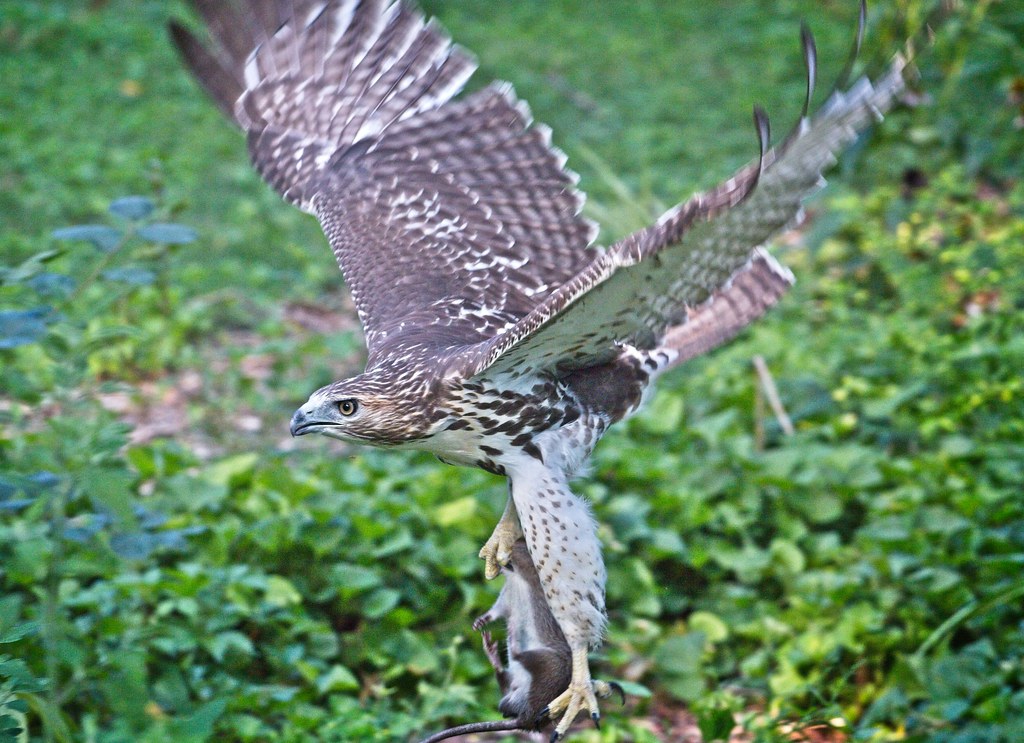 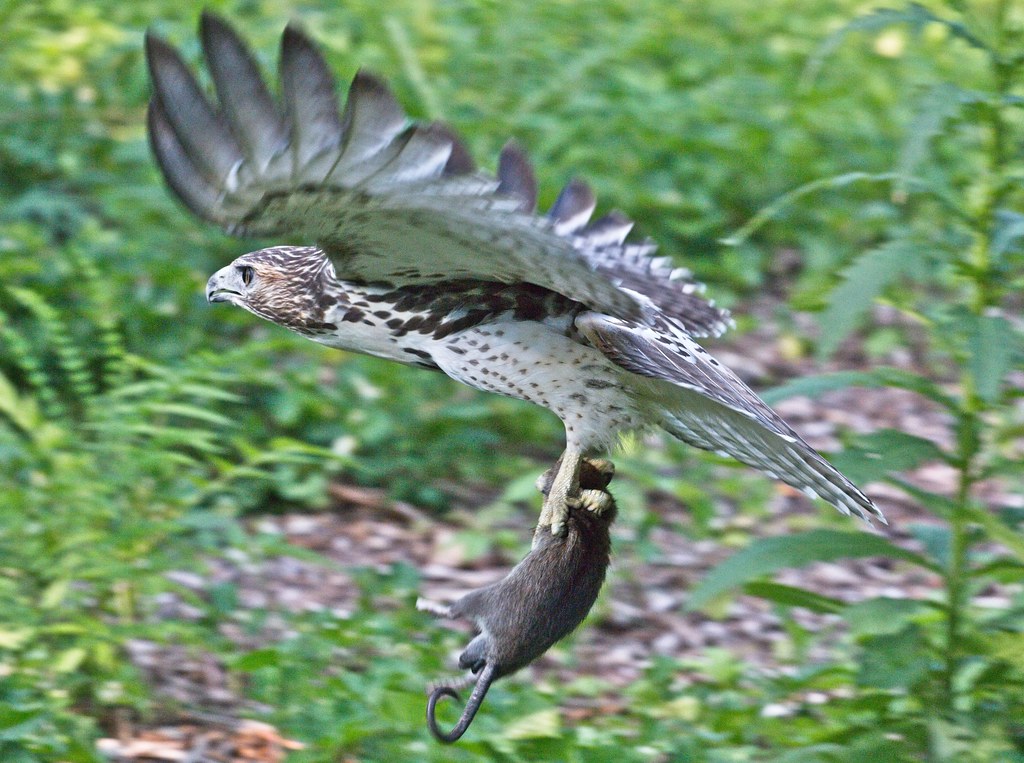 I think the rat may have been too heavy as she could barely clear the low fence with it. 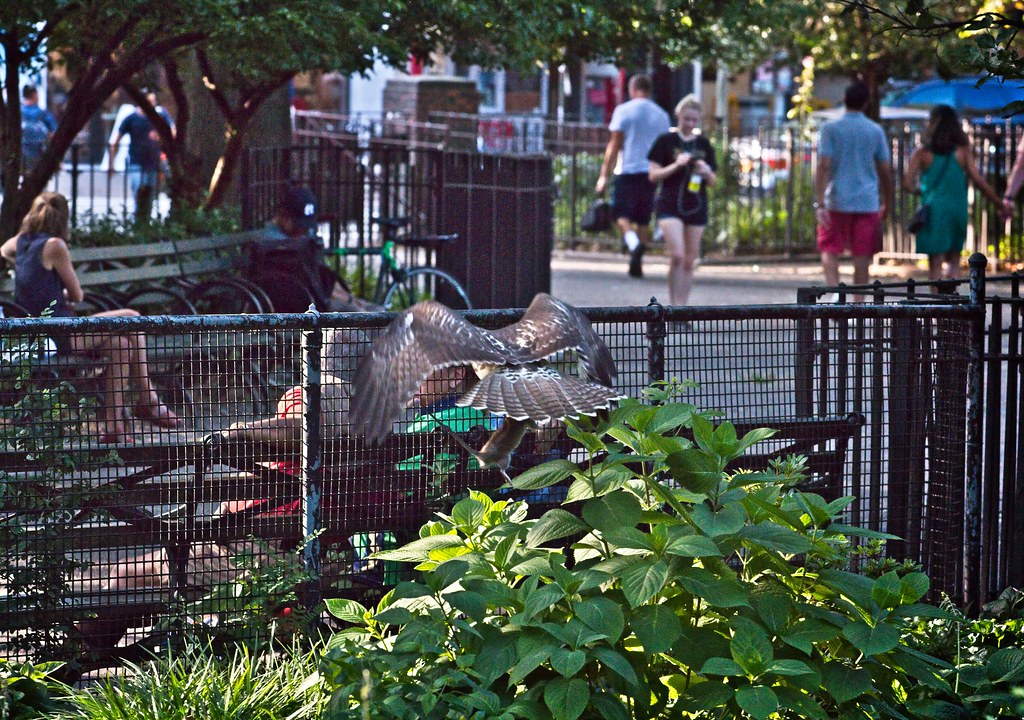 People sitting on the benches got a nice surprise when the rat came sailing by about six feet off the ground. 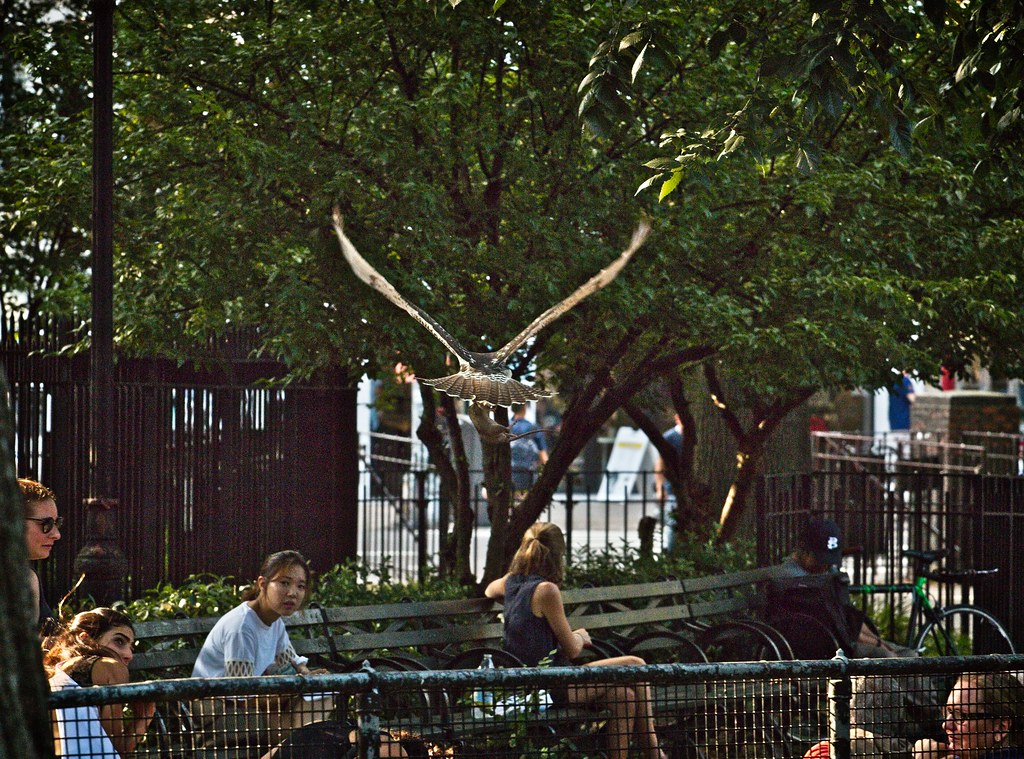 I was elated to see the hawk fly off with the rat and not drop it.  But, half a second later, my elation turned to horror as I saw this: 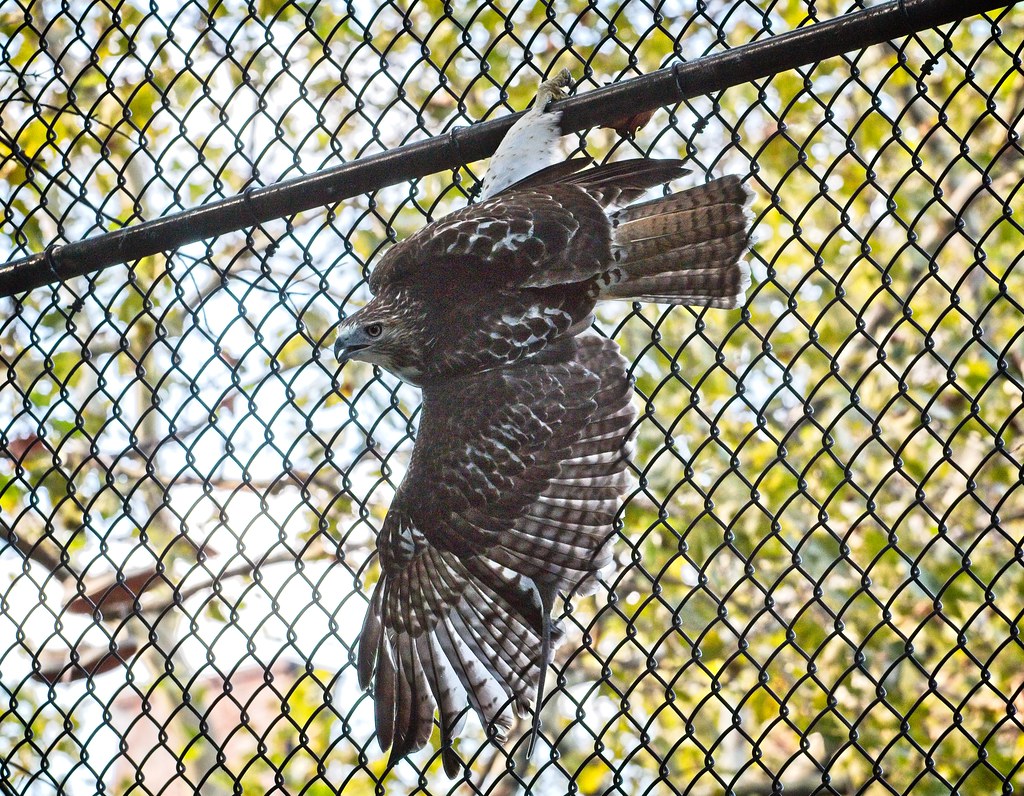 I think the rat was just too heavy and the hawk couldn't manage to get to the top of the tall fence along the skateboard/hockey area.  She made it about two thirds of the way up.

Below, you can see she is doing the splits, with her right talon hanging from the fence and the rat still clutched in her left talon. 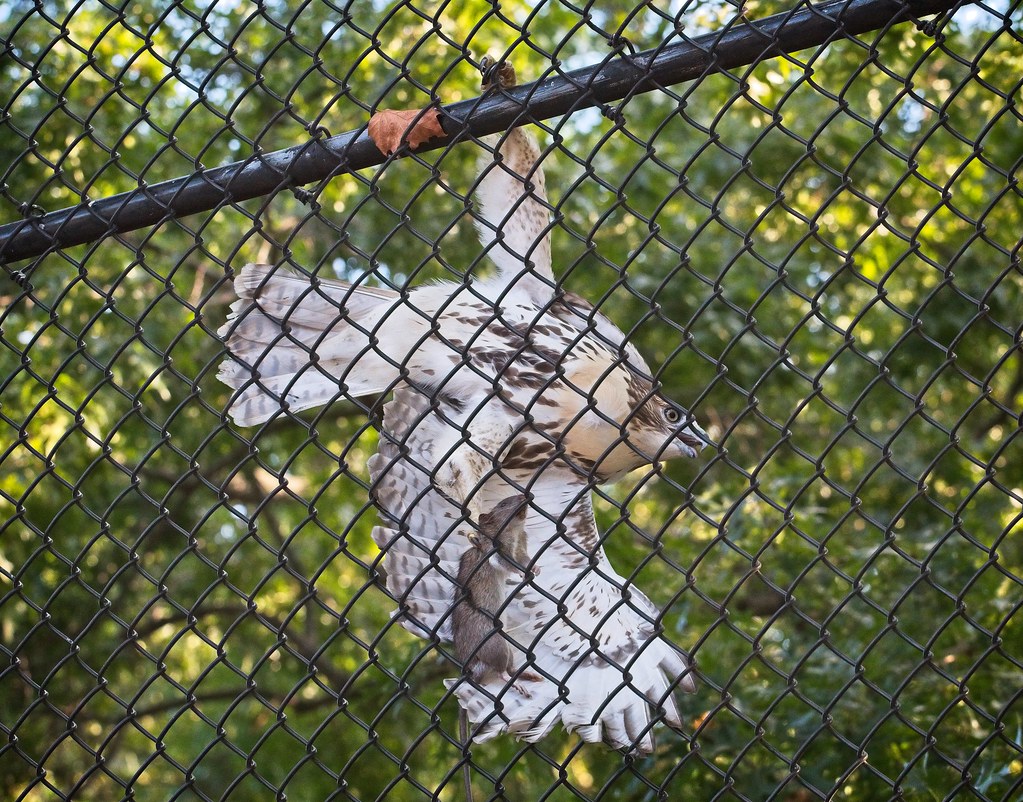 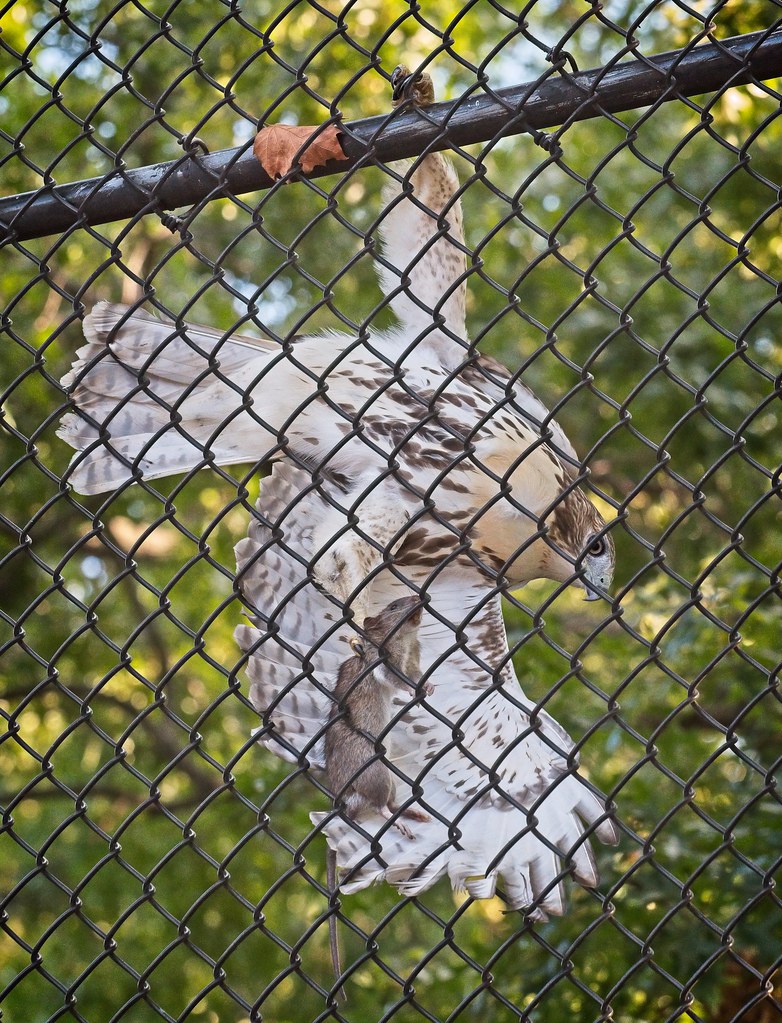 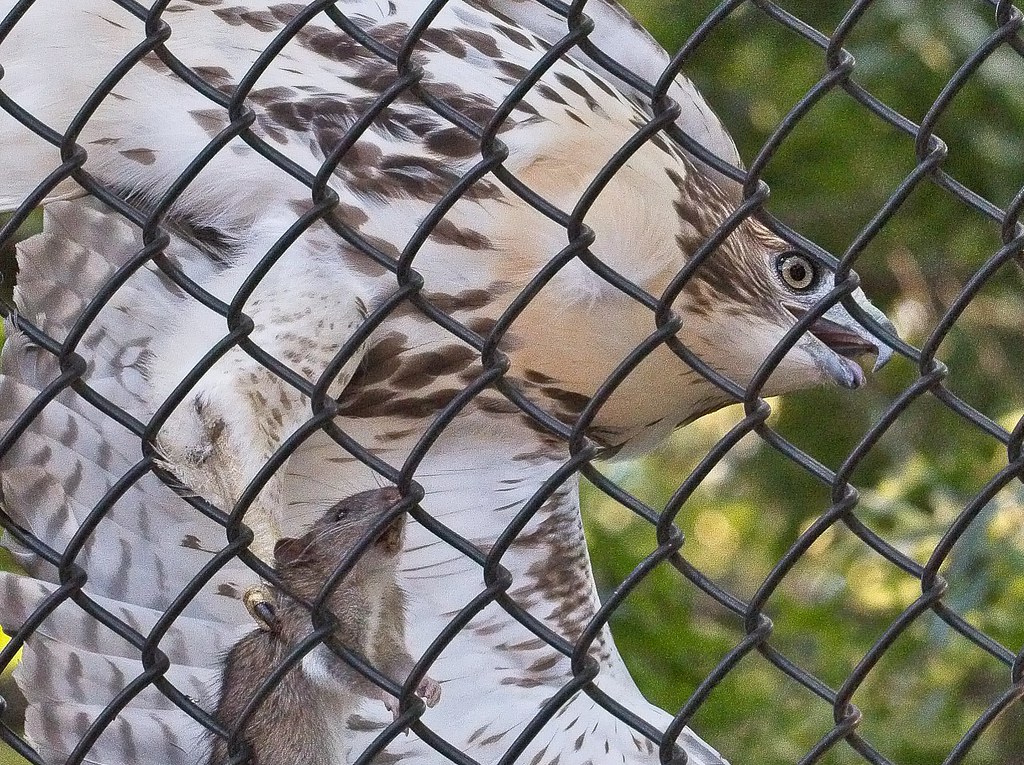 On closer inspection, I could see she was not actually stuck, but holding on to the fence with her talon.  Even so, what a predicament. 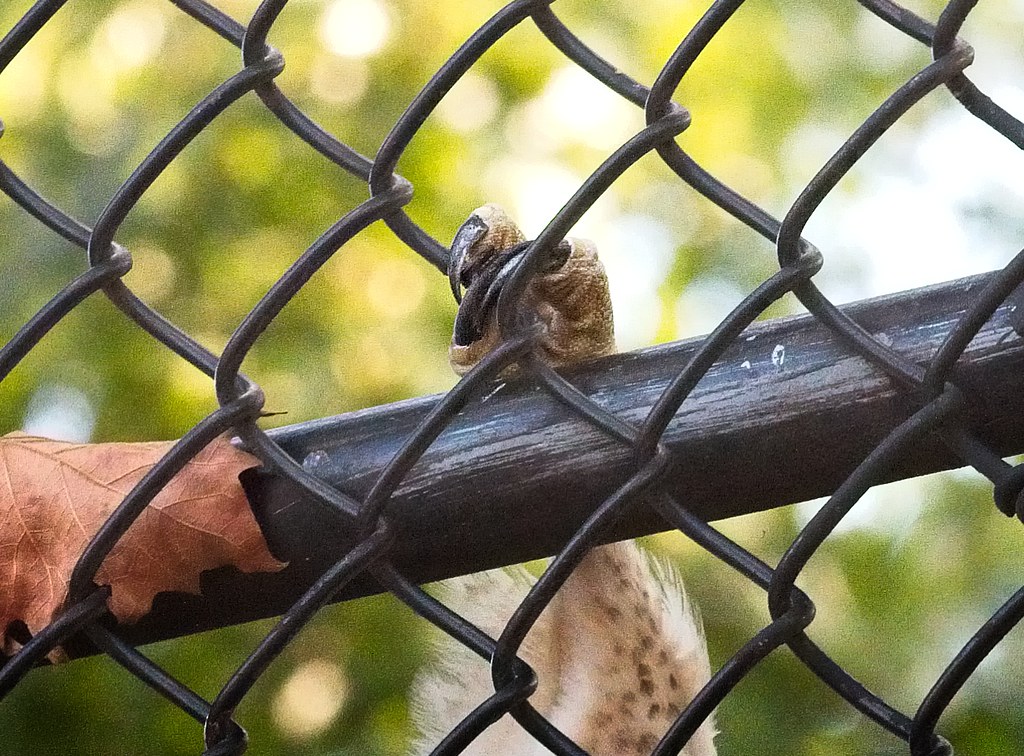 I took a video, but stopped as I thought I should call for help.  About three minutes after the video ends, the hawk freed herself and flew to a tree back by the Temperance Fountain.  By then, a pretty big crowd had gathered and everyone cheered.

Back at the tree, Ten cried loudly.  I'm not sure if she was announcing she'd successfully caught her own meal, or if she was screaming about what had just happened to her. 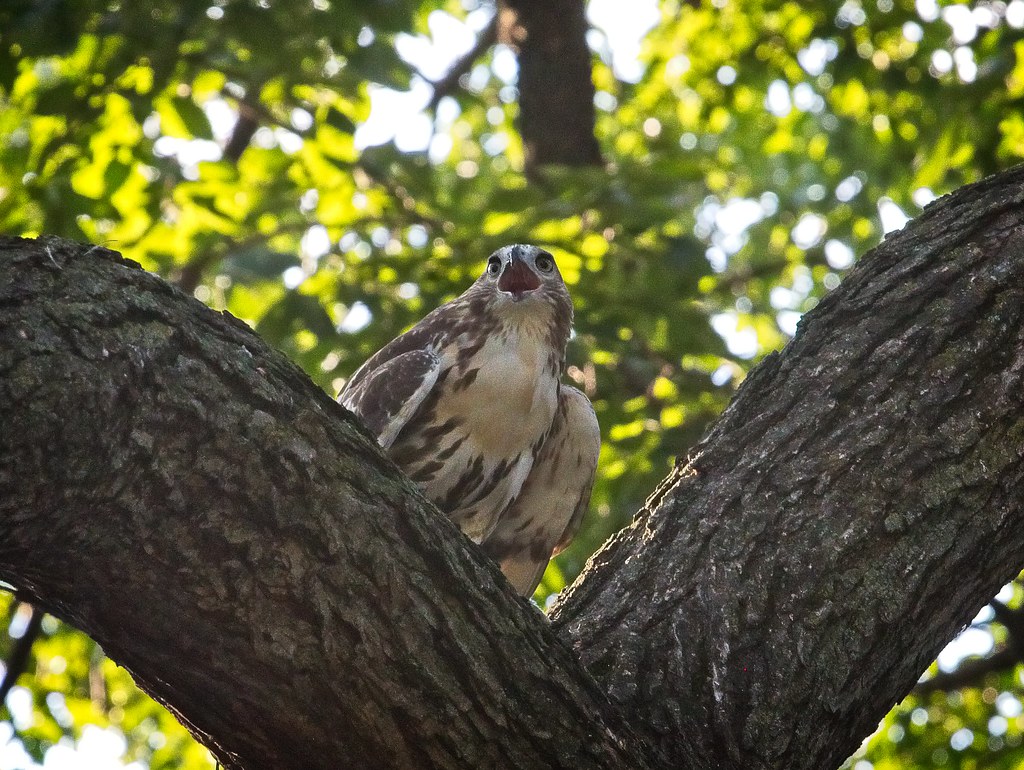 As the fledgling kept vocalizing loudly, Dora (not pictured) flew into the tree with what looked like a mouse.  She may have been responding to the cries and thought her kid needed food.  After a couple of minutes, Dora took off but left the food behind. 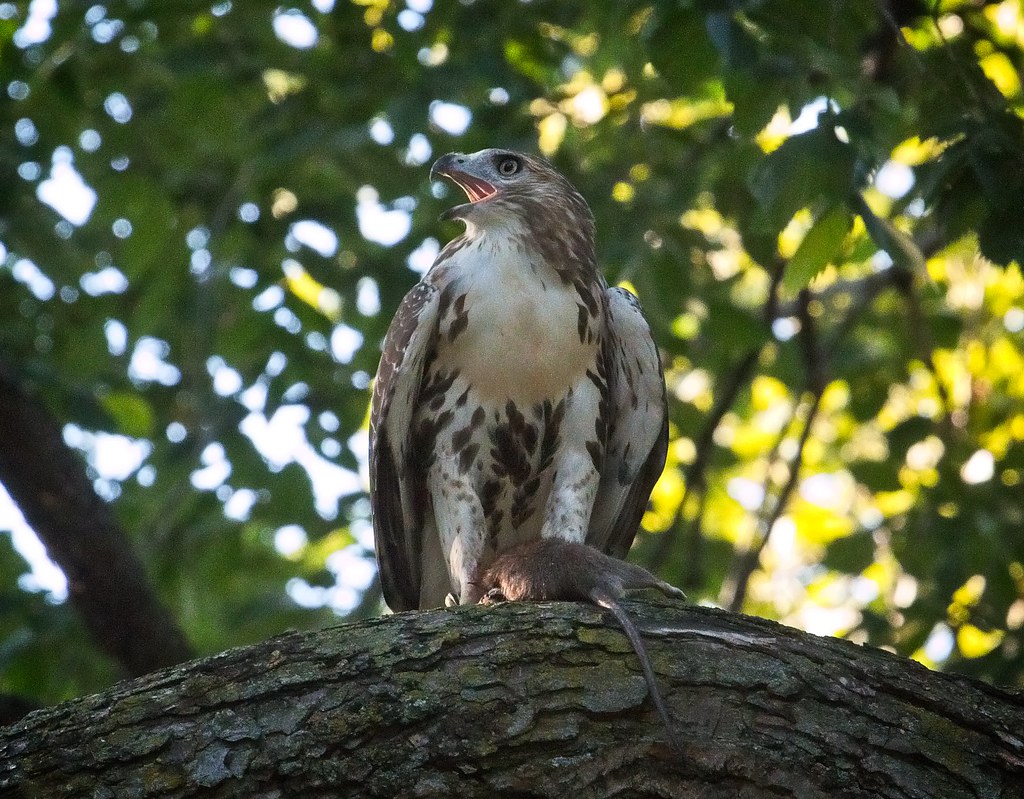 The incident with the fence left the fledgling with a scrape on the back of her right leg, but she seemed fine otherwise.  The following day, the scrape looked to be healing alright, so I think she'll be ok. 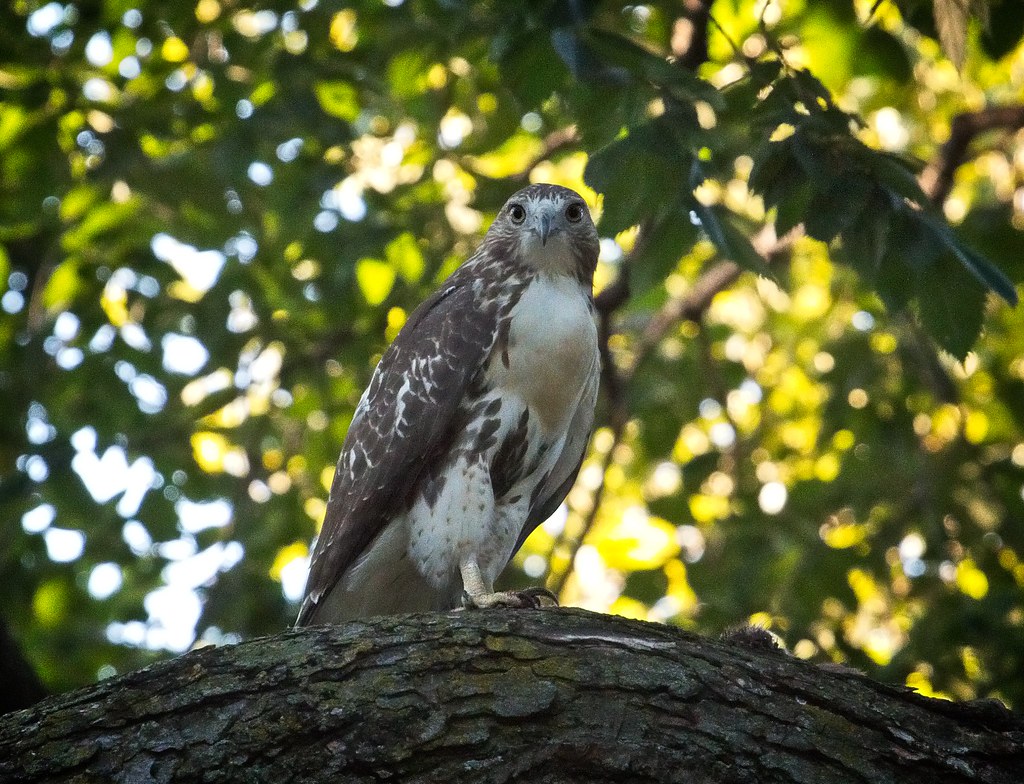 The fledglings always manage to do something to give hawk-watchers a collective heart attack!