I don't have much of an update this week on red-tails, Christo and Nora.  Christo is still working on the nest in the Ginkgo in Tompkins Square.  Nora has been seen in the nest, but I don't know if she's actually pitched in and helped build it.  Both hawks have been difficult to track this last week because of the dark and rainy weather, but also because they spend the majority of their time outside the park where I can't find them.

Last Thursday, Christo graced us with his presence just after sunset. 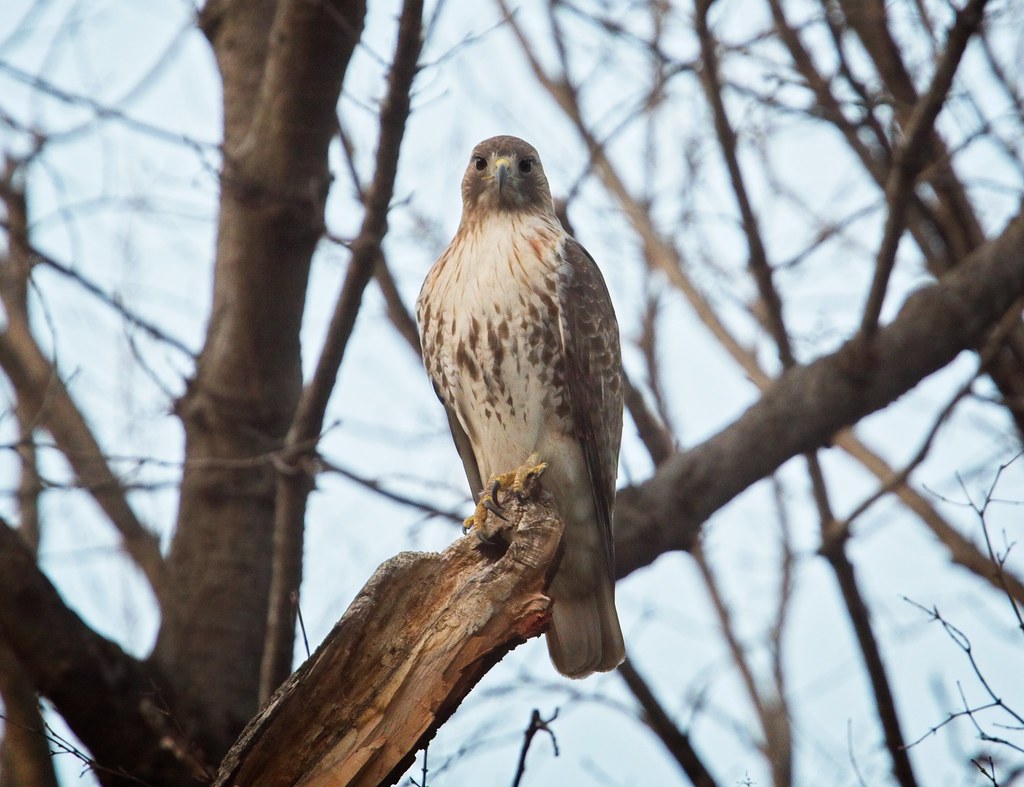 He caught a rat behind the park offices, then perched on the birdbath with it.  He seemed to dunk the rat in the water.  I'd like to think Christo was choosing to wash off his food before eating it, but the action was likely not deliberate. 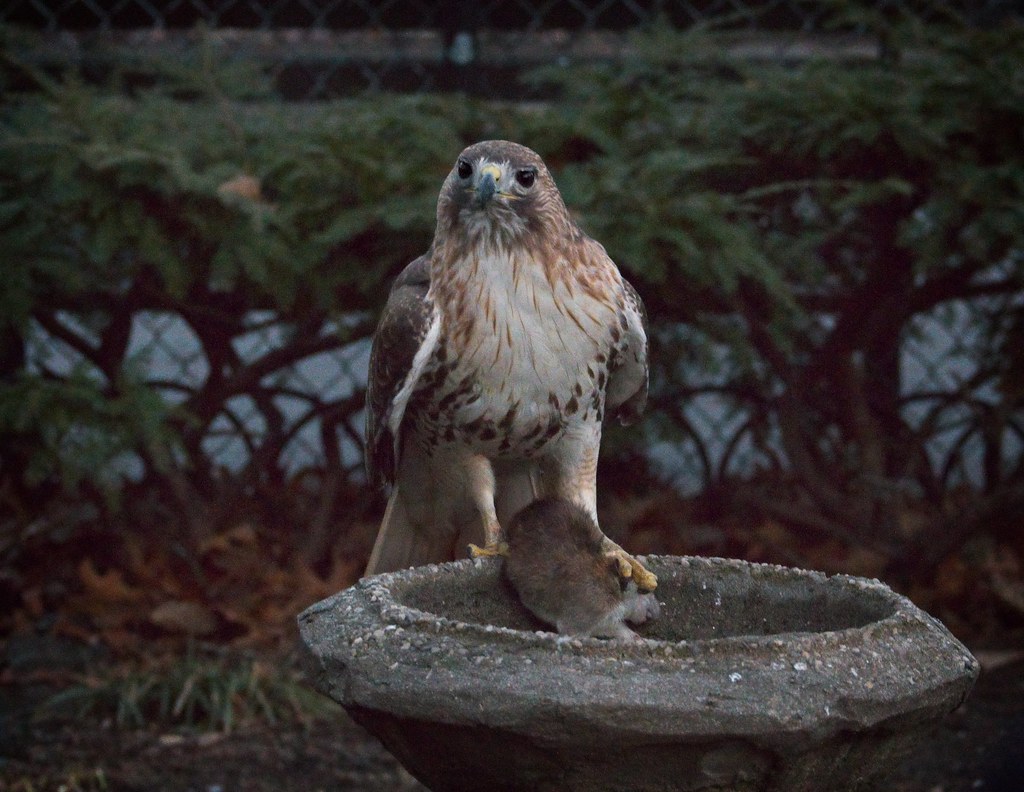 It was a particularly big rat, and it's more likely Christo was resting before carting the heavy catch up to a higher perch. 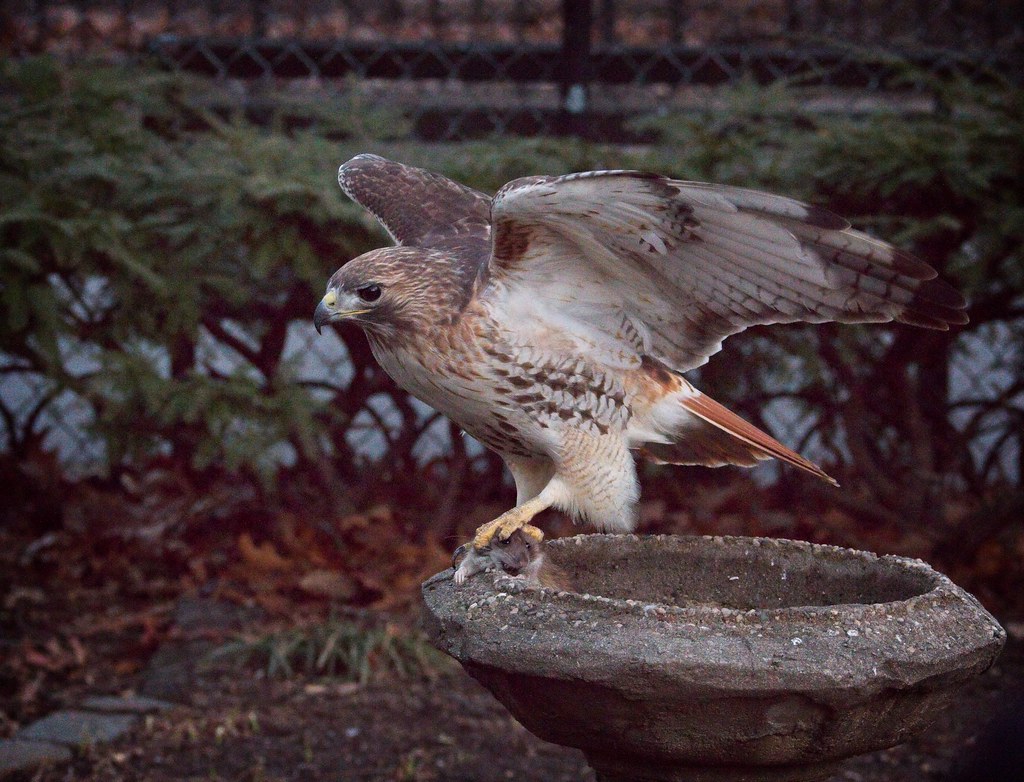 On Sunday, both hawks made an appearance during a brief break of sunshine.  Christo flew into the park from 7th Street at Avenue B with a mouse in his beak. 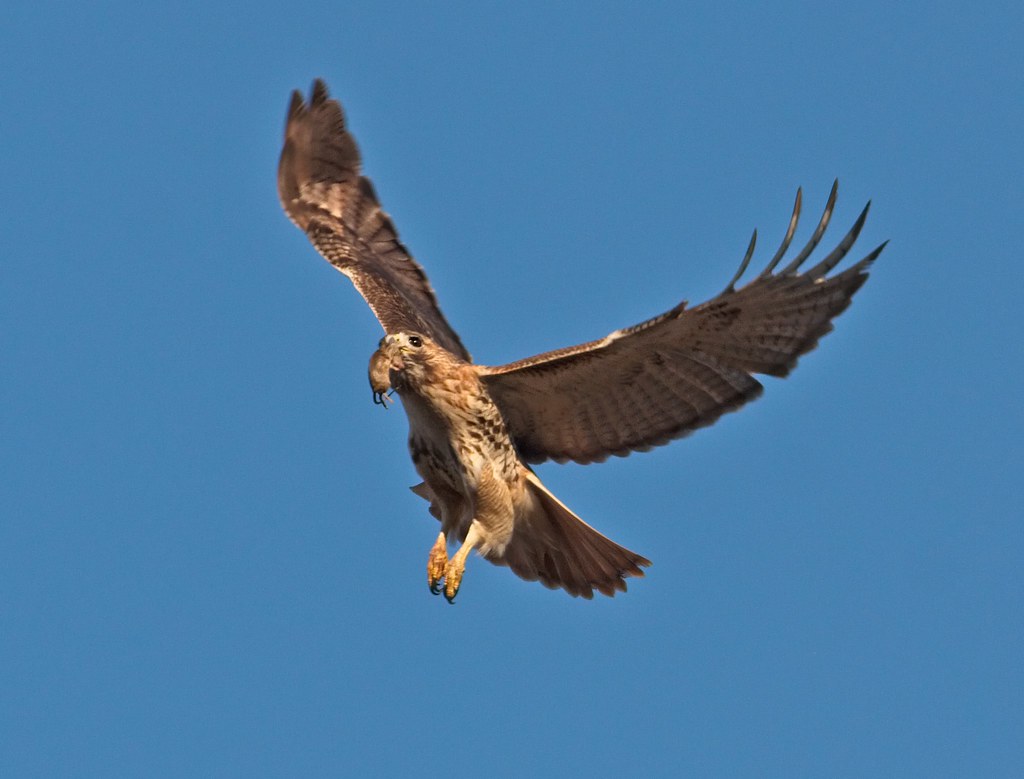 He circled the SE corner of the park, carrying the mouse and calling for Nora at the same time. 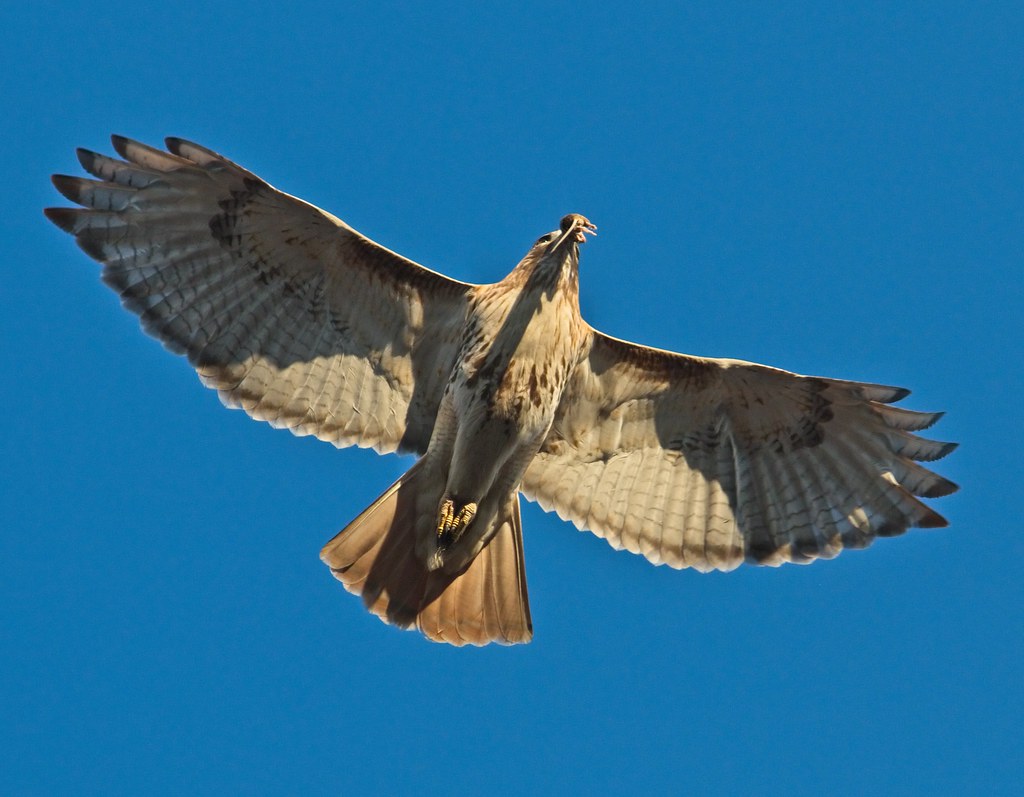 I must have missed the moment when he transferred the mouse from his beak to his talon in mid-air. 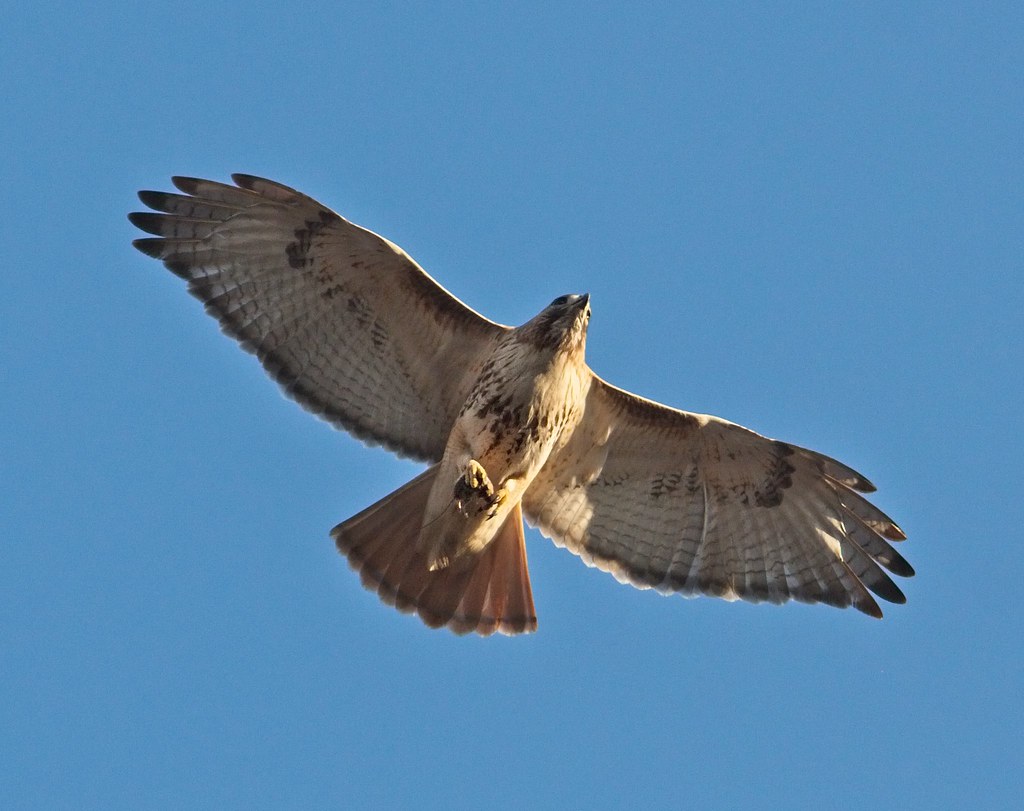 Getting no answer from Nora, Christo flew south over the buildings where I lost sight of him.  A few minutes later, Nora appeared on the east side of the park and circled over the nest before disappearing over St Brigid's church. 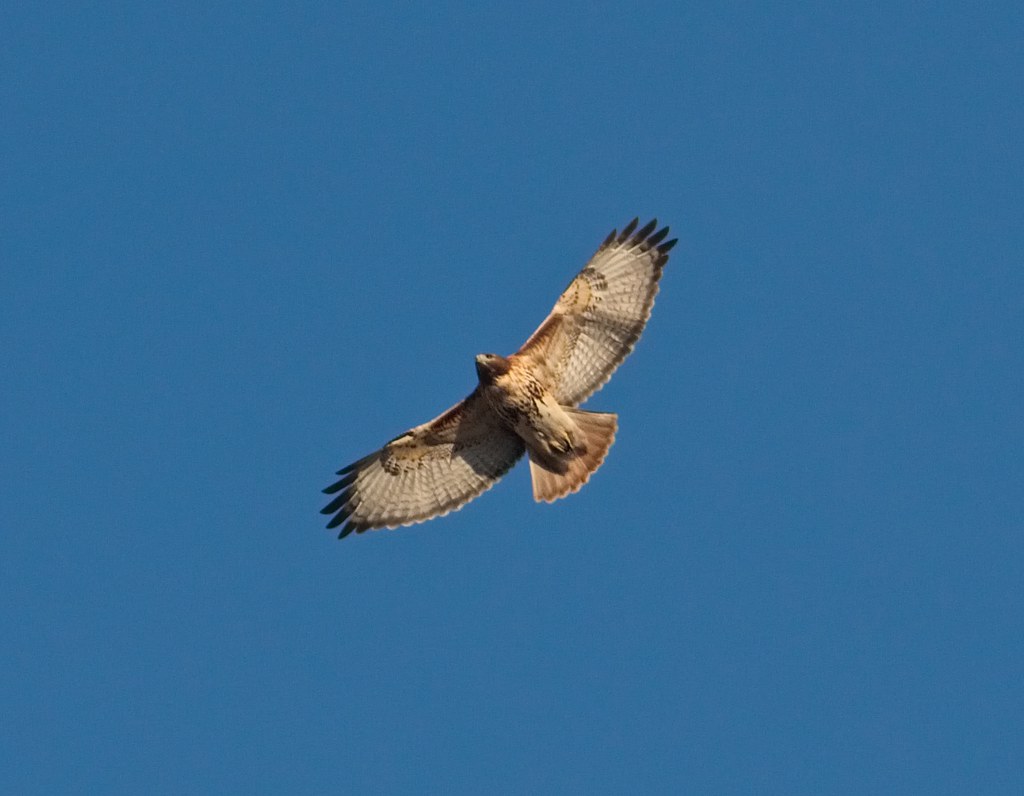 On Monday, both hawks showed up around 5pm when it was dark and rainy.  The photos below are the best I could do in bad conditions.

Christo showed up first, and went hunting for dinner behind the park offices.  Nora appeared atop the Christodora, at which time Christo made a beeline for the nest. After a few minutes, he caught a rat in the SE corner of the park and took it back to the nest.  Nora then dove down from the Christodora and perched on the Newsboy building across Avenue B from the nest. 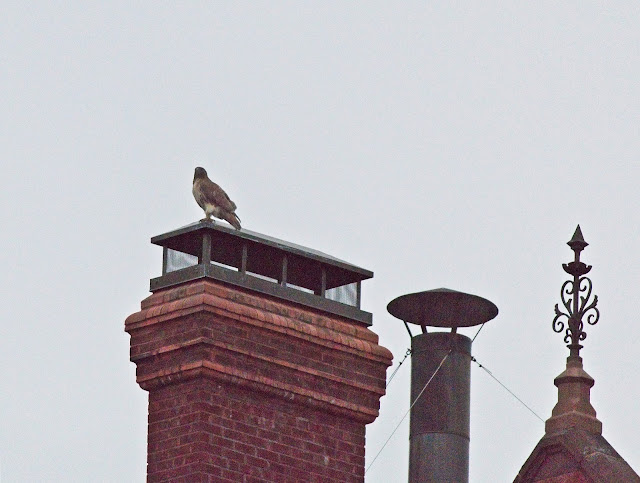 Christo flew the rat to the big tree on the central lawn and called for Nora to come get it.  She flew to a neighboring tree, about thirty feet away.  Christo kept trying to convince her to come get the rat, but she didn't seem all that interested.  After a few minutes, he began eating it himself.

Finally, after a lot of coaxing, Nora flew over to Christo and stood on top of the rat.  Christo flew off. 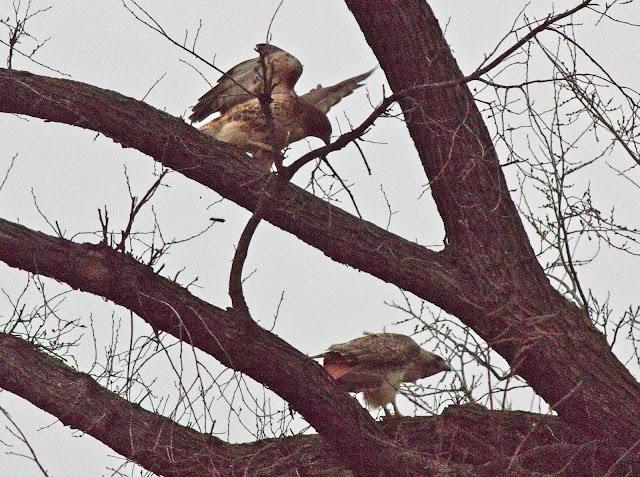 Nora then flew east with the rat in tow. 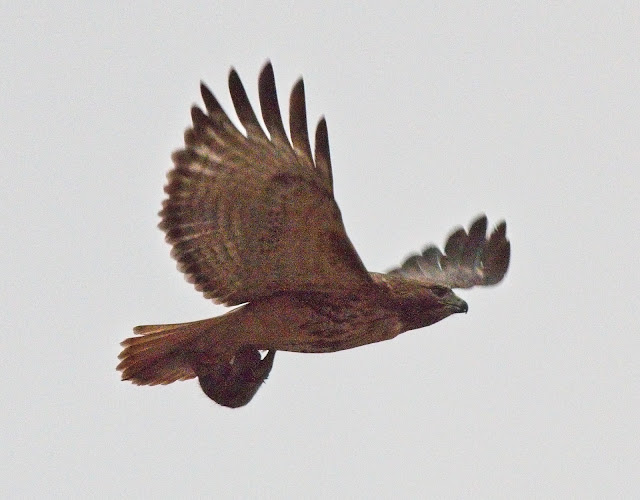 Side note:  Blue jays have been hiding in the Holiday Tree in the park and I was wondering if they could be roosting in there at night.  When Nora flew past the tree, three blue jays shot out of the tree, answering my question.

Nora carried the rat to a fire escape on 8th Street, east of Avenue B.  She ate for about ten minutes, but decided to abandon the rat and flew down the street towards Avenue C.  By that time, it was really dark and raining and I wasn't up to finding out where she went. 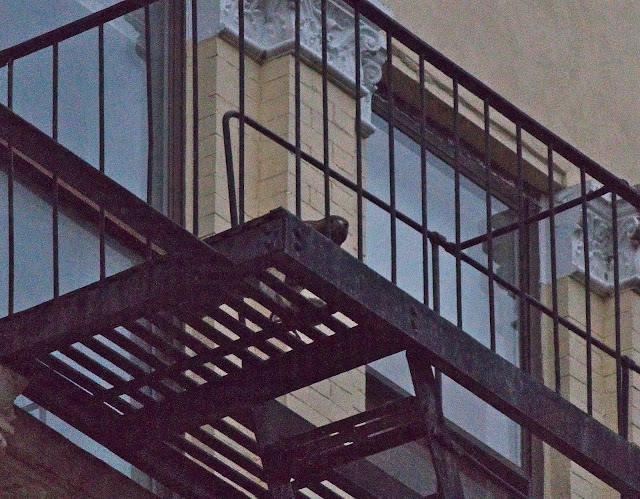 If you look out your window and see a mangled rat on the fire escape, this is probably how it got there.