It's been a month since the youngest Tompkins Square Park red-tailed hawk fledged the nest, and he's come a long way in such a short time.  I've now seen him catch every type of available prey except squirrels, although he did succeed in pinning one to a tree.  Soon!

He's growing into a beautiful and colorful bird. 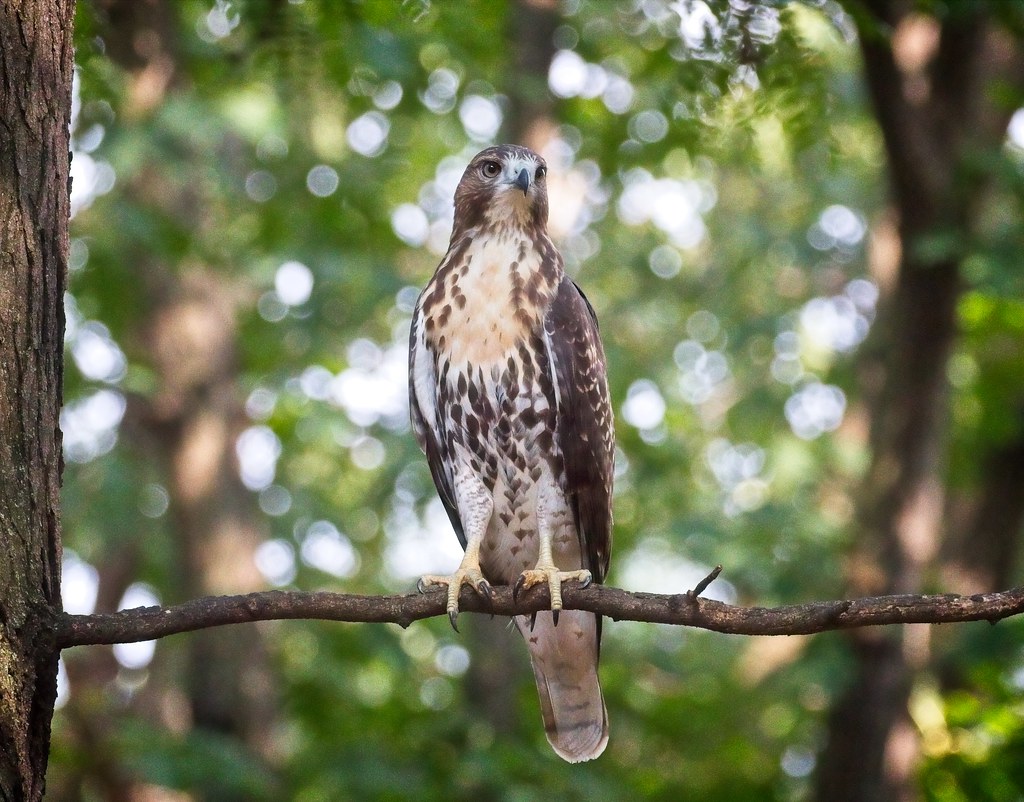 This fledgling has impressed me so much with his hunting skills.  I've yet to see him soar, but he's learned to master the trees and fences in the park, using them as perches from which to dive on prey. 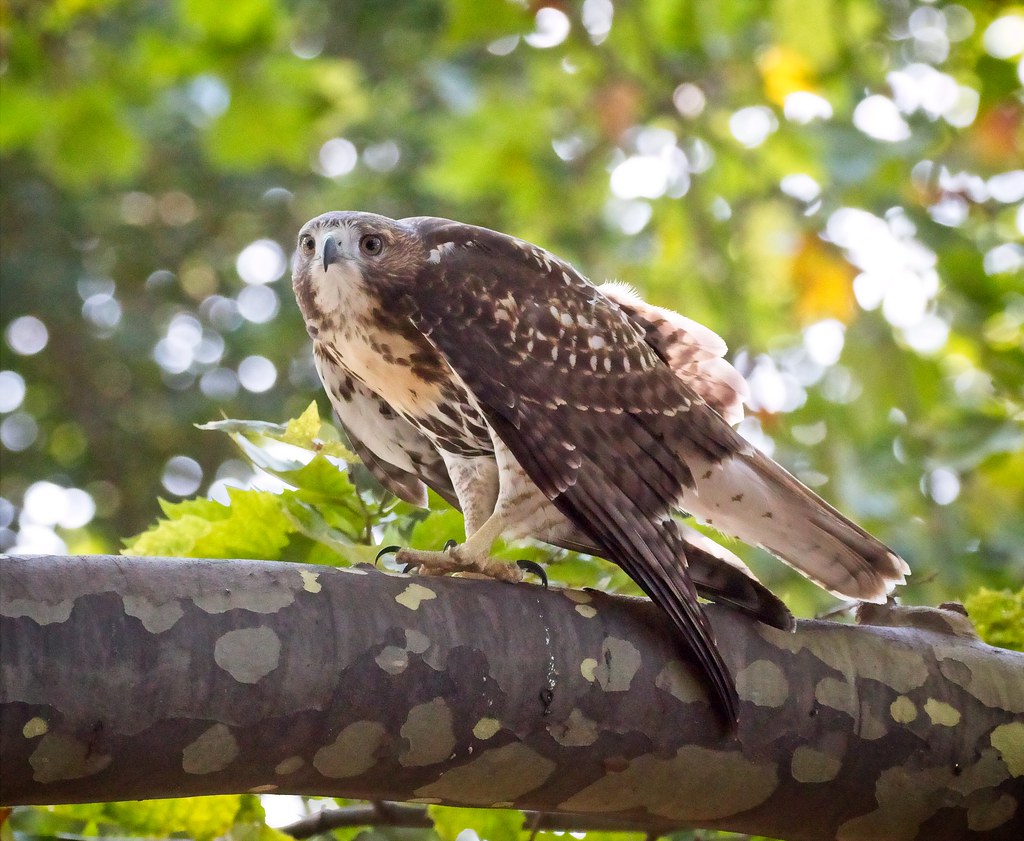 He also uses trees as shields so he can sneak up on unsuspecting prey.  He caught the pigeon below by flying up to it while hiding behind a tree, then pouncing at the last second. This tells me he's using planning and strategy. Dad Christo is teaching him well. 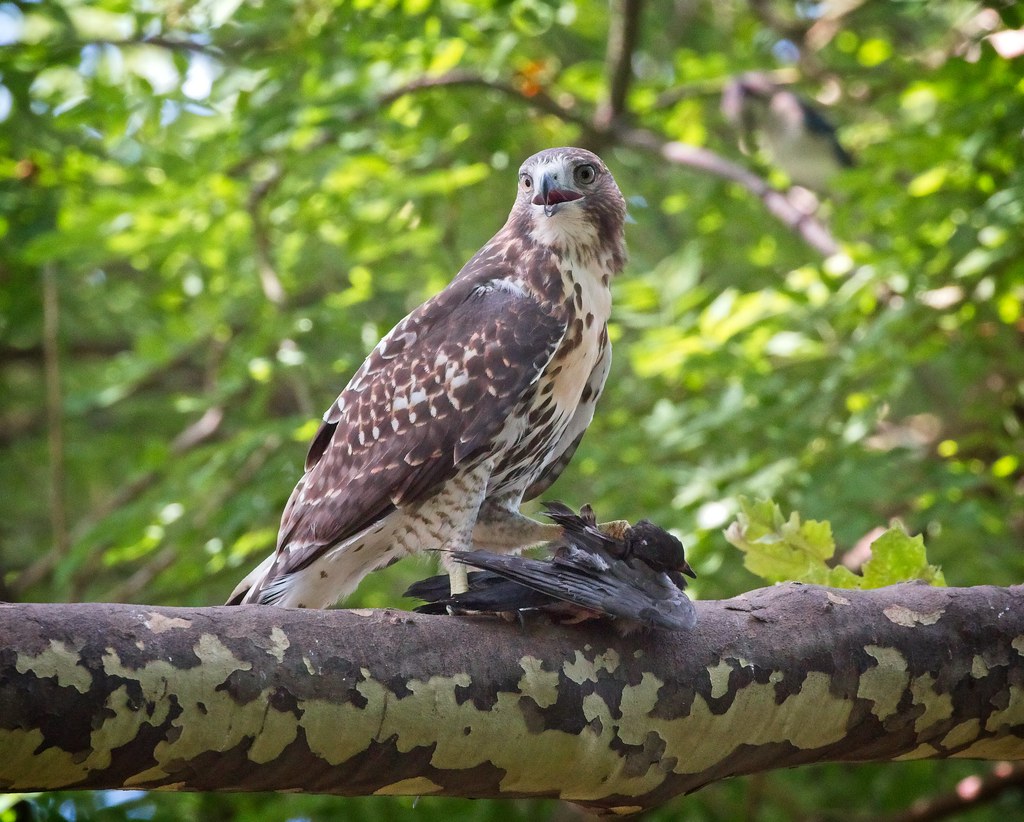 The fledgling is extremely curious, investigating every little creature, including this bee. 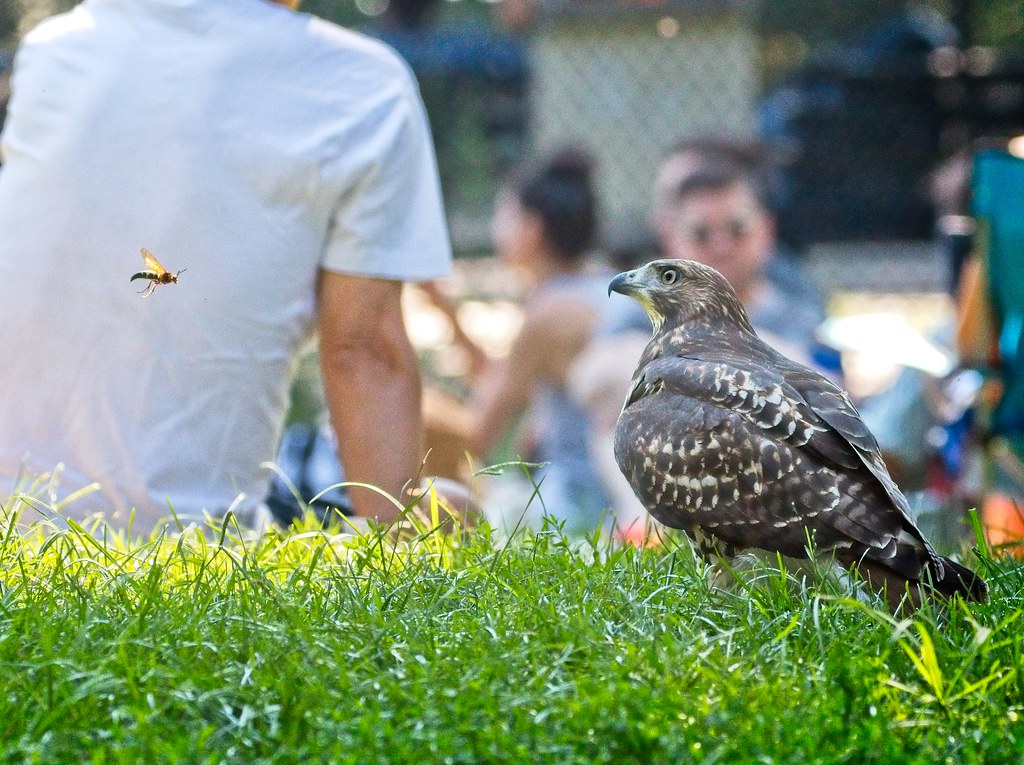 Sunbathers on the lawn were oblivious to the predator blending in among them. 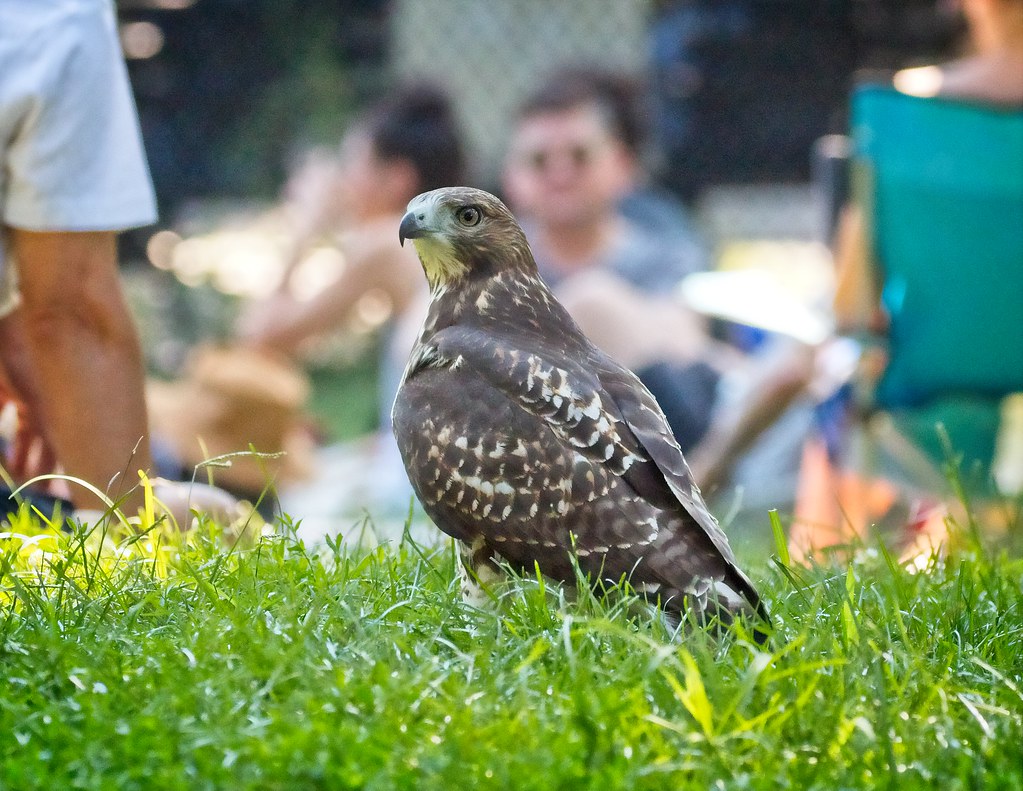 The fledgling has also been exploring man-made perches outside the park.  Below, he sits atop a roof on 7th Street. 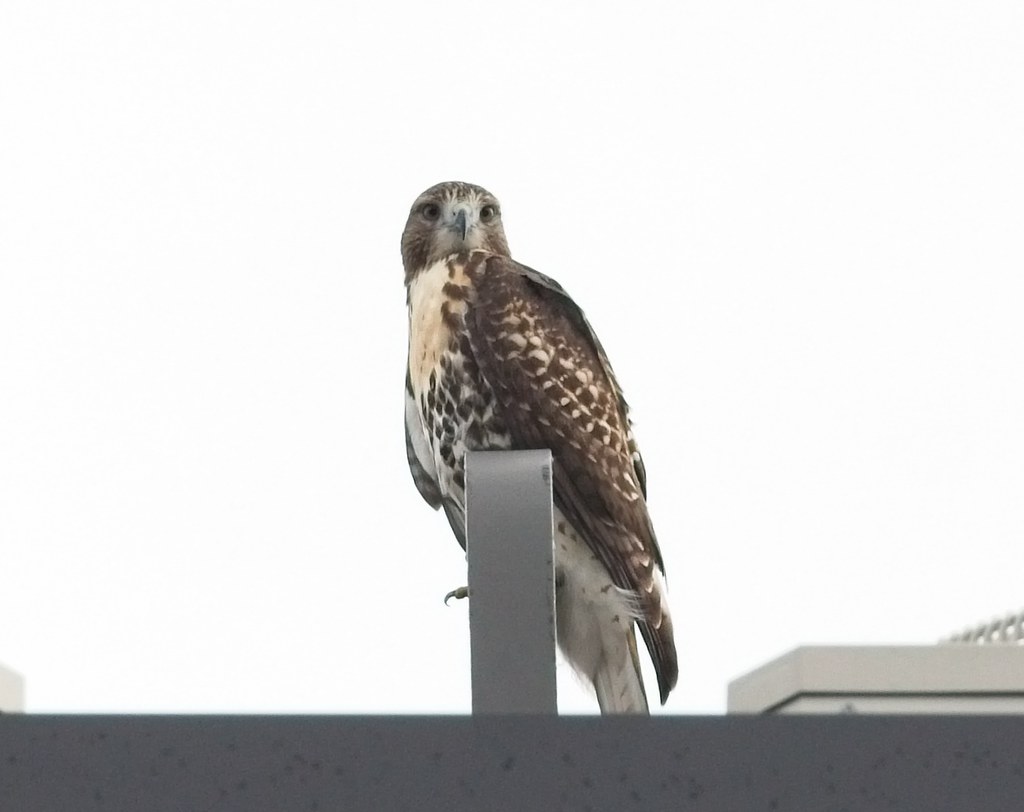 A chimney cover on Avenue A. 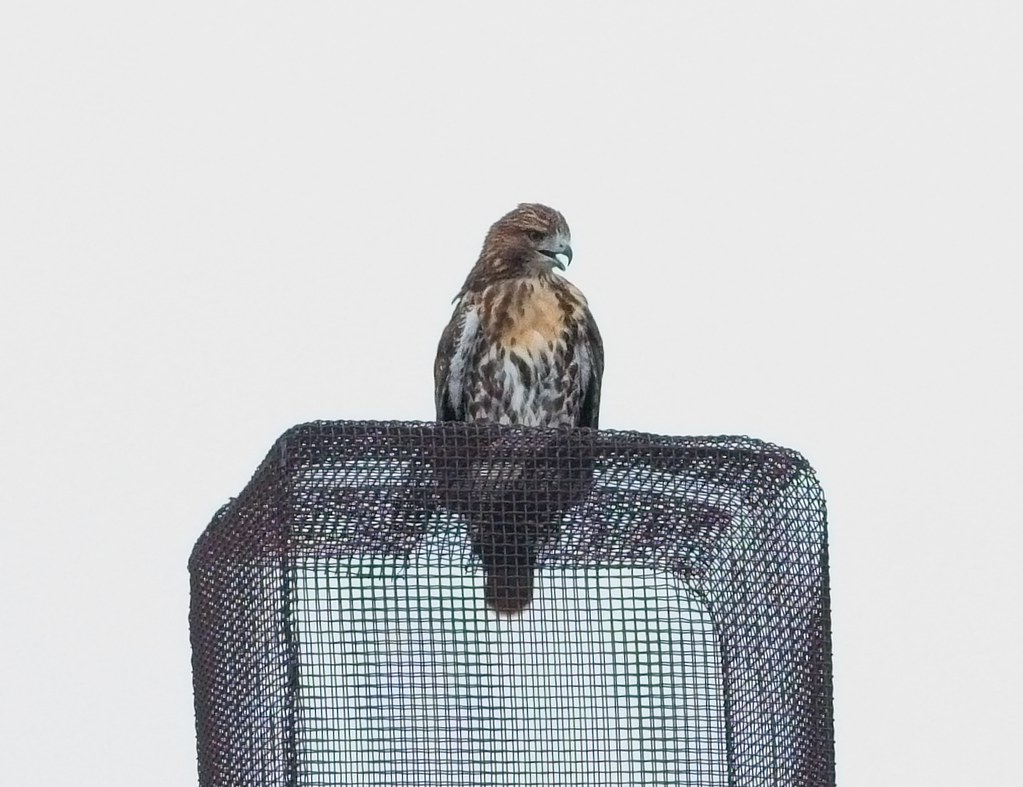 An antenna near 9th Street. 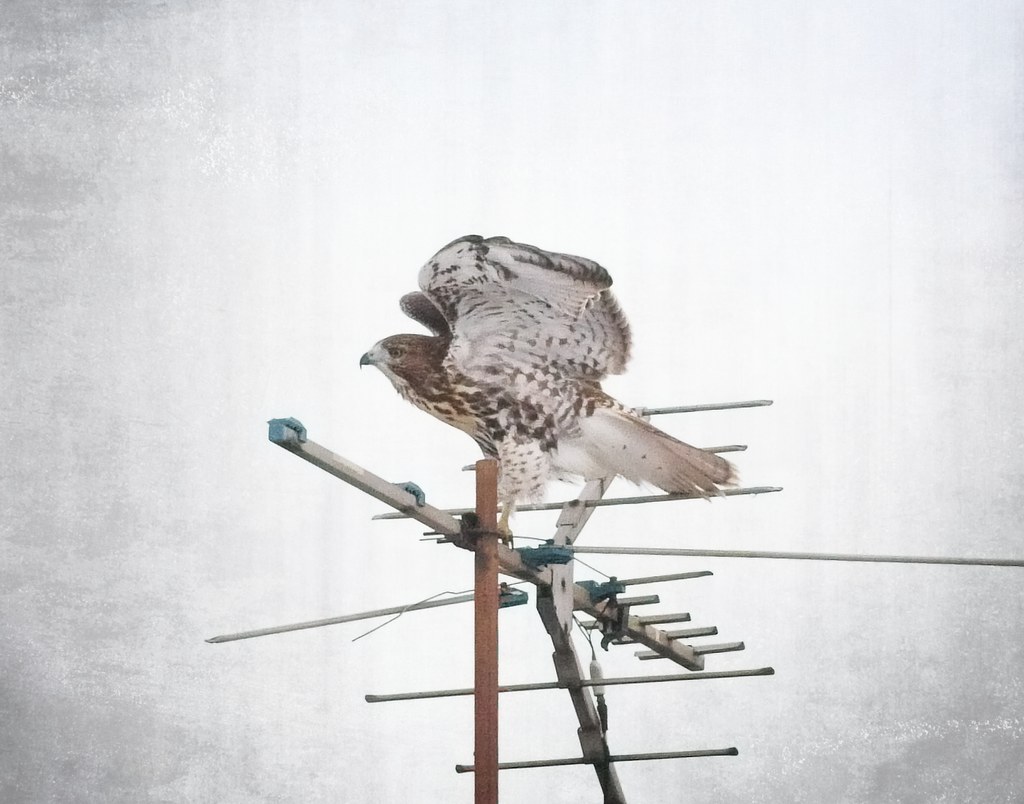 A cornice on St Mark's Place. 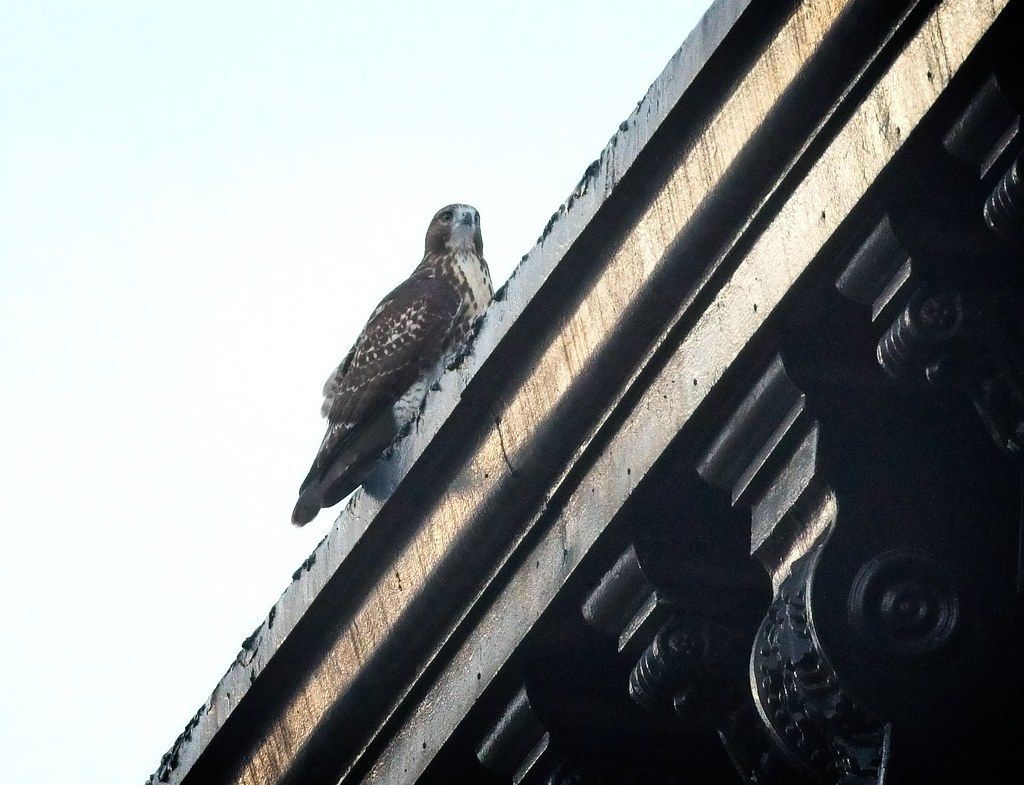 A pipe on Avenue B. 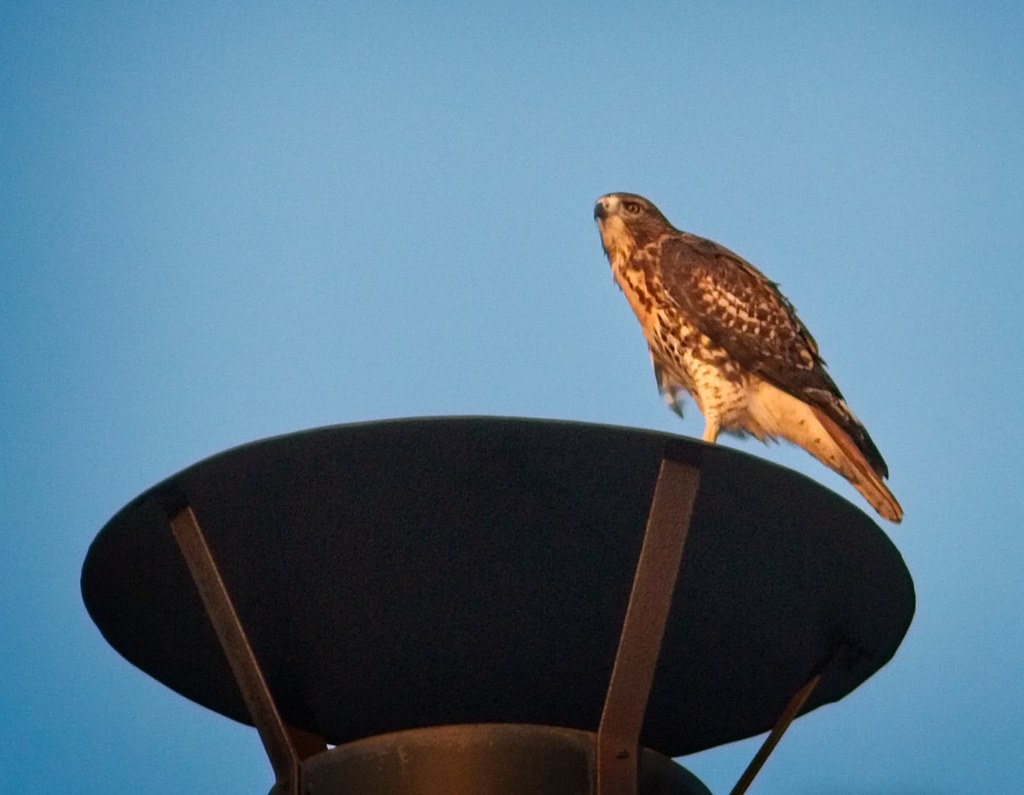 The fledgling's presence on a cellphone transmitter caught the attention of three large crows, who aggressively mobbed him.  One of the crows was pretty creepy looking (below). I have no idea what's going on with its tail. 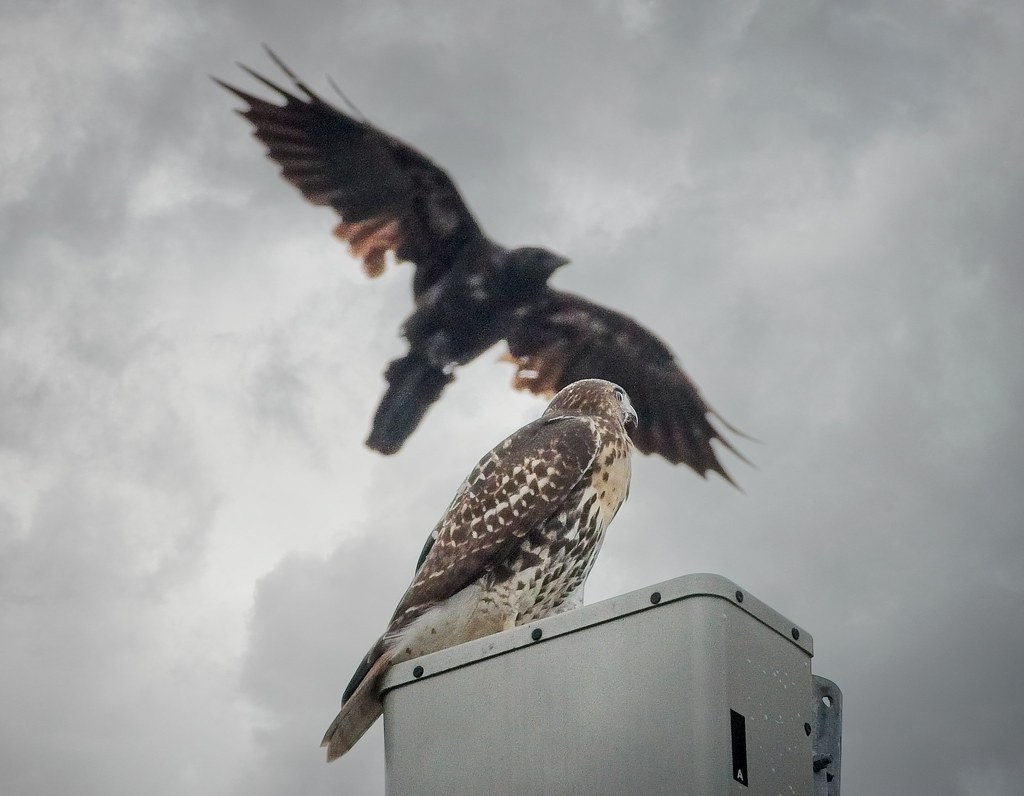 After about two minutes of bullying, mom Amelia swooped in to chase off the crows, saving the day. She'd been perched on one of the Village View buildings at First Avenue and 4th Street, but was still able to keep an eye on the fledgling in the park.

While mom is on territorial defense duty, Christo is in charge of supplementing the fledgling's food. Below, he hunts behind the park offices and is still showing signs of molting, especially in his face. 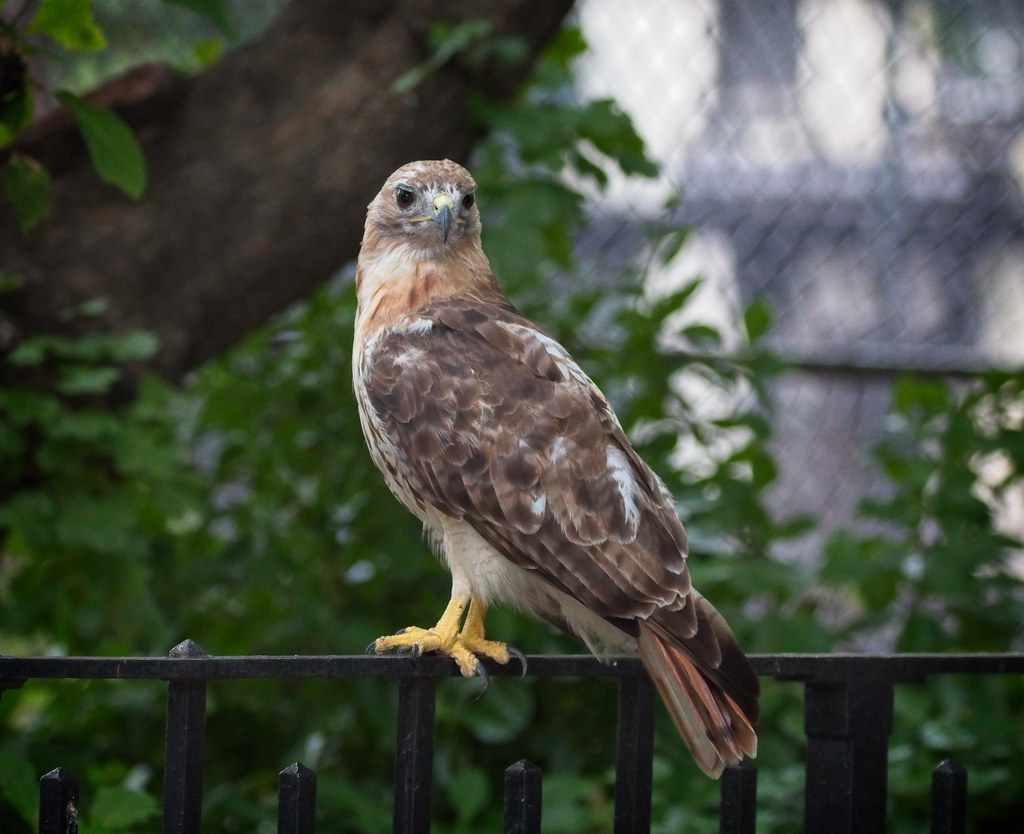 His molting is more visible below (nabbing a pigeon) as he looks very white. His head and wings will look darker once his new feathers grow in. 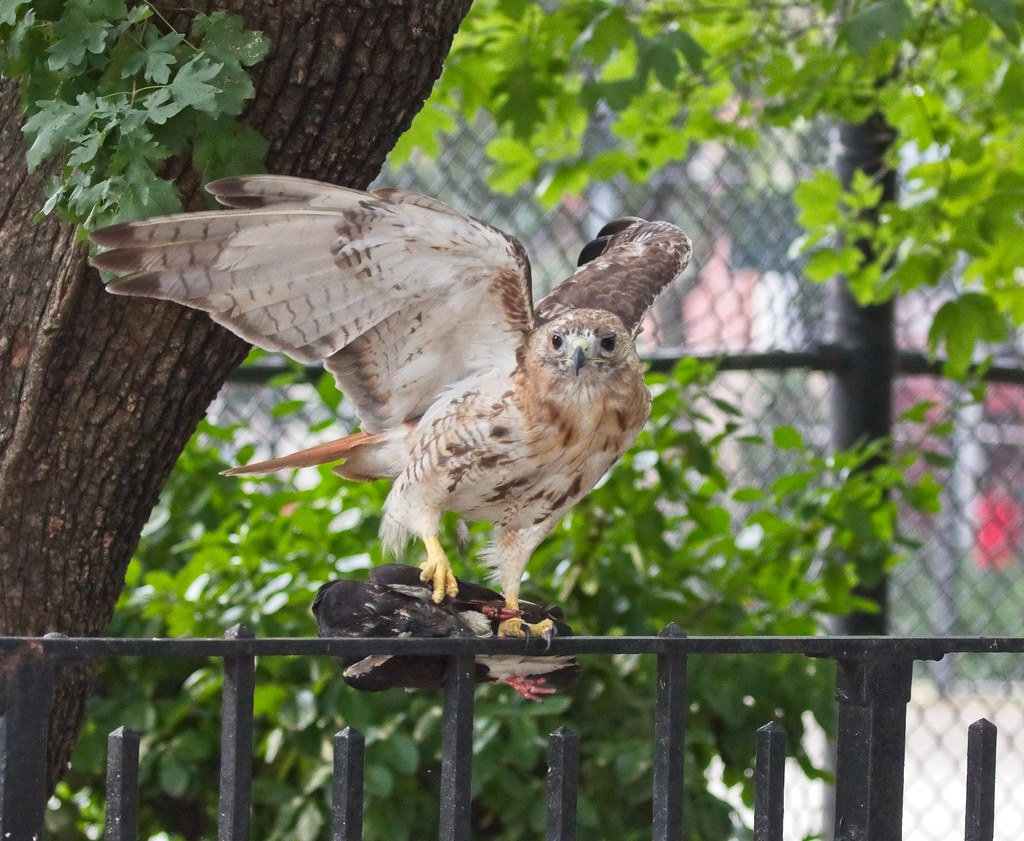 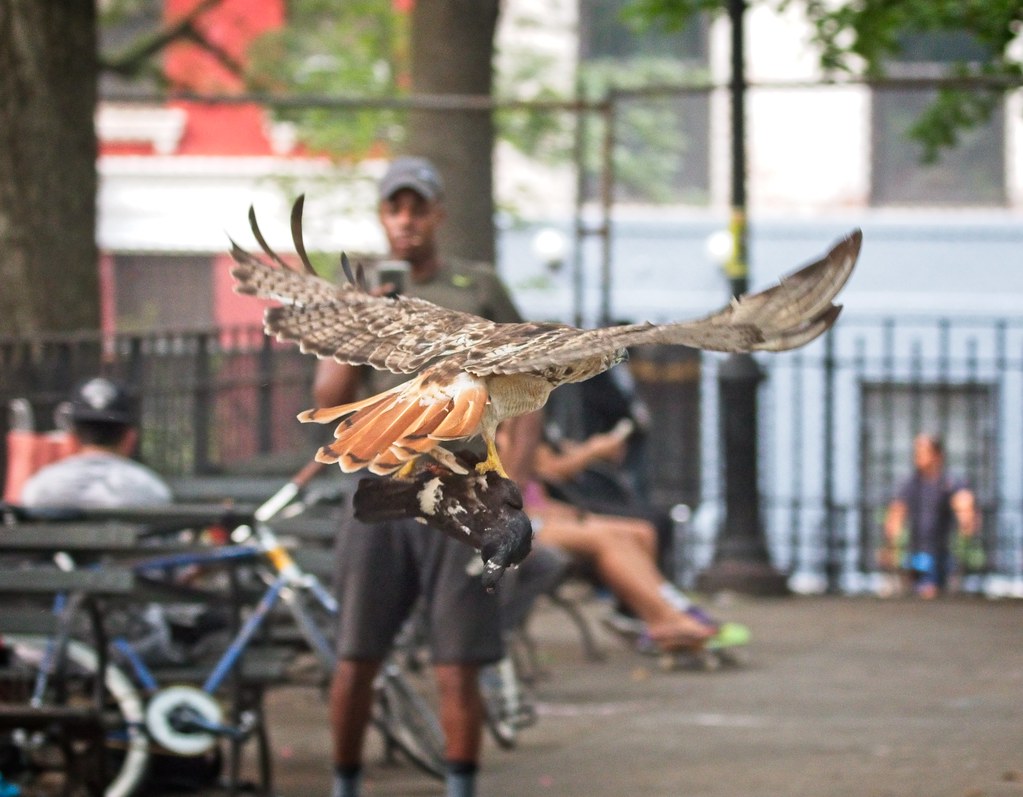 Amelia is also molting, but she doesn't look as dramatically different. She has some patches of white on her face, but otherwise looks normal. Below, she fluffs up on a hot and sultry evening. 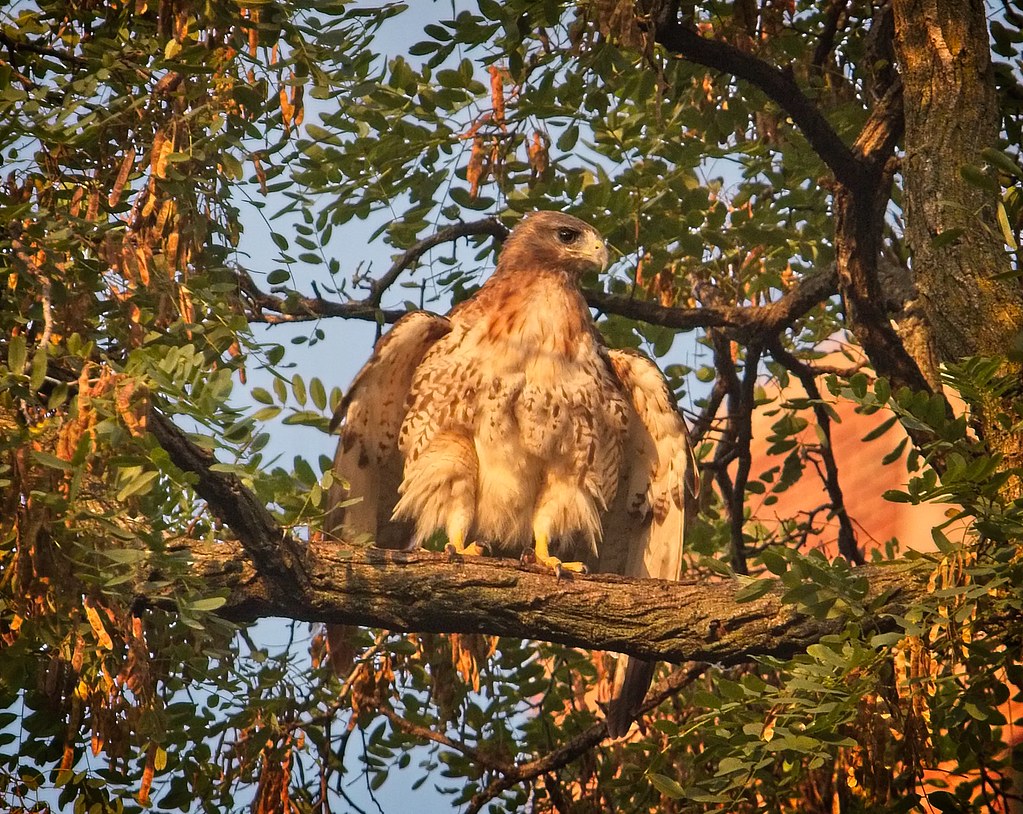 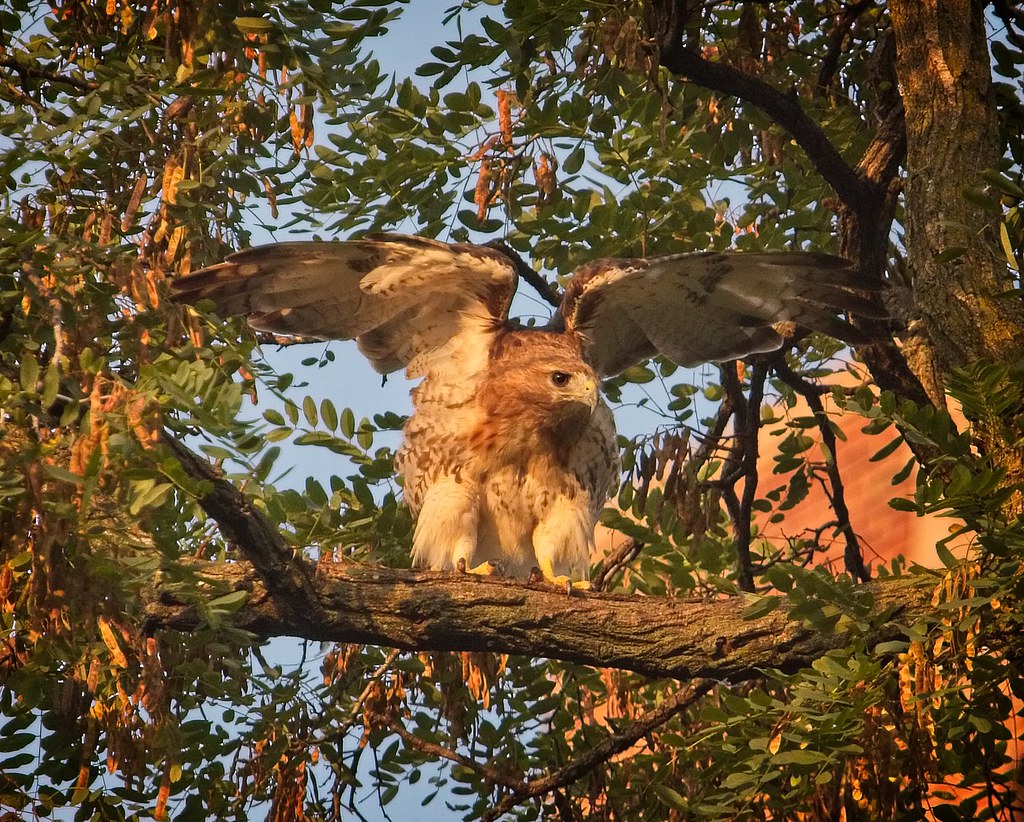 She looks gorgeous in the last light of the day. 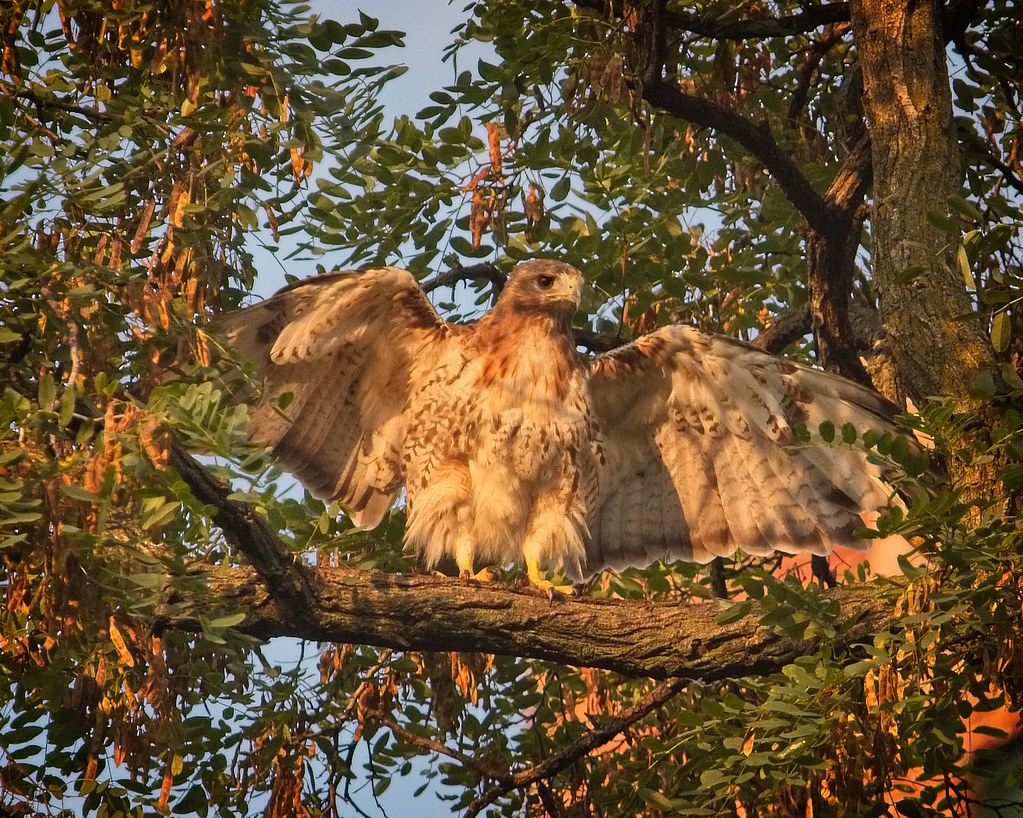 See more recent photos of the Tompkins Square hawks on my Flickr page.