I went to Tompkins Square Park late morning on this Friday the 13th and saw that one hawklet was in the nest and the other was perched a few feet away on a branch of the same tree. I waited around a while, but not much was happening and it was starting to get pretty hot, so I left the park to get some lunch.  As I was waiting for a sandwich, a fellow hawk-watcher friend called to tell me she had just seen one of the chicks fledge!  The time was 2:02pm.

On my way back to the park, I spotted Christo, who was already on the scene at Avenue B and 8th Street. 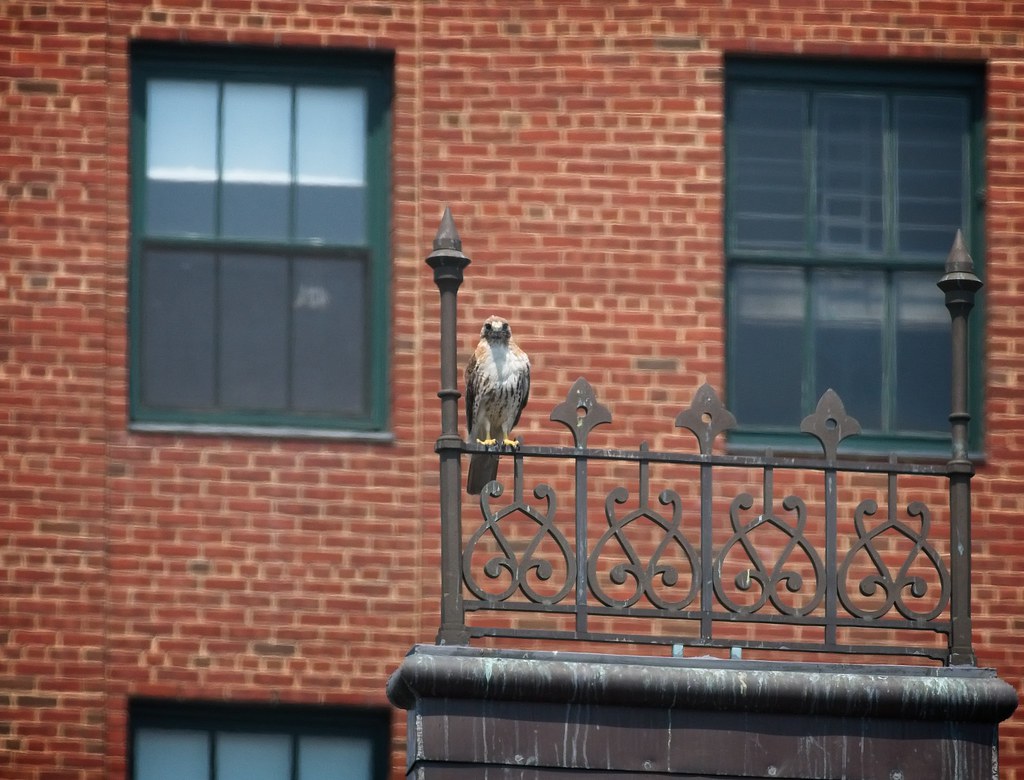 When I rounded the corner, I spotted the fledgling up in the gutter of St Brigid's church.  It was very fortunate my friend saw the fledge, as she was the only witness and we might not have been able to locate the hawk if she hadn't seen where it went. 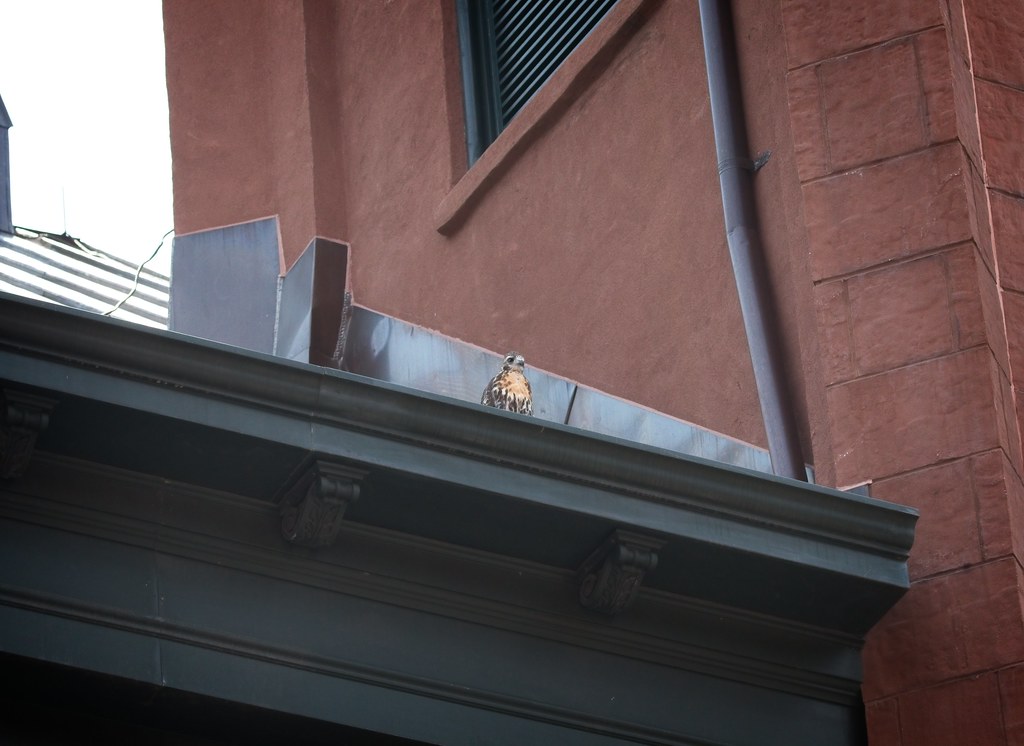 Looking closer, I was surprised to see this is the younger of the two chicks.  My, how things have changed in six weeks! 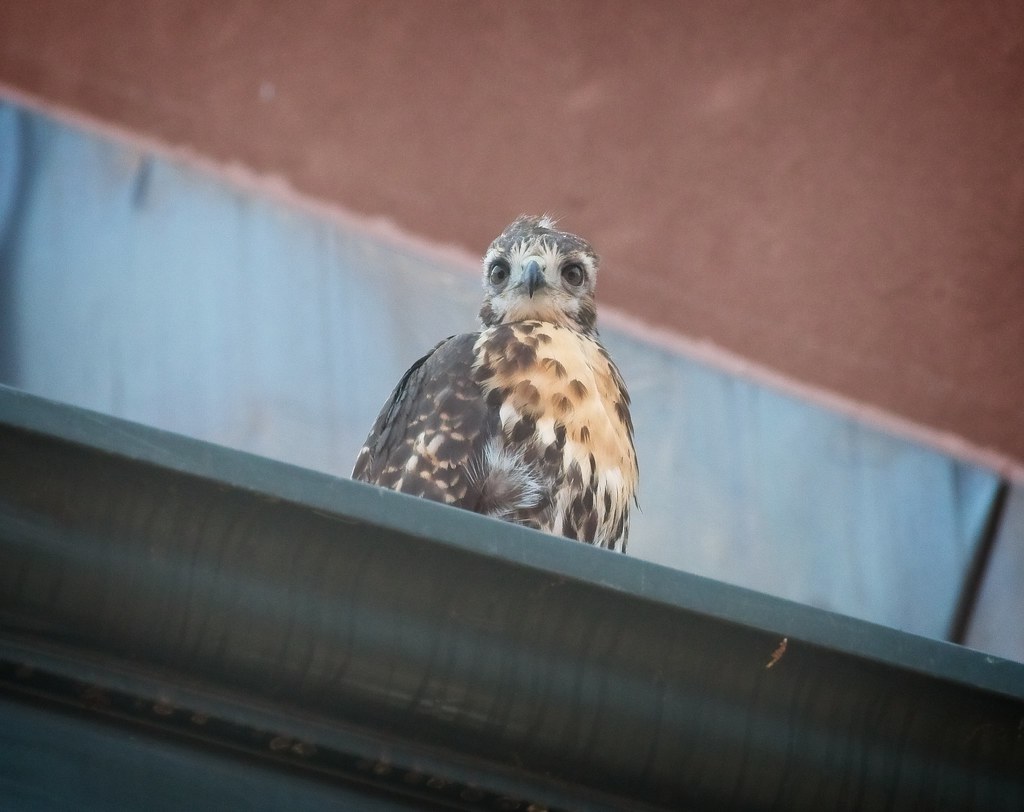 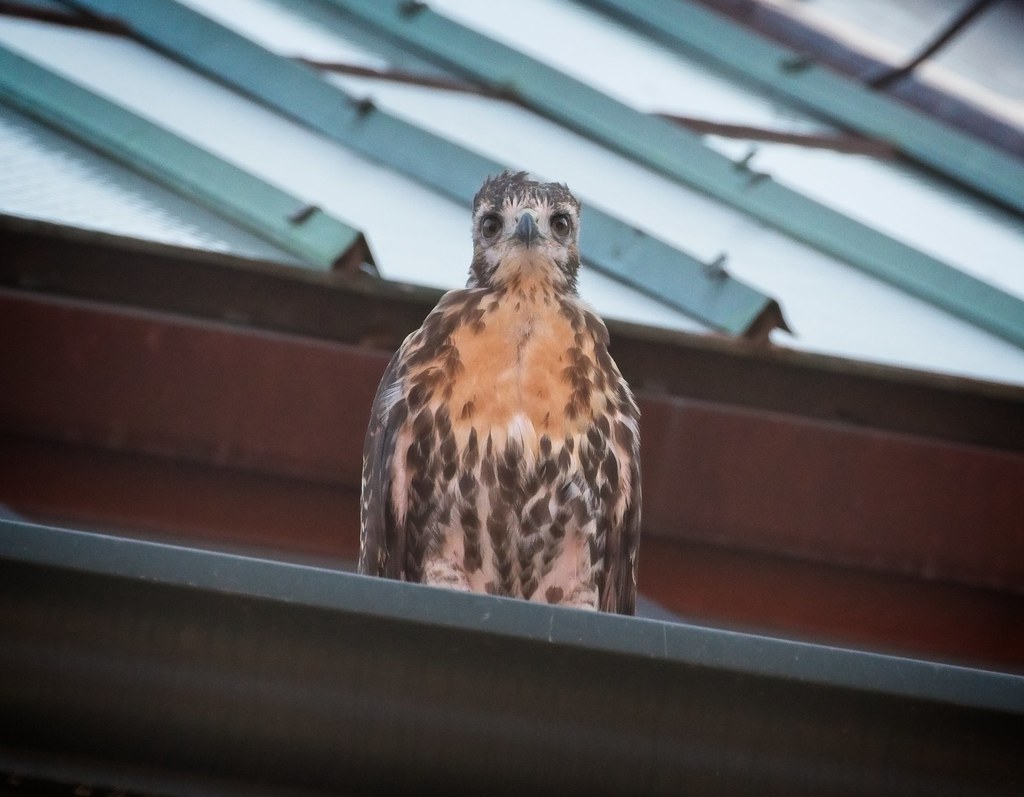 The fledgling still has a tuft of down poking up from the top of its head. 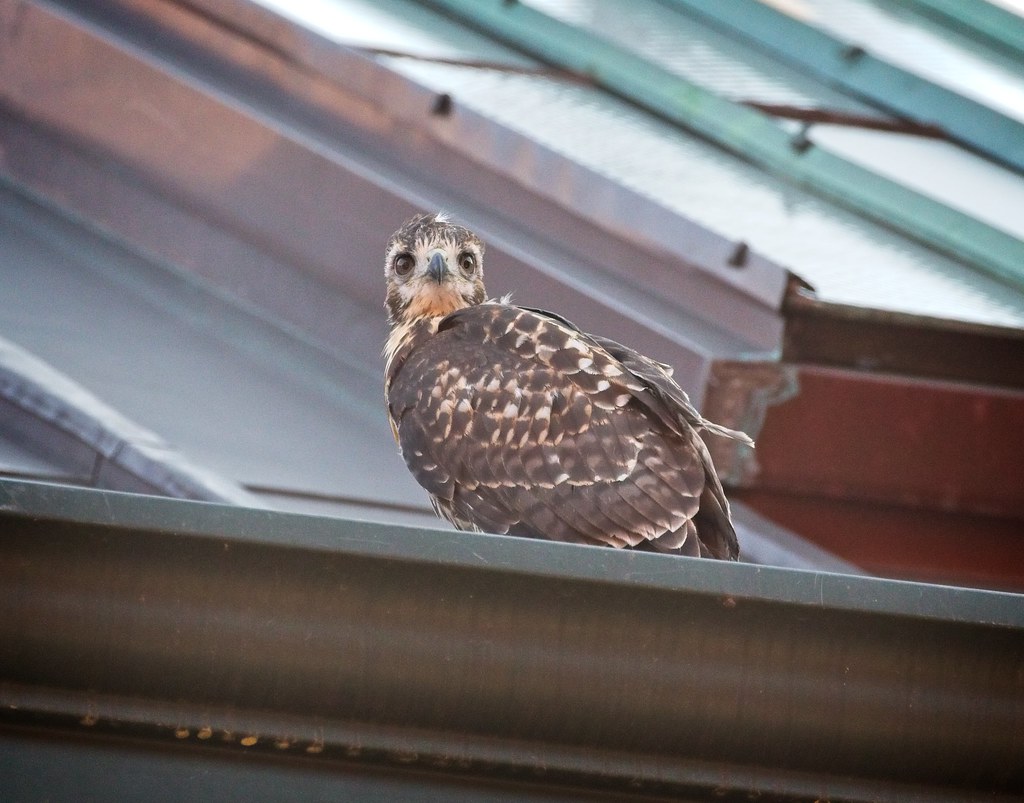 While the fledgling rested on the church roof, mom Amelia flew in and took a dip in the gutter.  She remained in there for over an hour, simultaneously cooling off and keeping an eye on her kid.  She also kept her eyes on me, which became unnerving after a while as she stayed low in the gutter with only the top of her head visible. She stayed in there for over an hour. 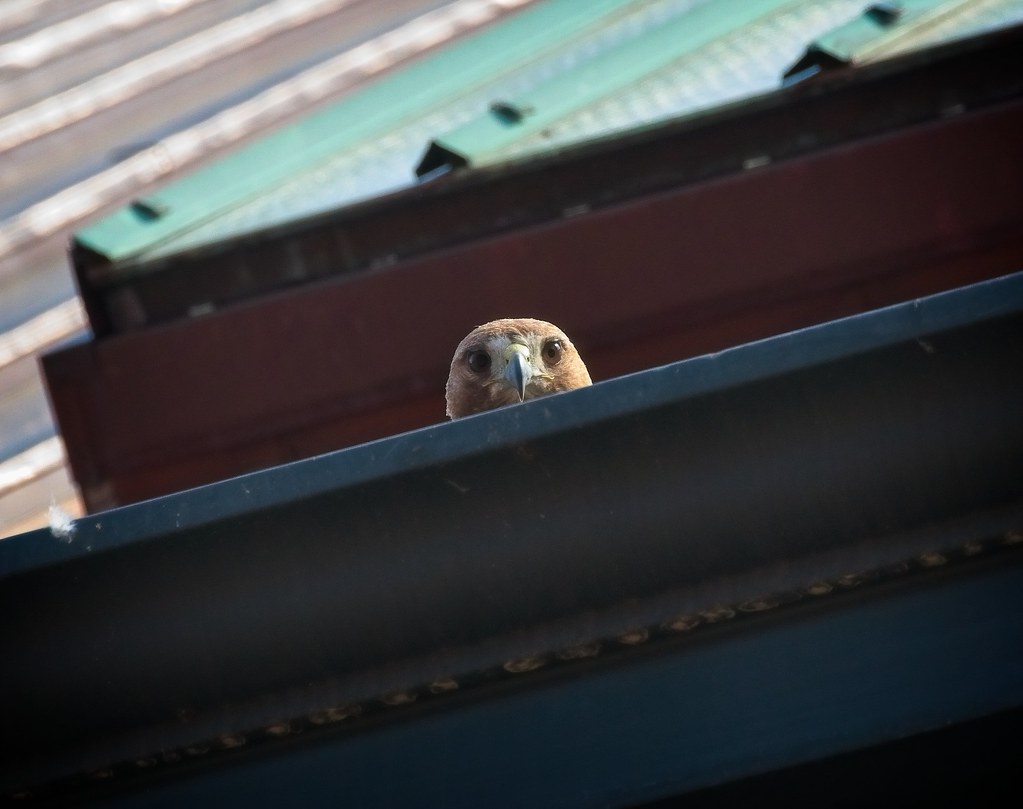 From her vantage point, Amelia could probably see across the street to the park where the other hawk chick was branching and flapping its wings. 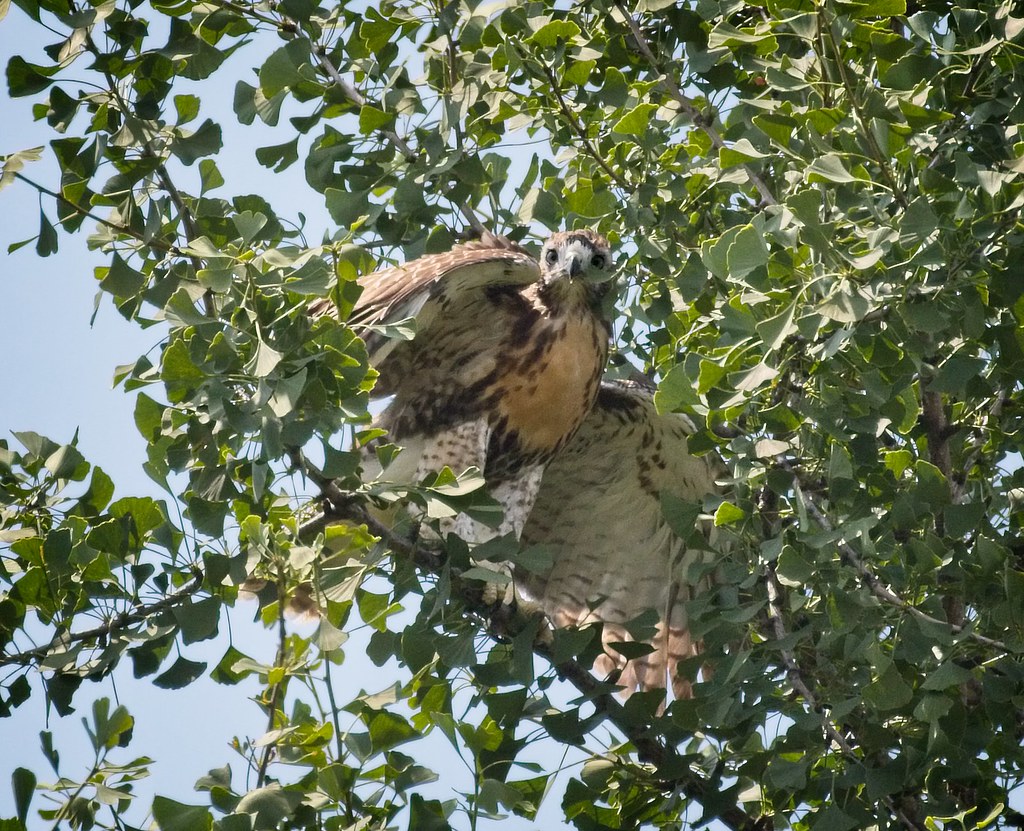 I really hoped this one might fledge as well, but it opted to spend another night at the nest. 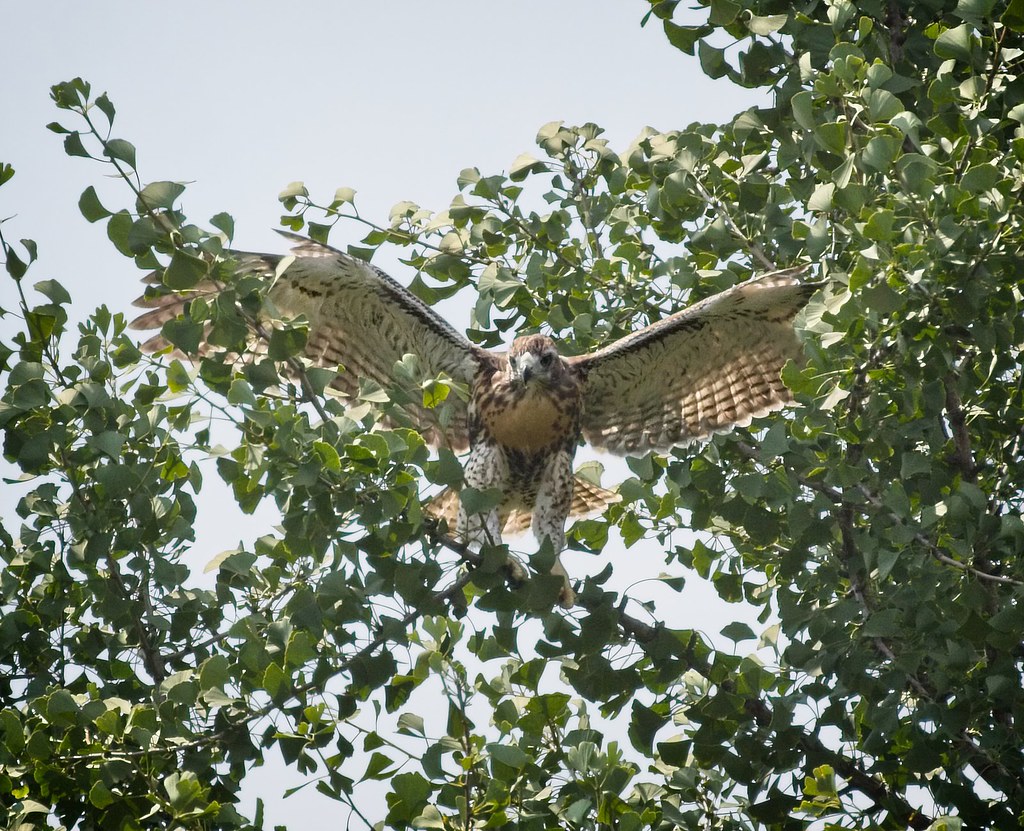 Back at St Brigid's, the fledgling began to explore the length of the gutter along the roof. 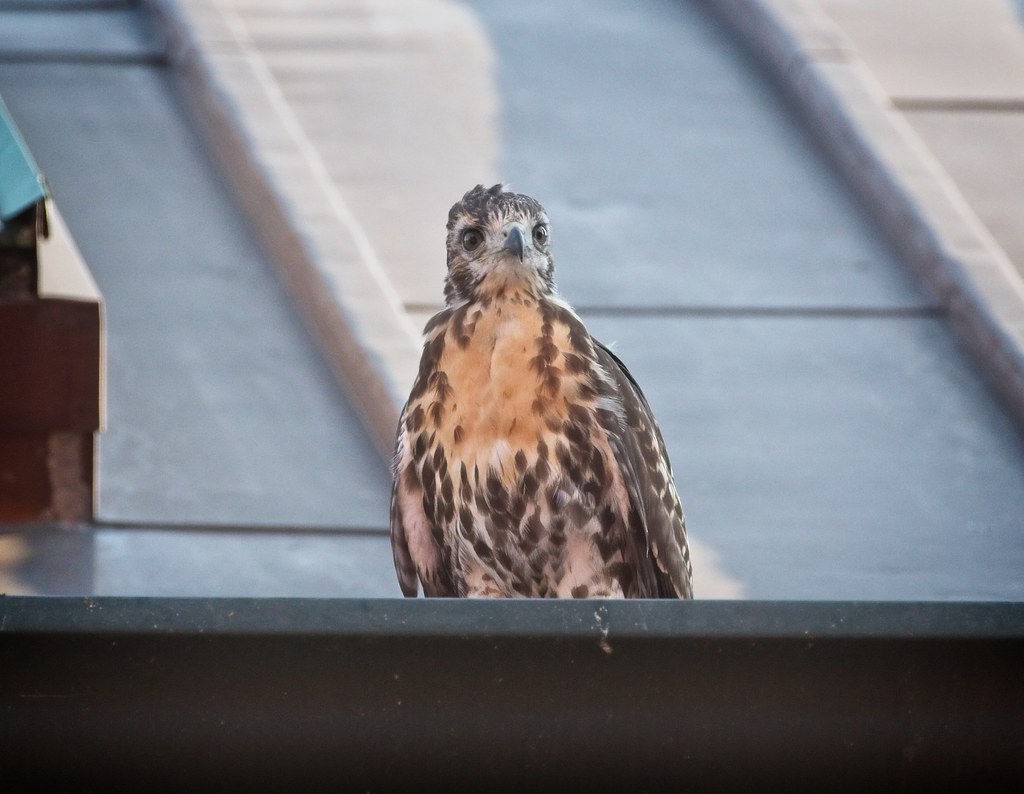 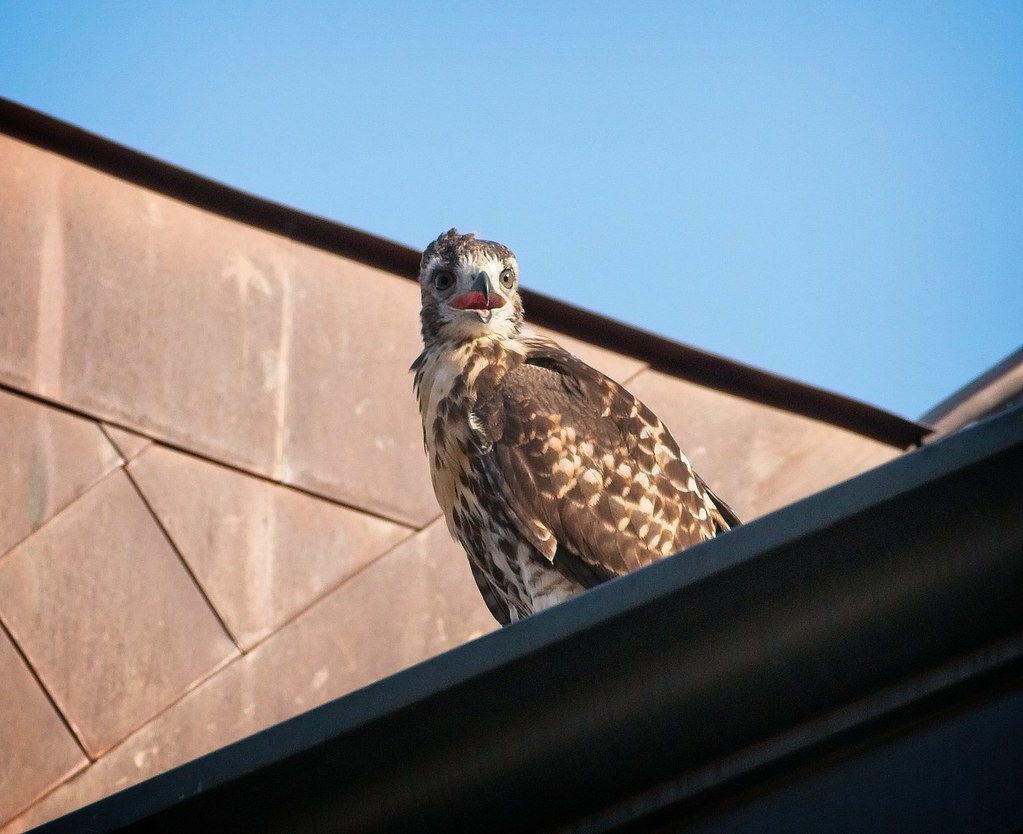 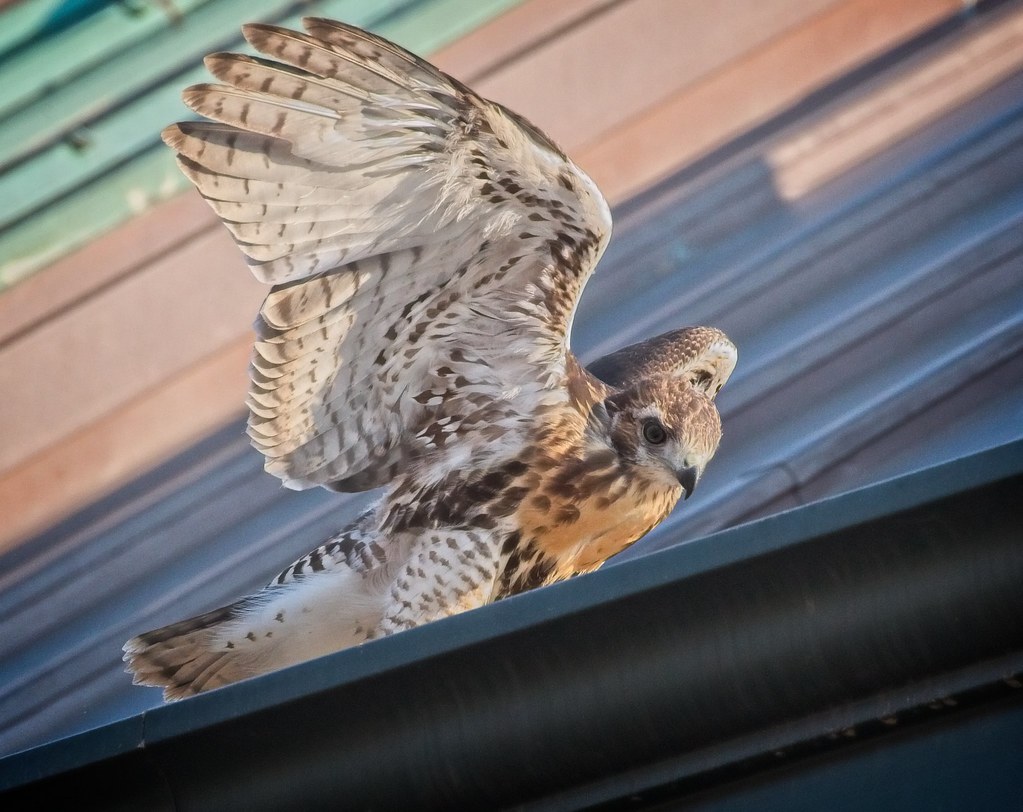 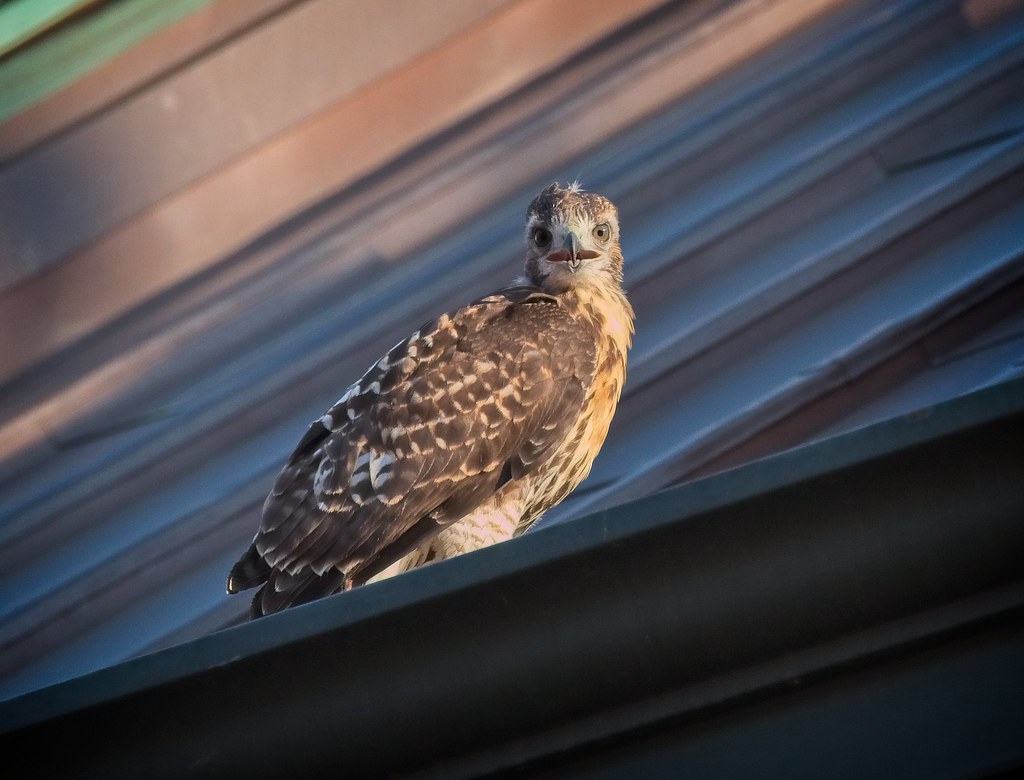 At one point, Christo chased off a kestrel high above the church.

All remained calm below where pigeons felt confident enough to bathe close to the fledgling. 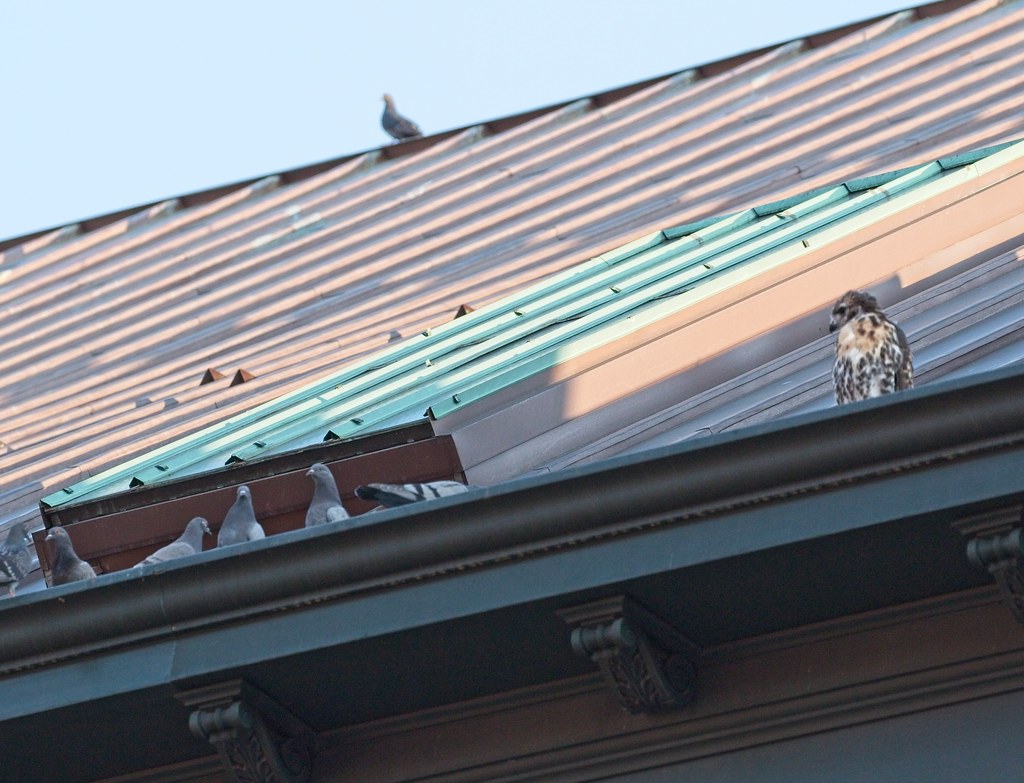 Such a baby face! 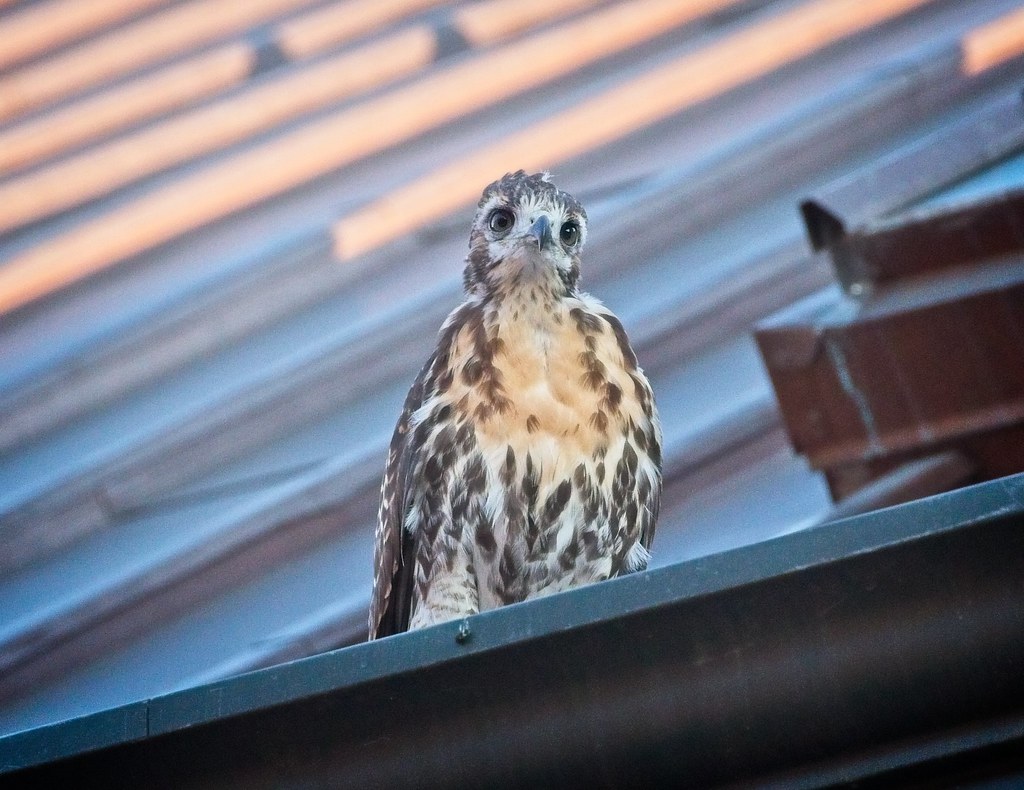 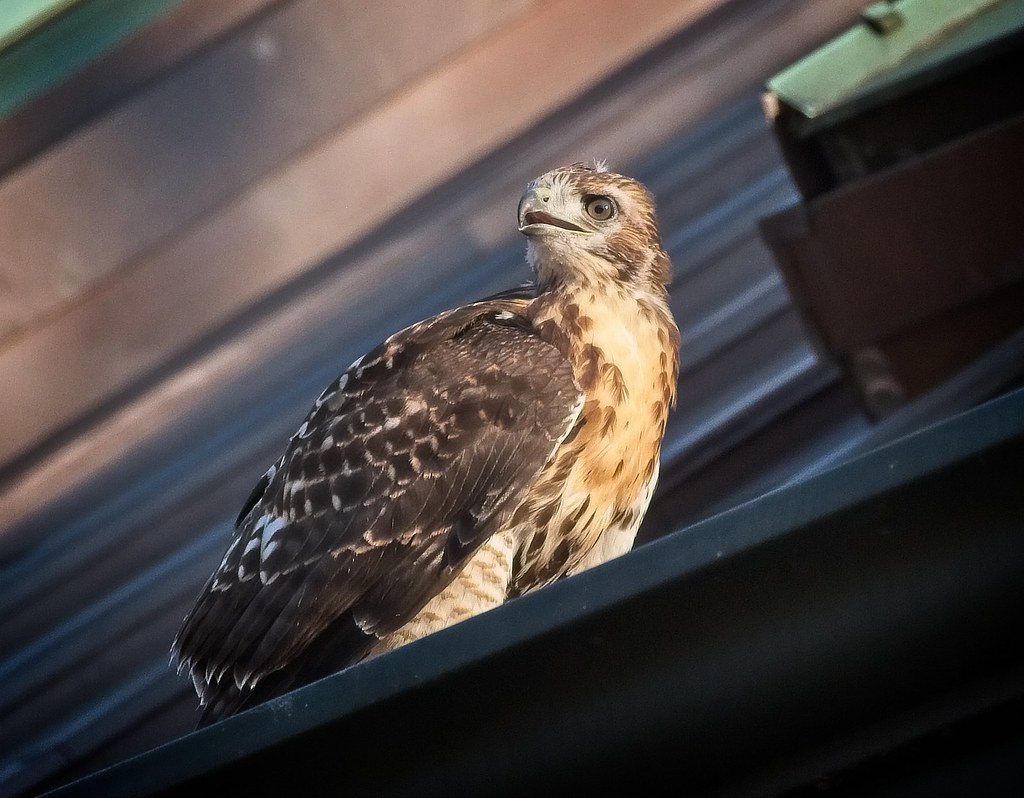 At 7:40pm, the fledgling decided to leave the church and venture east on 8th Street. 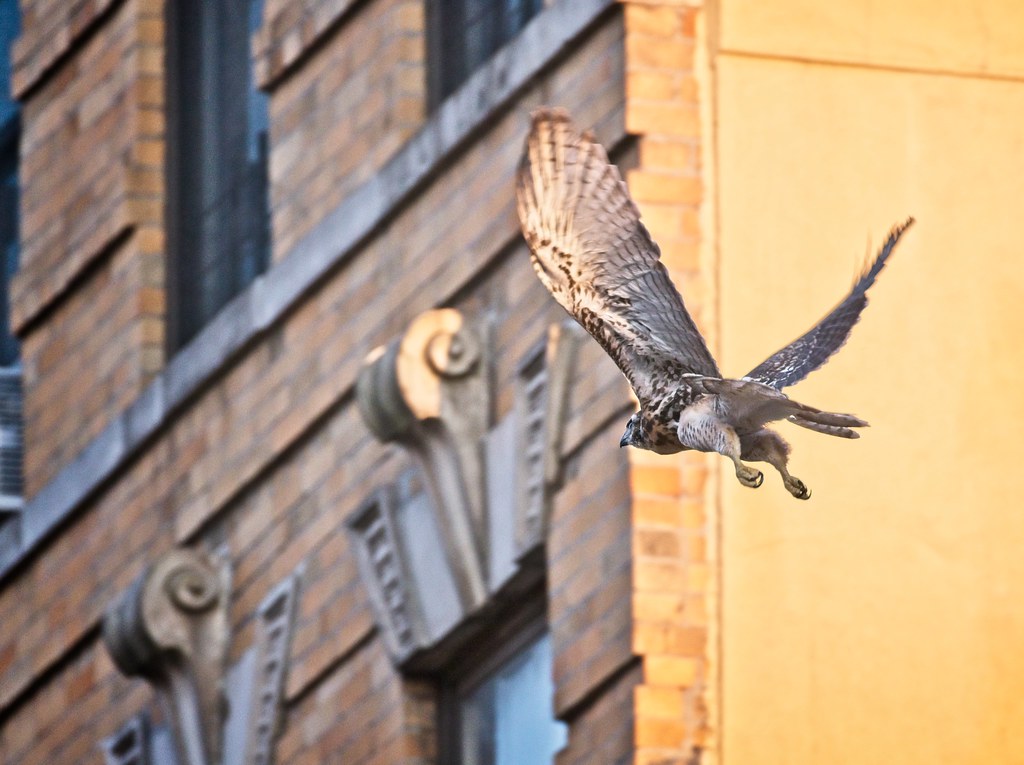 It aimed for a fire escape... 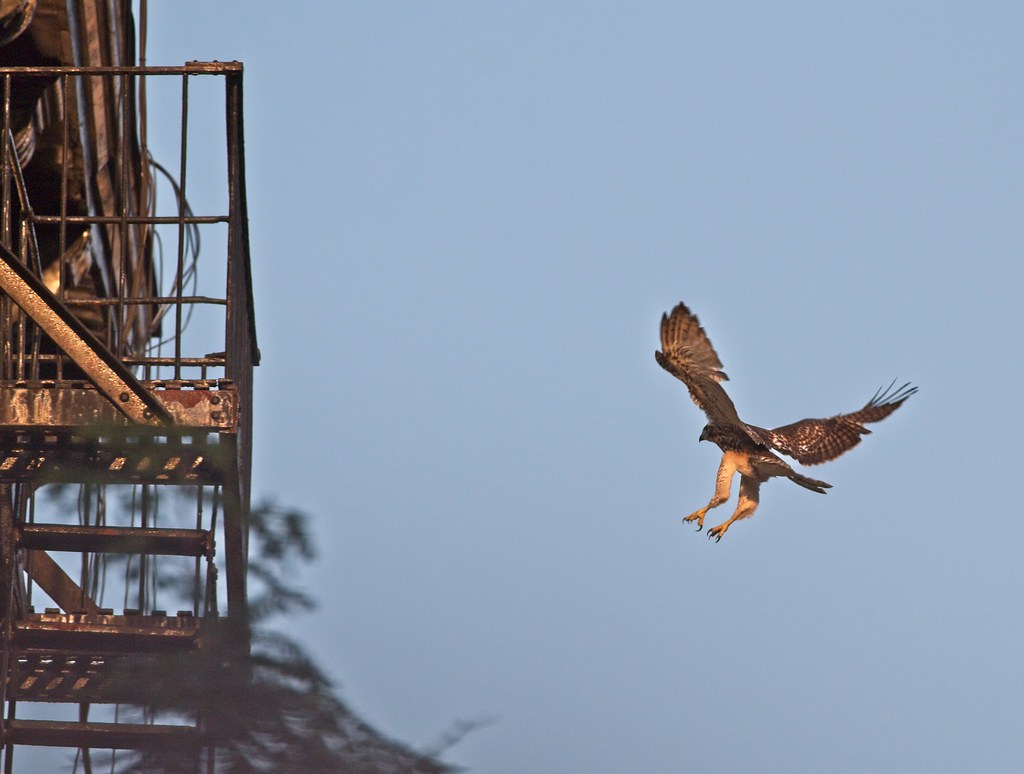 ...and managed to land between the rails rather than on top of the railing. 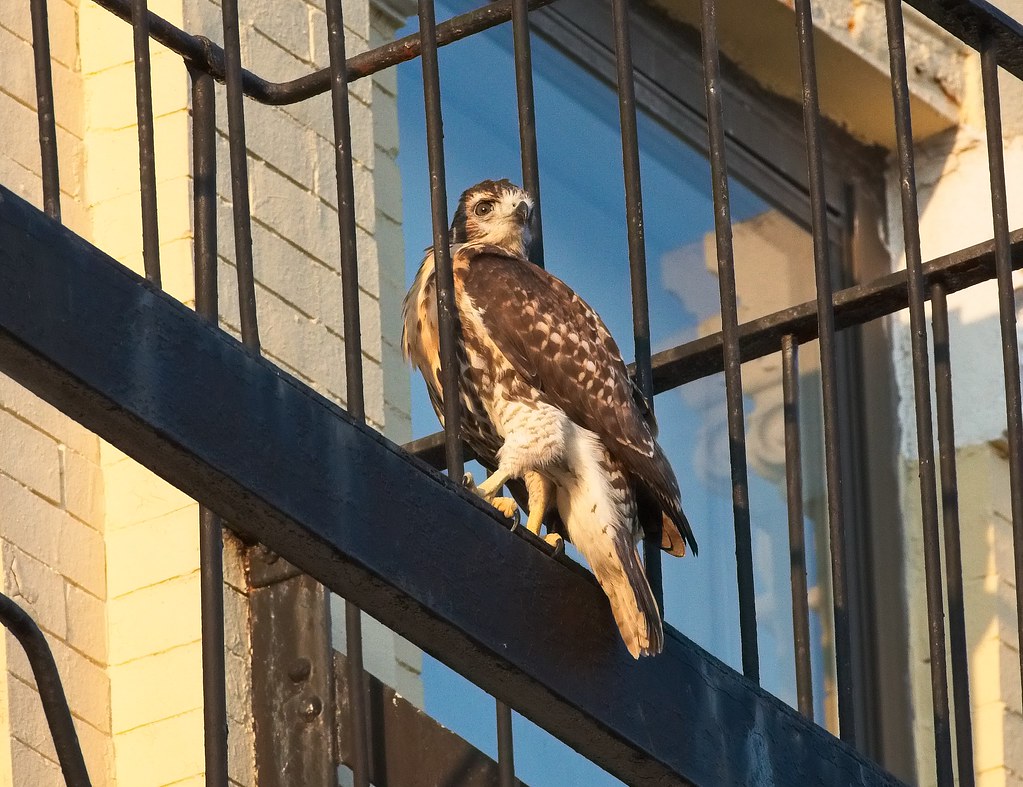 The hawk ended up wedging itself between the bars and seemed not to be able to move for quite some time.  A crowd of concerned neighbors gathered and discussed what to do if the hawk needed help.  Thankfully, the fledgling eventually freed itself and went to roost on the top of the fire escape platform. Thank you to all the neighbors who were ready and willing to perform a rescue; let's hope the little one has learned a lesson!

Stay tuned for more updates as the other hawklet is expected to fledge any time.