The New York State Department of Environmental Conservation has completed the necropsy on the Tompkins Square red-tailed hawk nestling who died on June 9. The cause of death was rodenticide poisoning.

She was also determined to be female. 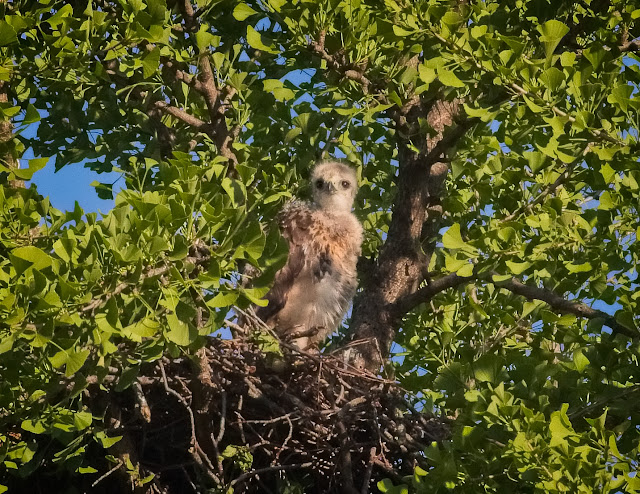 The hawk's sibling had passed away in the nest on May 31 and it is assumed the pair suffered the same affliction (to date, the body of the first chick has not been found).

Secondary rodenticide poisoning happens when the chicks are fed poisoned rats, mice or any other prey that has ingested rodenticide. The parents, Christo and Amelia, likely didn't eat the same food, or not as much of it, so didn't die. However, they are exposed to the same danger every time they eat.

The NYC Parks Department does not use rodenticide in Tompkins Square Park. However, it is used throughout the city and the hawks do not restrict their hunting to the park, so they can pick it up anywhere.

Unfortunately, hawks being poisoned is nothing new here in the city and yet it is totally preventable. Back in 2016, I posted about a hawk who died before my eyes in Collect Pond Park, near City Hall. Over three years later, the danger is still out there and several hawks have died since that tragedy.

The Parks Department has been using dry ice to control rats in Tompkins Square. I think it's very effective and is not toxic to other animals, plants or people. However, if you look around the park or the streets of the East Village on any given day, there is trash and food everywhere. Until we, as a community, stop feeding the rats, nothing will change.

Private property owners can get more information about dealing with rats at the NYC Rats Information Portal.

Everyone should check out Raptors Are The Solution (RATS) for information about alternative pest control.