When I visited Tompkins Square on Sunday afternoon, both red-tail fledglings were hanging out in trees on the south side of the park.  After a while, Ten came to the ground to play in the grass. 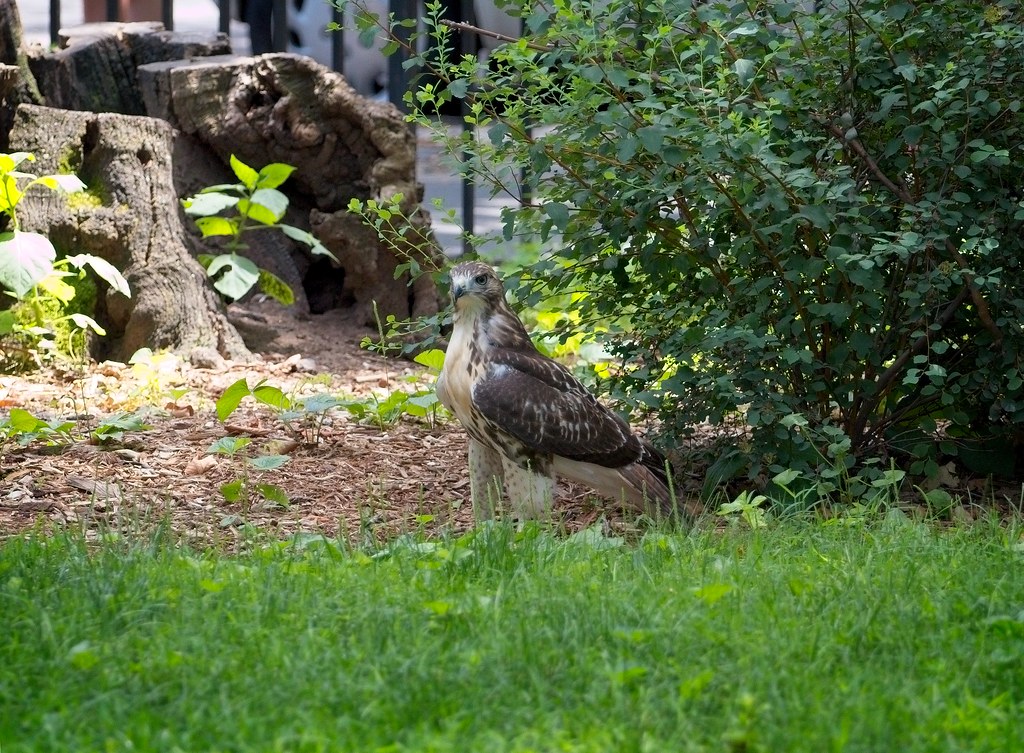 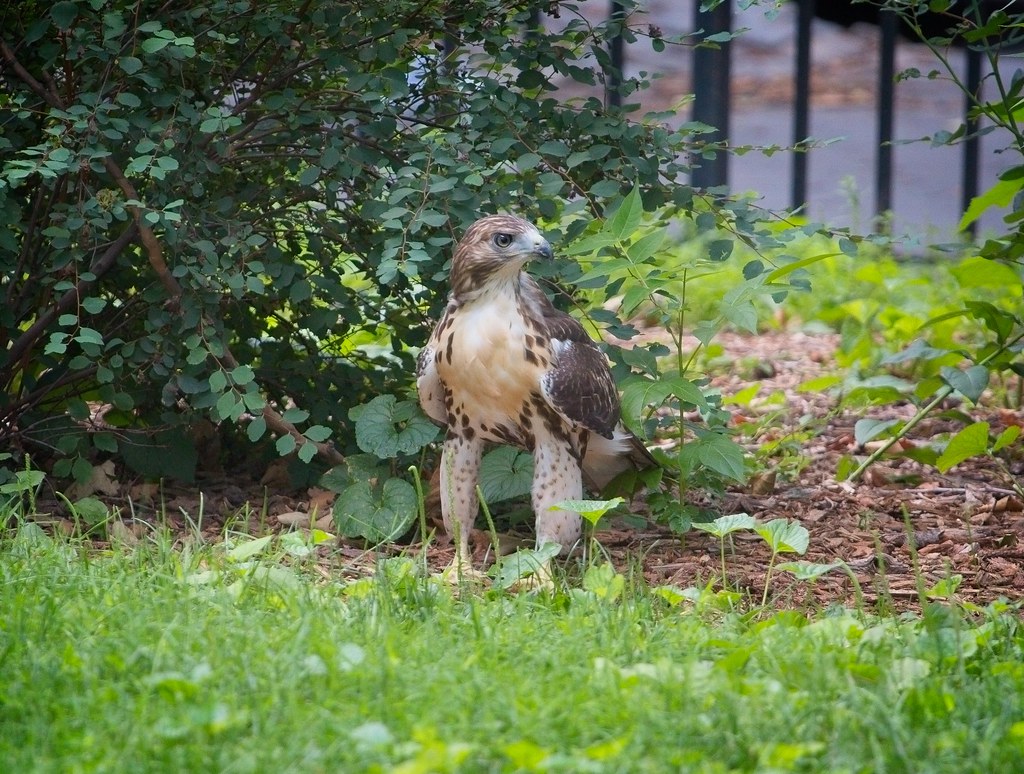 She pounced on a few leaves before flying up to a tree overlooking the chess tables.  A short while later, some people let their unleashed dogs into the grassy area.  I keep saying it, but please keep dogs out of the fenced-in areas.  The fledglings are still learning to fly and are vulnerable when on the ground.

Perhaps seeking a new point of view, Ten flew to the rooftops along 7th Street.  This was the first time I've seen her leave the park. 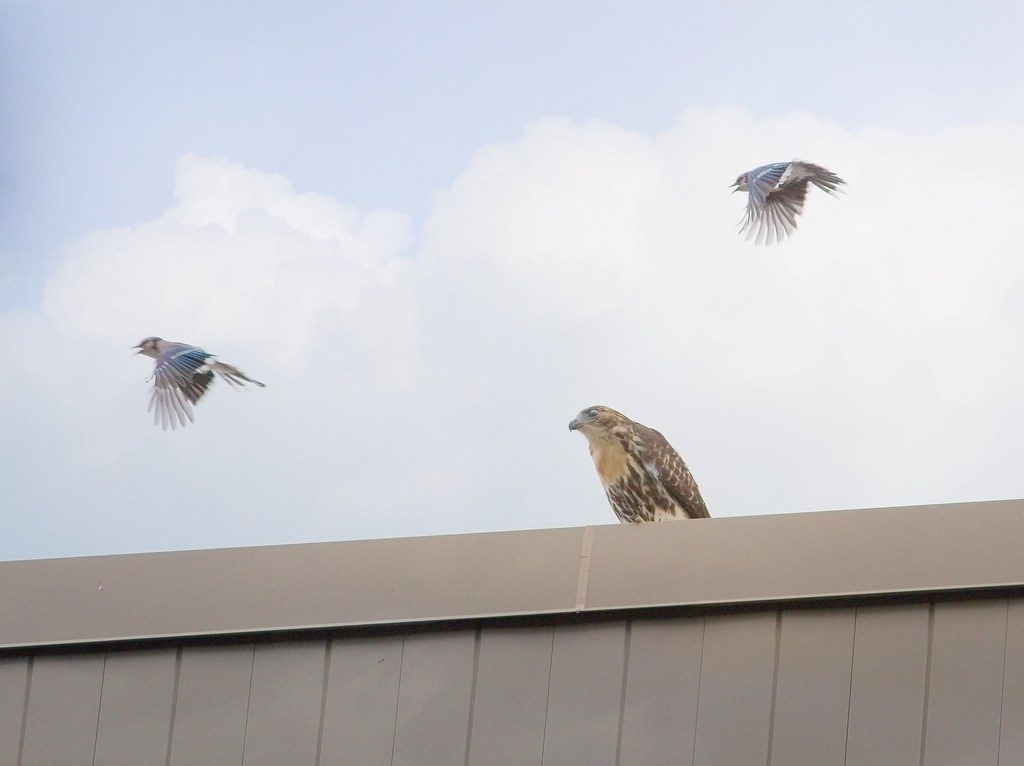 A pair of blue jays wasn't too happy to see the hawk getting adventurous. 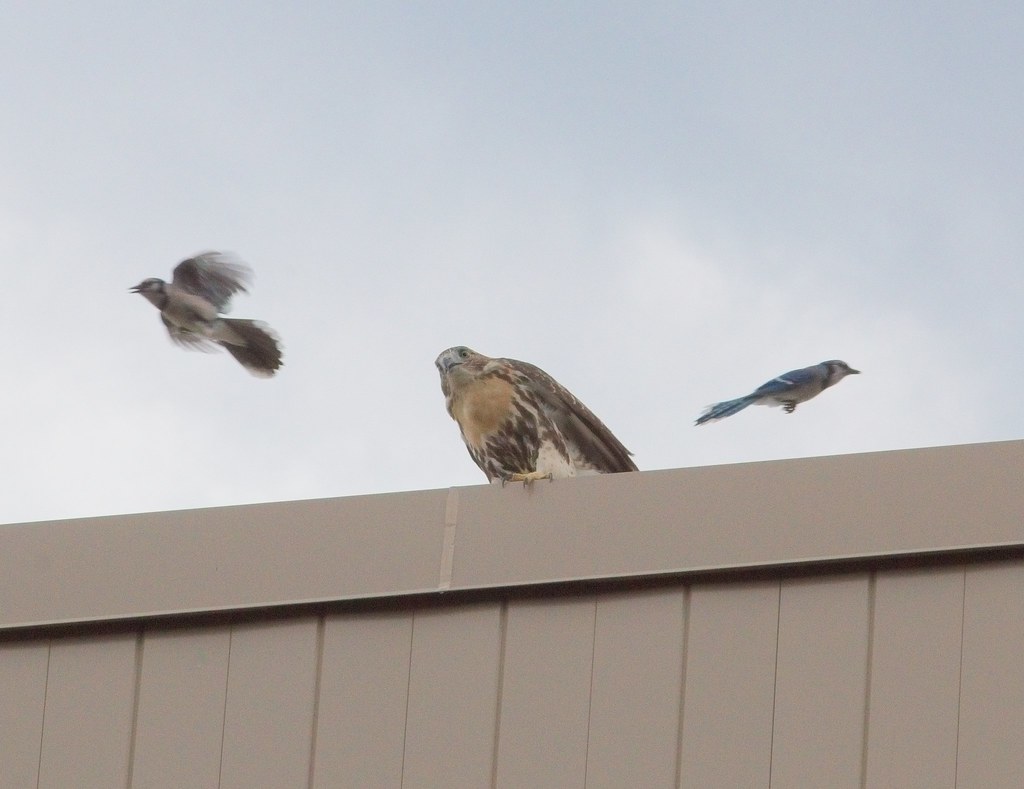 While she was on the roof, Flatbush flew to the tree over the chess tables where Ten had previously been.  Flatbush could see her from his perch and he watched intently as the blue jays dive-bombed his step-sibling. 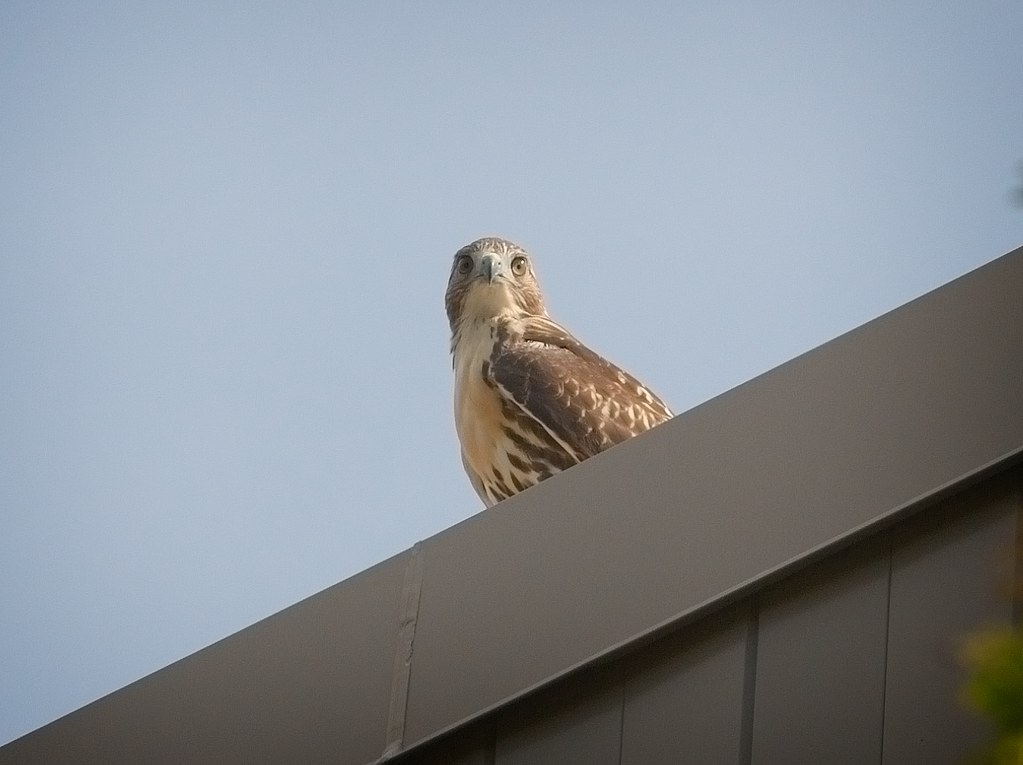 After being bullied for about half an hour, Ten took a snooze, dangling her wing over the ledge. 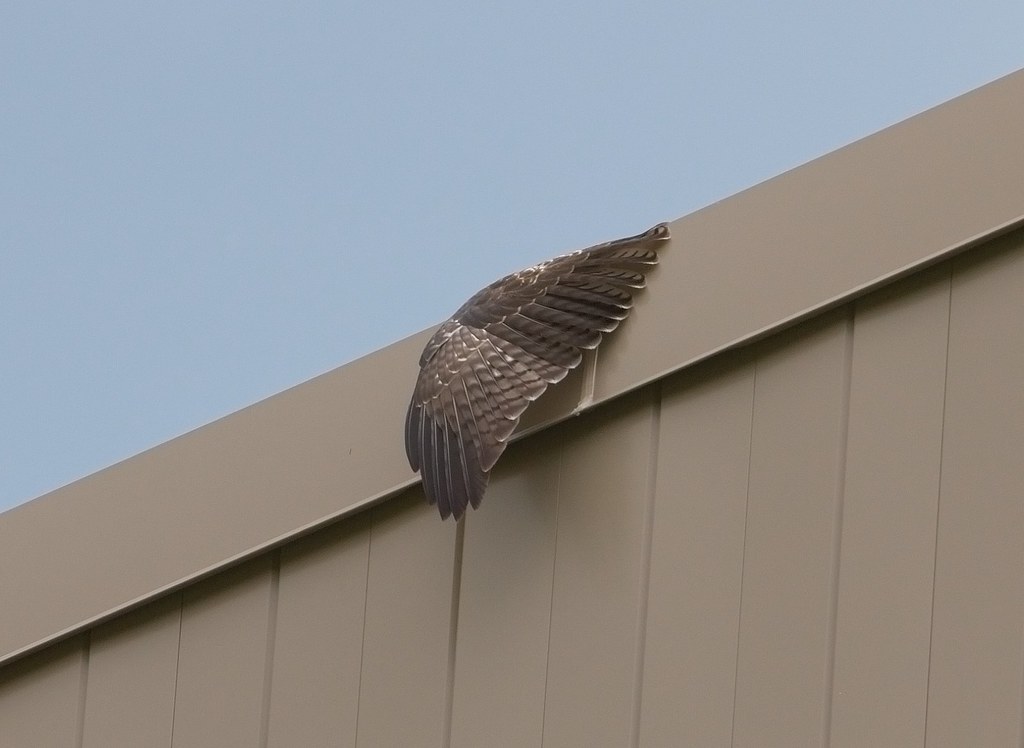 When she was done with her nap, she joined Flatbush on a branch.  In the photos below, she is on the left and he is on the right. 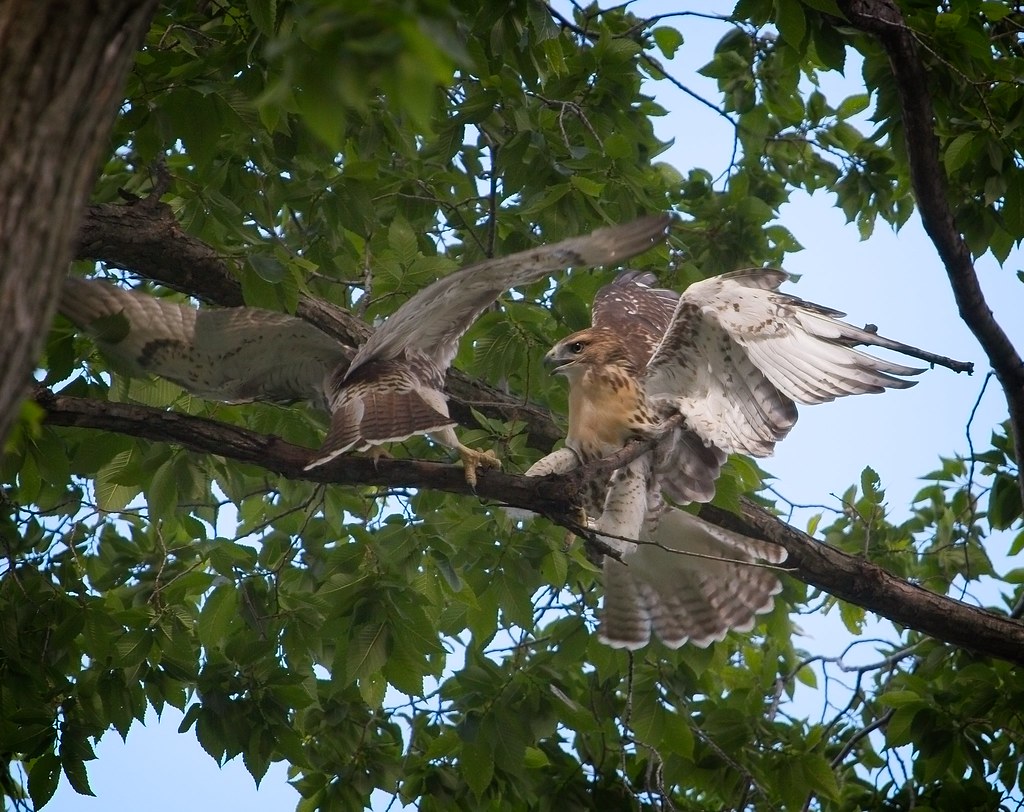 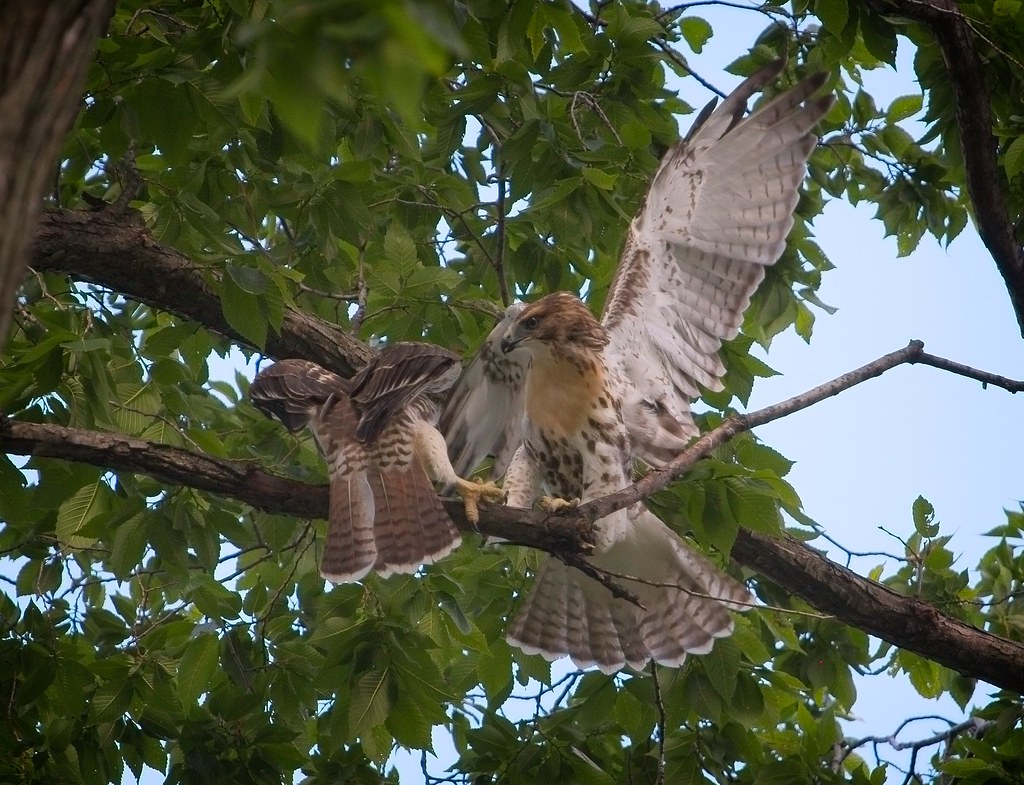 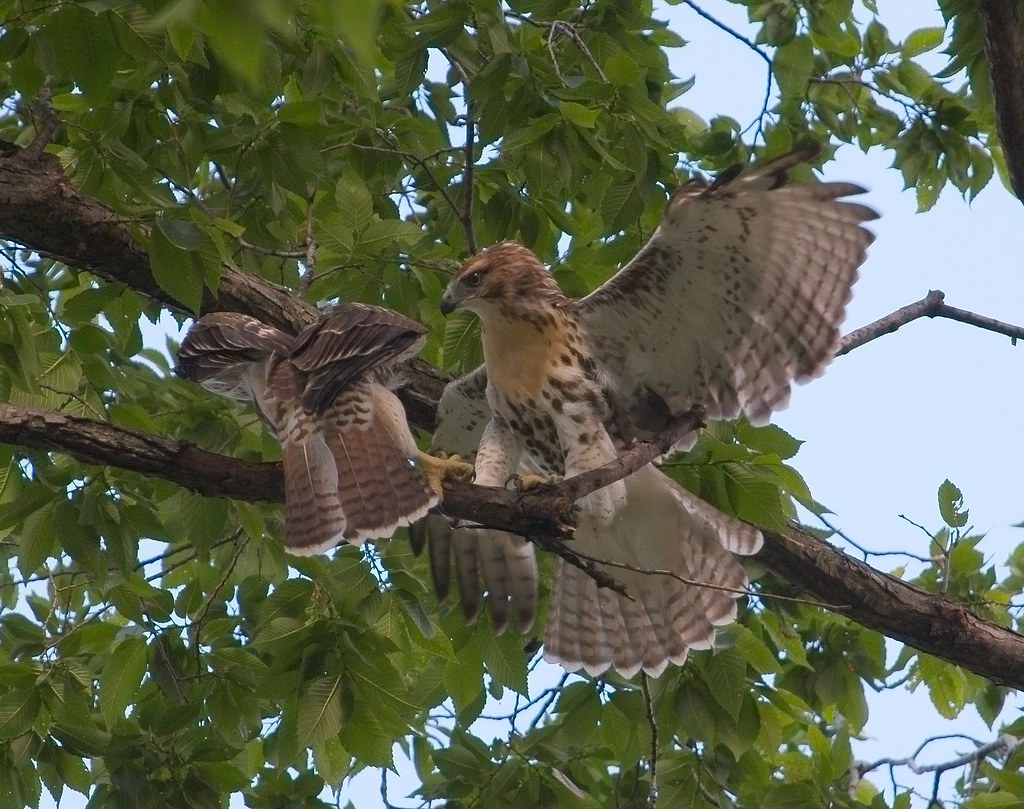 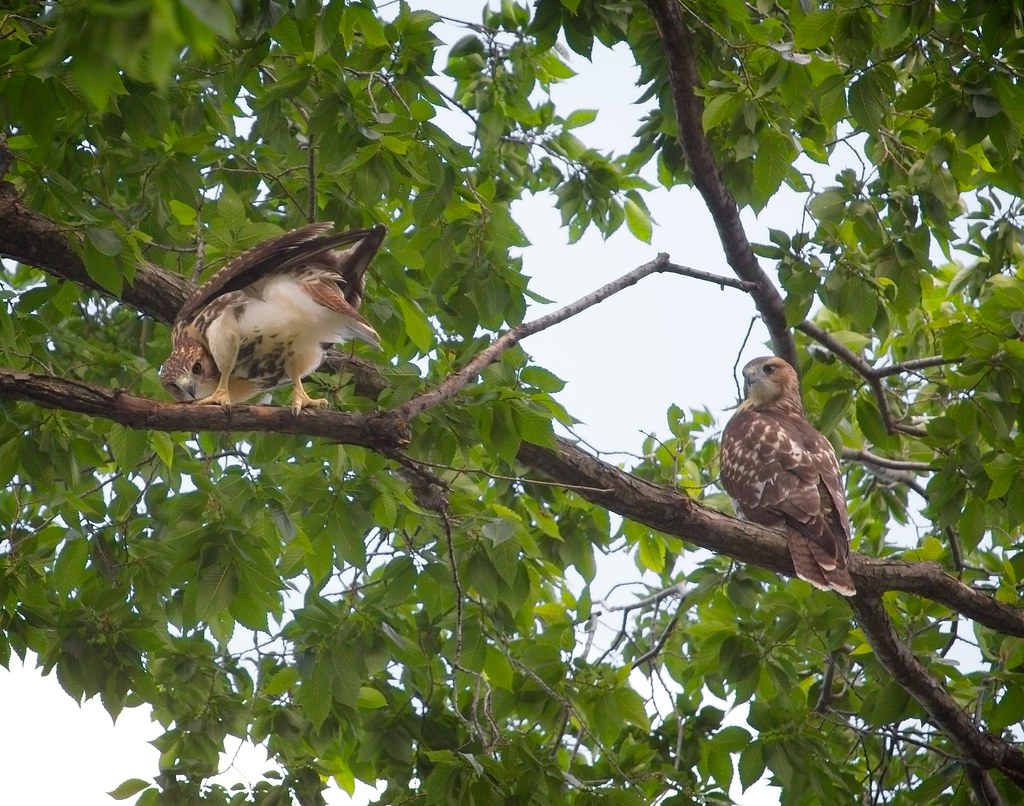 Ten fell asleep for a while in a sunbeam. 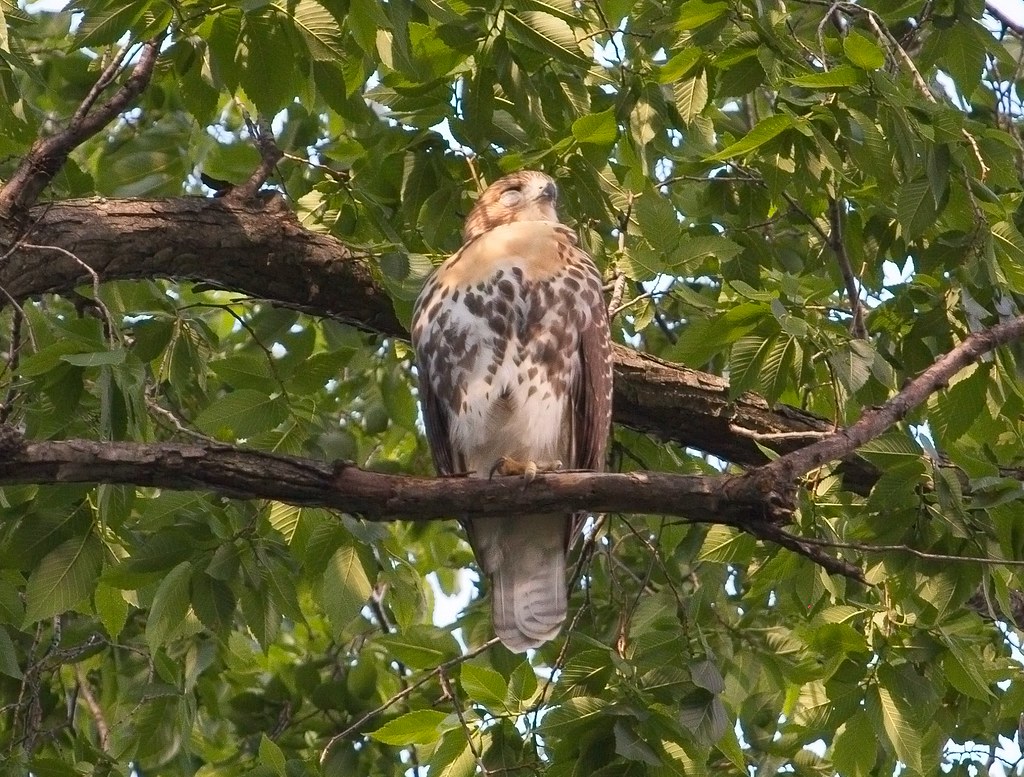 While she napped, Flatbush decided to check out the rooftop where Ten had been previously.  A blue jay immediately found him. 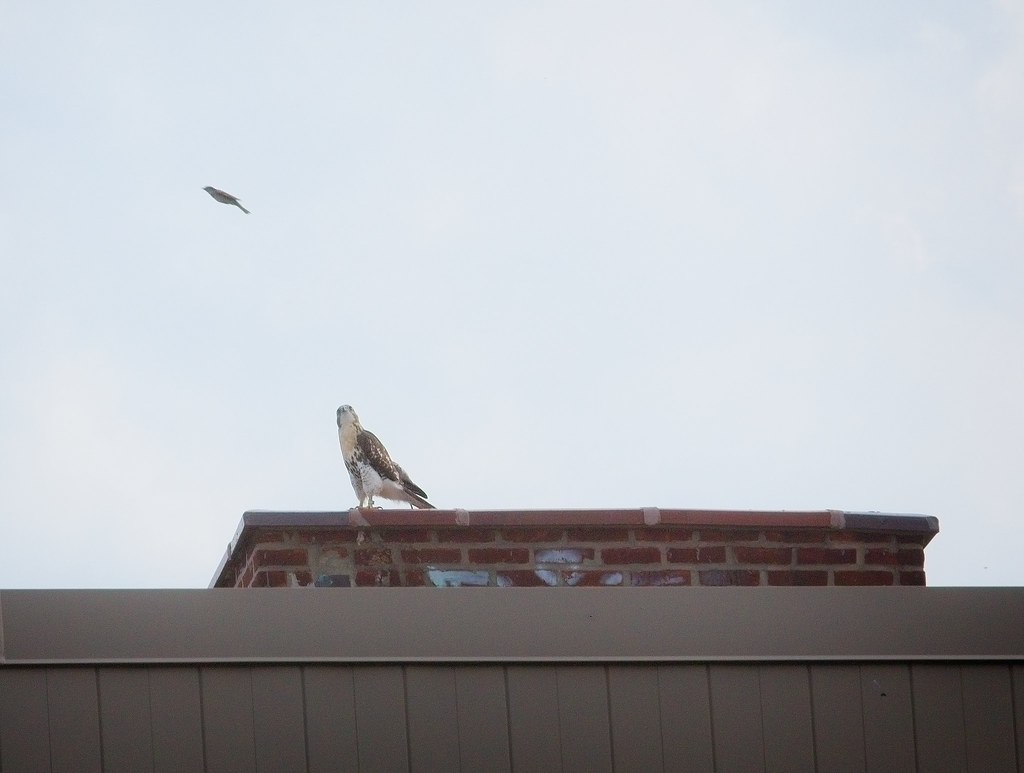 Prior to this, Flatbush had been in the same tree for about four days, so I was happy to see him actually flying.  Could he be copying what he saw Ten do?  I like to think he's learning from her. 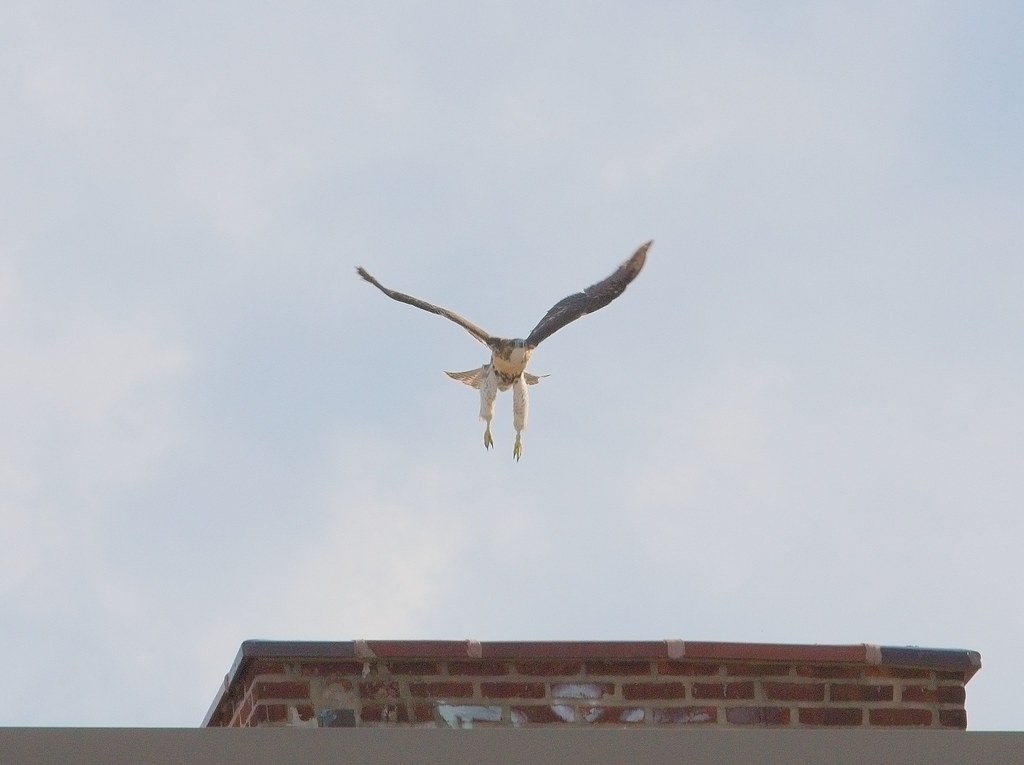 He made several more flights between trees that afternoon, finally displaying some confidence.

After her rest, Ten awoke to soak up the last bit of sun. 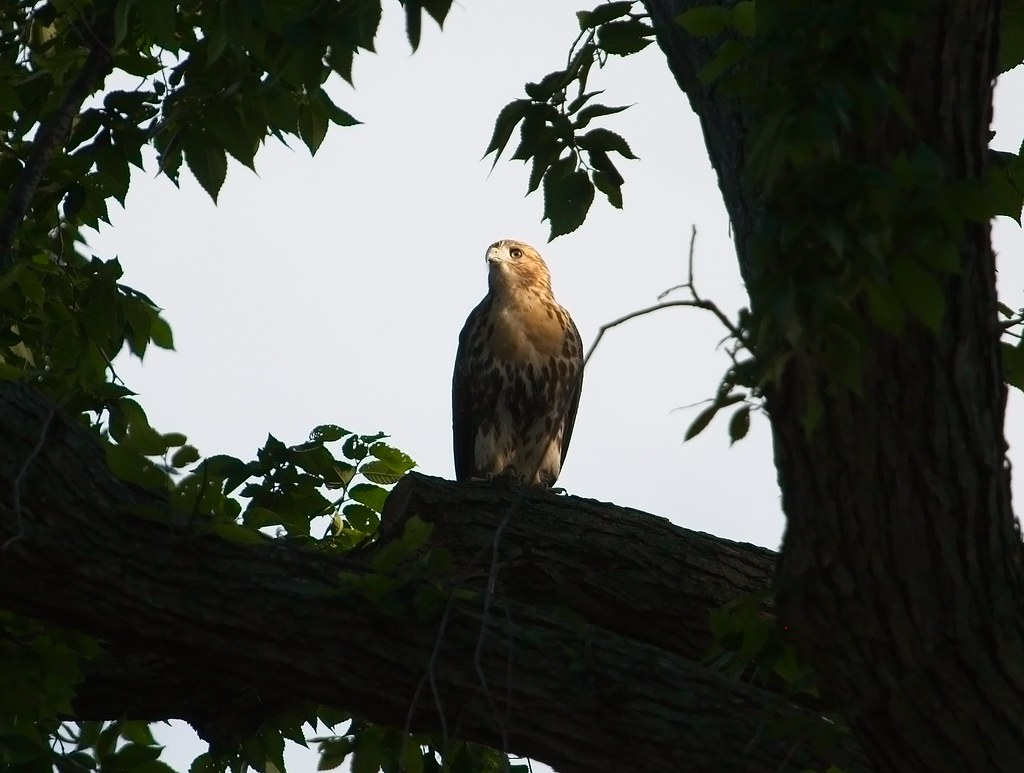 She then crept up on Flatbush, who was perched in the same tree.  In the photo below, Flatbush is on the upper branch and Ten peers up at him from the shadows. 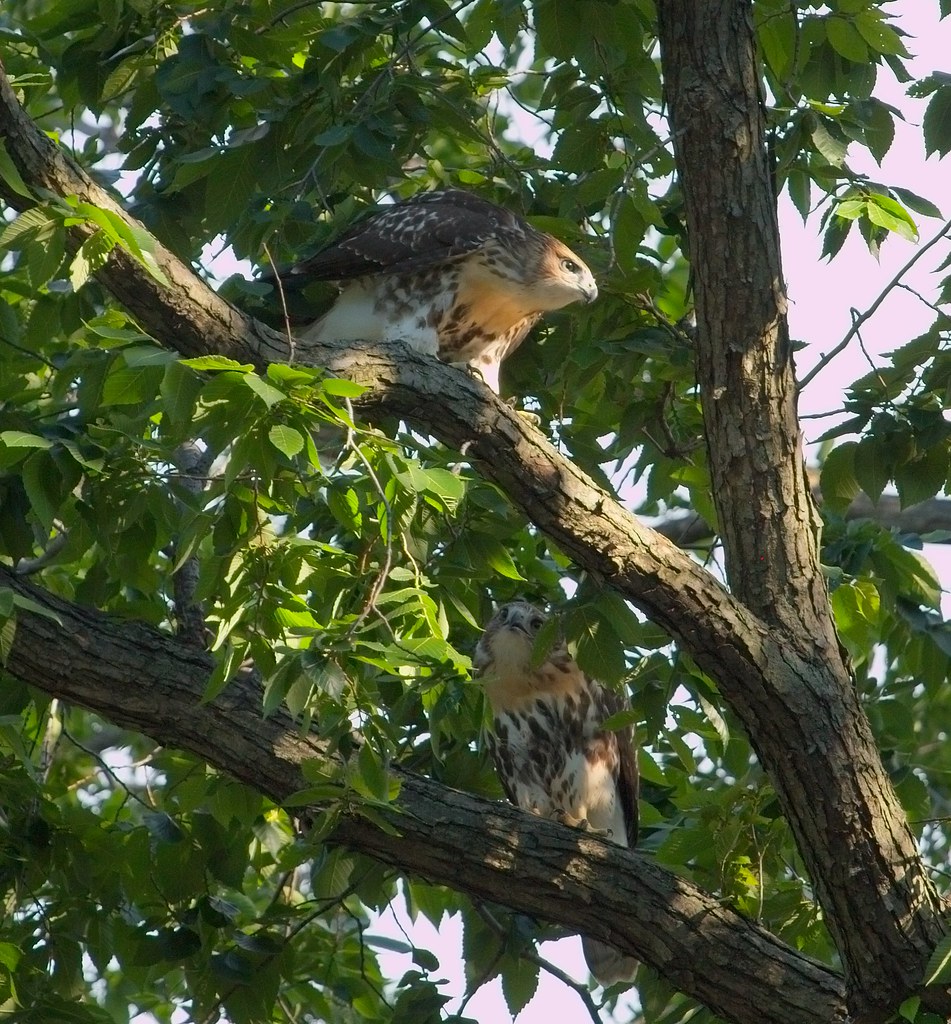 Over the last few days, the fledglings have been seen perching together.  When I left the park this evening, they were both up in the nest waiting for dinner to be delivered.  They seem to be getting along well.