Now that Tompkins Square red-tails, Christo and Amelia, are brooding eggs, there's not much activity to see as they spend most of their time taking turns hunkering down in the nest. This is a photo of Amelia taken yesterday: 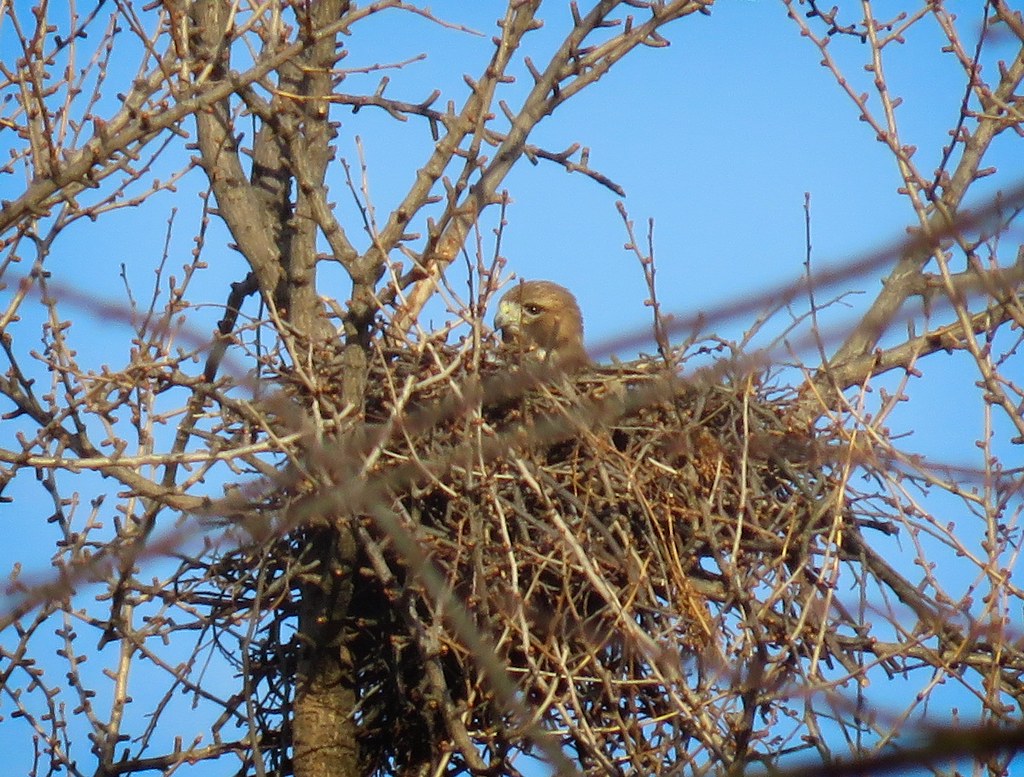 The nest this year sits slightly higher than the one last year, so it will be interesting to see if there is a view of it at all once the leaves grow in on the tree.

I took the photos below two days before Amelia settled in to begin brooding. Amelia is on the left and Christo is on the right. Note their size difference (she's larger) and coloring (he has a lighter head with a mostly white throat). 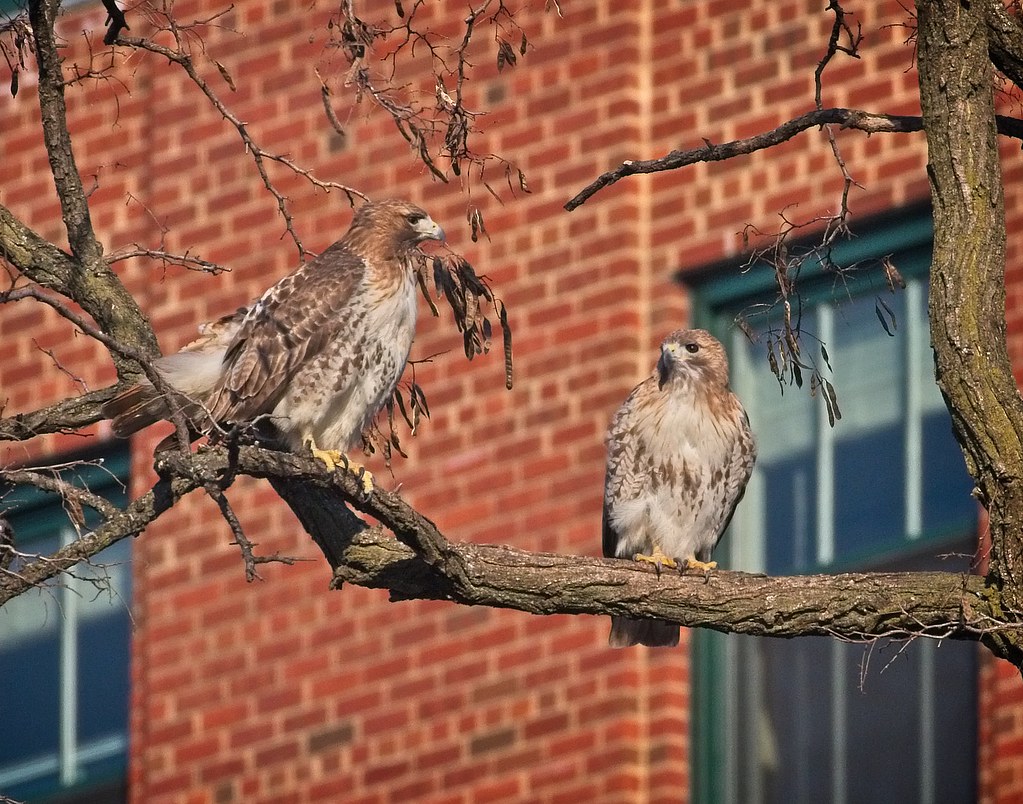 When you see them in this position, it's easy to tell who is who! 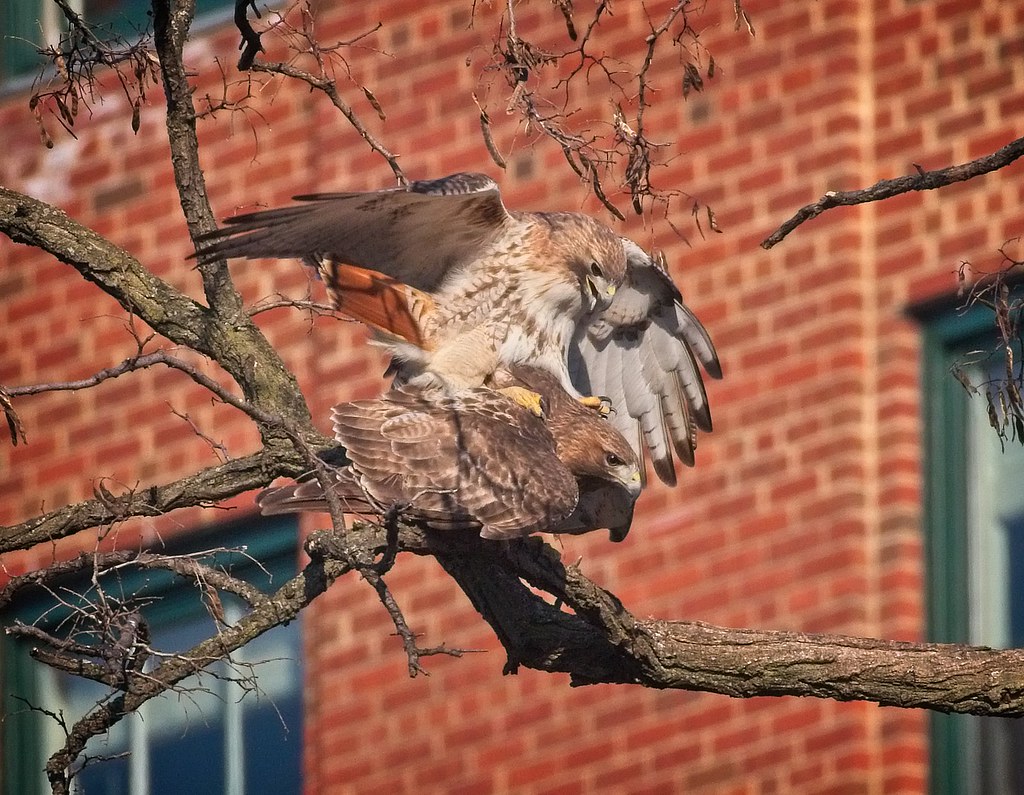 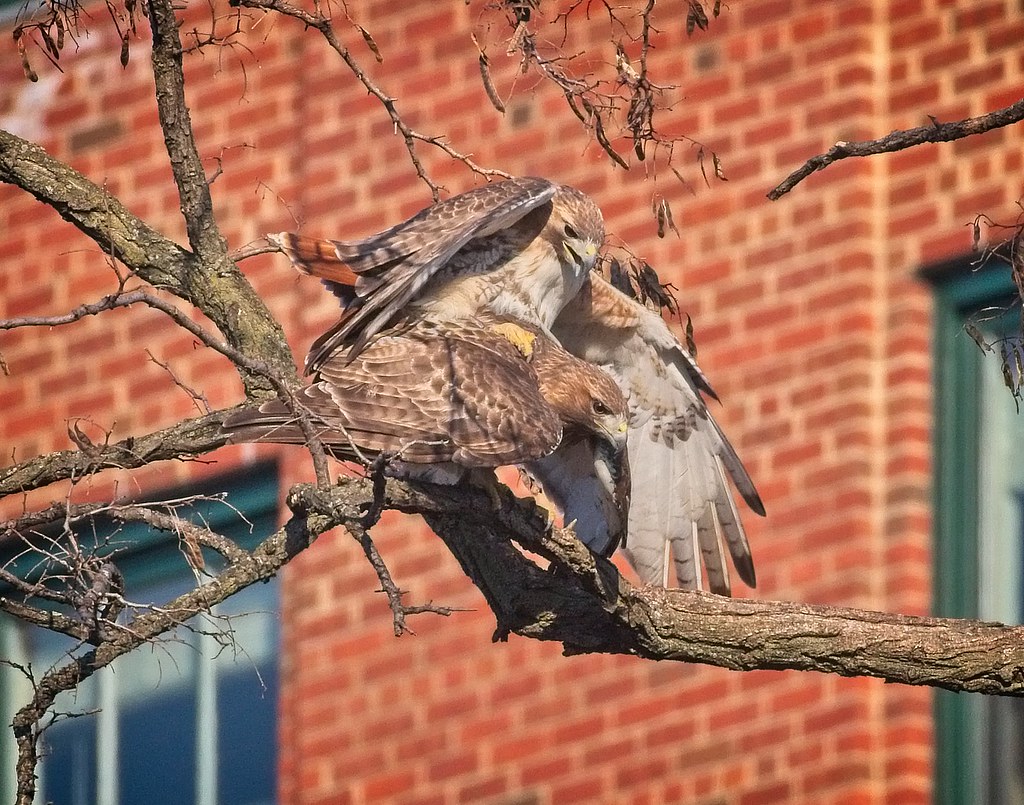 Afterwards, Christo soars past his namesake, the Christodora building. 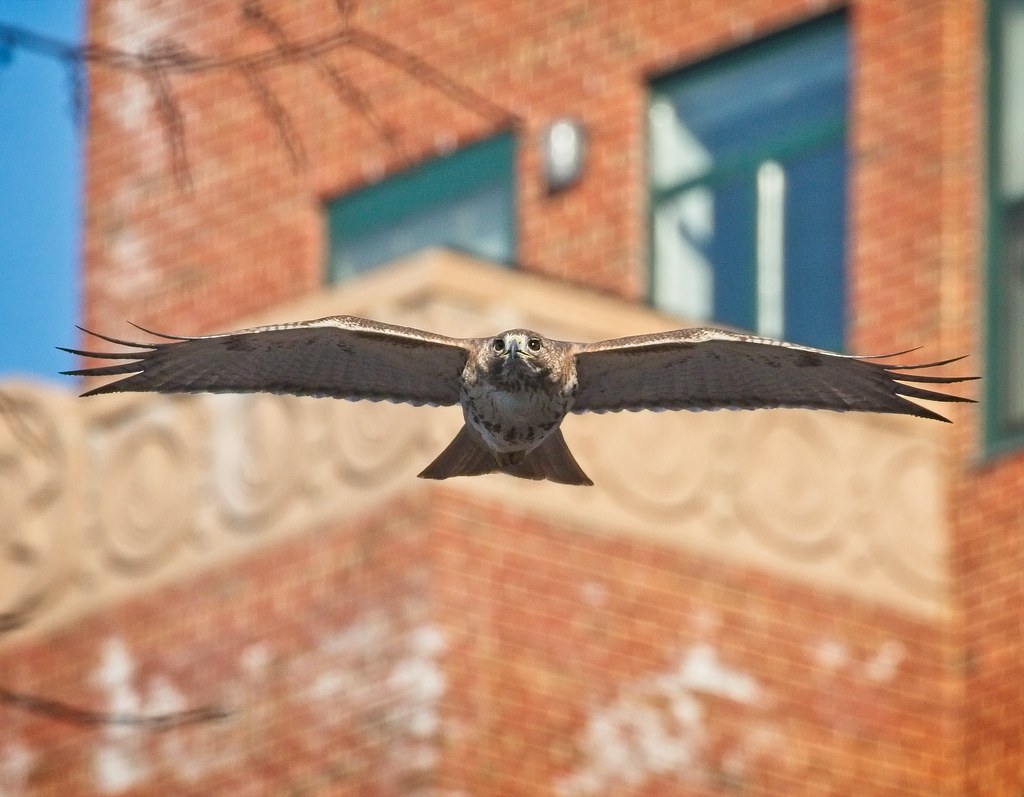 While Amelia spends most of her time on the nest, Christo brings her food, like this fresh rat. 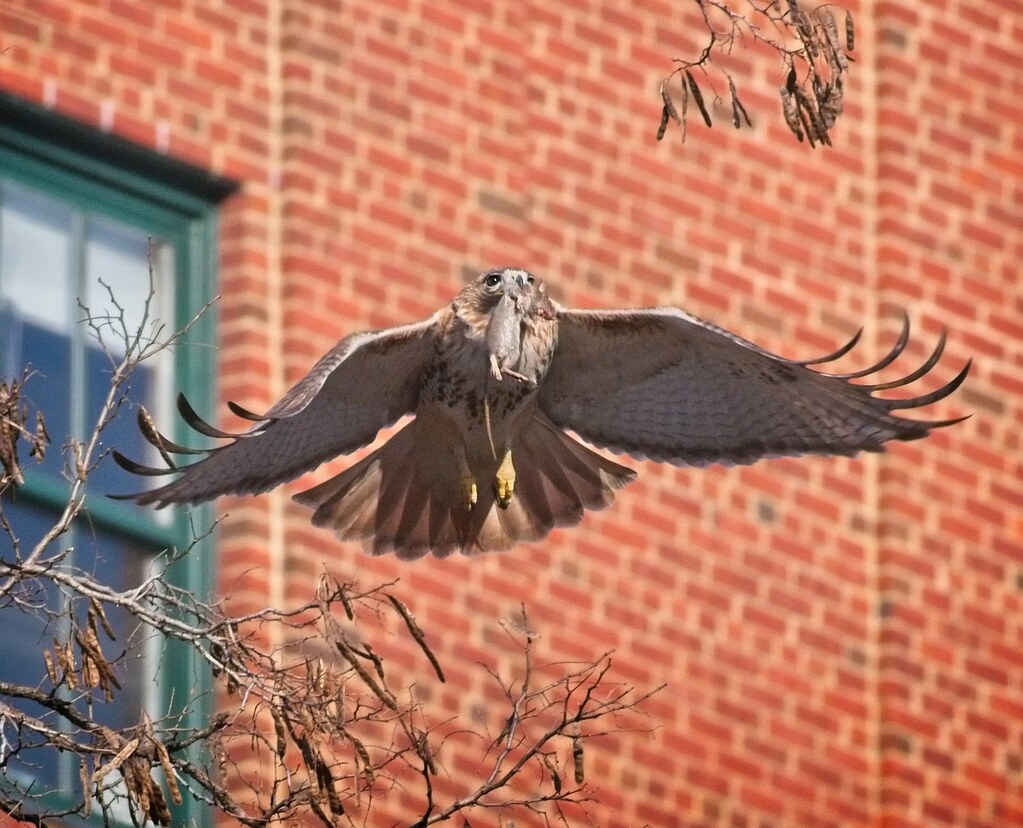 Amelia takes one last stick to the nest. 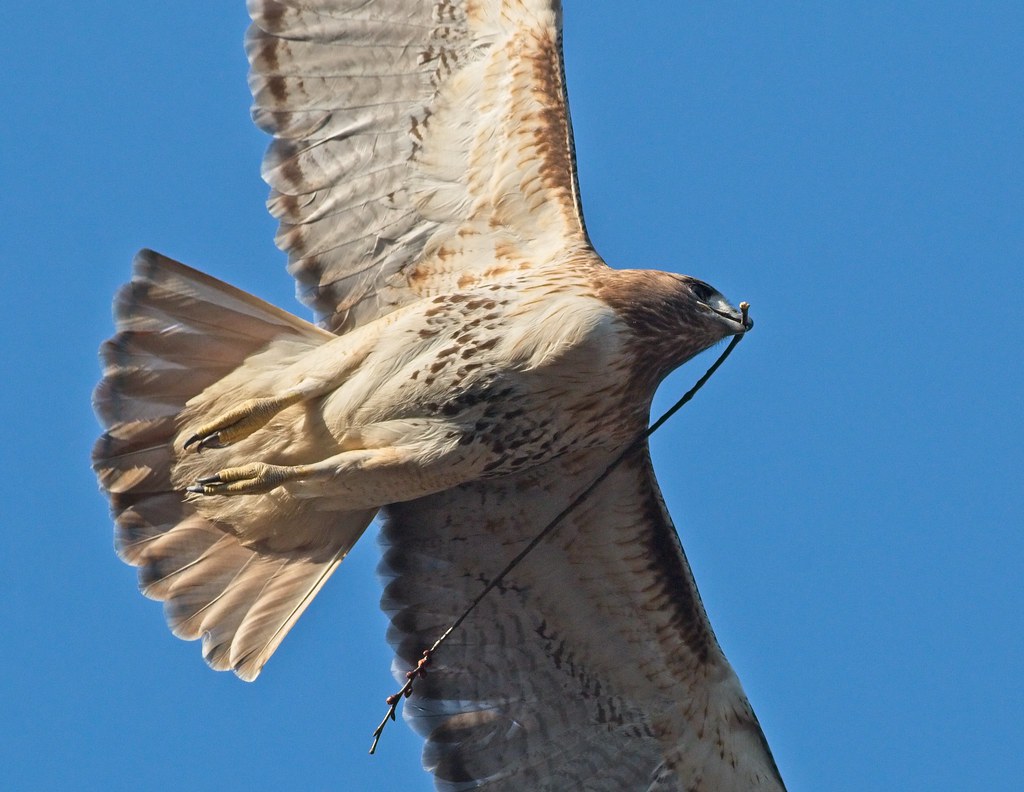 Amelia sits in the nest, which looks more compact and denser than last year's model. 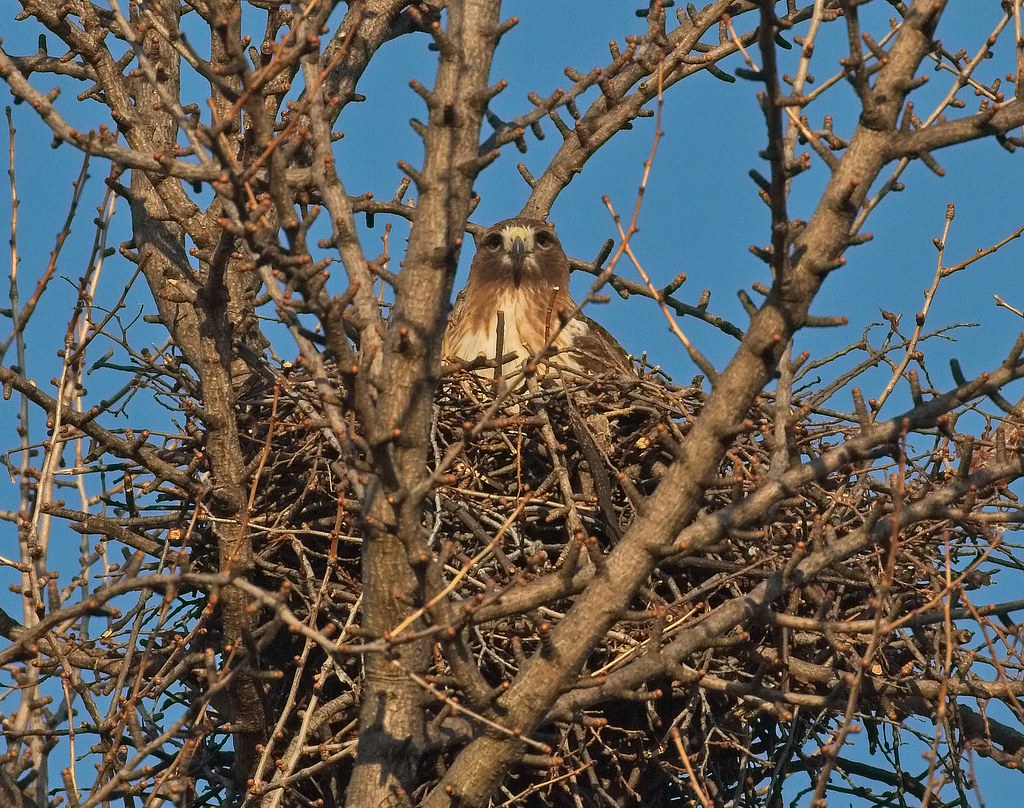 Christo gathers bark to line the nest.  This time, he takes it from an American Elm (he also favors Japanese Scholar trees). Note the bare branch beneath him - he's picked this one clean. 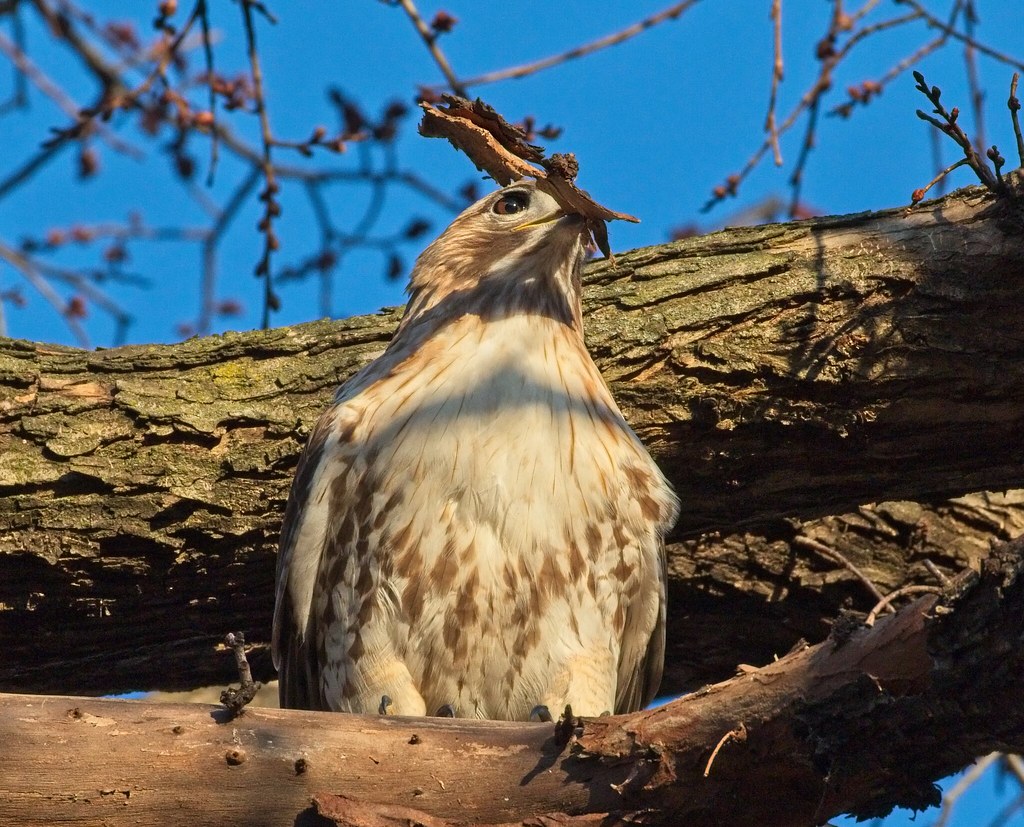 Christo on the nest: 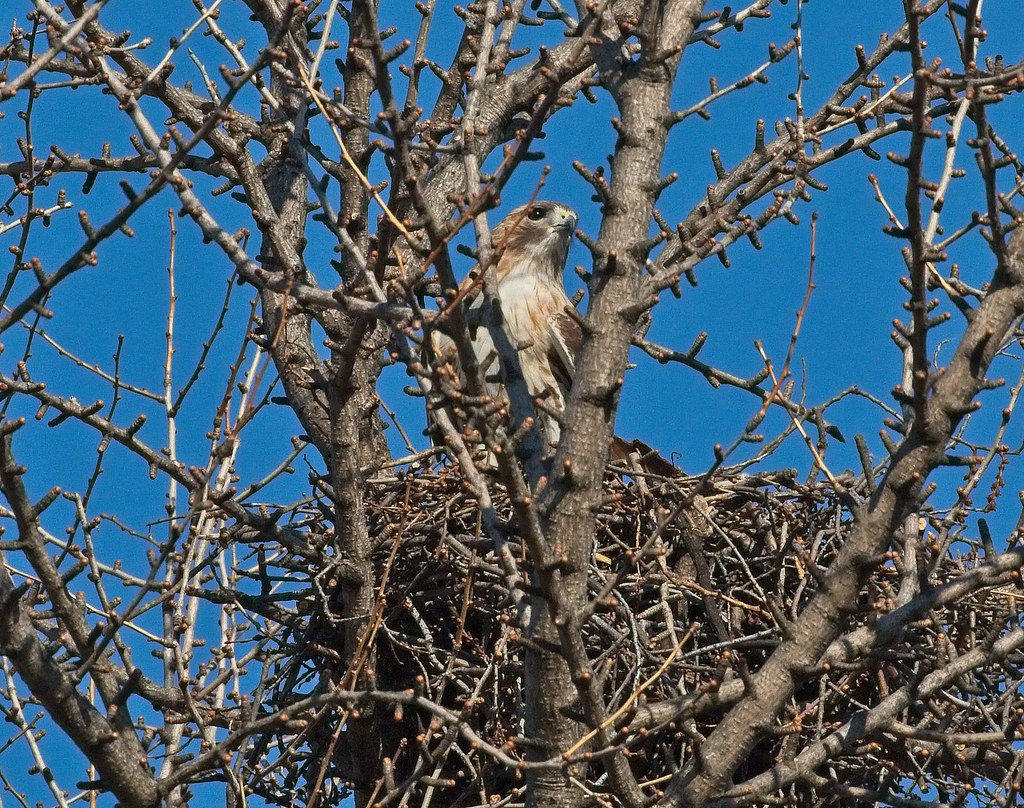 Just before sunset (before egg-laying time), Christo and Amelia perched on the dome of Most Holy Redeemer church on E 3rd Street. Christo is hunching down on the left, so he looks extremely small compared to Amelia. 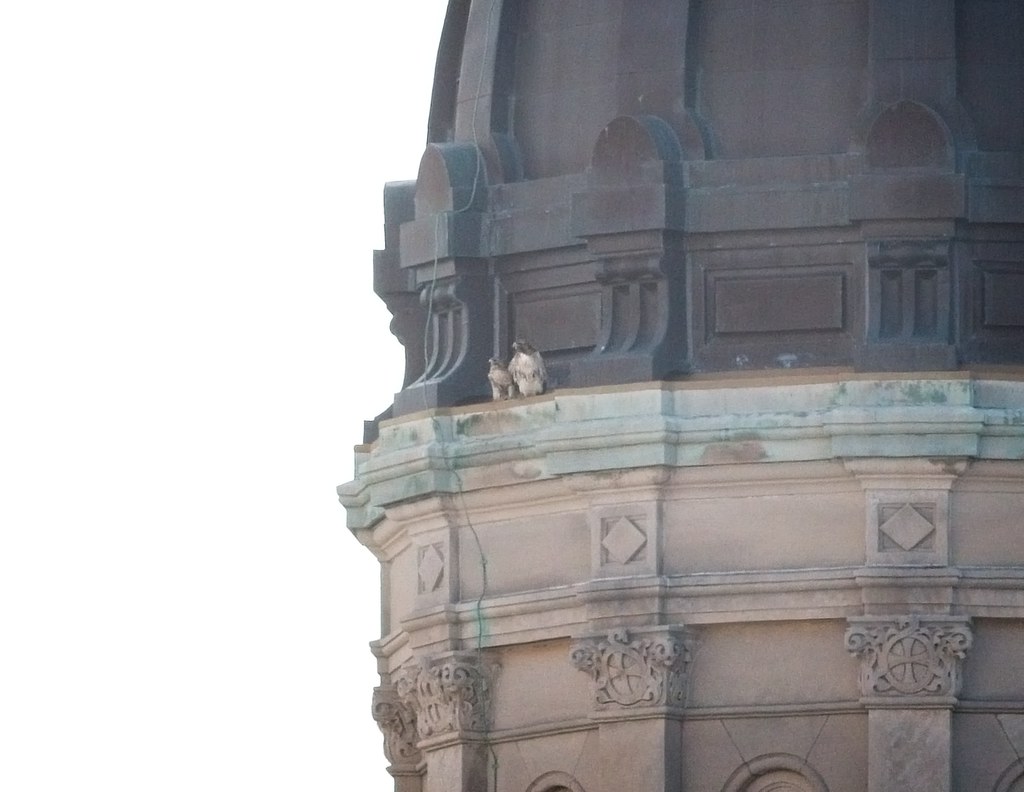 Christo may have been hunching down because an immature red-tail flew right up to the pair and tried to brazenly land on the ledge right next to them. 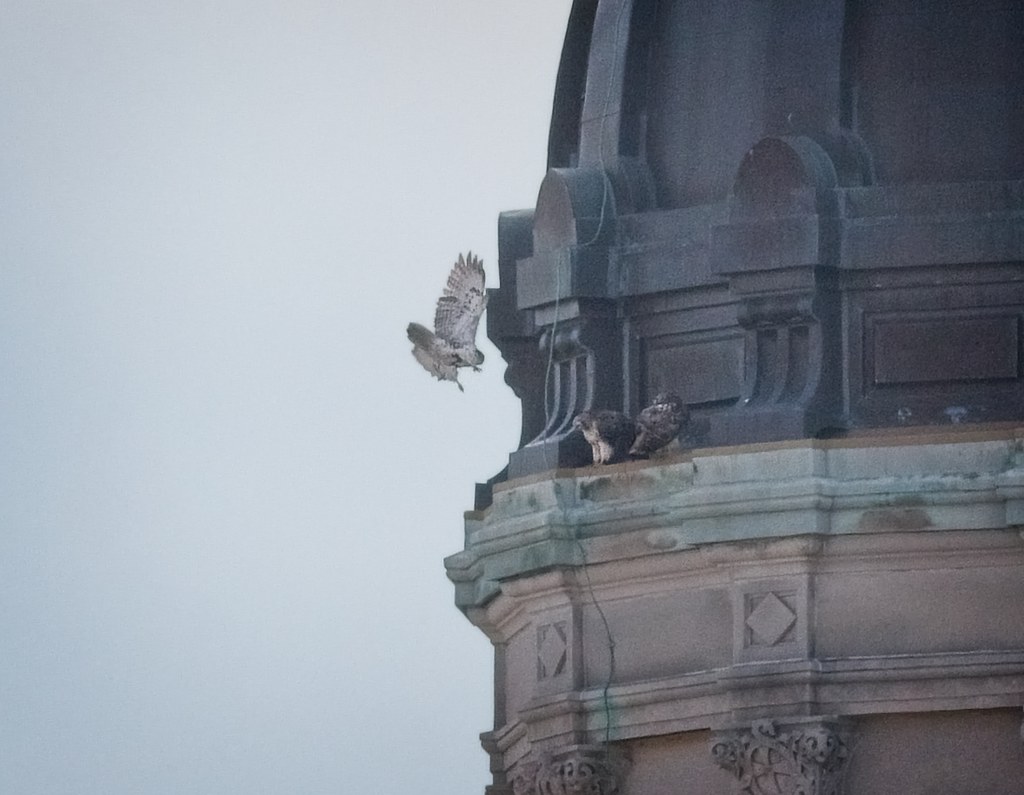 Christo was not having it and dove after the intruder while Amelia remained on the ledge. 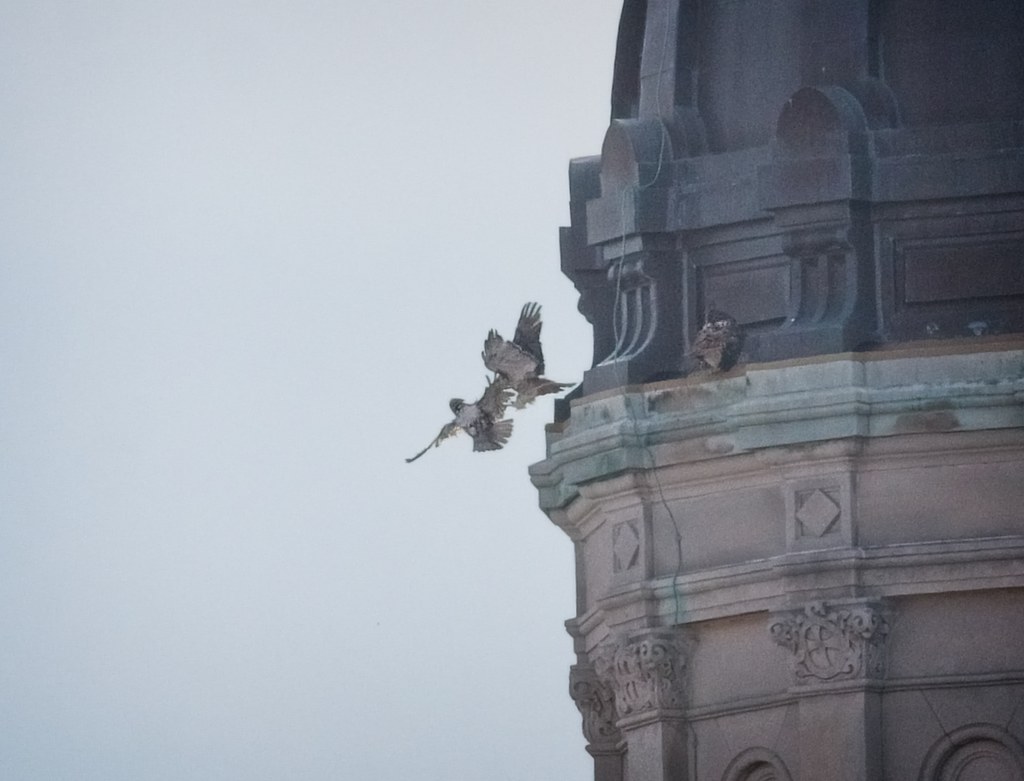 The hawks tumbled in the air several feet before the younger one flew off. 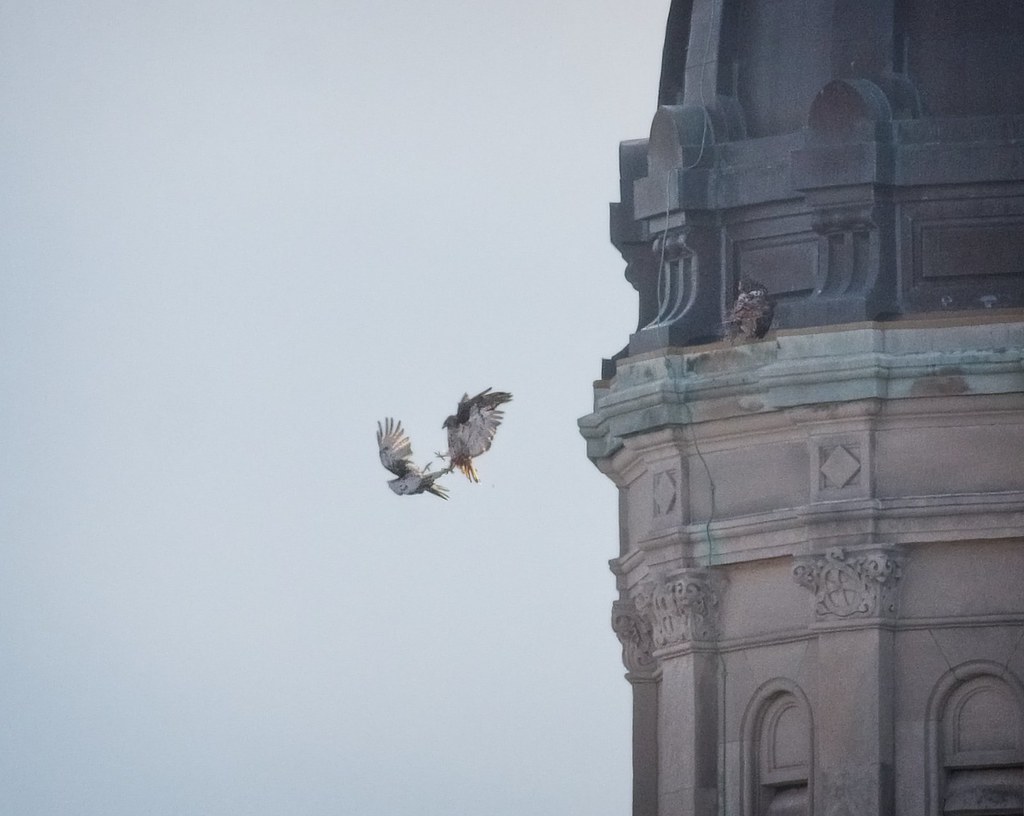 Victorious, Christo returned to the ledge for one more round of mating before nightfall. 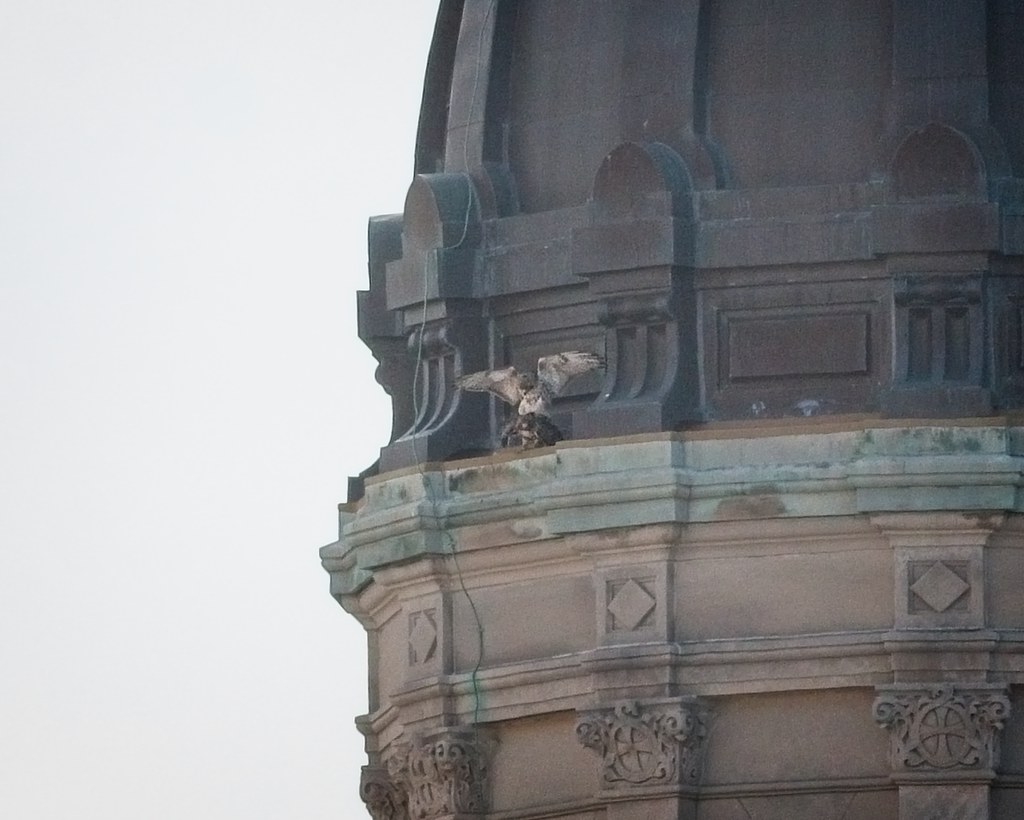 We can expect hatching around the end of April. The nest is too high to see newborn chicks, but we should be able to tell that something has happened when the parents start bringing food to the nest.