As promised in my last post, we are focusing on Dora today.  Most of the attention usually goes to Christo because he tends to be closer to the ground and people at any given time.  Dora is not as tolerant or trusting, and prefers to keep her distance.  So, it was a real treat to spend quite a bit of time with her over the last few days.

On Sunday, she perched on the cellphone transmitter on Avenue A and St Mark's.  I've seen her up there several times before, and it's a popular pigeon hangout. 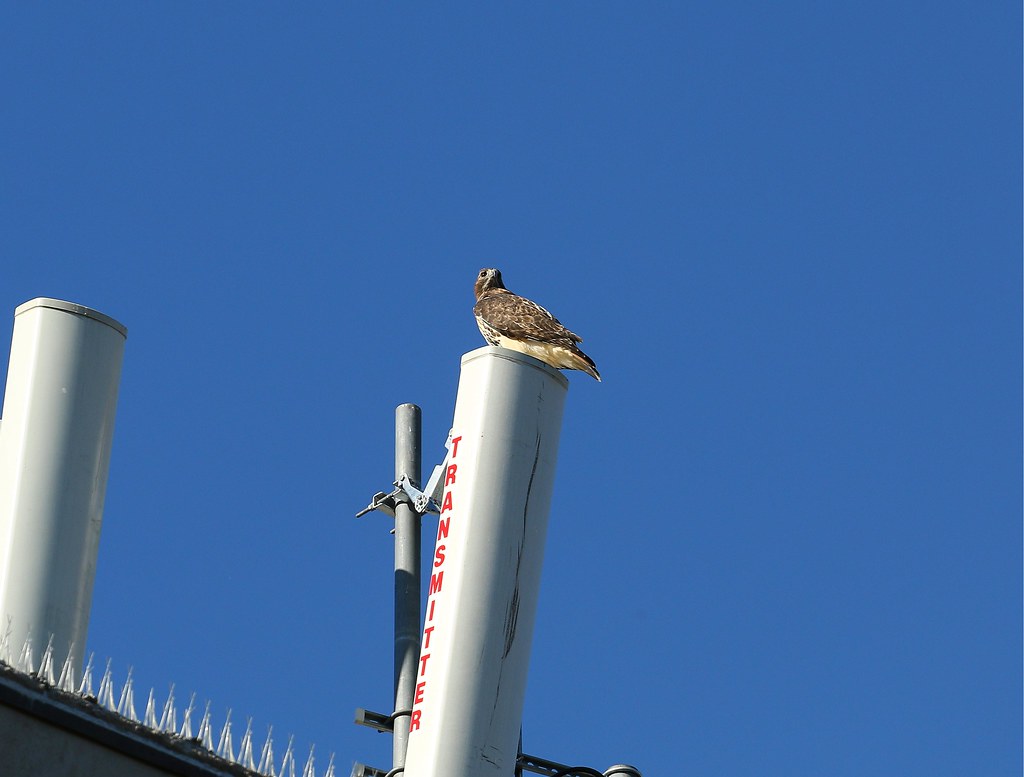 One of her identifying marks (or non-marks) is her plainly colored legs.  Below, you can see her legs are a solid cream color, whereas Christo has brown barring on his legs.  It's one feature we use to tell them apart.  Dora also has a dark head that is nearly the same color as her wings.  Christo's head is a lighter golden brown. 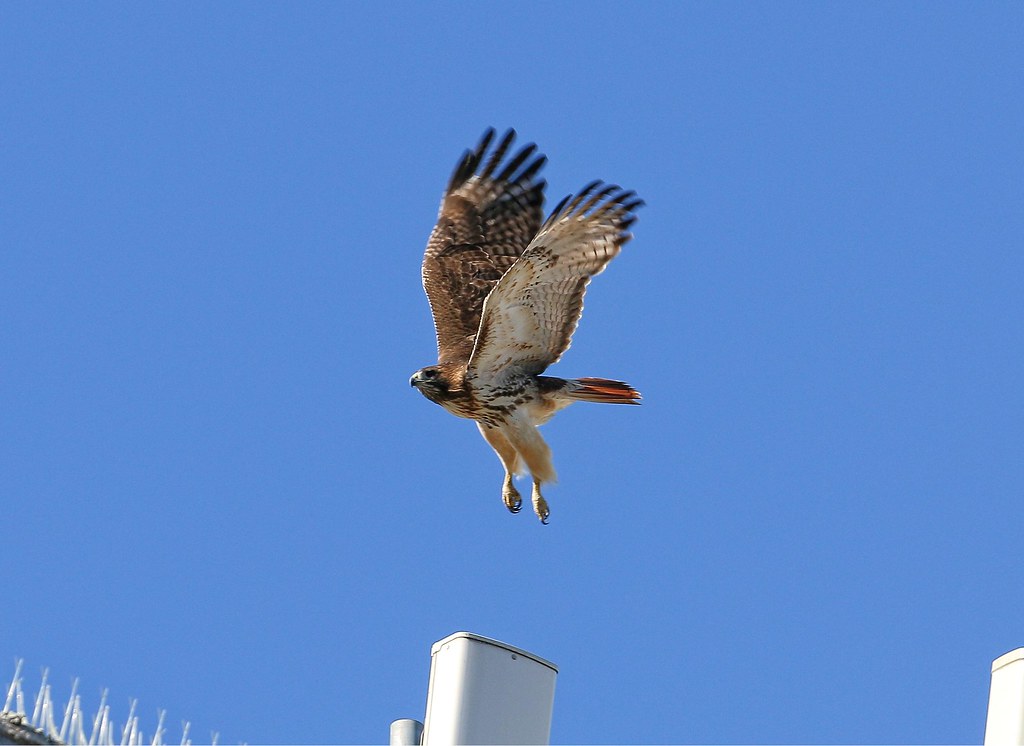 Around noon on Monday, I happened to glimpse Dora relaxing atop one of the Village View buildings at First Avenue and 6th Street.  If you look closely, you can see a kestrel perched on the pole on the far right. From this distance, it looks like a tiny round blob.  Seconds before, I'd seen the kestrel sneak up behind Dora and slam into her back.  She almost fell off the railing.

Moments later, when Dora's head was turned, the kestrel made another aggressive move.

The kestrel took several swipes at the hawk before flying east.  In the photo below, the markings are visible enough to tell us the kestrel is female.

Presumably fed up with being bullied, Dora took off and went to Tompkins Square where she perched out in the open near the Temperance fountain. 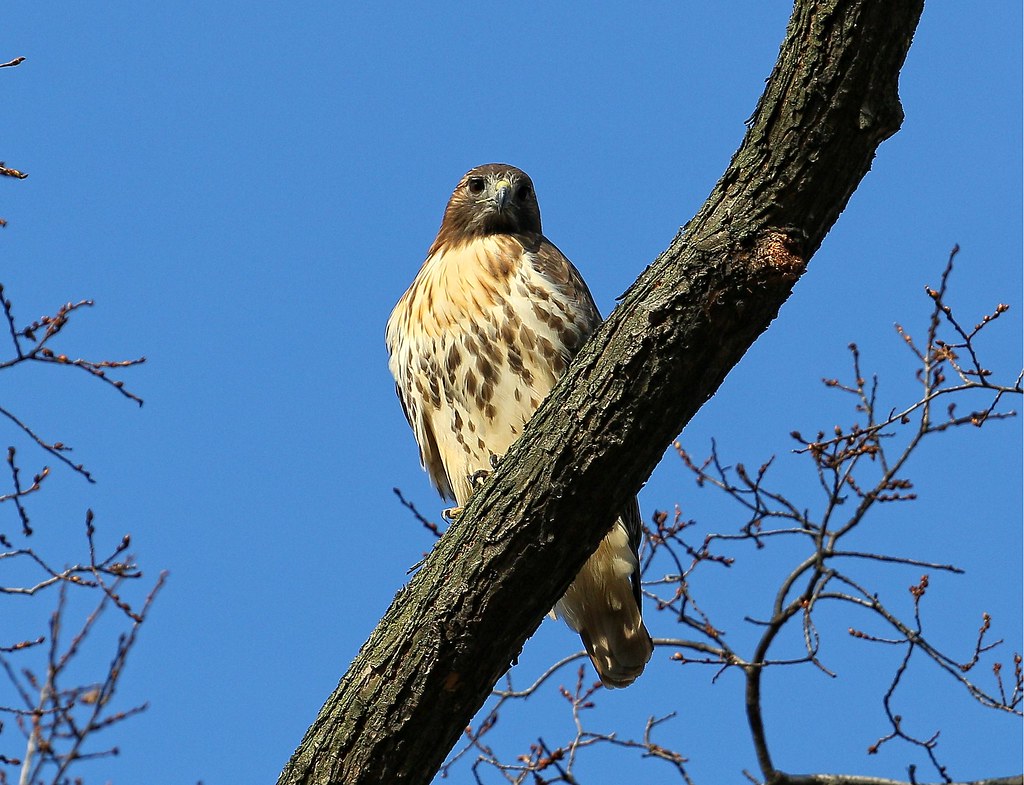 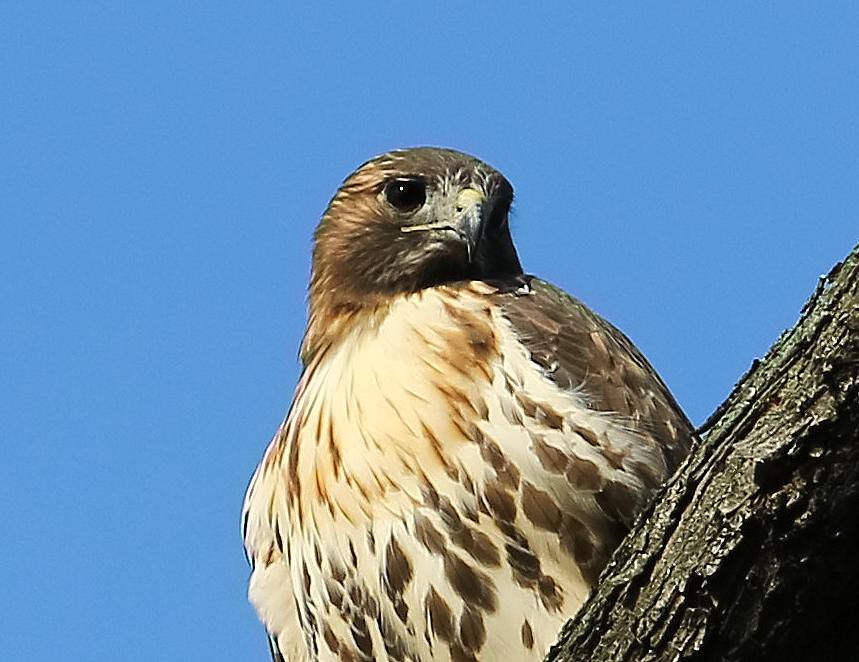 While she sat there watching a worker sweep the path below her, someone pointed out that Christo was nearby eating a pigeon.  Dora was apparently waiting for leftovers.

After Christo was done eating, he left the remainder of the meal on a branch for Dora to retrieve.  However, I don't think she liked his choice of drop-off location.  It was on a very low branch that overhangs the path and some benches, about ten feet off the ground.  Christo had no problem eating his lunch there, but I think it was too close to people for Dora to feel comfortable.

She made an attempt to fly down and grab the food... 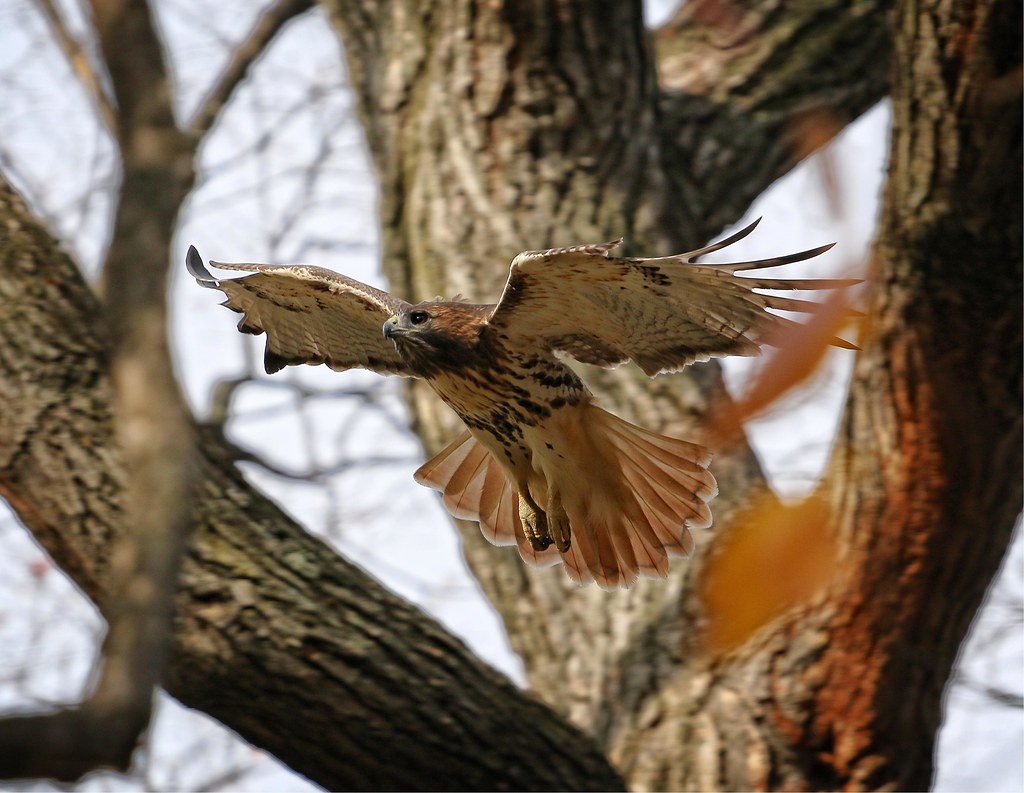 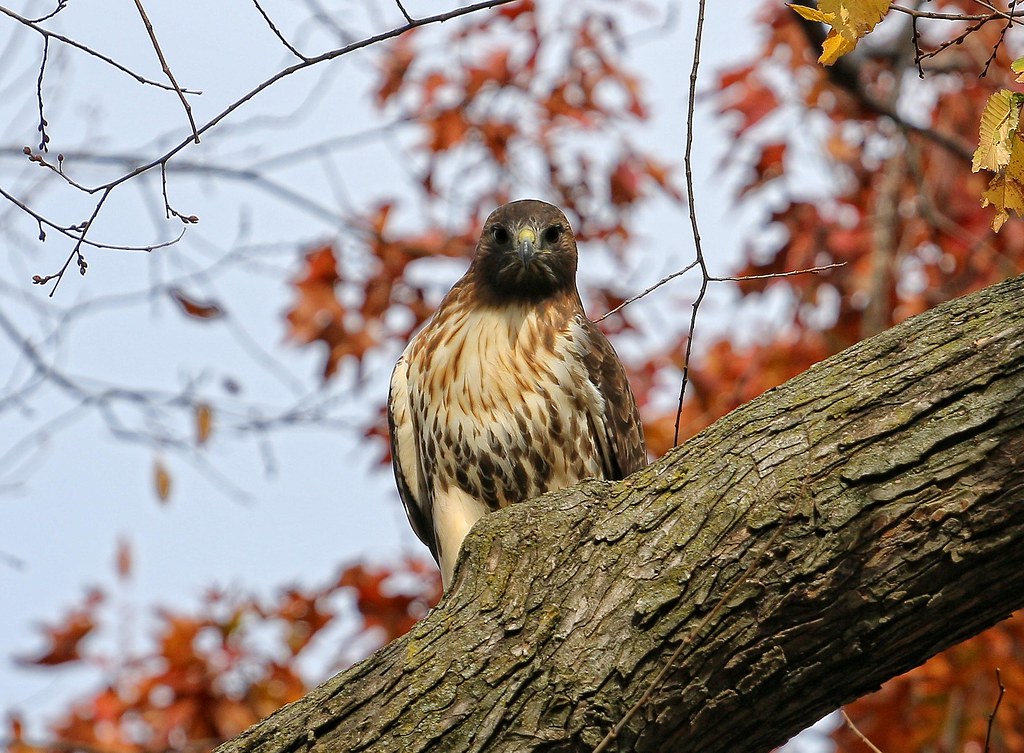 She made two more attempts to fly over the branch and grab the pigeon. 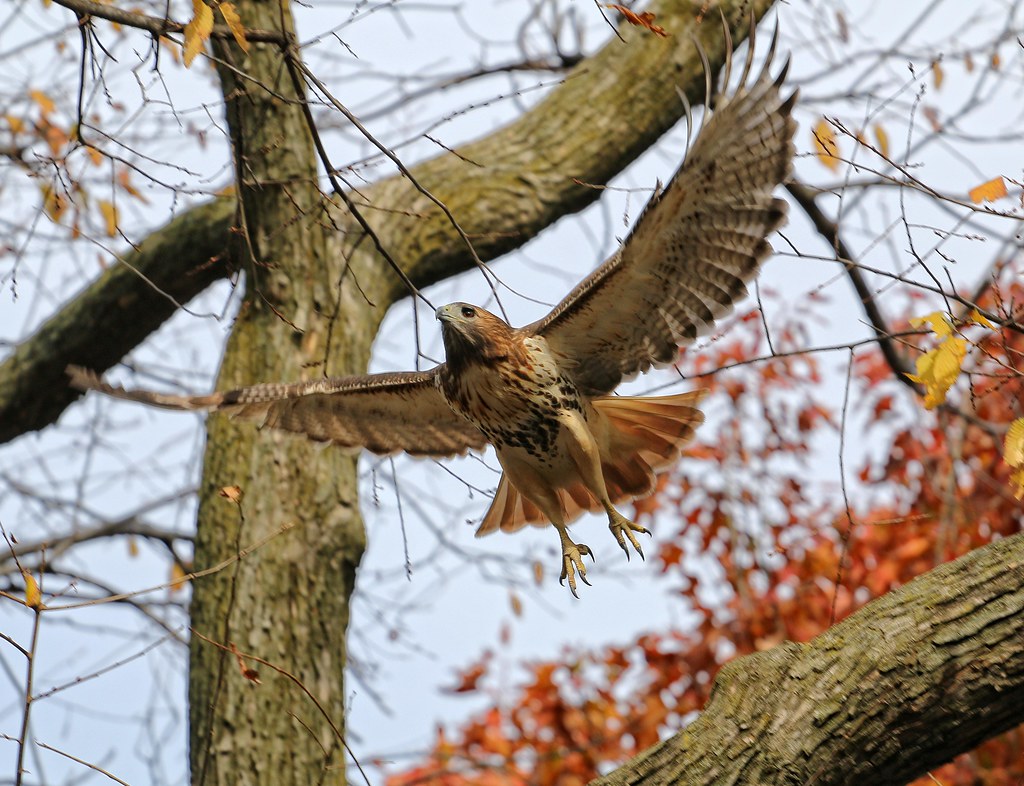 Finally, she caught it and took it to a much higher perch in a nearby tree.  You can see the red pigeon foot sticking out from her right talon. 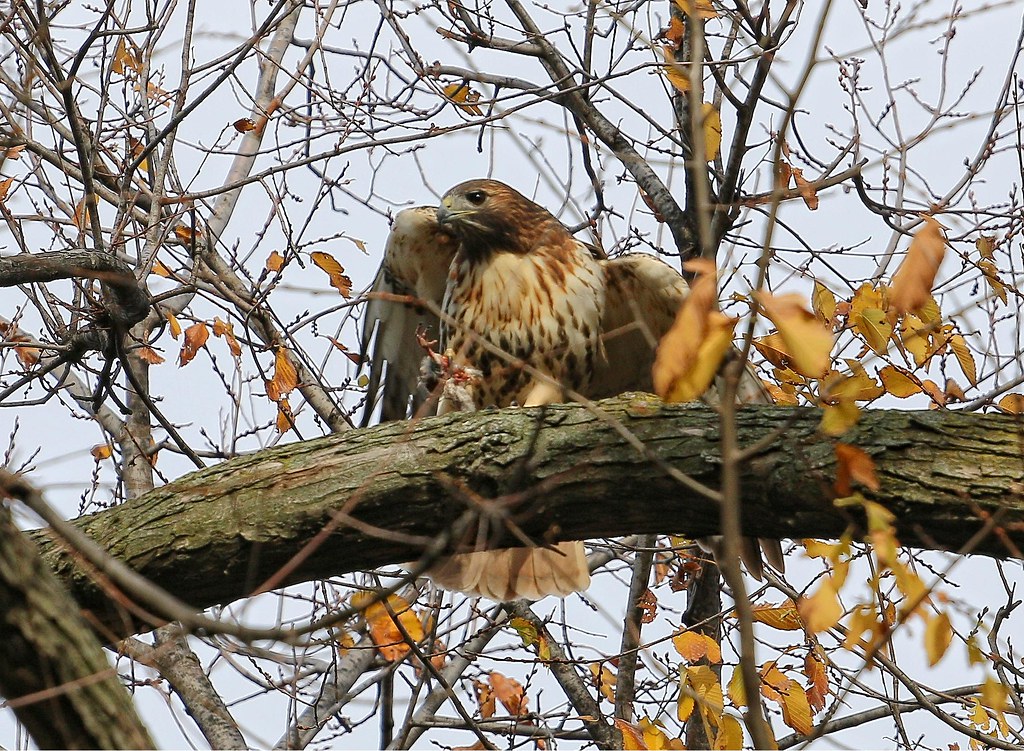 She ate the snack in just a few minutes and seemed a bit restless.  Rather than resting and digesting her meal, she hopped from branch to branch, her attention on something south of the park. 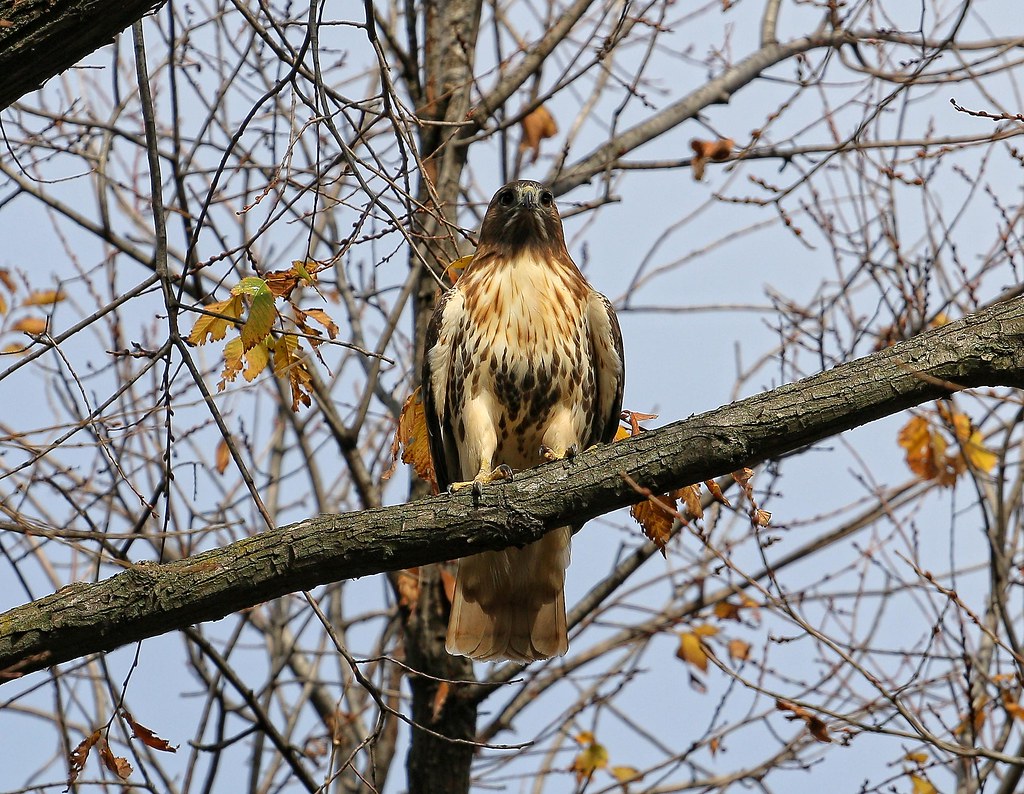 Finally, Dora took off and headed out of the park. 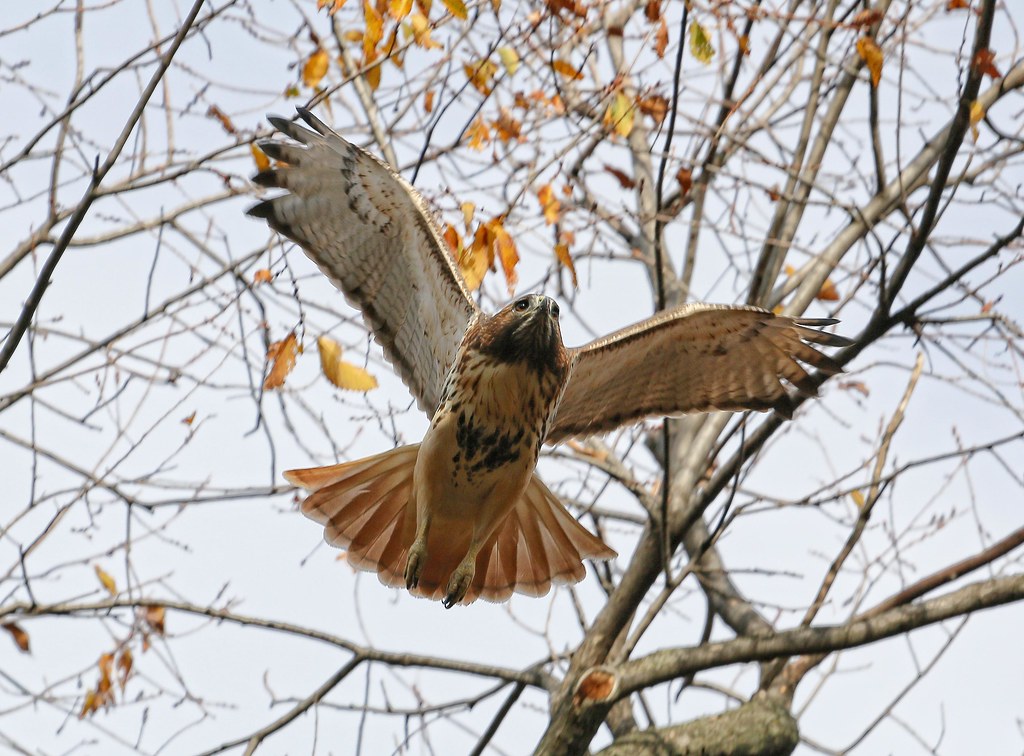 I didn't see her again until about 4:45, when the sun went down.  She was perched on a Village View building at Avenue A and 5th Street, where she was again being attacked by a kestrel. 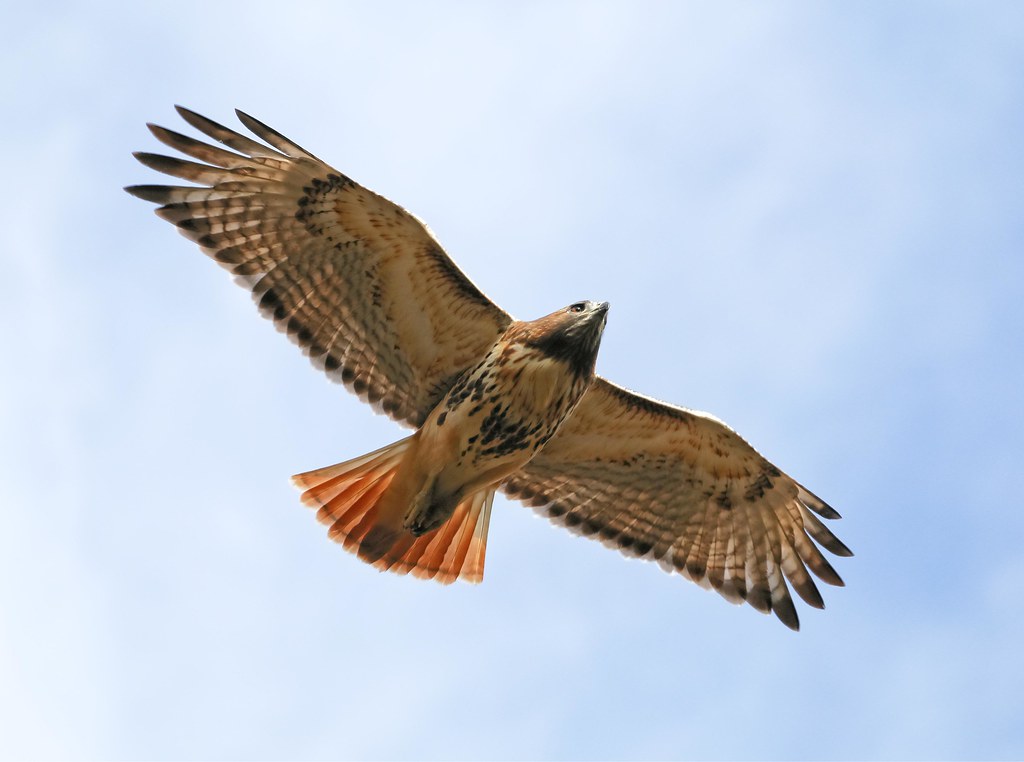 This is not the first (or last) time we've seen the hawks harassed by kestrels. It happens quite a lot as both are territorial and kestrels are little firecrackers.  Roger Paw caught a hawk-kestrel scuffle in the area in 2014.

More to come...
Posted by Laura Goggin Photography at 7:30 PM