While most of America was thawing turkeys last week, Christo the hawk grabbed himself a fresh butterball pigeon in Tompkins Square. 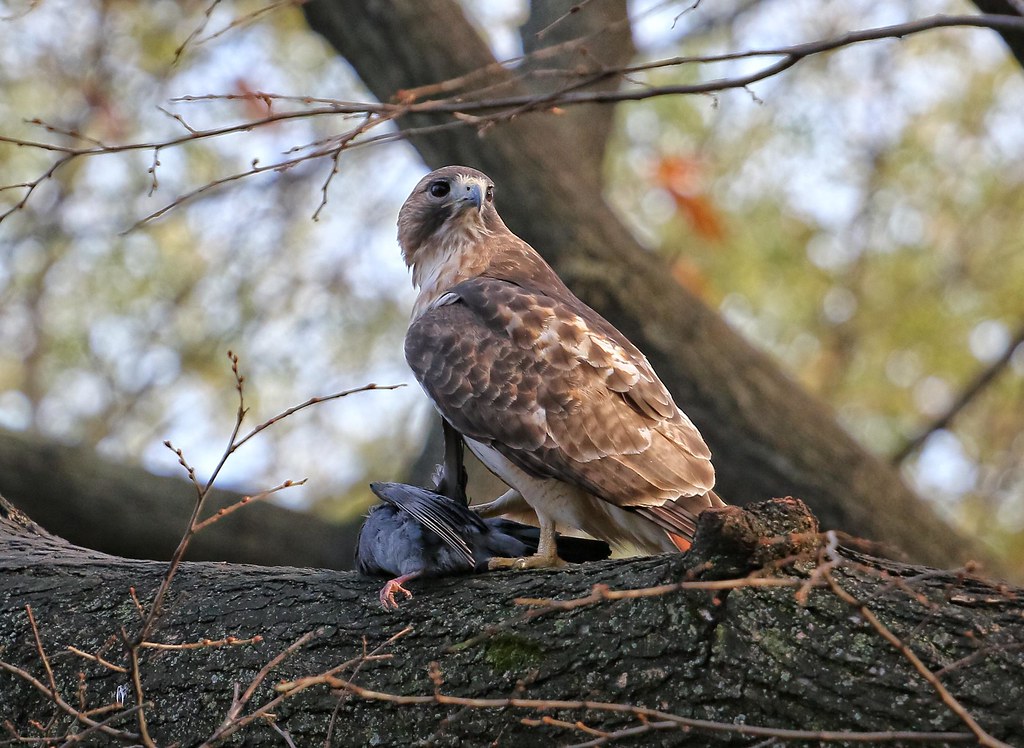 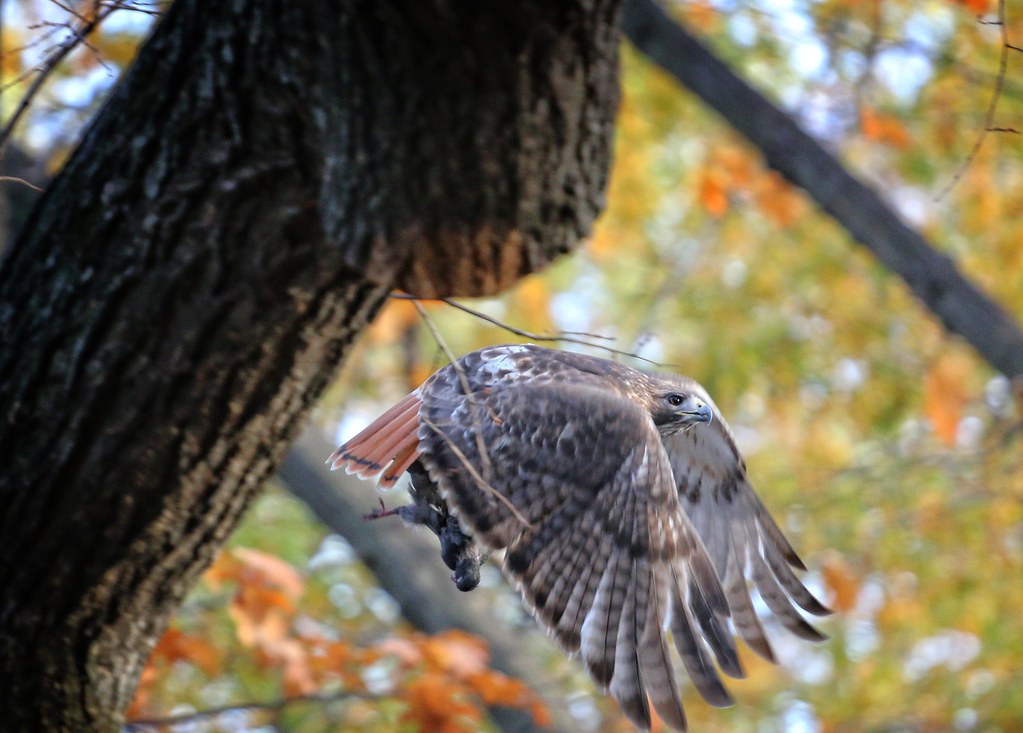 Thanksgiving day was dark and dreary, making it extremely difficult for me to photograph anything.  As luck would have it, I encountered three hawks (in addition to Christo and Dora) that day, so I really wanted to document them.  All the photos below have been lightened quite a bit in order to see the birds.

This large juvenile red-tail was perched down on East Broadway. 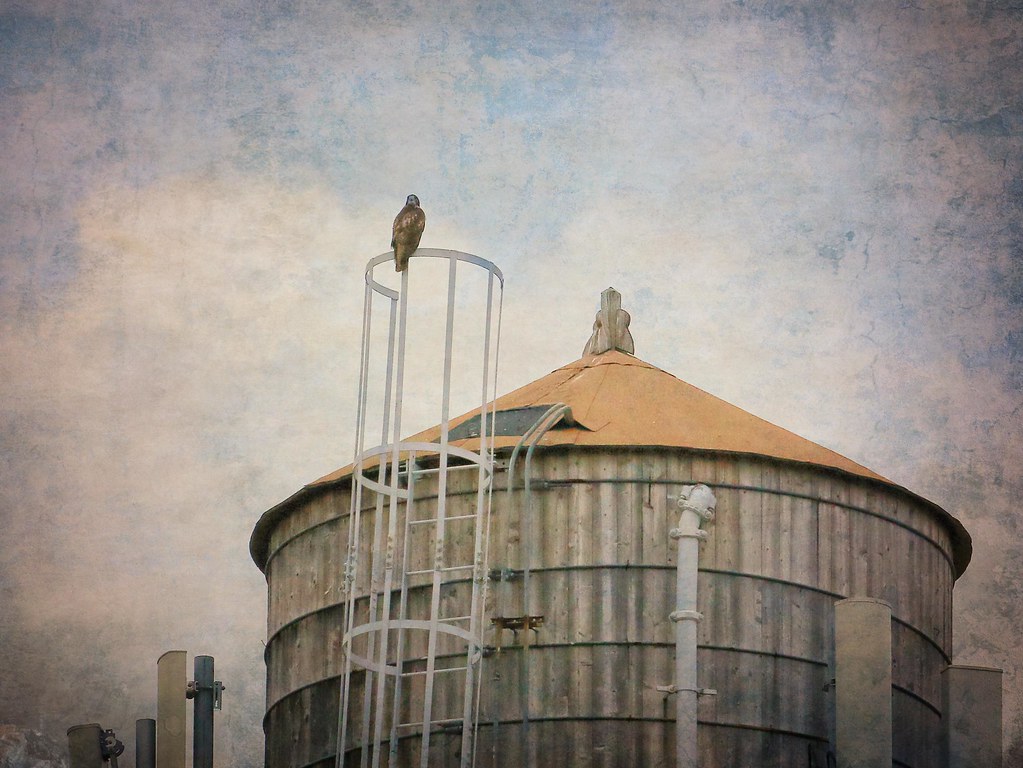 Half a block away, another (smaller) juvenile red-tail perched in a tree.  I'd seen it a few seconds earlier being mobbed by crows near the Seward Park library. 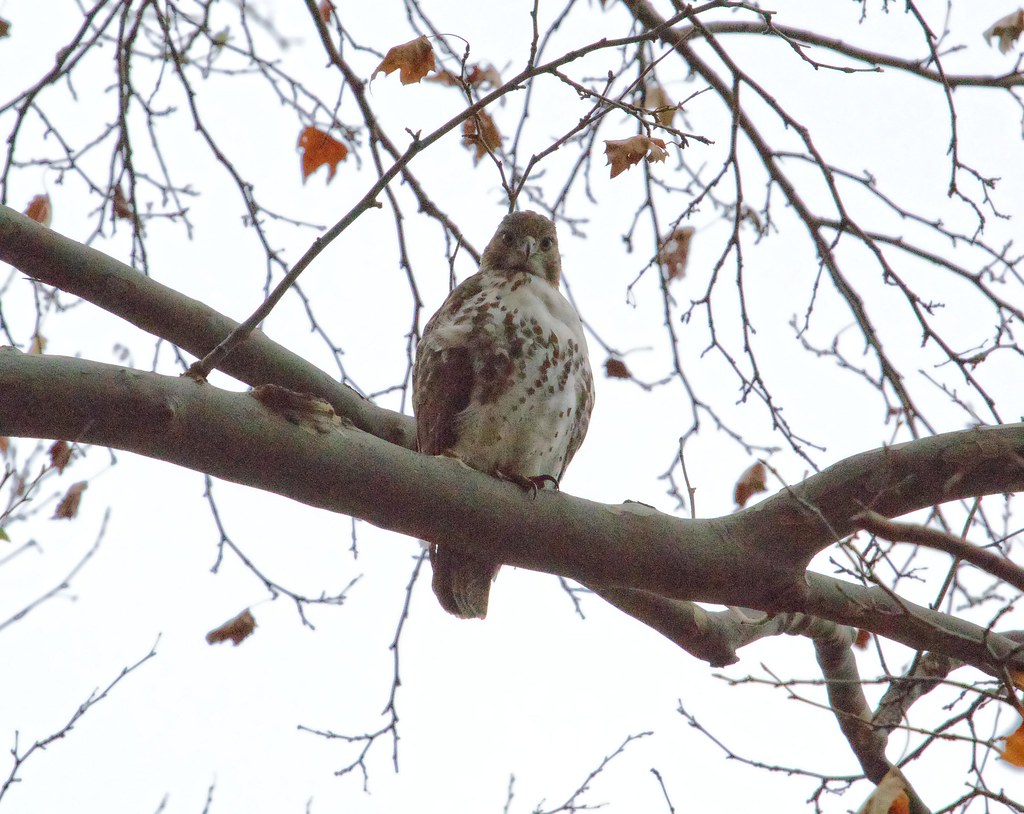 In between the two red-tails was this juvenile Cooper's hawk.  Seeing three hawks in one small area was pretty amazing, especially as they didn't seem to mind each other's presence. 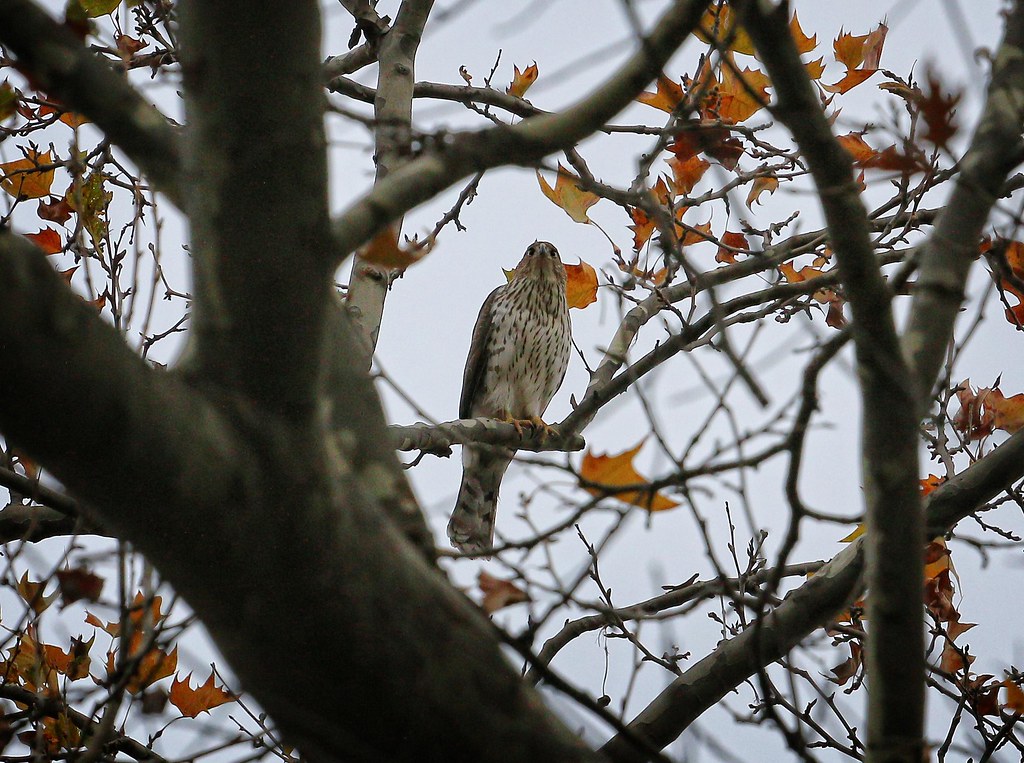 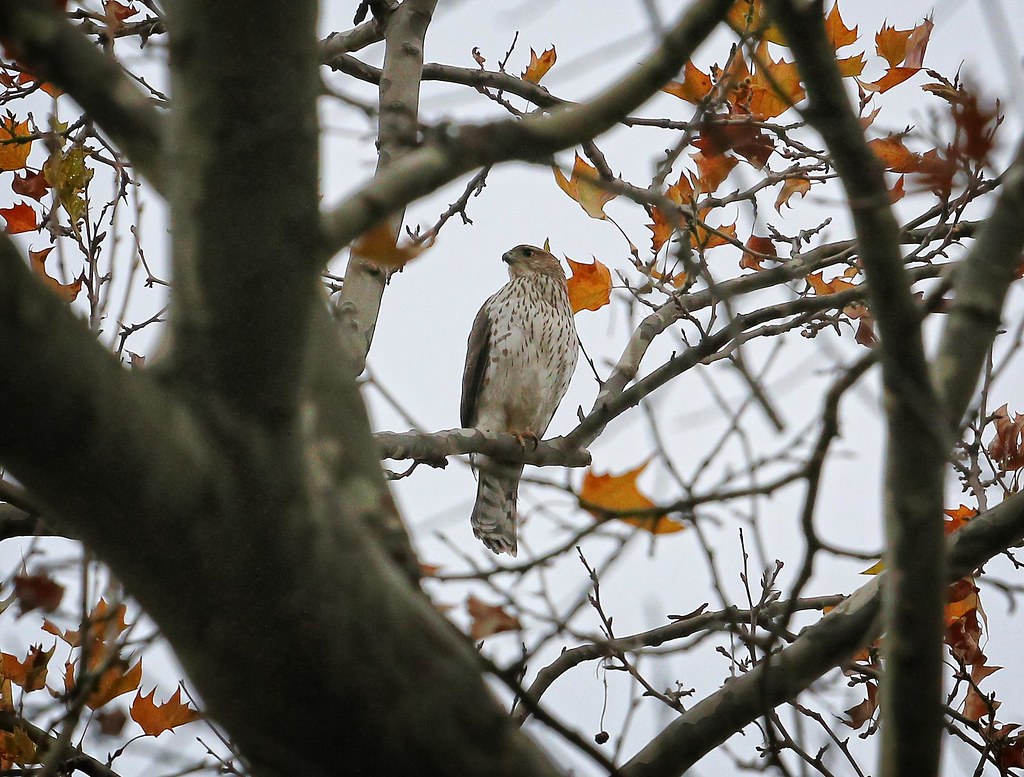 The following day, which was still annoyingly dark, an adult Cooper's hawk hunted in Tompkins Square.  I first noticed it when a flock of pigeons flew by and the hawk slammed into one of them.  There was an audible thwack, but the pigeon kept going. 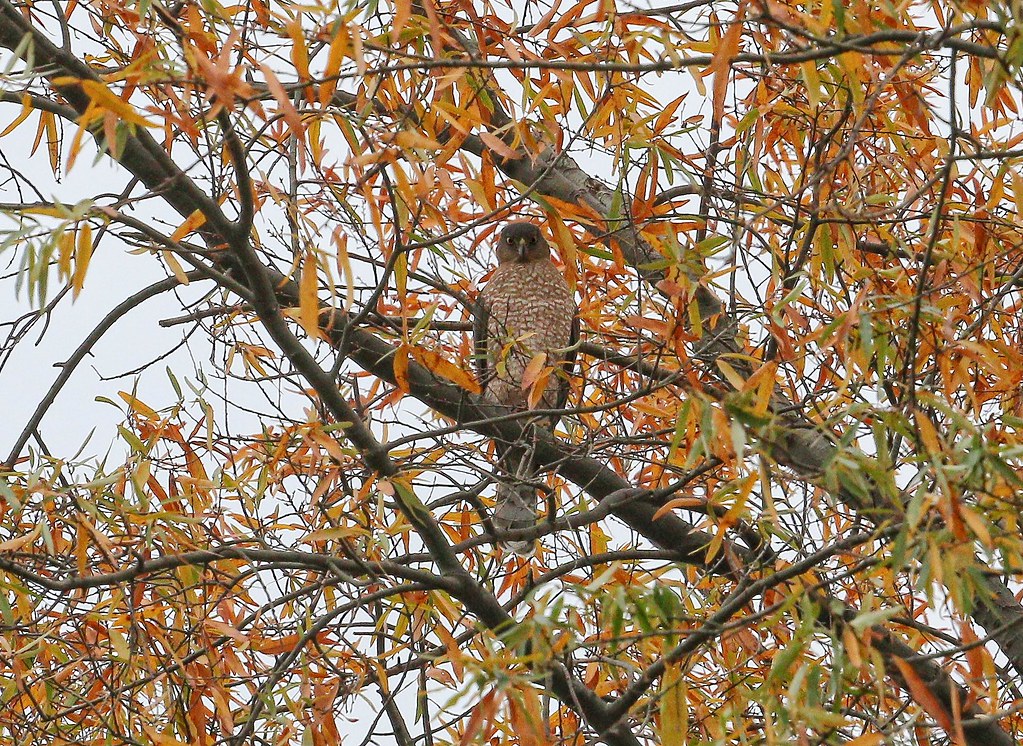 From this perch, the Cooper's made a dramatic swoop down and across the Krishna Tree plaza, right along the knees of people sitting on the benches there.  It all happened in the blink of an eye, and I failed to be quick enough to catch it with the camera.

Every few minutes, the hawk dove at pigeons, but never caught one. 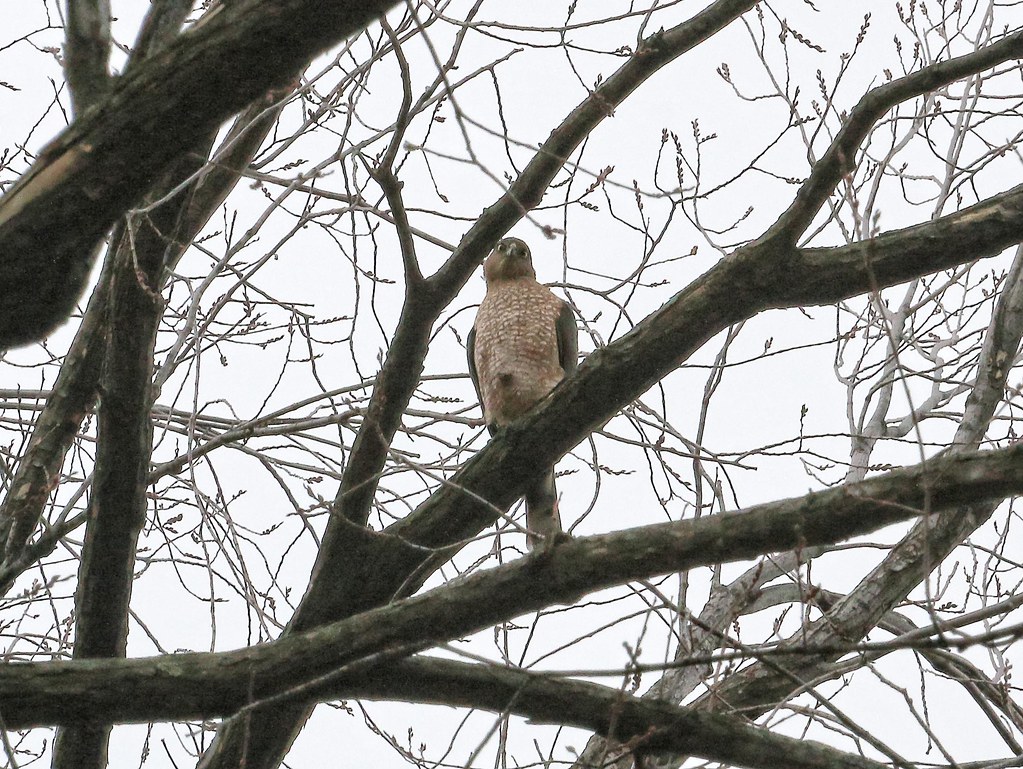 Cooper's are such fast flyers, and often perch in places that are hard to see, it was a challenge to keep up with this one. 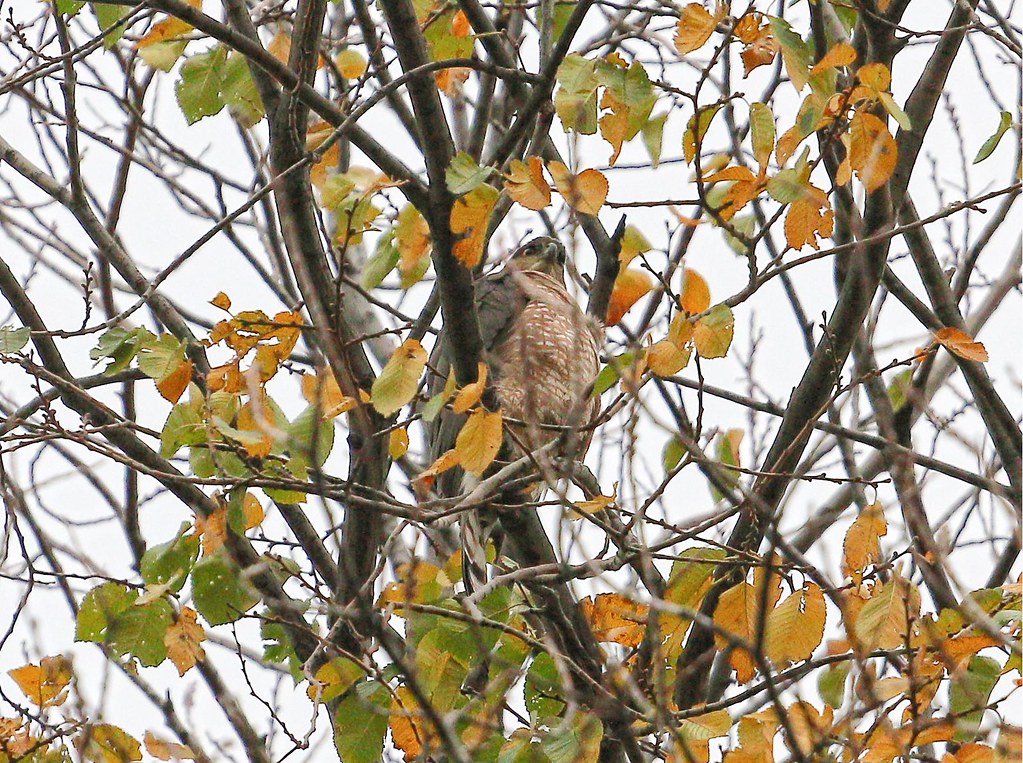 At the end of the day, after several hours of the Cooper's having free reign of the park, Christo flew in and forced the other hawk off its perch.  The Cooper's flew to a nearby tree, but wasn't intimidated.  Christo didn't seem interested in pursuing the matter, so they eyed each other for a while before the Cooper's opted to fly right past Christo and out of the park. 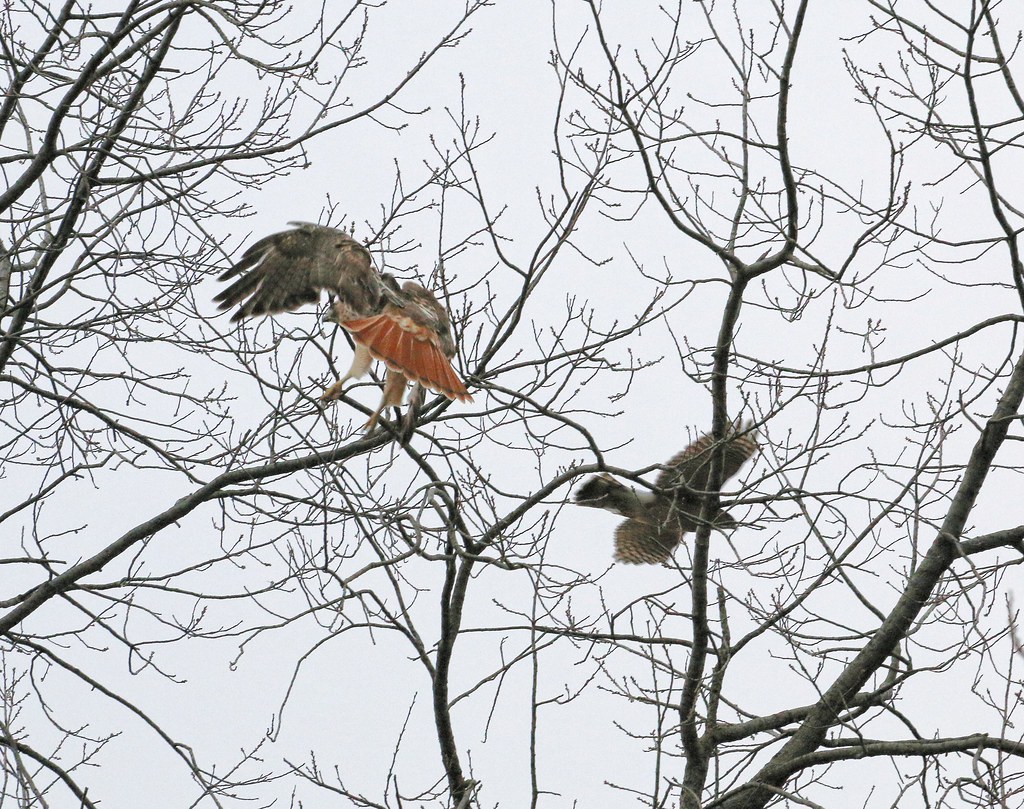 Just as I was leaving for the night, the Cooper's hawk returned to the same spot, and I saw it was being chased by a second Cooper's.  Over the course of the weekend, other hawk watchers and I were able to determine the second Cooper's was a juvenile.

There was a brief bit of sunset on Saturday, which Dora and Christo seemed to enjoy from the top of the Christodora building. 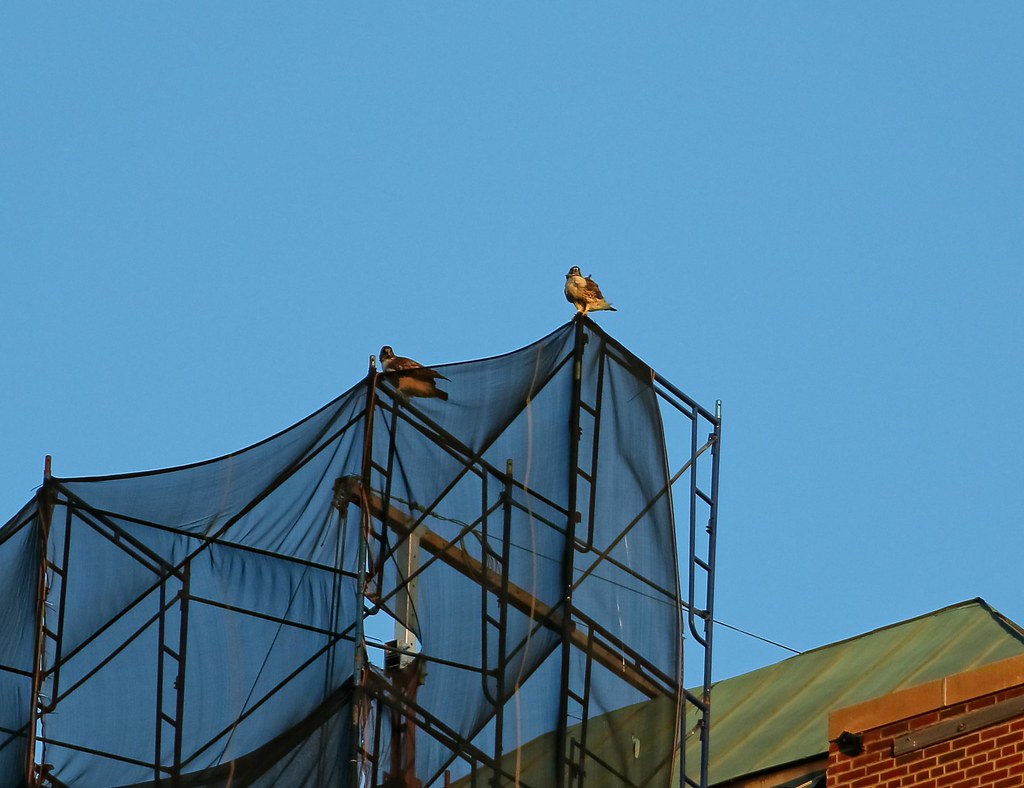 Wind gusts that day were up to 40mph and Christo let himself be lifted and carried by the wind to the opposite side of the scaffolding.  He floated back and forth several times - was he trying to impress Dora or just having a bit of fun? 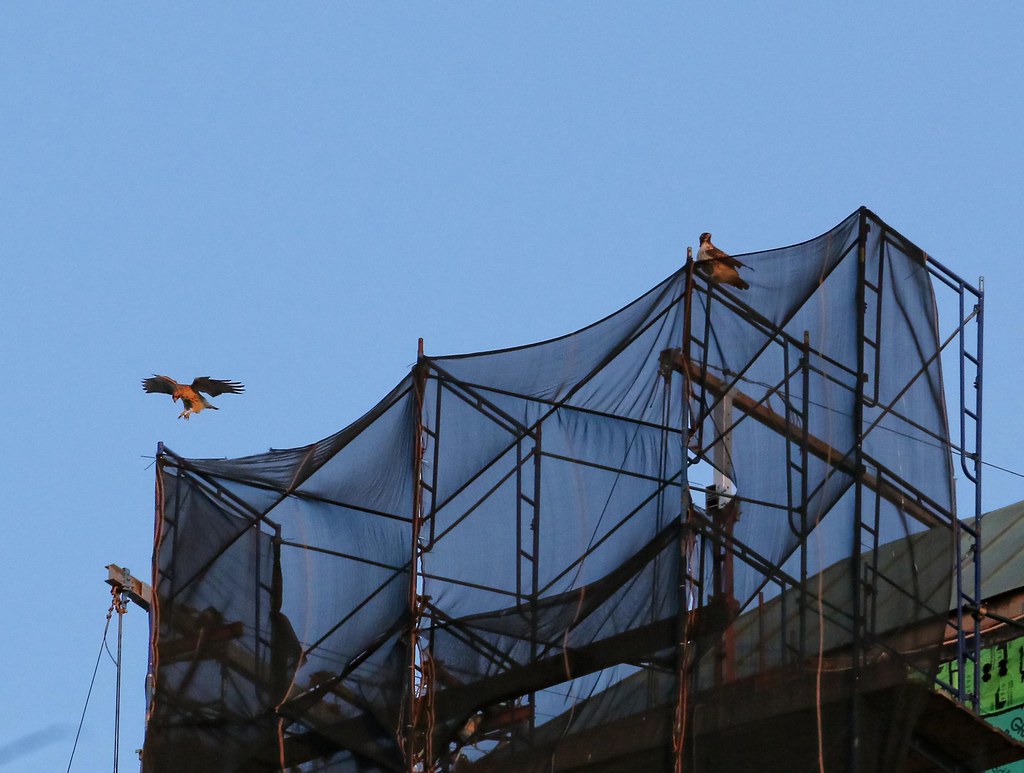 Earlier in the week, Dora had done the same thing in the high winds.  In the photo below, you can see how strong the wind is as it blows the feathers on her chest. 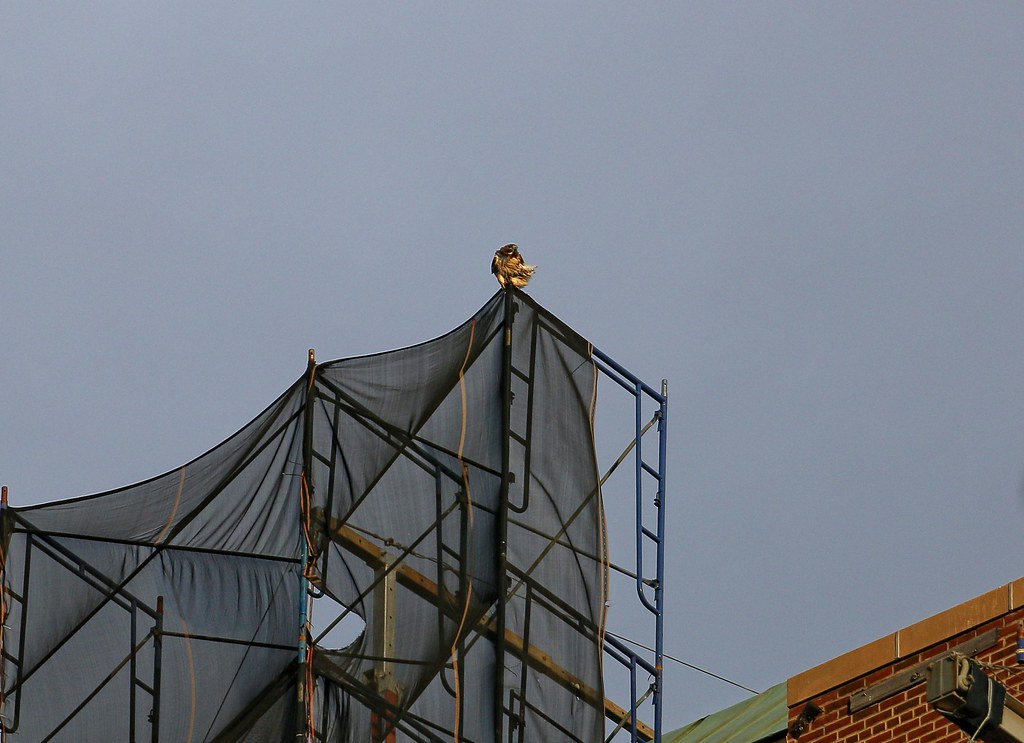 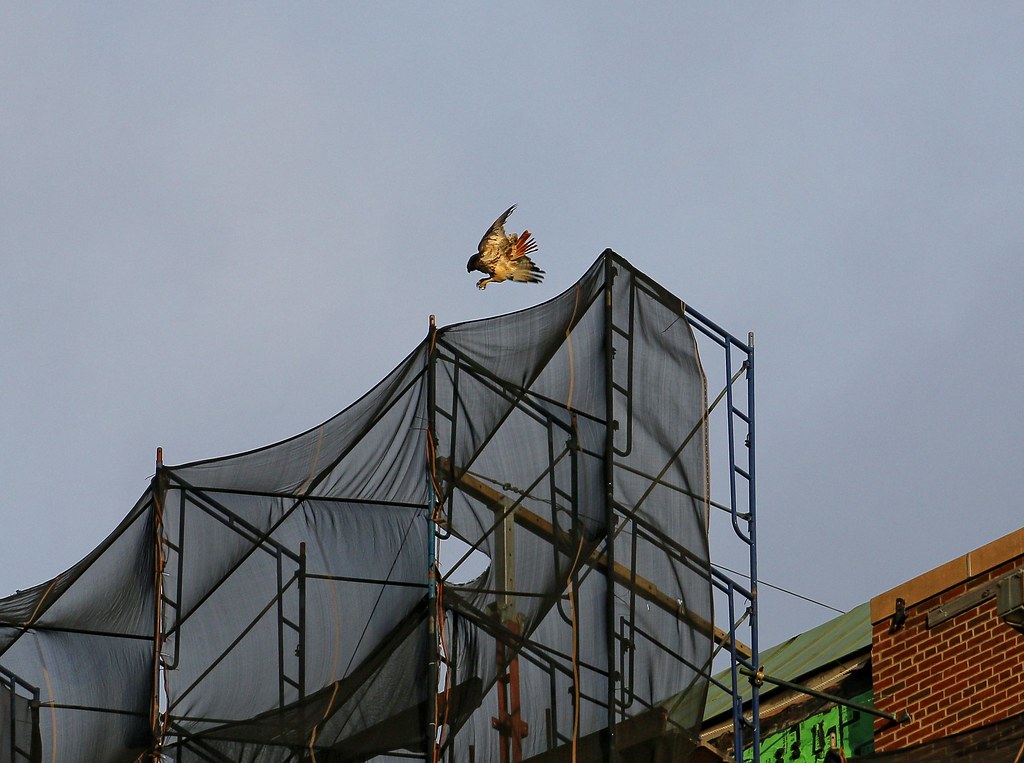 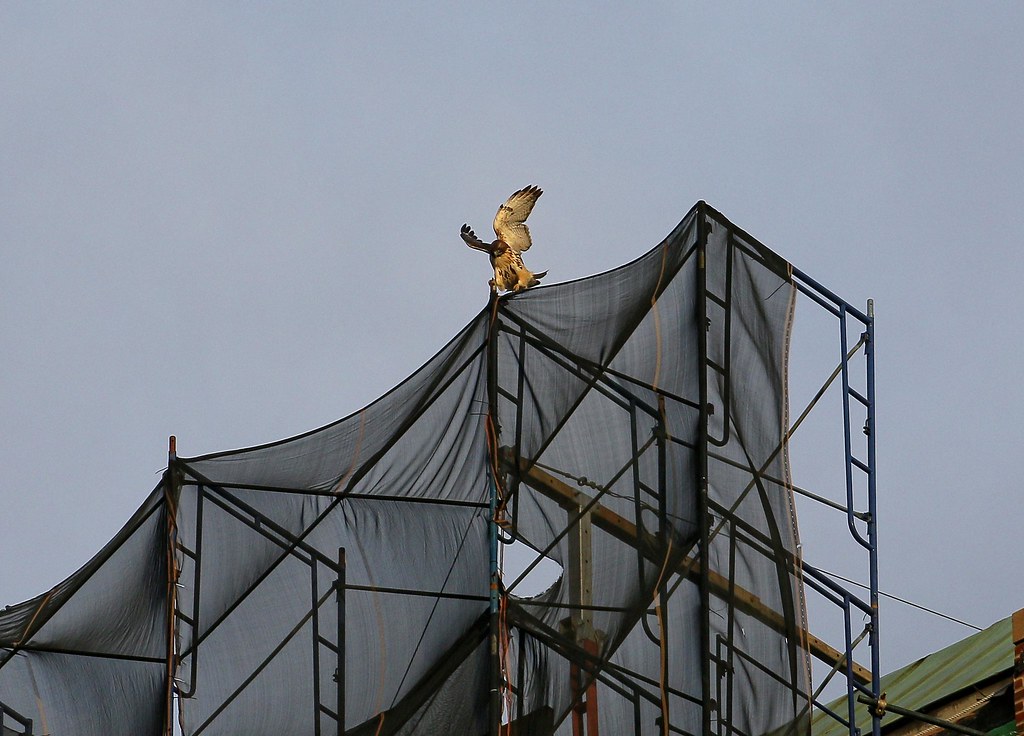 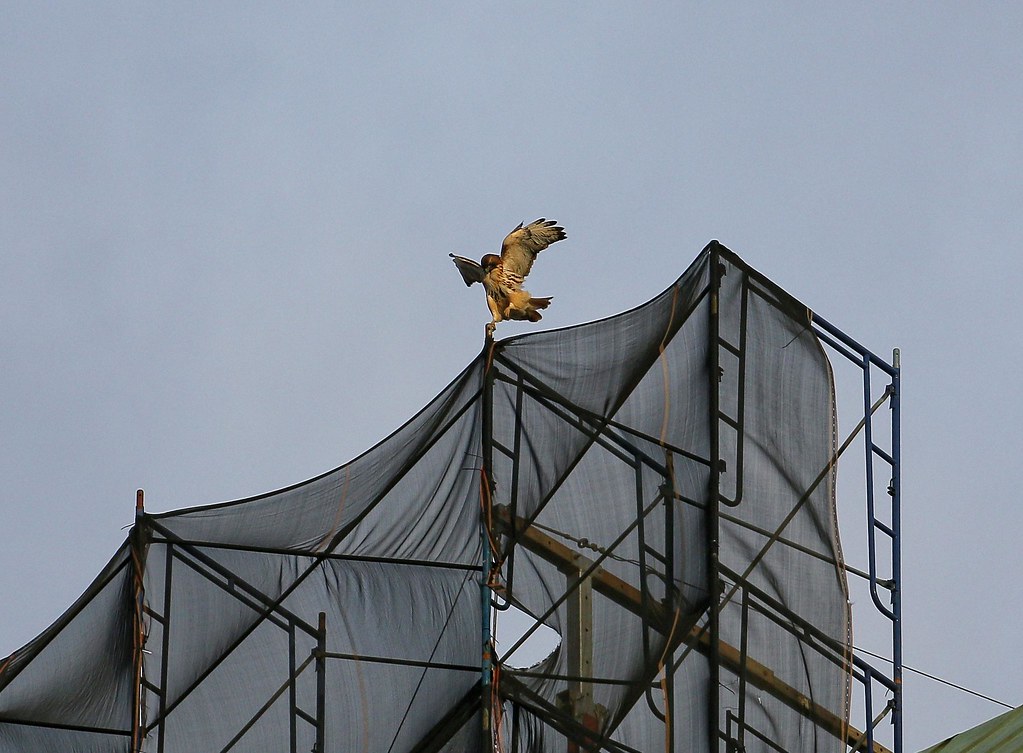 More to come...
Posted by Laura Goggin Photography at 9:42 PM