Our Tompkins Square Park red-tailed hawk family is doing well and can still be seen in and around the park. In anticipation of the tropical storm forecast for today, I went to check on them this morning and found two fledglings chasing Christo around, screaming at him to get breakfast. As it's been miserably hot and humid, and because of the pandemic, I've not spent much time in Tompkins Square recently, but the hawks appear to be doing fine.

This last spring saw many hawk nests throughout the city, and one I was really looking forward to observing was on Governors Island. When the island closed for the season in October 2019, I observed what appeared to be a mated pair of red-tailed hawks. This was especially intriguing as I don't believe a hawk nest had been recorded on the island before. Throughout the winter, I was able to participate in a bird survey project on the island which allowed me to keep tabs on the hawks and I was really looking forward to documenting their nesting season.

This is the hawk pair, with the female on the left and the male on the right. Note the difference in size - she is significantly larger. Their coloring is also different with the male having a much darker head and markings on his belly. It's hard to see in this photo, but his eyes are bright amber-yellow with a dark ring around them that gives him a very striking look. The female has a paler head with prominent light supercilia (eyebrows) and a broader chest. 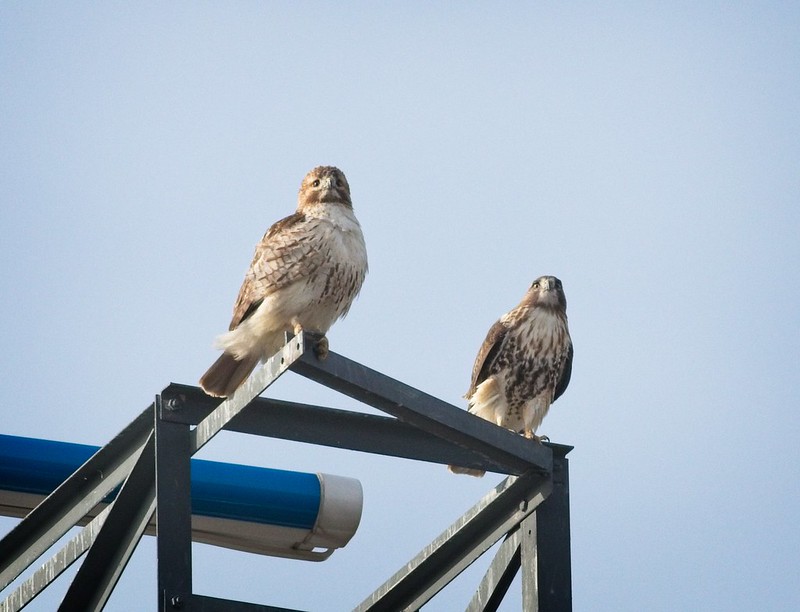 The two were perched together screaming repeatedly. What was disturbing them? 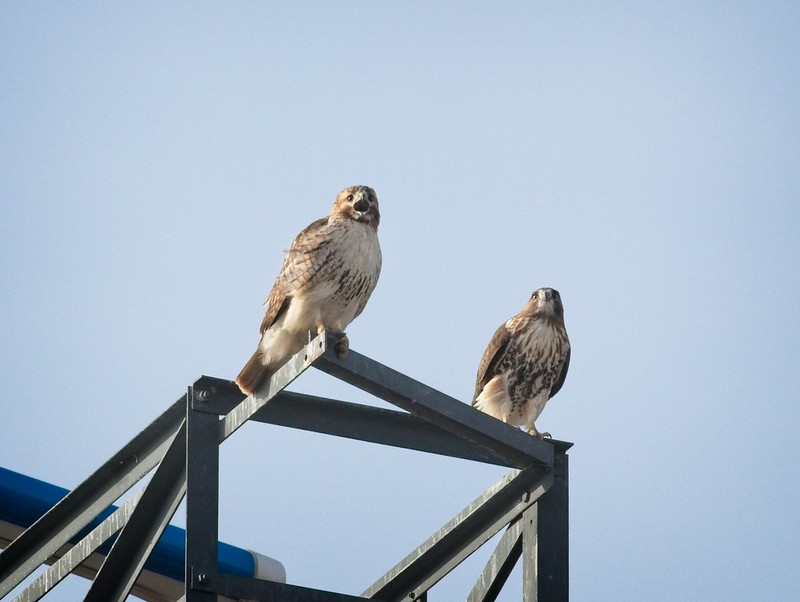 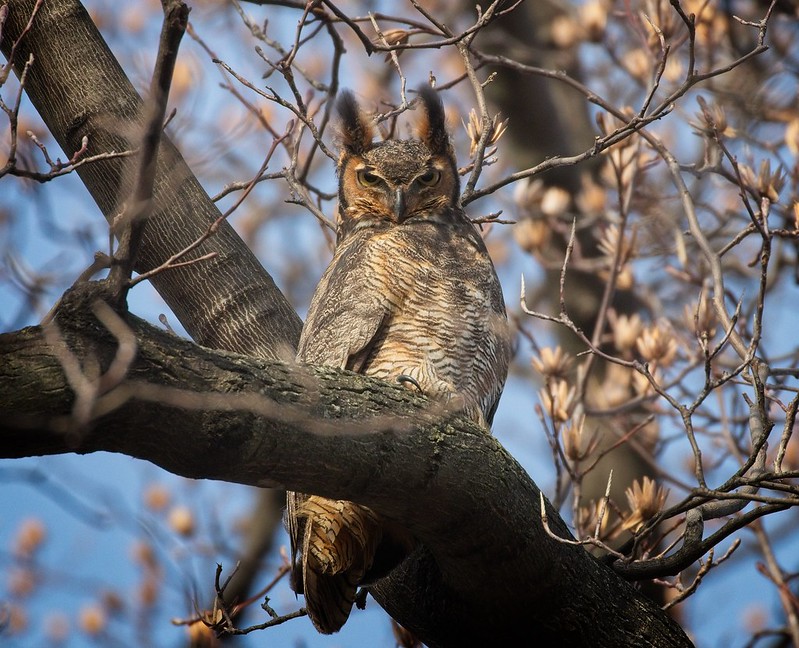 A great-horned owl was minding its own business, perched quietly in a tree, but the hawks, a mockingbird, and several crows did not let it go unnoticed. The mockingbird gave the owl away first, then the crows proceeded to harass it relentlessly. The hawks seemed content to scream at it from a distance and let the crows do all the physical bullying. 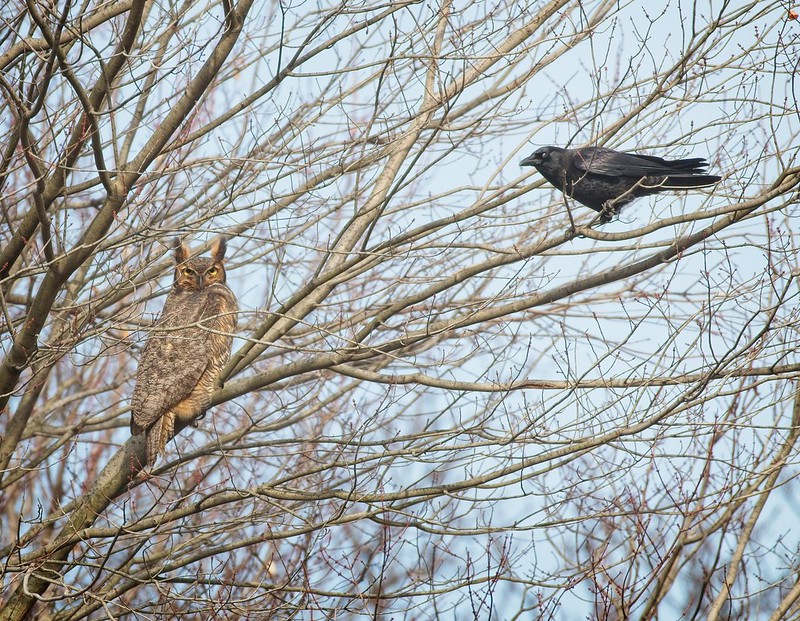 By perching together and acting defensively against the owl, the hawks further convinced me they were planning to nest on the island. Prior to this season, I'd seen red-tails on the island, but they never acted so territorial. These two were definitely different.

This is the female perched on one of the buildings. 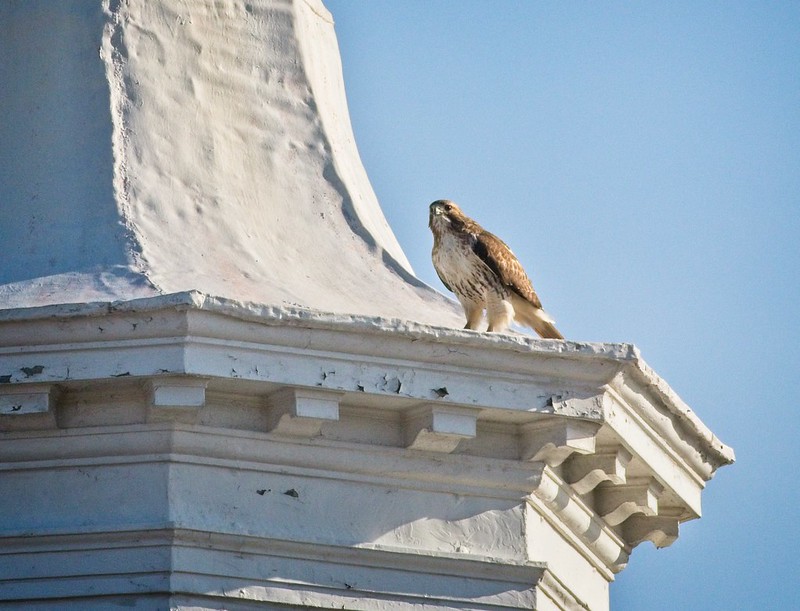 I later saw her gathering sticks and grass at Hammock Grove. Definitely a sign of nesting! 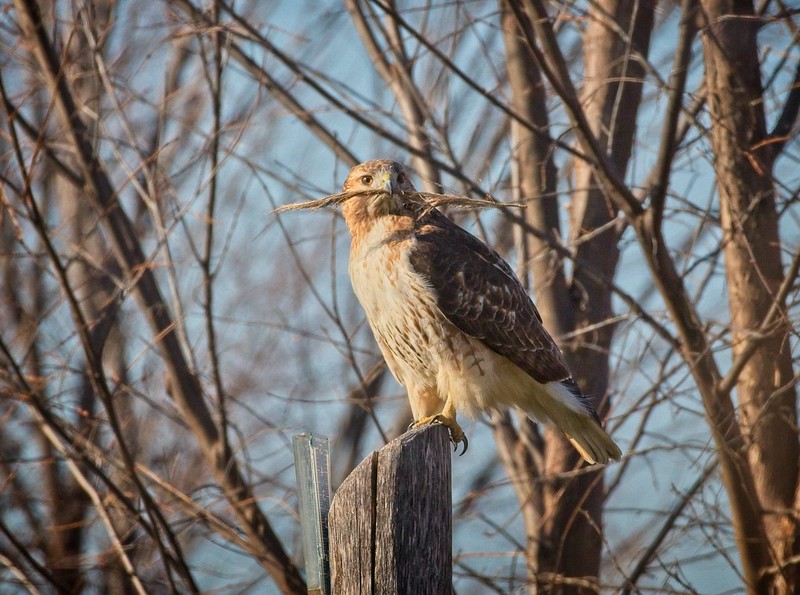 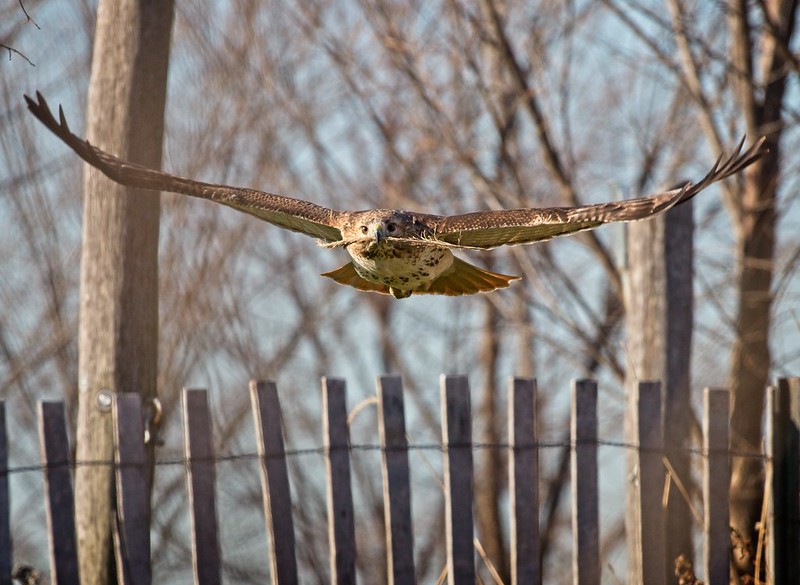 With the coming of the new year, the hawk pair remained together and appeared to still be vigilantly defending their territory. In the photo below, the male is on the left and the female is on the right. 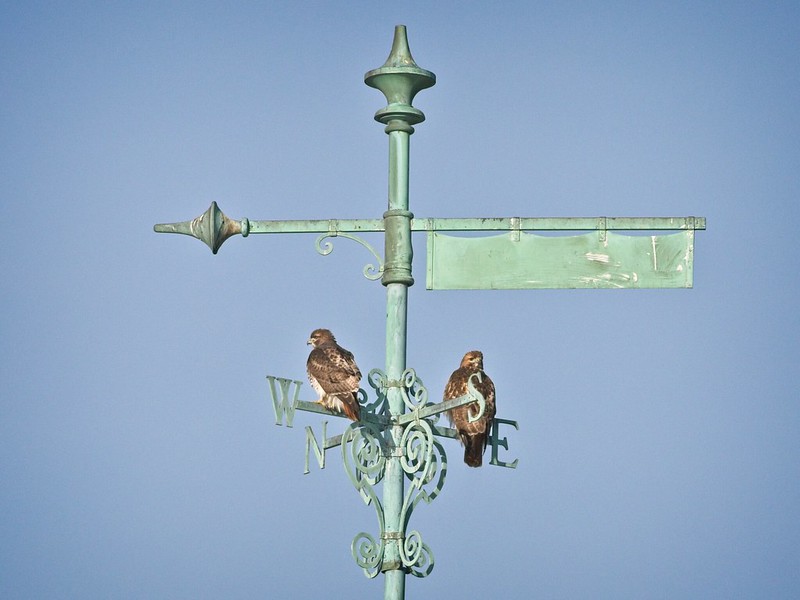 This is the female perched near the Hills. This was a freezing day and I recall this side of the hill was sunny and out of the wind, making it pleasantly warm. My notes from that day say it was 24°F. 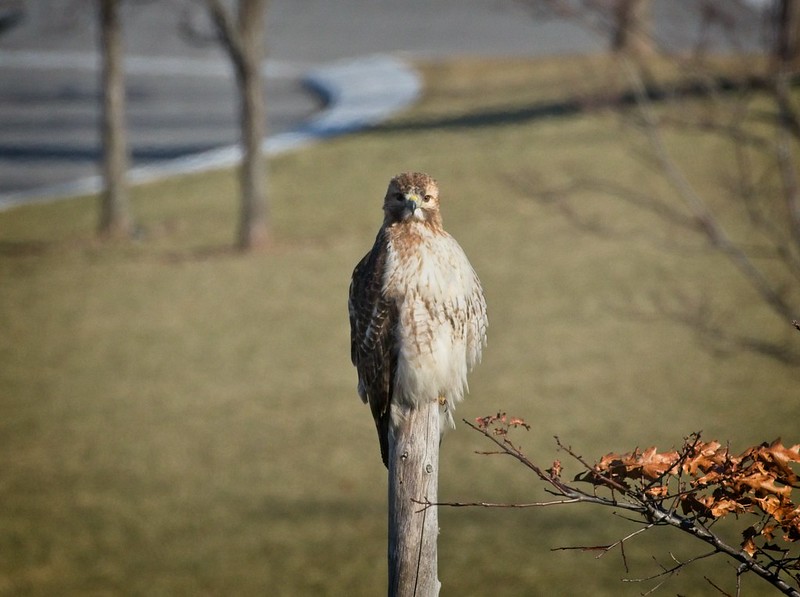 This is the male flying by - note his bright eyes. 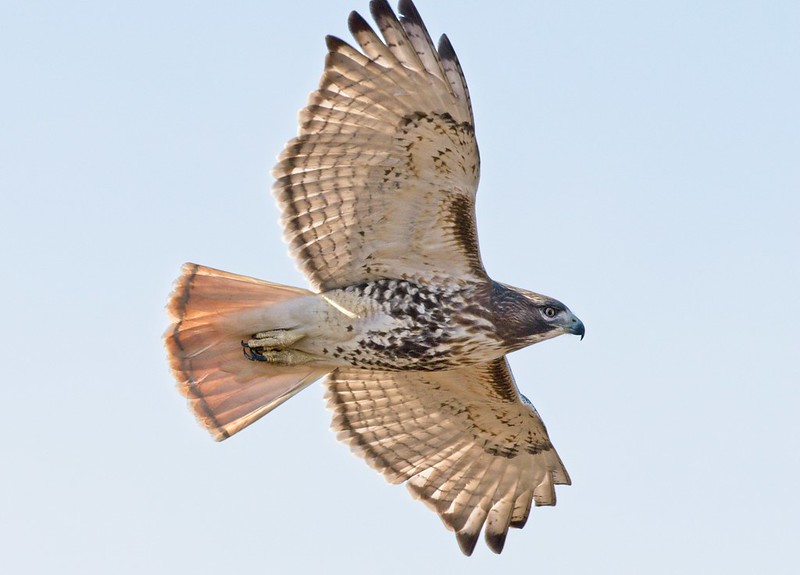 On another cold winter day (22°F), I found the female hawk sunning herself on a pile of sand, which was probably warm. 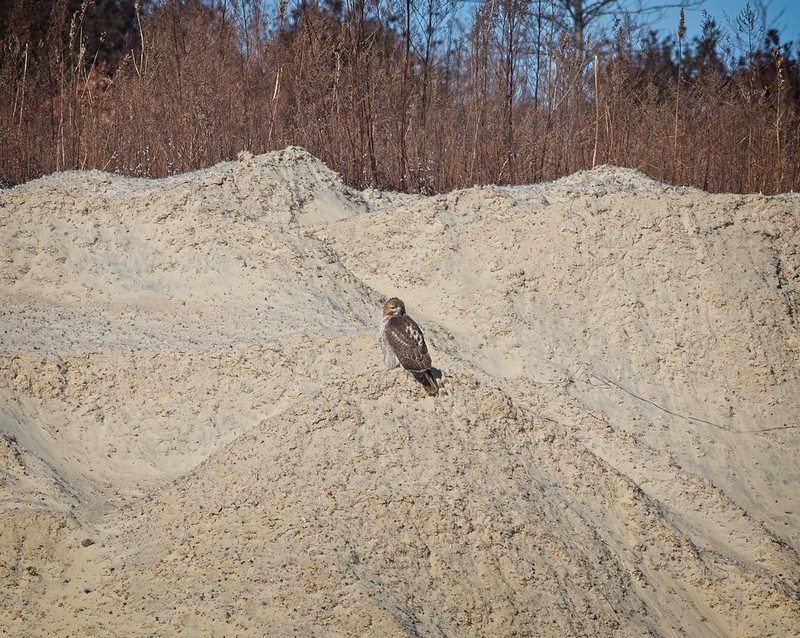 She kept her feet buried in the sand for almost an hour. This area was also sheltered from the wind. 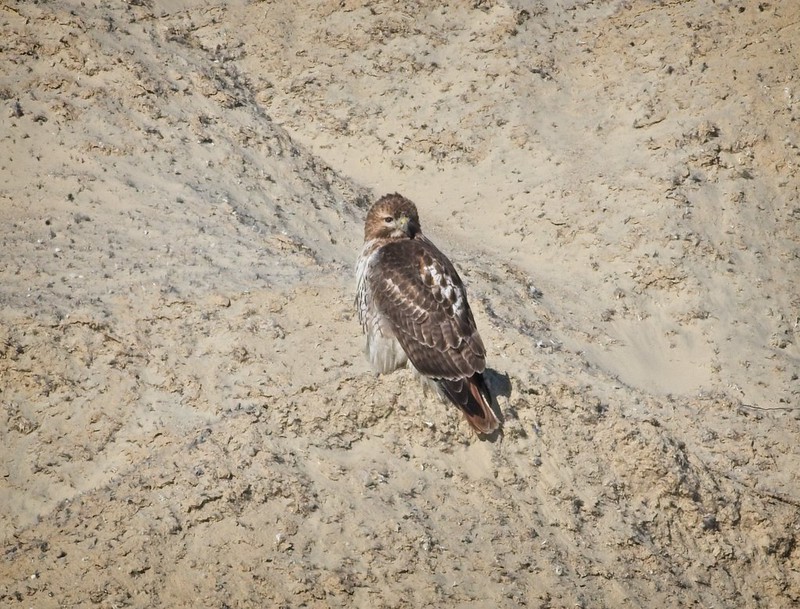 After enjoying the sand for a while, she relocated to a sunny spot on the lee side of Outlook Hill and remained there the rest of the afternoon. 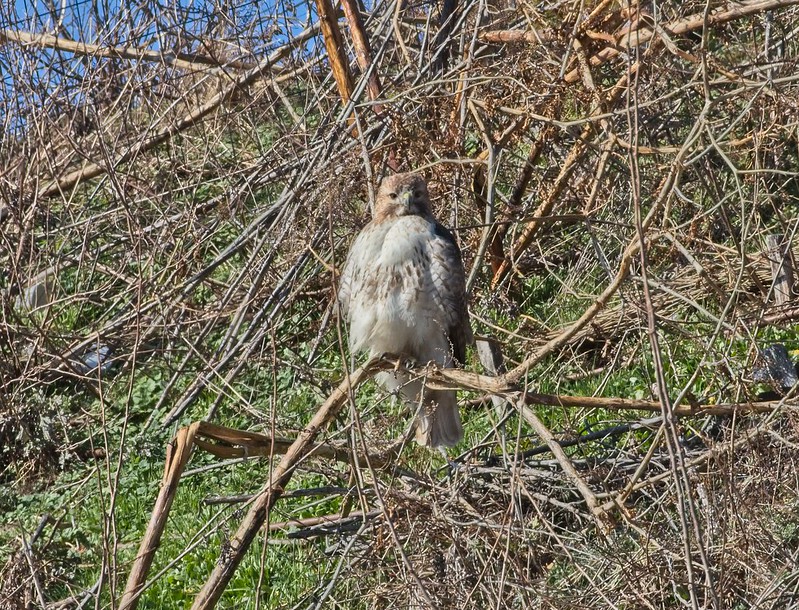 On a subsequent visit, I found the hawks hanging out together (male on the left, female on the right) but they remained mysterious about their nesting activities. 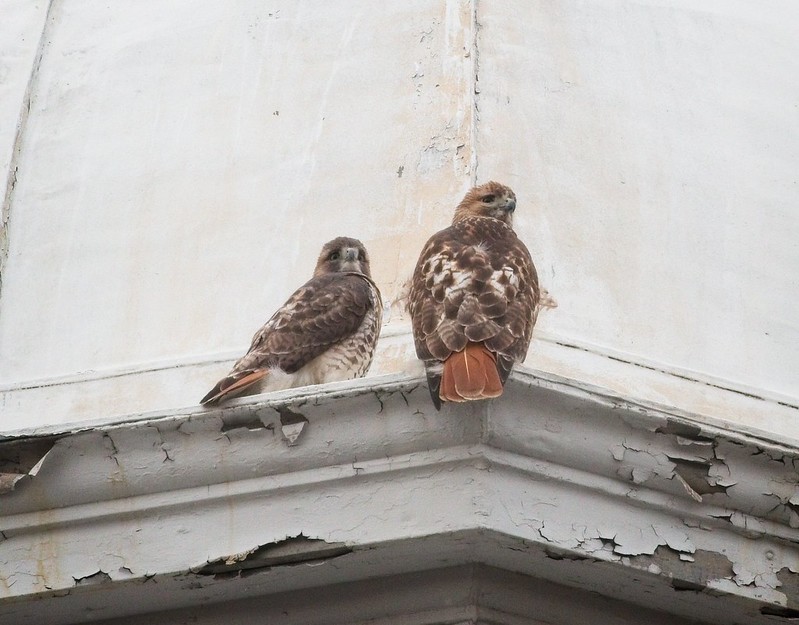 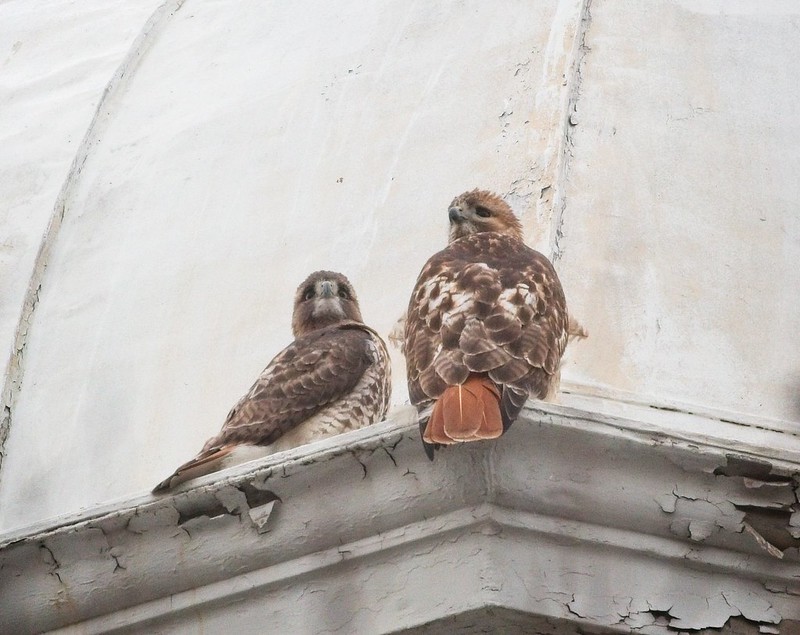 Finally, in March, there was confirmation of a nest. This is the male taking food (pigeon) up there. 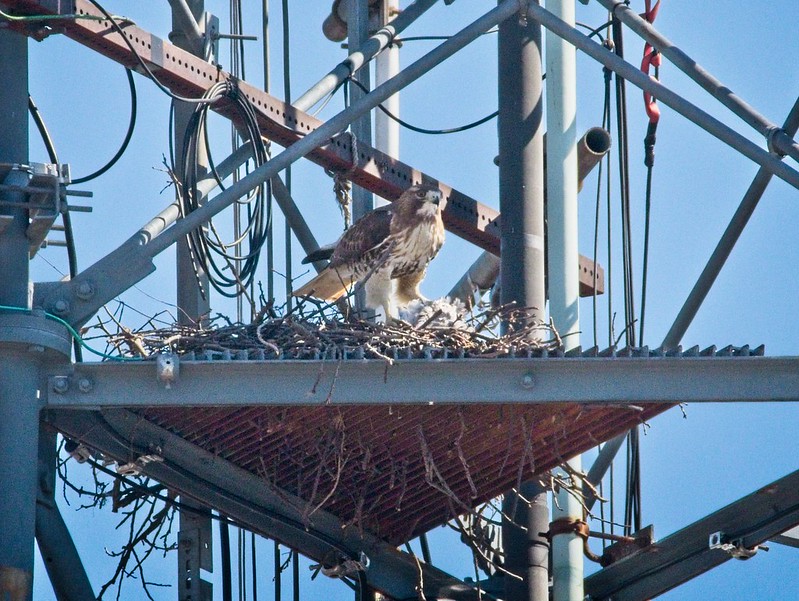 Later that day, the female was lying down in the nest and appeared to be brooding. 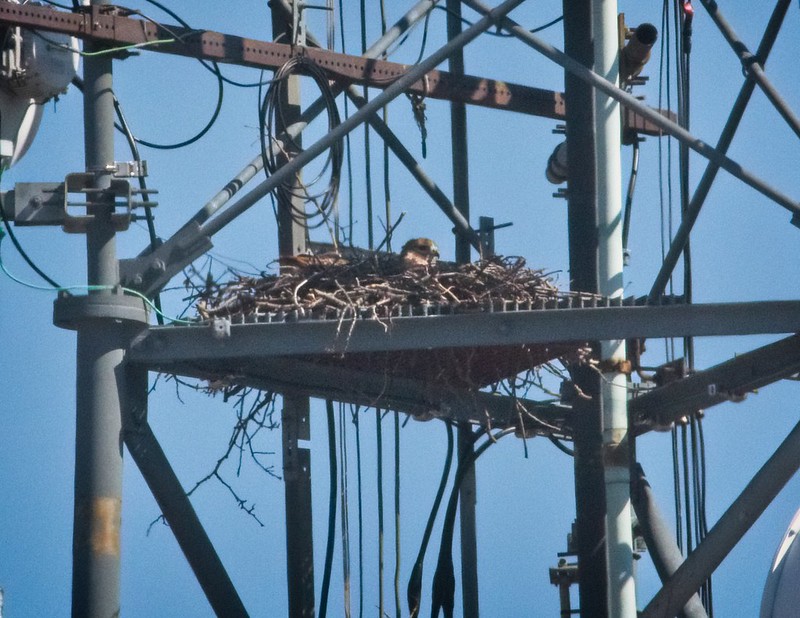 Unfortunately, the pandemic caused the island to close to non-essential workers, so my last visit was March 16, just as the nesting season began. My last photo was of the female hunkered low in the nest. 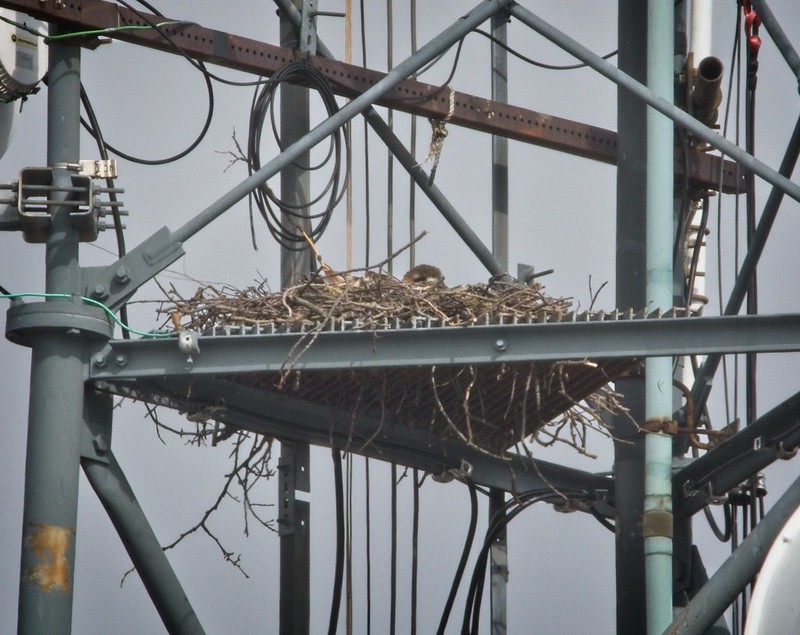 Fast-forward to July 20, which was my first opportunity to visit the island after it reopened to the public on July 15. I was heartbroken to have missed the entire nesting season, but was curious to see if I could find the hawks and if any fledglings might still be around.

I found the male hanging out in the shade trying to beat the heat (93°F). 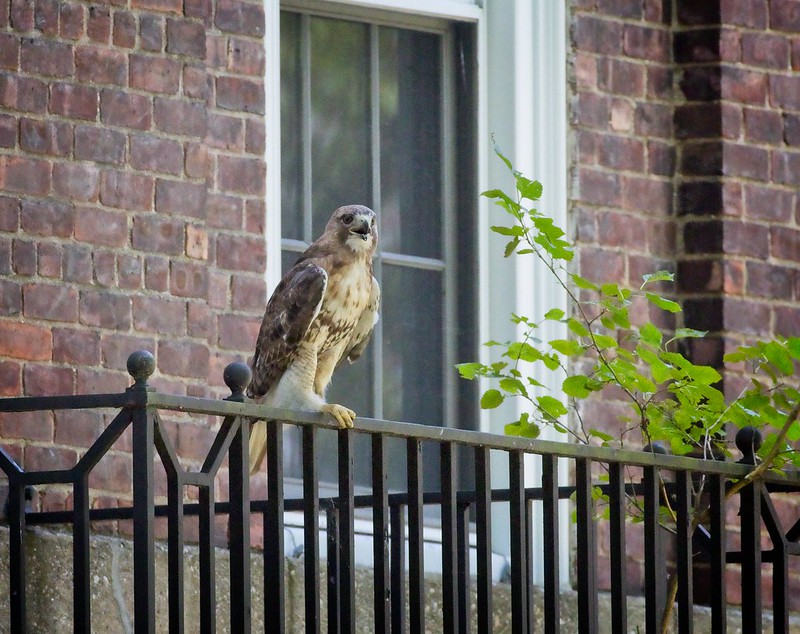 He's molting, so appears a lot lighter - especially his head - but his distinctive eyes are the same. 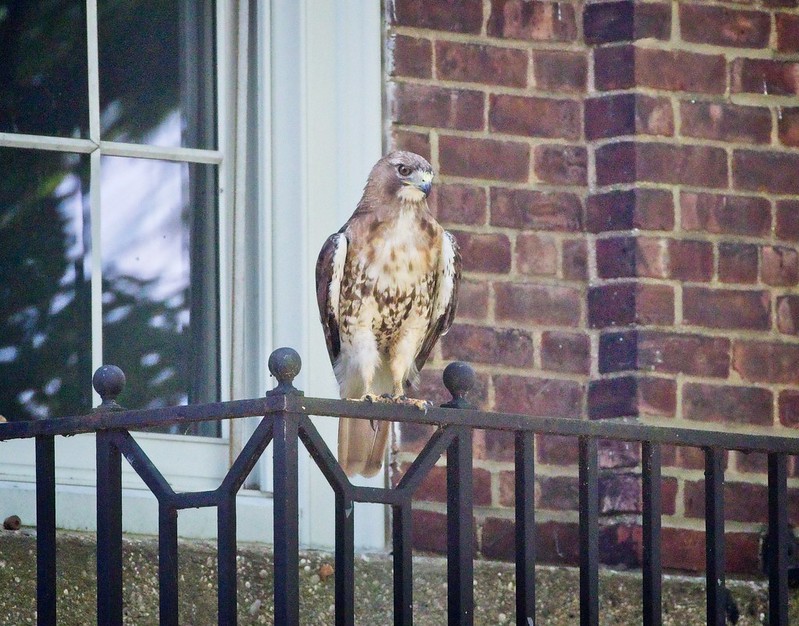 I watched as he scavenged some scraps from the ground before being scared off by a vehicle. 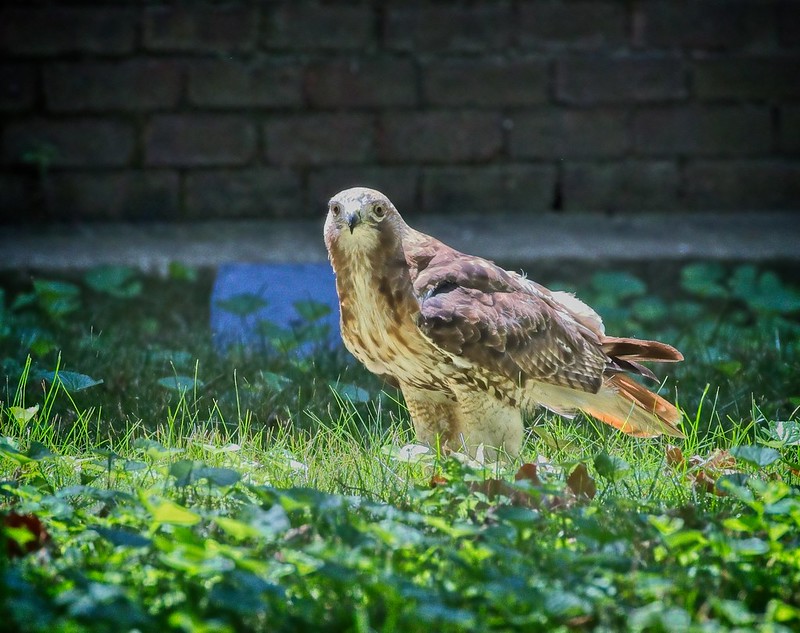 Looking up, I spotted a juvenile, who must be one of the fledglings. I'd been told there were two, but so far, I have only been able to see one at a time. This one was intently watching the adult male. 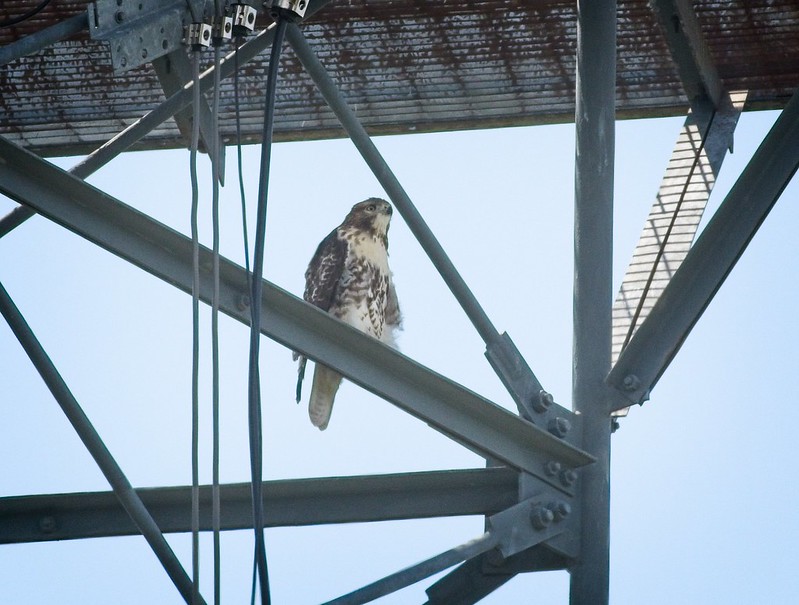 It later perched on the weather vane, a favorite perch for the adults. 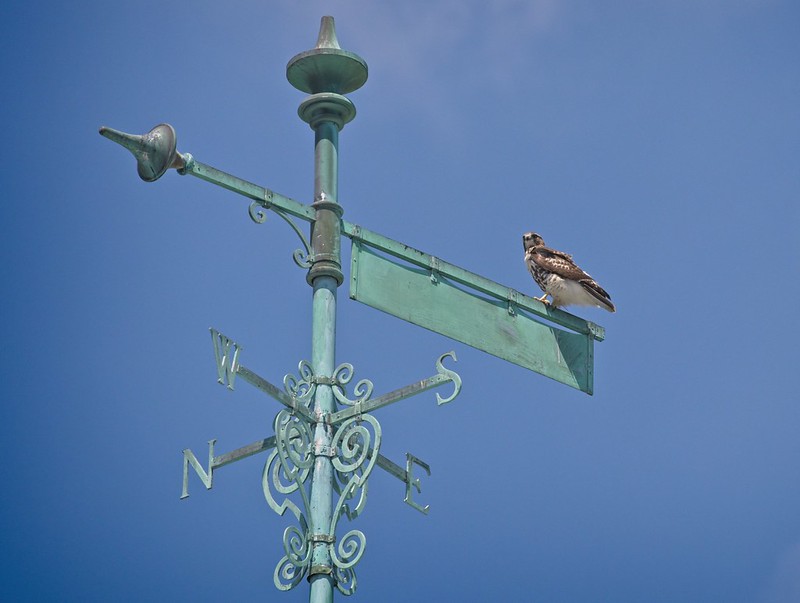 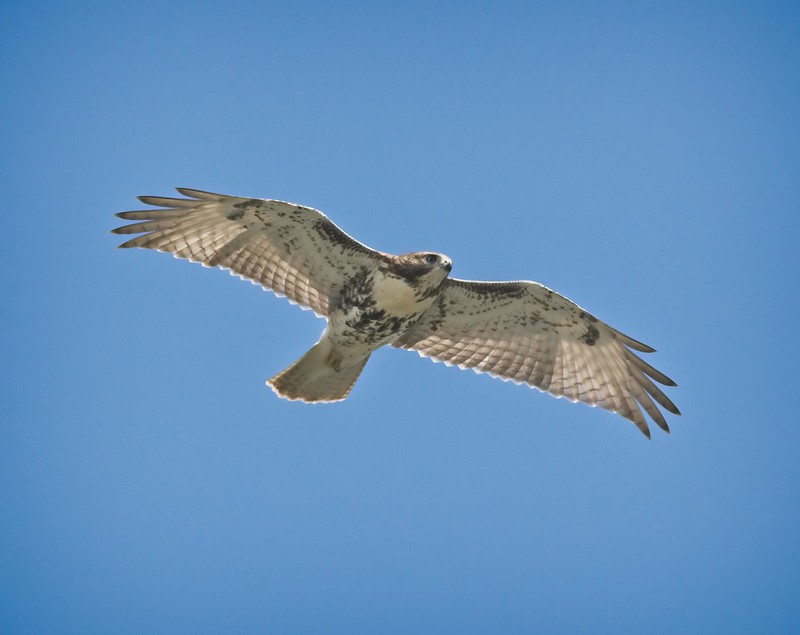 Although I'm disappointed not to have been able to observe these hawks as they hatched and raised their young, I am thrilled they successfully nested on the island and hope this pair continues to hold this territory. This definitely gives us something to look forward to next year.