For the first time today, I saw at least one of the Tompkins Square hawk fledglings catch a rodent on its own.  When I arrived in the park around 6pm, one was eating a mouse that someone said the hawk had caught itself.  As I watched, one of the fledglings dove into the bushes and apparently grabbed a rat who then screamed for several minutes.  It wasn't possible to get a clear view into the bushes, but by the sound of it, the hawk didn't know how to kill the rat once it grabbed it.  Eventually, the hawk flew off empty-taloned, so I don't know if the rat escaped or if it was left to be retrieved later. 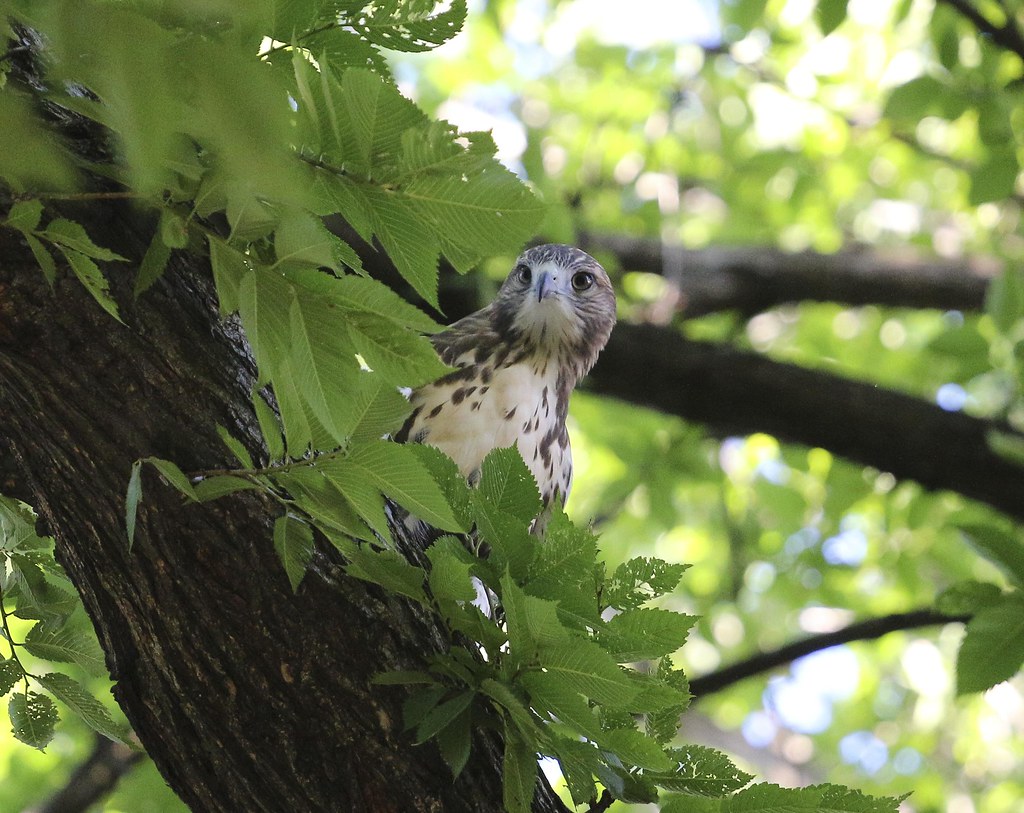 A few minutes later, another fledgling (or possibly the same one as I couldn't keep track of who was who) pounced on something in the bushes on the opposite side of the lawn.  It, too, came up empty-taloned, but it's clear the young hawks are honing their hunting skills. 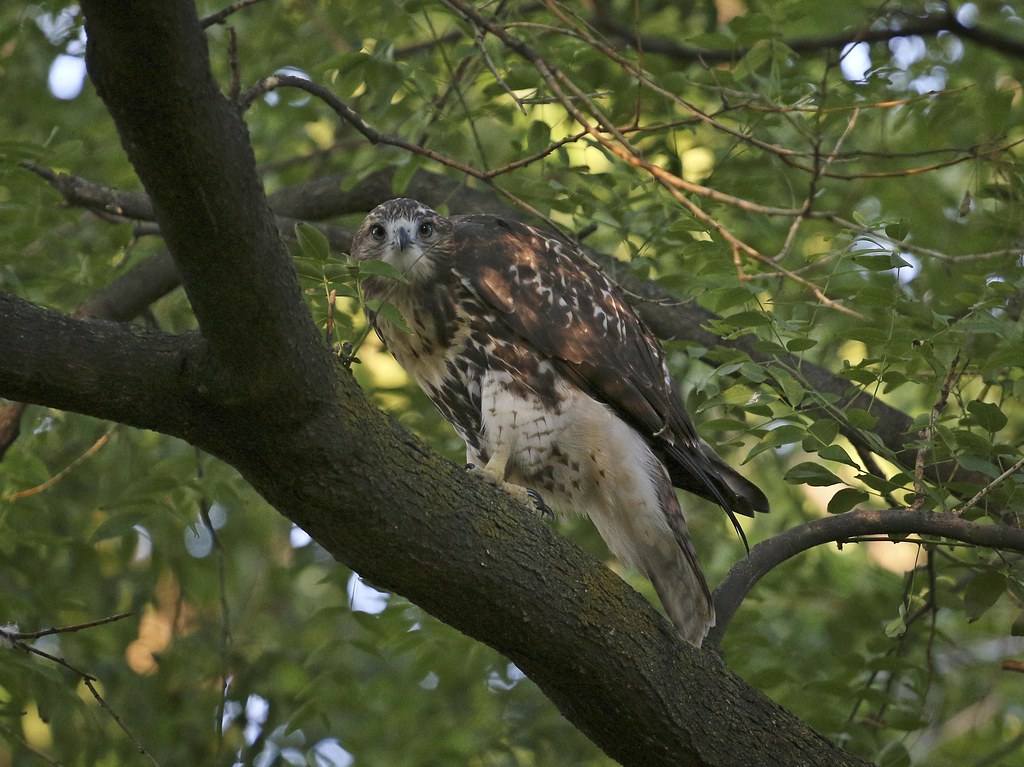 Around 7pm, dad Christo arrived and dropped off food for one of the fledglings.  He is still their primary provider, although he's no longer 'preparing' their meals by plucking or tearing it up beforehand. 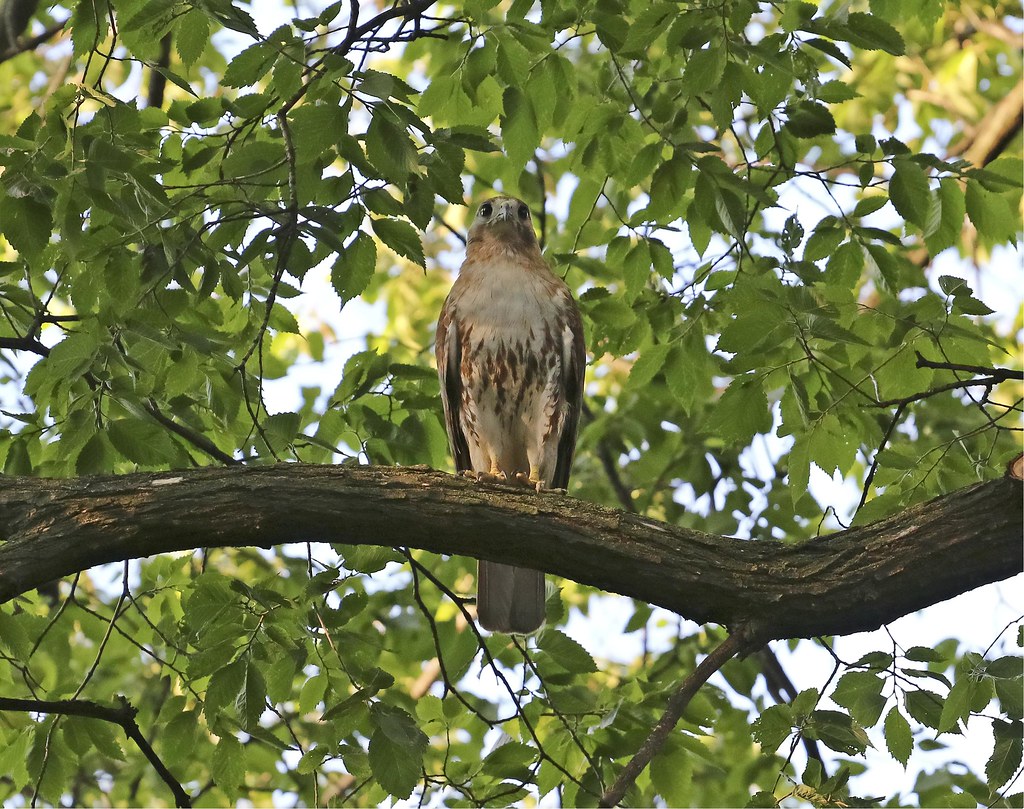 Mom Dora also made an appearance. 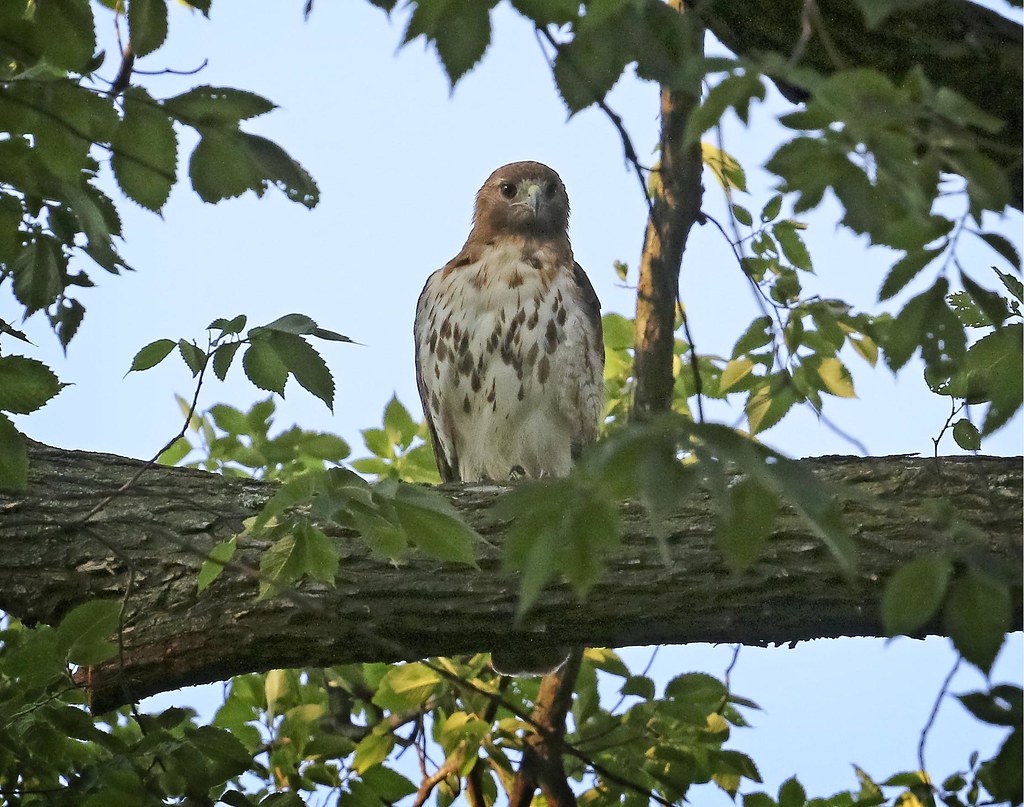 She is seen here on the left while the fledgling is on the right.  When she arrived, the fledgling began squealing and mantling its food as if it was afraid she might take it. 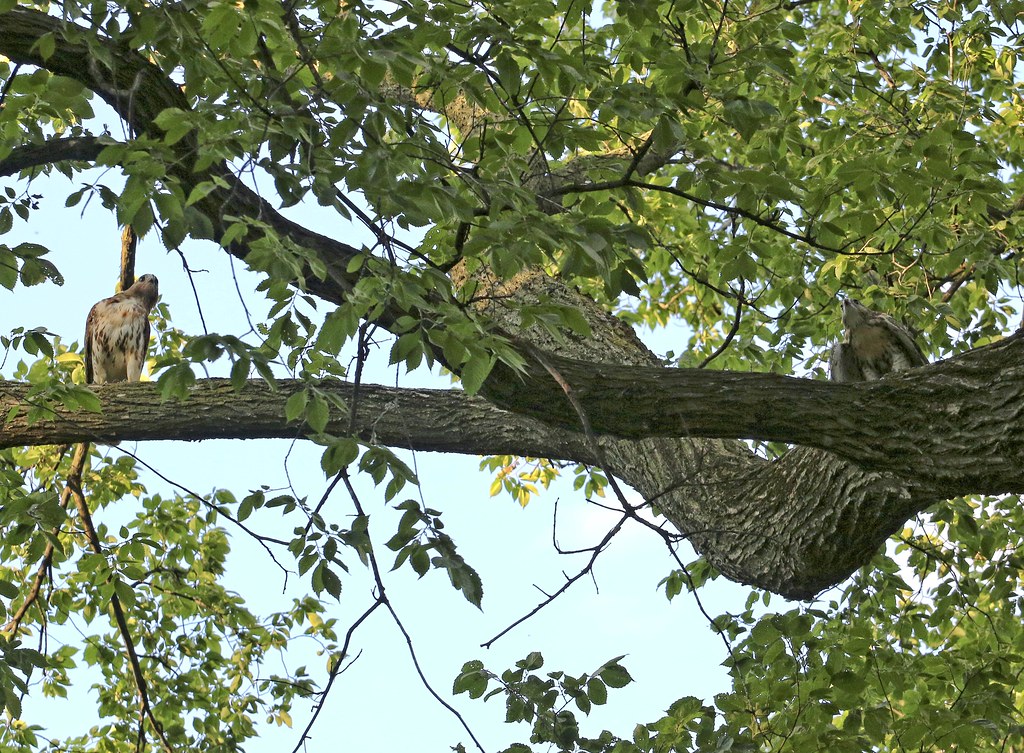 Indeed, after the fledgling ate a few bites and wandered off, Dora came over and finished off the leftovers. 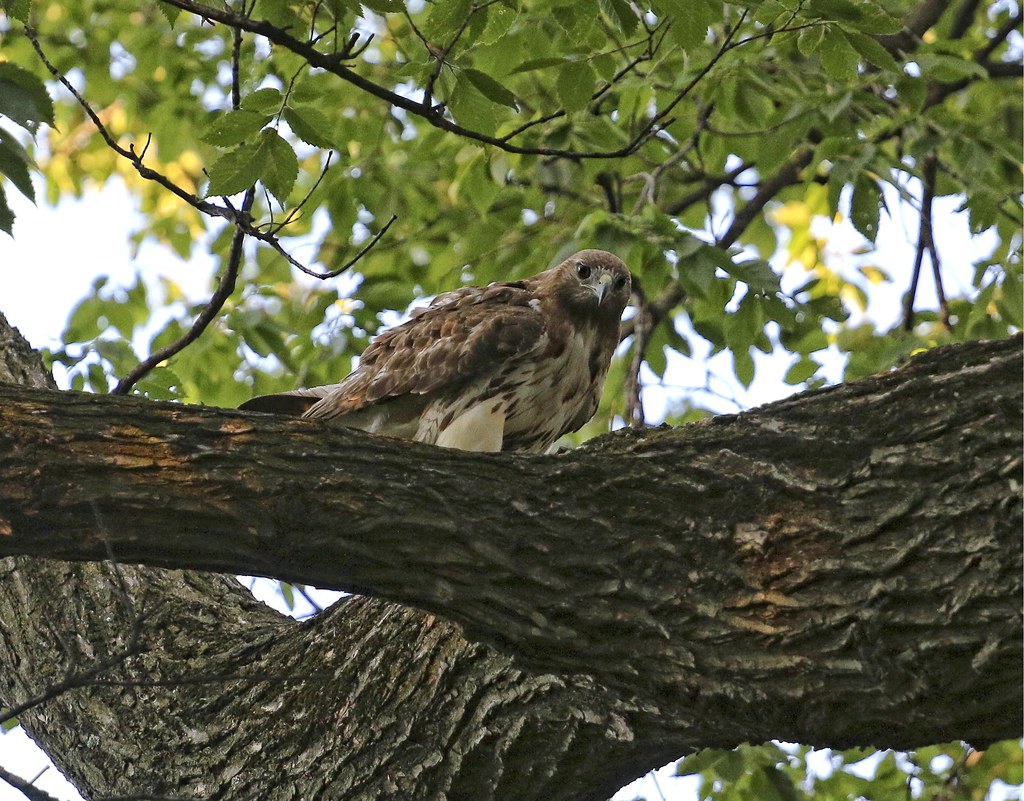 One of the challenges lately has been capturing all three fledglings in one shot.  So, I was really excited when they all perched together in the same tree.  However, they were totally uncooperative and refused to pose, so the photo below is the best I could do.  Two hawks are squished together on the right and the third is behind some leaves to their left. 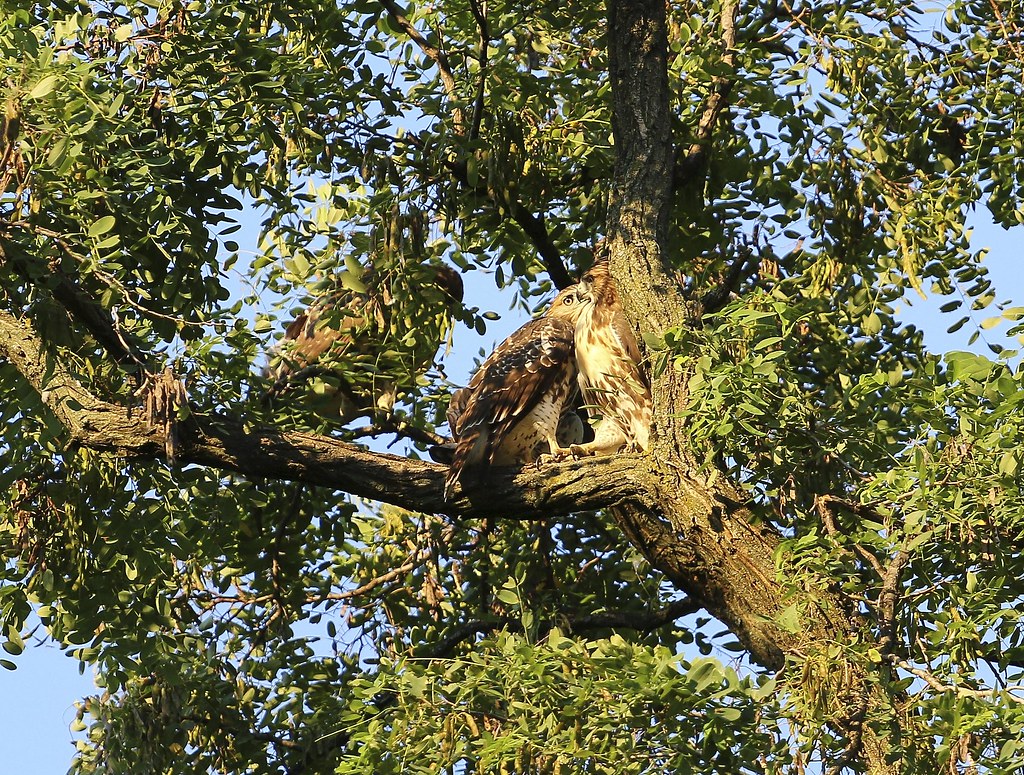 Then they spread out a bit in the tree and were clearly visible for a few seconds. 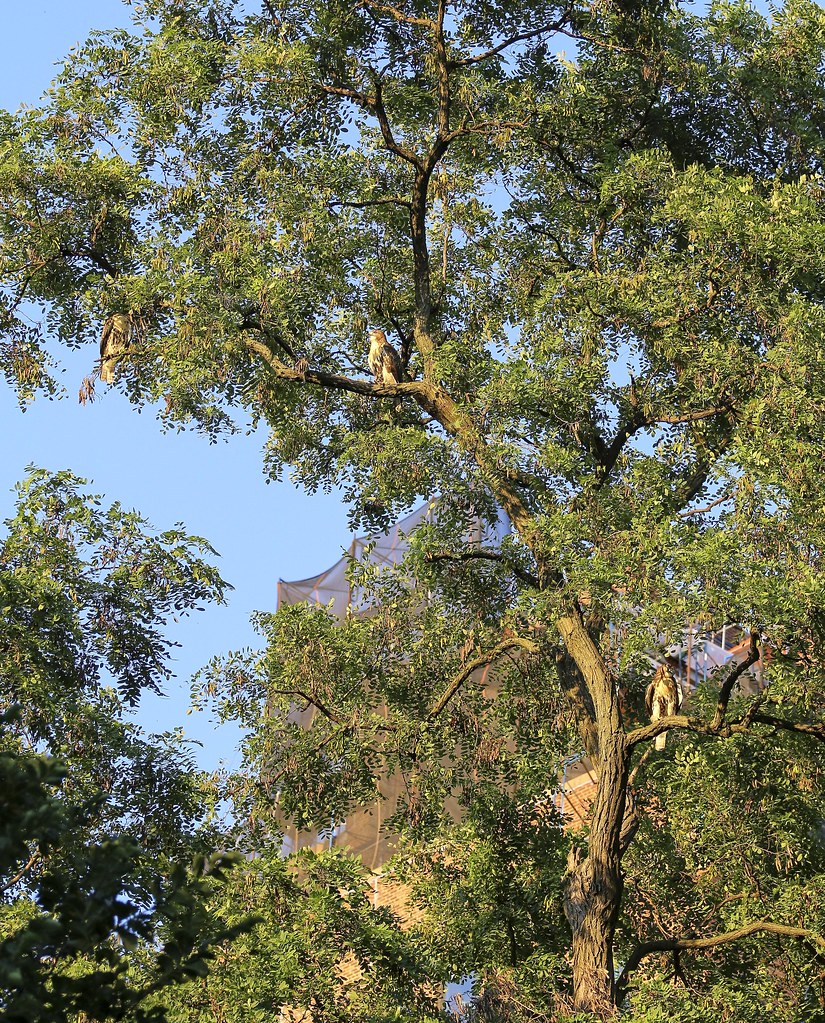 One of them flew off towards the flagpole where Christo was calling. 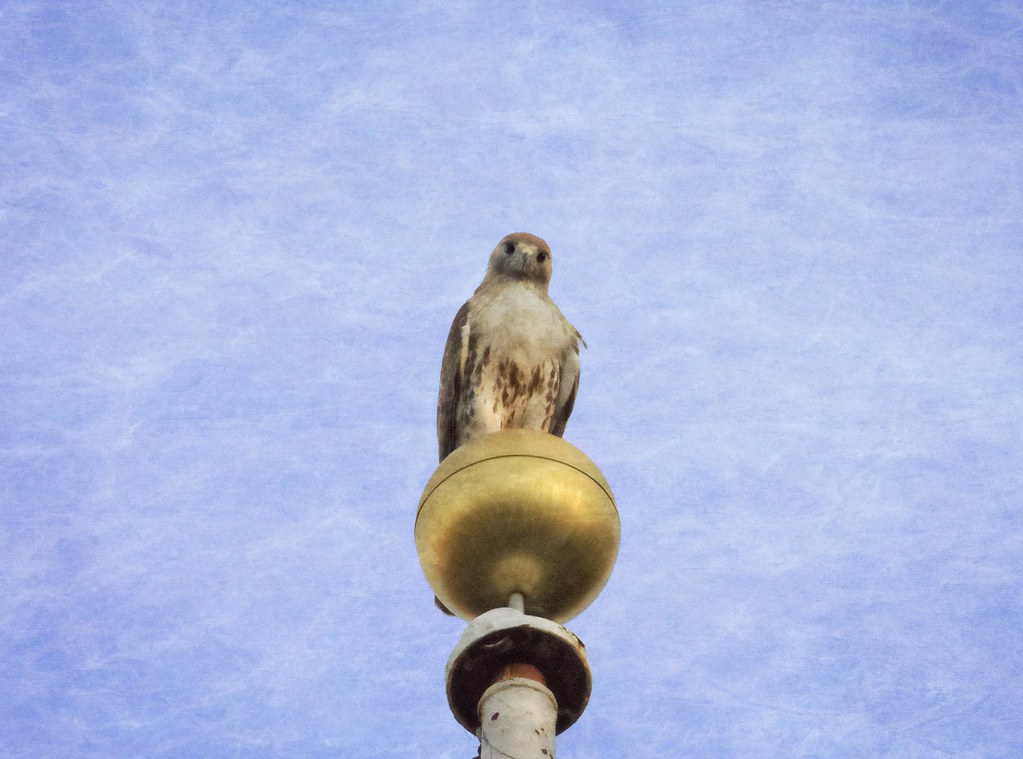 Christo on his throne.

Christo had left a rat in a tree just a few feet away and the fledgling began eating it on a branch.  They must learn everything, including how to hang onto their food while balancing on a branch.  The fledglings haven't quite mastered this and have been dropping their food regularly.  This is exactly what happened to this little guy, who let the rat fall into the bushes below. 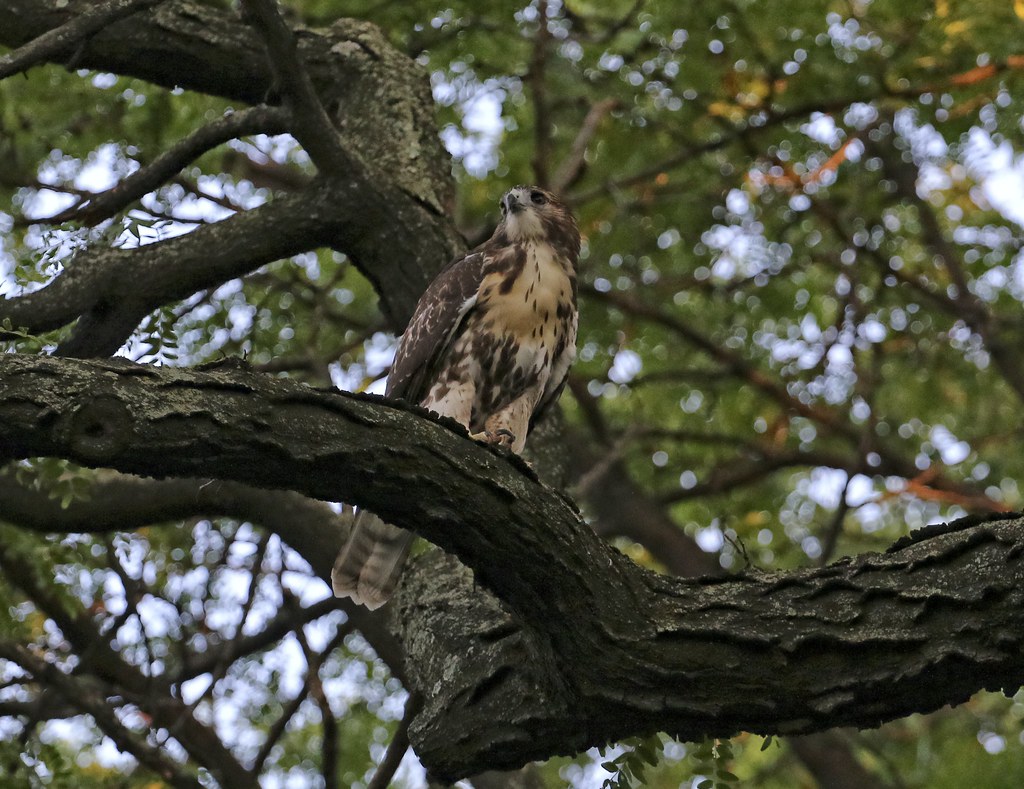 The fledgling cried and cried until Christo dove off the pole and went looking for the fallen rat. 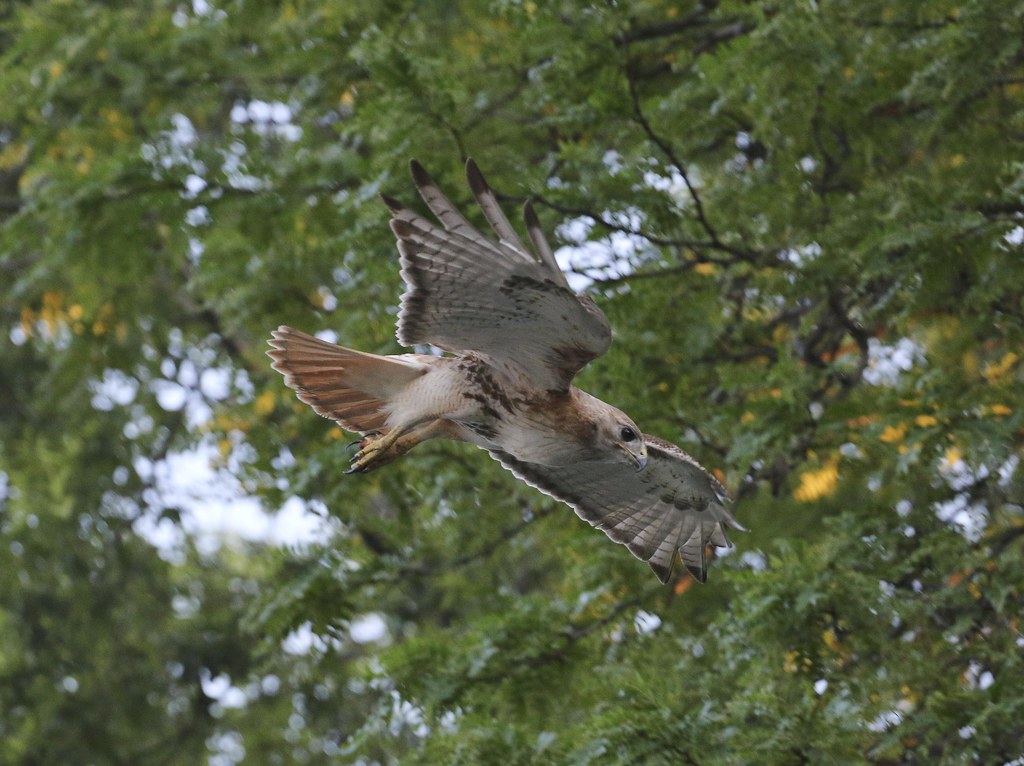 Ugh, those clumsy kids - must I do everything?! 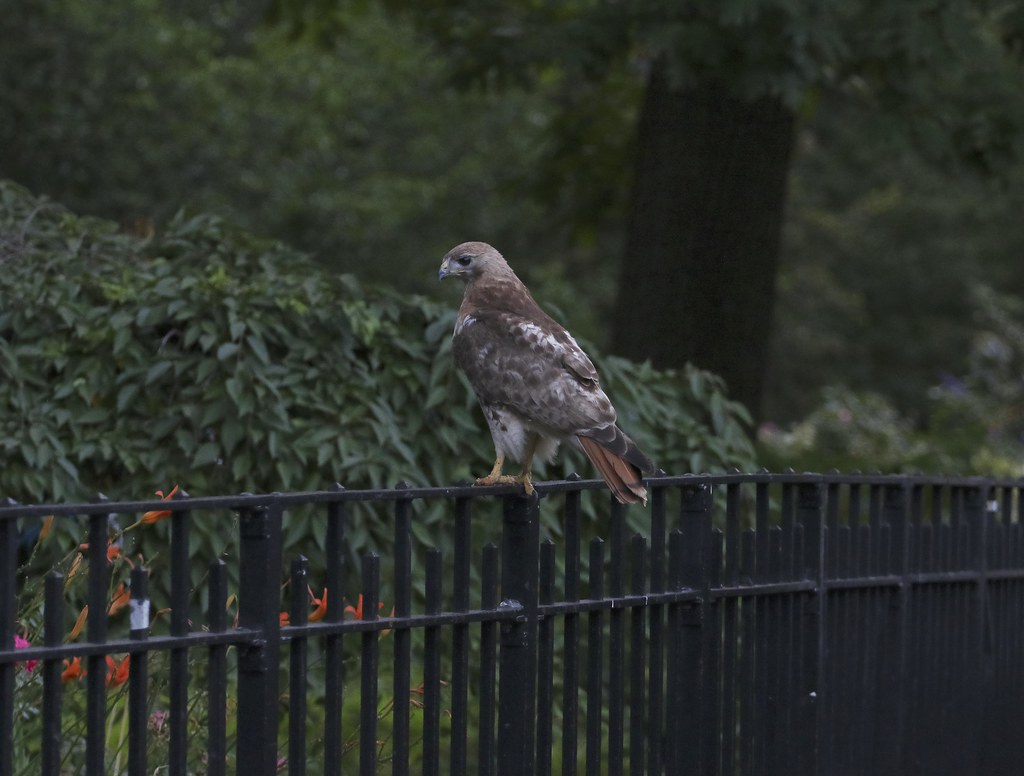 After some poking around in the bushes, he found it. 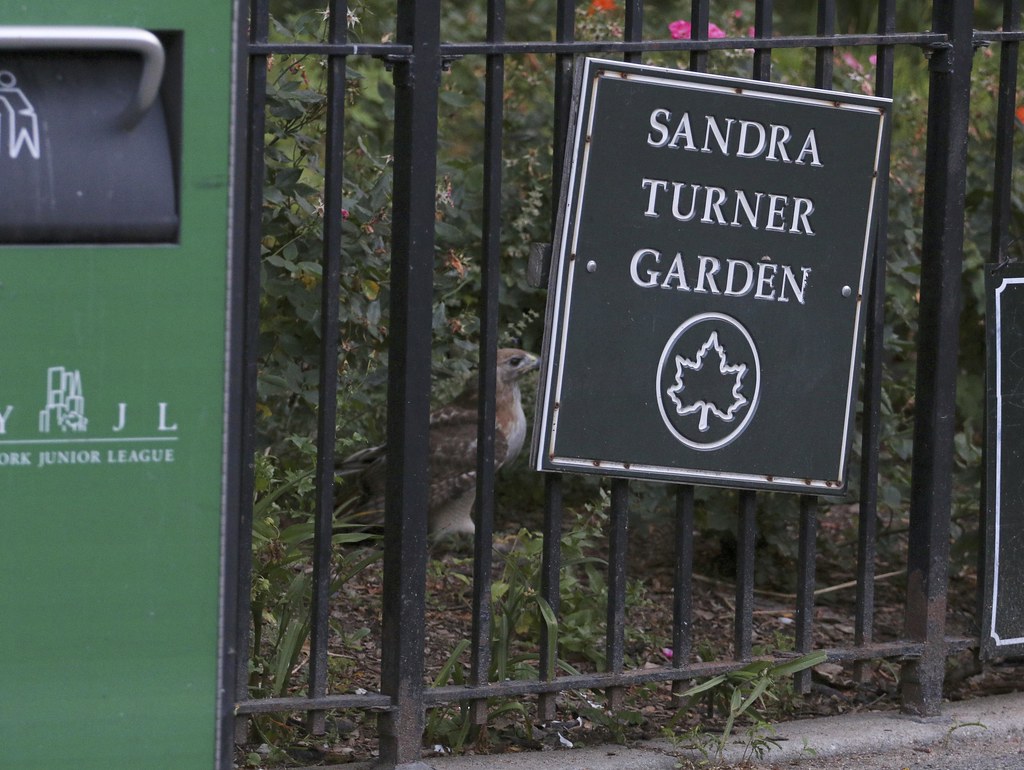 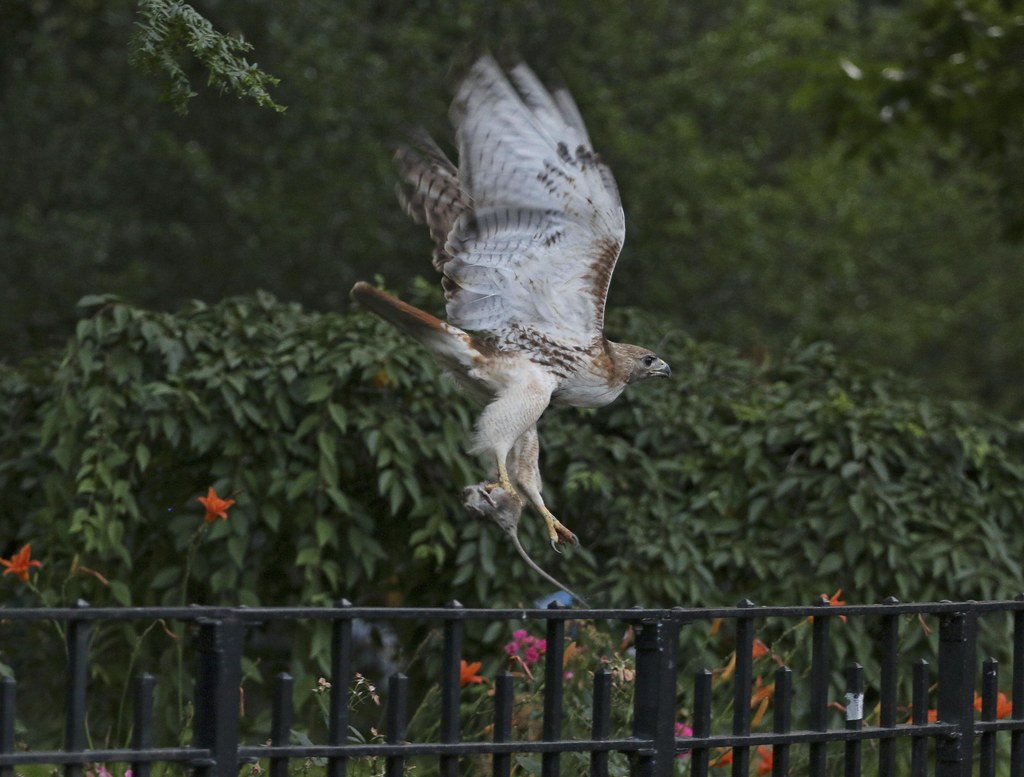 And flew away from the fledgling... 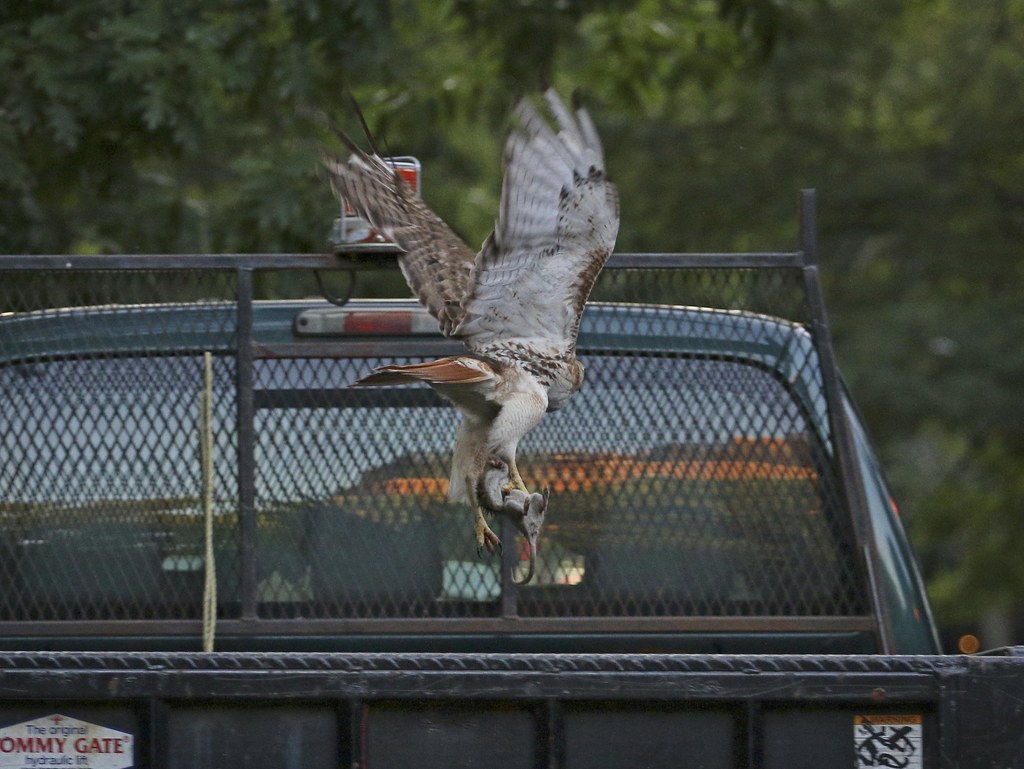 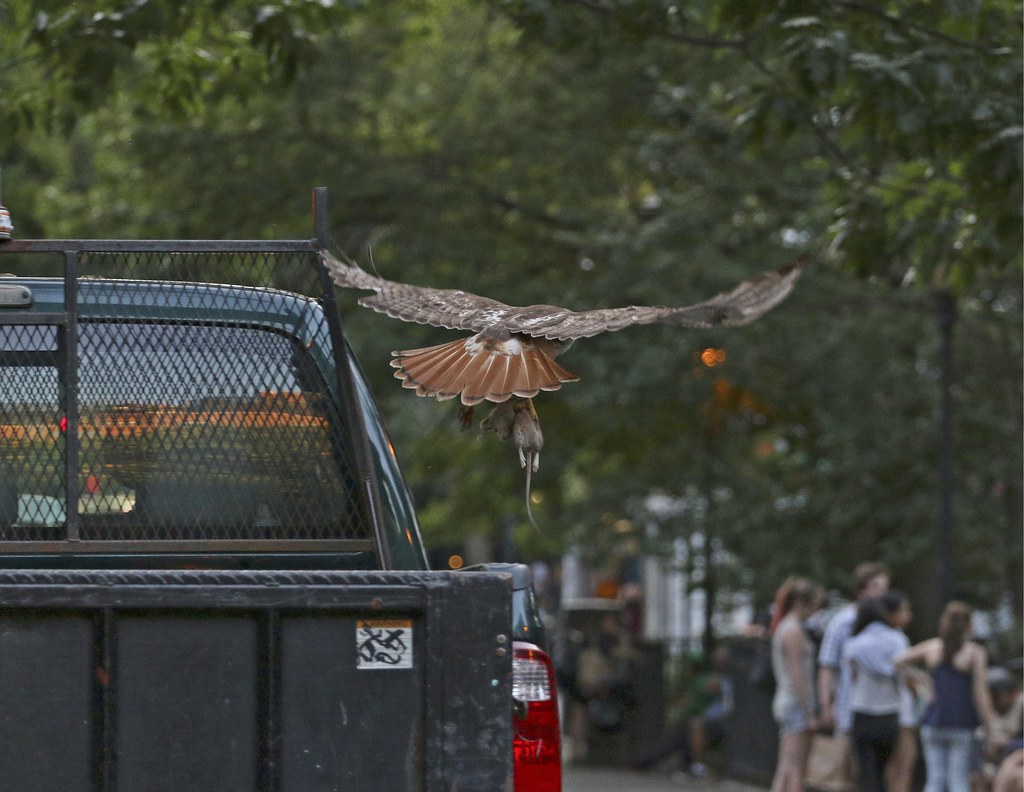 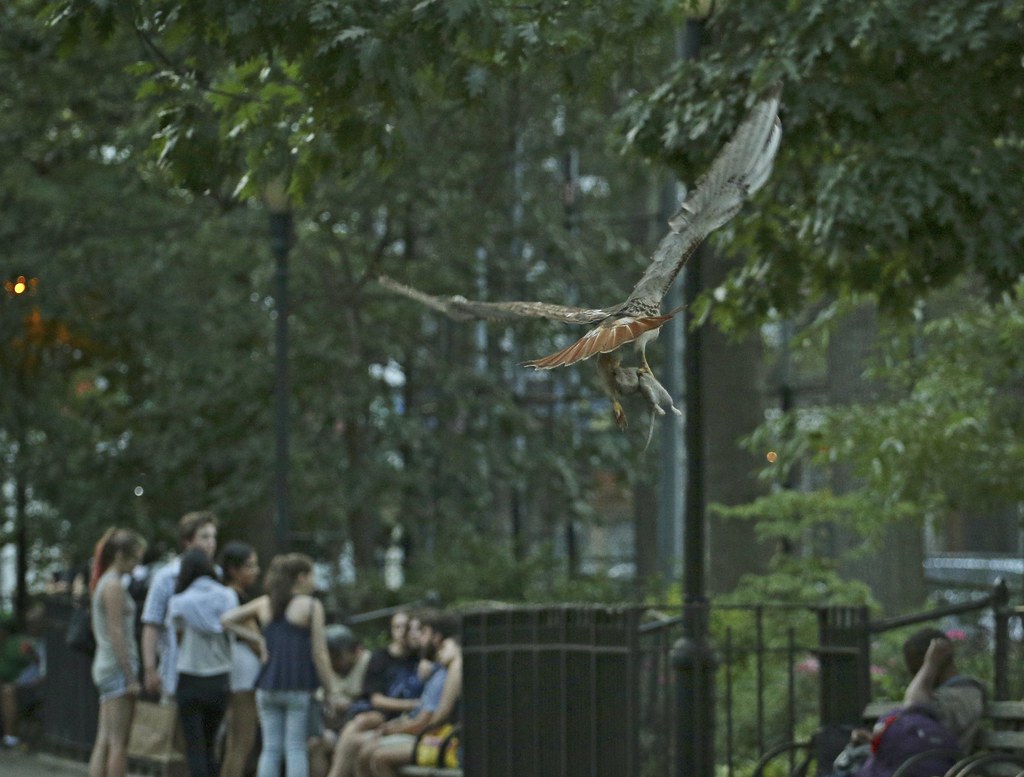 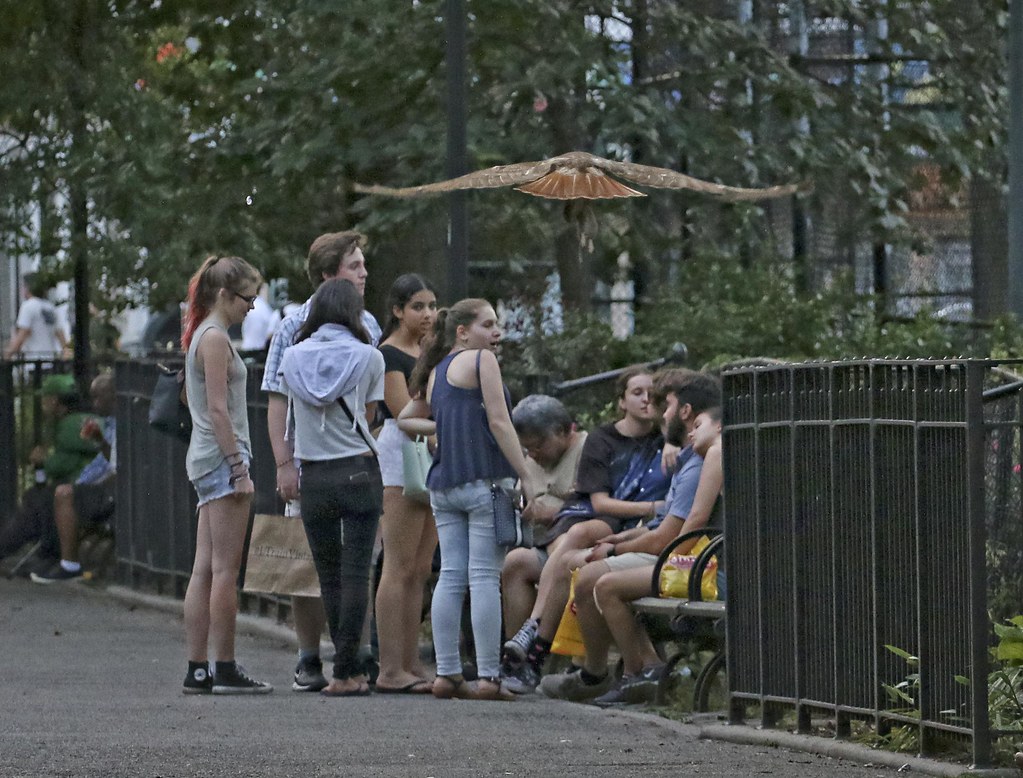 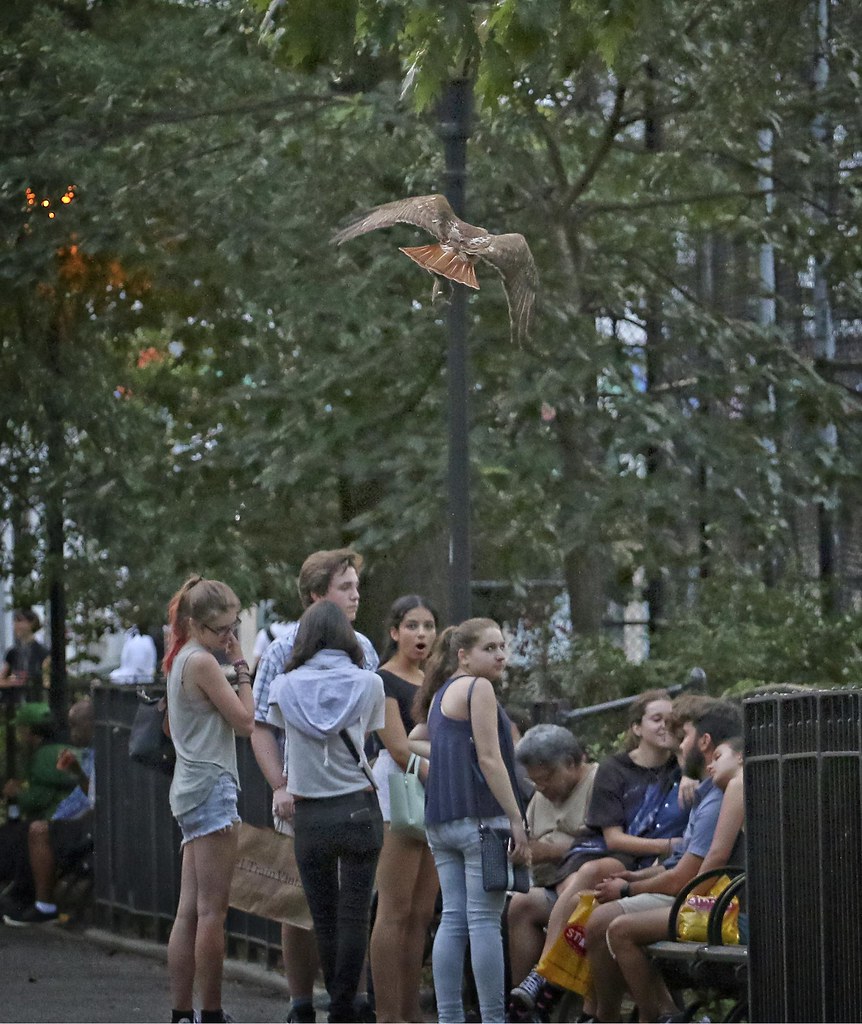 In the end, Christo took the rat to a bigger tree with a wider branch that made it easier for his kid to eat and not drop the food.  I admired how Christo performed this task so patiently, keeping a close eye on his kid and making sure it ate enough.

Last week, one of the fledglings dropped a pigeon and I wondered if it would be abandoned.  A fellow hawk-watcher later told me that Christo eventually did go back and retrieve the pigeon.  Both parents are making sure no food goes to waste.