Christo has little patience for kids on his turf

Winter has always seen a number of immature red-tailed hawks migrating through the neighborhood, but this season, without Dora to help defend the territory, it seems more than usual are being seen in/near Tompkins Square.

On Christmas Day, one spent the entire afternoon on a fire escape on Avenue A before eventually being chased away by Christo and Nora.  Three days later, I came across another young hawk who was hanging out in the park along 10th Street. 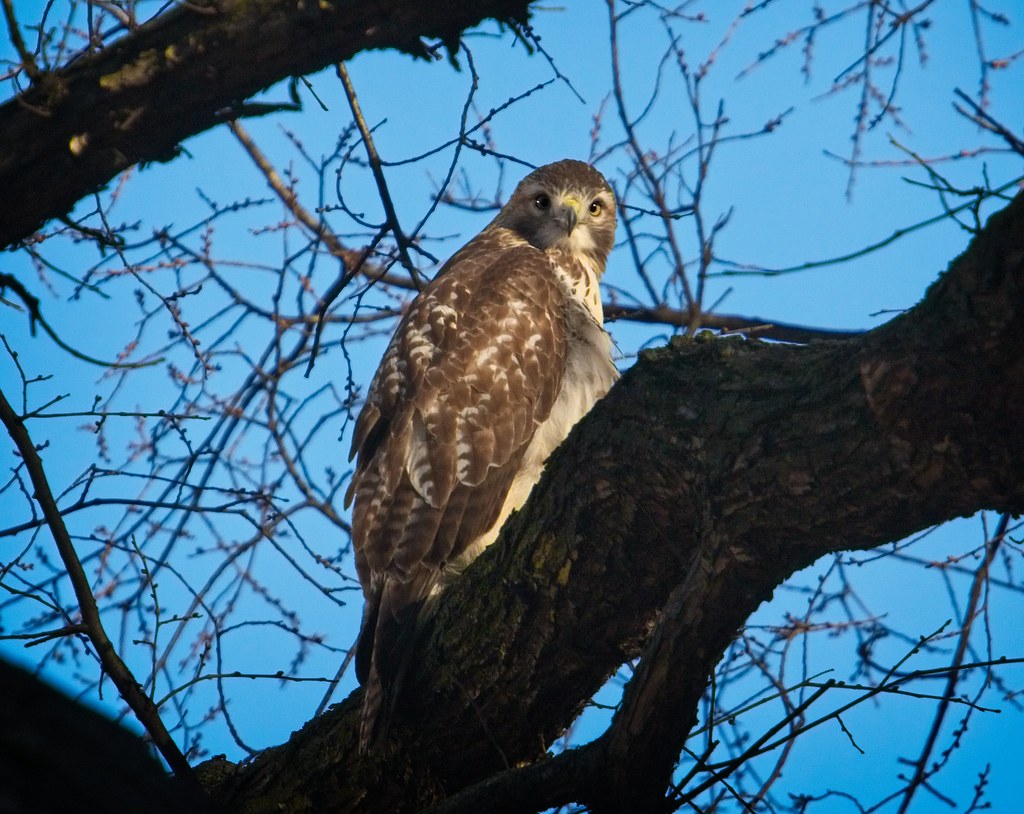 The hawk flew to a fire escape on the north side of the street near Avenue B. 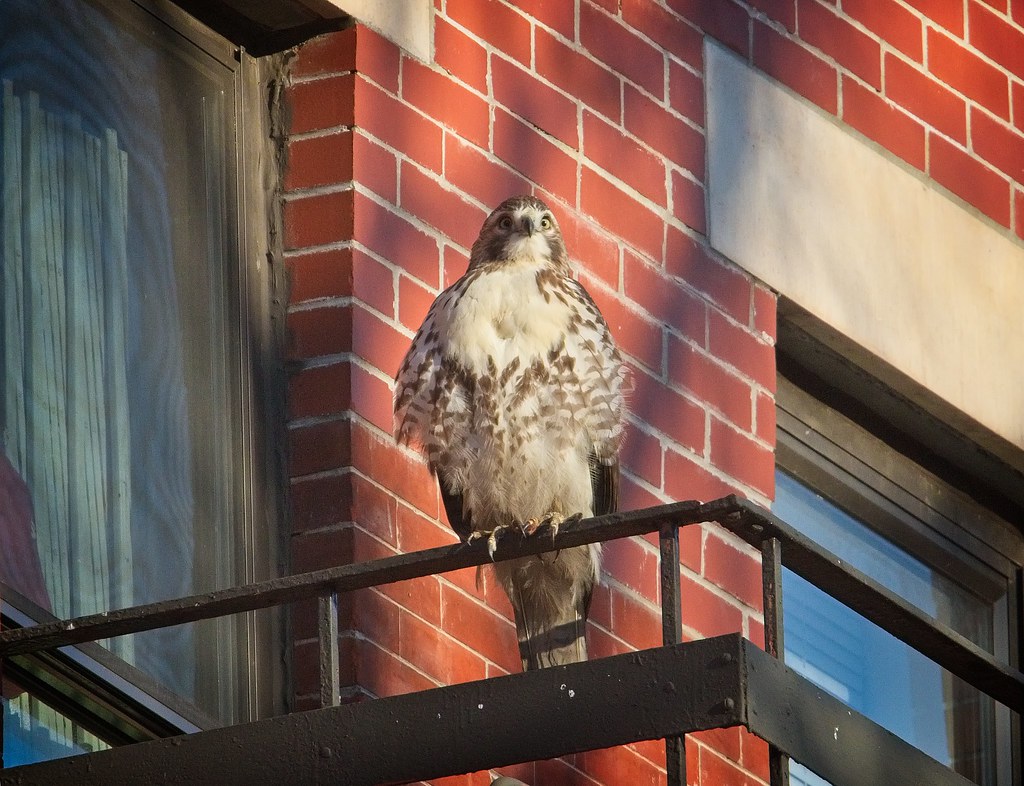 From there, it decided to check out an air-conditioner. 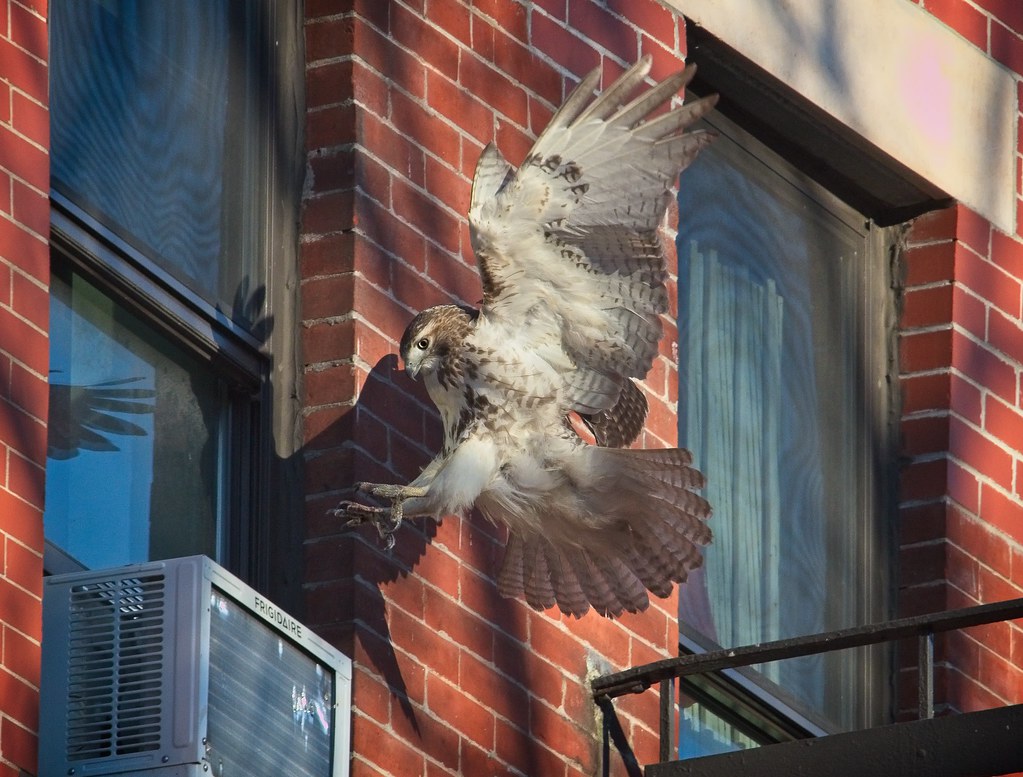 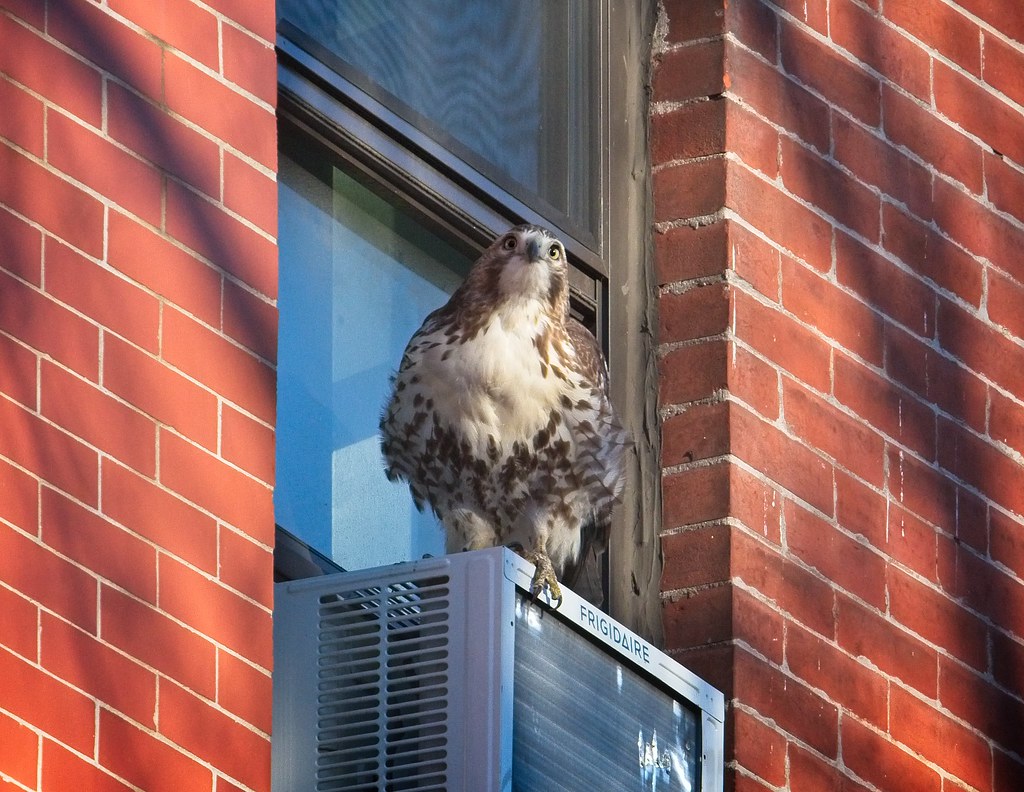 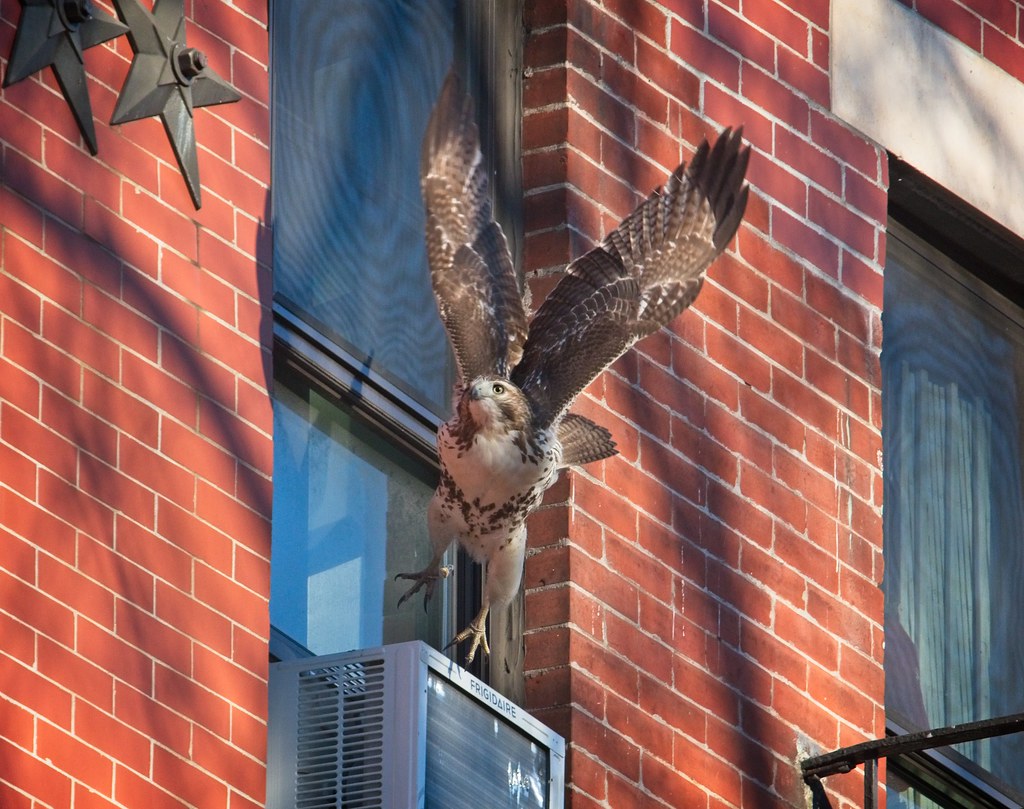 The hawk then went systematically to each window down the row, landing either on a fire escape or an air-conditioner. 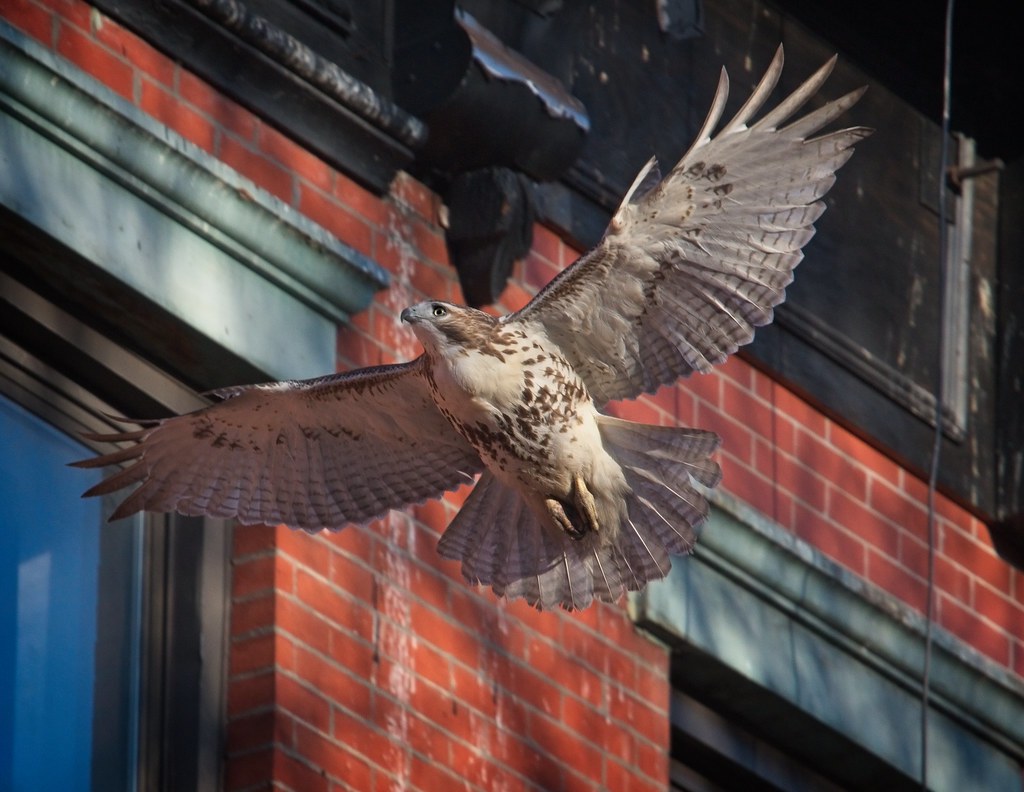 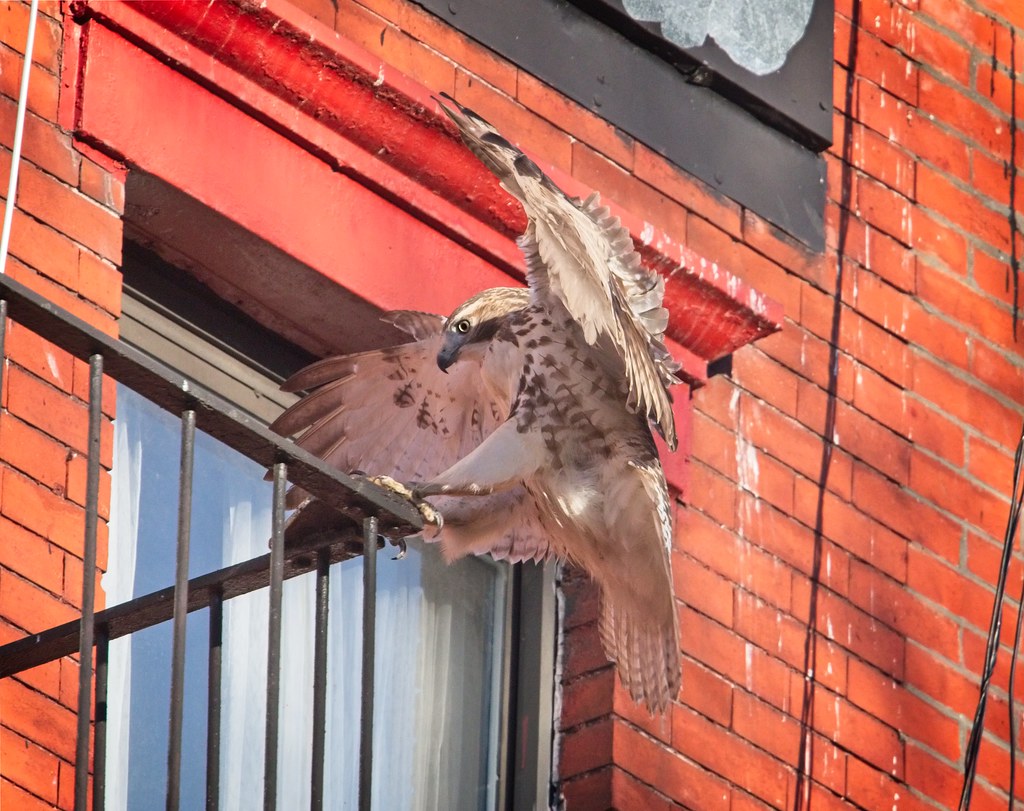 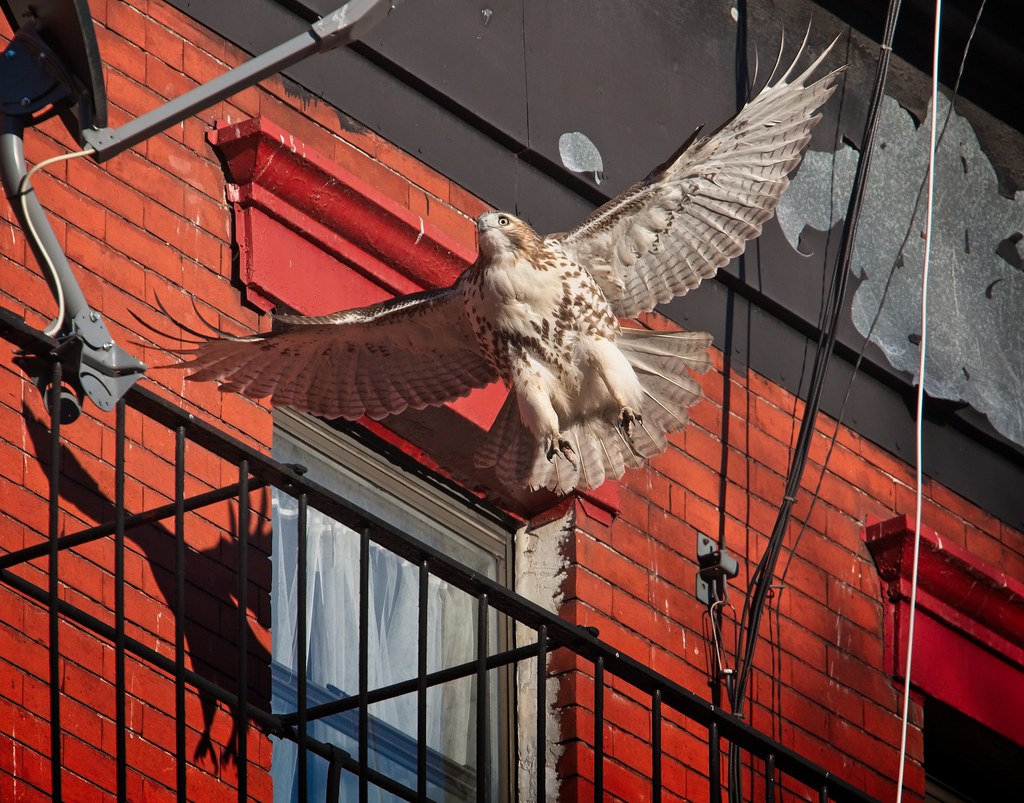 It even investigated a satellite dish! 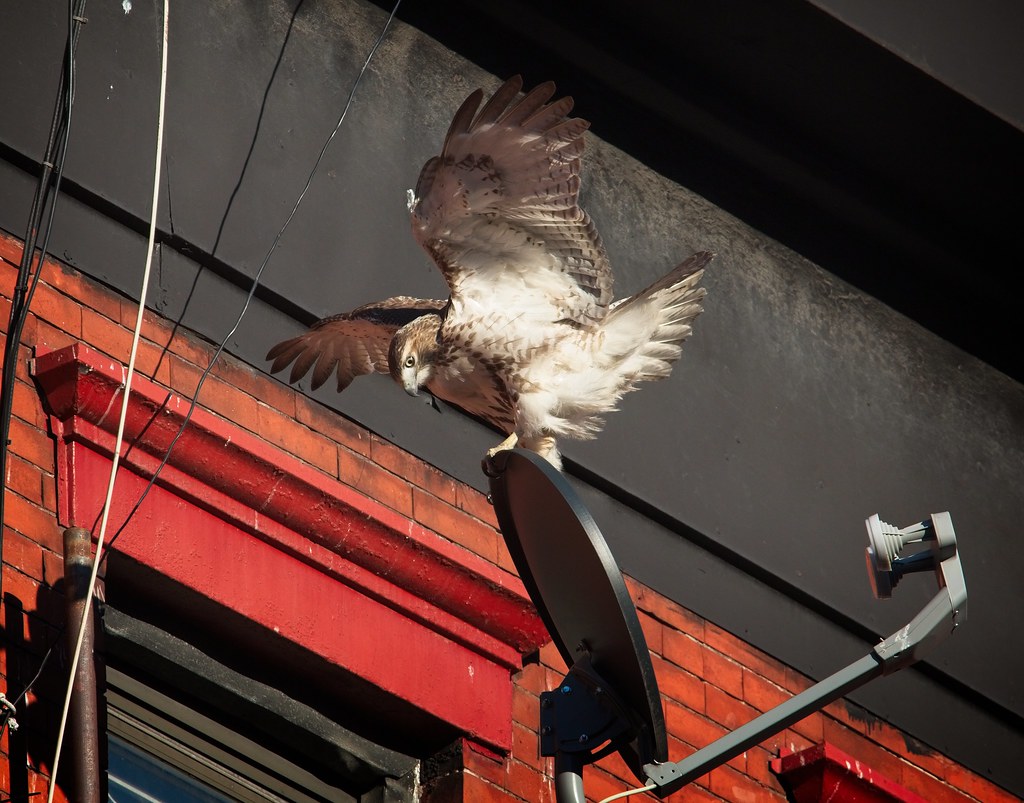 I wonder if the residents of this apartment experienced bad reception at the time. 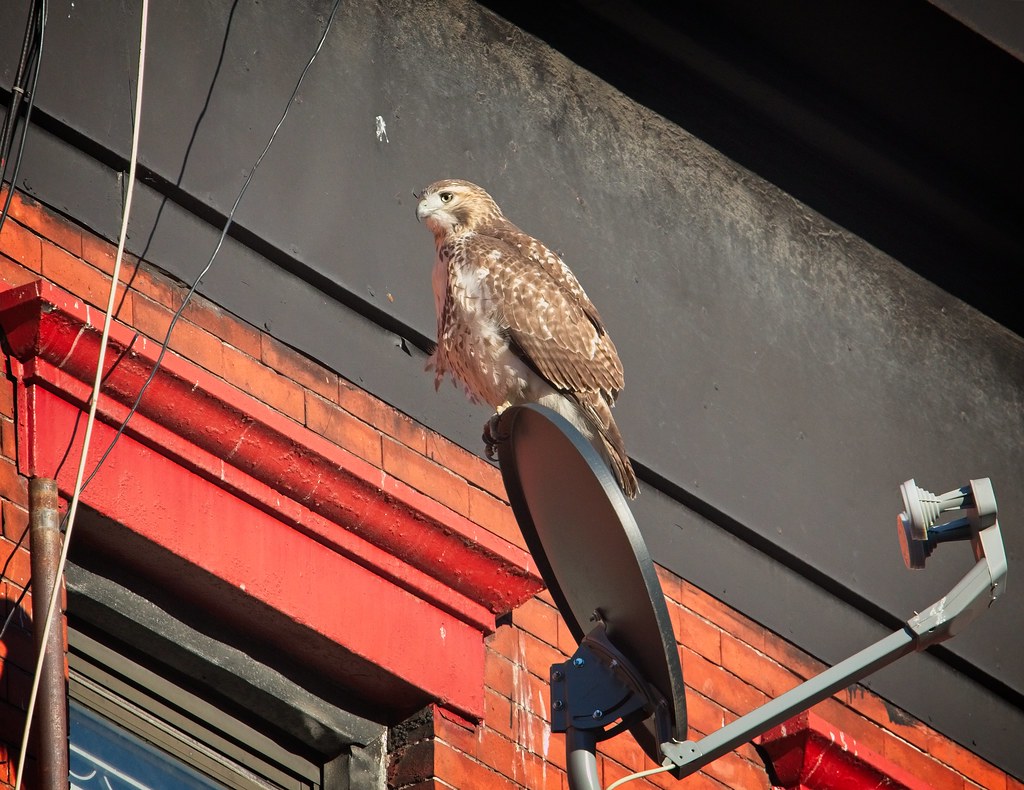 At this air-conditioner, the hawk's purpose became clear when it pulled up an old frozen rat with its talon.  If you look closely, you can see there is some fur under the hawk's foot and the rat's tail is sticking out from beneath the hawk near the left corner of the air-conditioner. 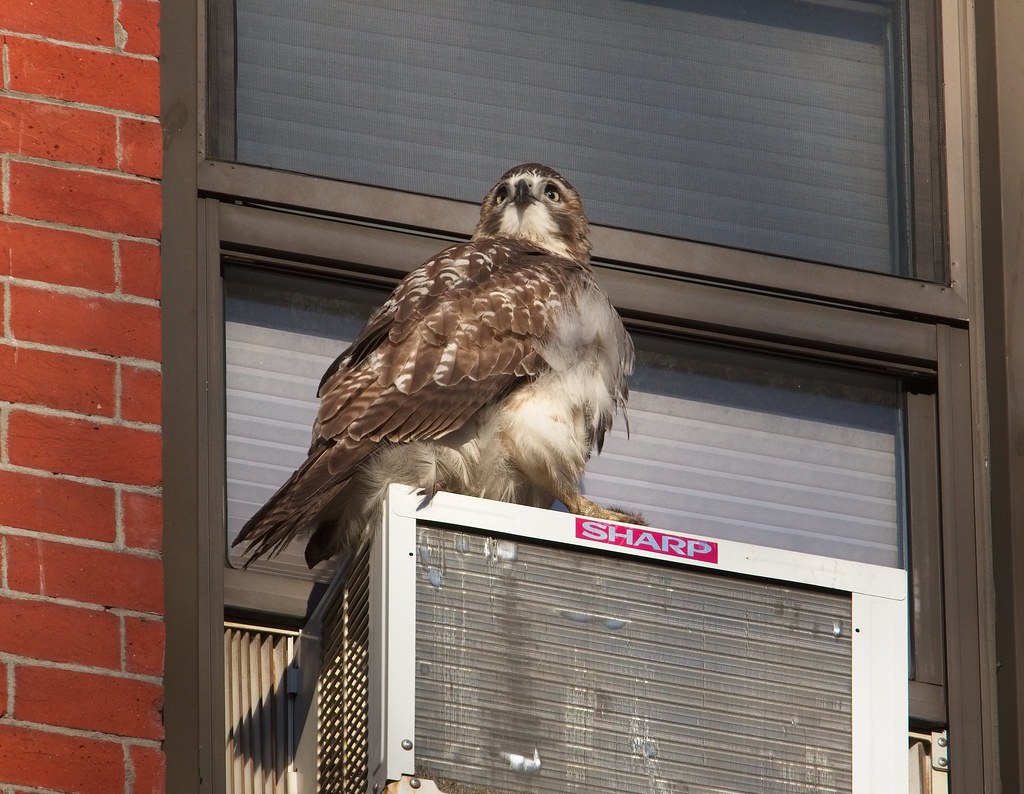 Although the photos may look warm, this day was really cold - I think the high was ten degrees - and the old dead rat was frozen solid.  Unable to deal with it, the hawk flew down to the ground at the edge of the park and poked around for prey under some bushes. 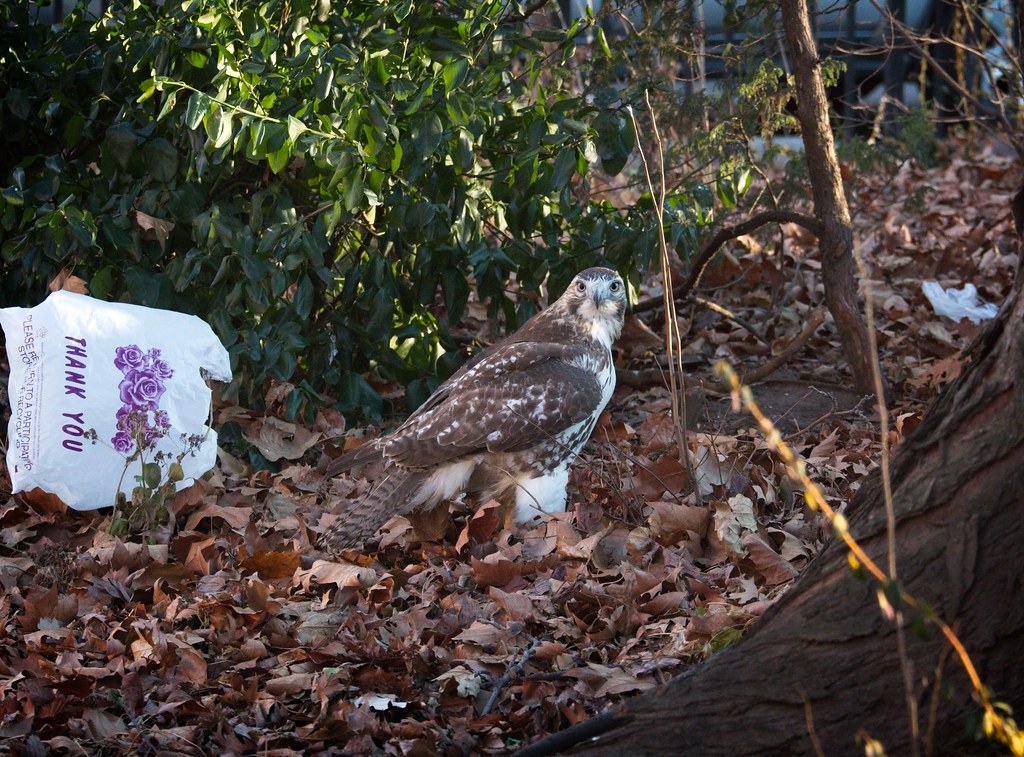 It was at this point that Christo appeared and expressed his displeasure.  He shrieked loudly and chased the young hawk around the basketball courts.  In the photo below, Christo is on the big branch on the upper left, glaring down at the youngster on the lower right. 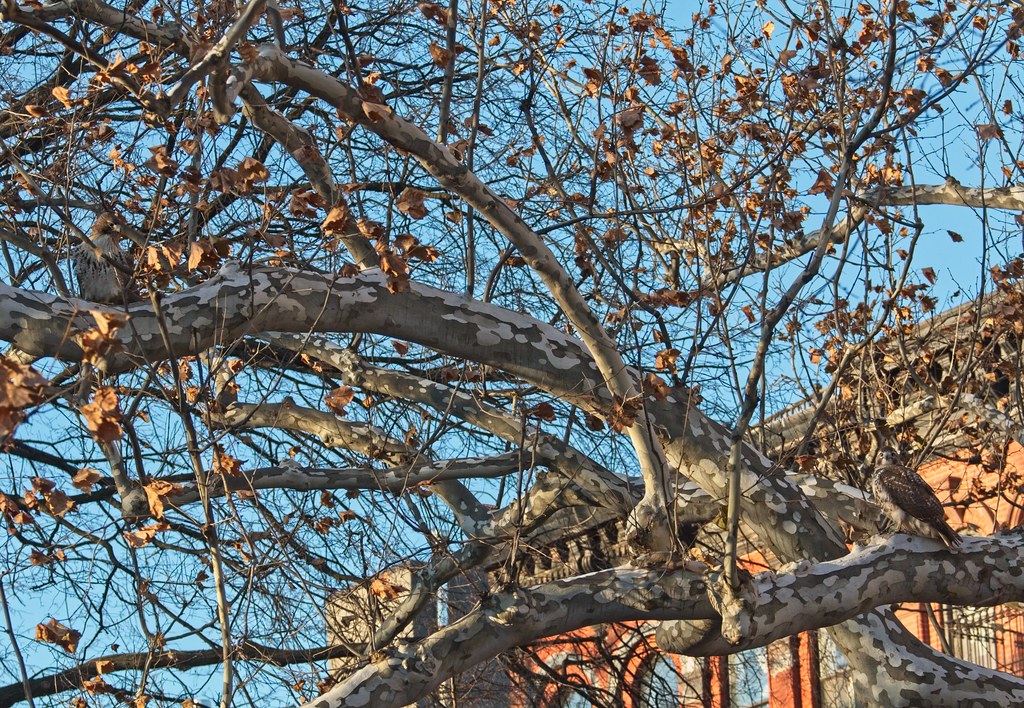 The young hawk began begging Christo, chirping at him as the kids do when they want food. 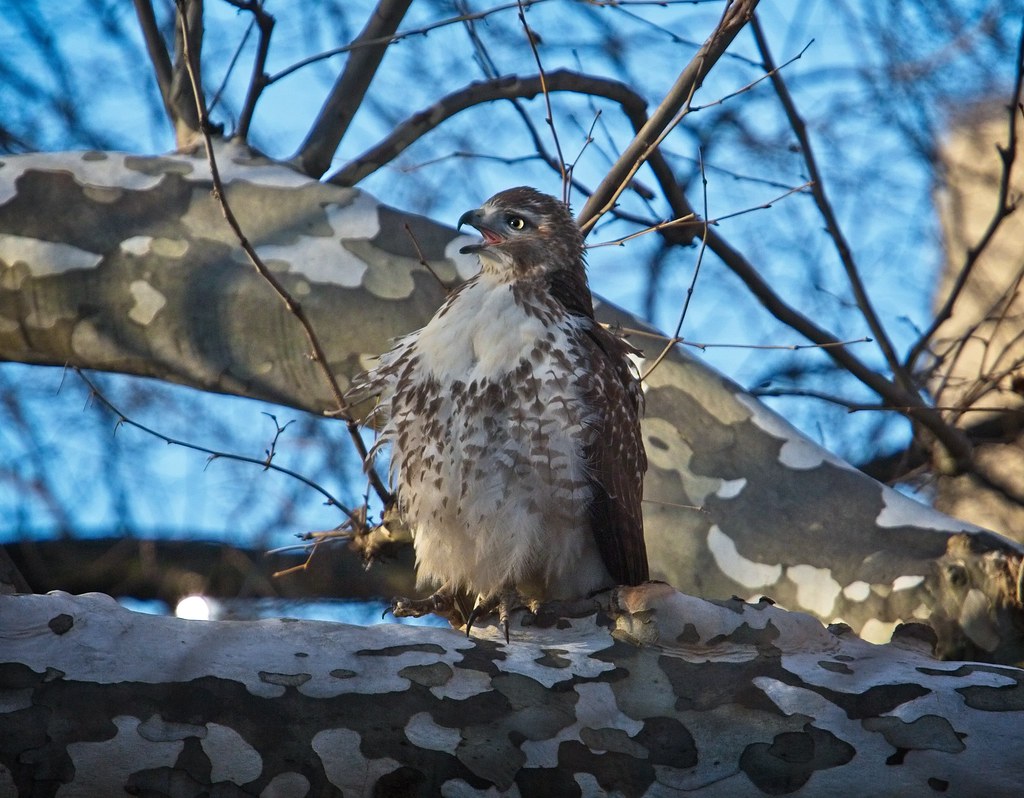 My first thought was this hawk could be Christo's offspring.  Could it be Ten?  However, I compared photos and this hawk has white legs while Ten had spotted legs, so it is not her.  Their tails are also different. So, I found it really interesting that this young hawk would beg a stranger for food. I guess the kids see any adult as a food source.

Christo was not having any of it!  He took an aggressive stance and lunged at the young hawk several times.  I tried to take video, but it was so cold out, my video camera kept freezing and shutting down.  So, I dug out a video I took in the park in 2013 of another adult red-tail attacking a begging immature hawk:

I felt bad for the young hawk as I'd grown pretty fond of it by now (I'd been with it all afternoon) and it kept displaying such energetic optimism.  In the photo below, the eager young hawk is on the left while Christo is on the right looking surly. 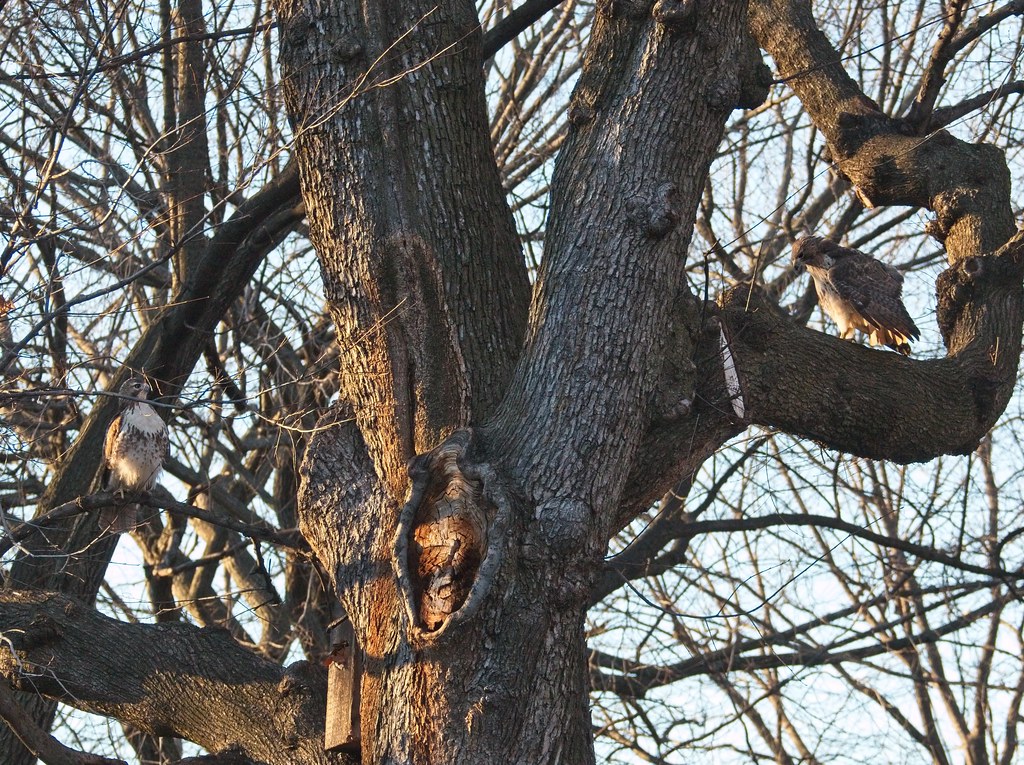 In the end, Christo chased the kid back across the street to a fire escape, but even that wasn't good enough.  Christo attacked it there (my camera froze as I tried to get a shot!) and chased it over the buildings towards 11th Street. 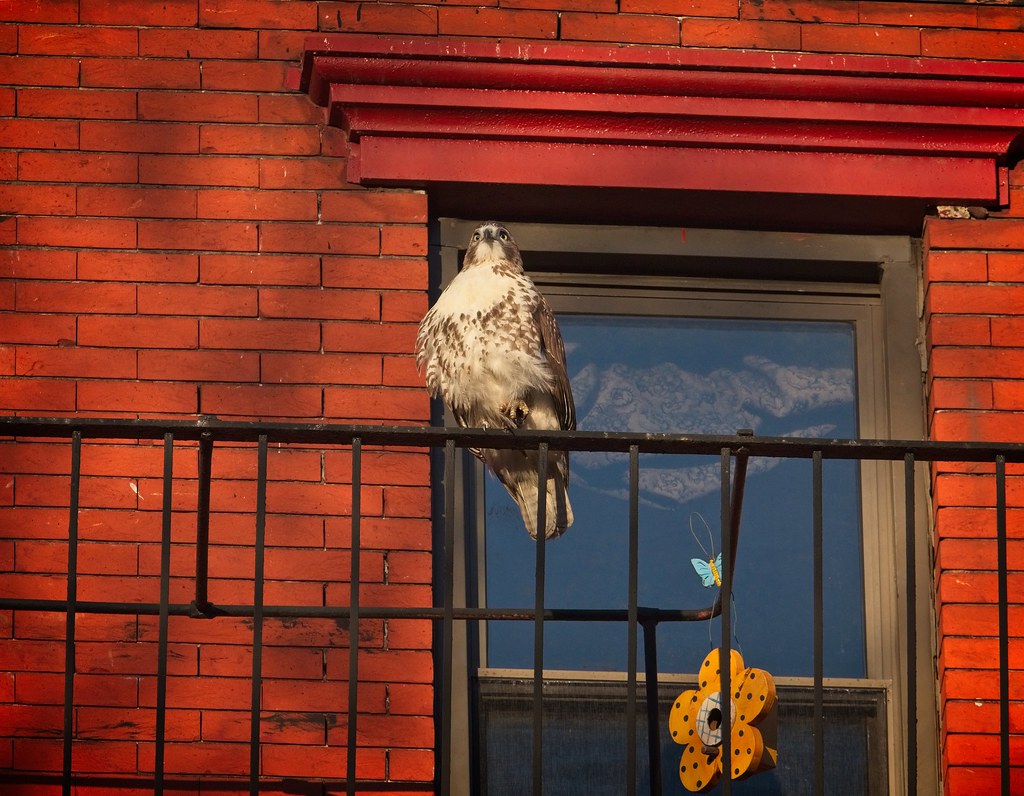 Christo then returned to 10th Street at sunset and roosted on a building by the library. I got the feeling he was keeping guard.

Since Dora has been away, Christo has had a lot of responsibility defending the park all on his own.  I've seen Nora help out a few times, but Christo has definitely had to be more aggressive lately. I even saw him chase her out of the park the other day when she dared to eat near him. It's still not really clear what's going on between those two, but I've been feeling bad for Christo as he has to deal with this new situation.