Hawk rescue on the Lower East Side

I went out for a casual walk at lunch today, hoping I might glimpse a hawk.  I returned to the area where I've previously seen kestrels and, more recently, a young light-eyed red-tailed hawk.

I'd been looking in the trees, so I was surprised to see the very hawk I was seeking sitting in the grass. 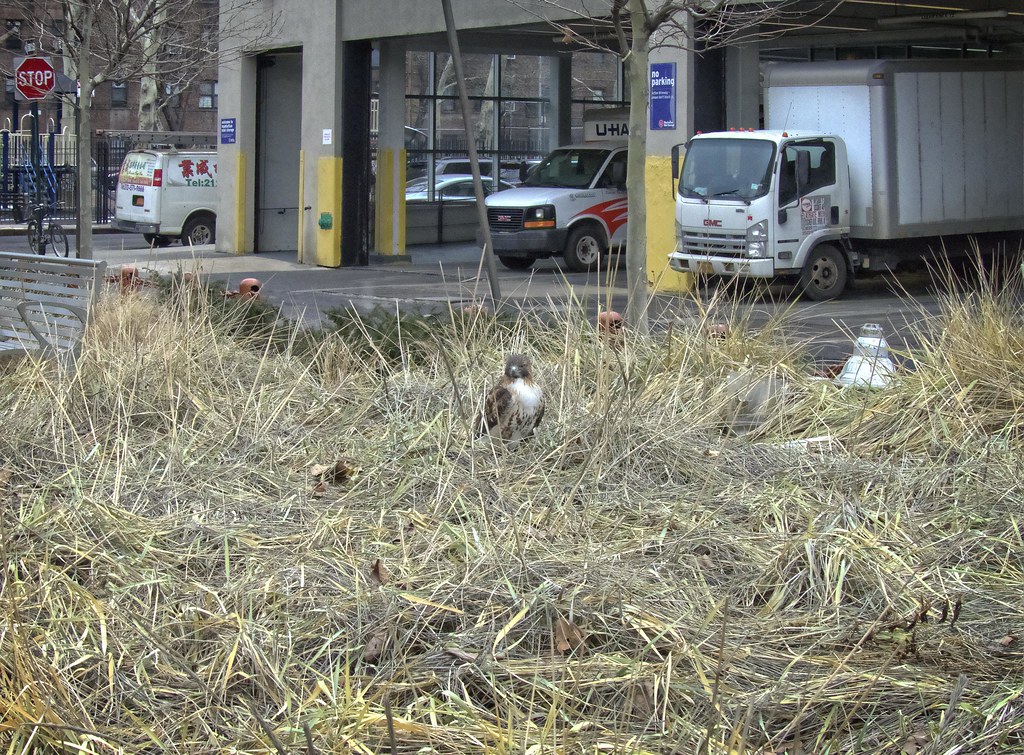 My first thought was it had caught a mouse or rat. 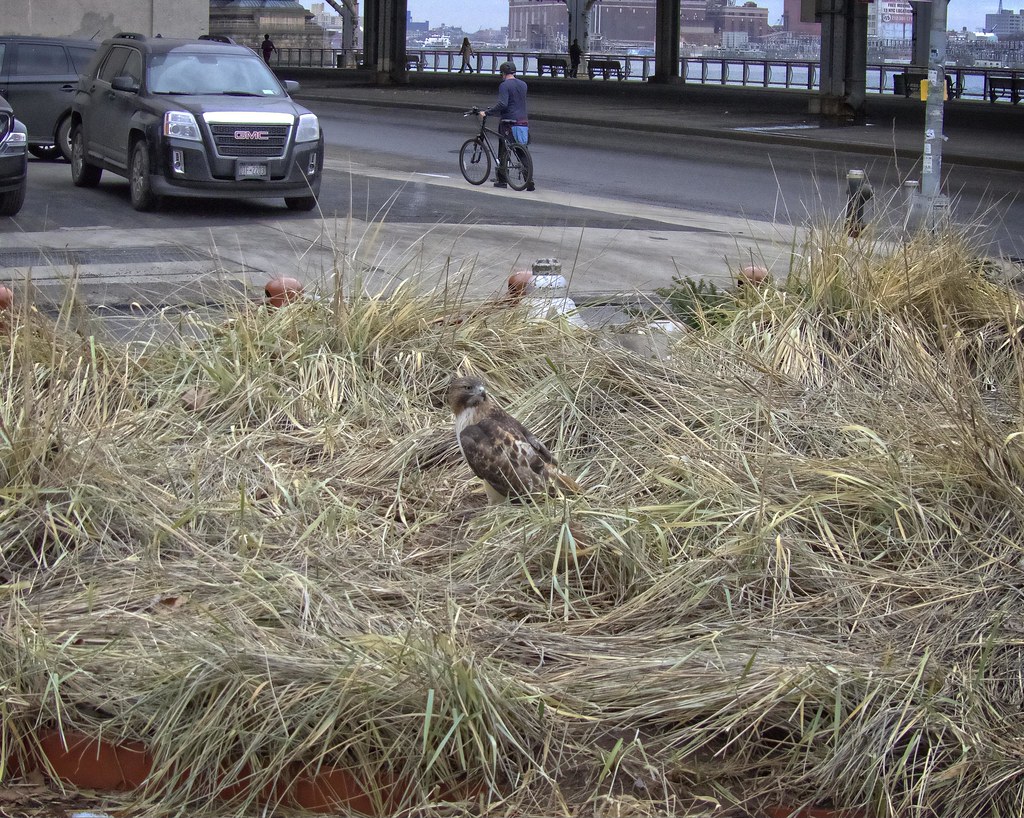 The hawk was so calm, it attracted a small crowd. 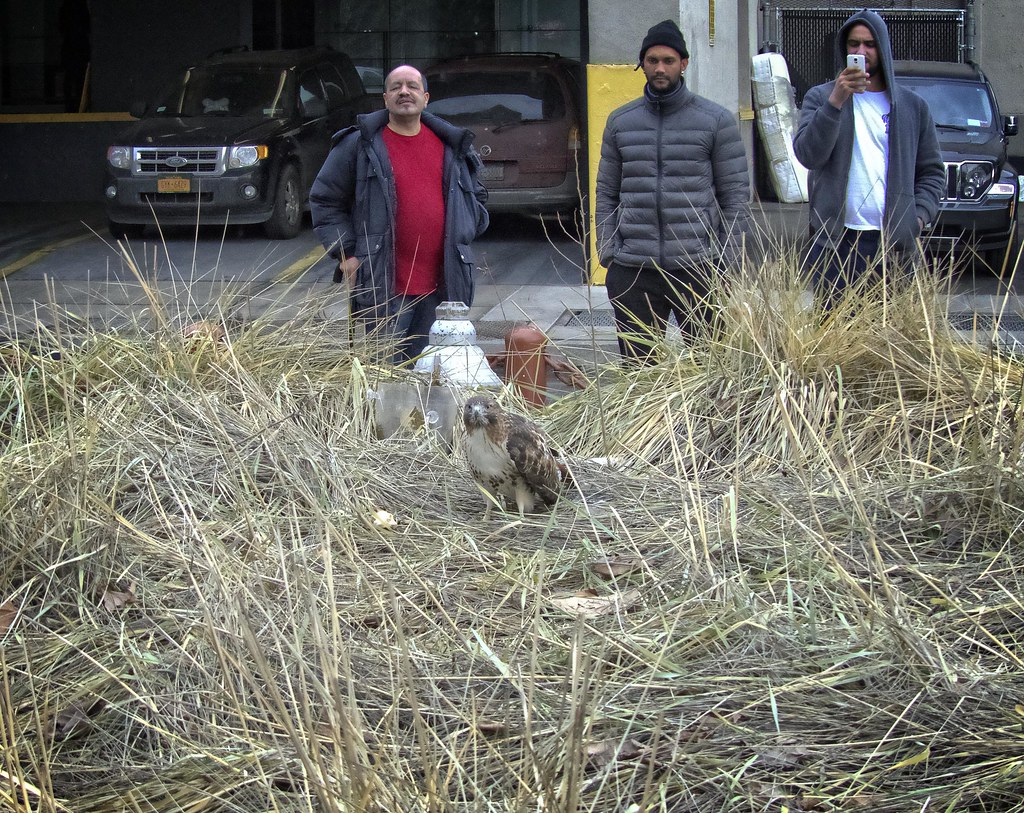 It's lack of reaction to people made me think twice.  Was it really sitting on prey?  If so, why wasn't the hawk flying away?  Juvenile hawks often run around on the ground, but it's more unusual that an adult would spend so much time sitting still like this.

The hawk was alert with open eyes, and it kept looking around at birds and other moving objects,  but it remained in place for way too long. 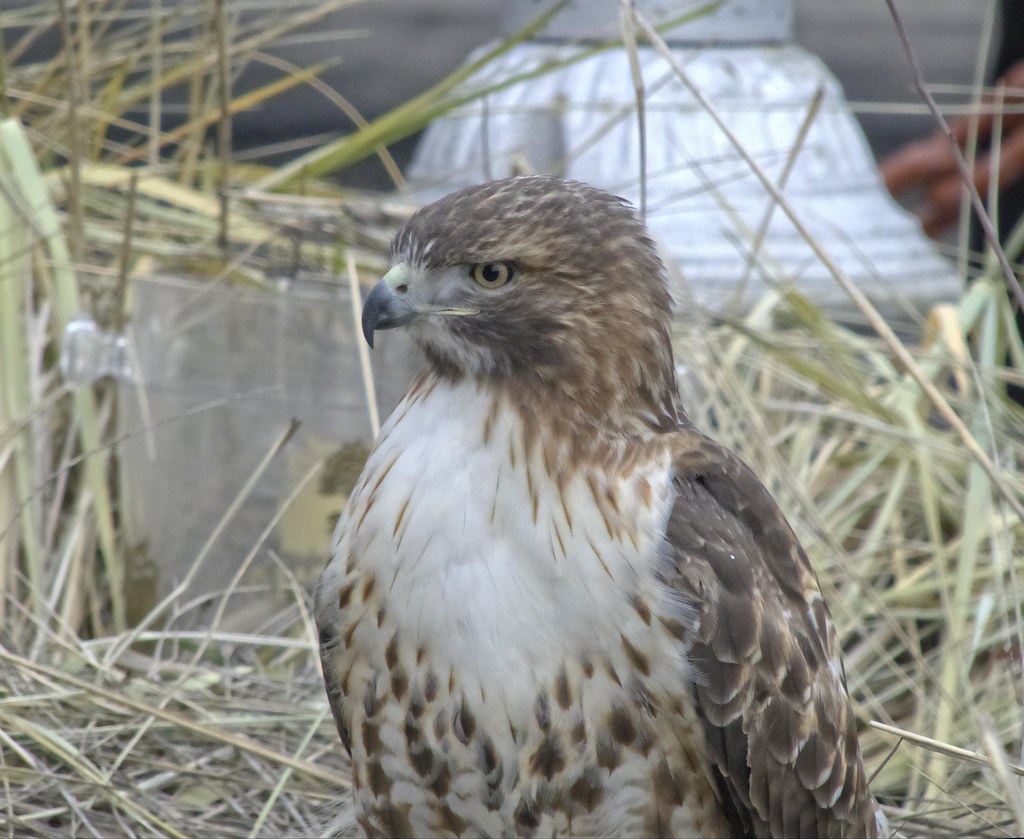 After about 20 minutes, I started trying to contact people for help.  I still wasn't sure if there was actually anything wrong with the bird.  But, then, it tried to take off and could not.  I thought maybe its talons were stuck in the grass, but the hawk lifted both feet, so that wasn't the problem.

Then I could see something wrong with its left wing. 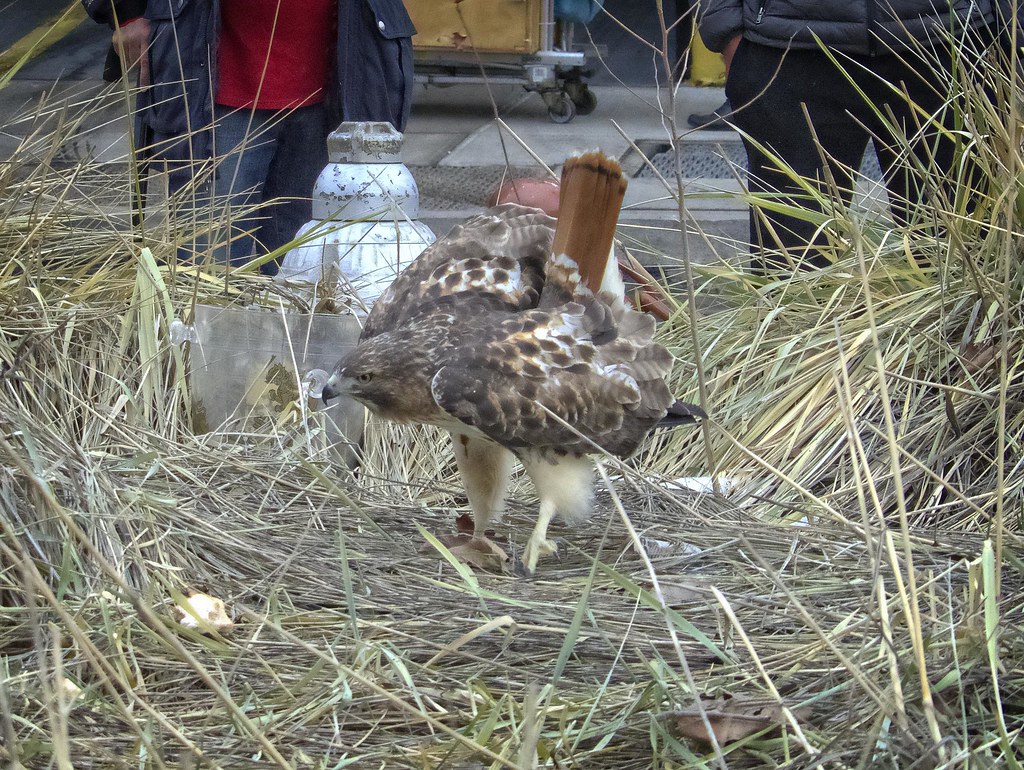 The hawk could flap its right wing, but was unable to lift the left, and just stumbled around in the grass. 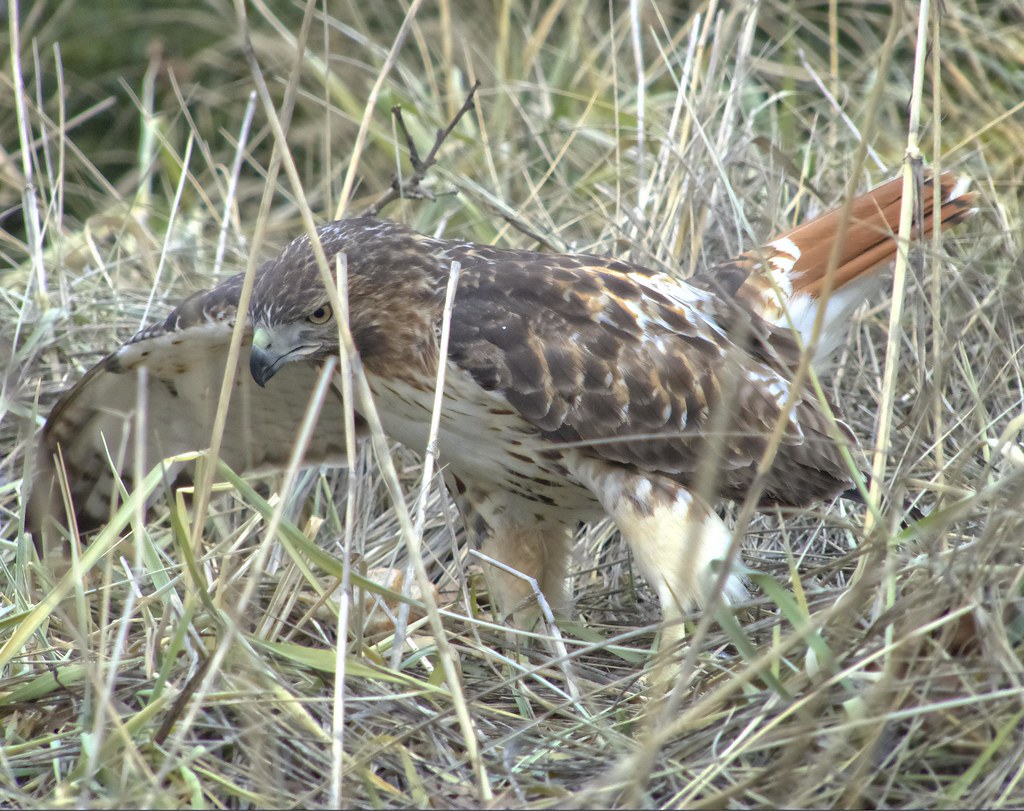 Our friend Jean, a fellow hawk-watcher, showed up to help and was able to reach Bobby from WINORR (Wildlife in Need of Rescue and Rehabilitation), who was able to quickly net the hawk and give it an examination.  By this time, the hawk had been on the ground for at least four hours. 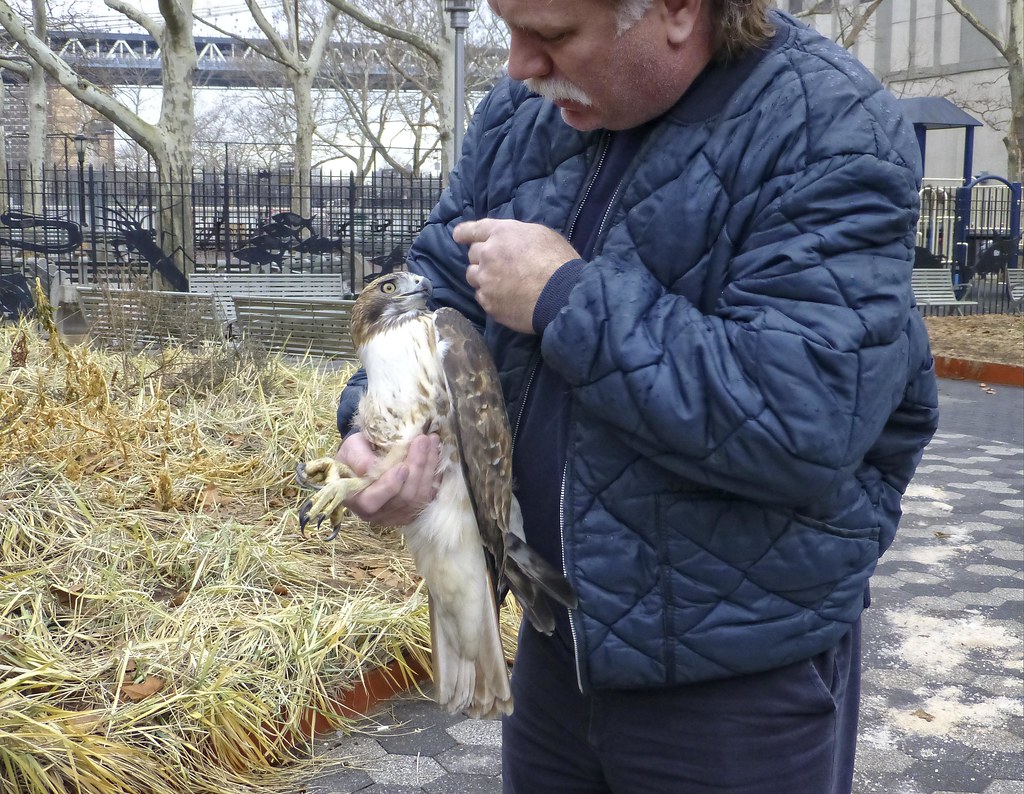 Bobby was recently in the news for rescuing an injured hawk from an air-conditioner on Canal Street.  He was able to confirm that this hawk is a young male, but did not have any obvious signs of injury. 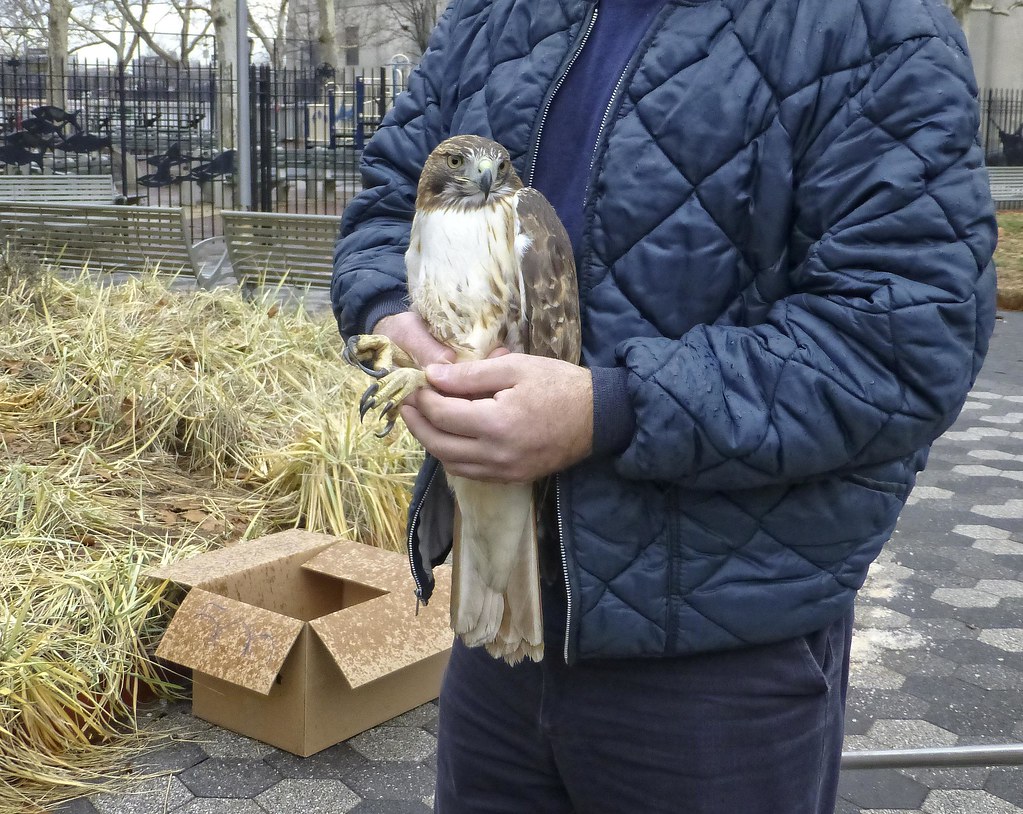 As the hawk was unable to fly, Bobby took it with him for further examination and rehab.  I have high hopes that this hawk will be ok and back to the Lower East Side soon. 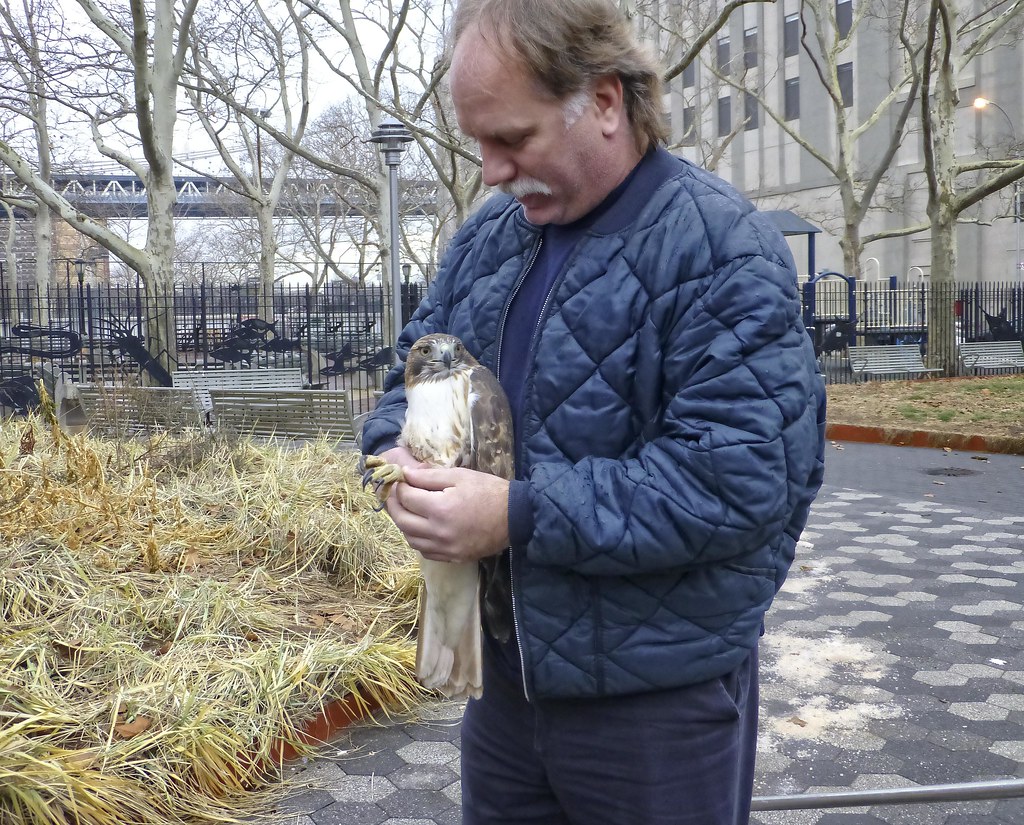 Here is video of Bobby checking out the hawk.

WINORR does so much wonderful work for our local raptors and animals.  They have hearts of gold and it's hard to say what could have happened to this hawk if Bobby hadn't come to the rescue.   Thanks are not enough.

Please consider donating to WINORR.  They are non-profit and take care of these animals out of the kindness of their hearts.
Posted by Laura Goggin Photography at 9:28 PM