There's been some activity this week down at the 55 Water Street falcon nest box.  A fellow falcon-watcher notified me of their activity, so I went to take a look on Tuesday.  Sure enough, the female (she is apparently called Adele) was perched next to the box. 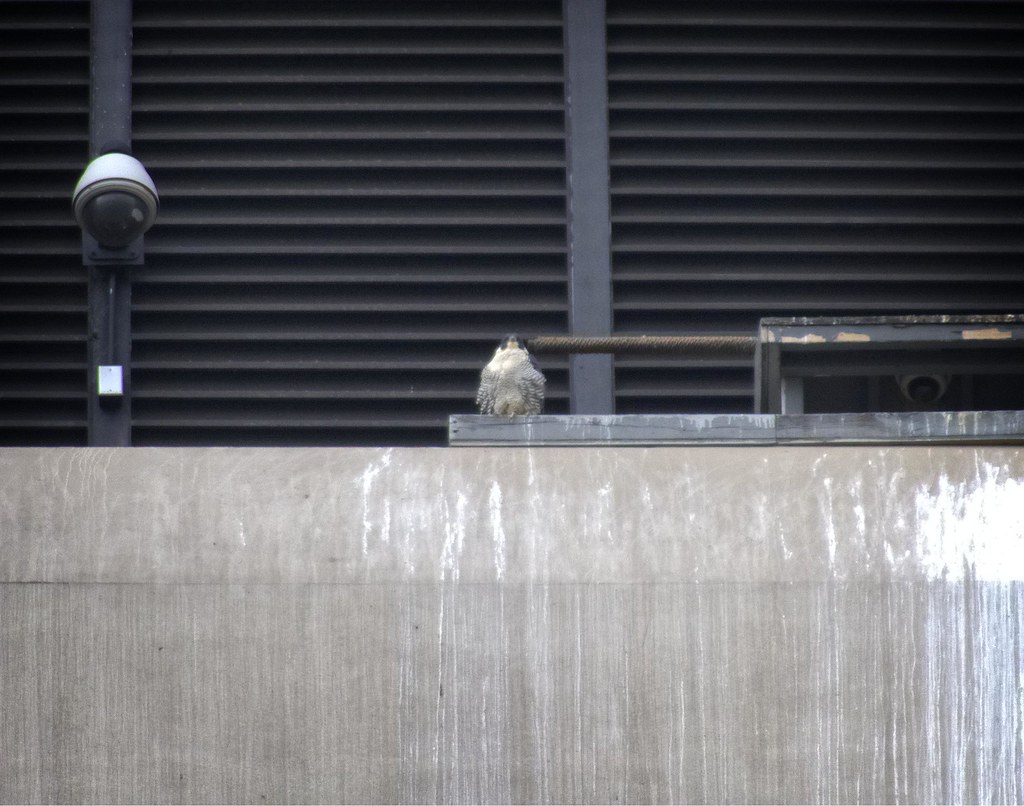 I took a walk and returned about 45 minutes later, but she was gone.  However, her mate (they call him Frank), was perched on the ledge of a building nearby.  As we watched, he dove from the building and shot down somewhere over Water Street.  Seconds later, the female swooped past the nest box.  Just as she did so, the male appeared about 20-30' out over the river with a pigeon.  Both falcons circled the water, rousing a flock of gulls.

It all happened so fast and I had an inadequate camera, so could not capture the action.  I did manage to get a couple of fuzzy shots of the male flying with the pigeon towards the Brooklyn Bridge. 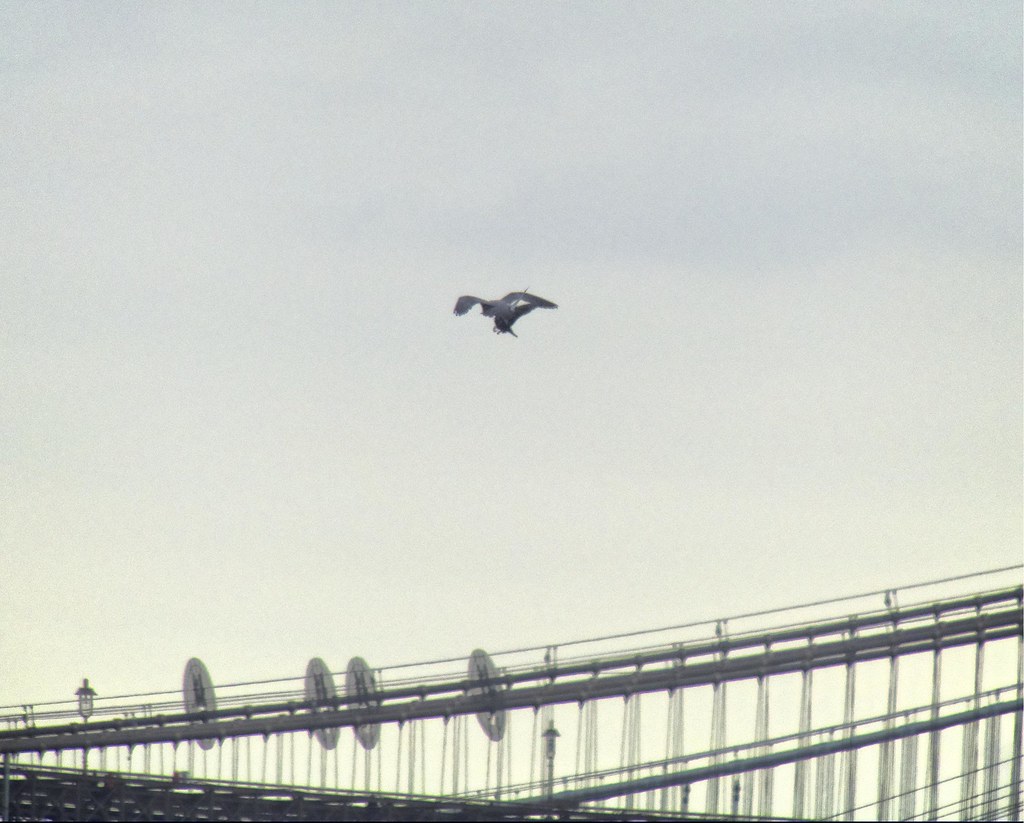 The Brooklyn and Manhattan Bridges are both visible here. 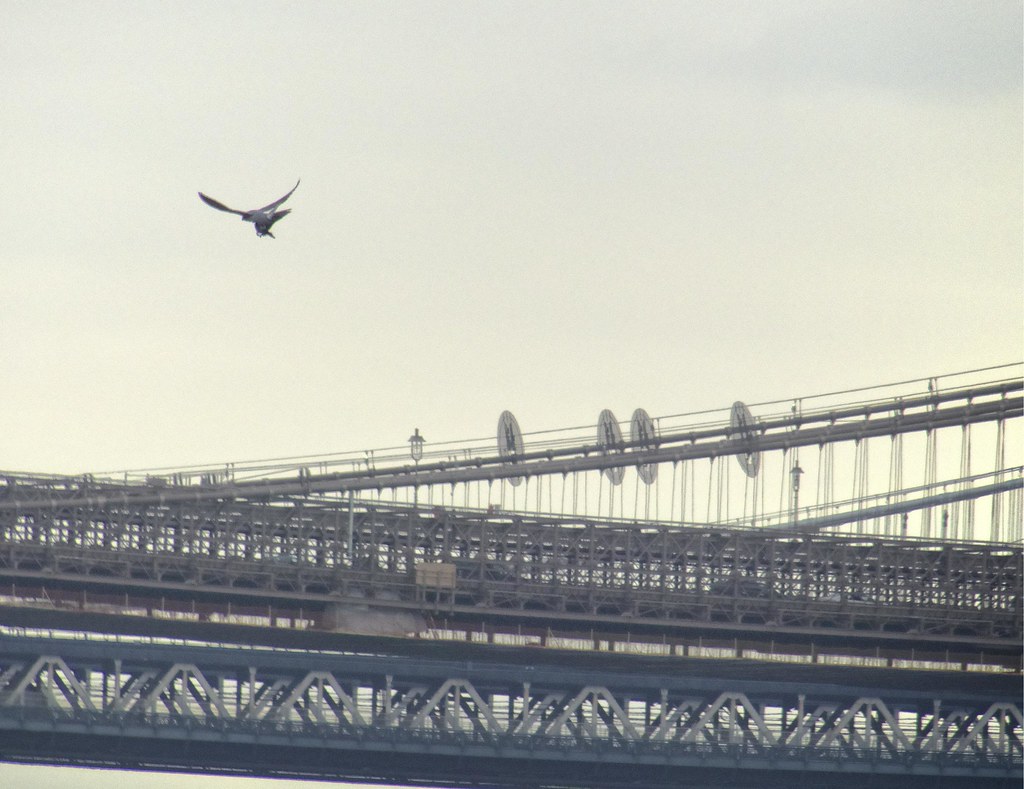 The flock of gulls (about 30 of them) chased the falcons around Pier 11.  In the chaos, the falcon dropped the pigeon in the water.  He tried to dive after it a couple of times, but could not compete with the gulls.  When it was over, both falcons went and perched on the rigging of the Peking at the Seaport. 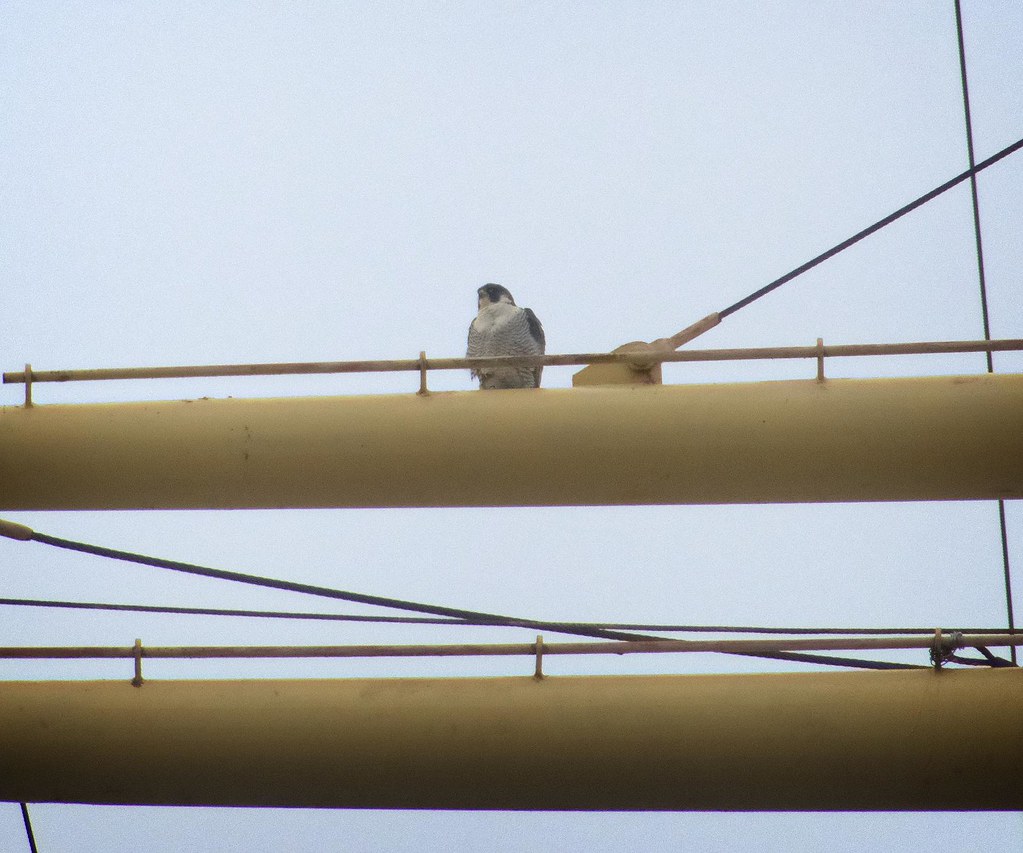 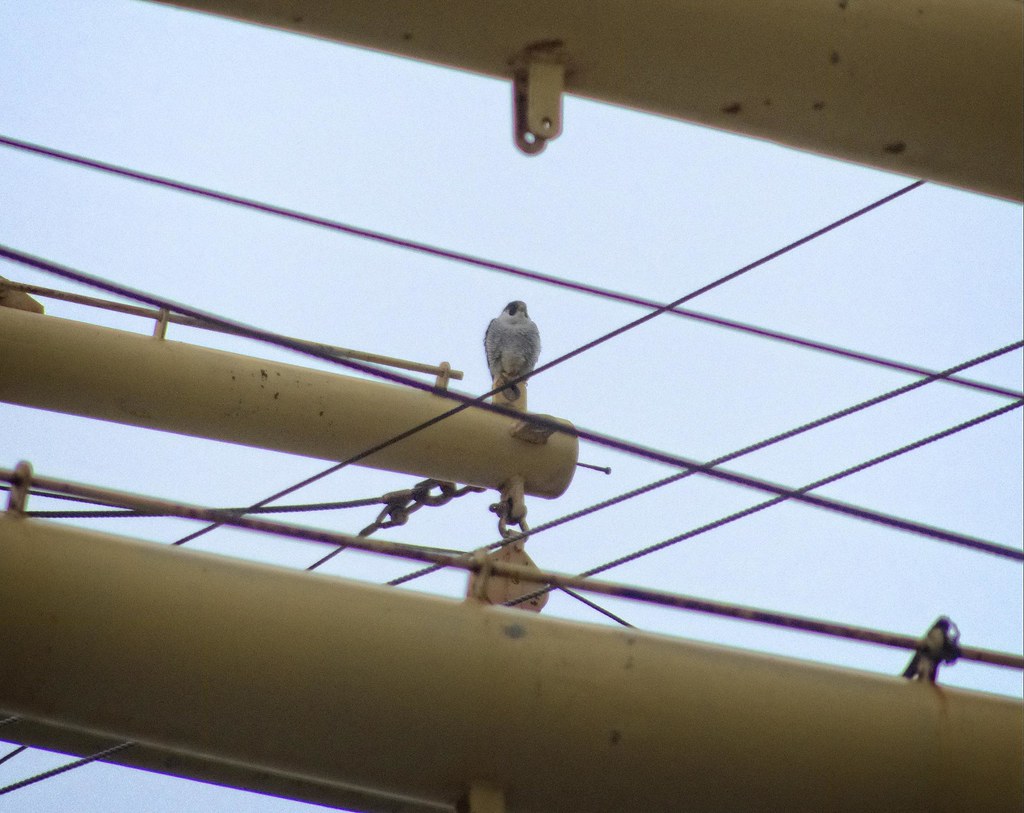 They remained on the Peking for quite a while before flying back towards the harbor.  I lost sight of the male, but the female returned to the nest box where she perched a few minutes, then went into the box and spent quite a bit of time in there.  Could she have laid an egg?  It's impossible to tell from the ground and the nest cam is not on yet, so I've reached out to the building management to see if they can check the camera and let us know.  I'll post an update if I learn anything.

I went to check on the falcons again today and found the female up at the box.  Again, she went inside for about 10 minutes.  I saw downy white feathers fly out of the box, so maybe she was eating something in there. 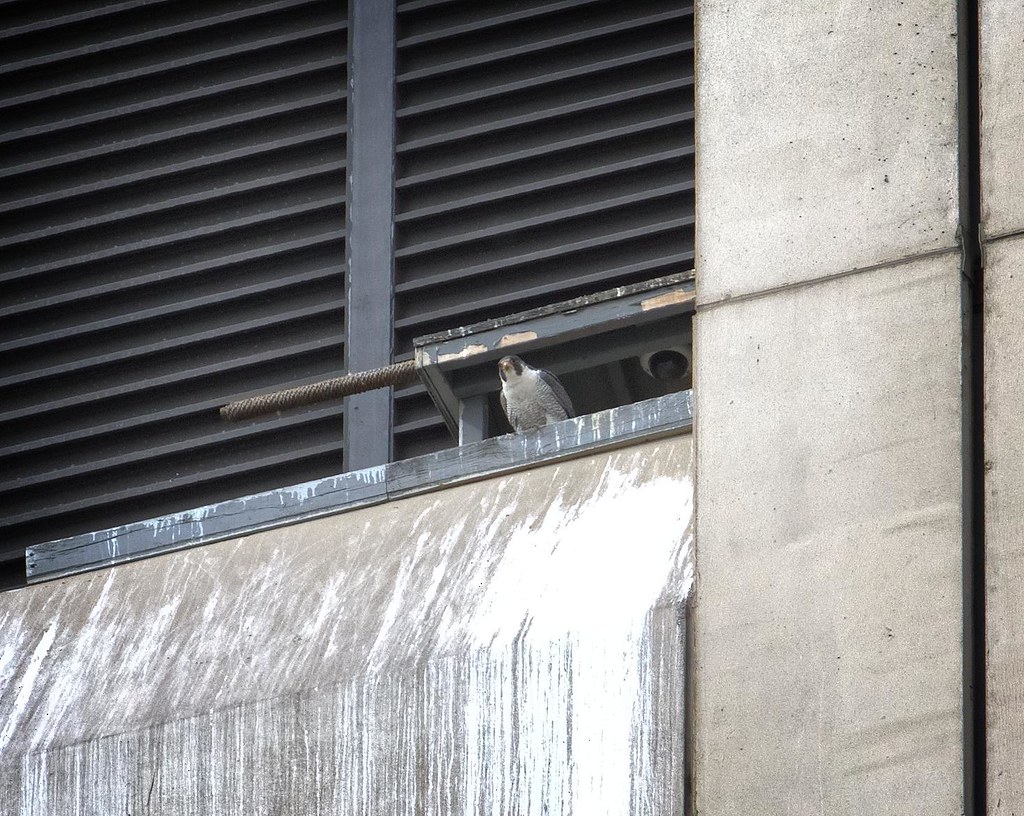 The wind today was absolutely brutal along the water.  I could barely stand up, and had to brace myself against a railing to keep from being knocked down.  As a result, I couldn't hold the camera steady.

The nest box looks to be sheltered from the wind, and I thought the falcon would remain there, but she surprised me by taking off.  As she leaped up, the freezing wind blew her back towards the building. 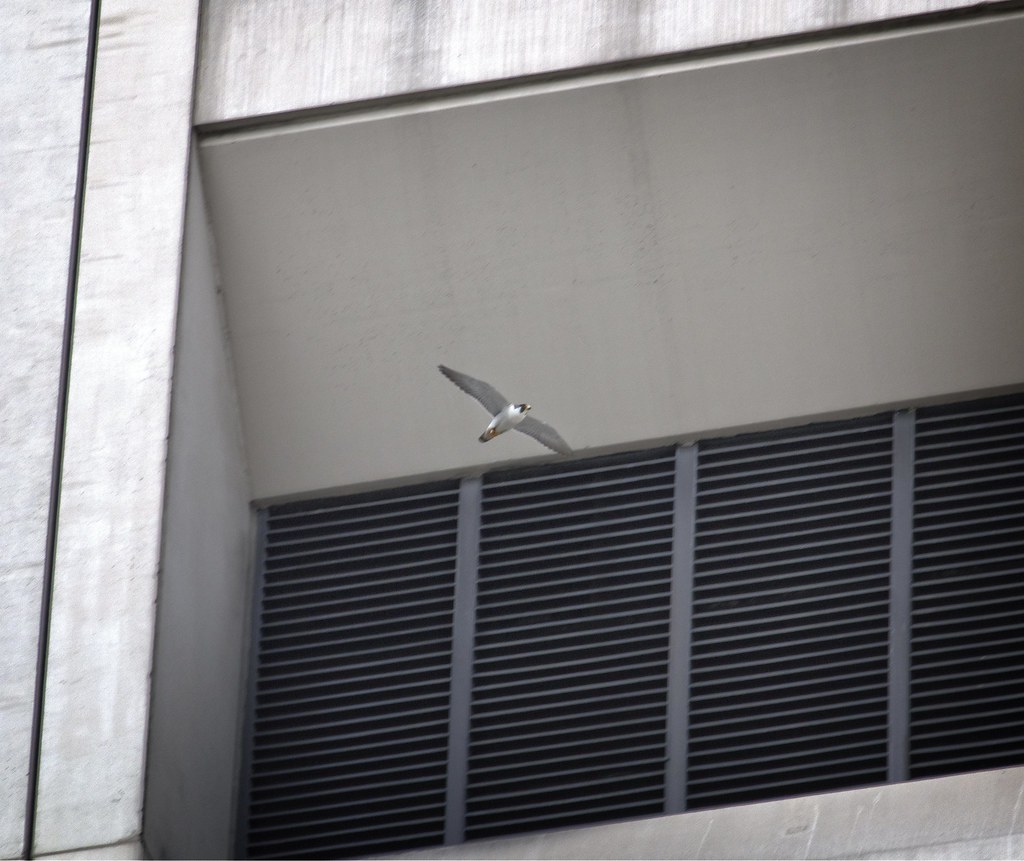 I really don't know how she managed to fly in the ferocious wind, but she's a pro. 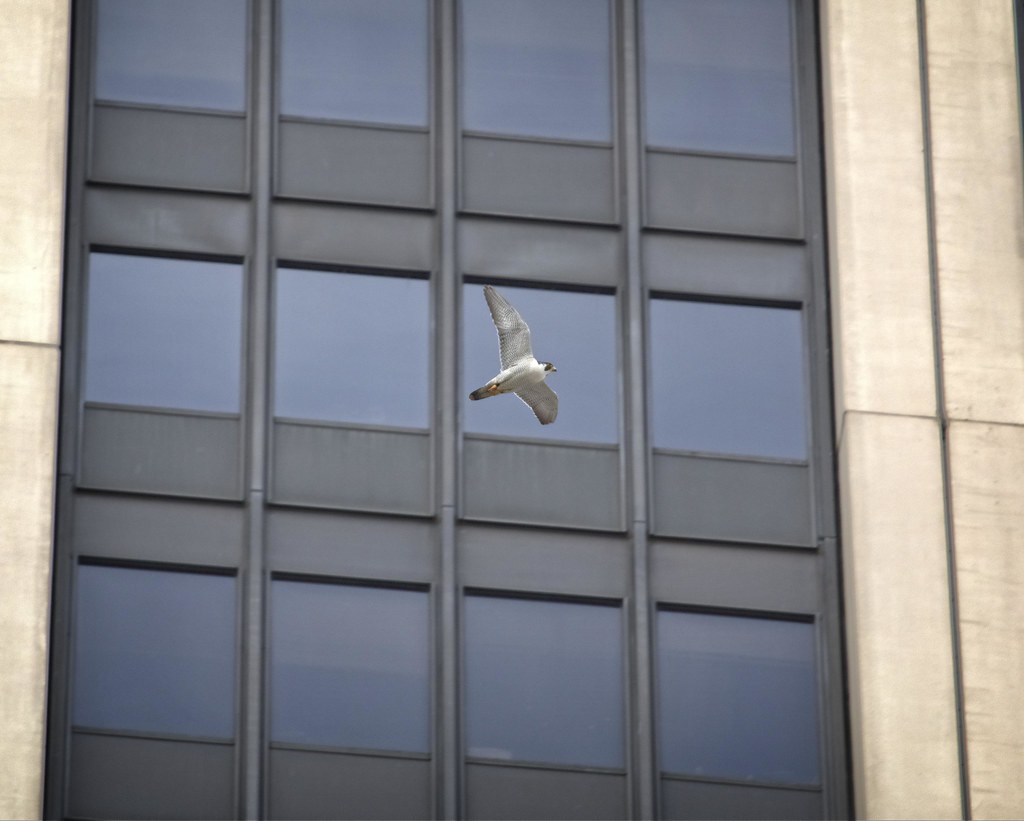 I'm hoping to have some more interesting updates on these guys in the coming weeks.