The frenzy before the storm

Backtracking a bit, below are some photos of Christo and Dora taken this last Sunday.  After weeks of difficulty tracking them because they were spending so much time out of the park, I was finally able to spend a full afternoon with both of them and they were very active.

Christo appeared first, looking rather sinister atop the men's restroom. 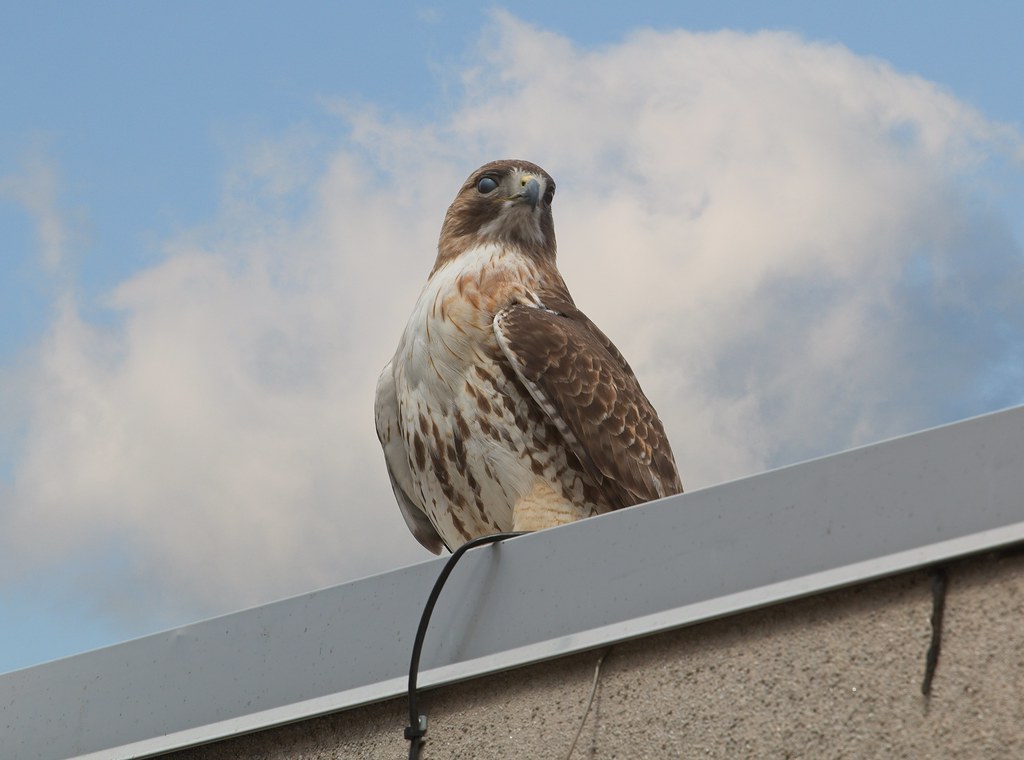 One way to tell him apart from Dora is the pattern of rusty brown color on his legs.  Dora has solid cream-colored legs. 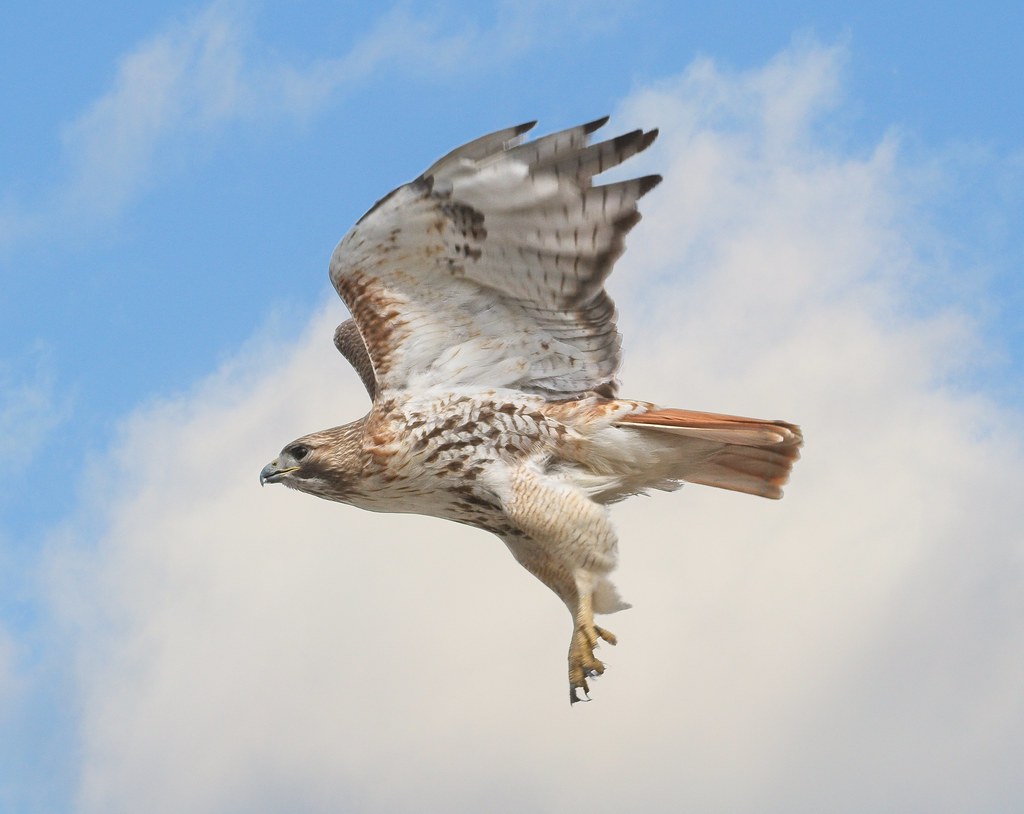 Even as Christo dives, you can still see the brown barring above his bare leg where it meets his tail. 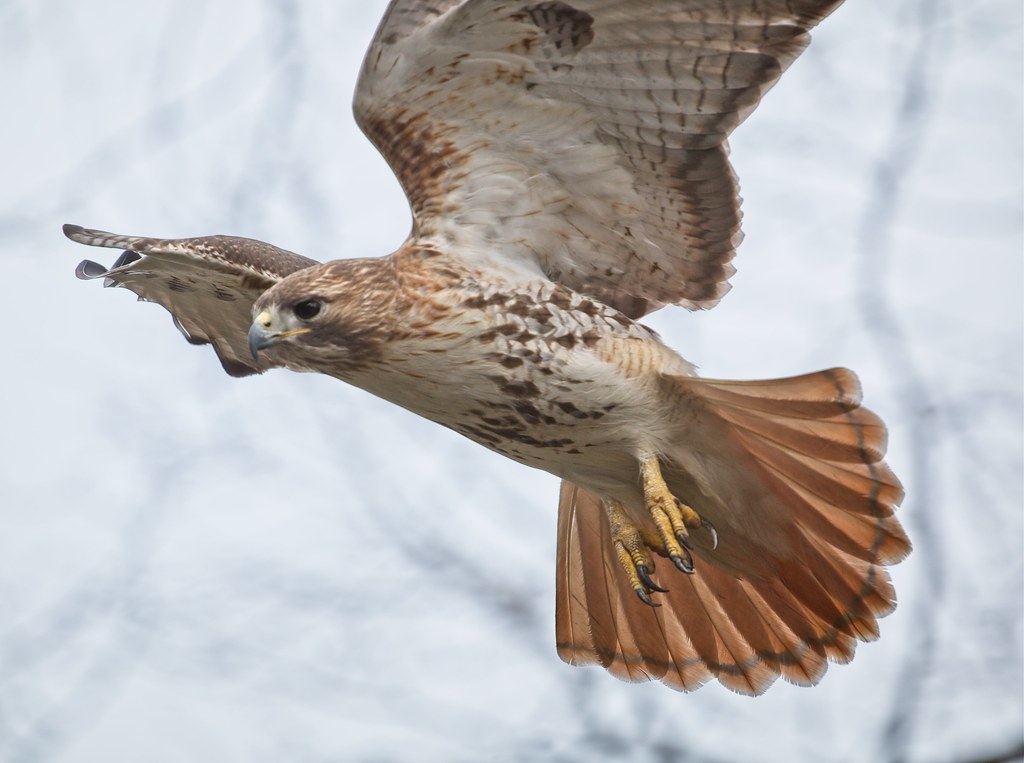 He also has a prominent white throat, whereas Dora has a mostly brown throat. 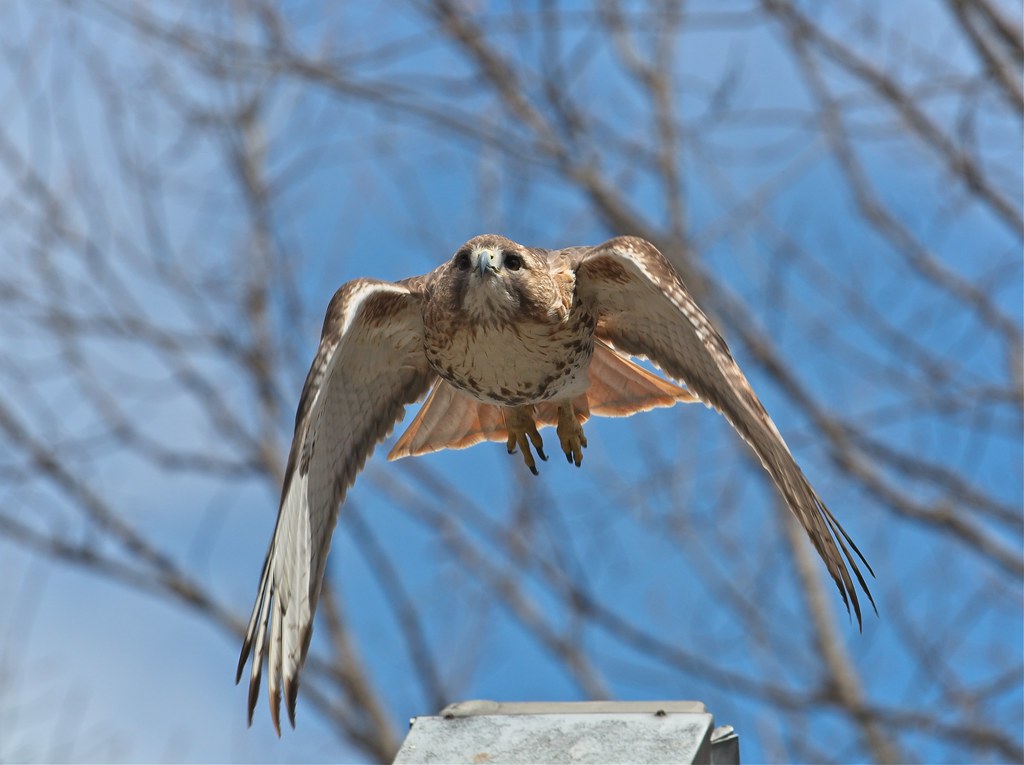 Christo took a break from hunting to go meet Dora atop a fire escape on Avenue A... 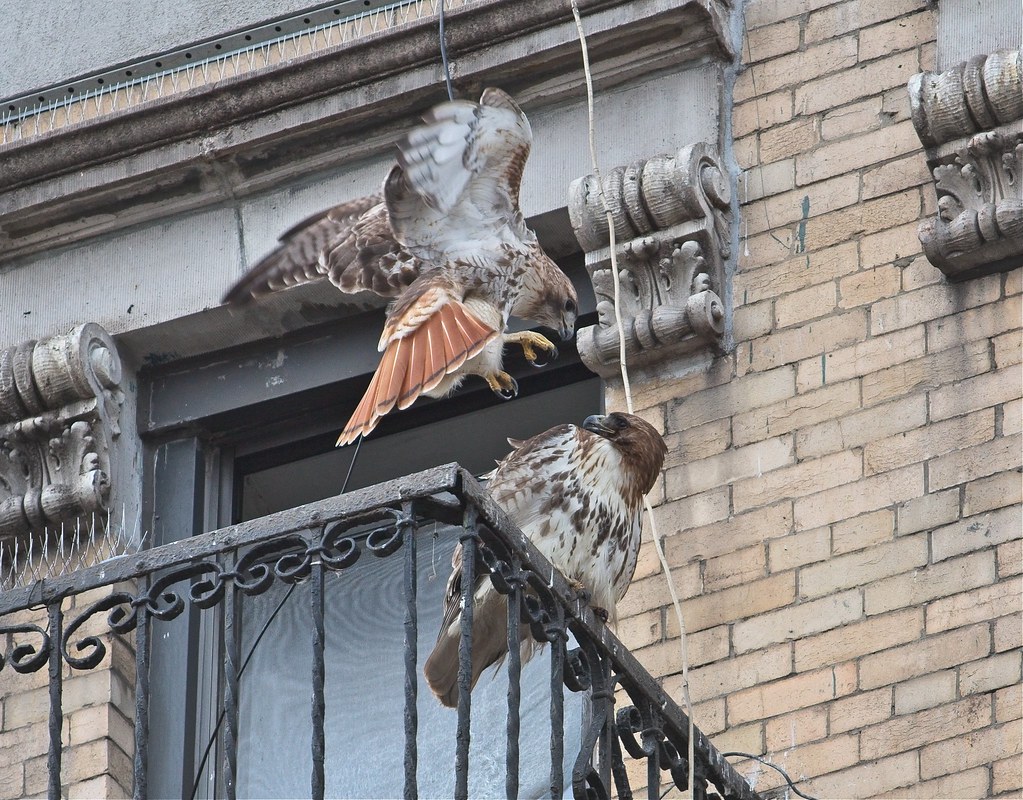 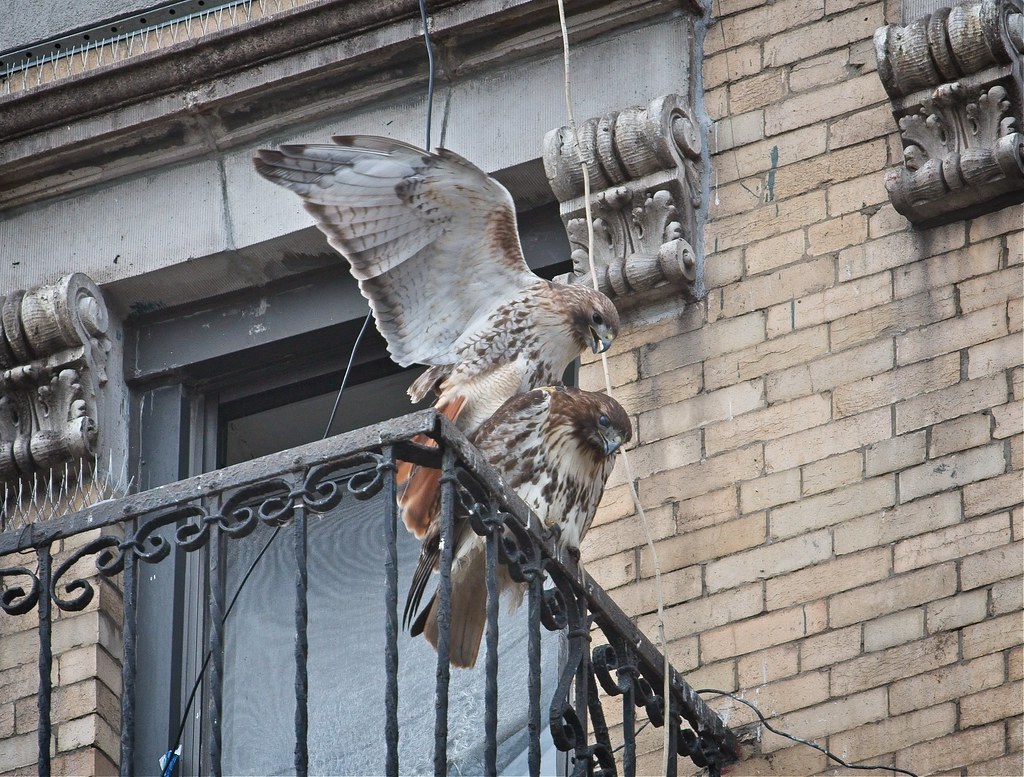 Soon after, he caught her a mouse, which he took to a tree, only to be confronted by a squirrel. 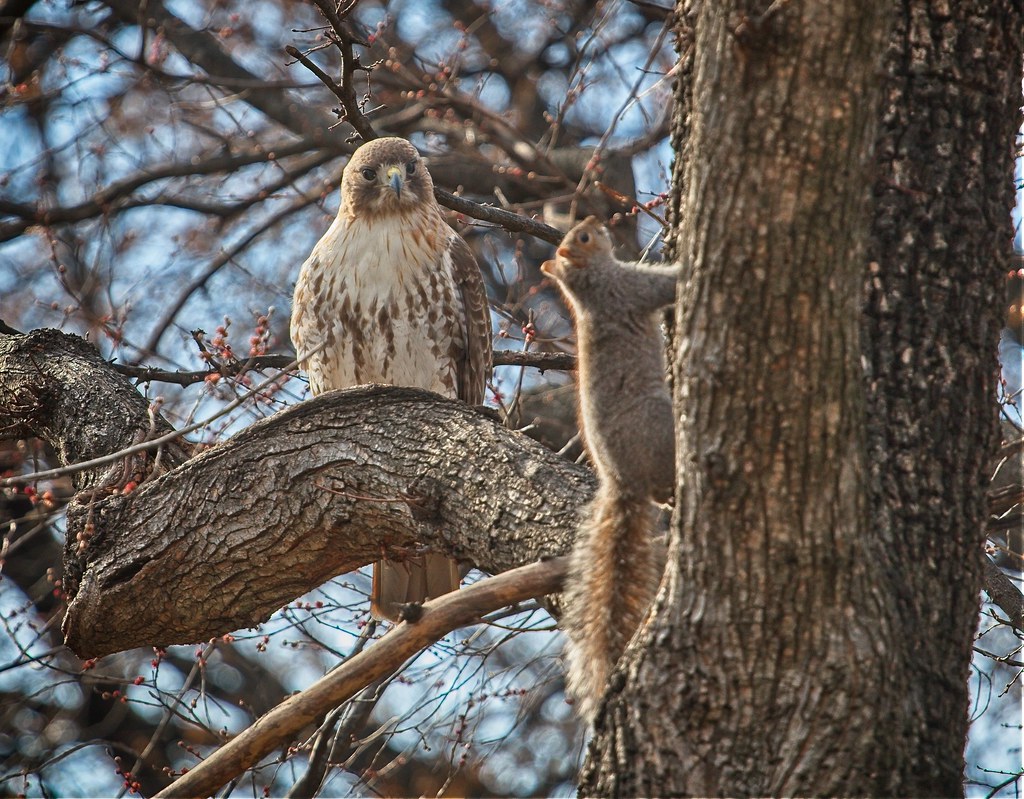 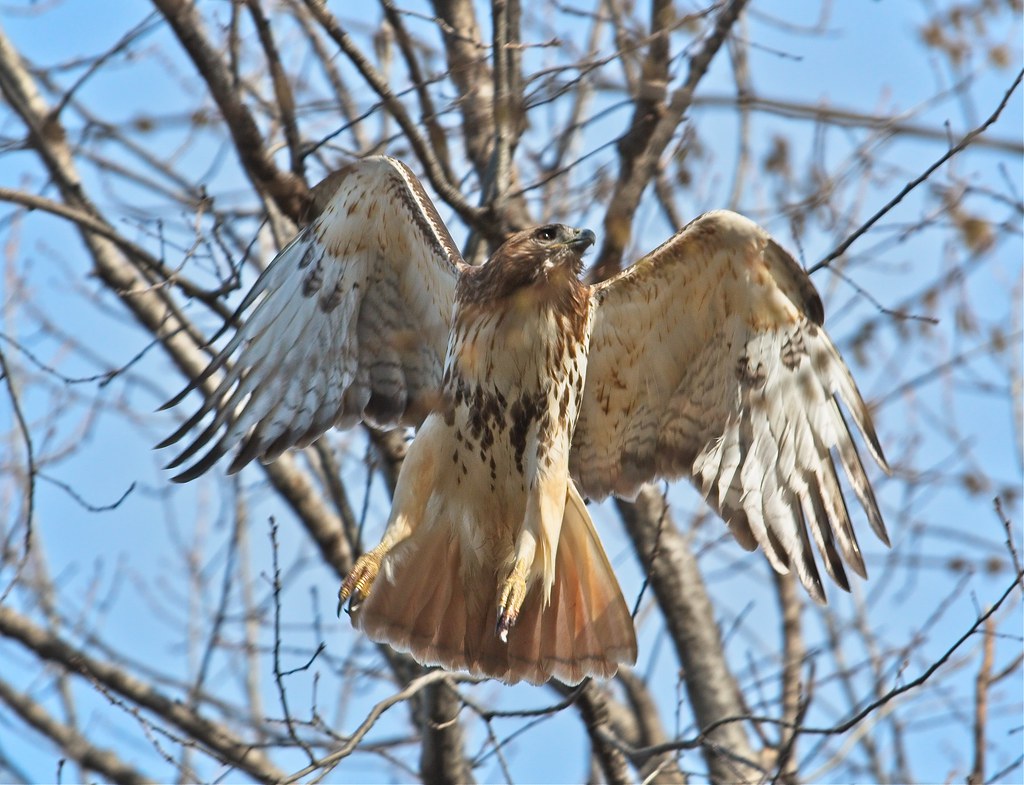 It was at this time that I noticed a reddish-brown rough patch on Dora's left cheek, extending from her eye to the corner of her mouth. 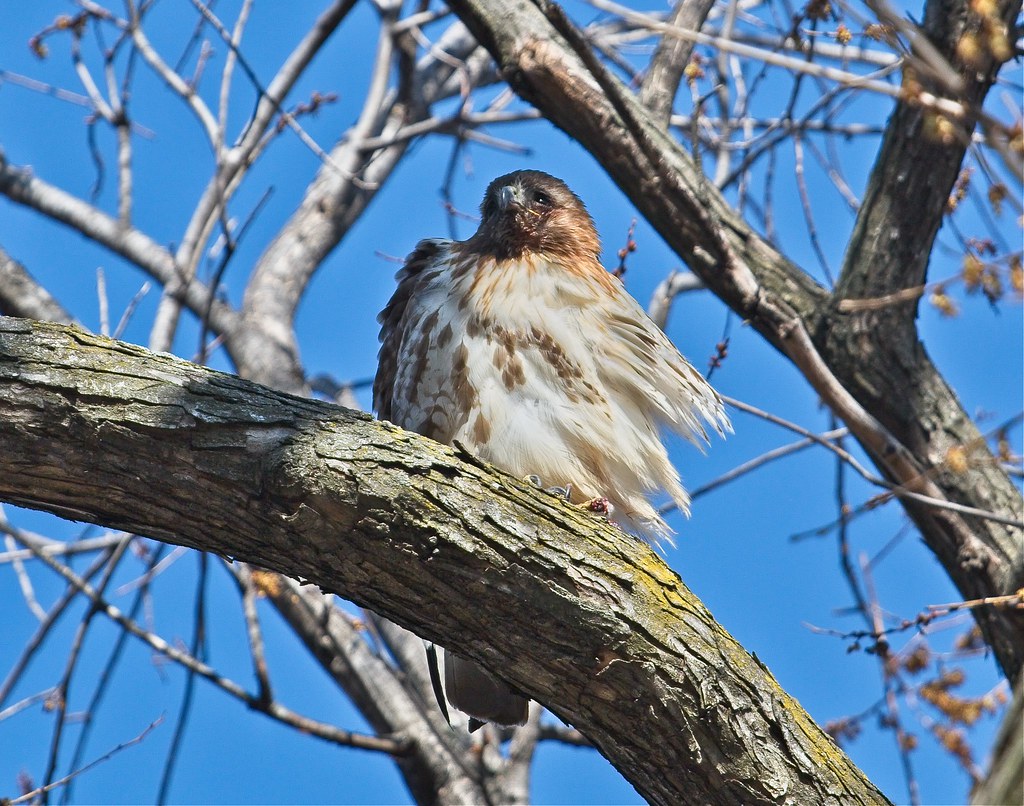 I wasn't sure if it was just mussed up feathers or blood.  Other hawk-watchers also thought the mark looked red, so I became very concerned.  Dora has been doing battle with so many other raptors lately, it would be easy for her to get hurt.  Then again, the blood could have come from eating a messy meal.  I confirmed the mark was there on Saturday and is still there today (Wednesday), but she has been behaving normally and eating a lot, so I'm assuming she's ok.  Nevertheless, it's worth keeping an eye on.

As Dora ate her mouse, Christo went on another hunting trip. 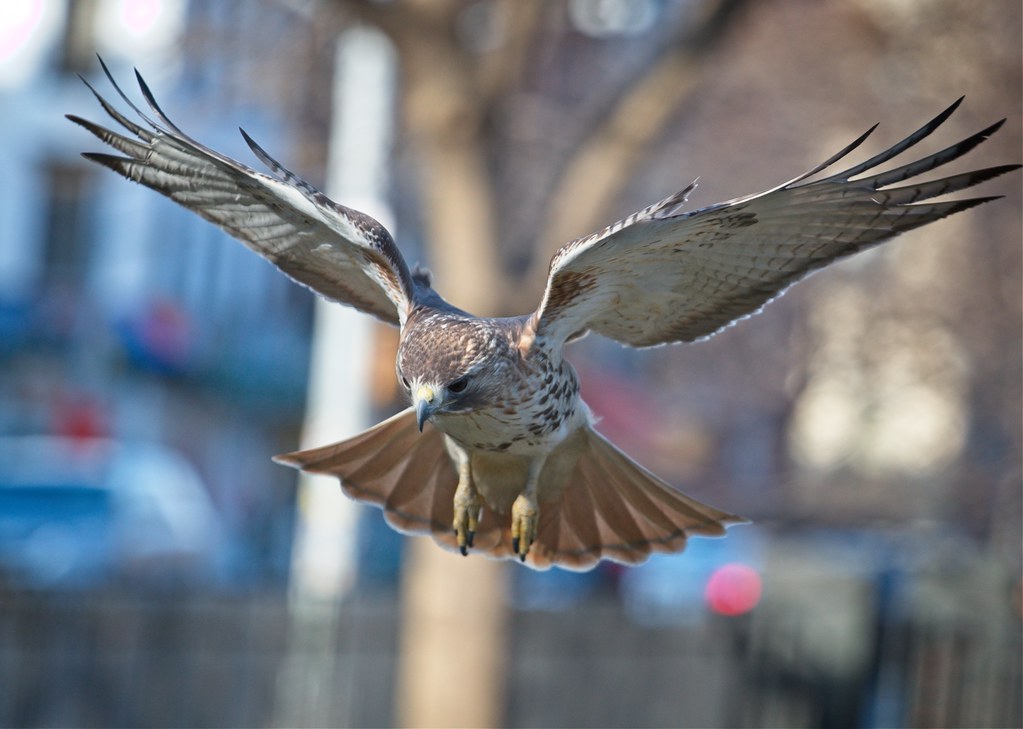 He visited the same area seven times to look for rodents.  While I was there, he caught two mice and a rat.  Below, he carries a rat back to where Dora waited. 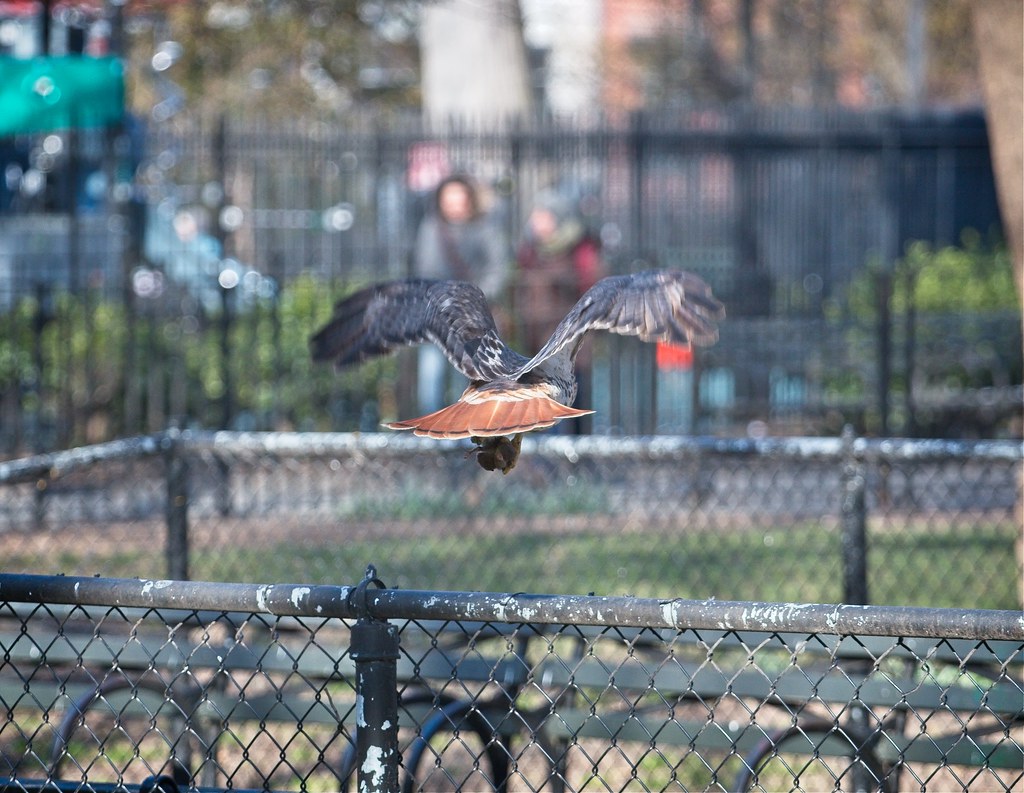 Here he is with one of the rodents in his talon. 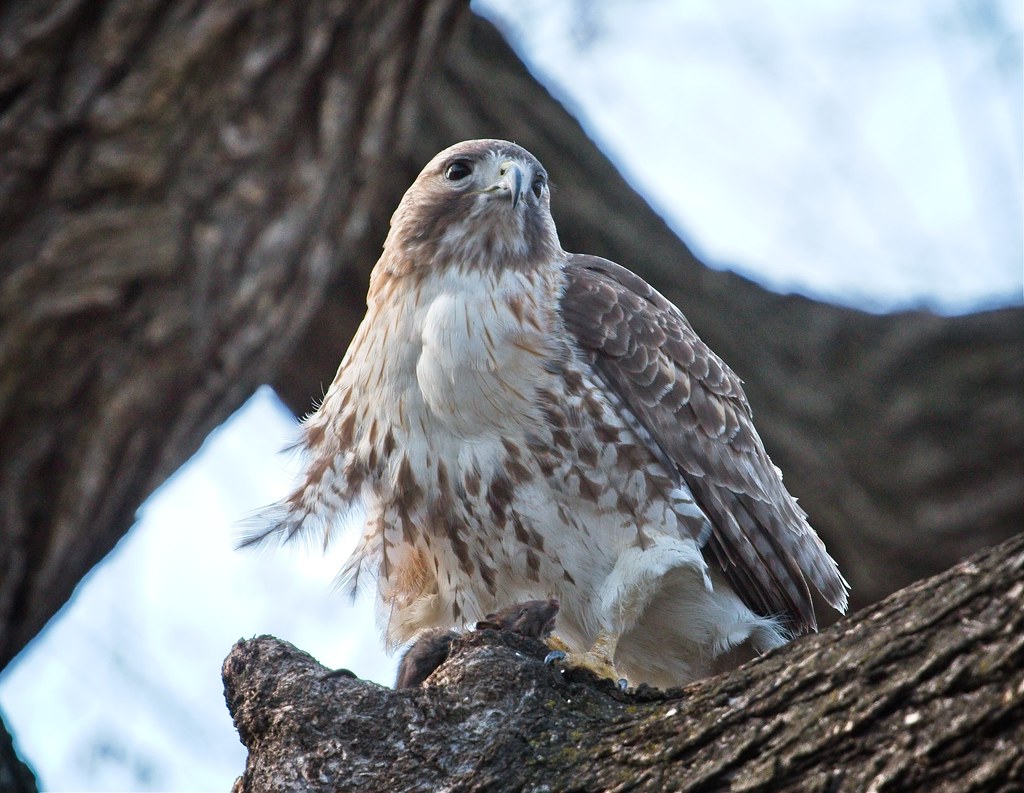 Christo continued hunting as the sun went down. 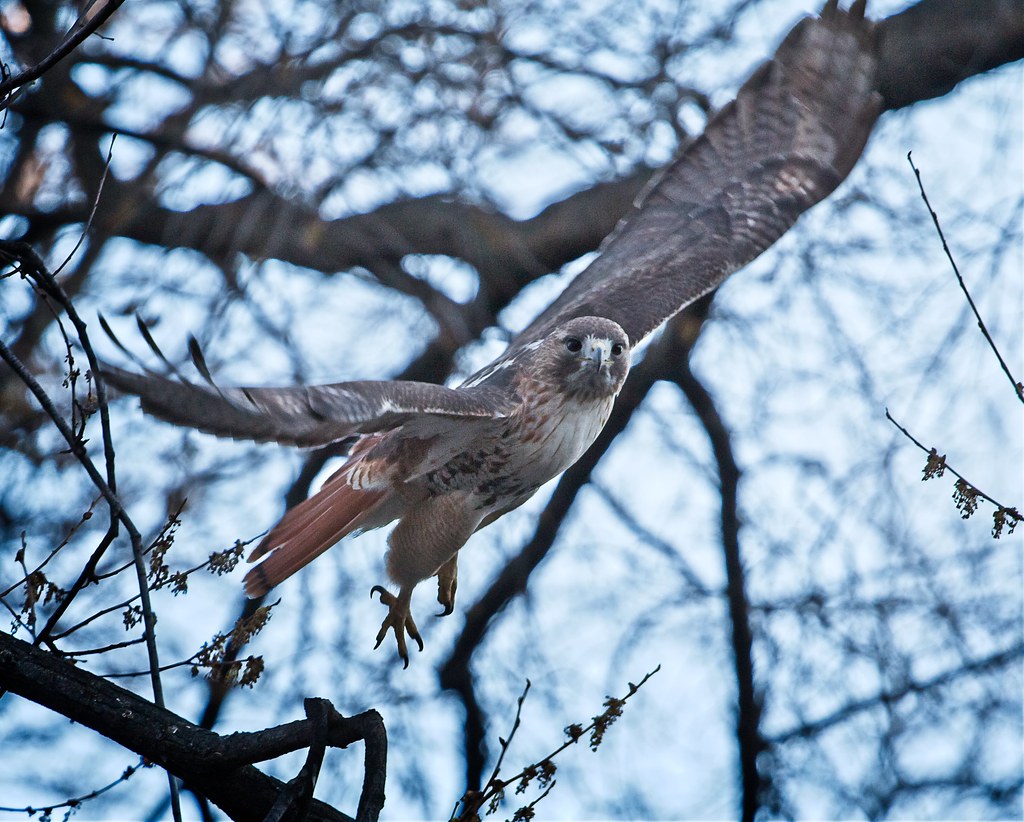 He caught a mouse close to my feet. 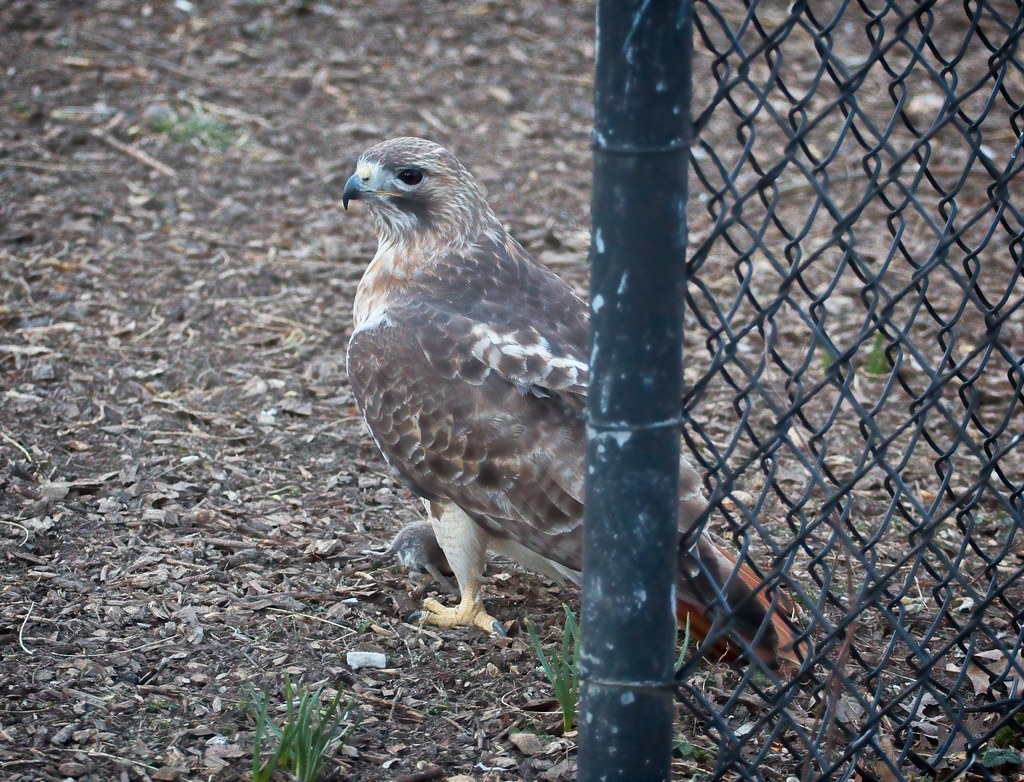 About two seconds after the above photo was taken, Christo abandoned his prey in order to chase an invading Cooper's hawk down Avenue A.  He later retrieved the mouse and took it back to Dora. 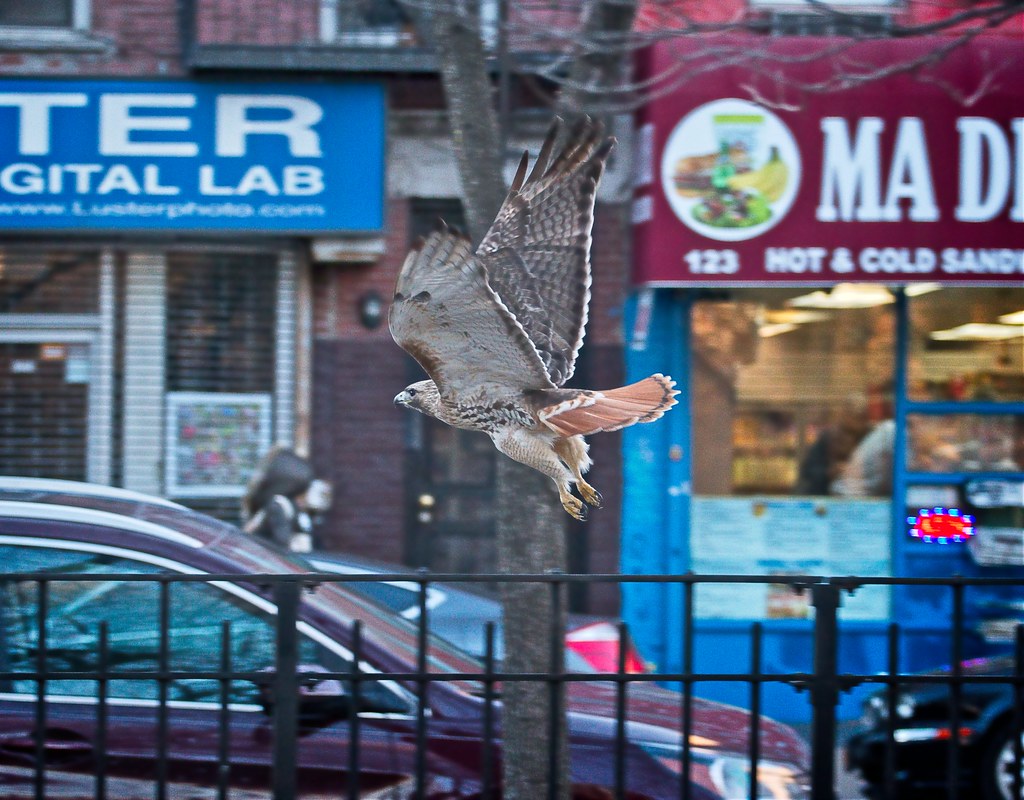 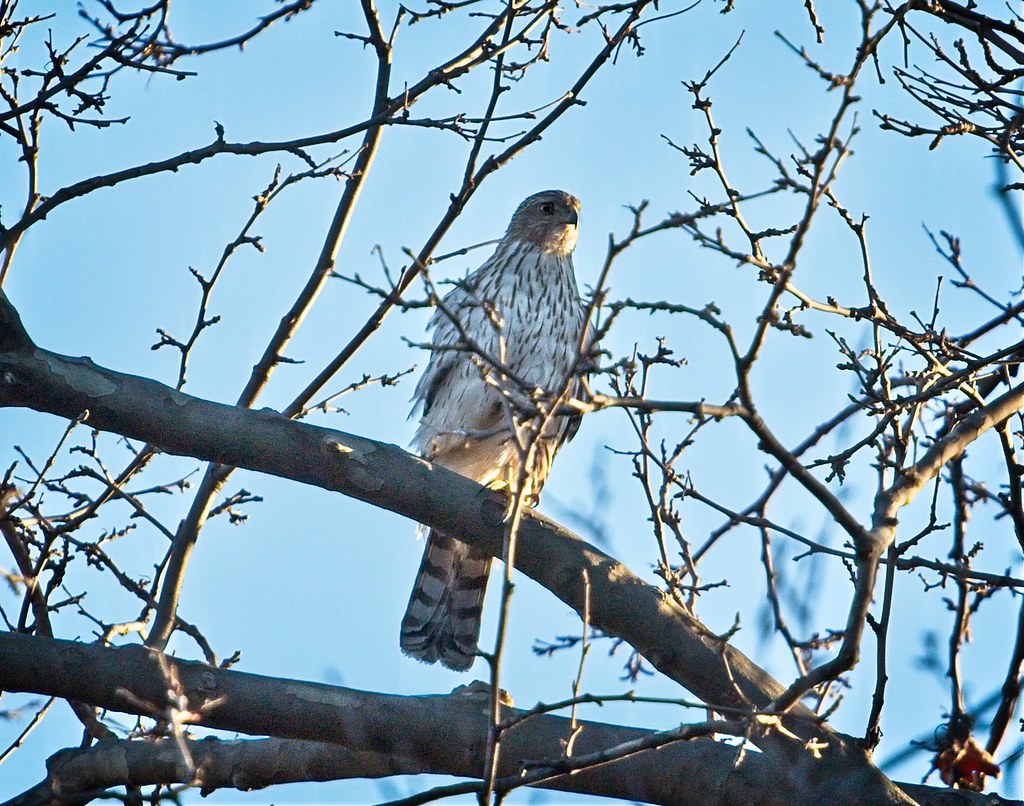 It's my theory that Christo and Dora have been spending so much time outside of the park this season because there are so many other hawks around and they are having to work hard to defend their territory.  In previous years, migrating hawks had already left the area before nesting time.  This year, there are still quite a few juvenile red-tails and Cooper's hawks in the neighborhood.  Now that Dora is brooding, Christo is doing double duty providing food and home security. I hope the other hawks decide to leave the city soon or, at least, leave Christo and Dora in peace.

I took a lot of photos on this day.  You can see the rest of them here.