The Tompkins Square hawks are brooding now, and I think we can safely assume all eggs have been laid.  The Washington Square hawks laid their third egg on March 17, and the Tompkins Square hawks are usually a couple of days behind them.  I saw Christo and Dora mating on Saturday, so I took that to mean all their eggs had not been laid by that point.  I'm guessing the third (if there is a third) could have been laid Sunday or Monday.  This is all speculation on my part because no one can see into the nest to see what is actually there.

Christo and Dora have been making regular nest-switches and Christo has been industrious as ever.  He is the primary food provider and here he is with a mouse for Dora. 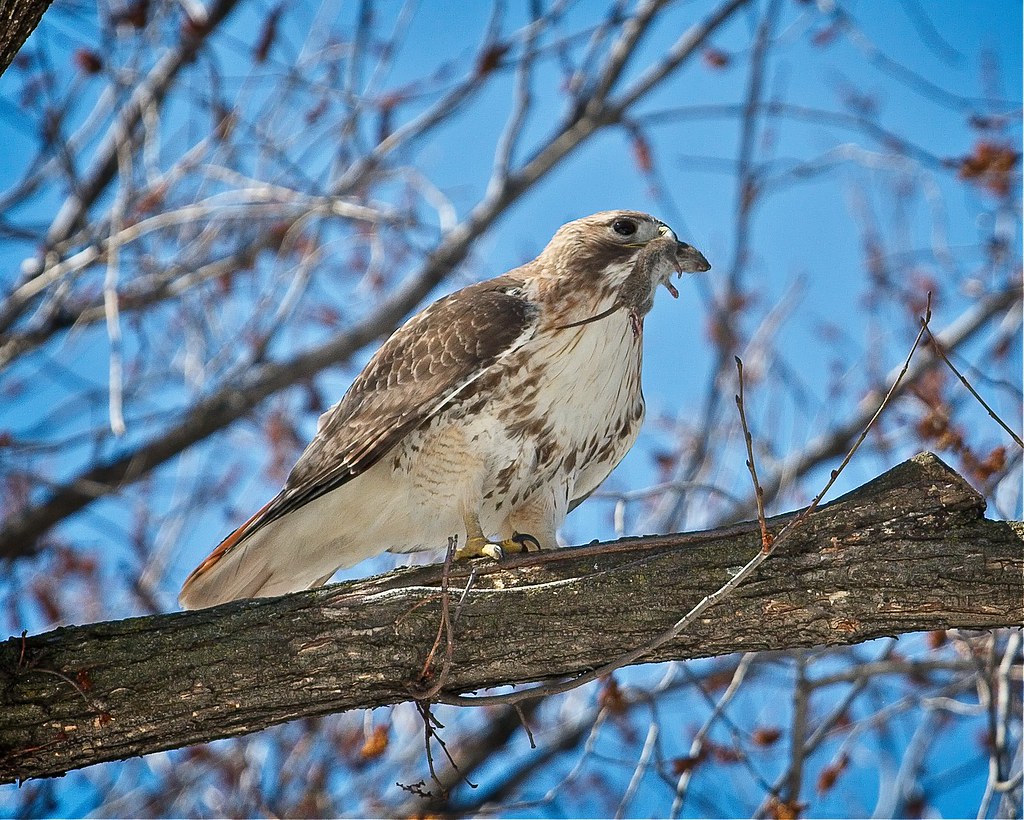 When he's not hunting, there is always nest maintenance to be done.  Below, Christo peels bark from a maple tree. 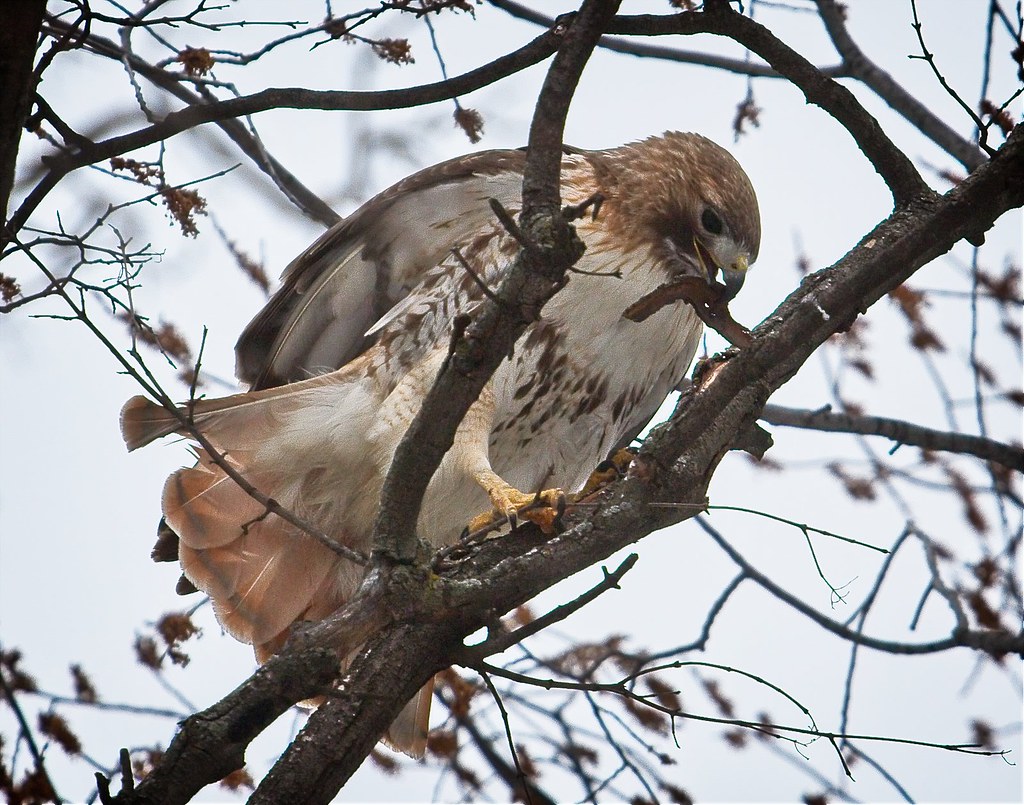 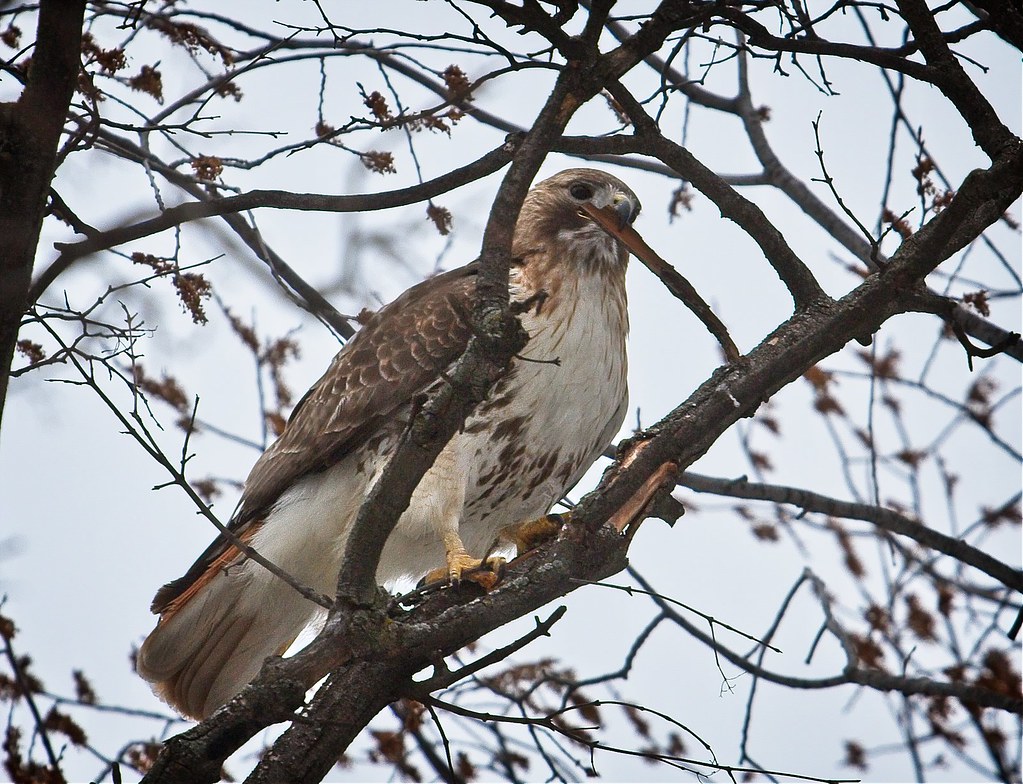 Here he is flying a redwood branch back to the nest.  He has previously favored that tree for nesting material. 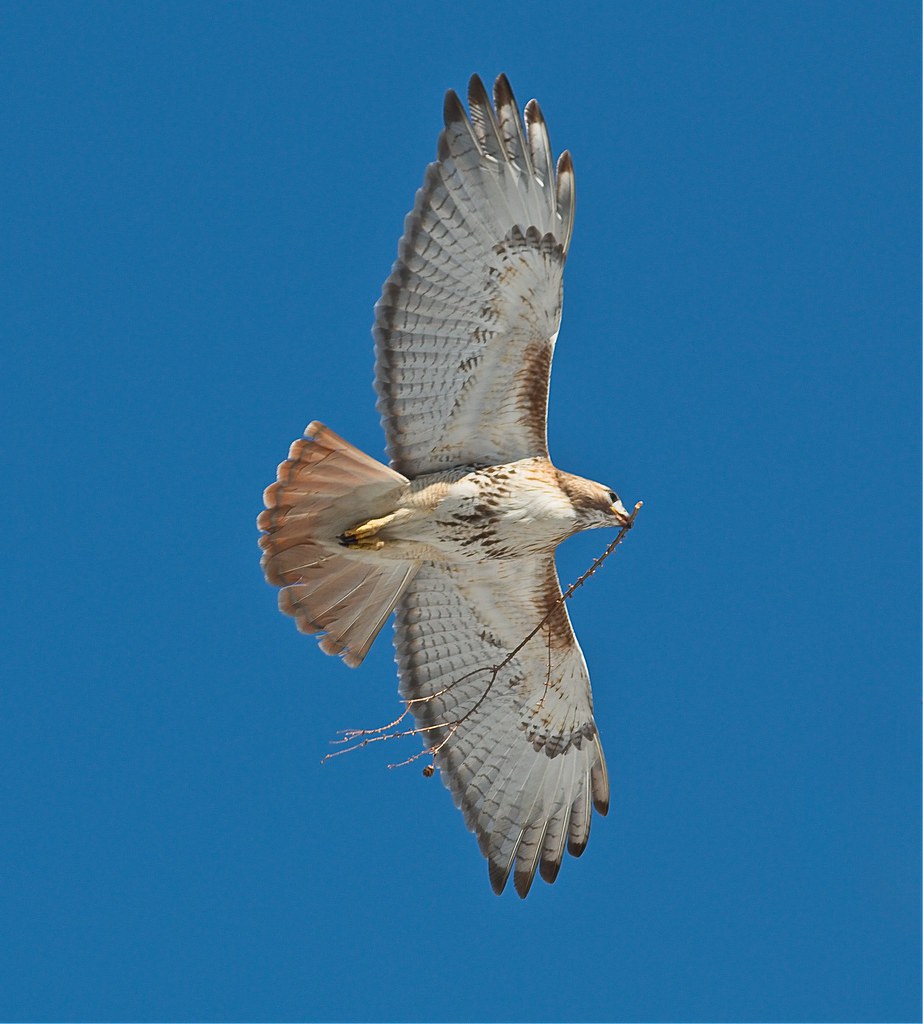 The hawks are also having to deal with troublesome neighbors (welcome to New York!).  Below, a squirrel confronts Christo as he plucks a pigeon. 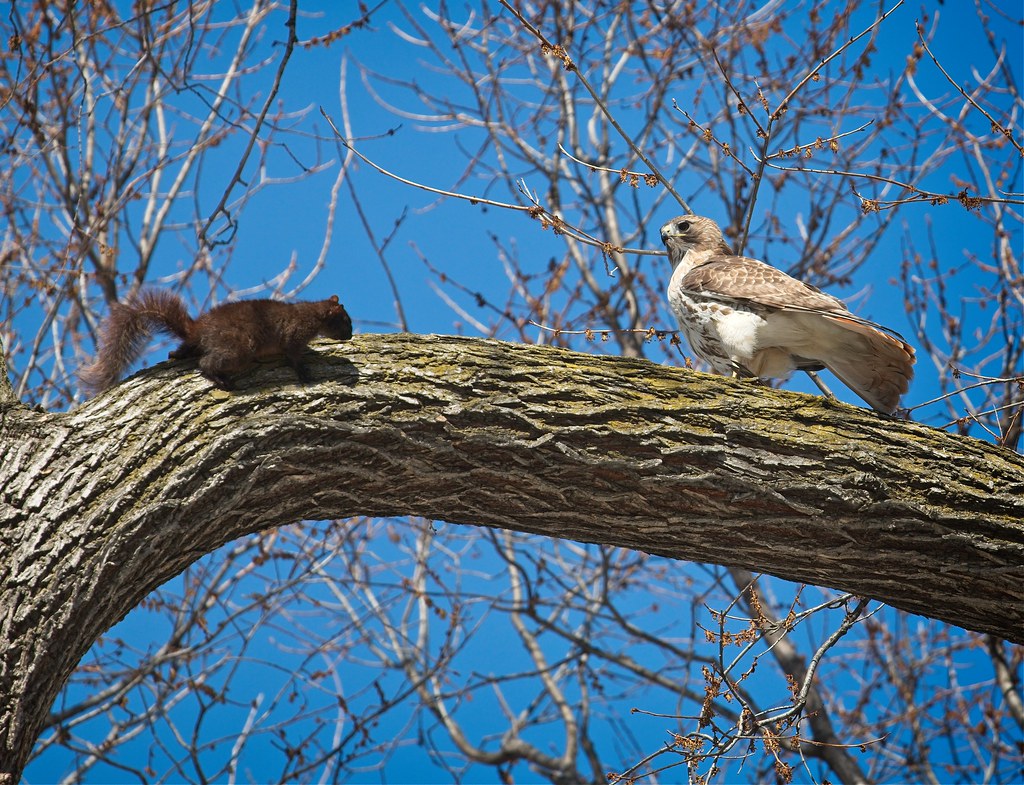 Across the park, another squirrel watches as Dora eats lunch. 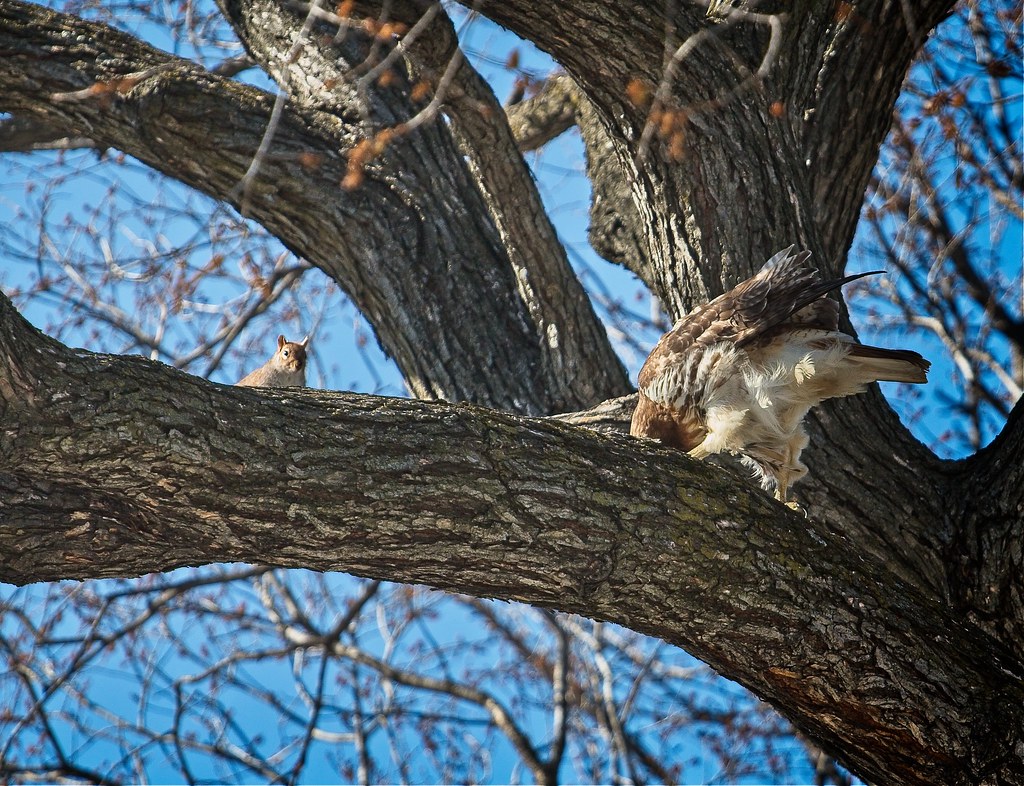 On Saturday, there was a worrisome incident when a third raptor (I couldn't see what it was) caused both Christo and Dora to take off and leave the nest unattended.  A squirrel took advantage and crept up to the nest.  Dora quickly returned and tried to scare the squirrel away, but it wasn't afraid and taunted her from the middle of the tree.

In the photo below, you can see that Dora can't really maneuver between all the tiny branches to get at the squirrel. The squirrel is likely one of many who live in that tree and are very territorial.  I previously expressed my misgivings about this nest location, mostly because hawks and squirrels cannot live a few feet away from each other and not have problems. 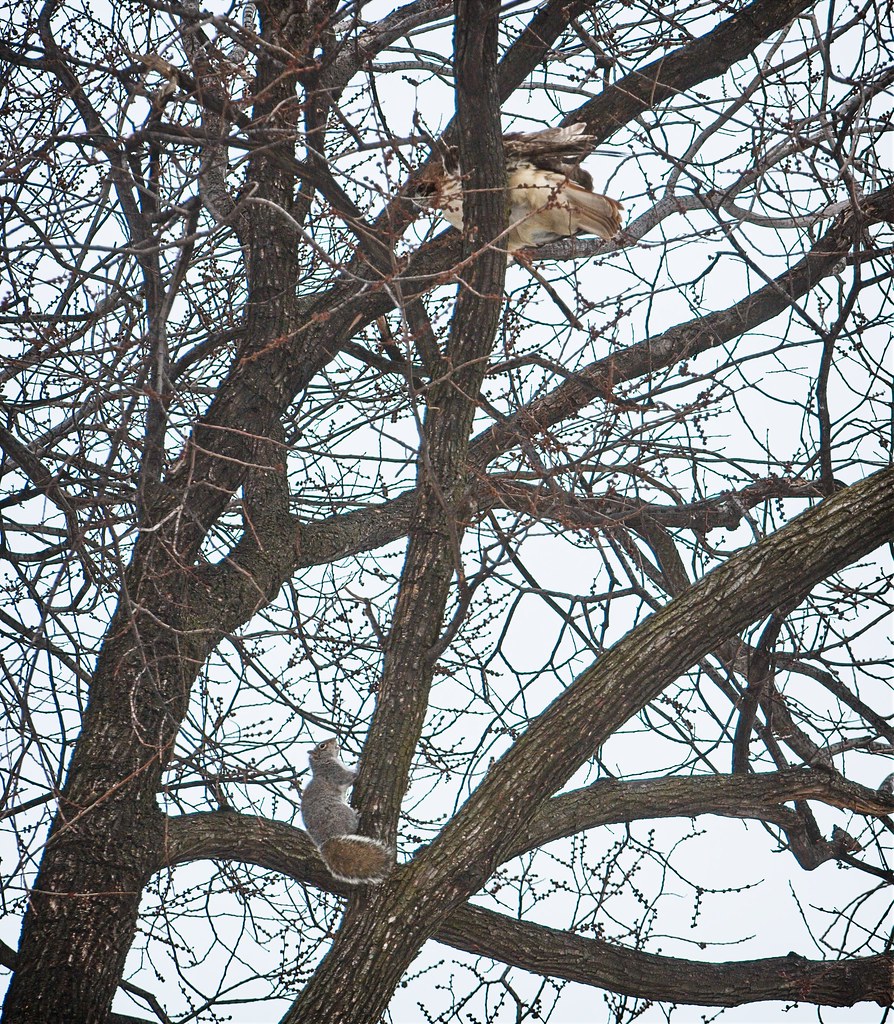 About a second after I took the above photo, Christo came zooming in from behind me as fast as a bullet.  He struck the squirrel and knocked it out of the tree.  The squirrel fell 50-60 feet to the ground where, fortunately, there was a thick layer of snow that cushioned the fall and the squirrel survived.

On Sunday, while Christo was brooding in the nest, a squirrel (I don't know if it was the same one from the day before) climbed right up the side of the nest and looked inside.  Christo exploded out of the nest, but he had been facing the other way, so had to twist around 180 degrees to chase after the squirrel. 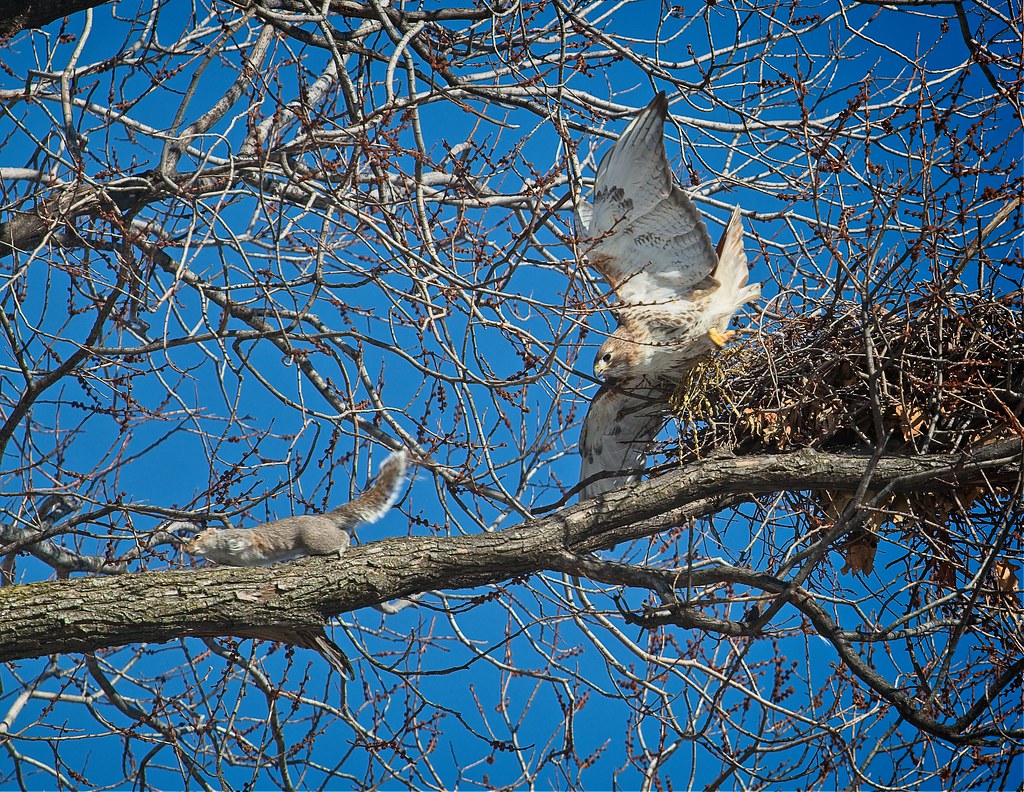 If Christo had been facing the other way, I don't think the squirrel would have escaped. 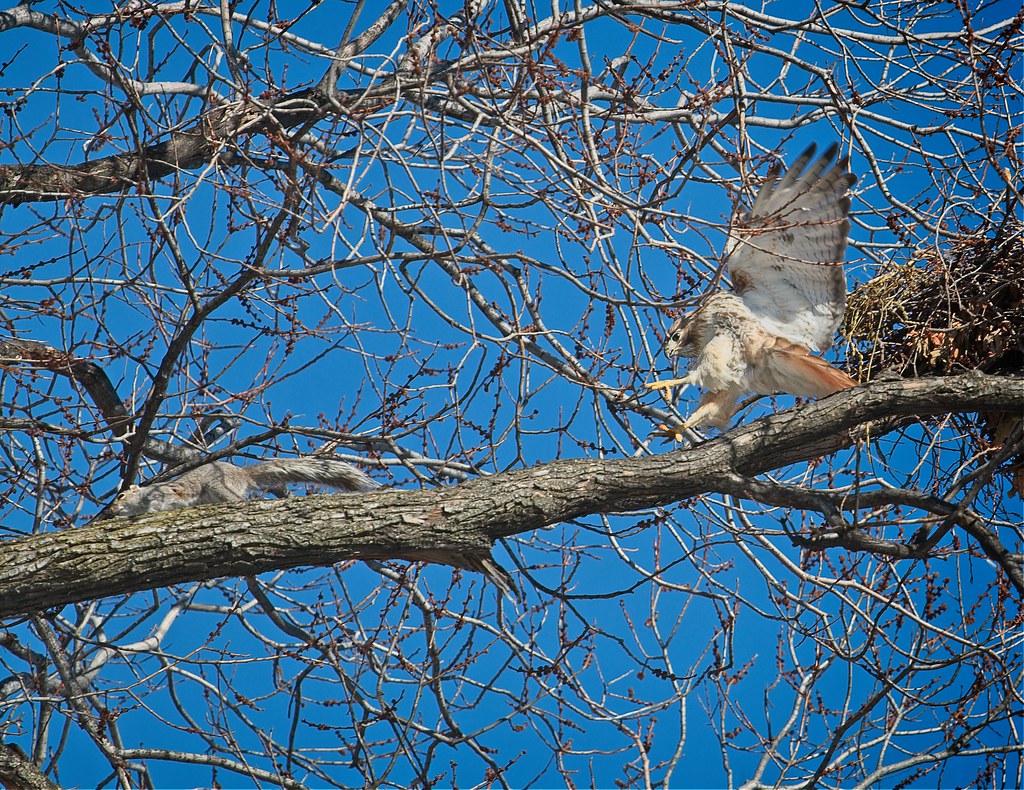 Although they are prey for hawks, squirrels can also inflict injury.  They have razor sharp teeth and the Tompkins squirrels seem to have no fear and a whole lot of attitude.  I worry about them hurting the hawks as much as I worry about them being turned into lunch.  Last week, I was concerned about a mark on Dora's face which, if it was an injury (we were never able to figure it out), could have come from an encounter with a squirrel.

She seems to be fine now.  Below are some photos of her from Sunday. 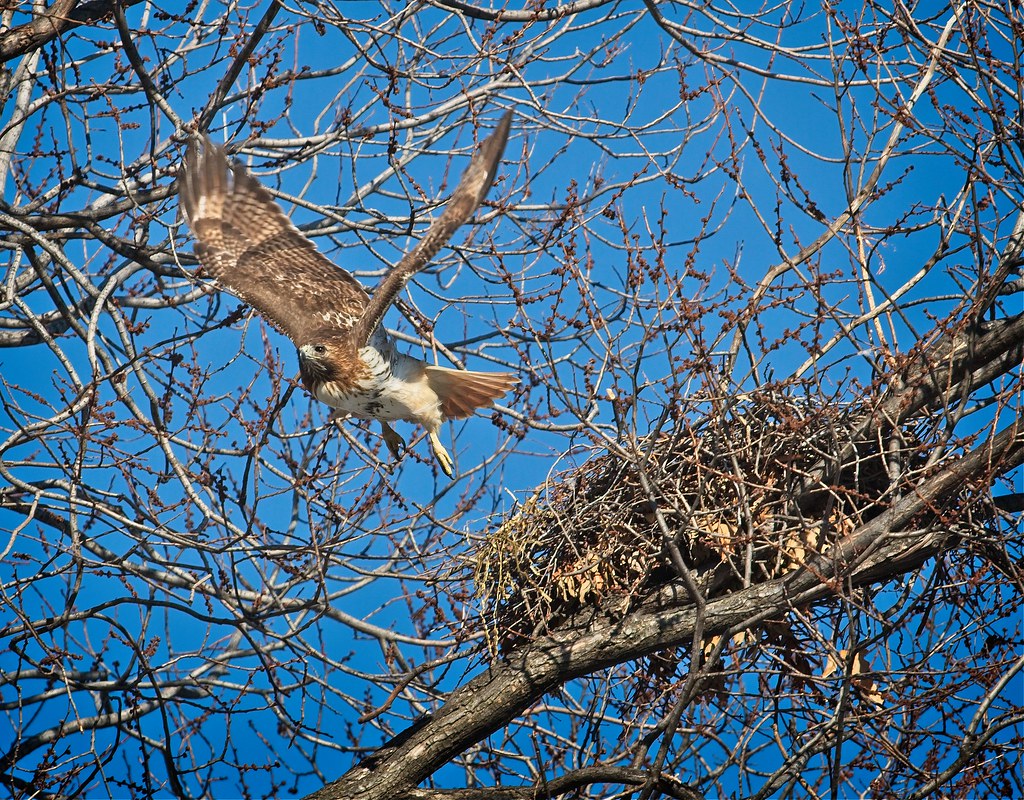 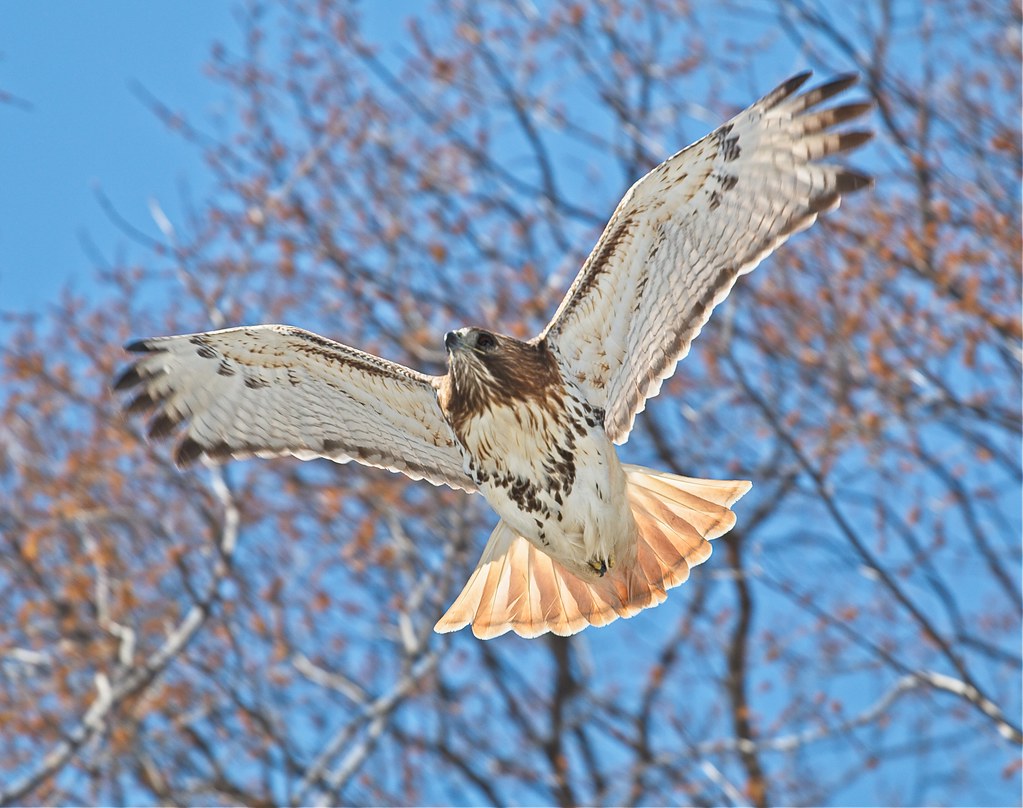 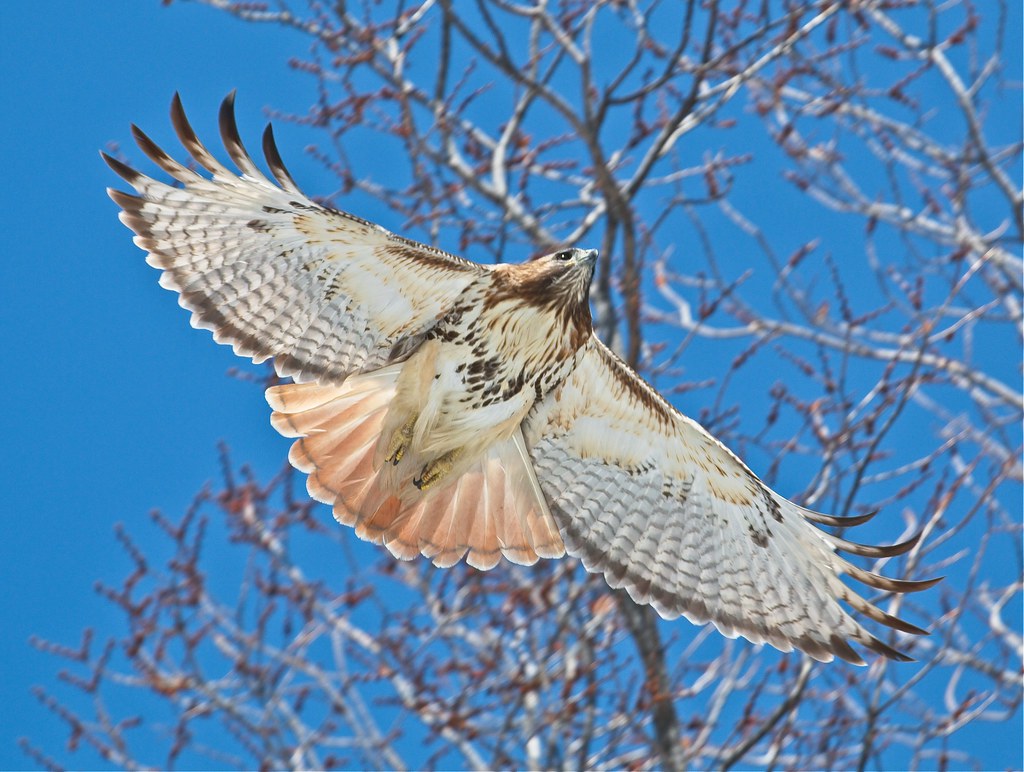 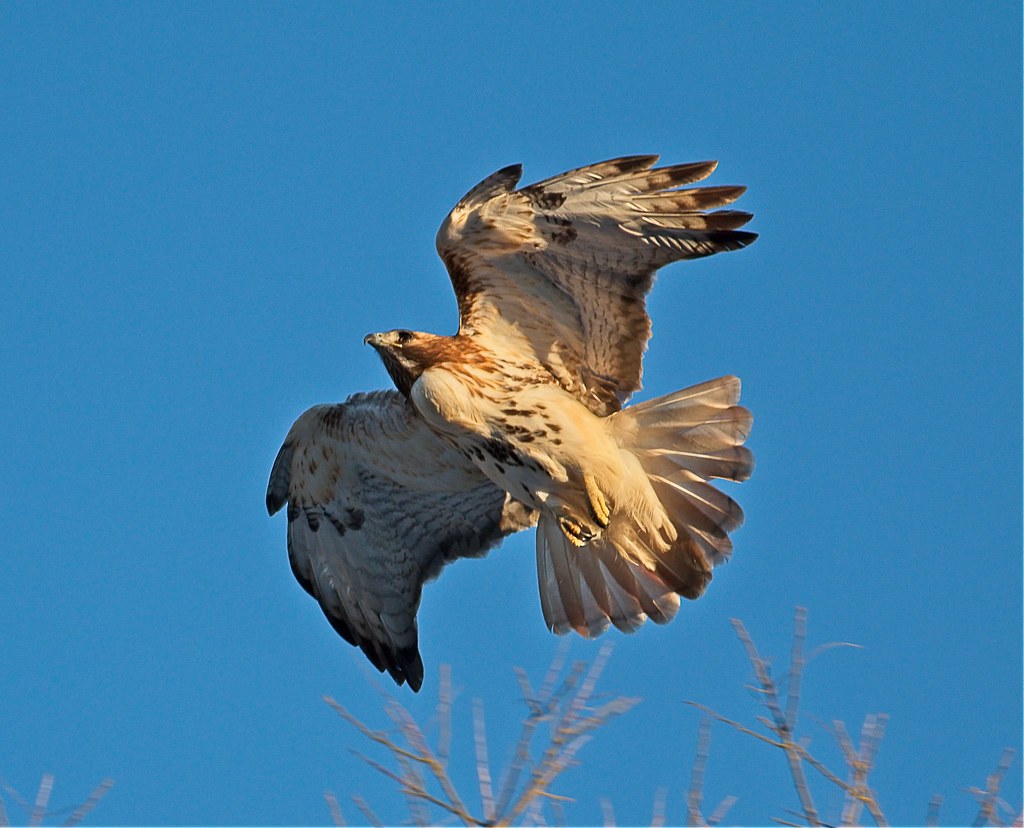 In other hawk news, I was heartbroken today to learn of the passing of Ezra, the male red-tailed hawk who was featured on Cornell's live hawk cam along with is mate, Big Red.  Ezra and Big Red were the first hawks I ever watched on camera and they really got me interested in red-tails and other raptors.  As they were the first pair I followed, they will always be special to me and I really appreciate everyone at Cornell for sharing them with the world.  I learned so much from them and they have helped me to better understand and appreciate Christo and Dora.
Posted by Laura Goggin Photography at 8:19 PM