This last fall, I visited Florida where I saw an incredible number of birds. Each day started with the sound of either a Mockingbird or a Blue Jay calling at sunrise, and usually ended with Pelicans and Egrets flying to their island roosts at sunset. I took so many photos, I'm still going through them.

Back in December, I posted some Florida raptor photos. Today, I have a few more.

I was unable to catch sight of  Bald Eagle in NYC in all of 2019, so I was happy to see several in the wild during my trip down south. Below is an adult Bald Eagle at its nest in St Marks National Wildlife Refuge. 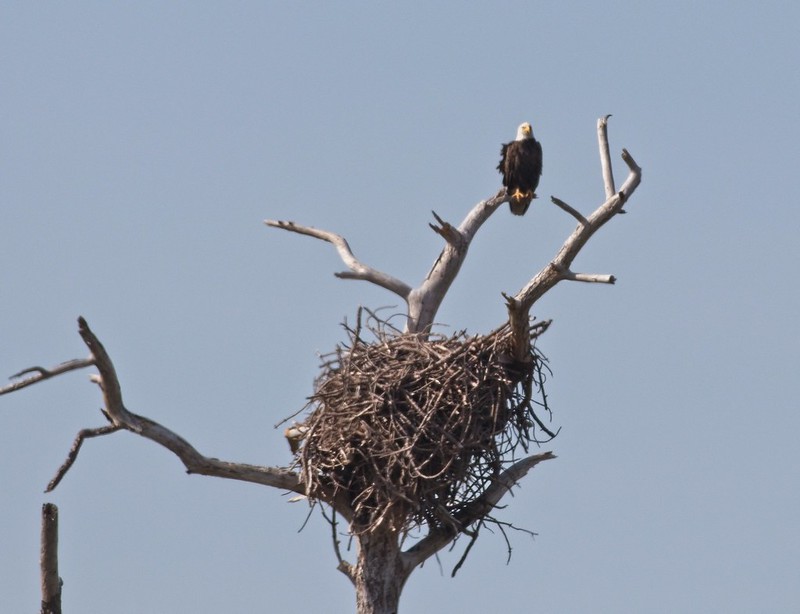 This adult was soaring around Cedar Key on the gulf coast, which is a marvelous place to see wildlife and sunsets. 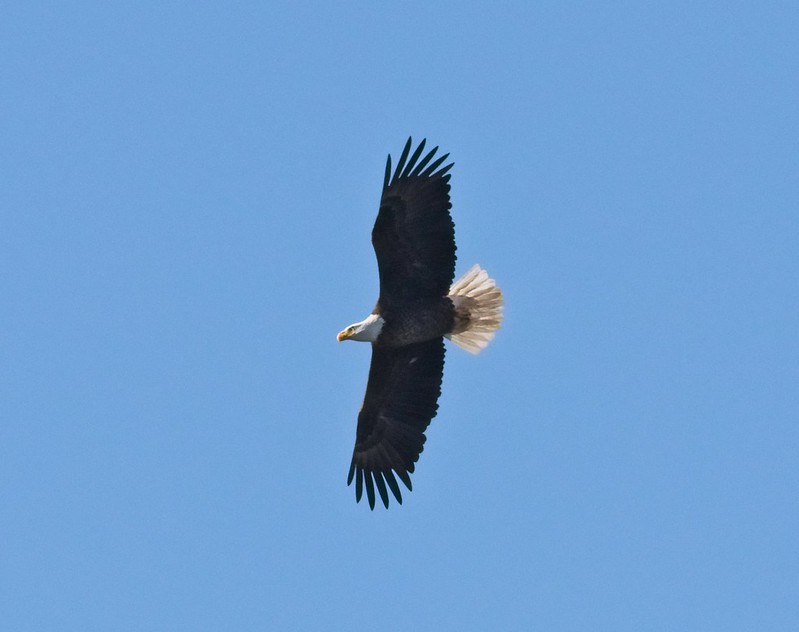 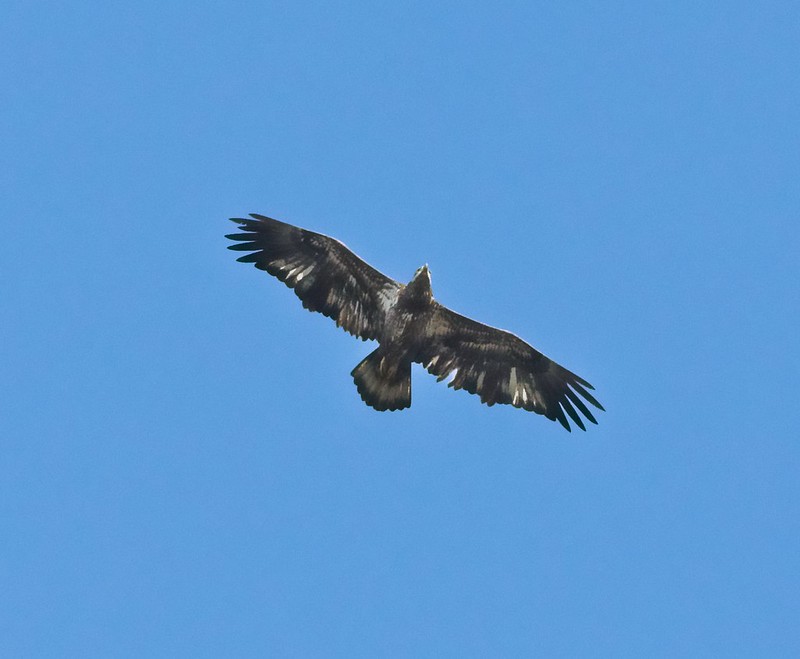 The eagle flew over really fast, like it was on a mission. Within seconds, it was on the tail (literally!) of a Turkey Vulture. 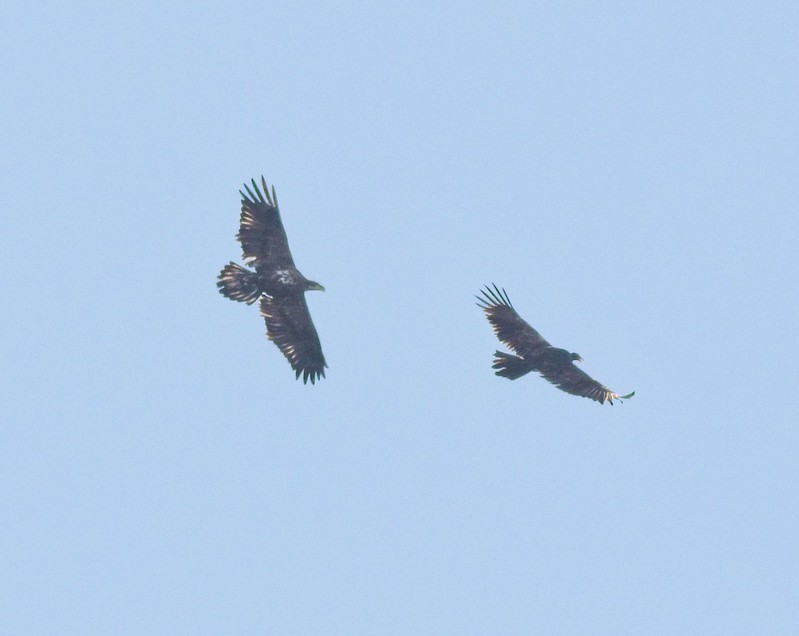 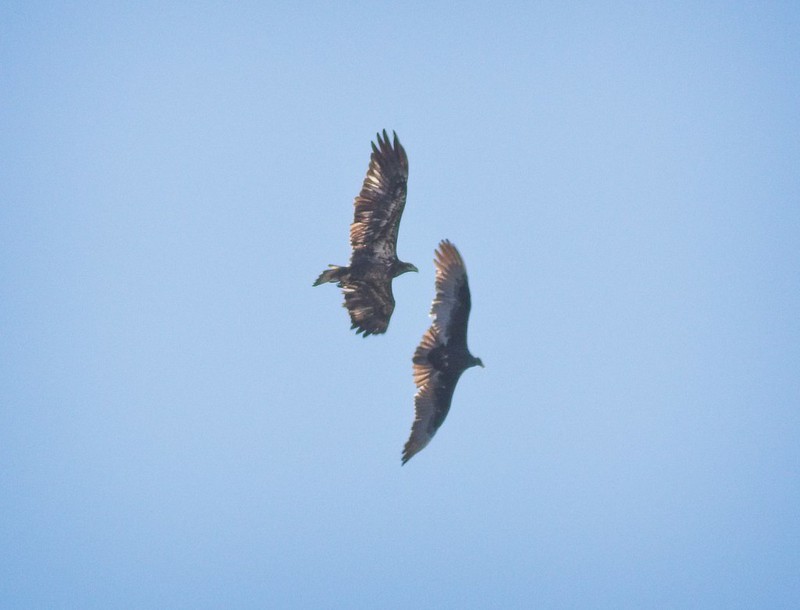 The eagle chased the vulture around for several minutes. I'm not sure what was going on as the vulture didn't have any food and seemed to be minding its own business, but the eagle was not happy having it around. 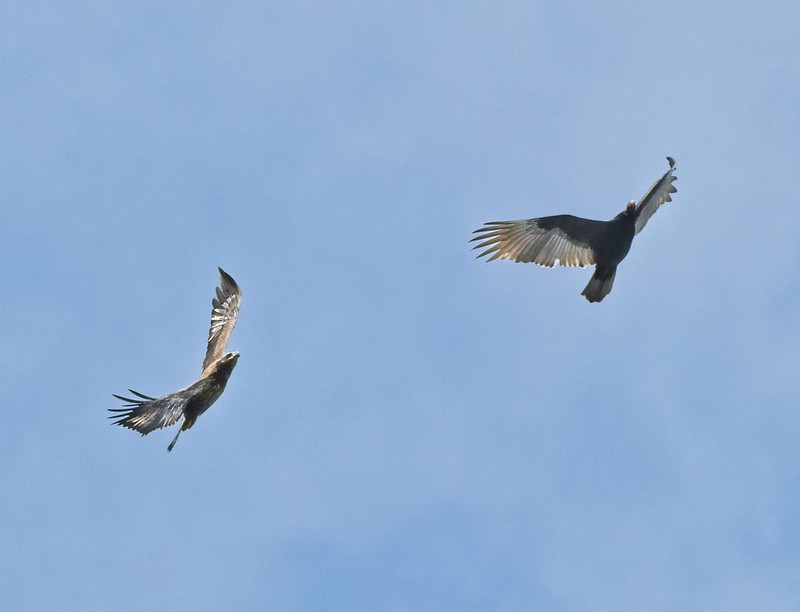 Meanwhile, on the ground in the preserve, this mellow Turkey Vulture rested in the rehab facility that is part of the aviary. Who could ever be unhappy with this doe-eyed sweetie? 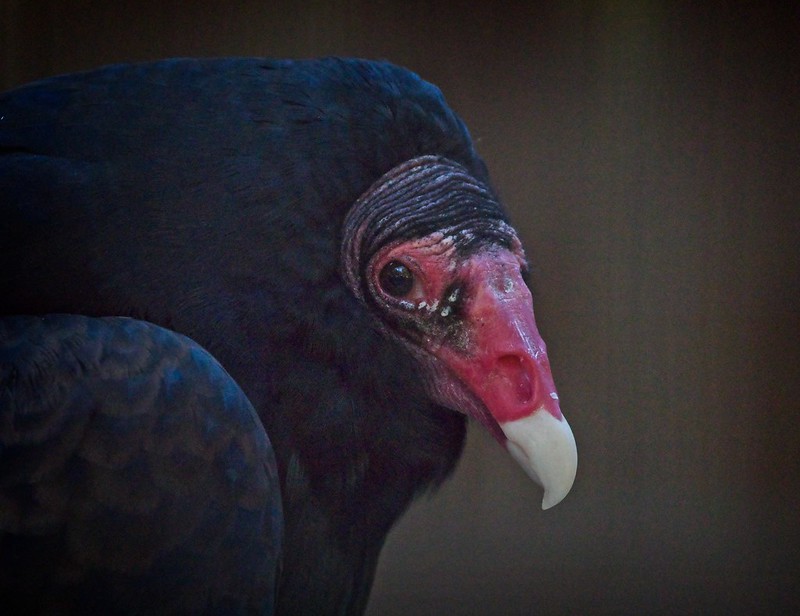 Back up at Cedar Key, I was able to get a closer look at an immature Bald Eagle who was just starting to get white adult feathers on its head. 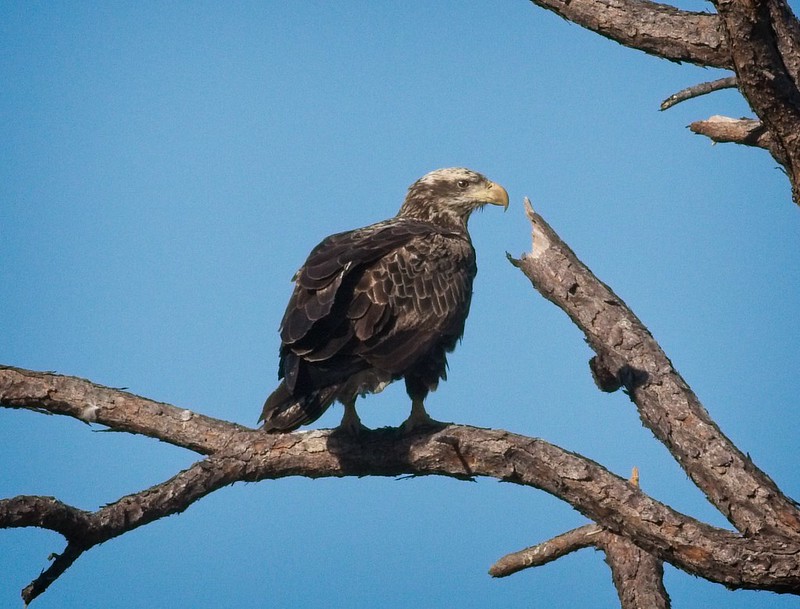 The eagle's head pattern reminded me of the Osprey, an ubiquitous raptor along the coast and waterways. The one below was seen at Fort De Soto Park, where I counted 38 ospreys in an area less than two square miles. 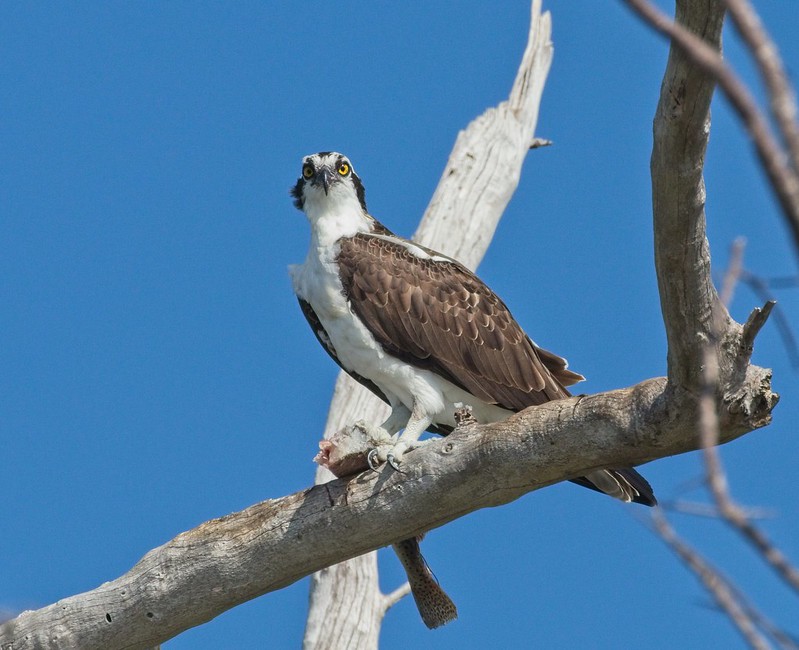 I think this Osprey is eating a trout. 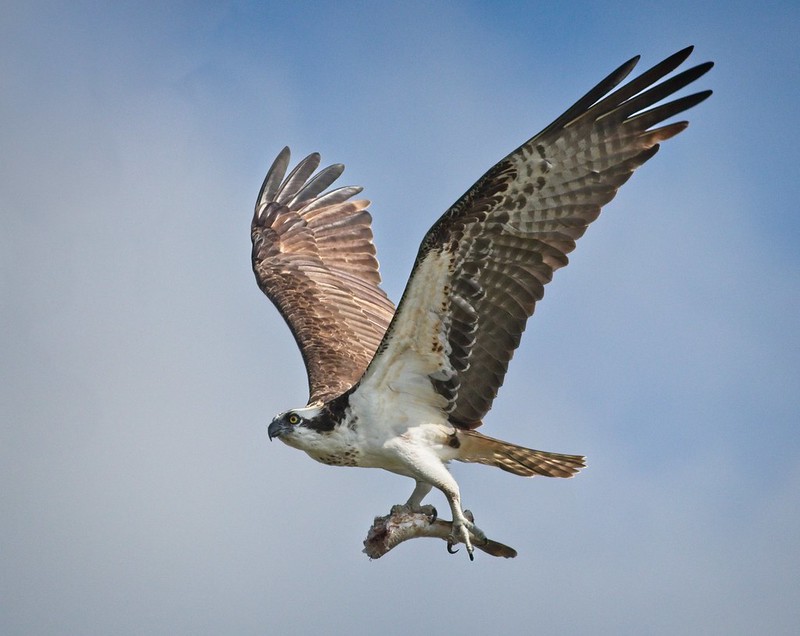 It's hard to see in this photo, but the Osprey on the right is carrying what looks like a Largemouth Bass. This pair was photographed at Cedar Key Museum State Park. 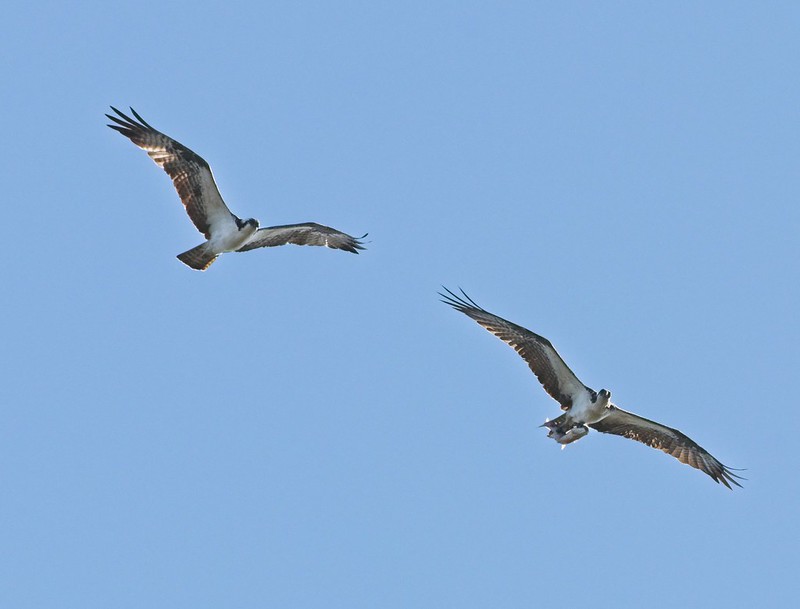 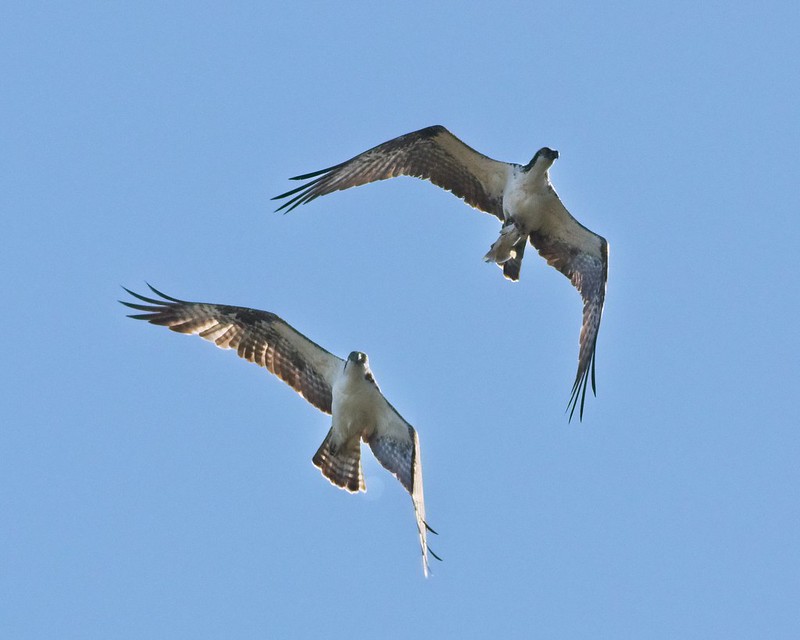 We see Ospreys here in the north during nesting season, so it was nice to see them on their winter grounds, enjoying the warm weather and fish, and not having many responsibilities.

That's exactly how I felt, too.