Christo teaches his kids how to catch a squirrel

Each day brings new developments with the Tompkins Square Park red-tailed hawk fledglings. All three are doing great and the whole hawk family has been staying close together within the park. Mom, Amelia, has been watching over all three kids while dad, Christo, shows them how to hunt and prepare food.

Tuesday morning (June 9), I found the whole family hanging out together in an elm tree on the west side of the park. This is one of the fledglings: 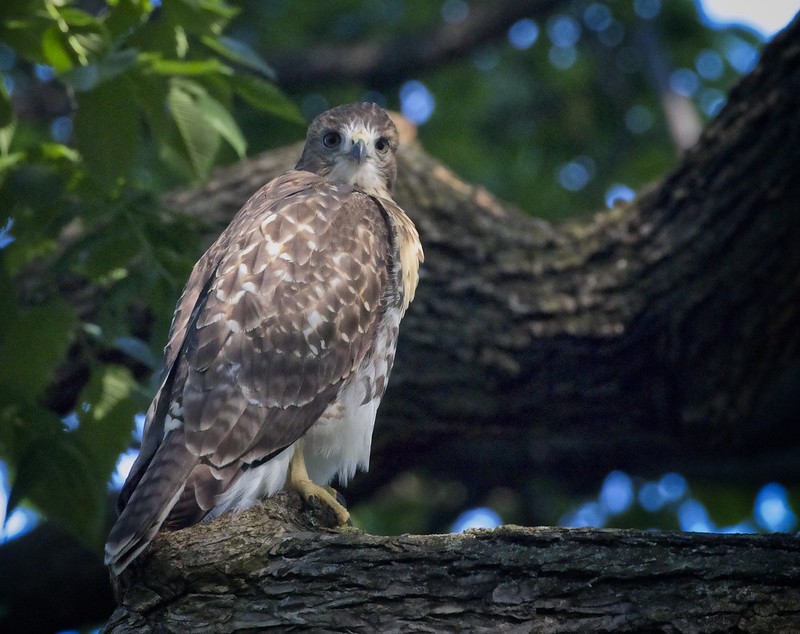 Another one perched nearby in a more relaxed pose: 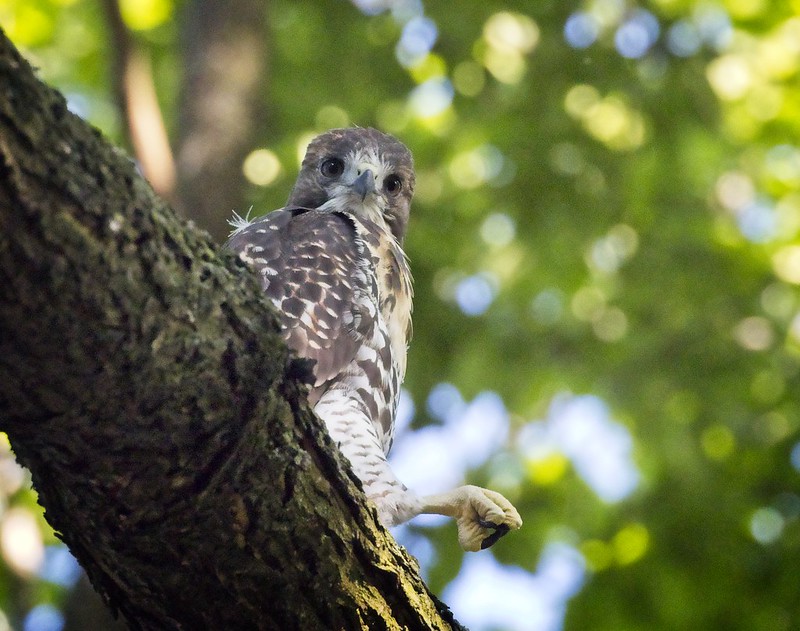 Most relaxed of all was the third fledgling, who spent the morning laying down on a branch. This is totally normal - the young hawks are just like little kids and will often take naps where ever they are. 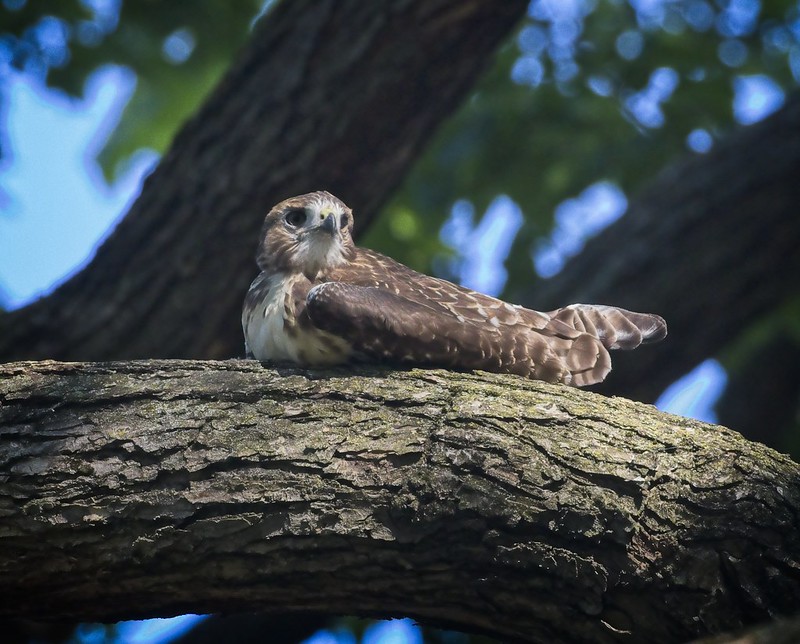 Amelia was also in the tree keeping watch over everyone. I caught her going after a squirrel who came too close. This squirrel, however, was too quick and agile, and got away unharmed. 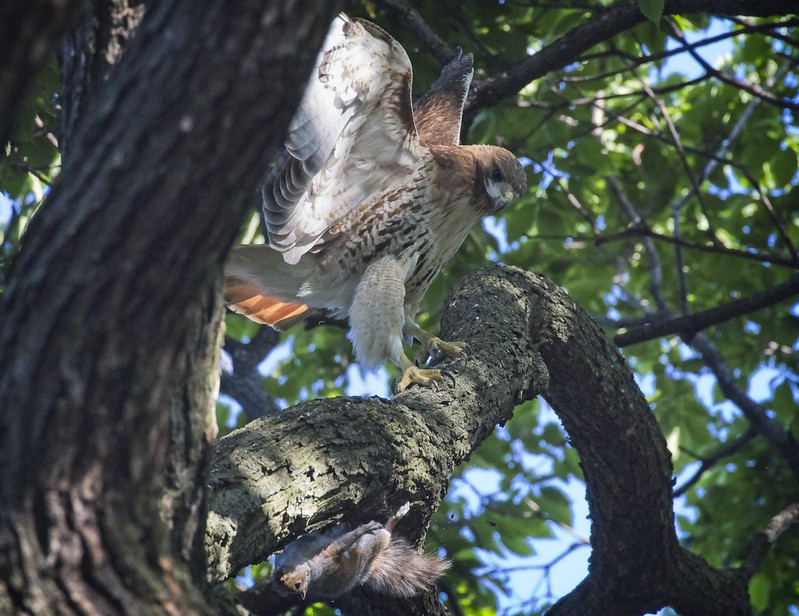 Down below, Christo was retrieving food from the ground that had been dropped by the fledglings. The youngsters are in the process of learning how to perch and hang on to their food at the same time, a feat harder than it looks. They often drop their food, but it doesn't go to waste as Christo will go get it and bring it back to the fledgling. We've seen him do this numerous times before, like in this post from 2016 when he demonstrated unwavering patience as he picked up a rat dropped into the bushes by his offspring. 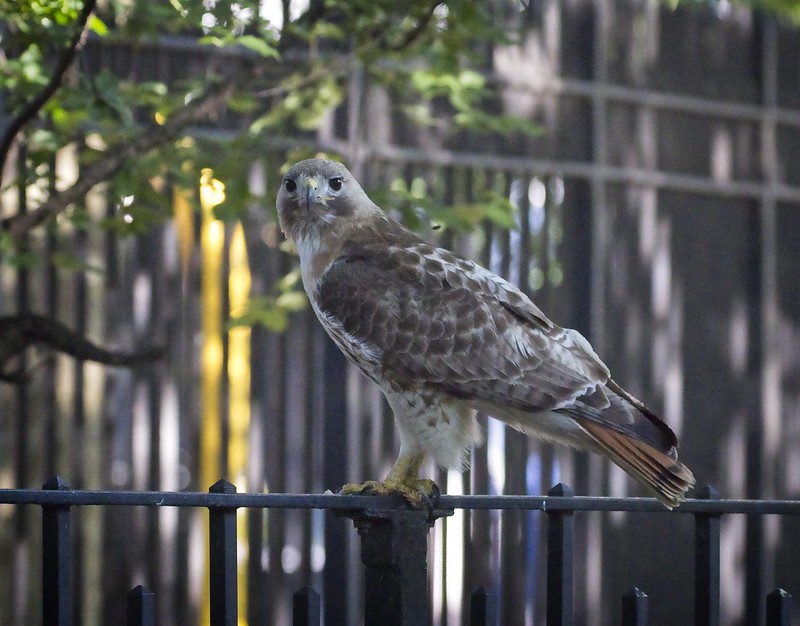 Christo walked around the tree a few times, looking for fallen food. 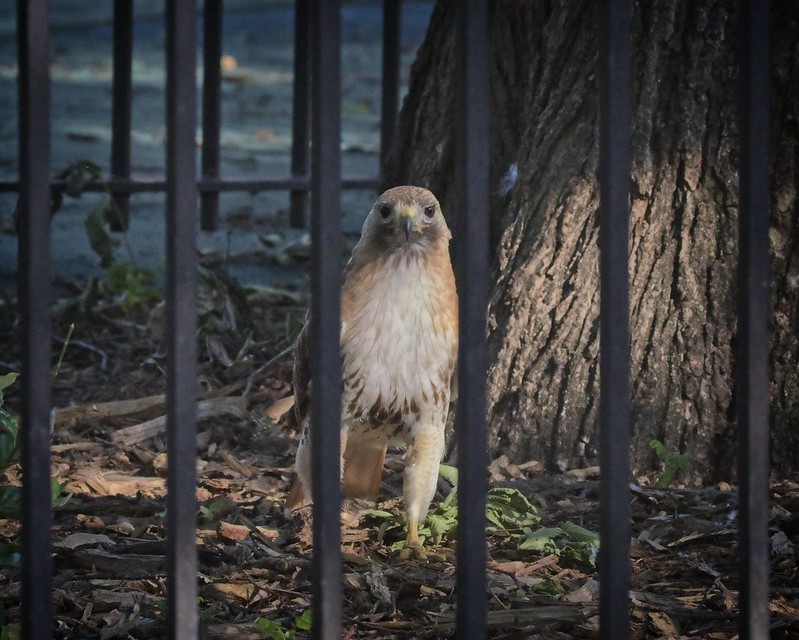 If you see a dead rat or pigeon laying on any of the pathways in the park, try to move it (grab a napkin or bag) to an area behind the fences where the hawks can find it later.

And they will find it later. When the lawns are clear of people and dogs, the fledglings will come down to play and eat. The one below found something tasty in the grass. 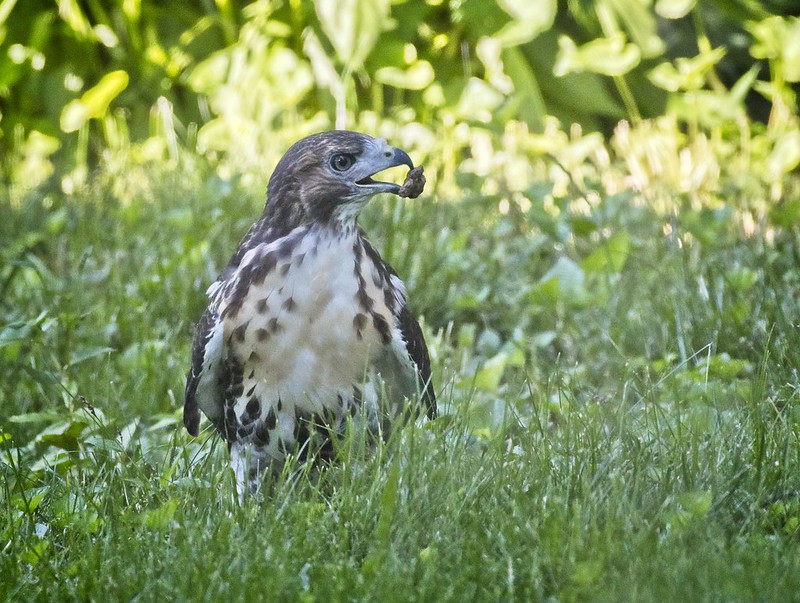 The fenced-in lawns and gardens provide a safe place for the young hawks to play and exercise. 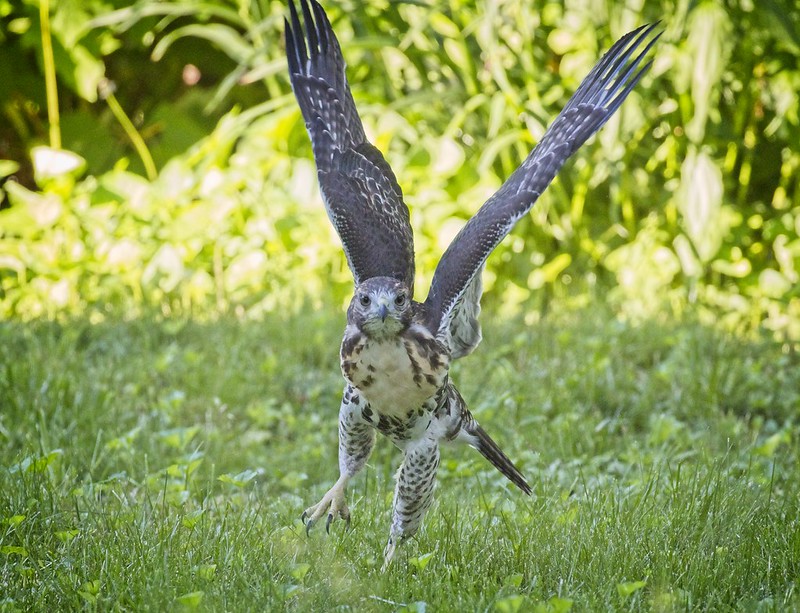 Later the same day, Christo caught a squirrel in the skateboard area in the northwest quadrant of the park. 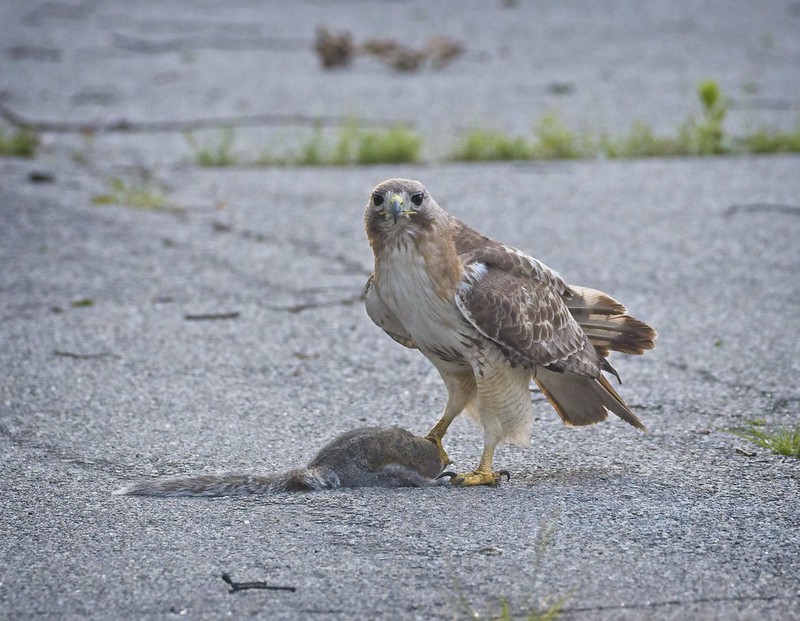 Two of the fledglings perched together on the surrounding fence and watched as Christo caught the squirrel. 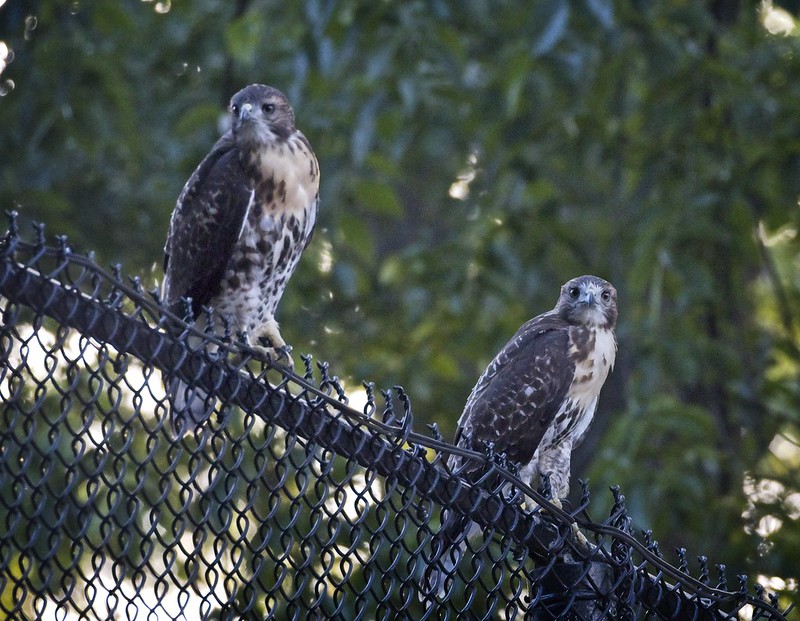 After the squirrel was neutralized, Christo took off with it, flying it past the fledglings... 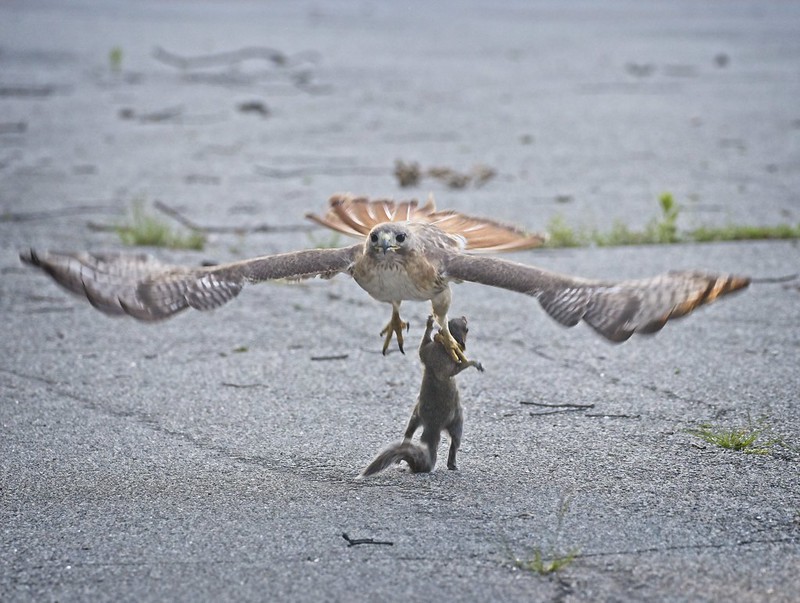 ...and straight towards me. 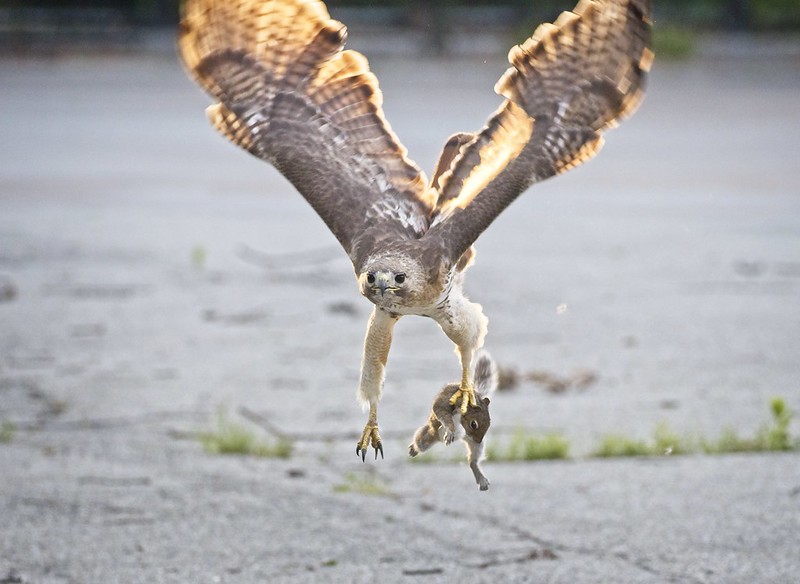 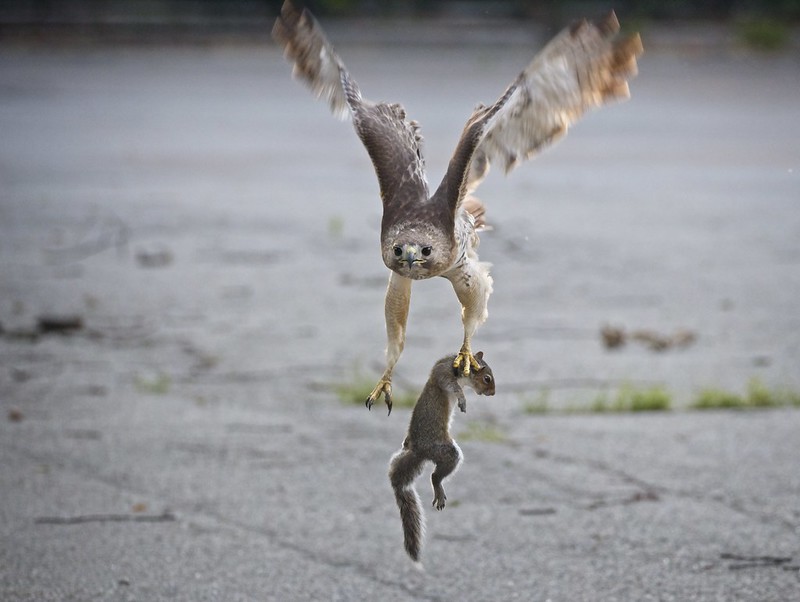 Note how Christo starts out gripping the squirrel with one talon, then pulls it up with both talons as he flies. We observed a similar maneuver in this post from February when he caught a giant rat and had to take off with it. 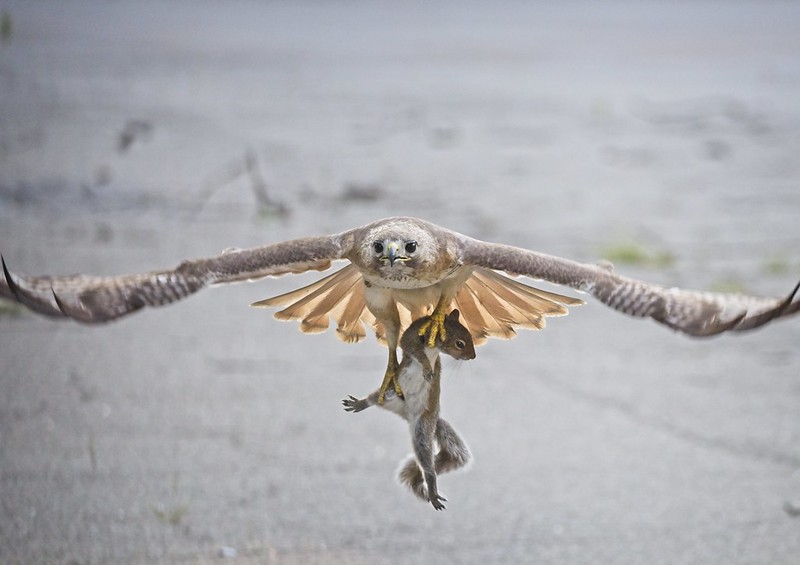 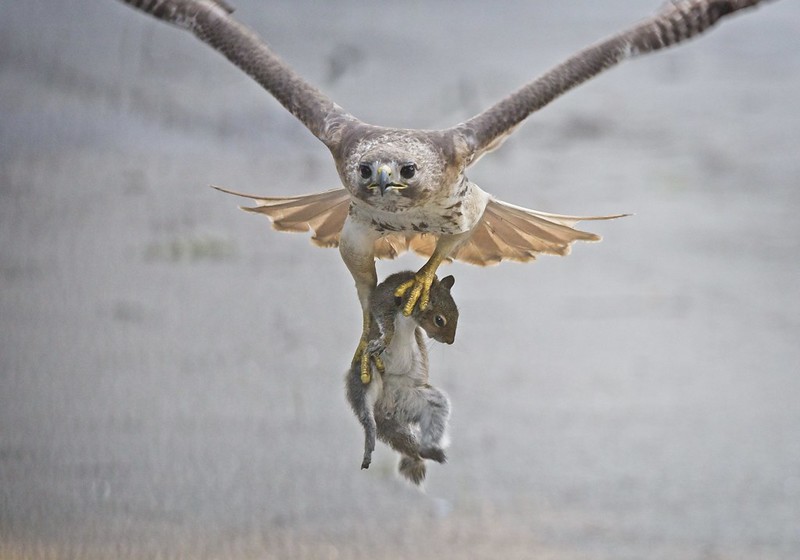 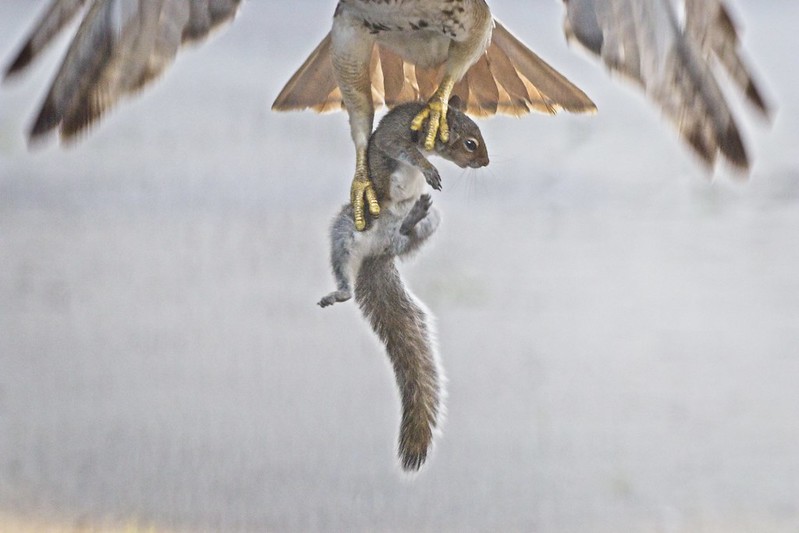 I was watching this from behind a fence, and at the last second, just as I thought the squirrel might end up hitting my camera lens, Christo pulled up and flew over the fence and behind me.

He dropped the squirrel off on a branch where one of the fledglings who had watched him from the fence flew over to claim it. However, the young hawk didn't quite know what to do with the squirrel and struggled to bite into it. As the hawk tried to work out how to get the tasty bits out, the squirrel dropped to the ground and the baby cried for Dad. 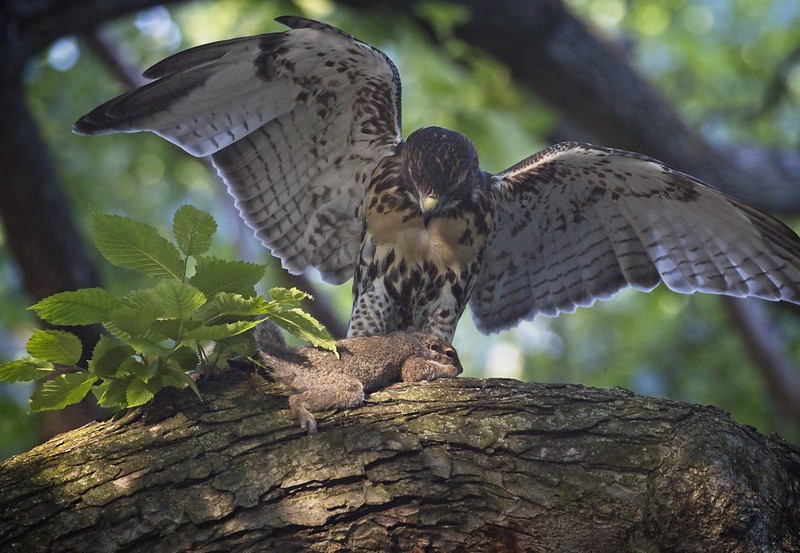 Christo responded, retrieving the dropped squirrel from the ground, and flew it up into another tree. 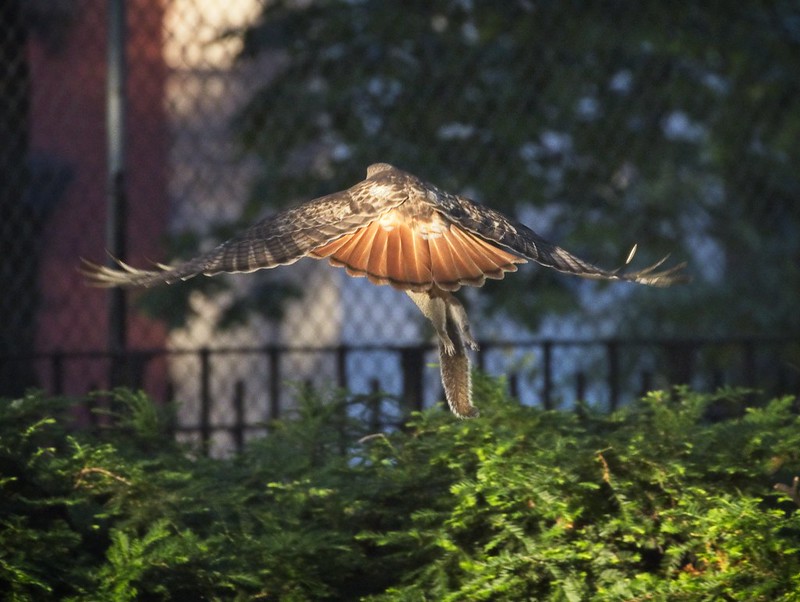 The fledgling followed and Christo tore the squirrel into little pieces and fed the kid directly. 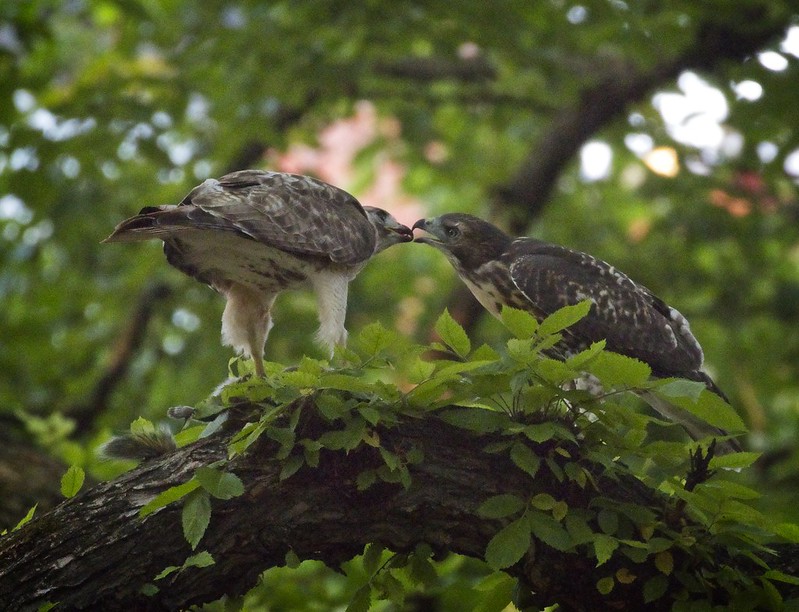 Meanwhile, the other fledgling who had observed Christo catching the squirrel was trying to repeat what it had seen dad do. 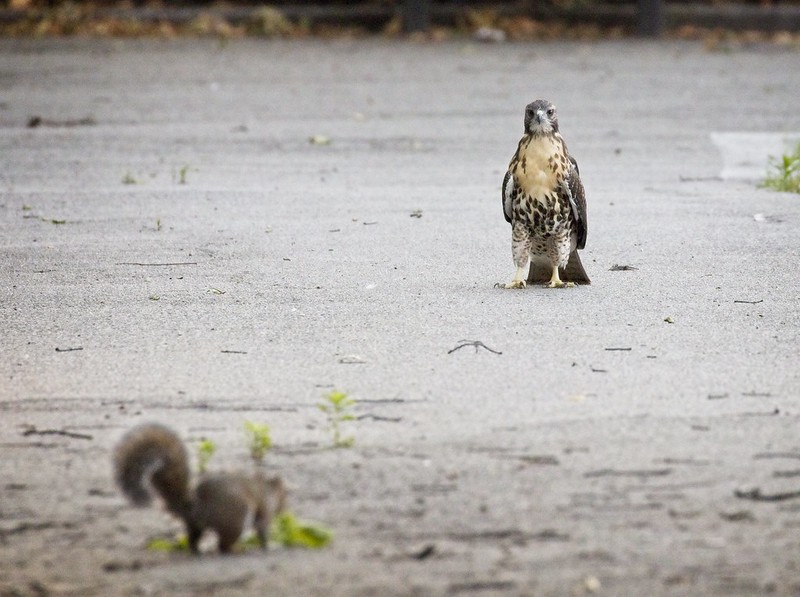 Soon...
Posted by Laura Goggin Photography at 10:46 AM