Now that the Tompkins Square Park red-tailed hawk fledglings have mastered flying, swooping around the park like pros, they're focusing on catching a meal. To date, none of the fledglings have caught live prey that I know of, but they're getting close.

The youngsters still have that wide-eyed curious look that I really love. The world must be a fascinating place for them. 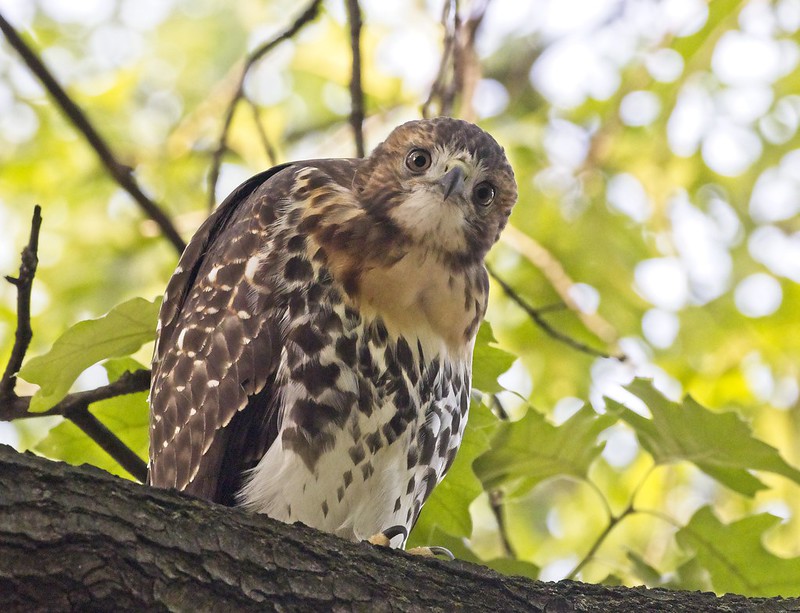 Sometimes, though, they look like adults. I caught this fledgling perched on a fence on a recent morning, looking very serious. 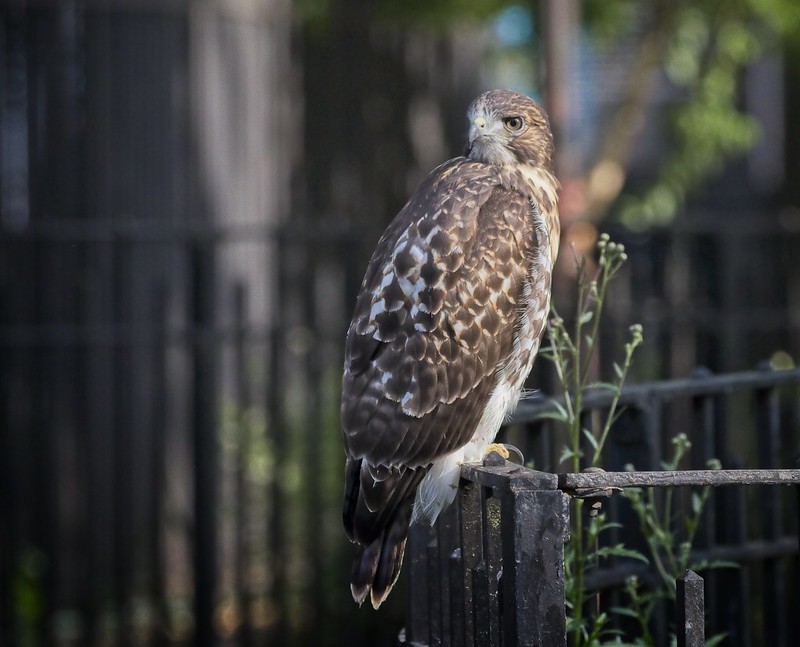 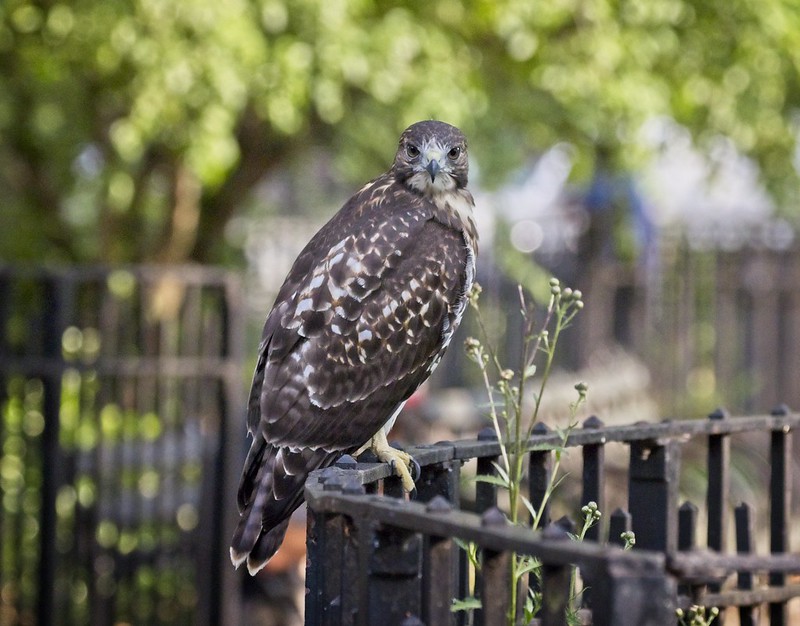 People ask me how to tell the difference between the adults and the juveniles. One easy way is to look at the tail. The fledglings all have brown banded tails, like the one pictured above, and the adults have rusty red-orange tails.

Behavior can also be an indicator. The fledglings can often be found playing on the ground or perching low on fences, like the one below. 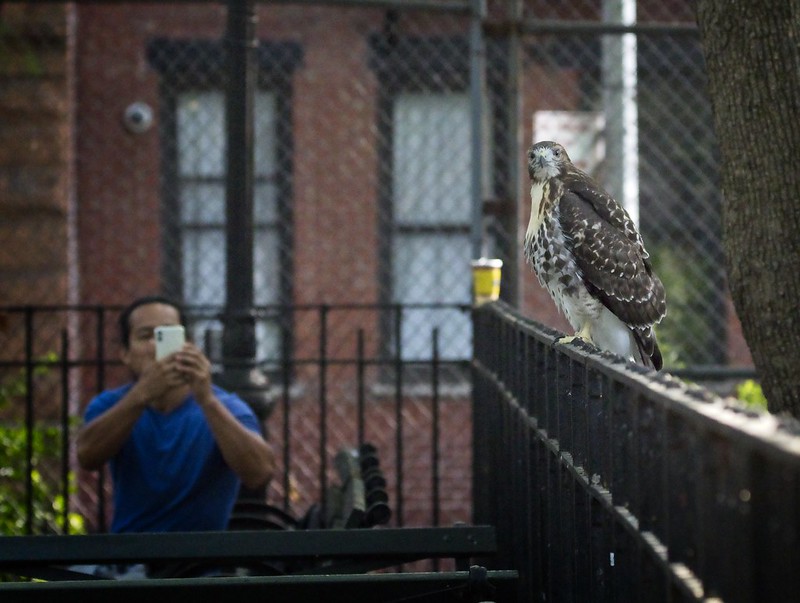 However, this is not always the case as dad Christo will often perch on a fence while he's hunting, or go to the ground to pick up food. Mom Amelia does not usually display this behavior, preferring to stay on higher perches.

The fledgling below practices pouncing for prey. 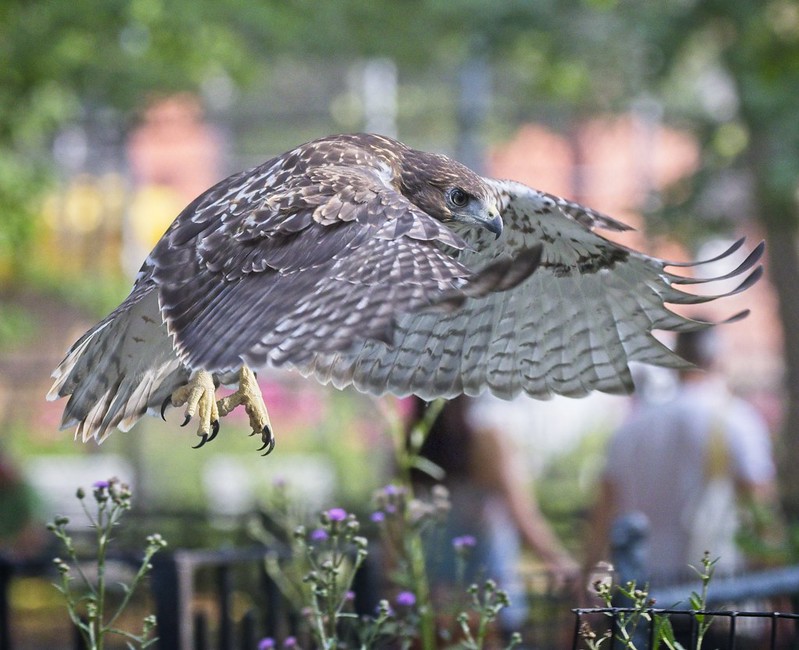 This one swoops down on some leaf litter. 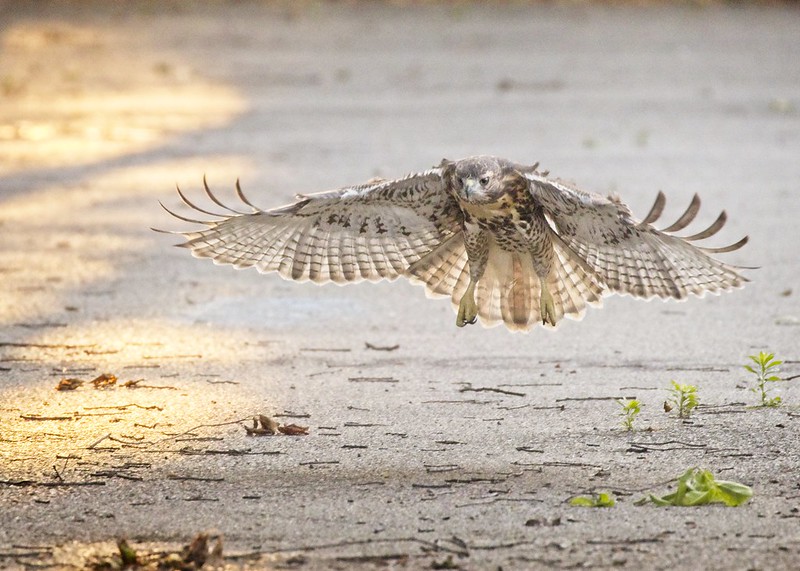 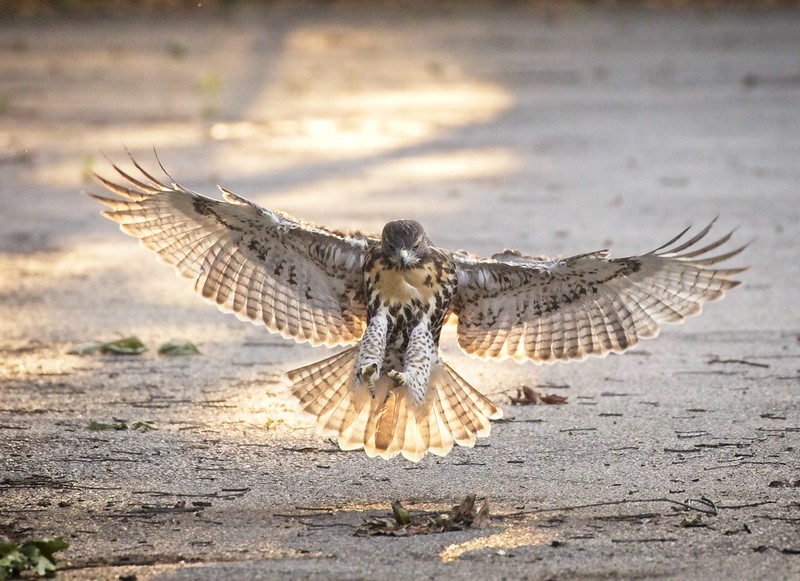 This one found an earthworm moving across the pavement and watched it for a while. 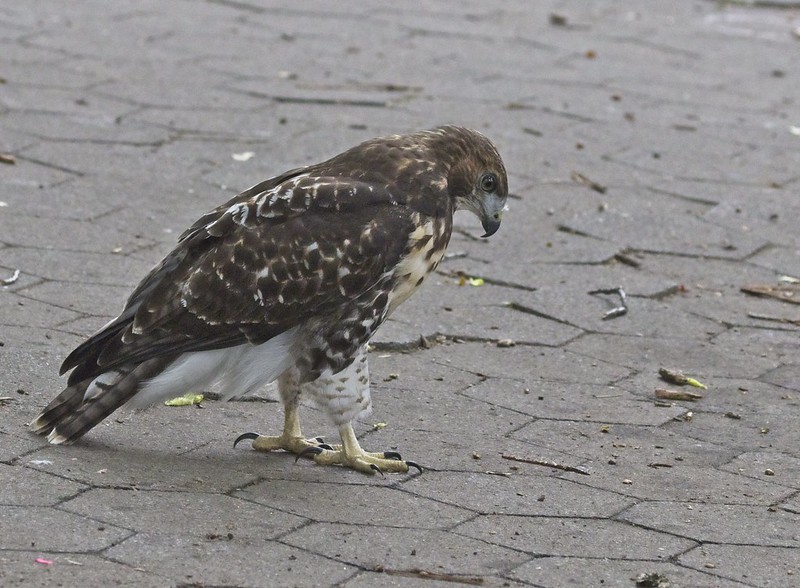 After deciding the worm was edible, the hawk ate it. Could this count as catching live prey? Maybe so!
The worm-eating reminded me of one of the fledglings from 2018 who caught and ate a caterpillar. 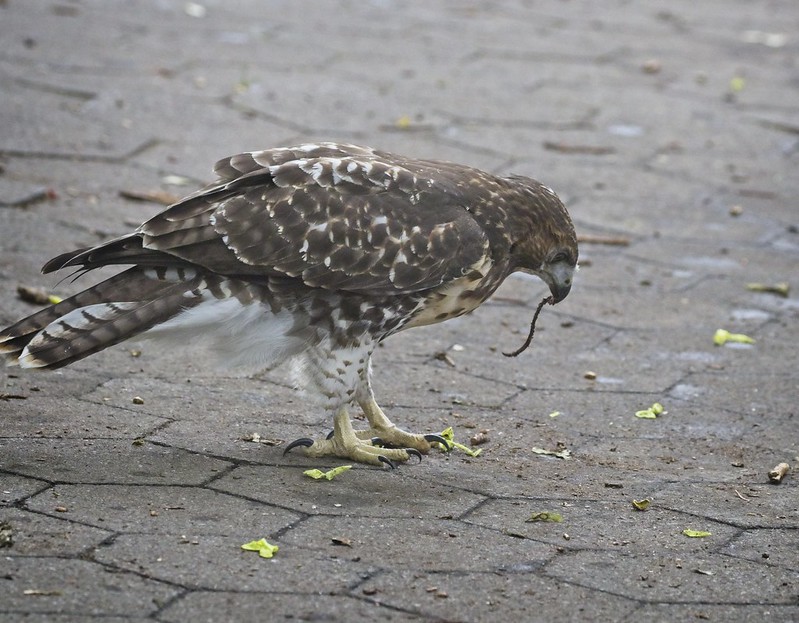 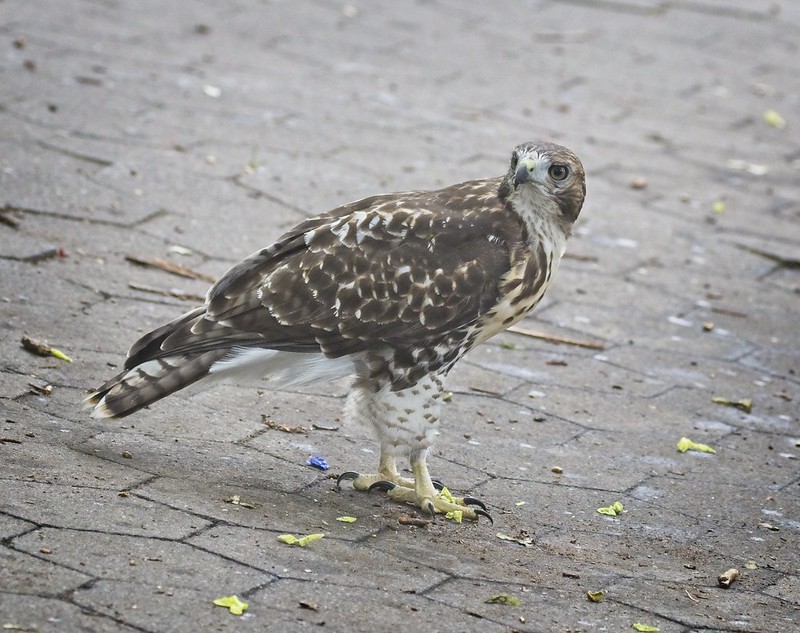 Fueled by earthworm, the fledgling chased after a stick. 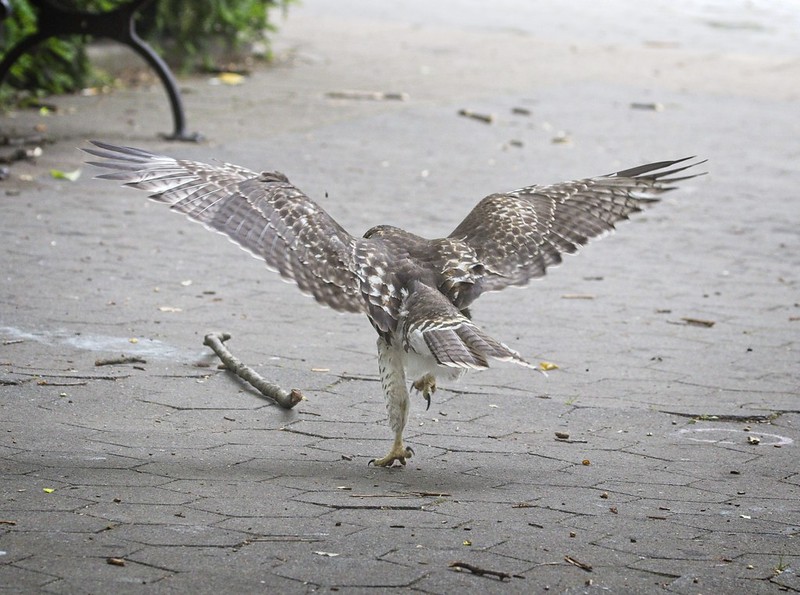 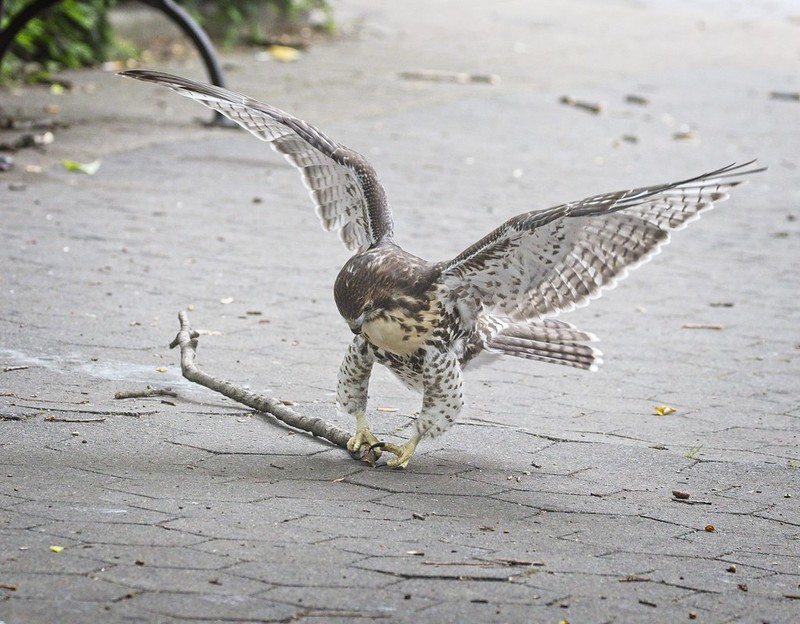 Hmm, now what to do? Maybe just stare it down for a while. 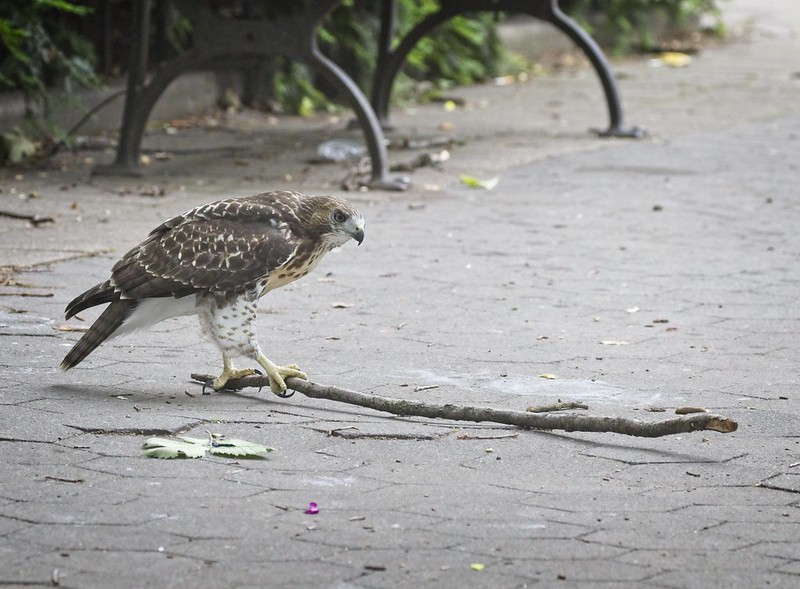 A short while later, the real prey comes into view. The fledglings have been having quite a time chasing after squirrels but not catching them. 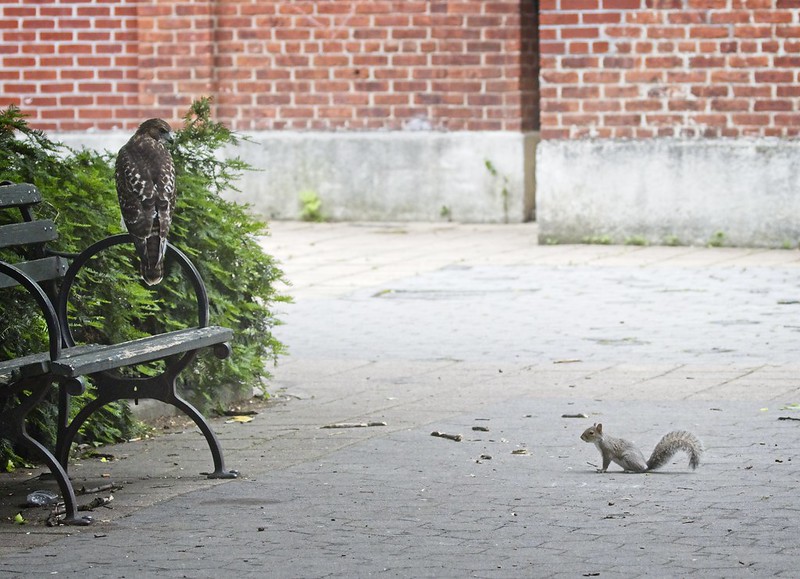 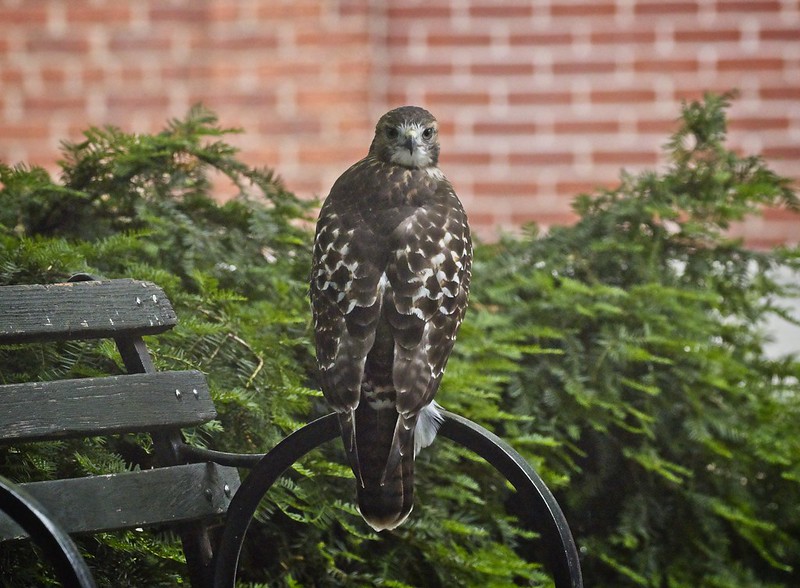 The hawks have many admirers, and these fans keep a respectable distance. 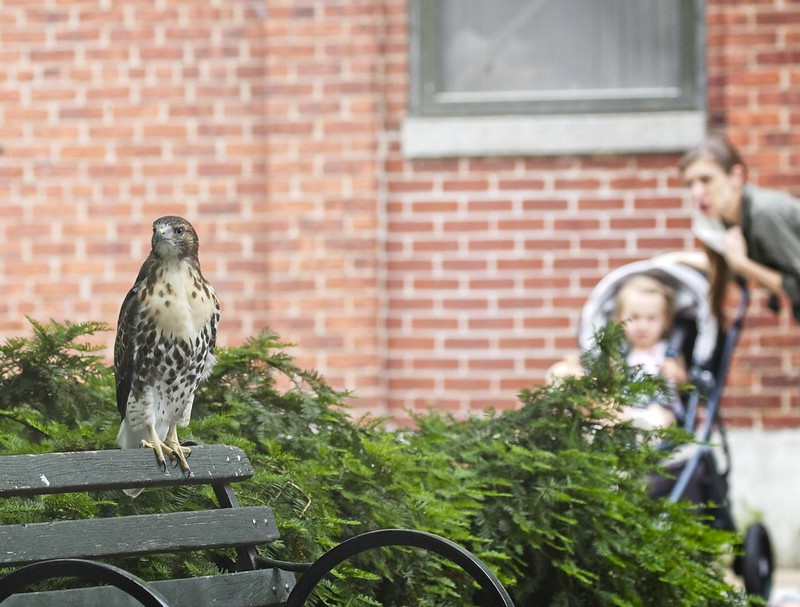 While the one fledgling was chilling on the bench, one of the others was taking a foot bath in a puddle in the skateboard/basketball area. 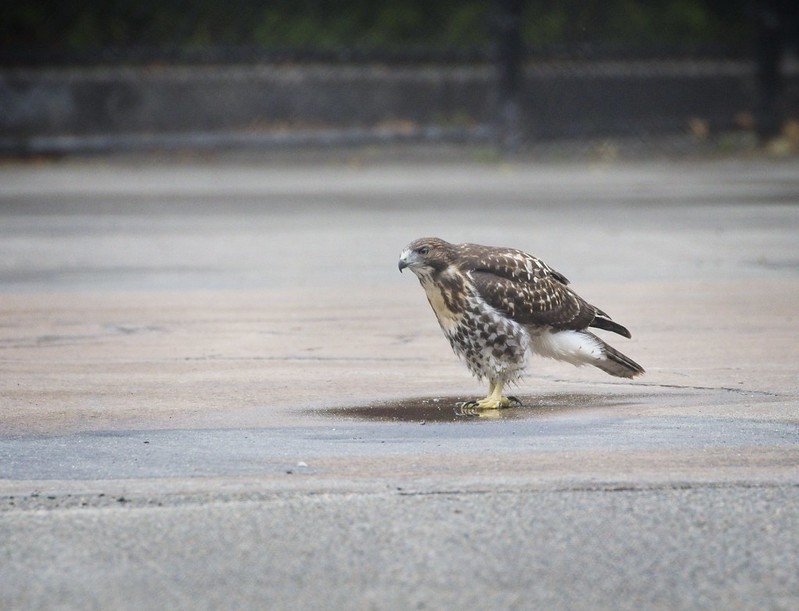 Why not lie down and take a full-body bath, too? 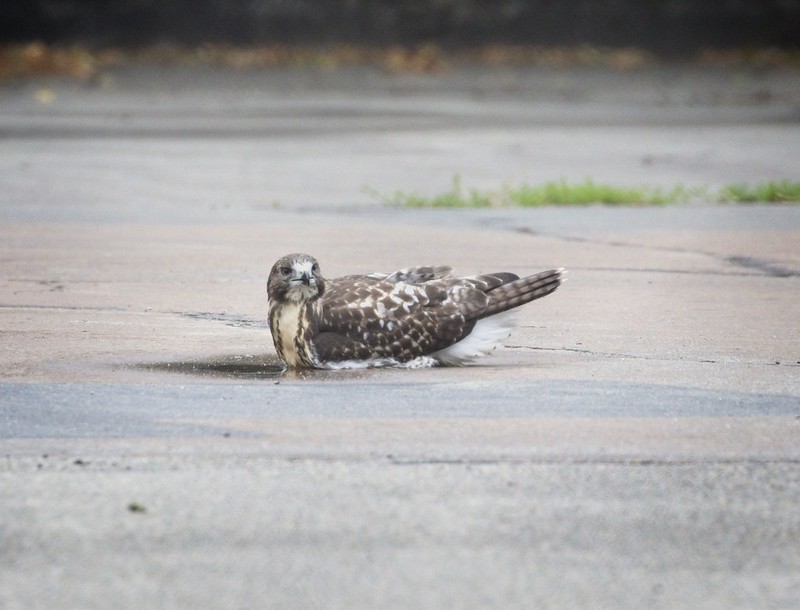 As I was watching the two young hawks, I looked up just in time to see dad Christo coming towards me with a breakfast rat. 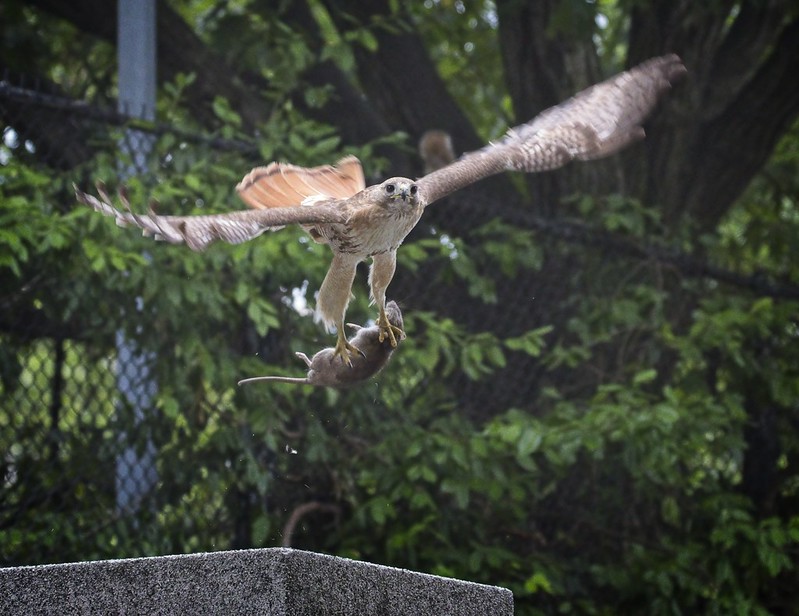 These two were on the fence behind him looking terrified. 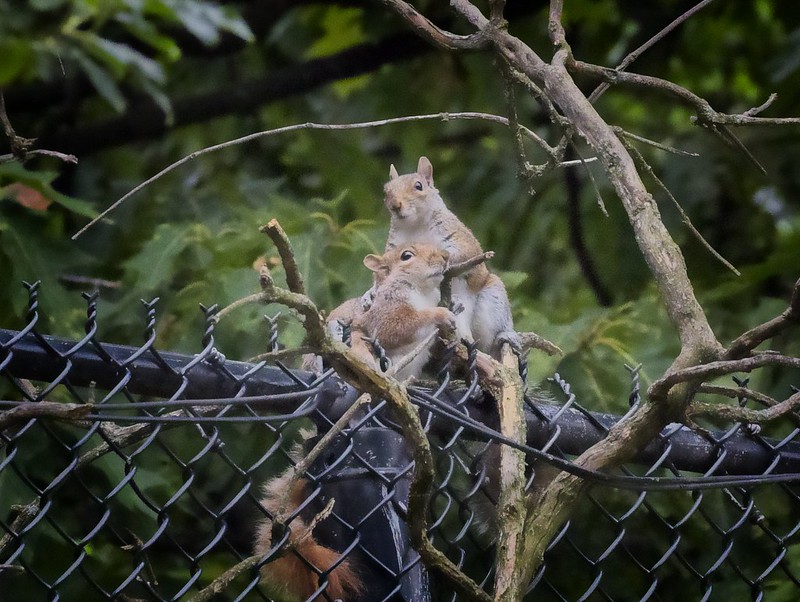 This rat looks big enough for a meal for two. 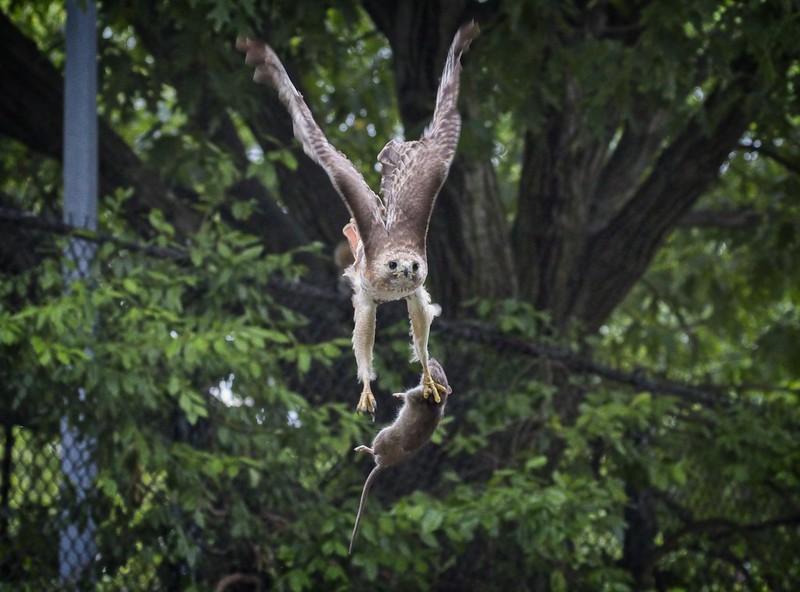 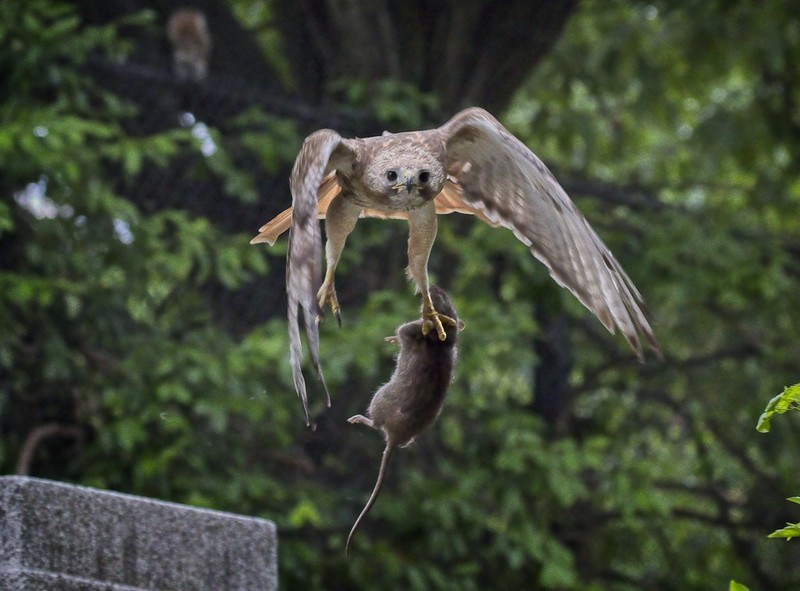 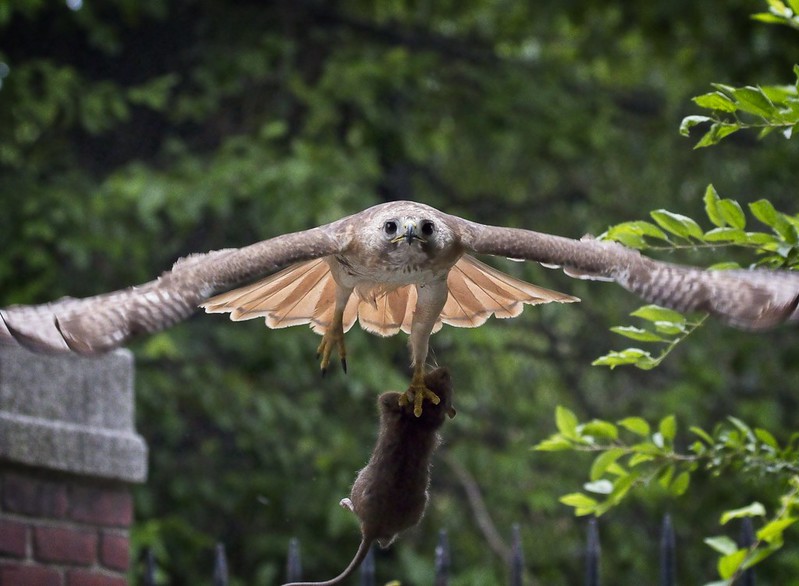 I really appreciate that Christo gives me very close looks at his prey catches. 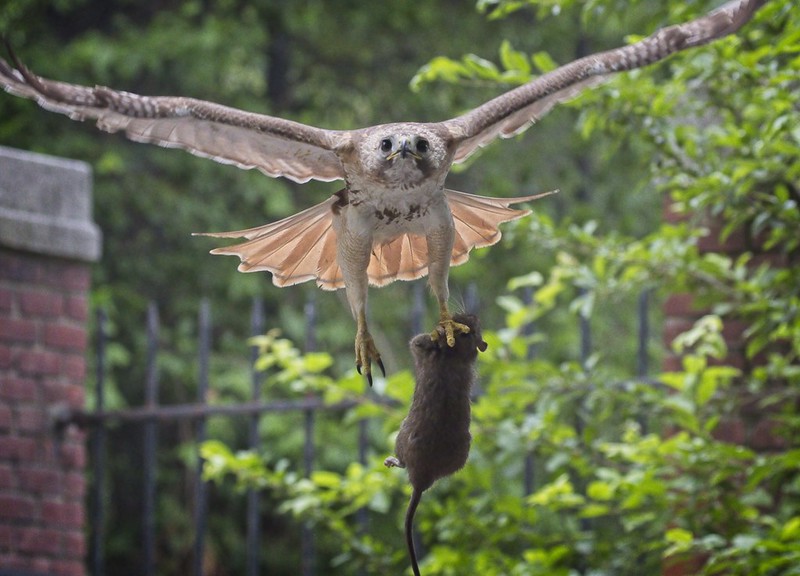 He flew the rat up into a tree where the fledgling who had been taking a bath came over and let dad feed it breakfast. 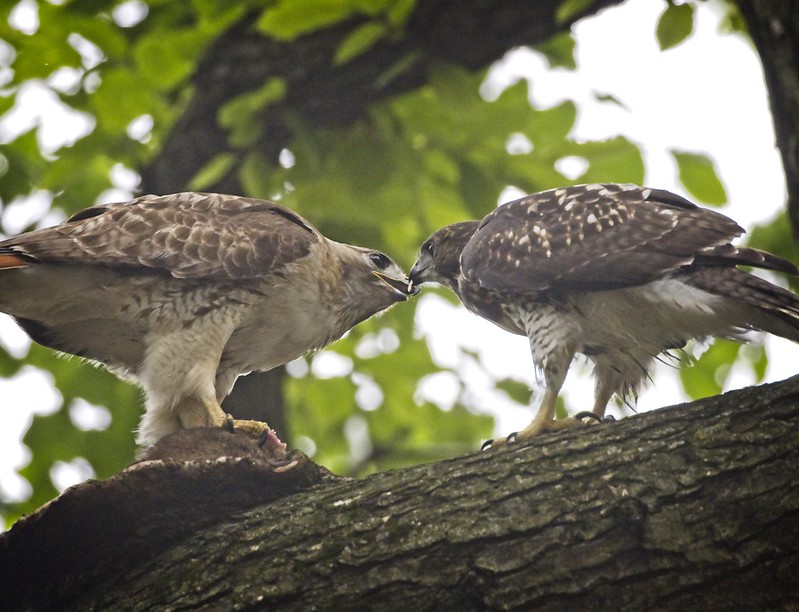 So sweet! Parents Christo and Amelia will continue to feed the kids until they are able to catch their own food and feed themselves.
Posted by Laura Goggin Photography at 4:28 PM