The Tompkins Square red-tailed hawk fledglings have been advancing so quickly, I'm already behind on posting photos. Each day brings a lot of activity and it can often be hard to keep up with the little guys. This is good news as it means they are healthy and doing really well. 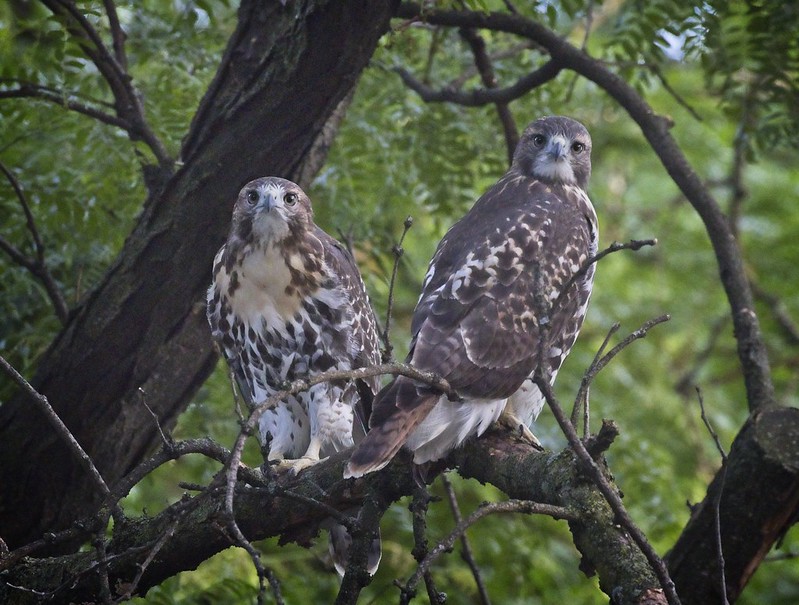 Today marks the first day the playgrounds and dog run are open again in Tompkins Square Park since the city went on lock-down several weeks ago. Until now, the young hawks have been using the closed areas to play and practice their hunting skills, so they will need to adjust to the new environment.

Even dad Christo (below) has been taking advantage of the lack of human activity in the skateboard/basketball area to feed his kids on the ground and drop food off for them to practice hunting. 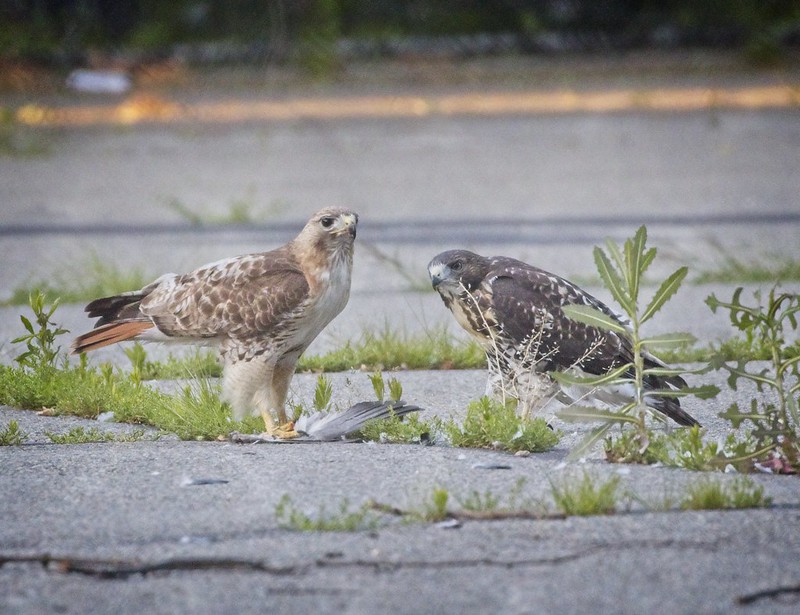 In the photo above, you can really see the difference in coloring between Christo and the juvenile. Christo has the red tail, but he is also a much lighter brown overall, and lacks the heavy dark speckling on his belly.

The young hawks have been using sticks and leaves to hone their hunting skills. 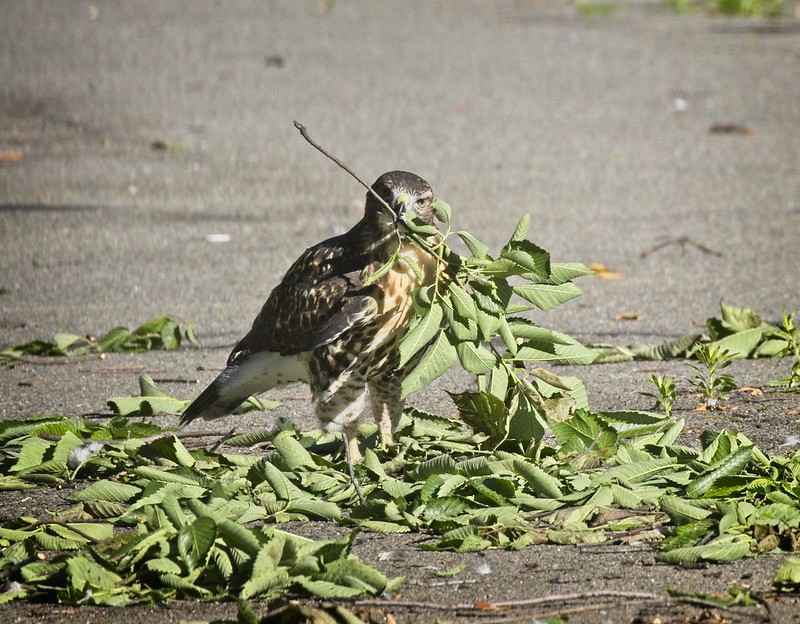 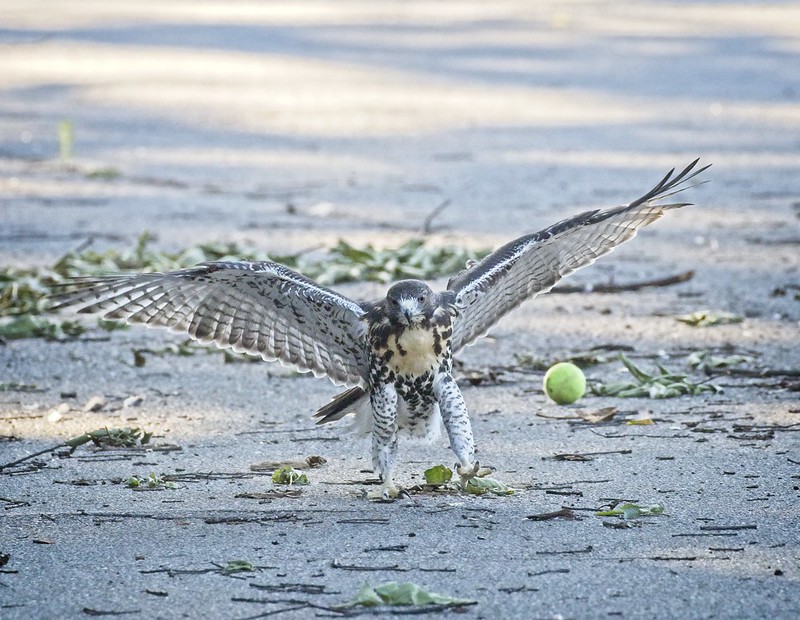 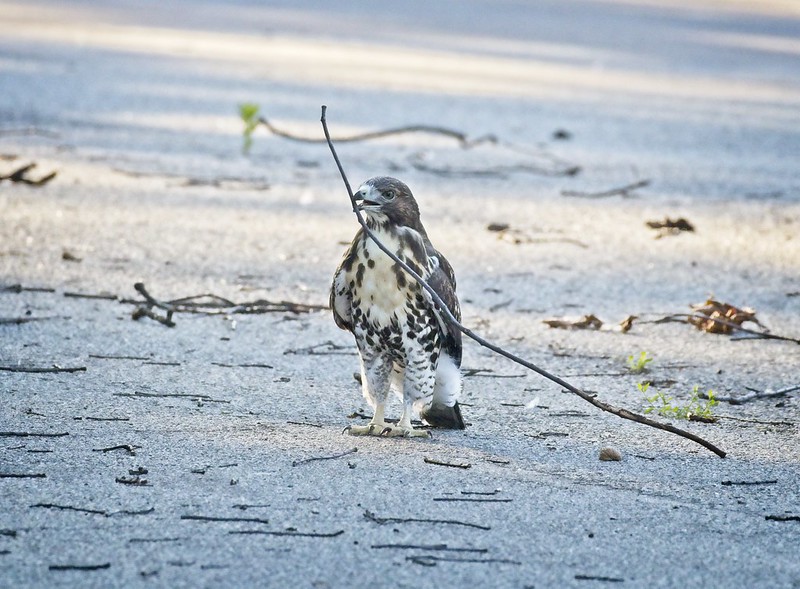 I never saw any of the hawks interested in the tennis ball that's in these photos. I believe it was left behind by someone and not placed there deliberately. It would be unethical to bait the hawks with food or objects in order to get a photo. They seem to prefer natural playthings anyway. 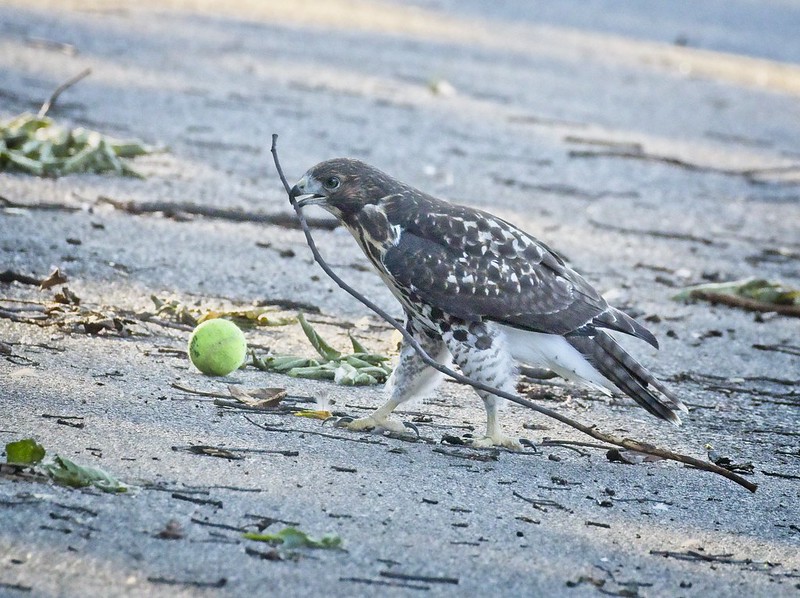 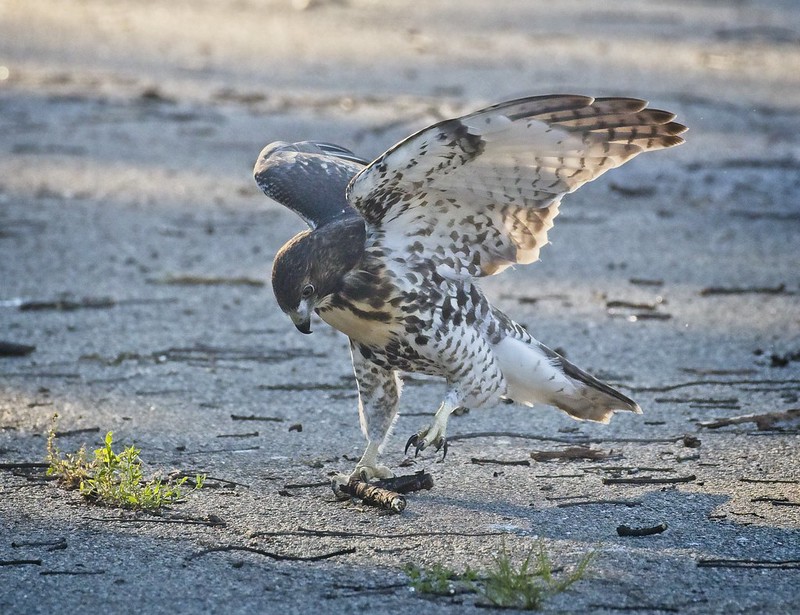 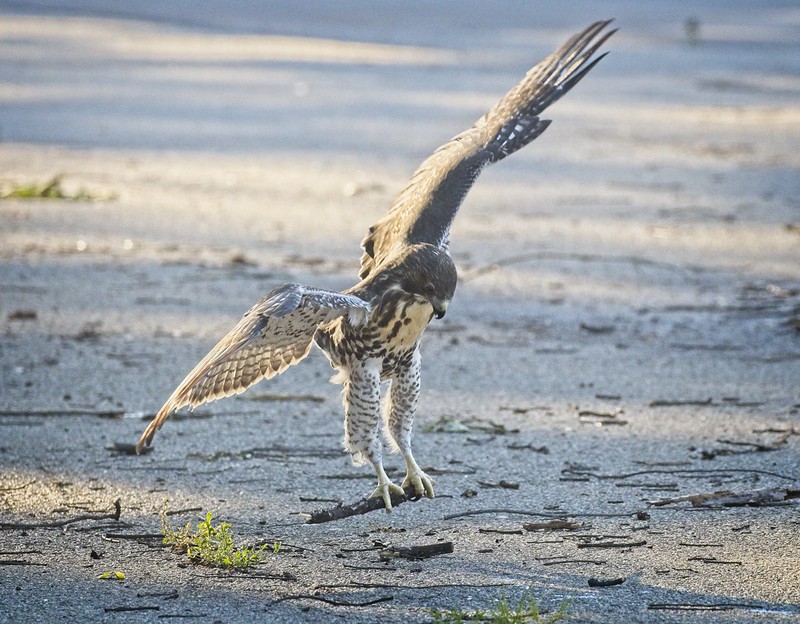 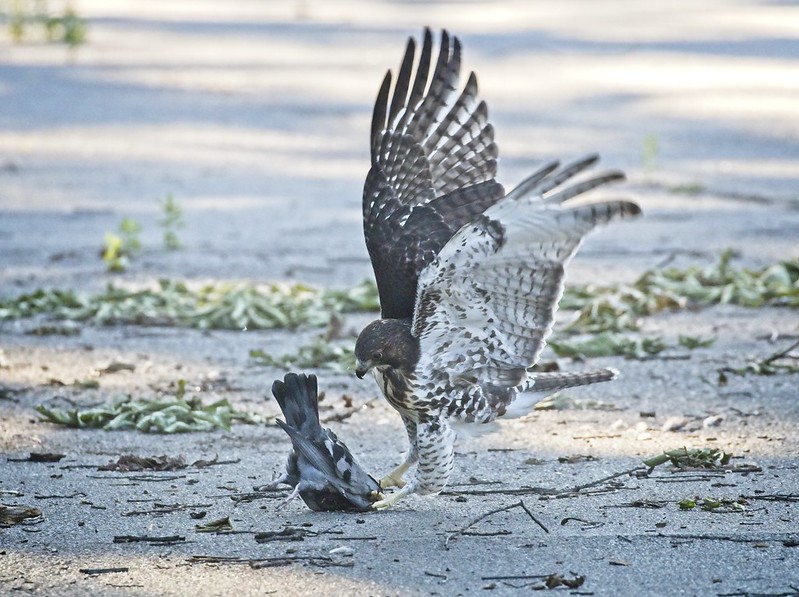 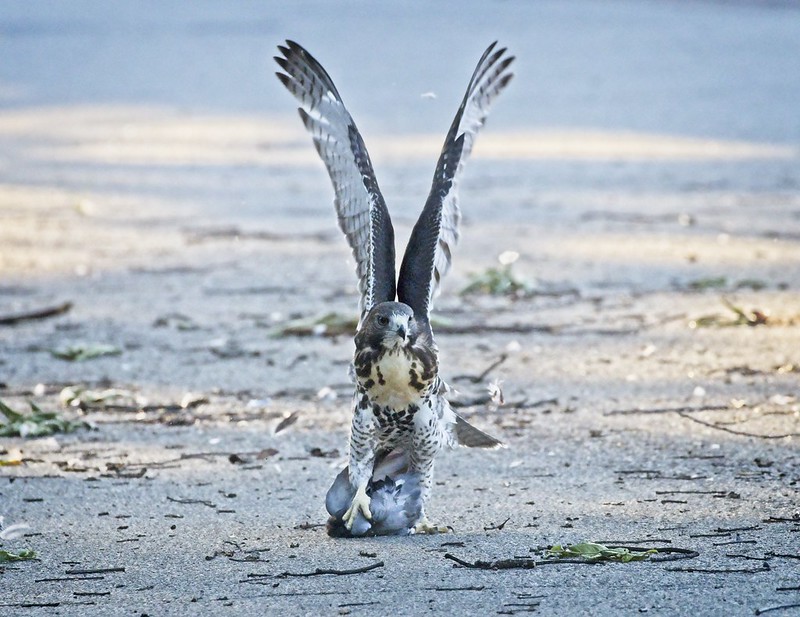 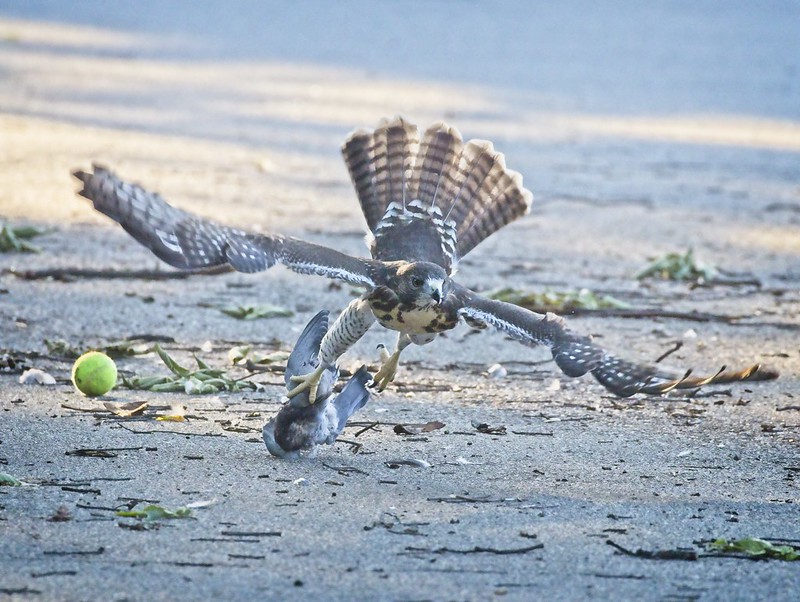 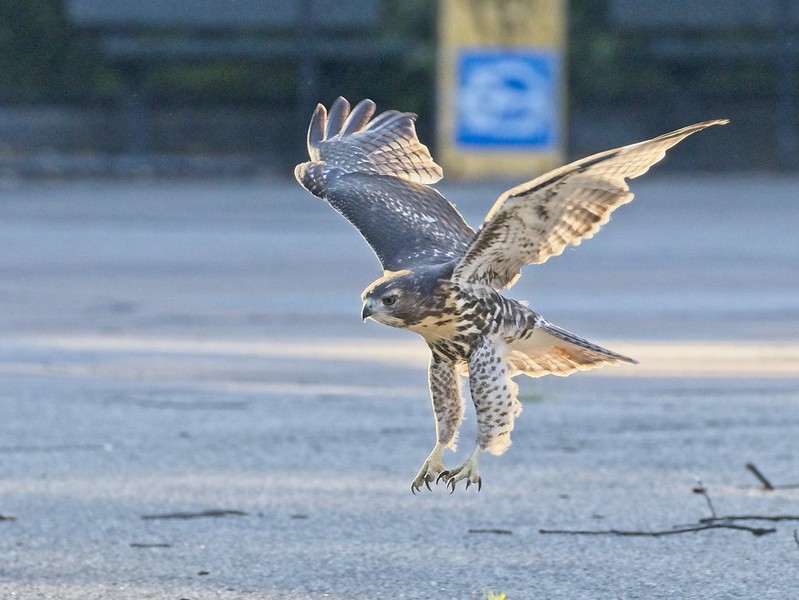 While Christo has shown his kids how to catch squirrels, to date, none of them have managed to get one on their own. 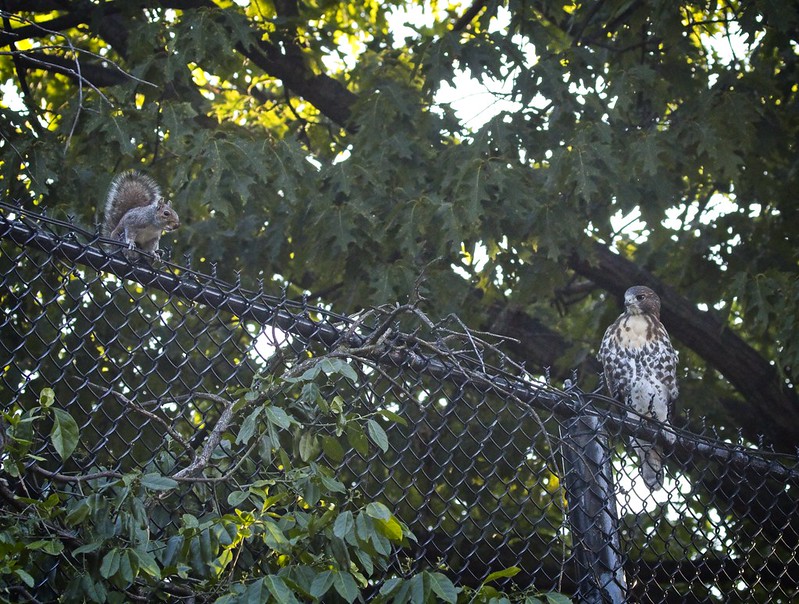 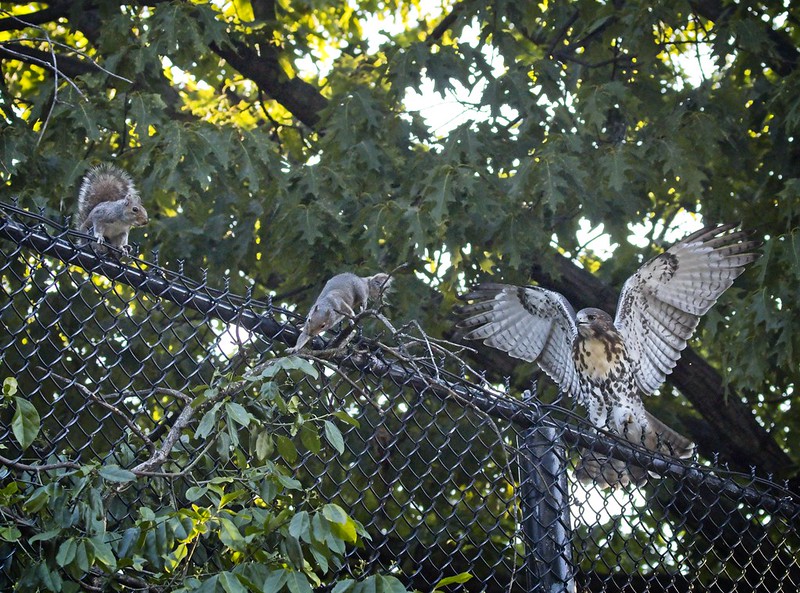 Parents Christo and Amelia are still watching over the fledglings very closely and are providing food when necessary, but I've noticed they are pushing the young hawks more and more to try and catch their own meals. Until that happens, mom and dad are still on hand to provide assistance. Below, a fledgling begs Amelia for a bite. 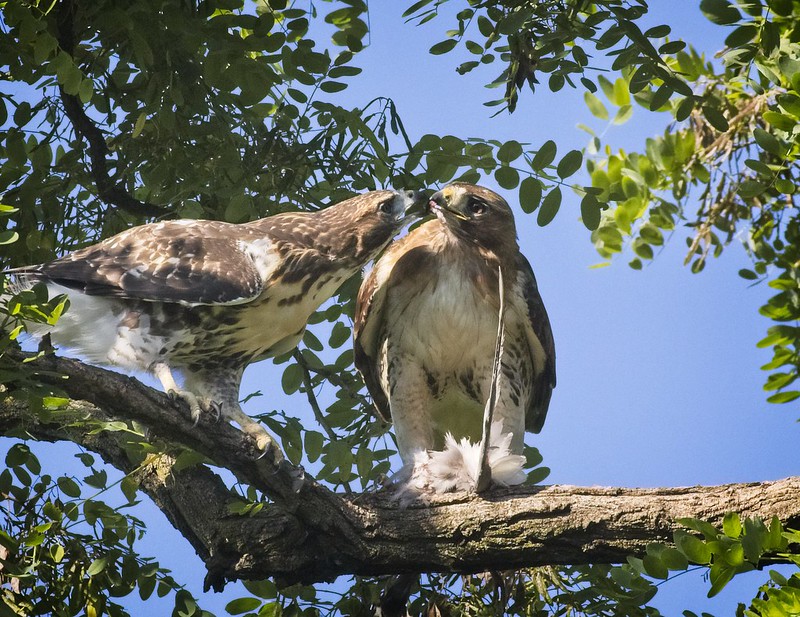 As soon as it could, the fledgling snatched the pigeon away from Amelia and flew it to another tree. This is an important skill for the hawks to learn.  Although the hawk successfully carried the food away, it didn't do so well landing with it. This is another feat they must all learn as they go. 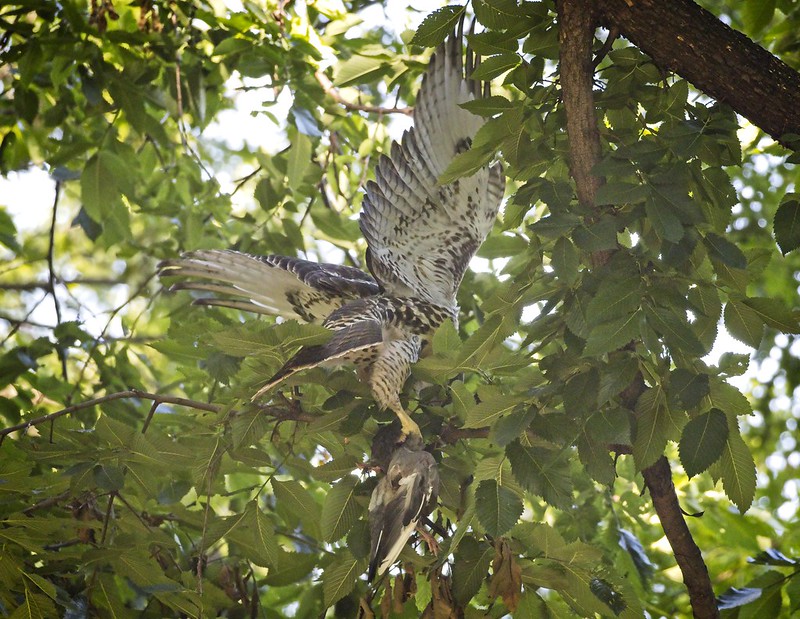 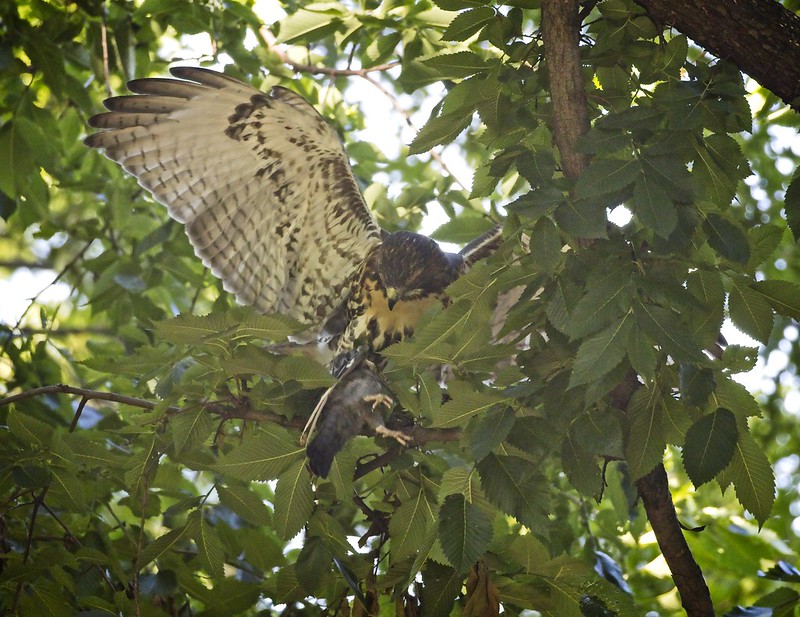 Perching on a branch without dropping the food is harder than it looks! 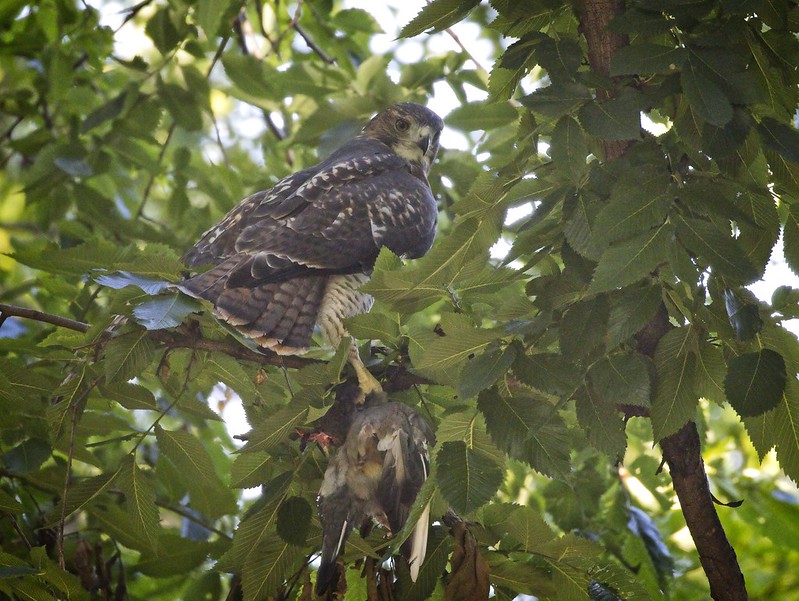 On this day, this fledgling did something else I'd not yet observed - it made an adult hawk cry. Until now, all the young hawks have been making adolescent squealing sounds, but something caused this fledgling to let out a classic red-tail scream.

Another milestone achieved this week was leaving the park. One of the fledglings was seen perched on the cross of St Nicholas of Myra church on Avenue A and 10th Street yesterday morning. Later in the day, I saw one (not sure if it was the same one) perched on a building. As far as I know, this is the first time any of them have ventured outside the park boundaries.

People have been asking me how long the the hawks will stay in the park. There's no set deadline, but based on past fledgling behavior, they usually stick around to mid-July or early August. We've seen some fledglings stay as long as September, but they are all different and it mostly depends on how quickly they learn to feed themselves. Once they are no longer dependent on their parents, there is nothing to prevent them from exploring the larger world.

Until then, every moment with them is precious and I am so grateful to be able to observe them regularly. Their antics have been keeping my spirits up during this extremely stressful time. 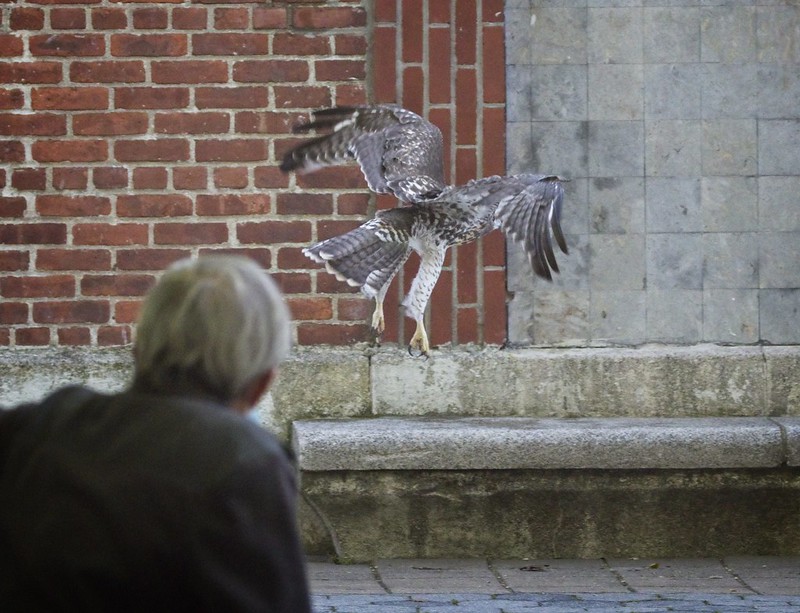 As the hawks continue to learn how to hunt and get more bold exploring their environment, we need to be aware of them and be careful not to interfere with what they're doing. The fledglings have a high tolerance for human activity, but they have to learn to be wary of people in order to stay out of trouble.

A few days ago, this fledgling made a brief visit to the main lawn when it was crowded with people and dogs. These people respected its space and left the hawk alone, but the bird was in a very vulnerable position. 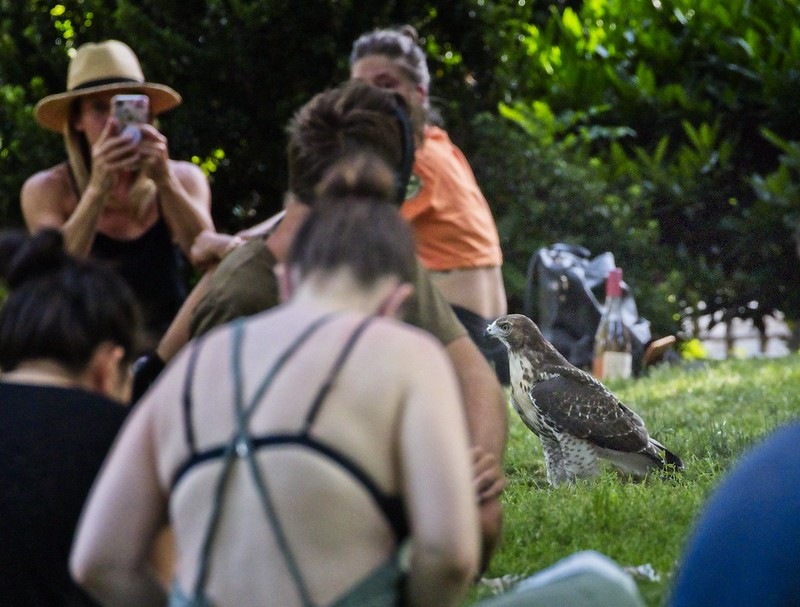 The fledglings (and Christo) often perch on the low fences in the park, placing them in close proximity to people. When this happens, please give them space. The person below was very excited the hawk was so close, but she is WAY too close to the bird. Not visible in the photo is the wall out of frame to the right and the cyclone fence in the background. The hawk was essentially penned in, without a means to safely fly away. 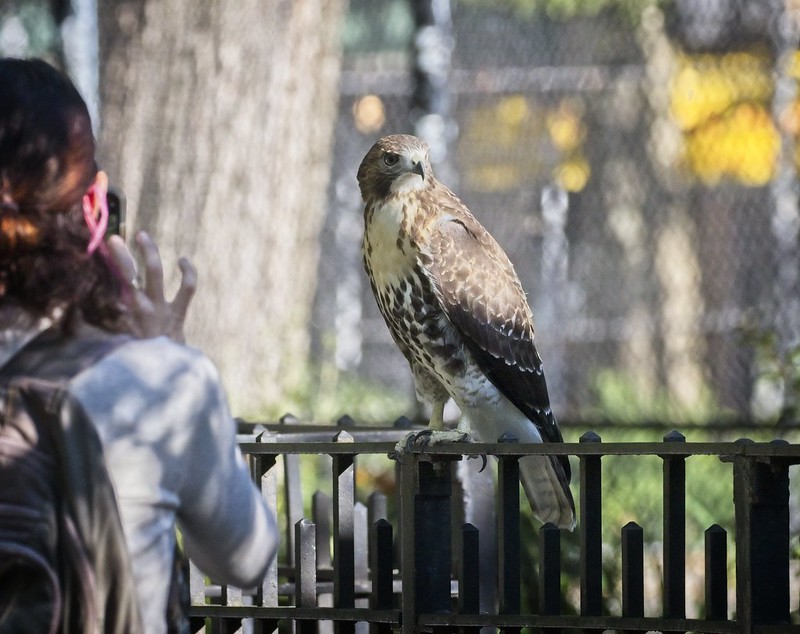 As summer sets in and more people are in the park, there may be more close encounters with the hawks. Please take care and be mindful of them. When they're playing on the grass, they're just fine (this is normal behavior) and when they swoop low and come close, just allow them to do their thing and enjoy the experience.
Posted by Laura Goggin Photography at 1:44 PM