Thursday hawks and a surprise visitor

I was met by Christo and Dora as soon as I entered Tompkins Square this afternoon.

Dora is on the left, Christo on the right. 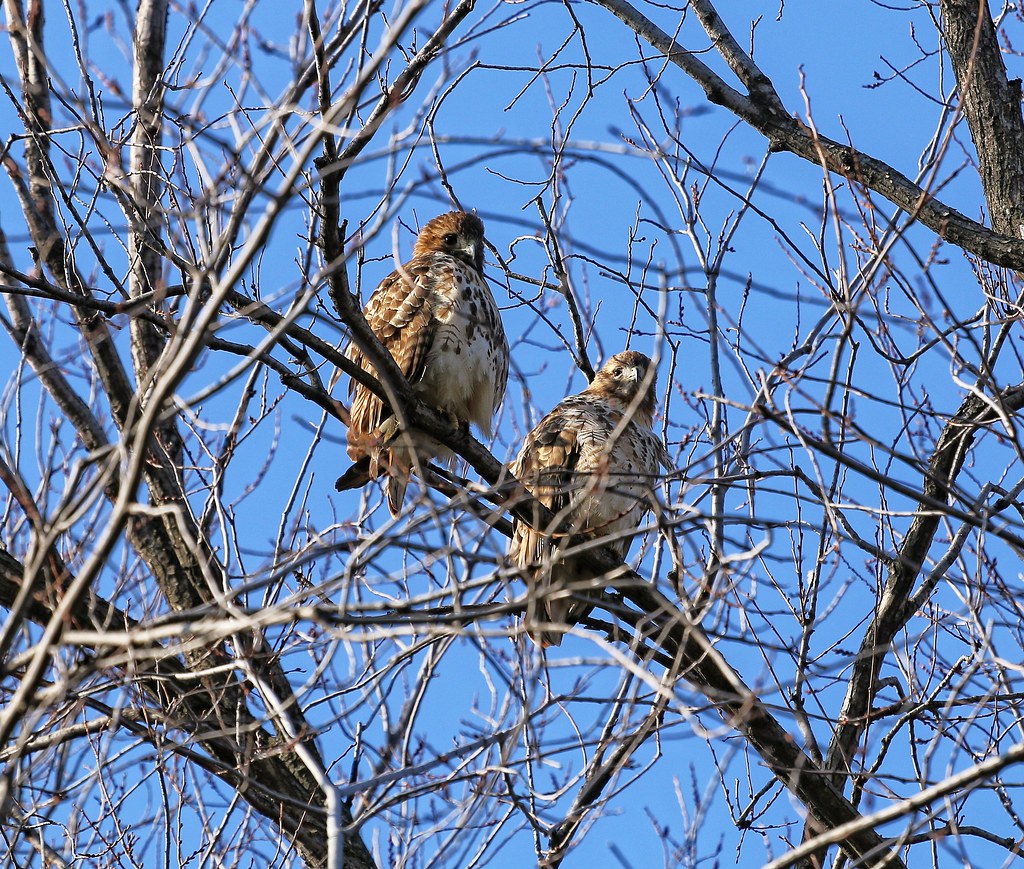 I got the feeling I was interrupting a quiet moment.  For the first time I can recall, Dora paid me a lot of attention.  She usually gives me a glance, but today, she kept staring and seemed to react to the sound of my camera.

She took off first, so I followed her as I don't get to see her up close that often.  She proceeded to lead me all over the park, making me run repeatedly back and forth between Avenues A & B.  Forget the gym, Dora is my new personal trainer!

She finally settled down atop the Boys Club on Avenue A & 10th Street, but didn't seem very interested in all the pigeons flying around. 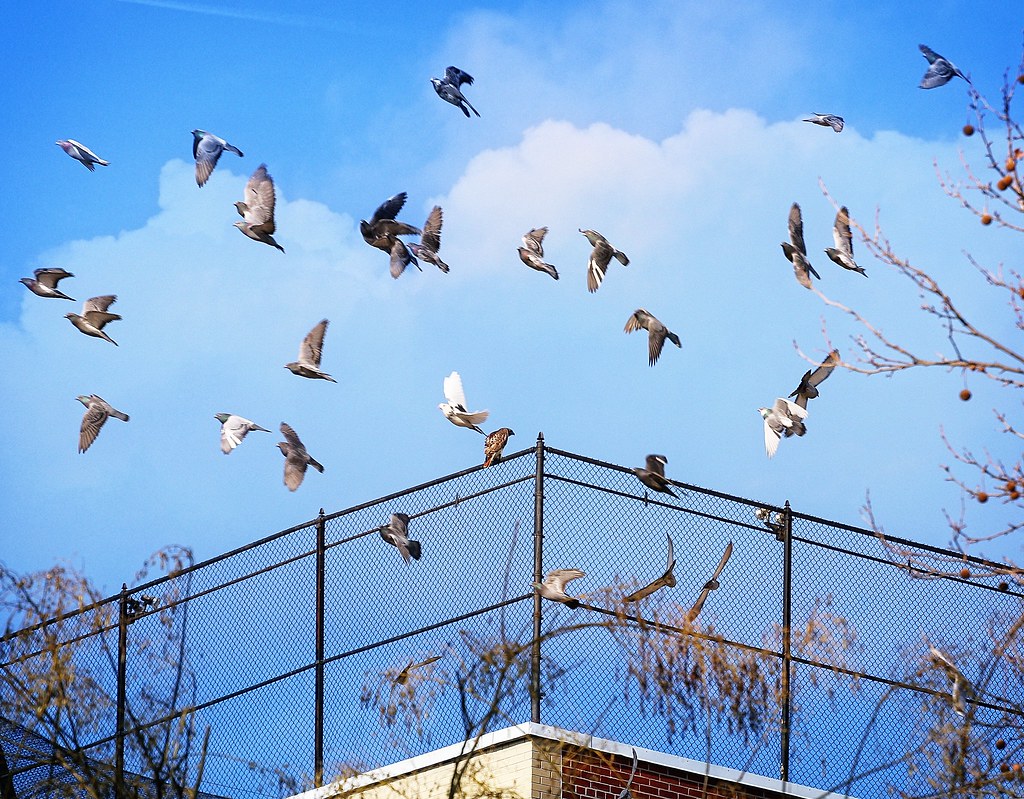 After a time, she took off soaring and I noticed both hawks were circling around a third bird that was passing over the park. 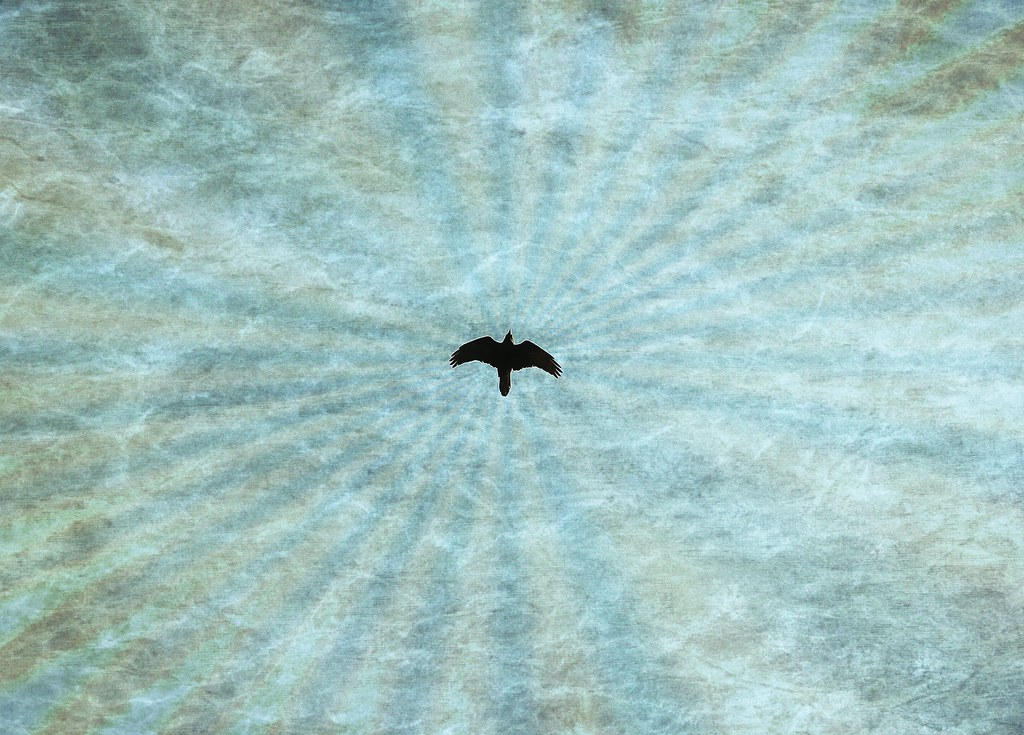 The hawks escorted the raven out of the park, west towards Broadway where it made a sharp right turn and seemed to dive towards Union Square.  I've only ever seen one other raven in the neighborhood, so I was really excited to see this.

A while later, the hawk pair reunited atop the Christodora building.  Dora is on the left, Christo on the right. 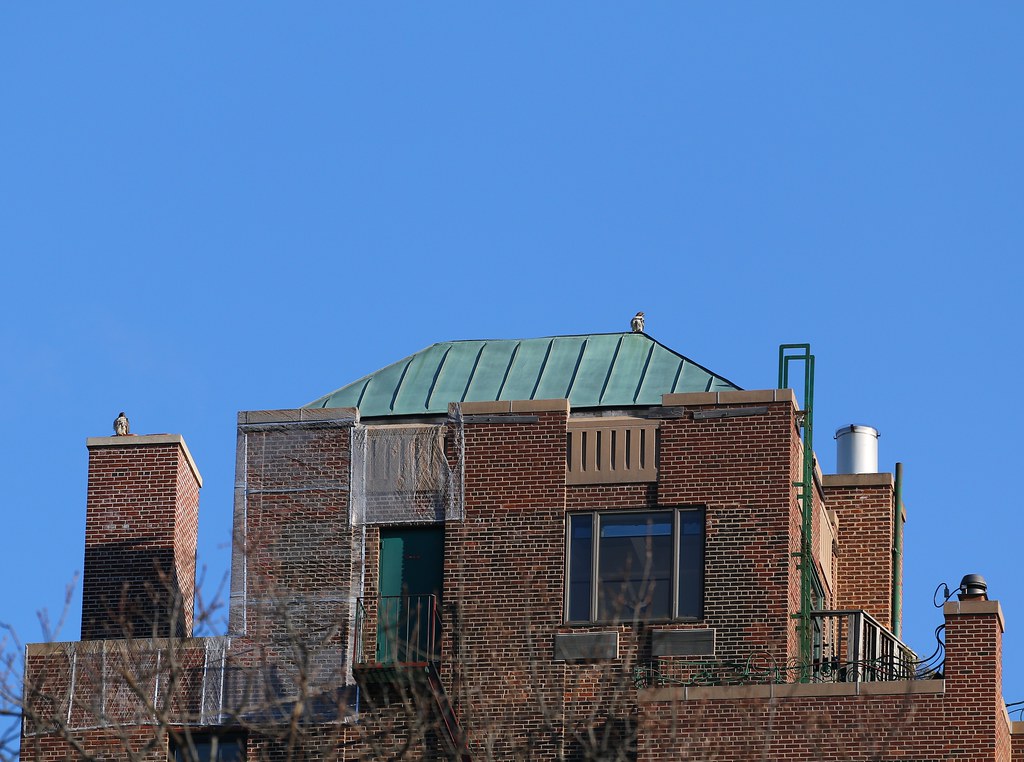 Christo twists his head all the way upside-down to watch Dora fly by.  I don't think any amount of yoga could enable me to do this. 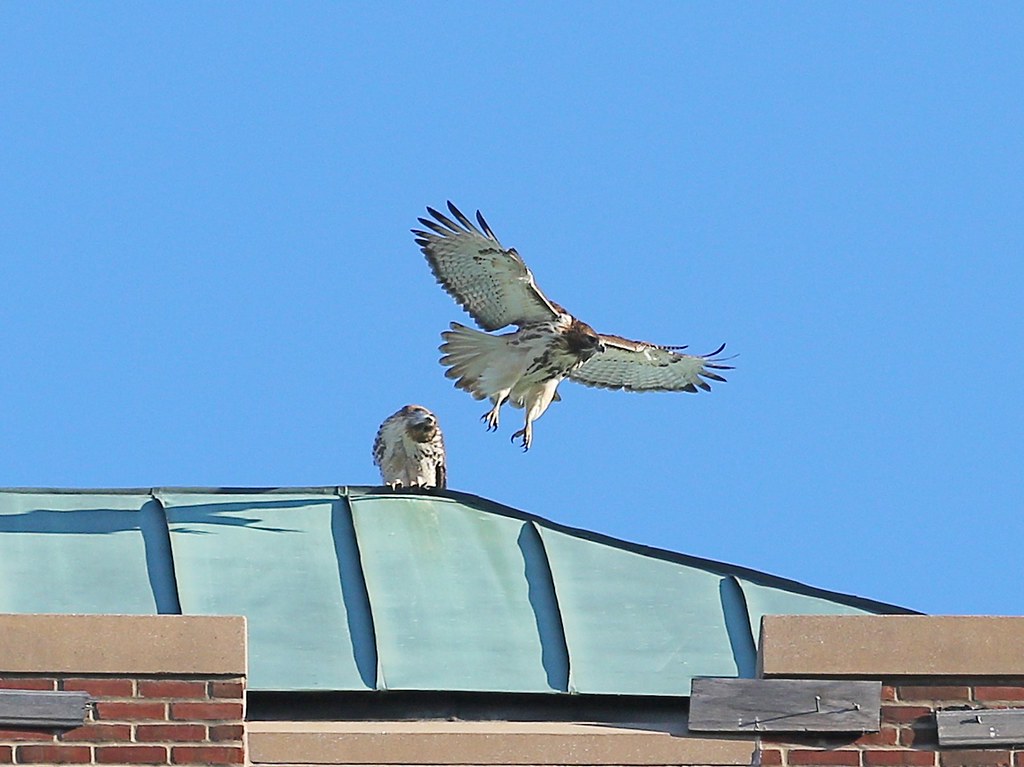 After four hours of flying around the park, Christo caught a pigeon and proceeded to eat it in the big tree near Avenue A &7th Street, where they'd been sitting when I arrived.  Dora sat patiently on an upper branch and watched him intently. When he was apparently done with half the meal, she swooped in and ate the rest.  I never saw her attempt to hunt herself.  If she is my personal trainer, then maybe Christo is her personal chef.

Dinner over, Christo took to a fire escape on Avenue A above Ray's Candy. 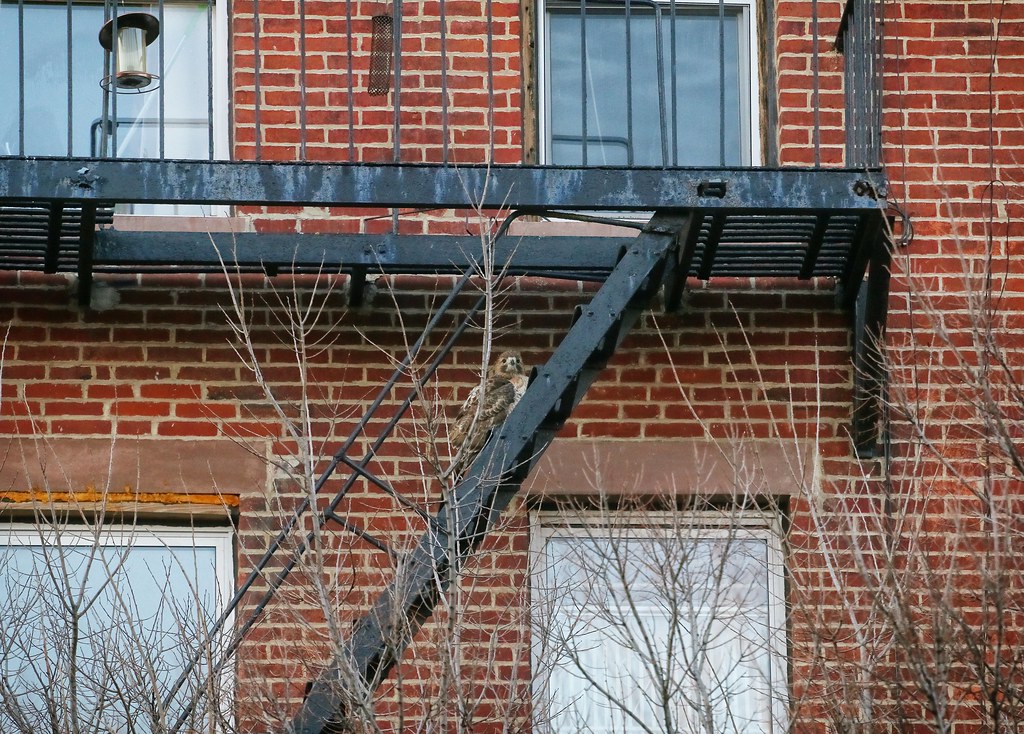 It looked to me like he was settling in to roost. 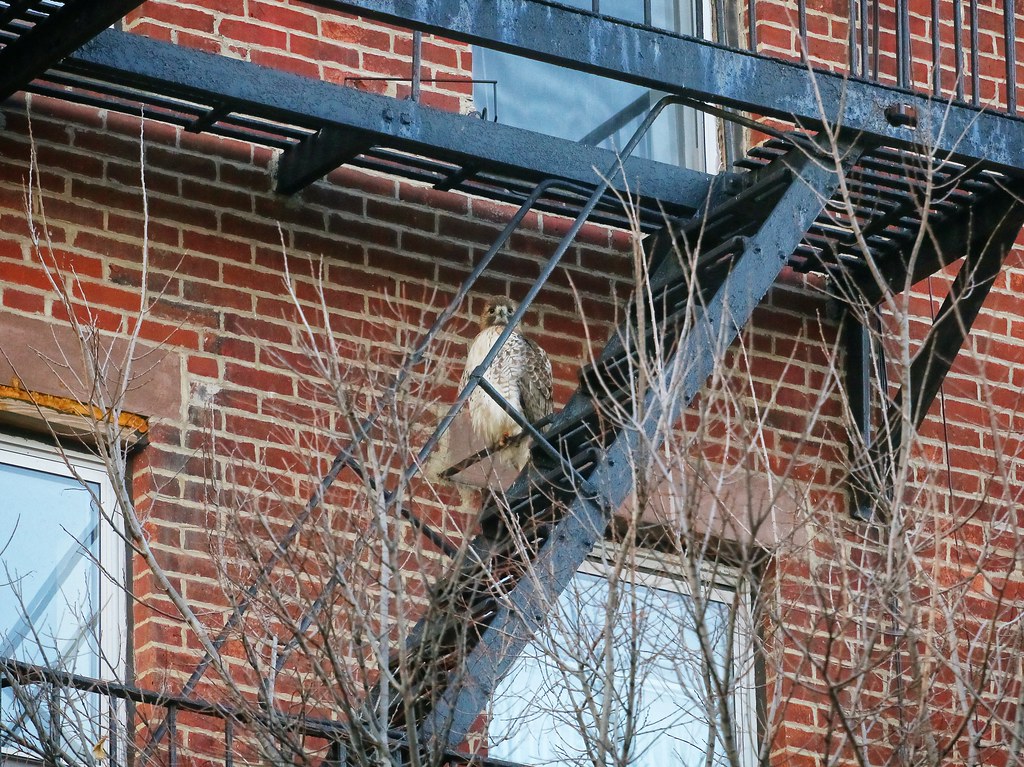 I had such a hard time walking away from him at this point, but the sun had gone behind the buildings and my hands were frozen. 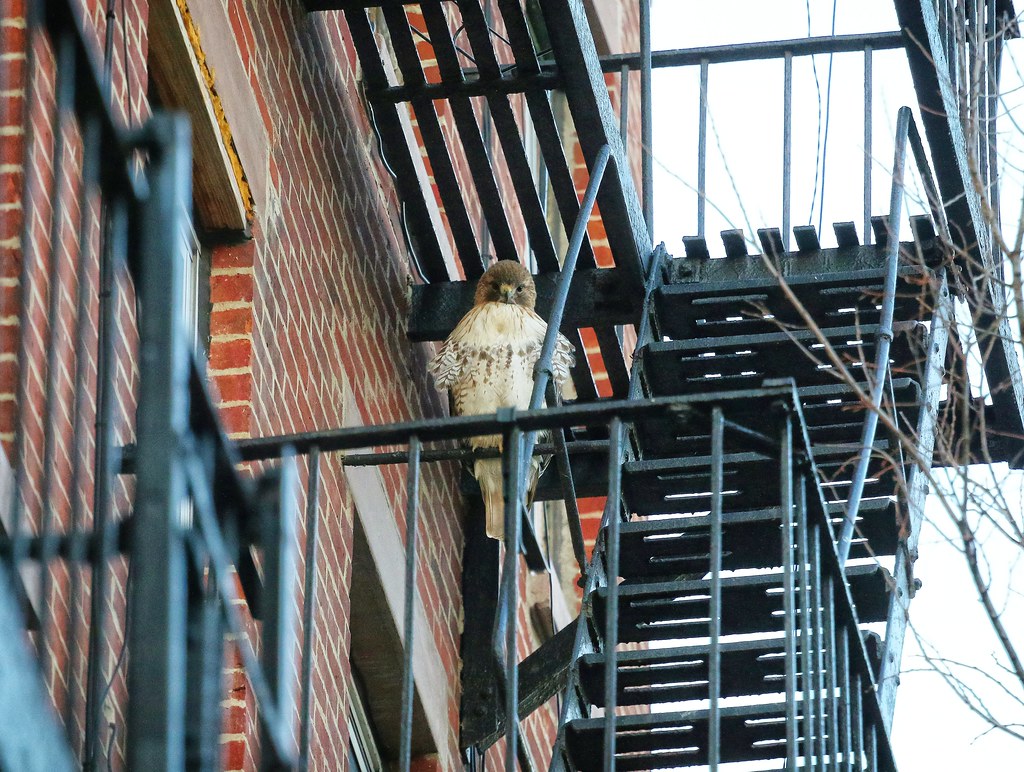 As I left him there, Dora perched three blocks up the street atop the cross of St Nicholas of Myra.